on March 28, 2010
This weekend I tried to explore all of  Whidbey Island in one day.  I ended up missing some places (Crockett Lake, for example) but had a great time...

The sunrise from Langley was beautiful.. 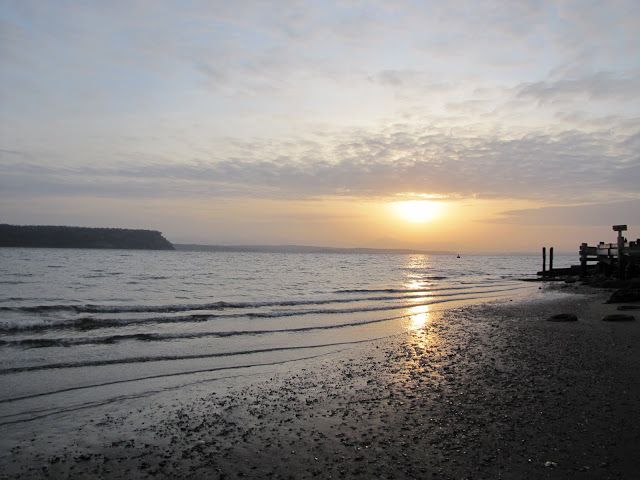 I was really hoping to see a gray whale but it never happened.

Instead there were some goldeneyes... 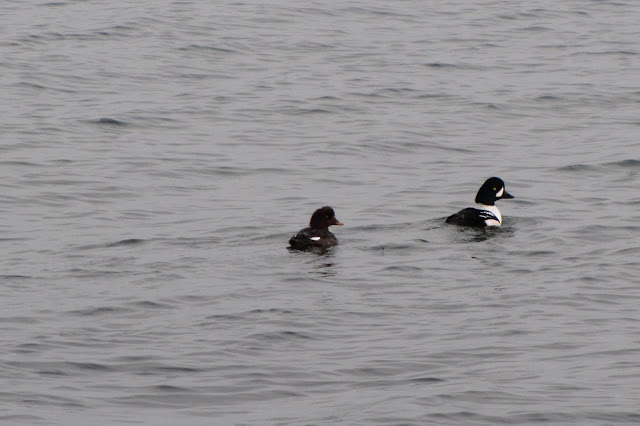 I believe these are Barrow's Goldeneyes..

Also lots of Bufflehead around... 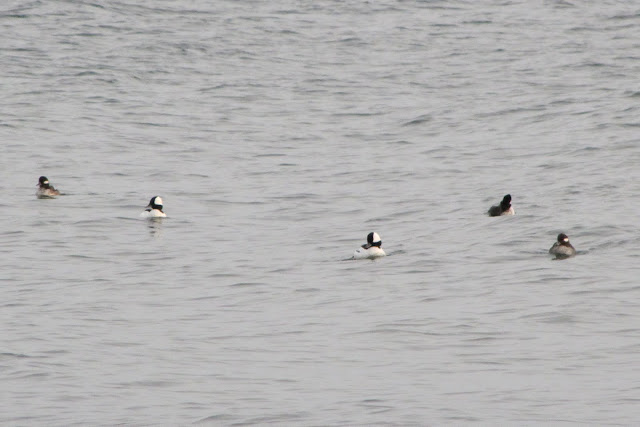 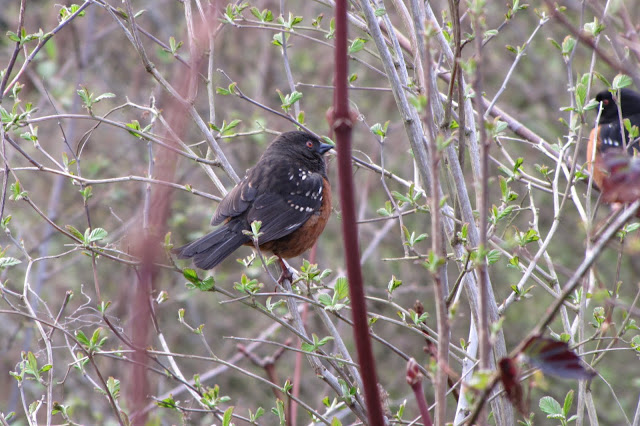 A couple of Spotted Towhees hopped around in the bushes overlooking Saratoga Passage.

Next I drove up to Double Bluff Beach.. 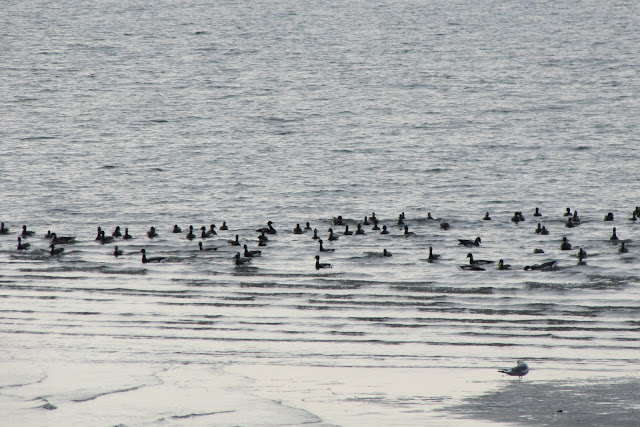 Almost a hundred Brants were swimming and walking around. 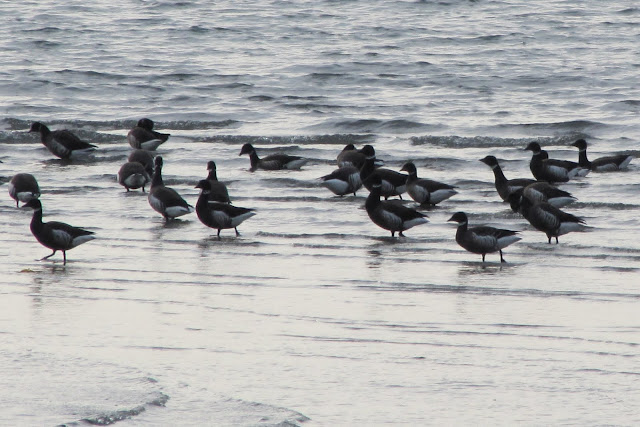 I had never seen them before so that was cool.

The next stop was South Whidbey State Park.  I took Jake for the the short hike through the forest to the beach.  There were tons of birds around, they just didn't want to be photographed.   A single grebe was swimming in Admiralty Inlet but he flew off. 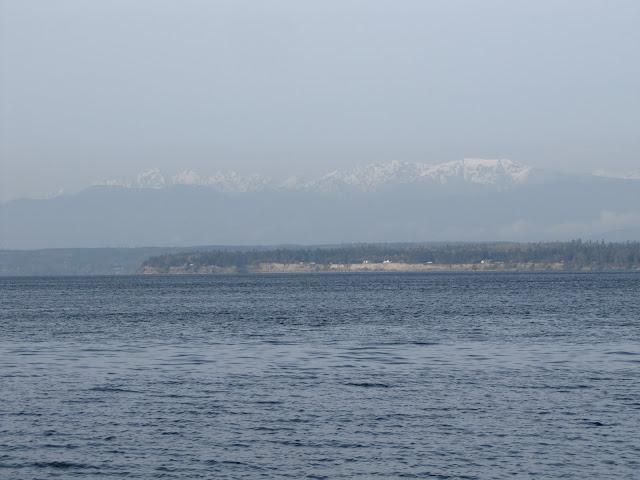 Pretty view of the Olympic Mountains...

Next up were several spots around Ebey's Landing National Historical Reserve. 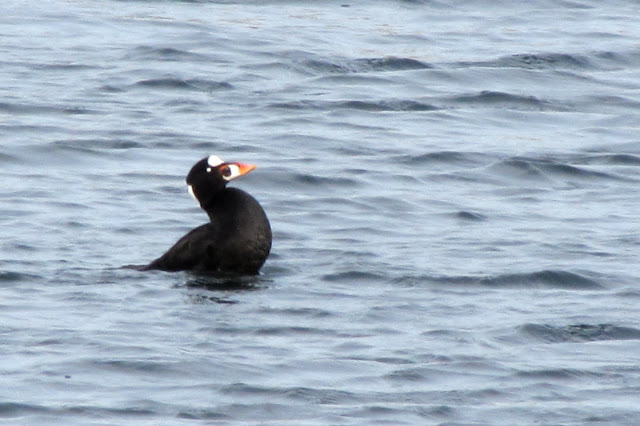 A couple of Surf Scoters.. 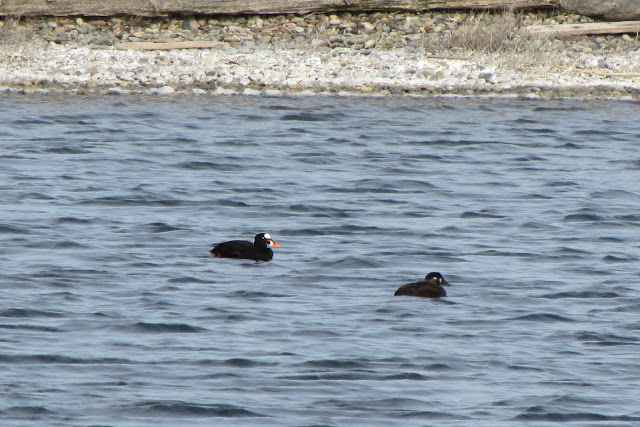 I turned around in a parking lot at the dead end of a road and this goose was NOT pleased.. 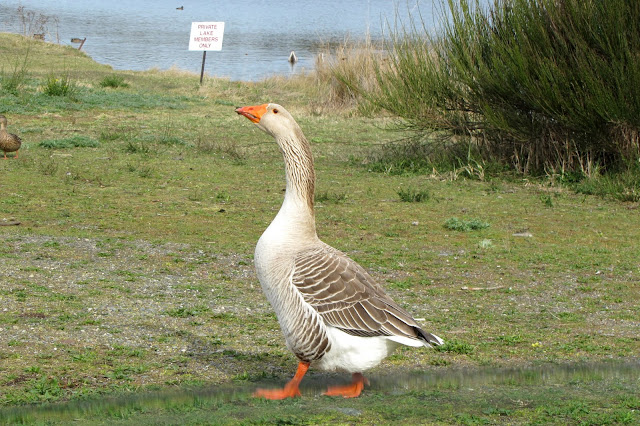 Jake was not pleased either.

Lots of swallows were tearing around the marsh and occasionally landing on the telephone lines.. 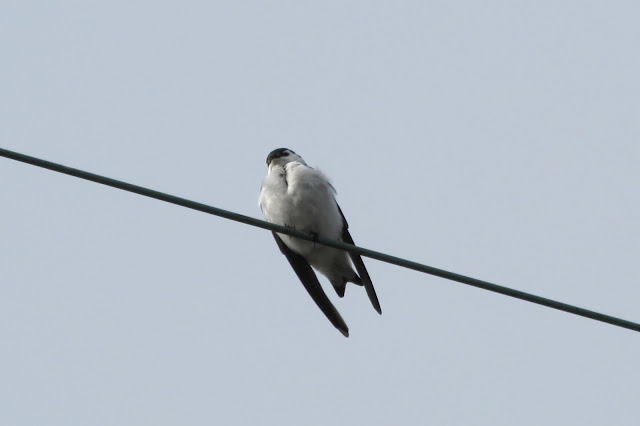 There were a few harriers flying around... 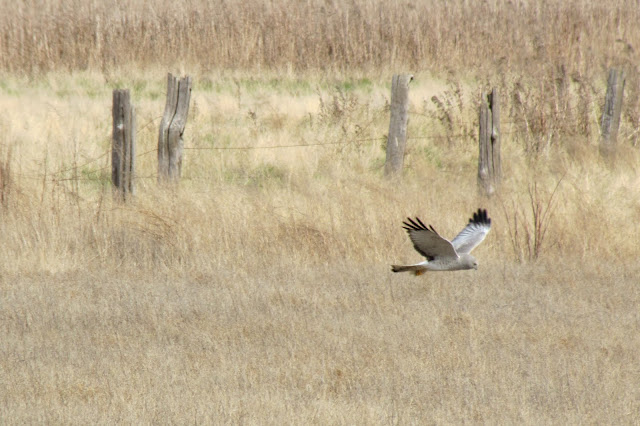 Across the street on the Saratoga Passage I watched a gull for a bit... He flew down to the water and picked up this orange thing.. 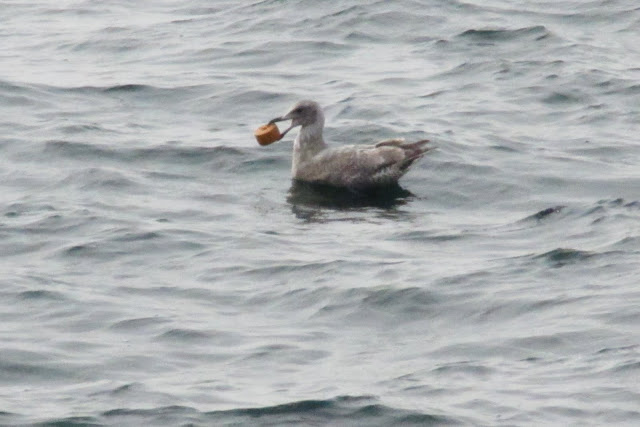 I don't know what it is (maybe something for fishing?) but the gull was determined to take it.  He put it down and picked it up several times and finally took off with it.. 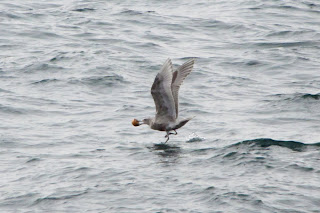 As soon as he took off another gull came over chasing him..  It seemed playful but maybe it was just in my head.. I would love to think that gulls have toys and fly around playing keep-away.

Back on the other side of the street (the marshy side), a crow was eating something kind of gross.. 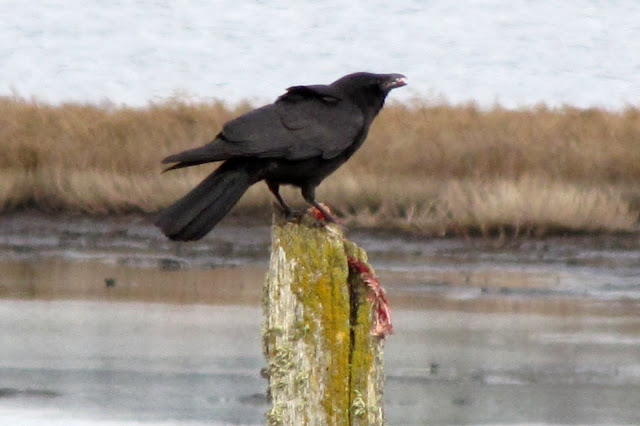 Beyond the crow were lots of little shorebirds... 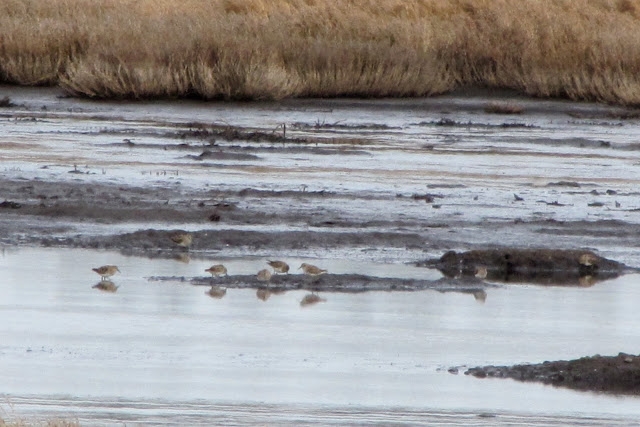 Some kind of sandpiper I assume. 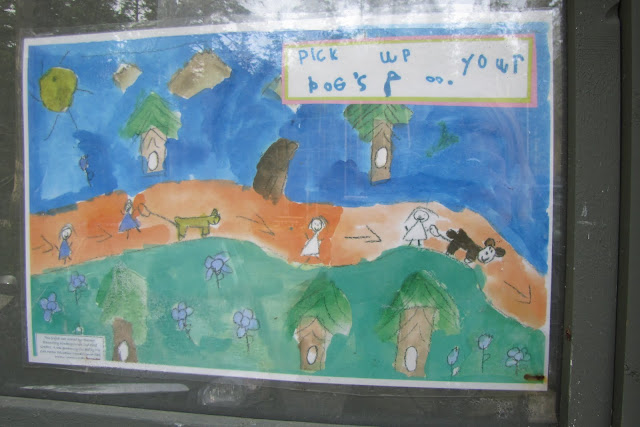 Pretty cute.  I think it said it was done by a kindergartener.

This bird would not be ignored: 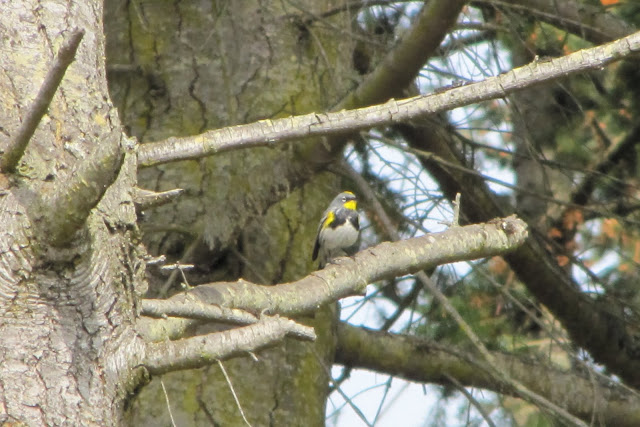 Such a pretty bird!  I think it's a Yellow-rumped Warbler (Audubon's). 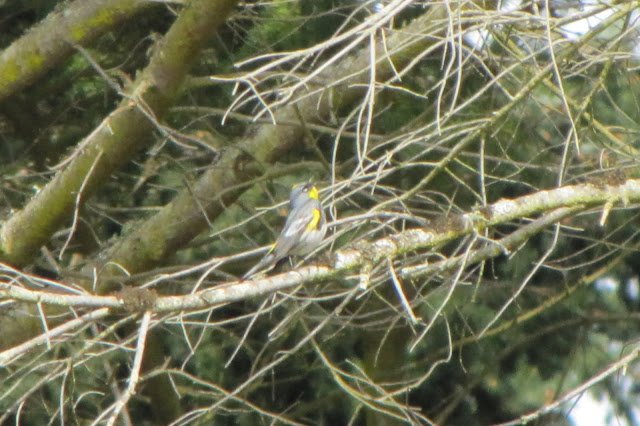 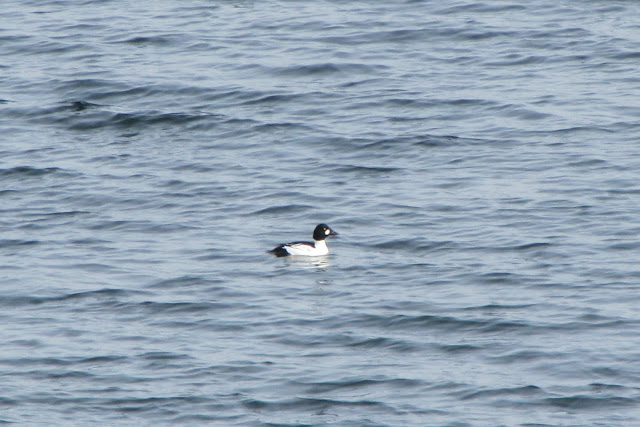 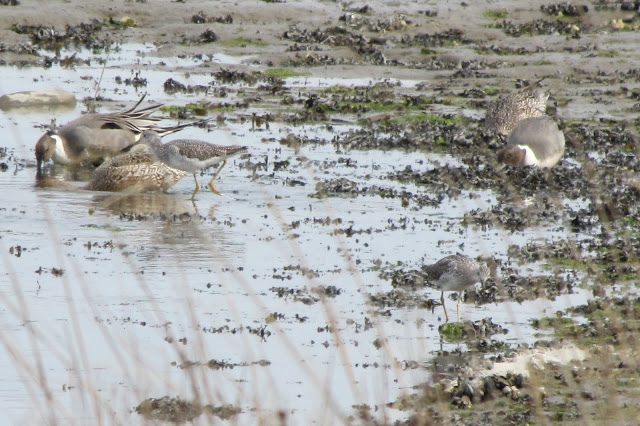 A couple of yellowlegs among the pintails.

My last stop was Deception Pass.  It was packed with cars and kids and dogs and I didn't have the patience for much more than a brief walk with Jake.