Man this was an awesome trip.   Ok I left off with leaving the Norris Geyser Basin... We quickly came upon a picnic area with lots of cars parked and people taking pictures. 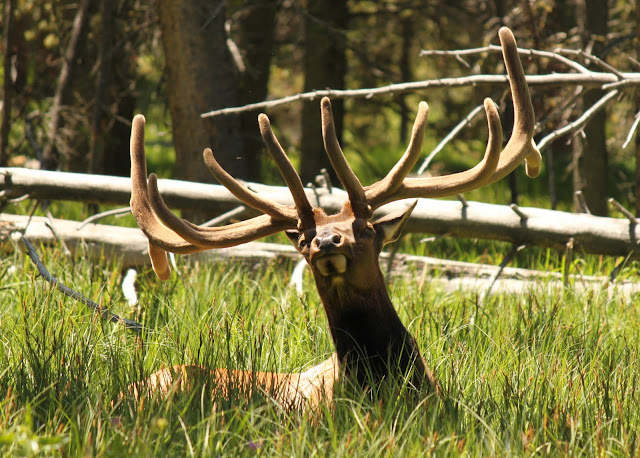 Some beautiful elk were resting in the grass across the stream from the picnic area... This guy reminded of this other guy:

There were three total hanging around.. 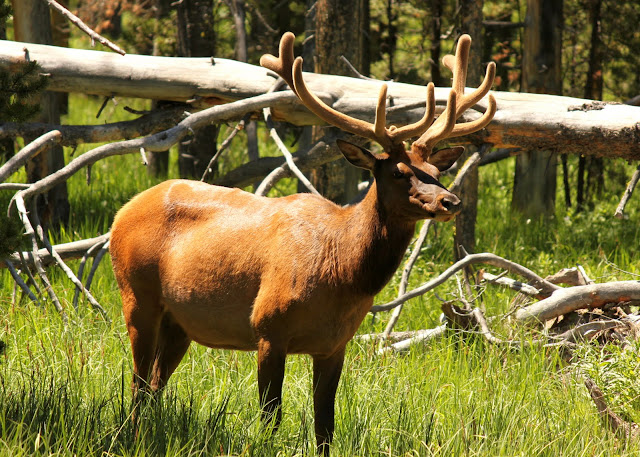 After some snacks at the picnic area we continued on to the Artists' Paintpots area. 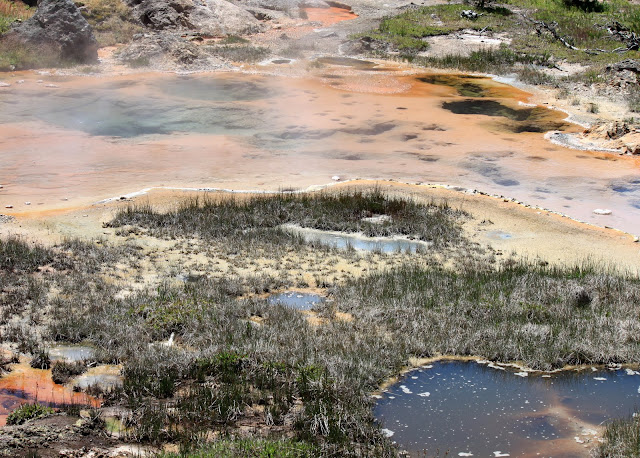 It was a really colorful area... 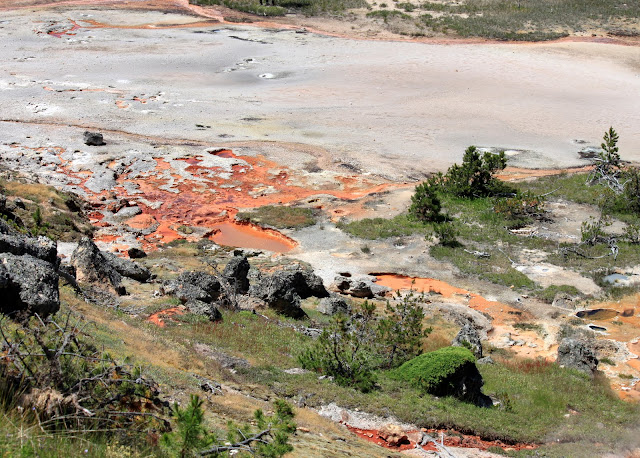 We returned to the Norris Geyser Basin afterwards to see the rest of it... 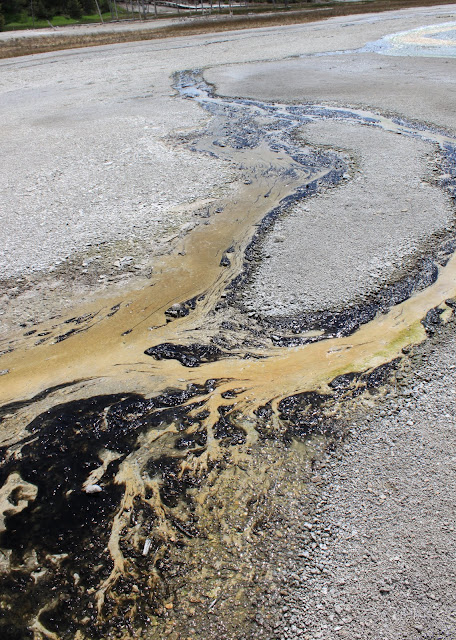 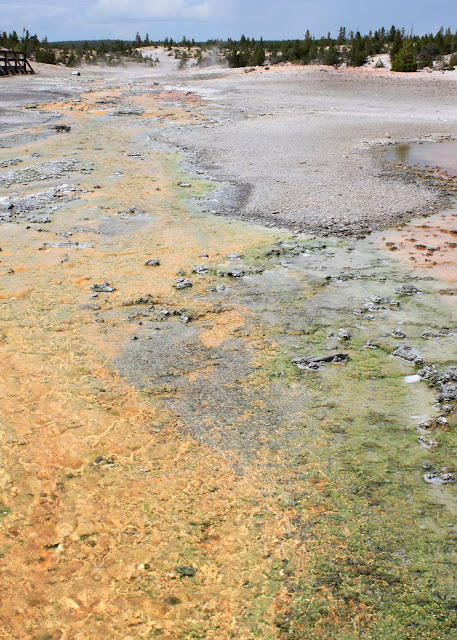 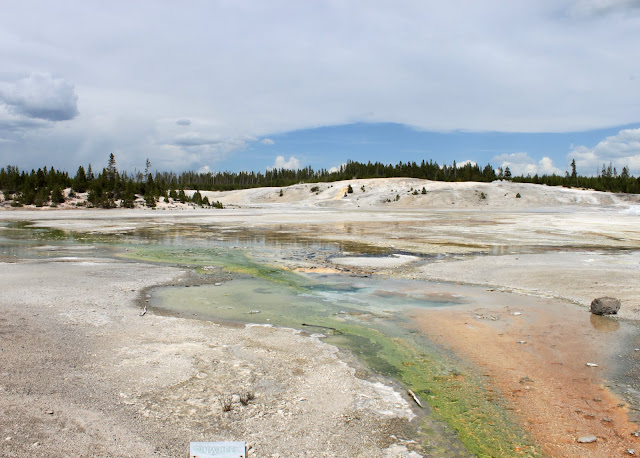 It was so pretty!  We returned to the Mammoth Hot Springs area and found some elk near our hotel... 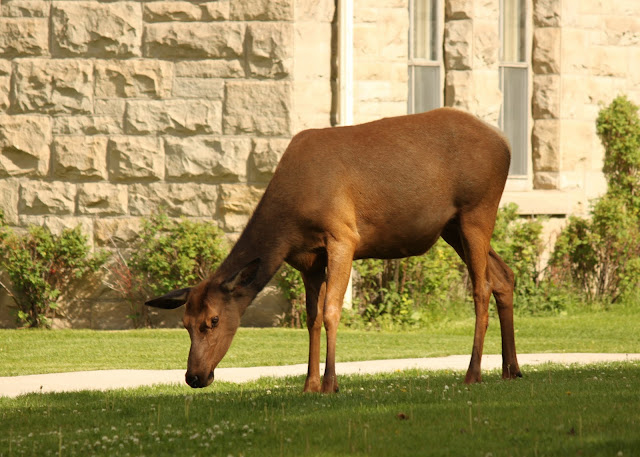 The next morning we got an early start on the Beaver Ponds Trail loop.  The beginning part followed a stream uphill. 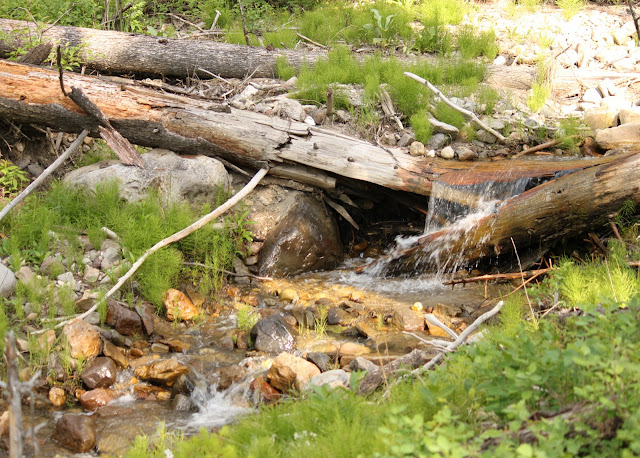 The trail wasn't too clearly defined at the start and we veered off course a bit.  There weren't any other people around so we were a bit concerned about bears.  We taught my nephew to yell "hey bear" regularly to avoid surprsing anyone...  We soon found these cool bones: 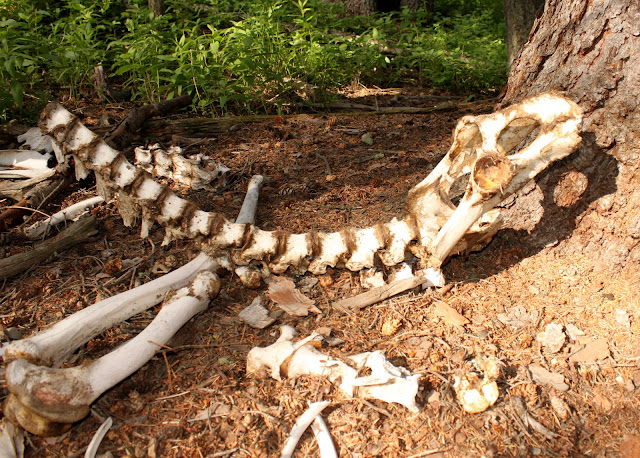 We were guessing they were from an elk because of all the elk droppings around but it could be a lot of things... 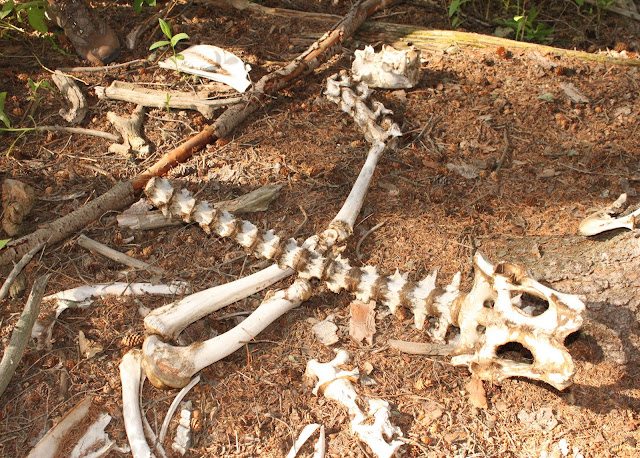 We continued to hike a faint trail we found hoping it was the right one.. We followed it up the side of  a ridge and found the source of all the elk poop.  A herd of maybe 40 or 50 elk were surprised to see us and jumped up from their resting spots.  They moved across the field to behind some trees.  We could still see them and they were staring at us.. The young ones were screaming in the most horrible way.  It was terrifying and exciting. 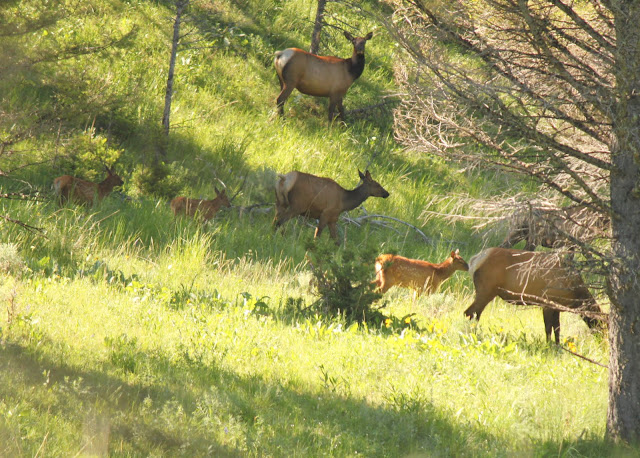 Eventually the herd mobilized over another ridge and we snuck up from another side to watch them pass.... It took forever... 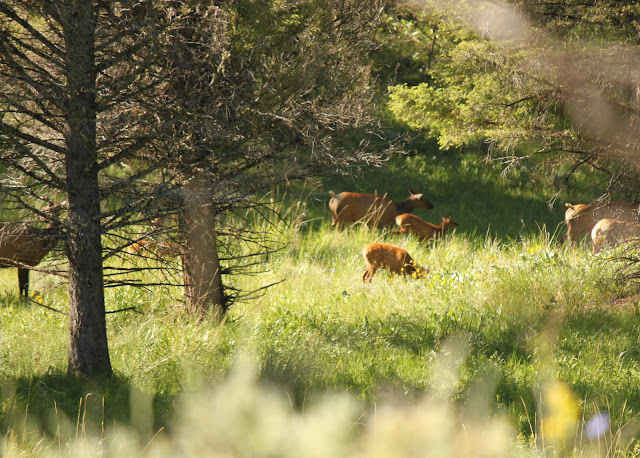 My photos from the experience aren't that great but you get the idea of how many were there... They just kept passing by in a very long train. And the young ones were so cute- I never knew they were spotted.  Near the elk were also lots of Chipping Sparrows. 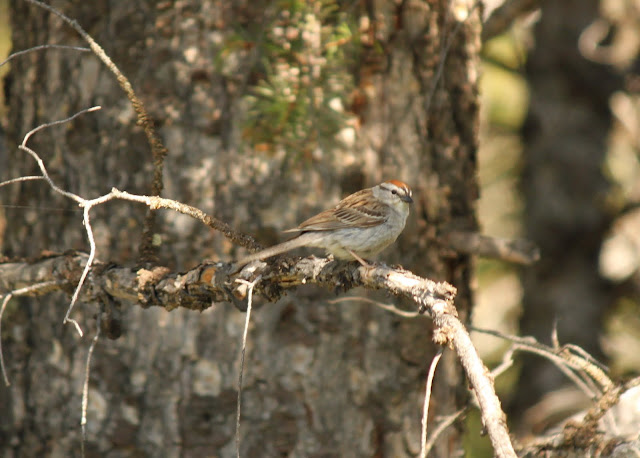 After this we were afraid the trail they were following was the trail we wanted to follow.  We made the decision to turn around for fear of surprising them again.  Luckily we ended up finding the correct trail and began the 5-mile loop. 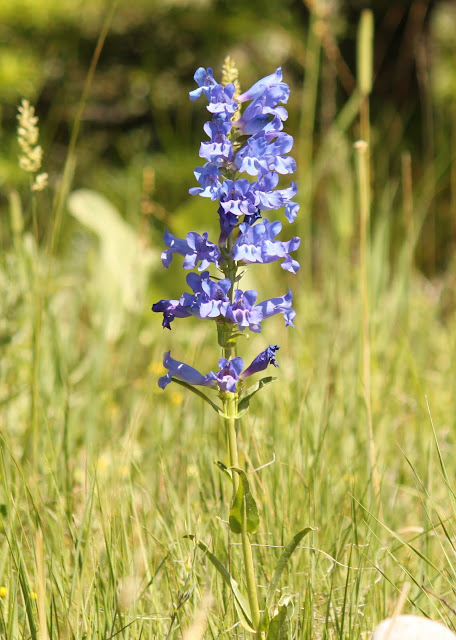 The trail led past some open sage meadows with gorgeous views.. 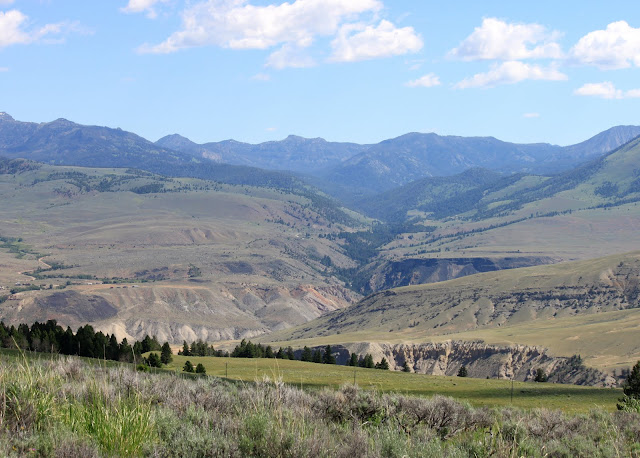 This little House Wren was singing his heart out: 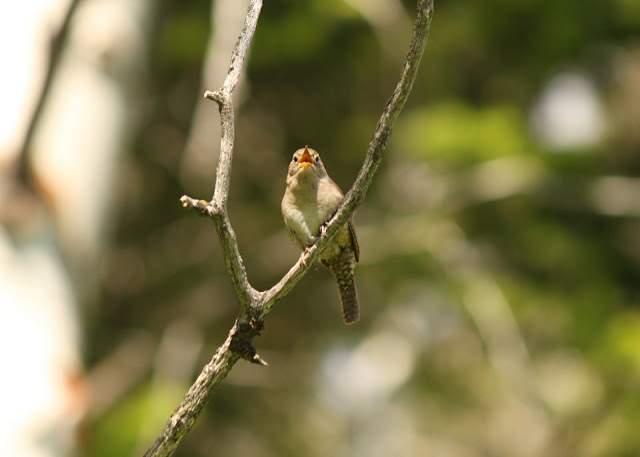 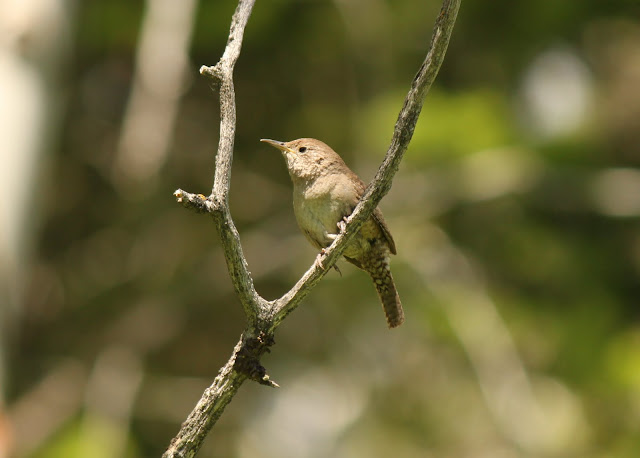 After awhile (and a LOT of mosquitoes) we reached the first pond.  I could hear the Yellow-headed Blackbirds long before we could spot them. 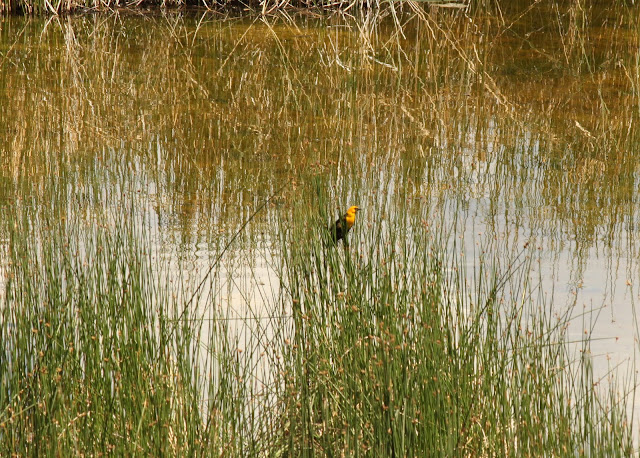 There were also several young coots around. 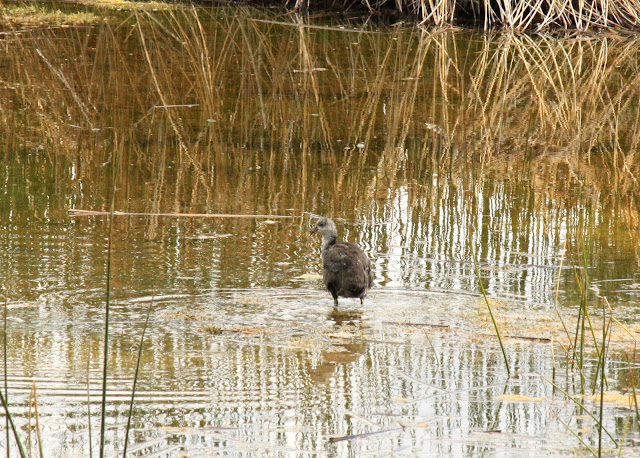 Soon we spotted a Pileated Woodpecker working on some fallen trees.. 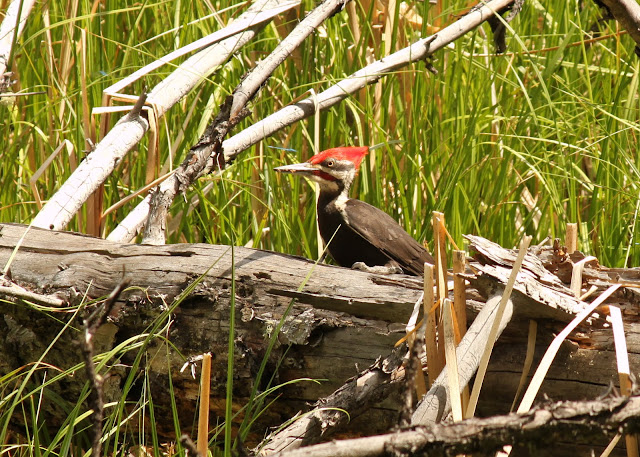 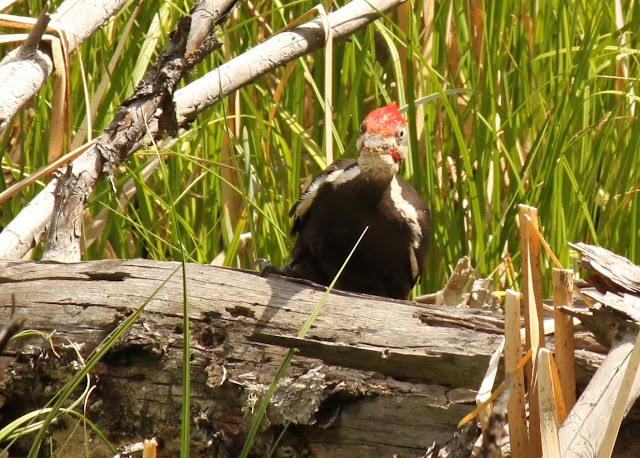 He's got a mouthful here.
In the next pond these two ducks were swimming: 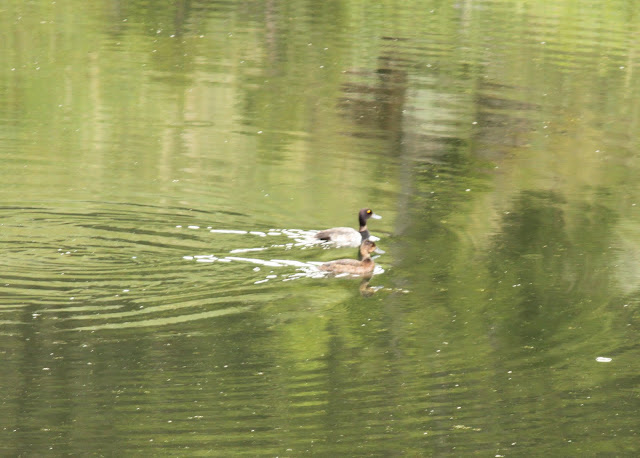 Lesser Scaups?  The weird neck ring is throwing me.
The rest of the loop had even more beautiful views... 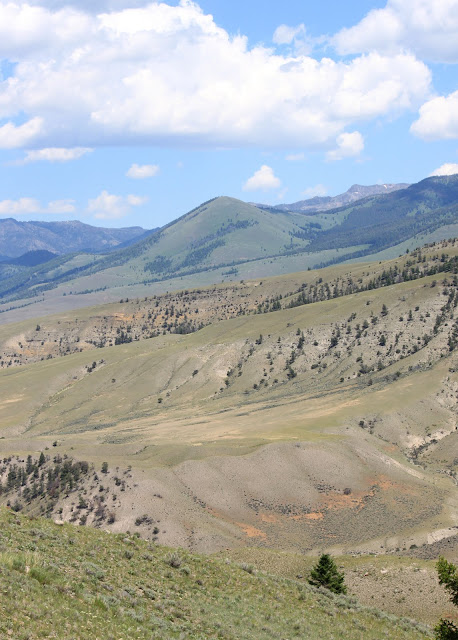 I startled this little bird in the sage: 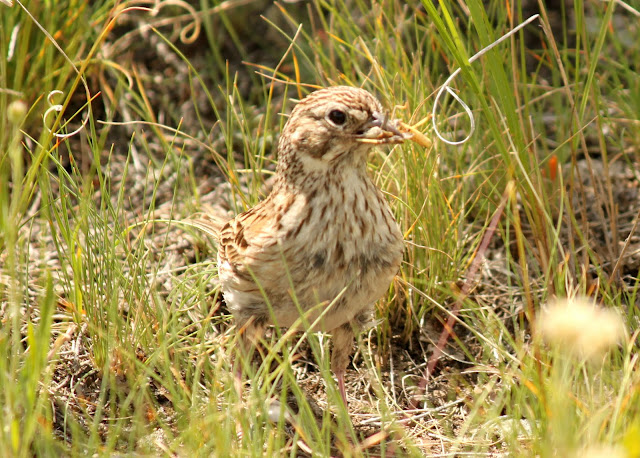 A Vesper Sparrow I believe...
This was a long and tiring hike but it made for a lot of great stories... One more post to come!
Email Post
Labels: American Coot Chipping Sparrow Elk House Wren Pileated Woodpecker Vesper Sparrow Yellow-headed Blackbird