One of the best things about having friends come to visit is doing all the stuff you never normally do, or have never even done before.  This weekend I took my friends from California to the Japanese Gardens (my first time) and the rose gardens in Washington Park.  Everything was pretty... 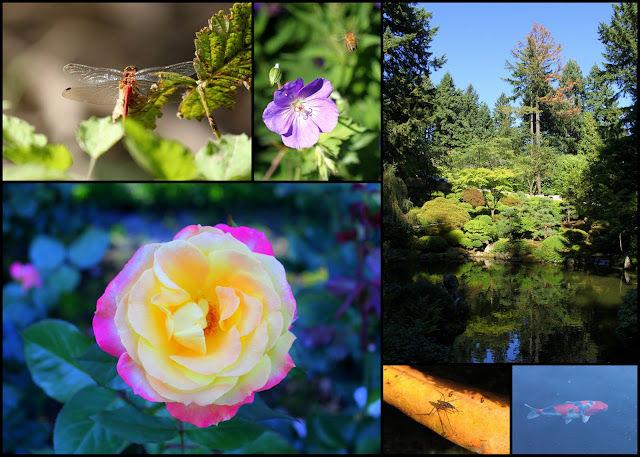 At the Japanese Gardens a Chestnut-backed Chickadee was splashing around in a stream: 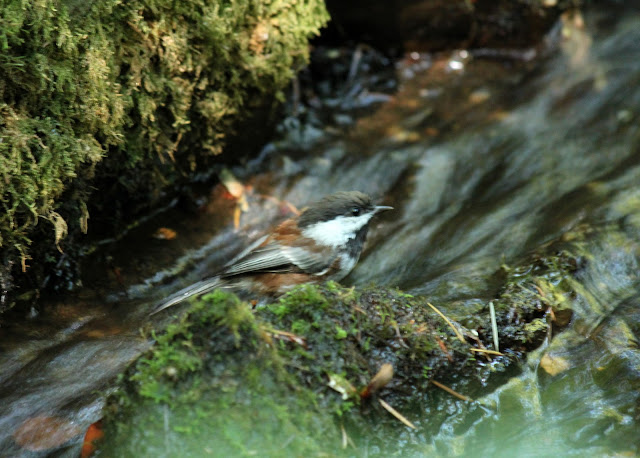 Right by the entrance to the gardens is a little fountain type thingy that birds just loved.  Unfortunately I scared most of them away by flinging my lens cap at them.  But before I did that, I saw a Brown Creeper sit still for a second!! 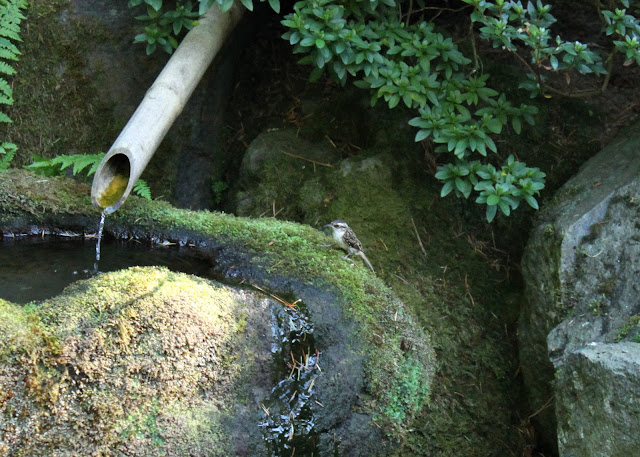 Also at the fountain were CB and BC Chickadees, a Red-breasted Nuthatch, and a little squirrel.  That evening after a vegan vacation at Apizza Scholls (worth it!), I took my friends to see the Chapman School Vaux's Swifts.  We got there just in time for the end of the show, but it was probably the most exciting show I've seen... Also the most crowded.

Here's a bad photo of the awesome swirling action: 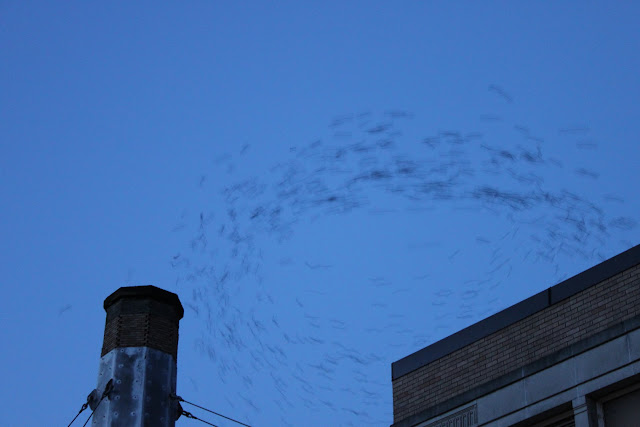 At one point a Peregrine Falcon swooped in and (I never thought I would say this about a bird-watching event) the crowd went wild.  Serious screaming and cheering and clapping.

Yesterday morning/afternoon my friends were getting some tattoo work done so I had some free time... Decided to head up to Tacoma to see if I could find the "megararity" Black-tailed Gull.  I did not.  I had to leave at 1:30 and it hadn't shown up, but I saw on Tweeters that it was there by 2:30.  Grr...

Don't worry, I saw lots of other things! 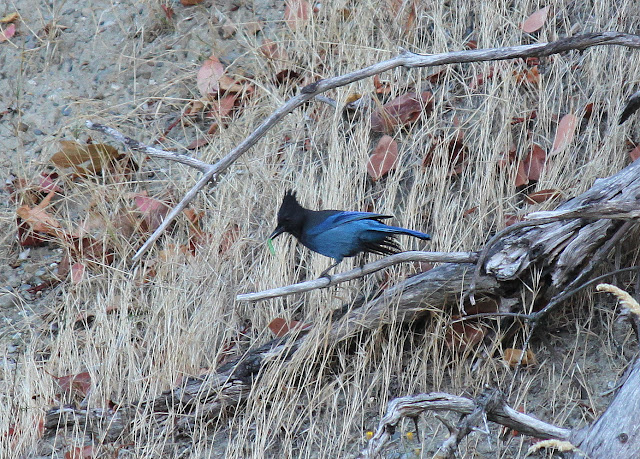 At Dash Point State Park there were hundreds of Bonaparte's Gulls... 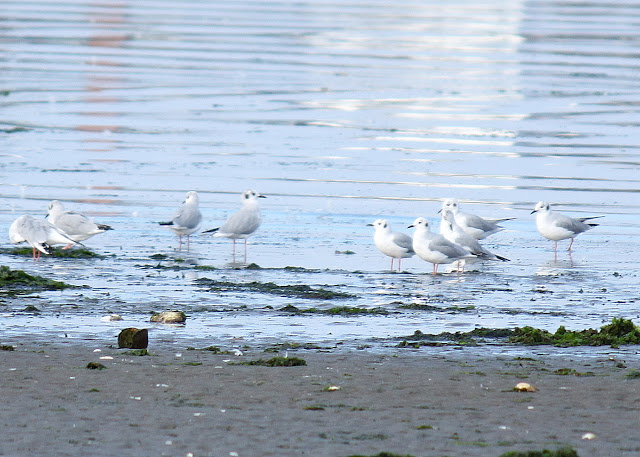 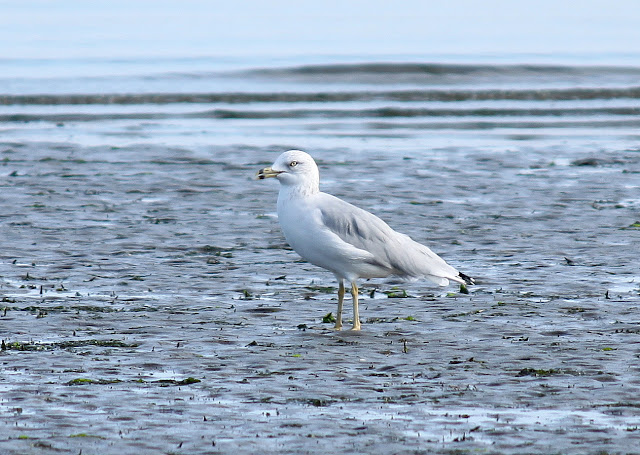 I liked the size comparison between the Bonaparte's and the, uh, other gull... Herring? 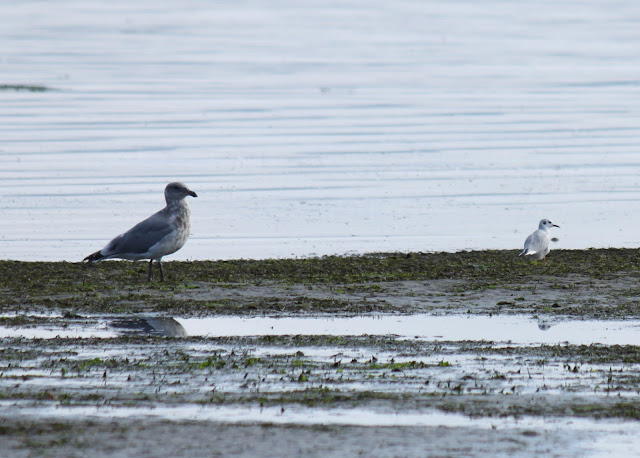 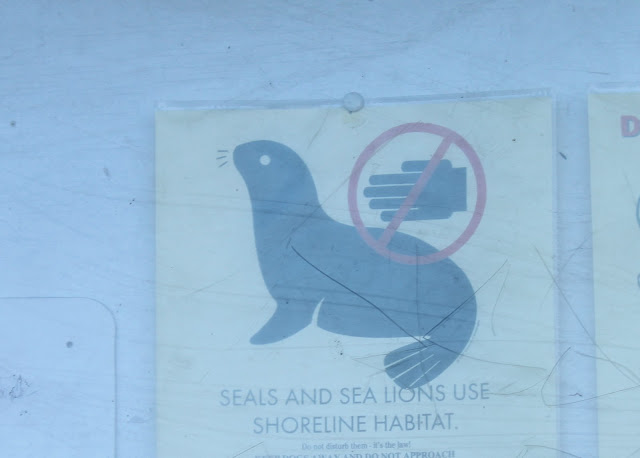 2. I found my first intact sand dollar on the beach!!
3. And this orange fuzzy caterpillar in the parking lot: 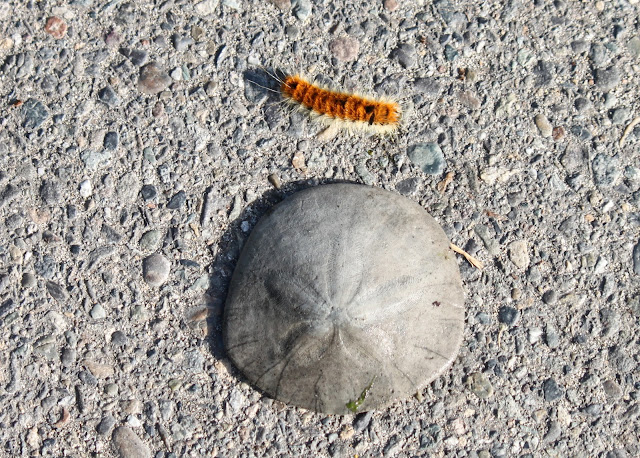 My next stop was the Dash Point Pier which was filled with fisherpersons.  I could see why: 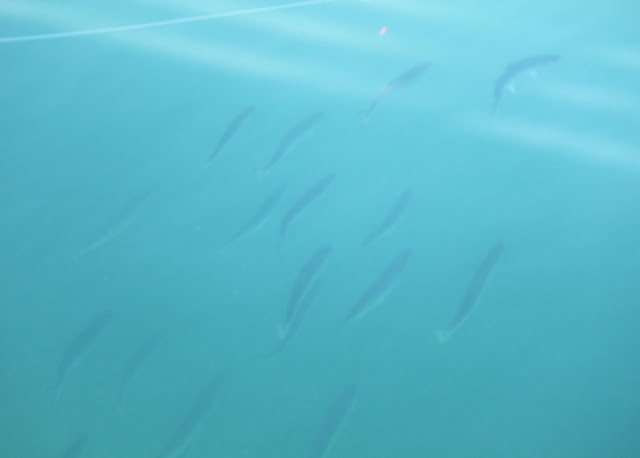 Here there were many more Bonaparte's Gulls as well as several fly-by Heermann's Gulls. 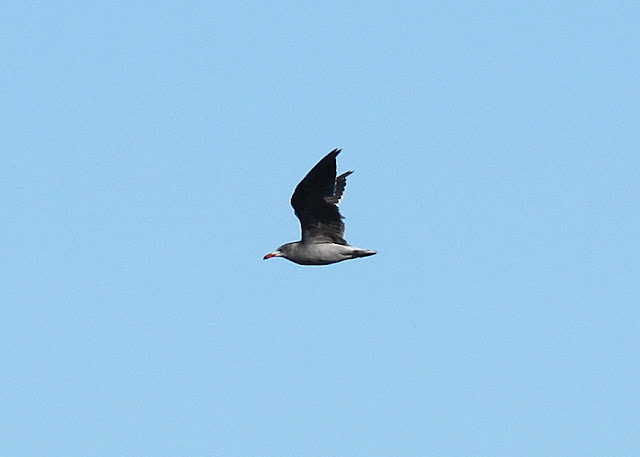 A flock of Common Mergansers also flew by at one point... 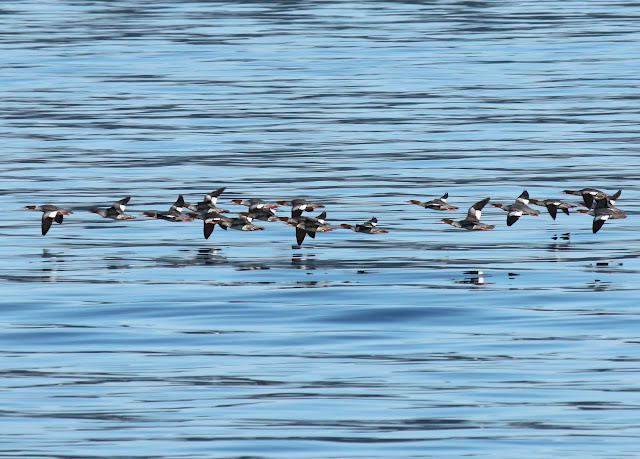 While watching the Bonaparte's Gulls out on the bay I realized that one of the birds was not like the others... 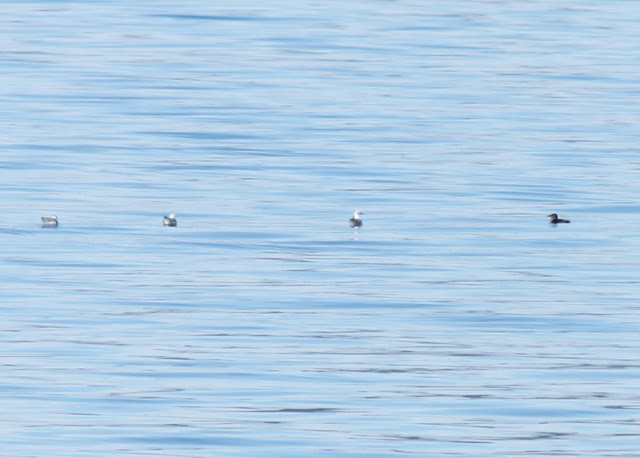 Ooooh because it was a Rhinoceros Auklet!!  My first one not at the coast aquarium!  It was soooo far away but I think I am finally motivated to drop some change on a scope.

There are several pull-outs along Highway 509 to view Commencement Bay from, and at one a couple of Belted Kingfishers seemed to be arguing over who was the king of the pilings. 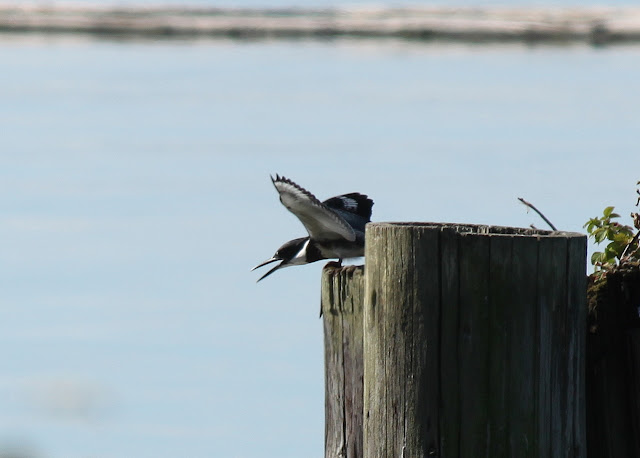 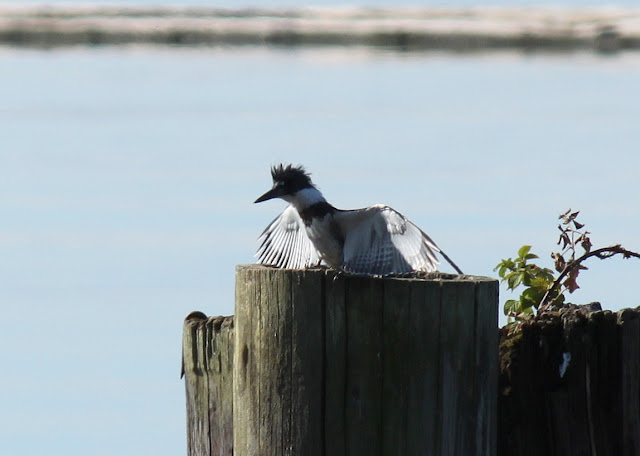 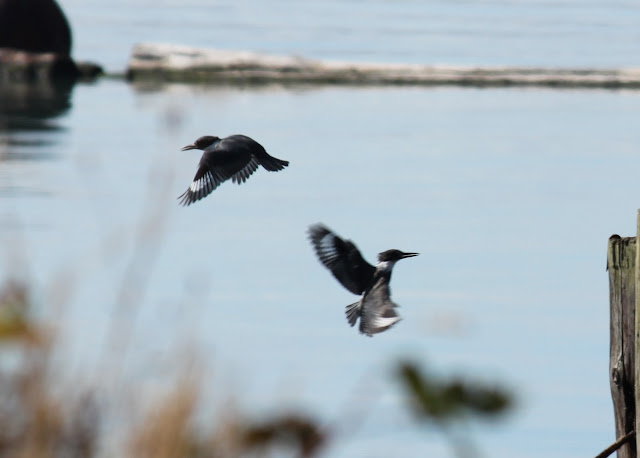 My last stop before leaving Tacoma was back at the pull-out where I had started the morning... Talked to some nice birders who pointed out a Common Tern and some Black Turnstones on the logs where the Black-tailed Gull liked to make appearances.  Here are the turnstones: 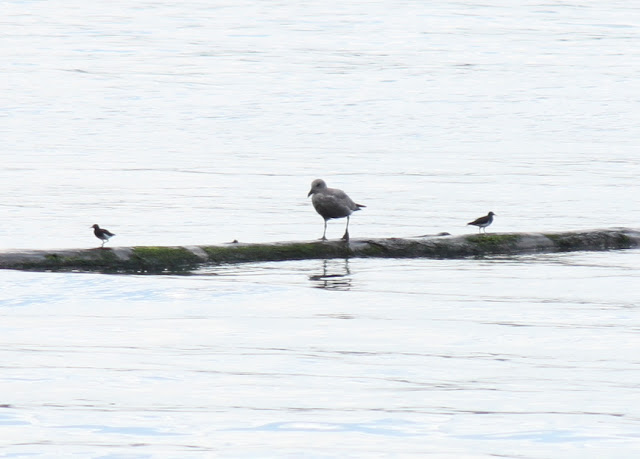 Oh well, it was still fun to explore Tacoma which had previously been known to me as the gross and smelly (lots of lumber mills) place where I happened to spend 9-11.  But now I know a much prettier and more interesting side to it.  So there's that.

Yesterday evening after dinner at the Vita Cafe, my friend and I took her son, Levi, for a walk along the waterfront.  We strapped my GoPro camera to him and man did he take some rad photos.... 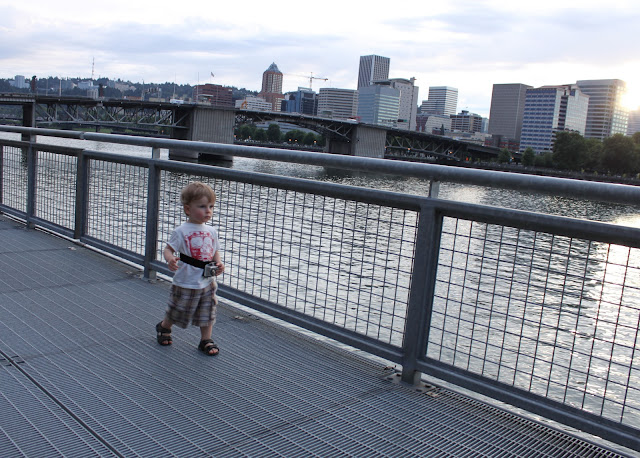 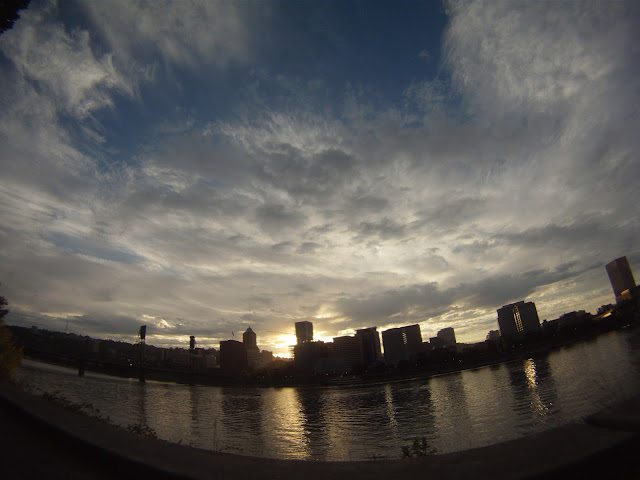 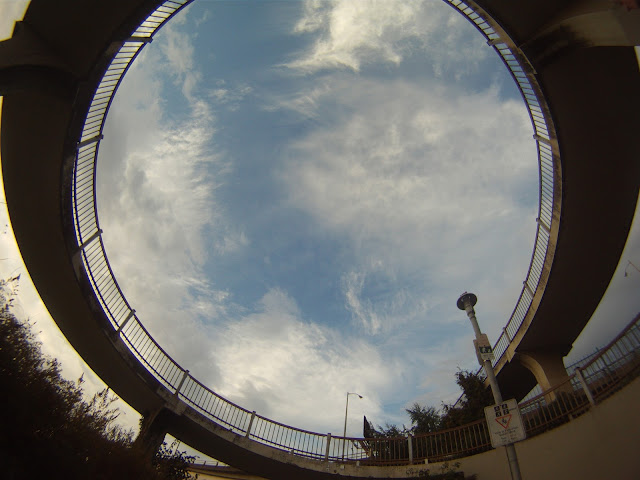 Bike ramp to somewhere I forget, by Levi