I drove up to Ocean Shores on Friday afternoon because I wasn't sure if I'd have another chance to see the Snowy Owls before they leave.  Plus I wanted another shot at the King Eider.  I caught a gorgeous sunset over Grays Harbor on my way in... 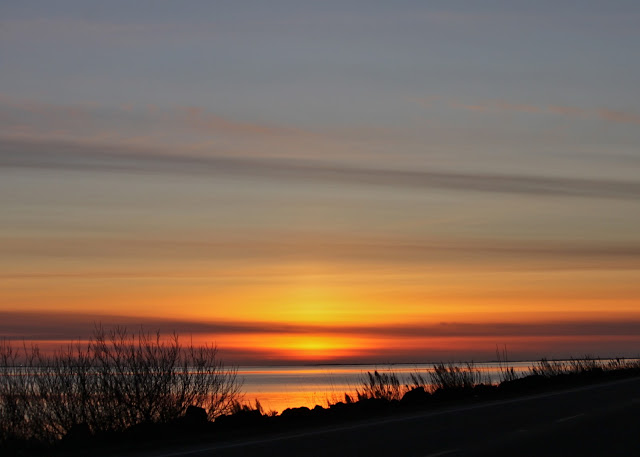 I got a room at the Sands Resort which is just a big motel.  I wasn't expecting much, but everyone working there was super nice, the room was clean (and moose-themed), the cable worked, and in the morning someone above my room was throwing food out their window to some deer and gulls. 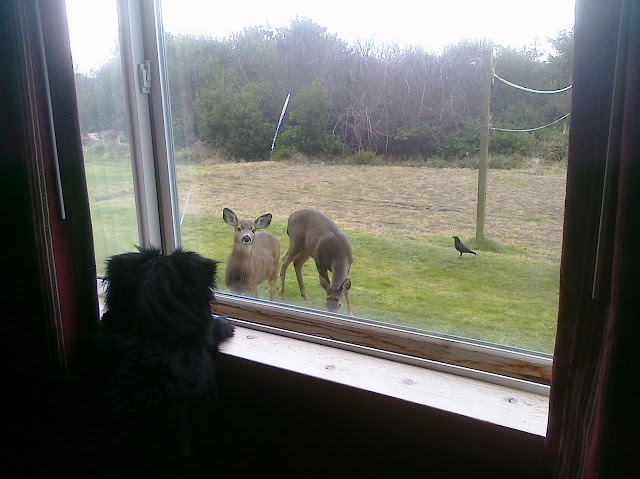 If only that elderly couple in the next room hadn't gone out drinking and come back to argue from about 2 a.m. till I got up at 6, the place would have been perfect.  Anyway.  So I got up early and arrived at Damon Point around 7:30 a.m.  As I had hoped, the owls were still relatively active and getting settled for their day.  Same with the photographers. 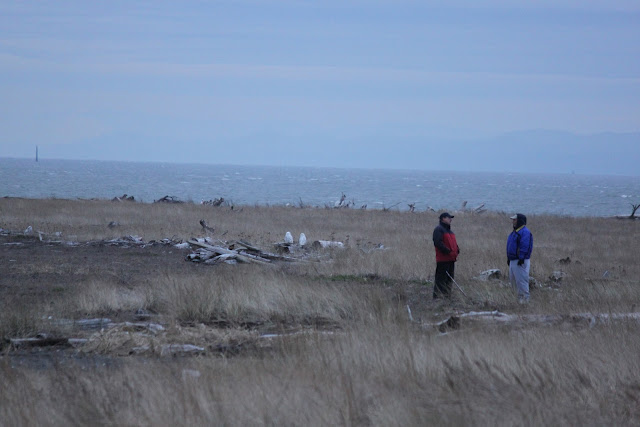 Hmm, it was also pretty dark.  I walked towards those two dudes slowly because it seemed like owls were appearing constantly.  I have no idea how many I saw.  It felt like dozens, but probably ten?  One owl just couldn't decide where it wanted to sit and changed spots several times (not because of people from what I could tell).  It landed near me at one point I took a few photos before he took off again and flew right. at. my. face. 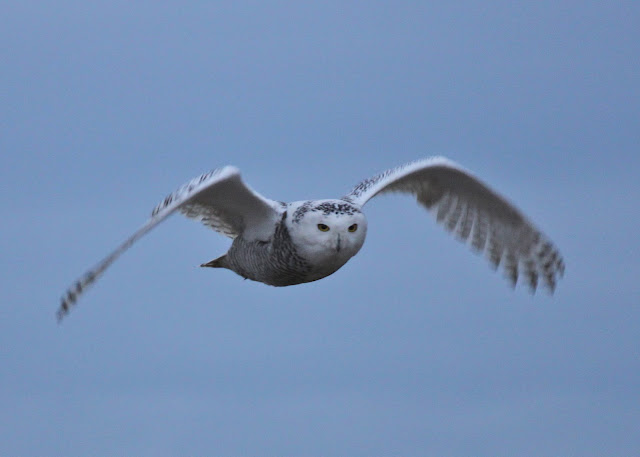 I was not expecting this.  This was my only clear shot because I kept peeking above my camera to make sure he wasn't going to smack me upside the head or something.  My last shot, though fuzzy, is pretty cool. 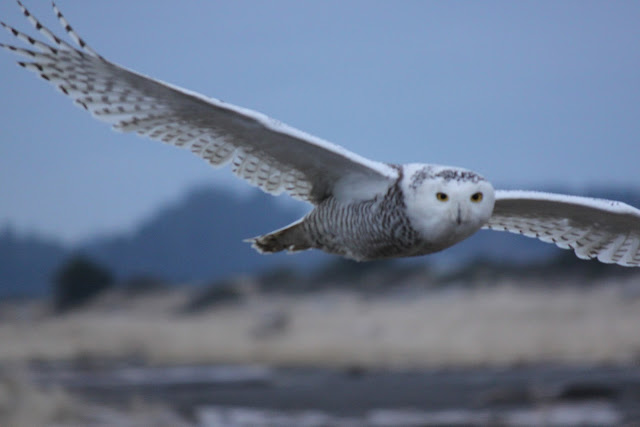 Here are a couple more flight shots (since on my last visit they never budged)... 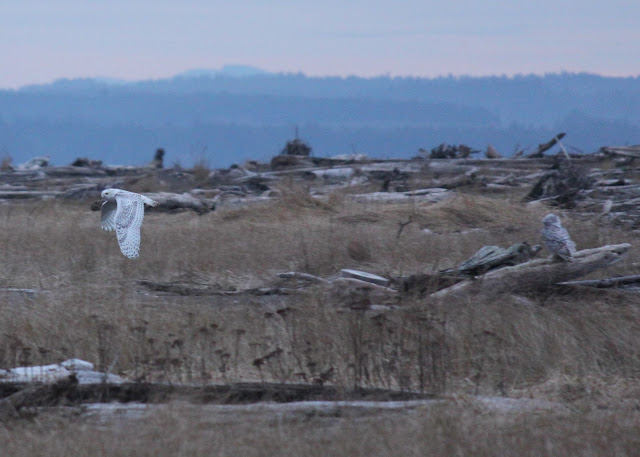 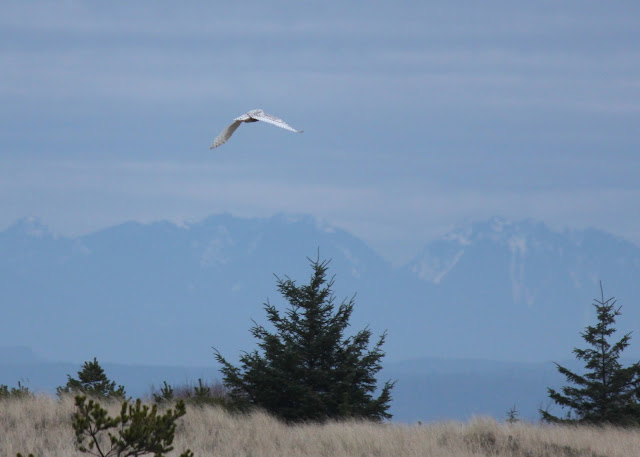 That last owl was flushed by a fellow who did not comprehend another man waving his arms and pointing, indicating the first fellow was about to walk right up on an owl.  I had almost done the same thing but saw the guy waving and immediately walked in another direction.   People are dumb.

Farther out on the point I met a very nice photographer/birder named Andy who mentioned he was going to be starting a blog this year (he turns 70 this year!) about Damon Point.  I can't wait to see what he does because he seemed to have a lot of awesome and creative ideas for it.

I walked back towards the parking area and stopped briefly to scan for the eider.  No dice, but I did manage a photo with all three scoters in it- a first for me (the photo, not the scoters). 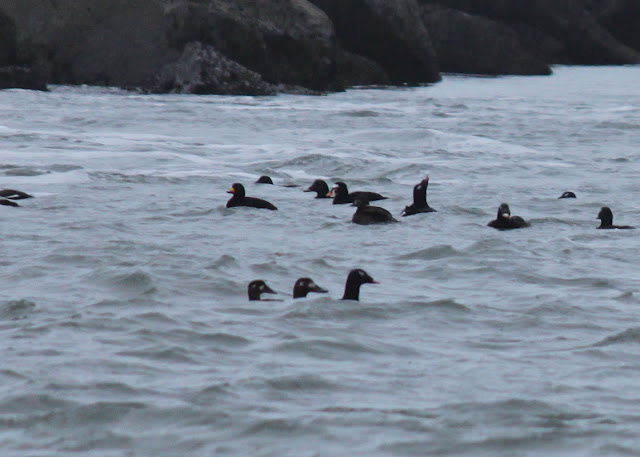 Ok, I didn't say it was a good photo.  I headed back to the car because the dogs were probably getting annoyed (they were sleeping) and drove back to the motel to warm up and refuel.  I drove past the golf course and noticed some geese milling about, and sure enough the Emperor was among them... 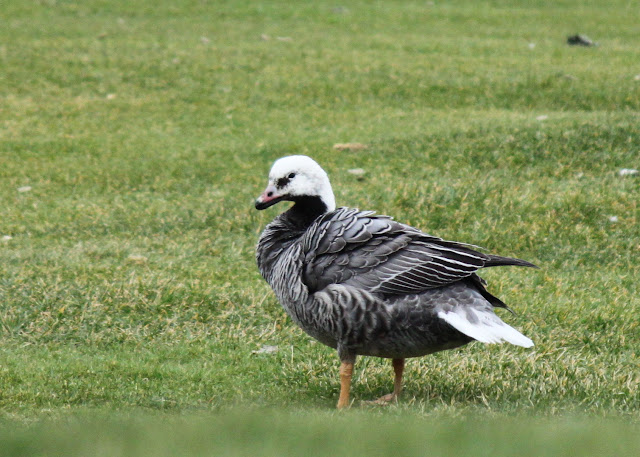 So awesome.  I took the dogs to the beach for some running and fetching and whatnot, then returned to Damon Point intent on finding that eider.  The dogs came along and helped.  Ok, so they mostly just dug a few holes and Ralph tried to eat various crab body parts.

I found this loon that I think is a Pacific Loon, but let me know if and why I'm wrong [Ah, it's actually a Red-throated Loon!]: 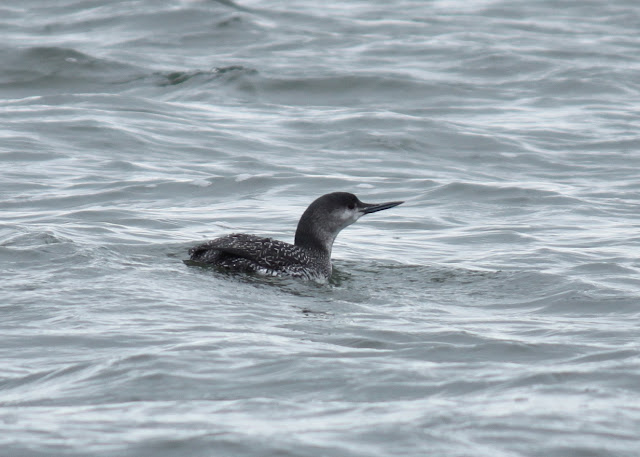 I had walked the dogs pretty far down the beach (away from the point) and scanned all the rafts of scoters, still no eider.  We walked back towards the parking area when I finally found her... the Queen Eider. 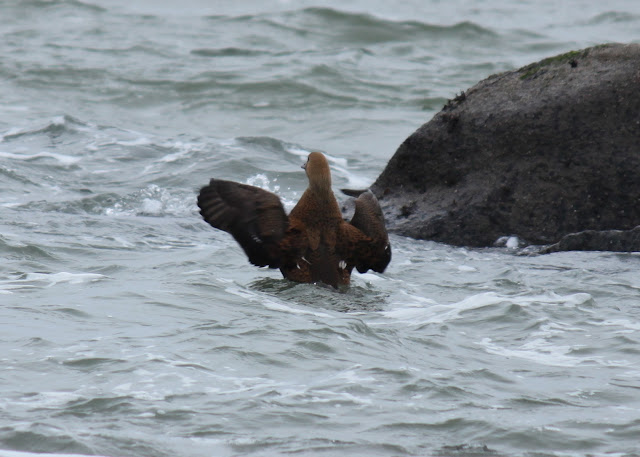 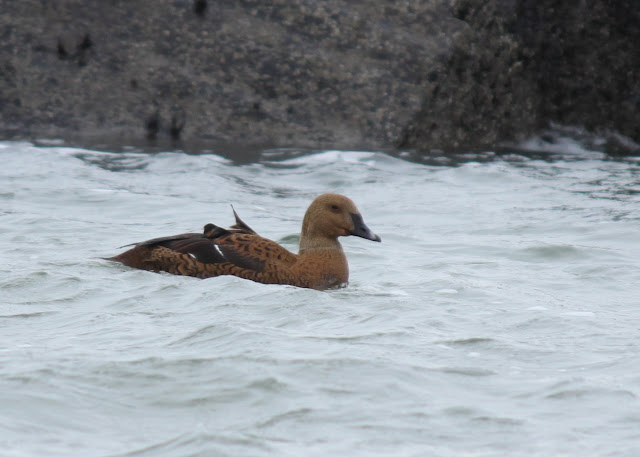 Finally!  She is certainly a beauty.   I left Ocean Shores in the early afternoon to drive down to Ilwaco on my way home (ok, not really on the way) to look for the Yellow-billed Loon.  Success! 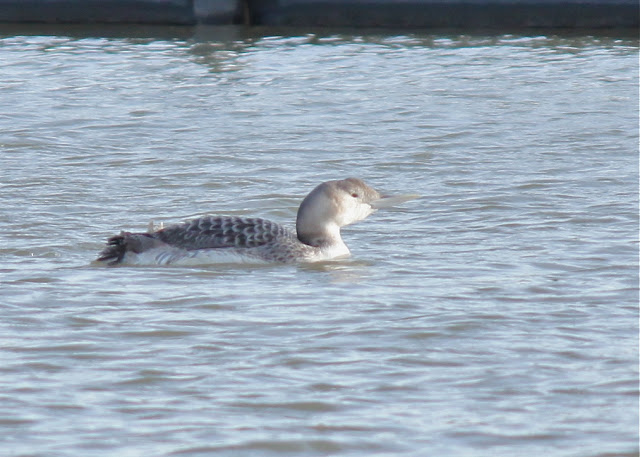 I'll be honest.  At the time I wasn't 100% convinced I was looking at the right loon, having never seen one before,  and I wandered all over the marina checking out other birds.   A pair of Red-necked Grebes had much yellower bills than the Yellow-billed Loon. 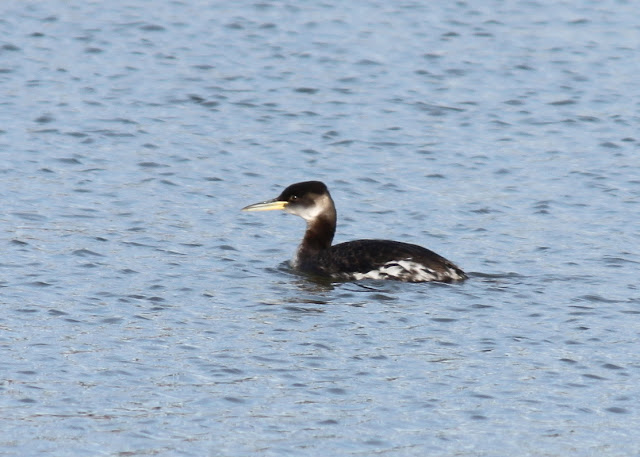 At one point while I was walking along the docks a big splash in the water scared the crap out of me... A second later a Common Loon popped up with a crab in its mouth: 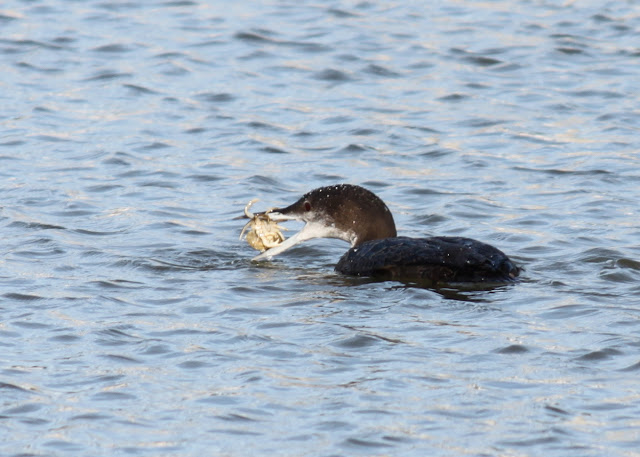 He chowed that sucker down. 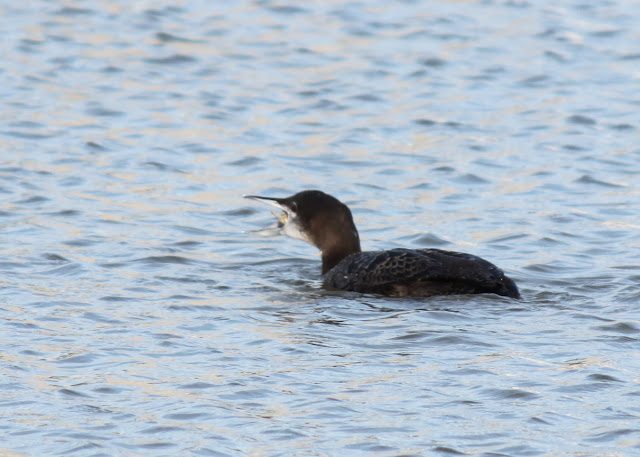 It made for a nice neck bulge: 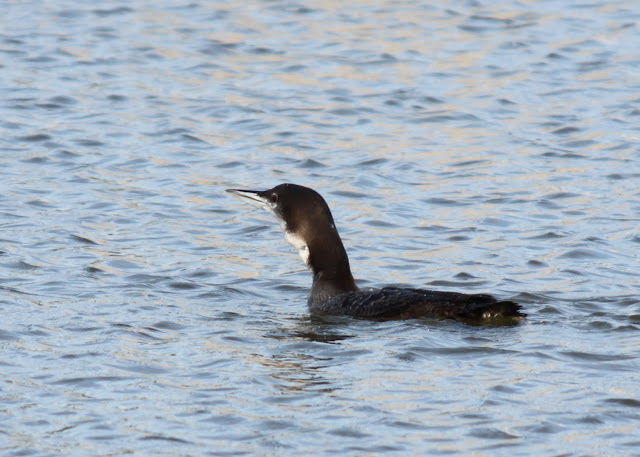 And then a victory dance... 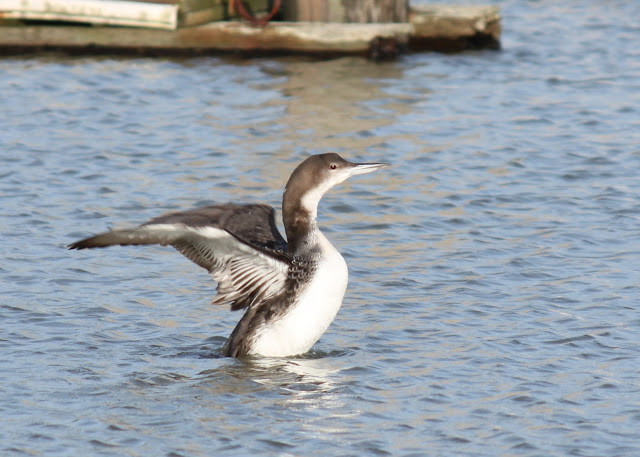