on April 02, 2012
I picked a banner day to visit the coast yesterday.  The rain was pouring, the winds were gusting, then sprinkle on top a hailstorm and oh yeah, some sunshine...   I spent most of my time along the south jetty of the Yaquina River in Newport. 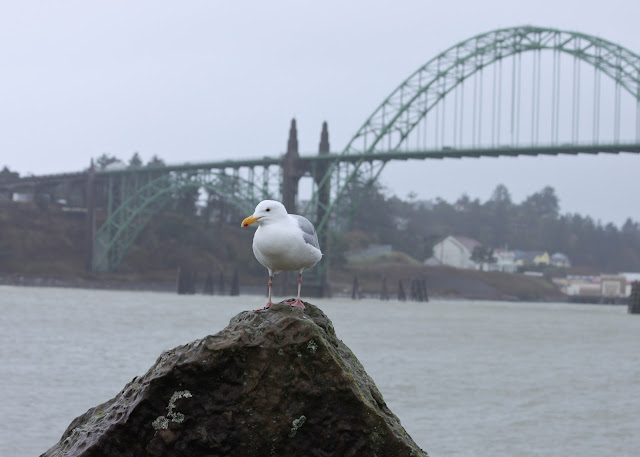 It was pouring the entire time I was there, but there were so many awesome birds I did not care.  Well, sitting in the car completely soaked from the waist down was a tad uncomfortable.  In the grassy/gravelly area along the jetty were the usual gang of gulls, as well as a few Brown Pelicans. 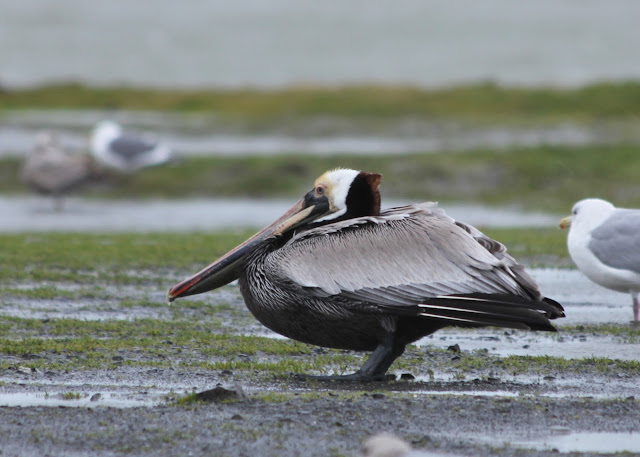 Also nearby was a lone soggy Western Sandpiper: 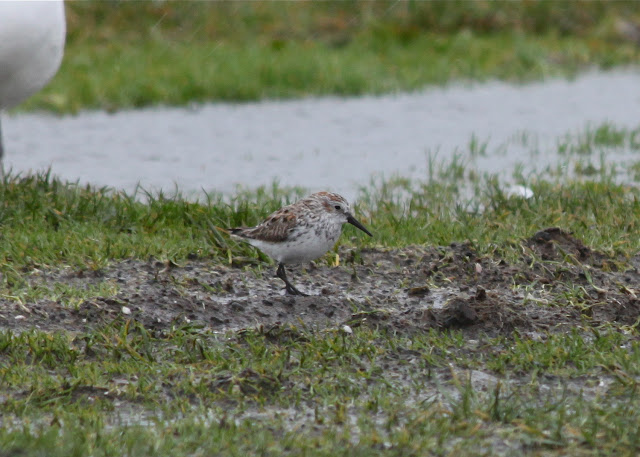 And a couple of Dunlin (right?): 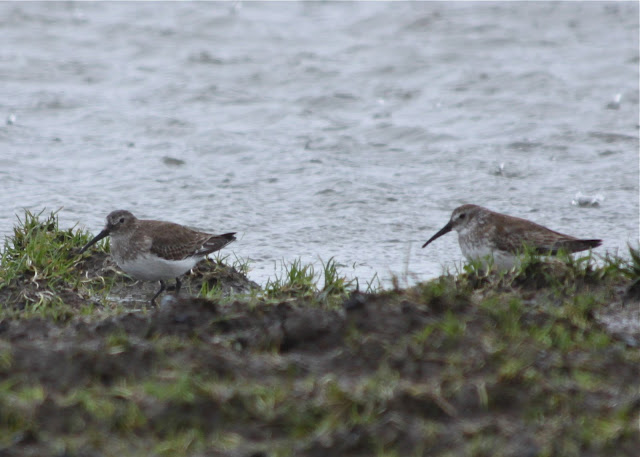 The gulls were mostly of the Western-y/Glaucous-winged-y/Olympic-y variety, and most were trying not to blow away: 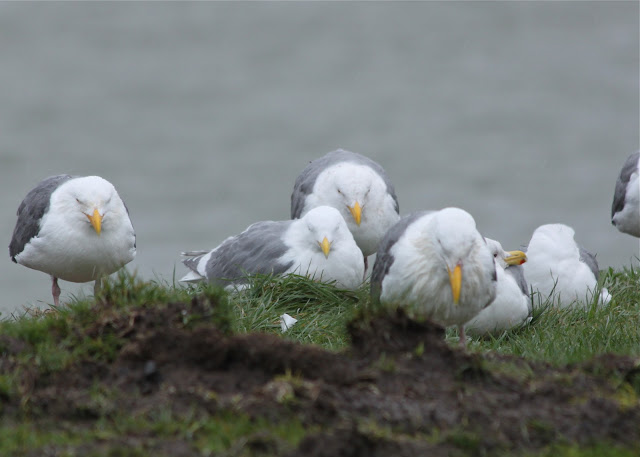 This California Gull stood out among all the pink legs: 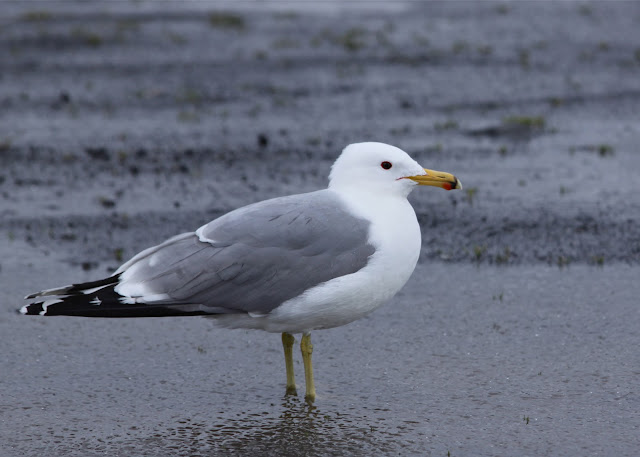 Wow, we have not even gotten to the birds actually in the water yet!  I saw my first Red Phalaropes under the Yaquina Bridge, near the fishing pier. 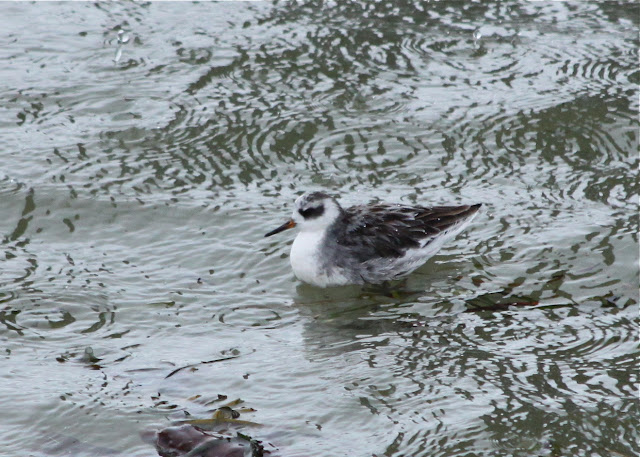 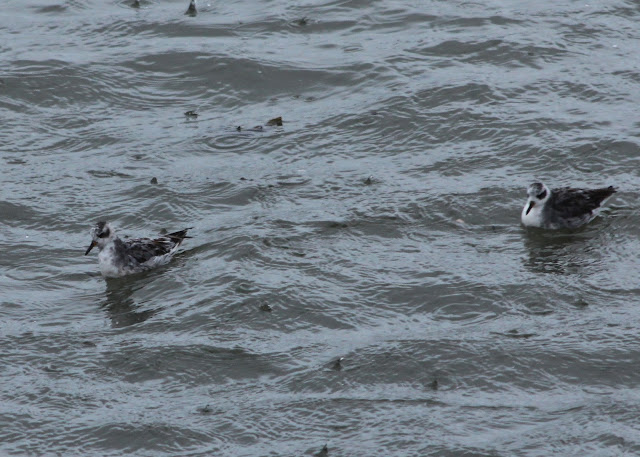 Awesome!  Awhile back when I was entering old bird sightings into eBird I was gently urged to rethink a Common Tern I had thought I had seen.  Turned out it was a Forster's Tern so I lost a number on my life list.  But now I'm back to 305.  Anyway... Many birds along the jetty and the pier were in awkward stages of spring molt, like this Horned Grebe: 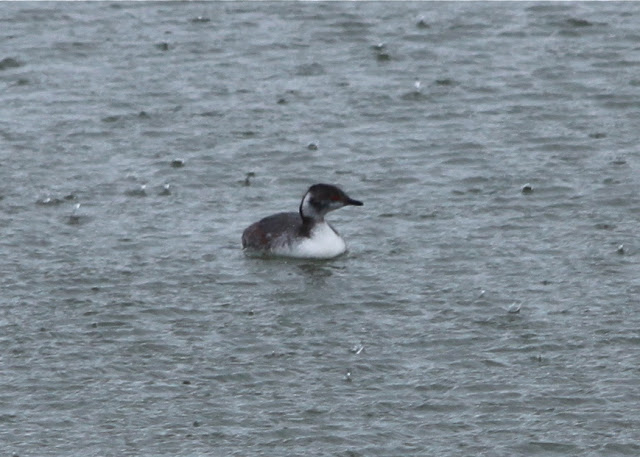 And then there's this grebe, a little further along, that I can't even decide if it's Horned or Eared: 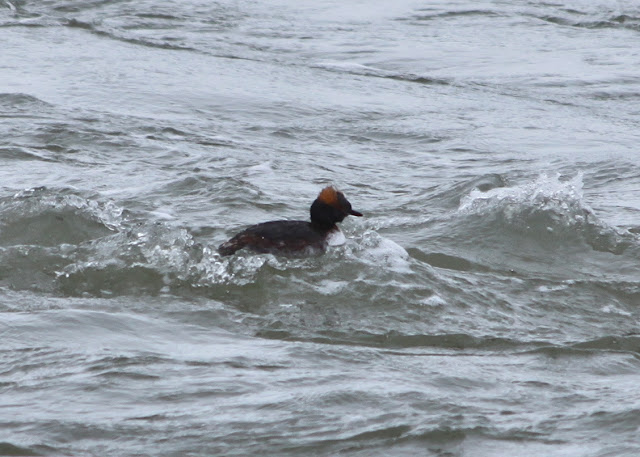 This Red-necked is slightly less awkward-looking: 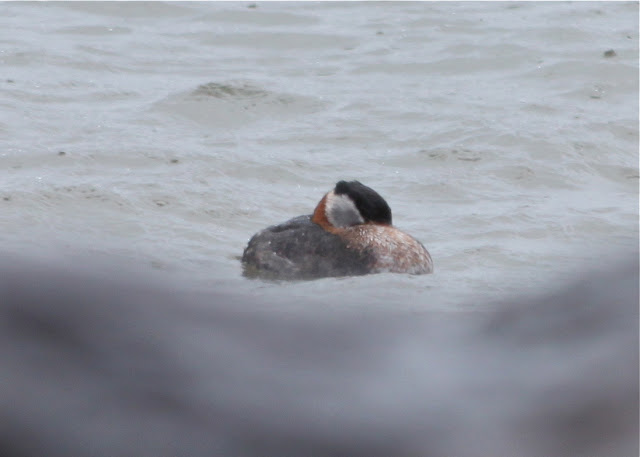 Now for the loons... A big reason I wanted to go to the coast yesterday was to see some breeding-plumaged loons.  I was not disappointed (just soaking wet): 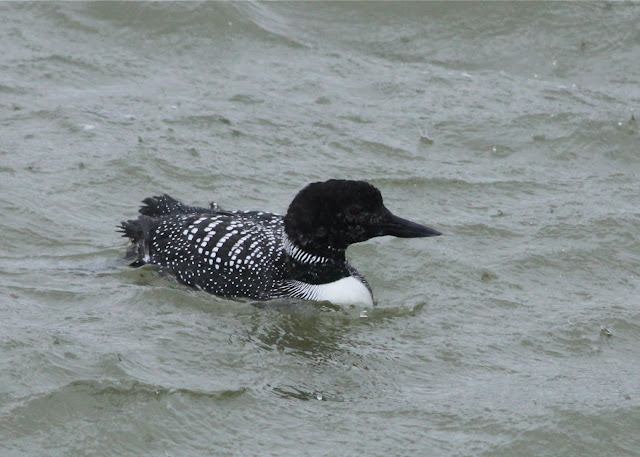 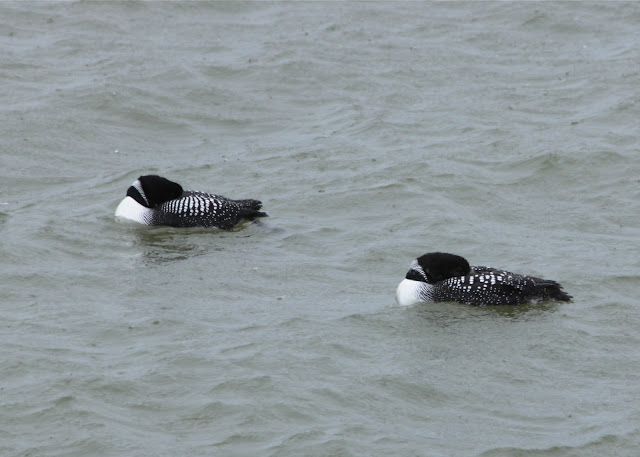 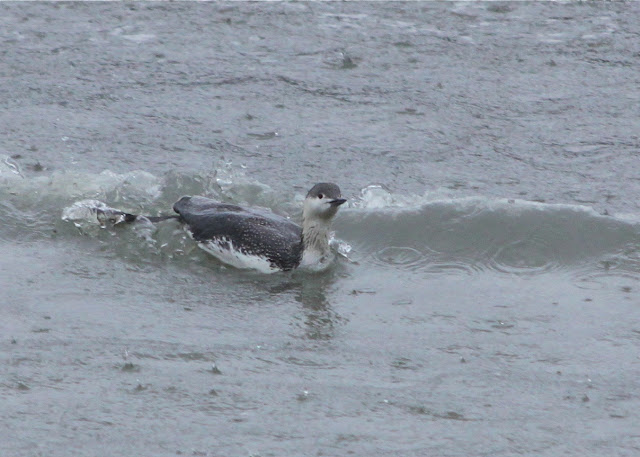 All three scoters were present- this Surf Scoter had just picked up some shellfish I think: 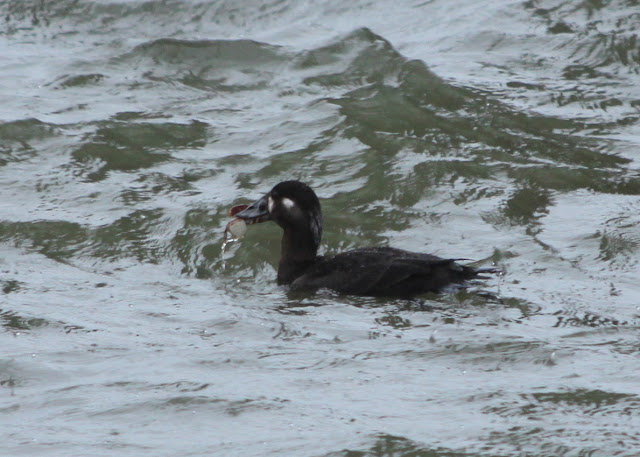 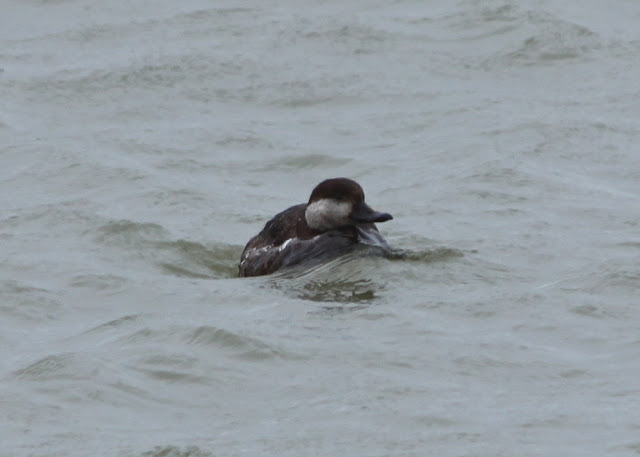 
While I was on the fishing pier, hoping my camera would not blow off into the bay, I looked down and was surprised to find a Pigeon Guillemot below me. 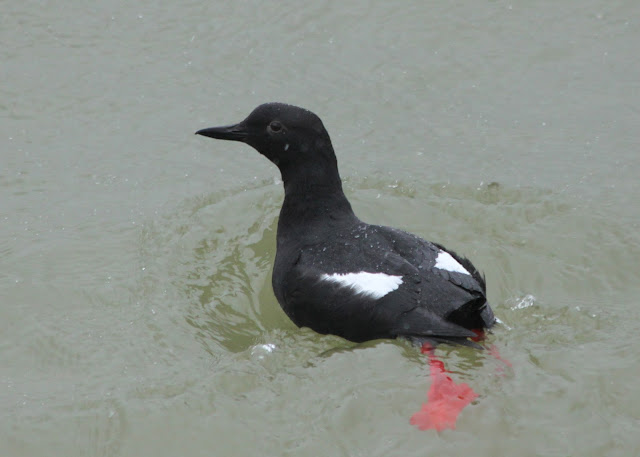 The wind was blowing up his feathers pretty good: 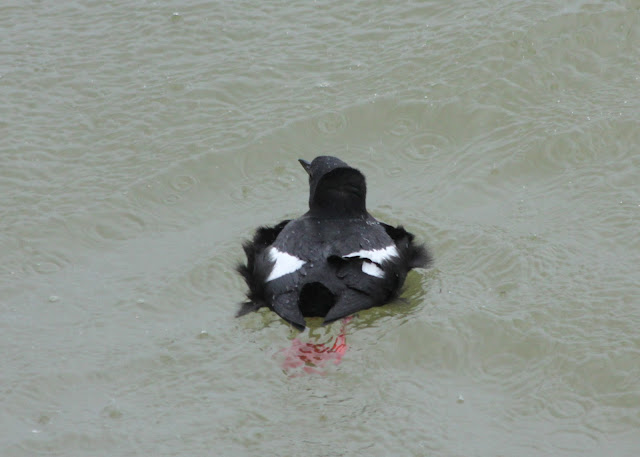 A lone Brant was swimming along the jetty: 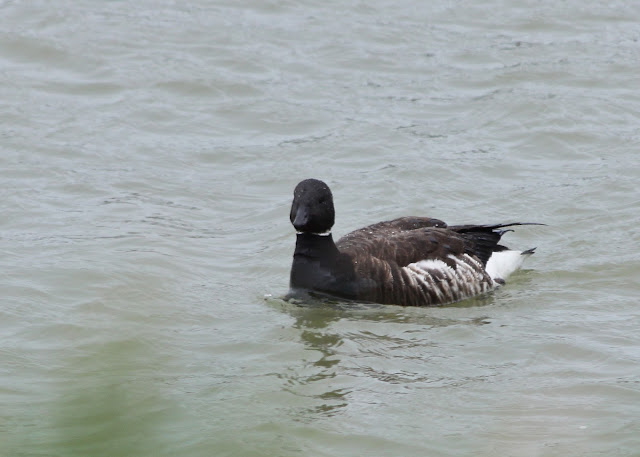 Also around were lots of Pelagic Cormorants, a couple Harlequin Ducks, a ton of harbor seals, and something that looked like an otter but it may have been some other creature.  Despite the weather it was a great day trip, even if I ended up feeling like this: 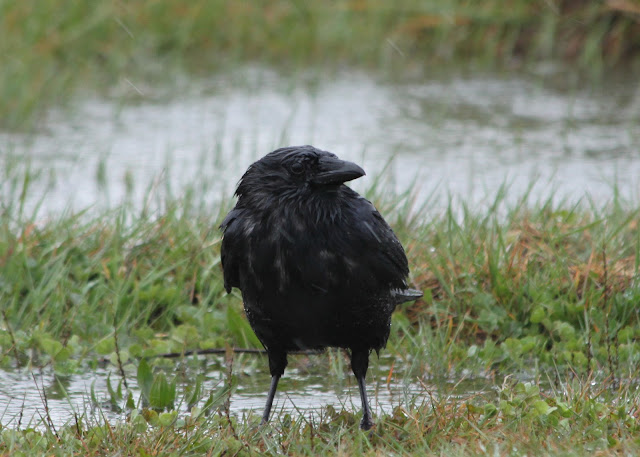