on October 01, 2012
Spoiler: I never found any ptarmigans nor any grouse.

That being said, I had an awesome day up at the park!  I left hours before sunrise and arrived at the park as the moon was setting behind the mountains... 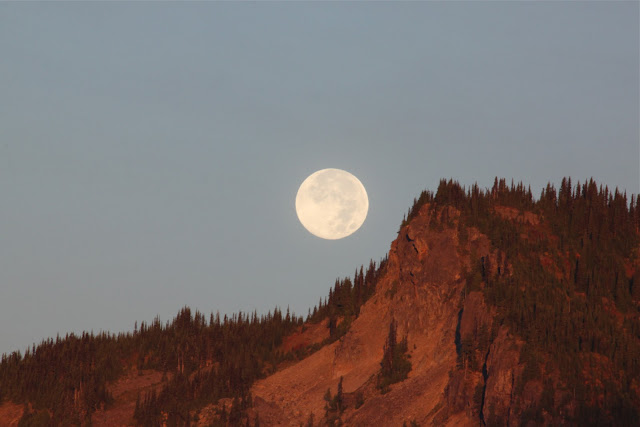 I stopped to watch a Gray Jay eat something dead in the road... 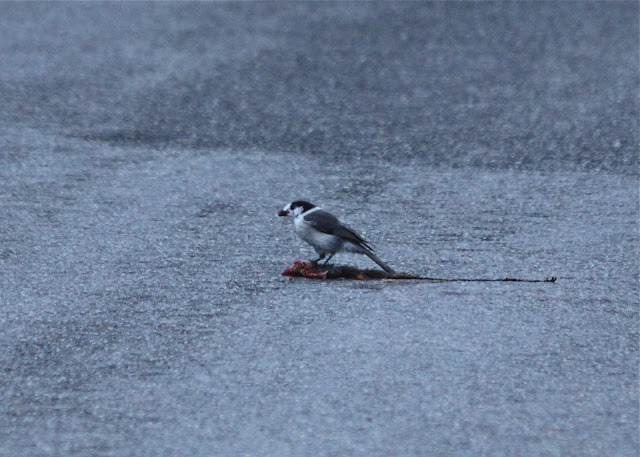 I started my hike on the Skyline Trail at 7:45 a.m.  Besides juncos, the first creatures I found were two pairs of deer... 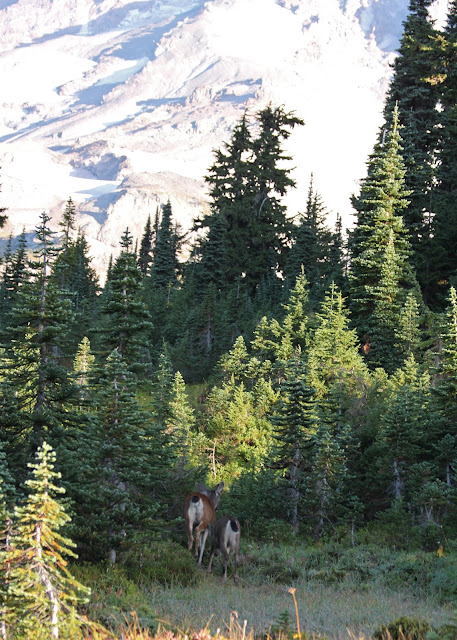 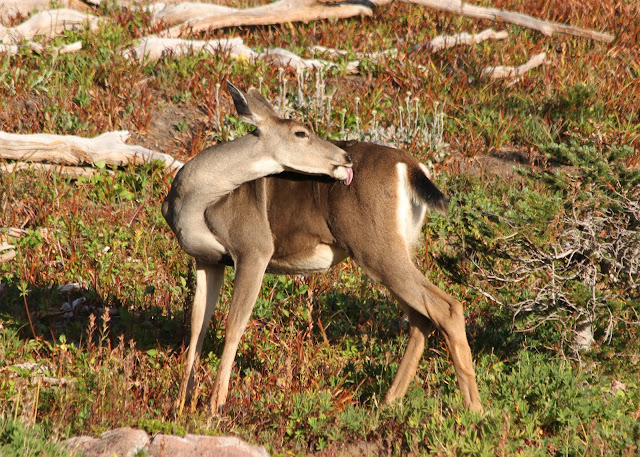 Marmots are all over the area too.  Hoary marmots.  Maybe even whorey marmots too.  Who knows. 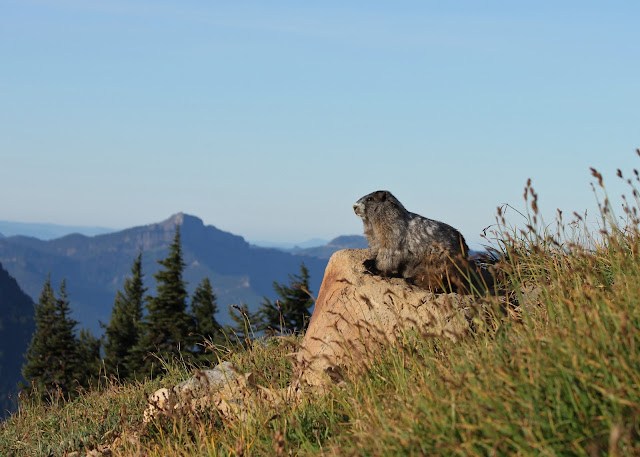 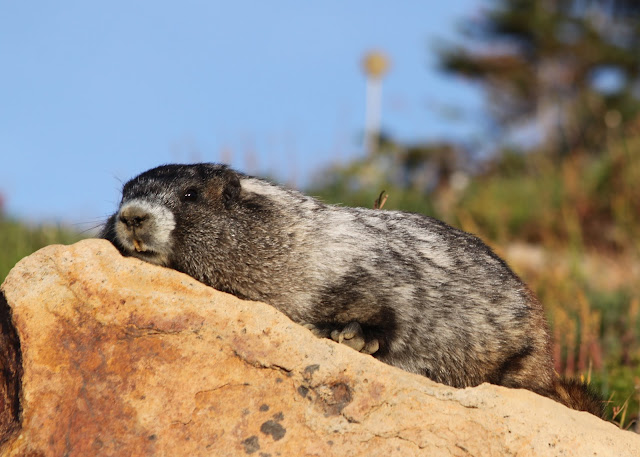 Little chipmunks and ground squirrels were common as well. 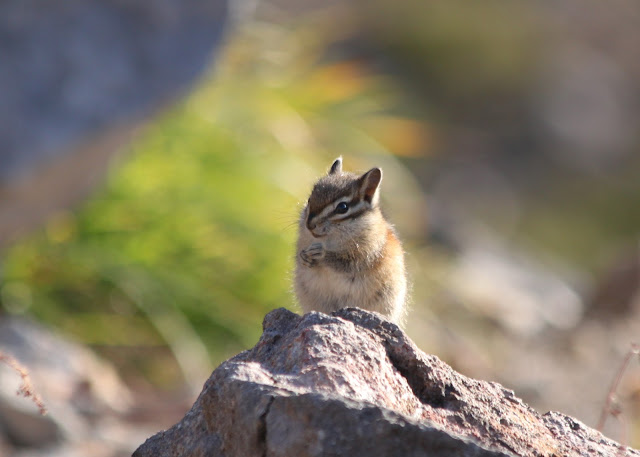 Alright have I painted you an adequate picture of the world of adorableness that is Mount Rainier?  No?  How bout now: 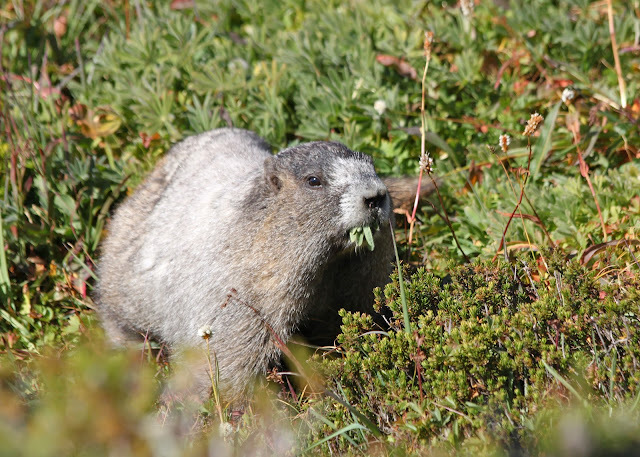 Hopping around one of the big snow patches was a small flock of American Pipits. I blame this fella for Jim.  Who is Jim?  Well, Jim is an older hiker fellow who just had to know what I was photographing.  After that Jim was everywhere.  I thought I had shaken him a few times, but then he would appear again.  Here is Jim at Panorama Point: 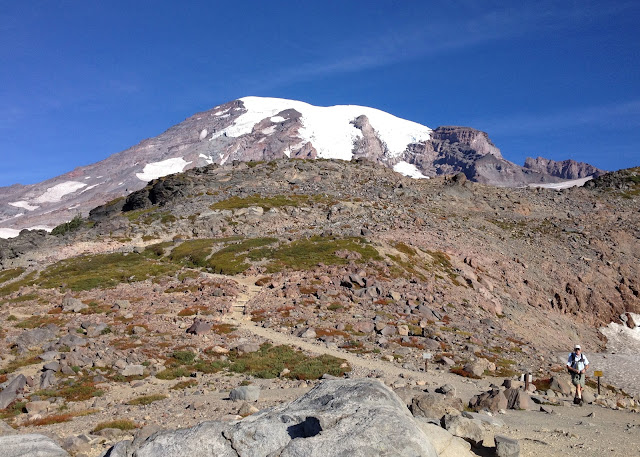 Don't get me wrong, Jim was a very nice older man.  But he was a chatty Cathy.  I am not.  But since I never saw a grouse on this trip I will share Jim's grouse story with you.  One evening years ago, after hiking quite far he was setting up camp for the night.  A grouse walked up quite close to him and he says he took many good photos of it.  Then he took his tent pole and with one fell swoop decapitated the bird and ate it for dinner.  Oh, Jim.

Anyway, the views from Panorama Point were of course awesome. 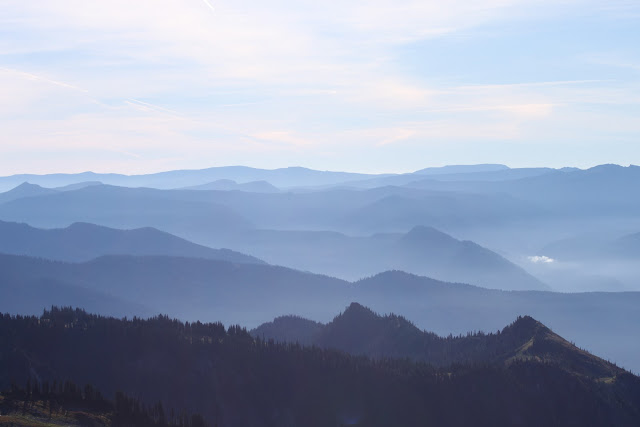 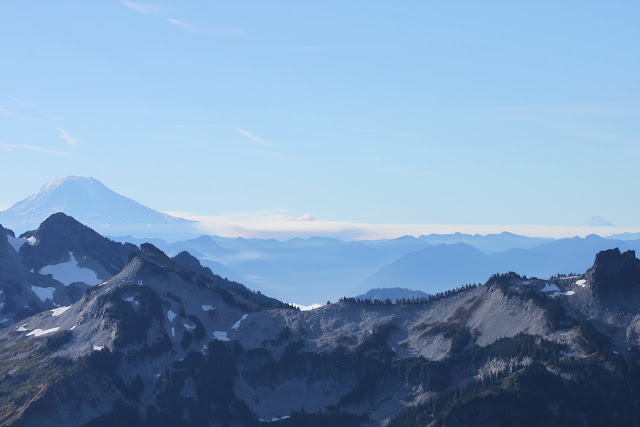 Mount Adams on the left, Mount Hood on the far right

A flock of birds came through and I wanted them to be rosy-finches so badly.  They appear to be something else... thoughts? 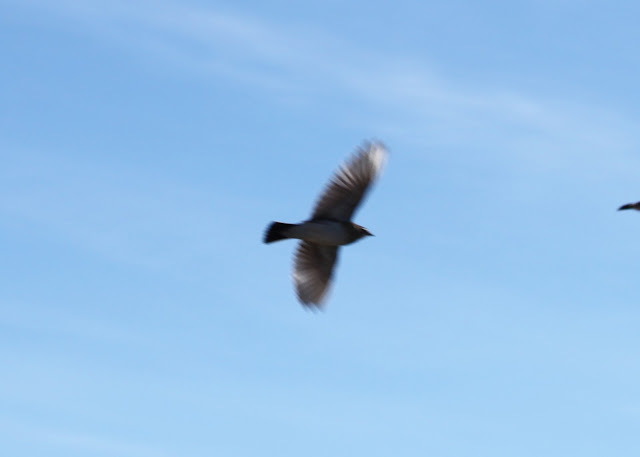 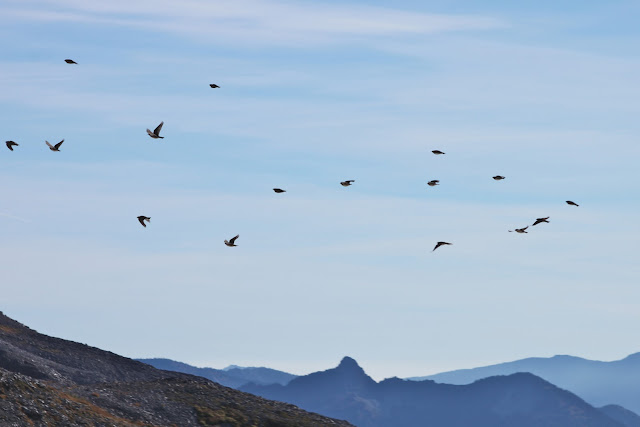 Maybe the lighting is throwing things off?  I really can't figure them out.  Here's a zoomed in shot of the birds in the top left of the above shot: 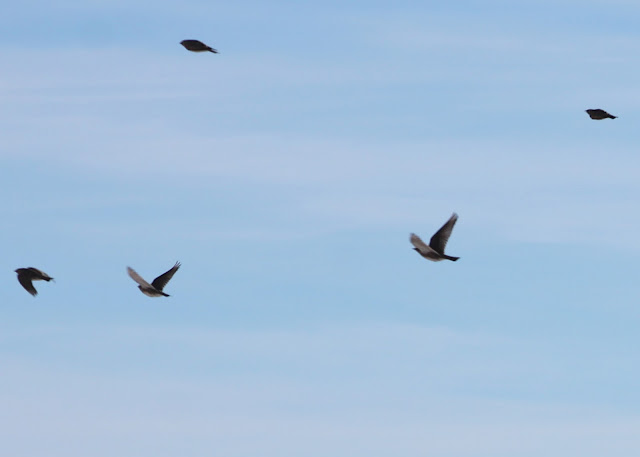 There were a couple of Mountain Bluebirds nearby but these guys appear to be something else.

From Panorama Point I headed up the High Skyline Trail, because the regular Skyline Trail looked like this (with Jim, of course): 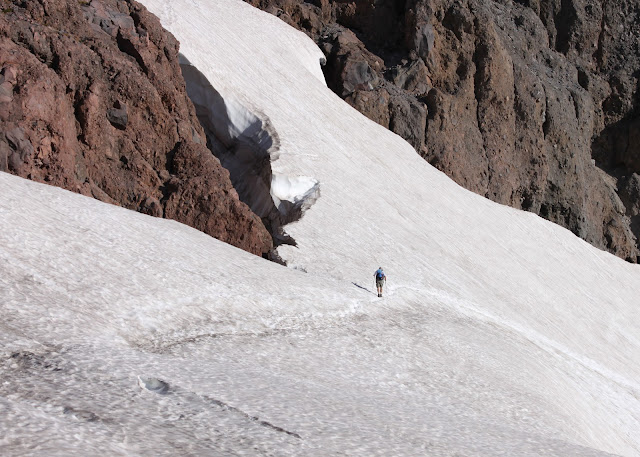 Now, let me present an overdose of amazing scenery... 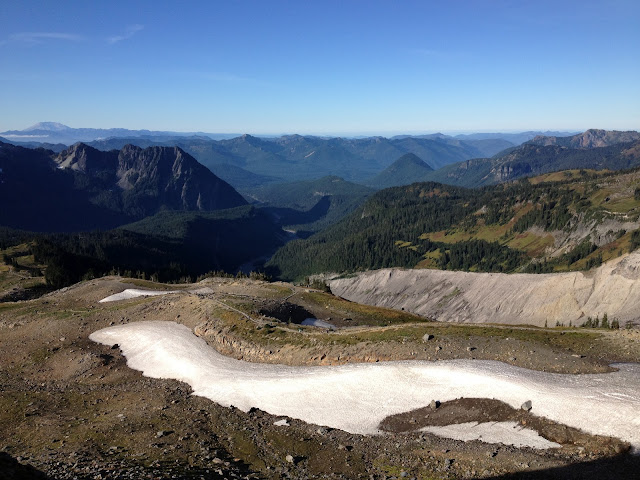 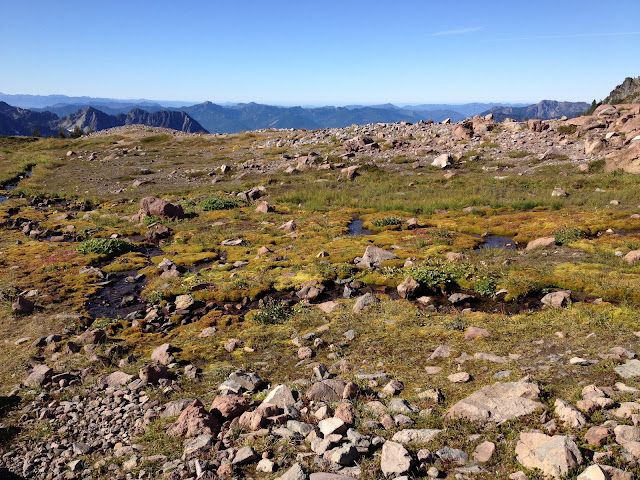 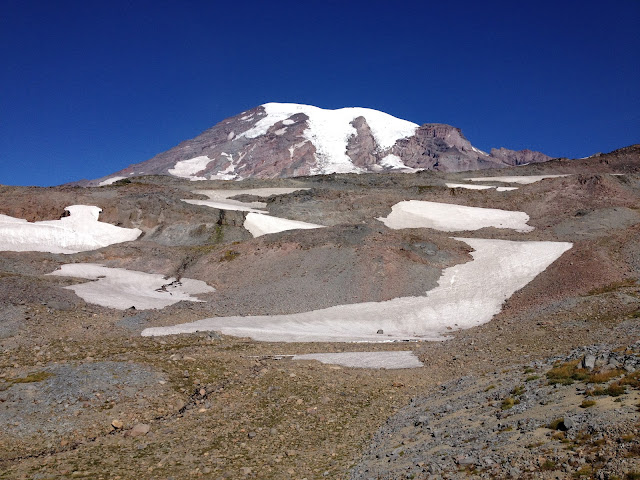 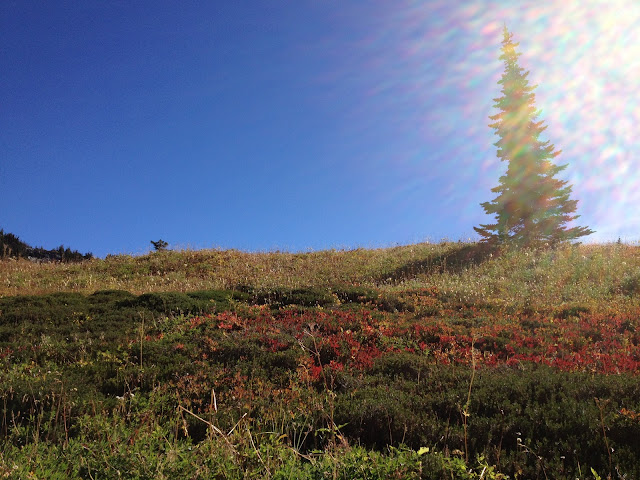 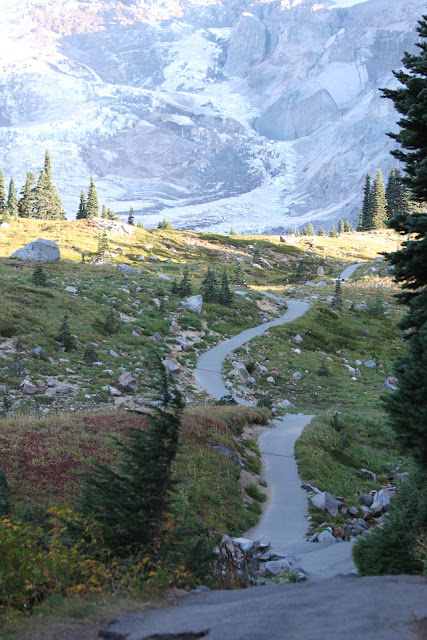 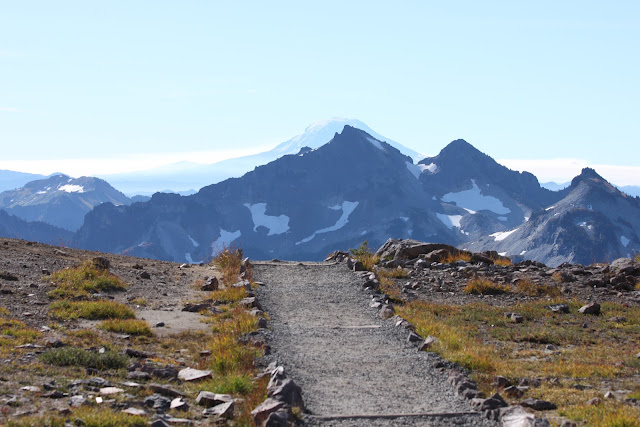 I made my way from the High Skyline Trail back down to the Skyline Trail, and then took the turn-off for the Golden Gate Trail.  On my way down a man pointed out some cars stopped along the road way in the distance.  Said there was probably a bear or an elk.  Made sense, so once I returned to my car (around noon), I drove down to see what was going on.  Indeed a black bear was stuffing himself silly with berries! 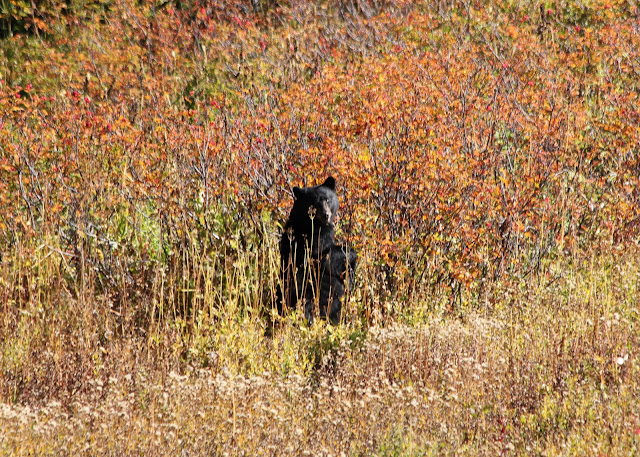 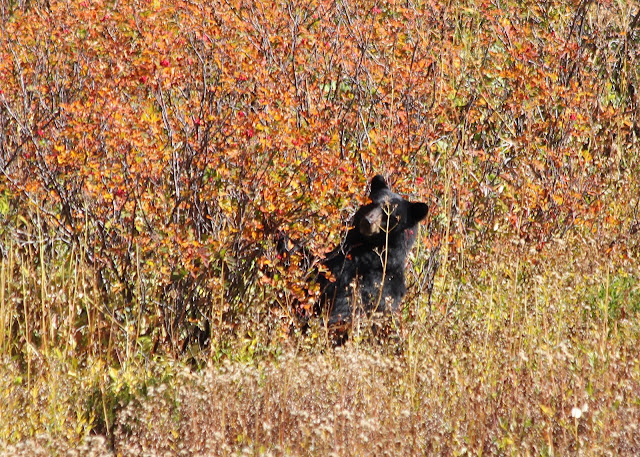 Yep, it was a fantastic trip!  I will be back for those dang ptarmigans, don't you worry.  Good times!!
American Pipit Black Bear Gray Jay hoary marmot