I have been itching to get up to Bonney Butte, a HawkWatch site on Mount Hood, ever since I first heard about it years ago.  You can't get there in a regular car, you need something with high clearance because the last few miles of road are just bananas.  Thankfully Rhett and his friend Sarah invited me to join them yesterday in an appropriate vehicle for a full day up at the butte.

The roads aren't marked and after a lot of what seemed like dice-rolling rather than map-reading we ended up in a parking lot filled with fiending Gray Jays. 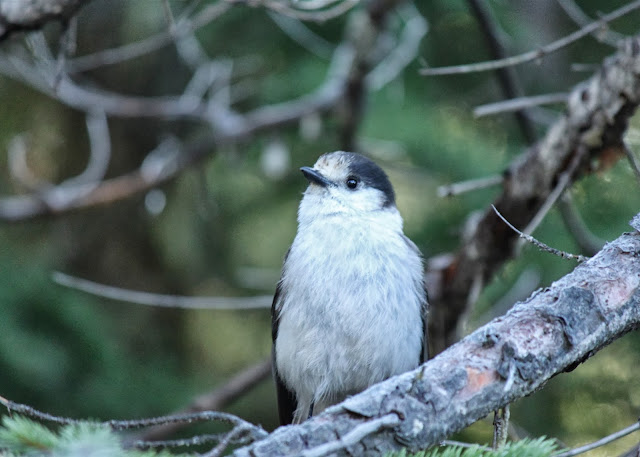 Crumbs for me, yes?

A random bum in the parking lot offered up some donut crumbs to the jays... 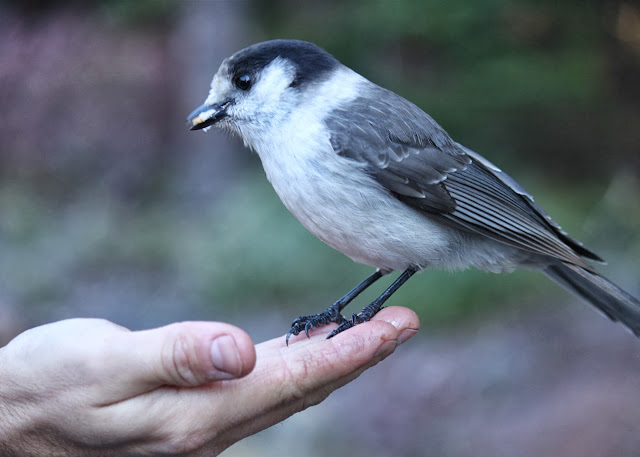 One bold bird hopped in our car while we were getting our gear together. 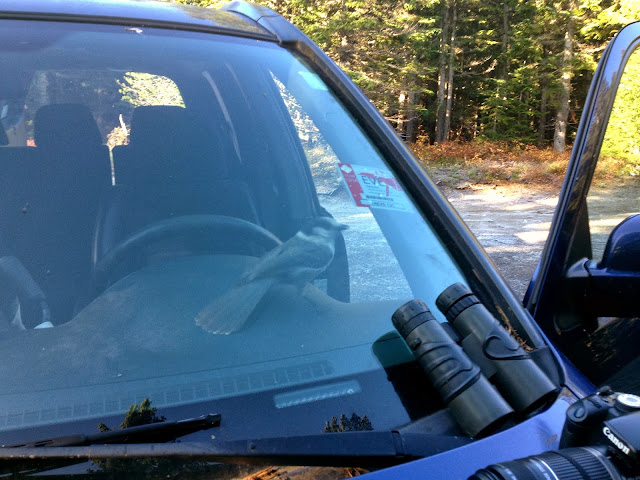 Ok enough of those jokers.  We hiked up to the top and joined the two hawkwatchers for a chilly but awesome day of birds.  Initially the joke was that we had arrived just in time for peak robin migration.  They were flying by in dozens, almost constantly throughout the morning.  Sometimes they would land nearby, along with grosbeaks, bluebirds, solitaires, and nutcrackers... 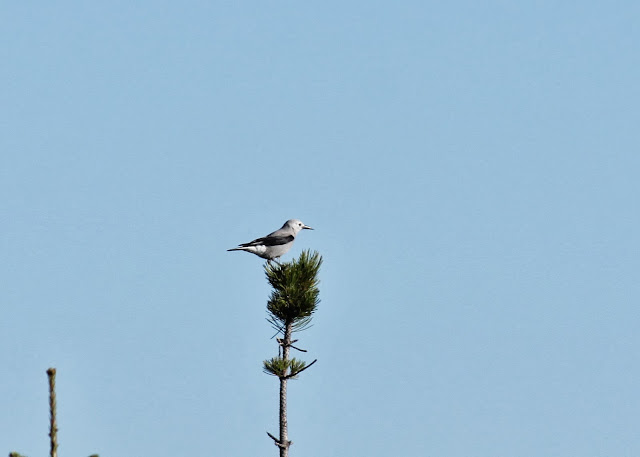 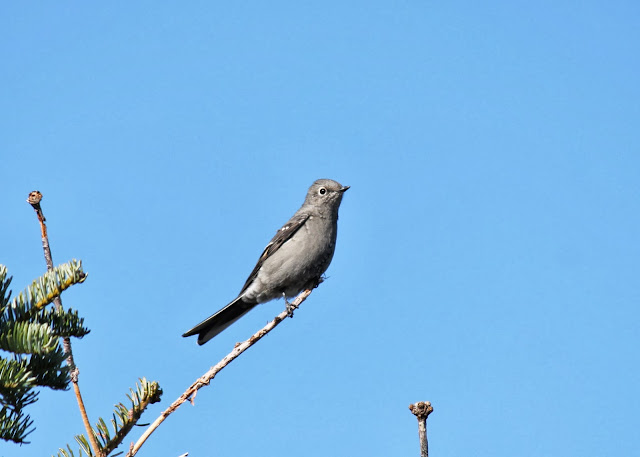 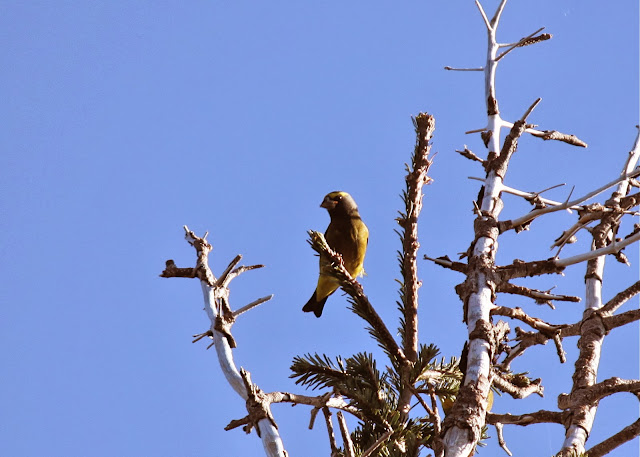 Evening Grosbeak (Blogger is insisting on adding a pink hue to this photo, wtf)

Not only do they watch hawks at this site, but they also have a banding station set up on the hill to the north of the watch area.  This was my first experience with banding- where birds are caught and a little band is attached to their leg so if they are caught again or found dead somewhere, this data can be recorded. 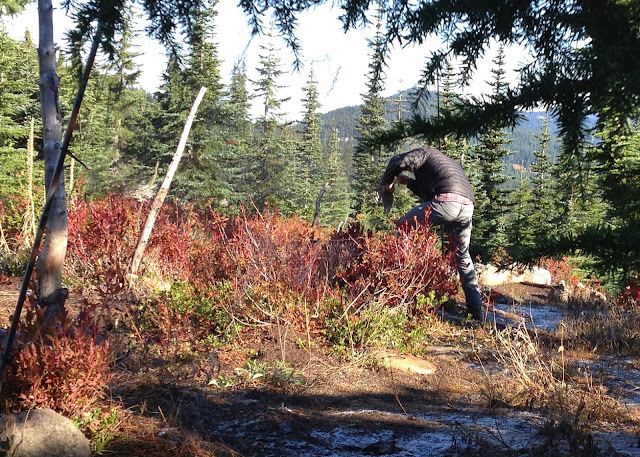 It's hard to see, but in the above photo one of the bird banders, Andrew, is freeing a juvenile Sharp-shinned Hawk from a net to be banded.  I appreciate banding and what can be learned about birds from it, but I have to say I really struggled with the use of live bird baits.   The banders sit in a small blind and when they see a hawk or something overhead they give a tug on a string to cause a bird (pigeon, starling, or house sparrow) outside in a harness-type thing to hop up and flutter it's wings.  This sometimes attracts the hawk to swoop in to grab it and then gets caught in the net.  I honestly couldn't watch it, but that's just me.

And I ain't saying I didn't benefit from it. 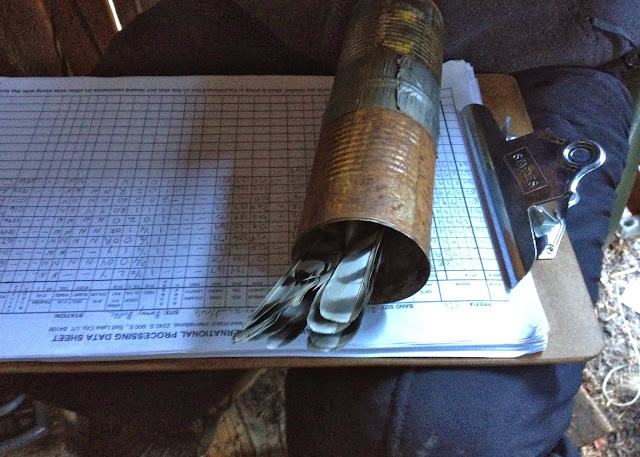 Sharp-shinned Hawk in a can

We watched Dan, the other bander, measure and weigh the bird, attach a band, and then joined him outside for the release. 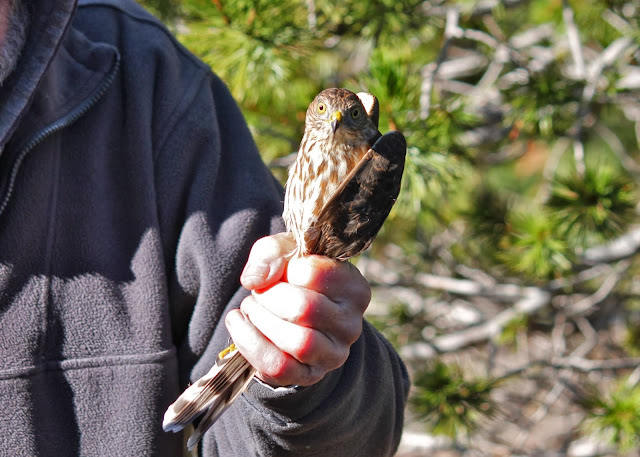 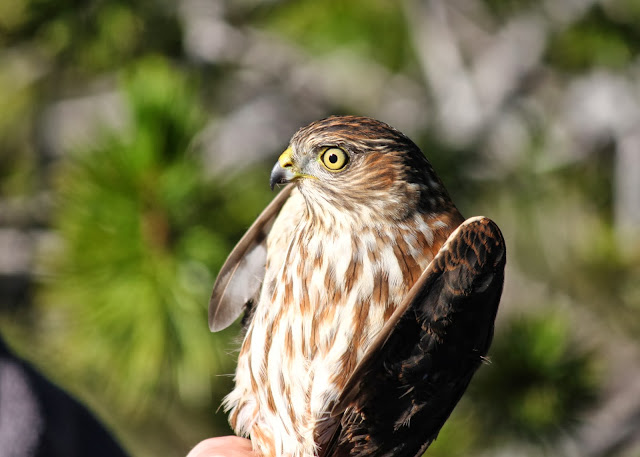 Sarah got to actually release the bird, though it took a minute for the hawk to realize its freedom. 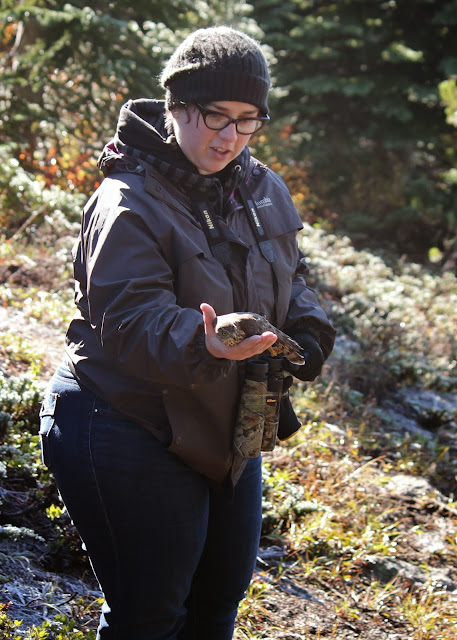 Back at the watch site hawks and such were flying by regularly.  Lots of sharpies, but also a couple of Bald Eagles, a Golden Eagle, a Rough-legged Hawk, Red-tails, a Merlin, and only one Cooper's Hawk that I saw. 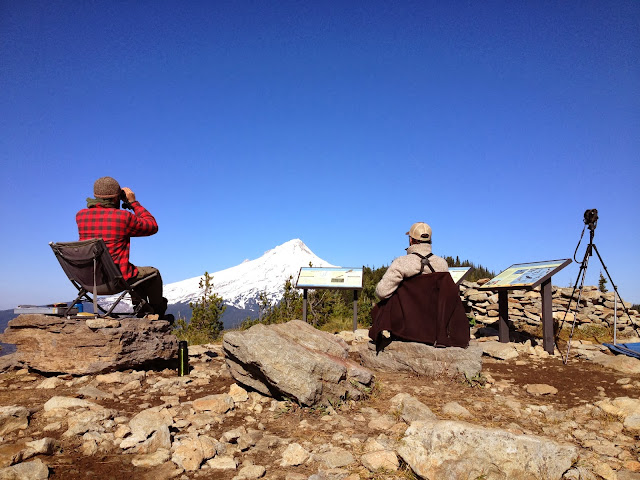 While I was eating my sandwich the banding station called us and said they had caught a juvenile male Northern Goshawk.  Rhett was trusted with the task of fetching the bird from the station to bring back to the watch site for everyone to see. 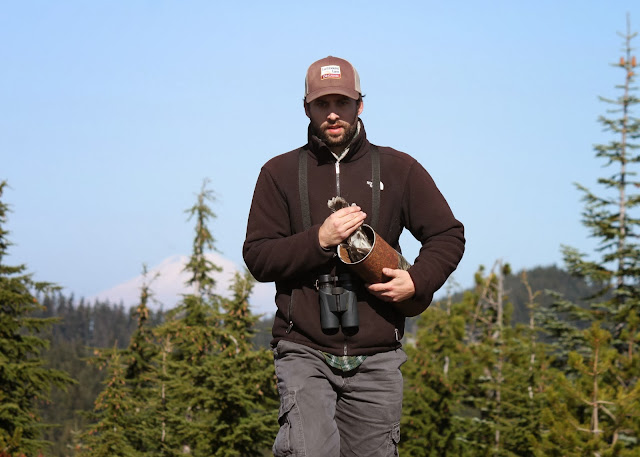 Rhett handed the bird off to Jade, one of the official hawkwatchers, to get the bird out of the can and into our hearts.  I didn't just say that. 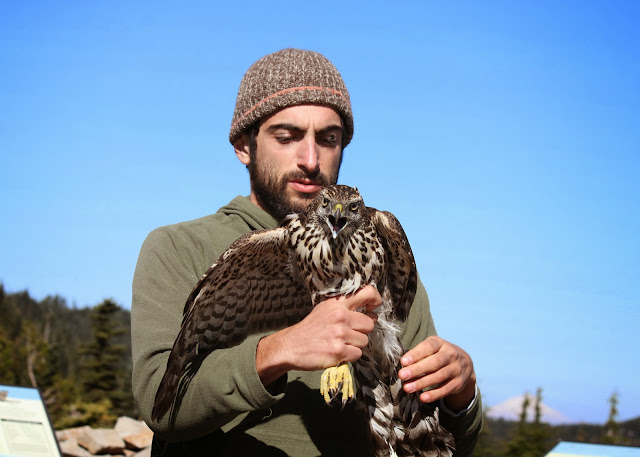 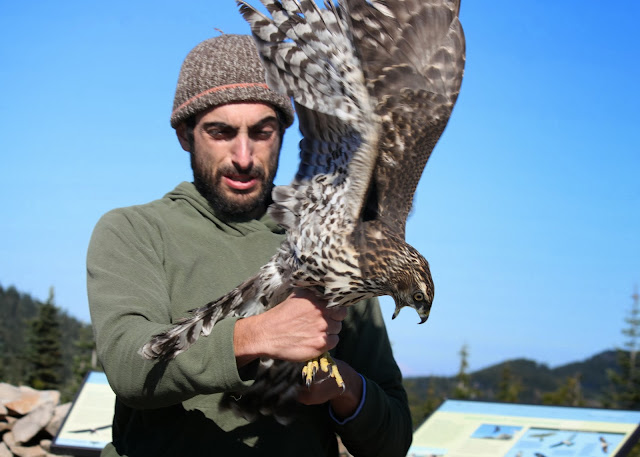 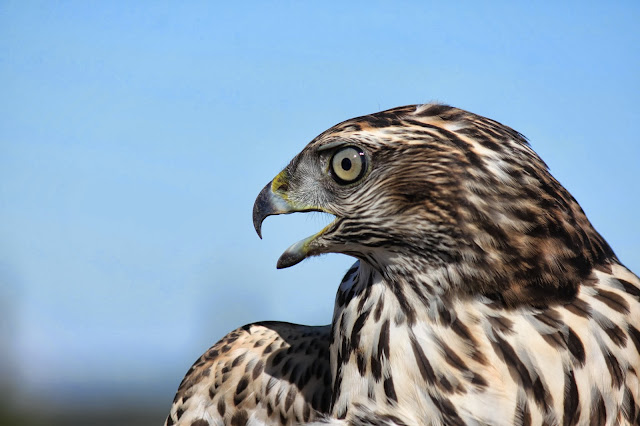 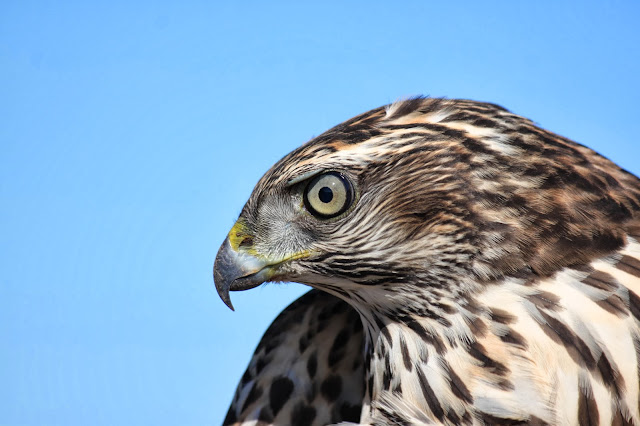 They said this was only the second goshawk they had caught this season, which is coincidental because Michele and Dwight got to see their first one a week or two ago.  A little while after releasing this bird another goshawk came into sight- a bigger female!  We watched it suddenly swoop down towards the banding station and we crossed our fingers that they had caught it.  Turns out she was only briefly caught before freeing herself from the net.  Ah well, can't complain.

It was an awesome day up at the butte!  Many many thanks to Rhett for the invite and to the hawkwatchers for the quick ID's!  Good times!! 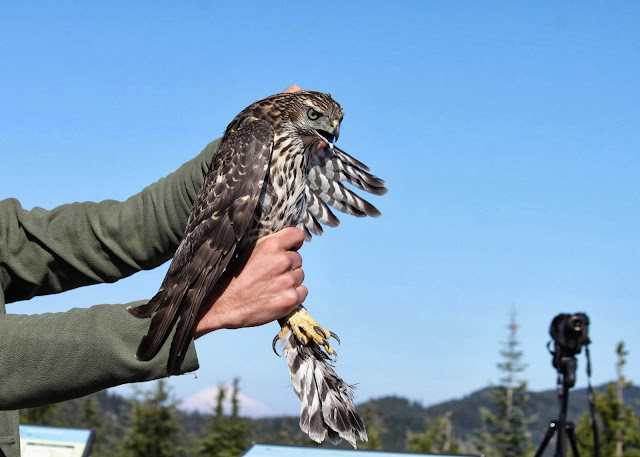