As some of you might recall, the last few months I have been exploring Clackamas County to the south of Portland.  I have been heading out there about once week to check out different spots and look for different birds.  I use eBird a lot for sightings, but also Birding Oregon for general location info.  On Tuesday I checked eBird and found a report of a Ross's Goose in the county.

I found the bird through the mist and the fog: 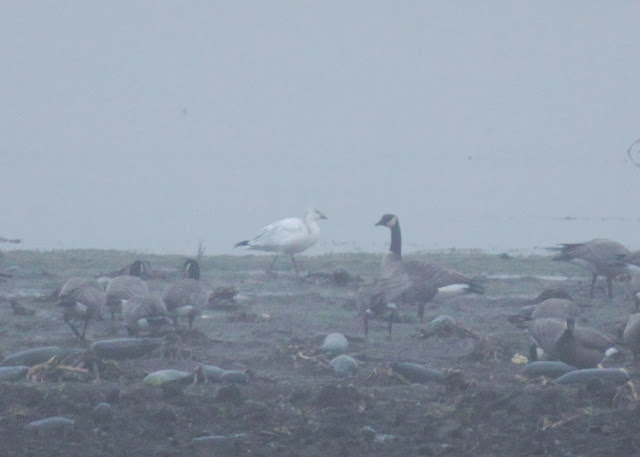 This was only my third Ross's Goose ever.  The first was a few years ago near the coast, then one last winter just appeared before me at Whitaker Ponds.

That said, I was psyched and could not figure out why the bird made its way onto eBird but not on OBOL, so I shared it.  The bird was in a field that was labelled as a "hotspot" on eBird, that can easily be viewed from the road.  It seemed legit to share such a sighting.  That day several people posted that they had seen the bird, possibly a county bird for many. 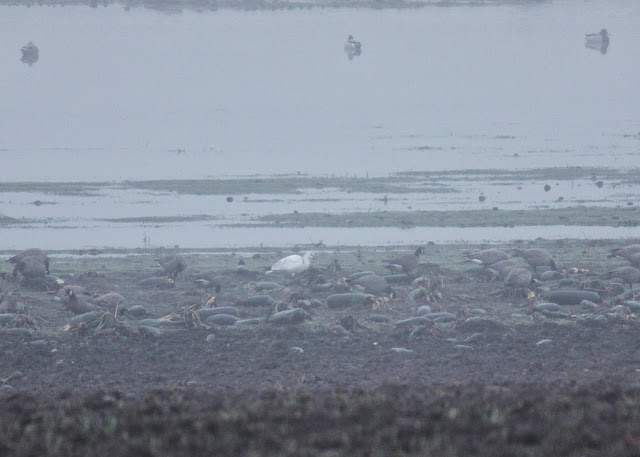 Things seemed fine.  Till I looked at the Portland Area Birds google group this morning and found a lengthy rant by the original eBirder, Greg Haworth.  He was not pleased that the bird was shared on OBOL.  And so I present to you, my first birder drama!!

Here is the post by Greg from the google group:

Last Tuesday i was surprised to find a Ross's Goose at a patch that is about a mile from where i work.  Known as the Blount Road Swale.  This place has been known for quite a while. Tim Janzen wrote about it in 1996 in Oregon Birds (v22.1,7).  It's a great place that i stop at almost every week day.

When i found the bird i emailed a few folks about it so they could judiciously get the word out and go see the bird if they wished, like i always do when finding a local rarity.  I personally know these people and respect them as birders, both for their knowledge and ethics.  I don't post to, but do occasionally read OBOL, and rarely post here.  So it is with some surprise, though not unexpected i guess, to read someone had mined my eBird report, "poached" the bird, and posted it on OBOL.

That won't be happening again and i'll explain why in a bit.  First, my new protocol when finding a local rarity will be to:
1) email the folks in my pipeline -- people i personally know and trust
and
2) post my sighting to eBird once the bird has been verified to have left.  I like the idea behind eBird and want to contribute to the database.  I'm even the eBird reviewer for Columbia County.

Now, why would i do this?  Because apparently not all birders know about or buy into birding ethics.  It only takes one "bad apple".  This one drives a car with the license plate: 305 EKR.

When i drove up to the swale today after work there was a "birder" down at the edge of the seasonal puddle, within 50 - 100 feet of the feeding cacklers that flushed as he continued his advance.  Why is this a big deal?
1) It's private property!  It may not be posted but only an ding-dong would not recognize this. Strike one.
2) Really, you can't exercise any restraint and have to get so close that you stress the birds off an important feeding area?  Strike two.
3) Obviously you're interested in seeing the bird, but you flush the flock so that any other birder happening by wont be able to observe it.  Strike three

Now if this person actually obtained permission to enter the property, point 1 would be moot.  But, points 2 and 3 are still valid in my opinion.  So just two strikes, instead of three.

Like i said, i bird this place practically every day.  I've seen 106 species here to date. I have met both of the owners of the eastern properties and talk with them regularly.  I even helped remove some of the land from being slated for development.  This place is special and deserves respect.

I have emailed both owners, gave them the license plate number, apologized profusely on behalf of, most of, the birding community, and assured them that i would discuss the incident with the community.  I also explained that 99% of the birding community would never engage in this type of behavior.  I also appolized that word got out, that it was't my intent but i was responsible, and that their quaint country road was seeing an increase in traffic stopping along the road.  The last one was personal because i know these people, know how they feel about their land, how they cherish their country quiet, and how they regard "outsiders".

Is the goose still there?  How the hell would i know.  Some ding-dong tromped into private property, got so close that he flushed the flock as i arrived, and i was so pissed off i didn't stick around for it to resettle.

Someone need to reads this put out by the ABA: PRINCIPLES OF BIRDING ETHICS

So, 305 EKR if you are reading this, (or if you know who drives that car, send him here so that he can); please, please, please, reconsider your approach when observing these wonderful creatures that we all love so much.  Barring that, explain your actions and convince me you're not a ding-dong.  I'm reasonalbe and not ashamed to change my position and offer an apology given adequate reason to do so.

So as you can see, I "poached" a bird.  Is that a thing?   I understand being upset about someone entering private property, that's messed up.  That 305 EKR person can go to hell.  But he posted a bird on the internet with a location, and is now upset that other people know about it.