A week off from work?!  What to do??  A crazy road trip to eastern Washington and Idaho, of course!  Apparently I am completely addicted to driving east these days, and tales of a reliable Northern Hawk Owl were enough to convince me to get back in the car.  On Christmas day I loaded up the mutts and my friend for a 2-day turned 3-day adventure. 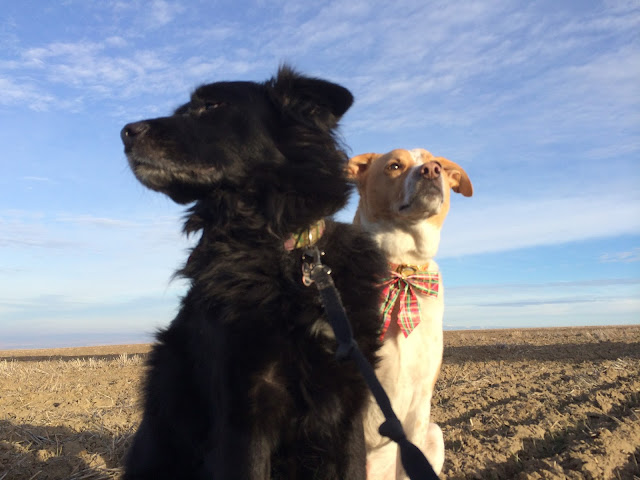 Our first stop was near Kennewick, WA to look for a Snowy Owl.  We got briefly sidetracked in this land of wind turbines when we realized there was one close enough to the road to walk up to it.. 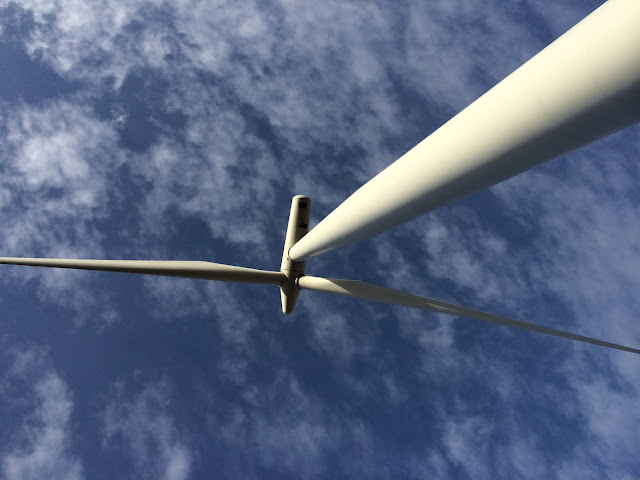 Wow.  Those things are crazy.  No dead birds below this one.  We drove up the road a bit to look for the owl and quickly found a little white dot. 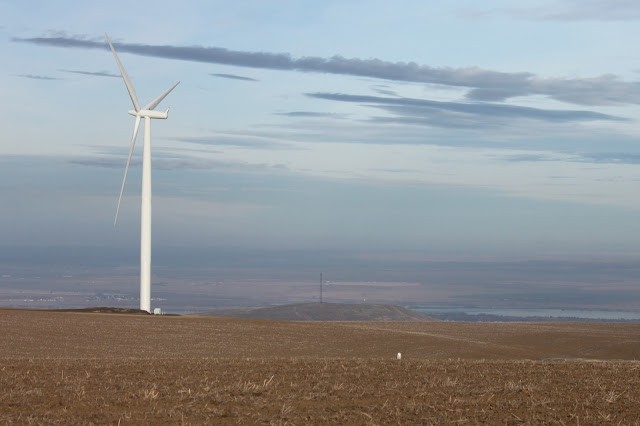 Could it really be that easy??  Yes.  Yes it could be. 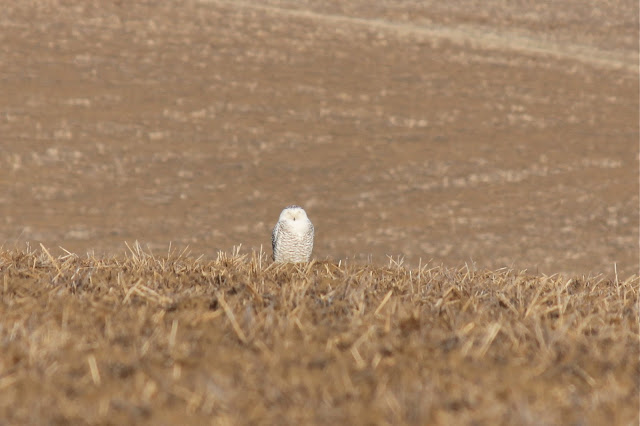 We had time for one more stop before sunset and I chose a park along the Snake River.  Here a pair of Great Horned Owls were sharing a tree with a Northern Saw-whet Owl. 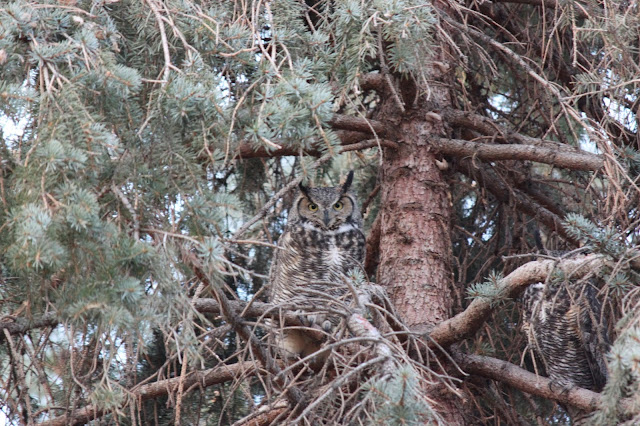 Note the second owl on the limb to the right 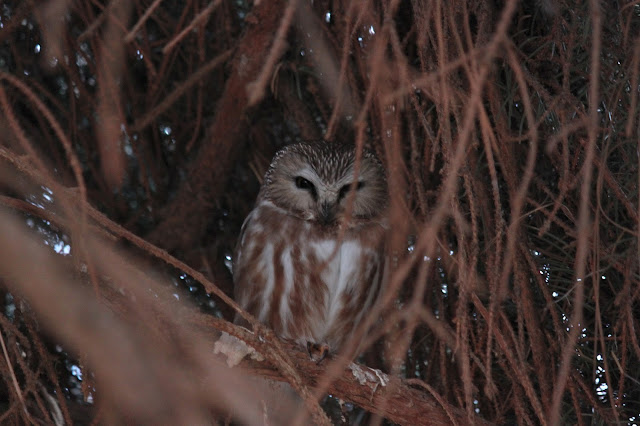 As you can tell, it was getting fairly dark by this point.  We were treated to an amazing sunset before heading to a motel in Pasco. 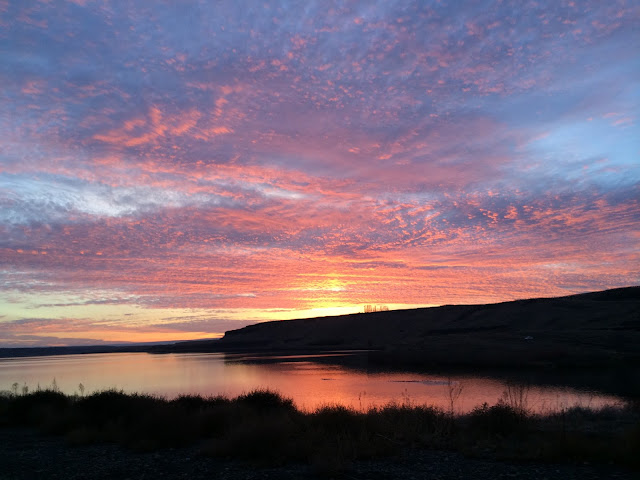 The next morning we woke up to freezing fog and flurries.  Not the most ideal driving weather so we waited a couple hours before leaving for Idaho, hoping things would improve.  We finally got on the road and a few miles out of Pasco the fog disappeared and it was sunshine for the rest of the drive. 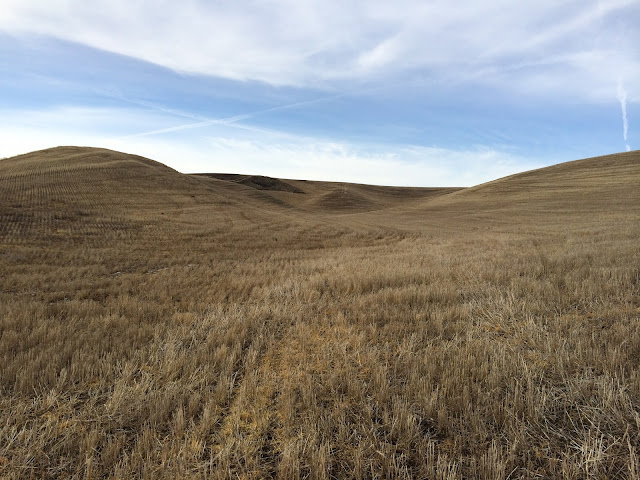 We made it to Moscow, Idaho just after noon... 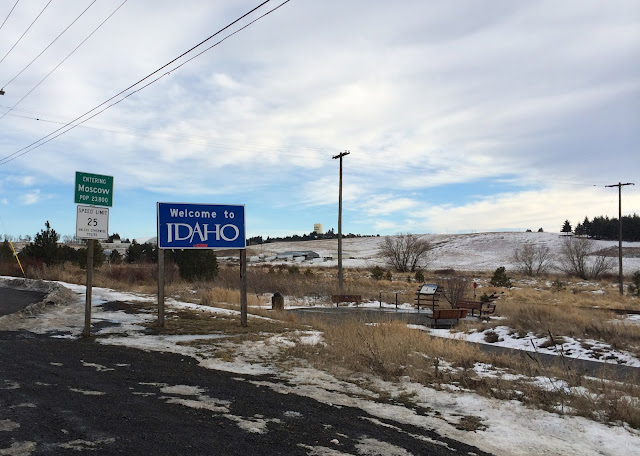 We made our way to the Safeway where the Northern Hawk Owl has become a regular fixture since early December, and began to wander the area.  I was getting frustrated that we weren't finding it when out of nowhere something zipped by me and landed on a pole maybe fifteen feet in front of me.  Holy shit. 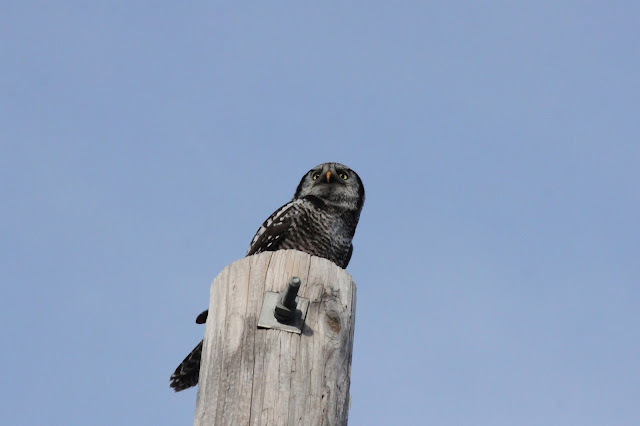 There was a freshly killed rodent in its talons, though it had trouble deciding exactly where to scarf it down.  Thankfully it picked a spot rather close to us. 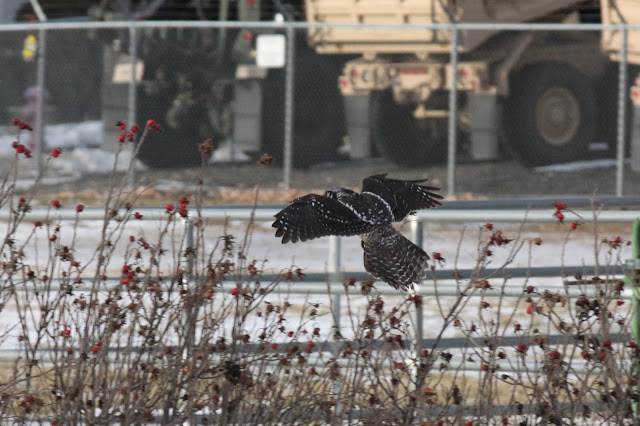 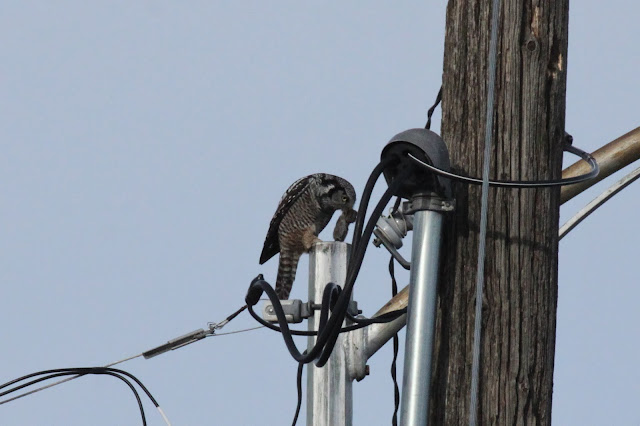 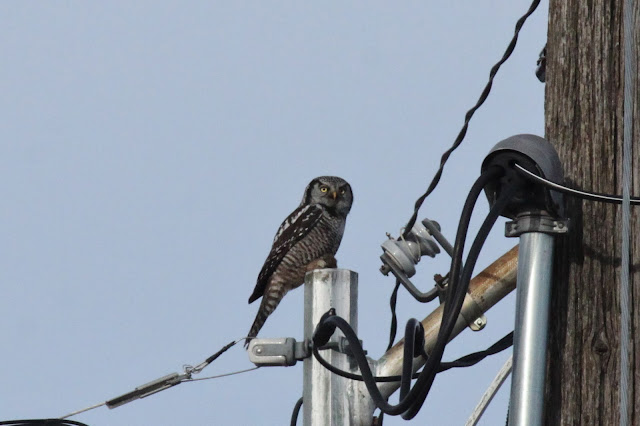 When the bird finished its meal it flew over to some power lines along White Ave north of the Safeway.  We decided to go in and grab some snacks and check on the bird afterwards.  Turns out it was still sitting on the power lines, apparently hunting. 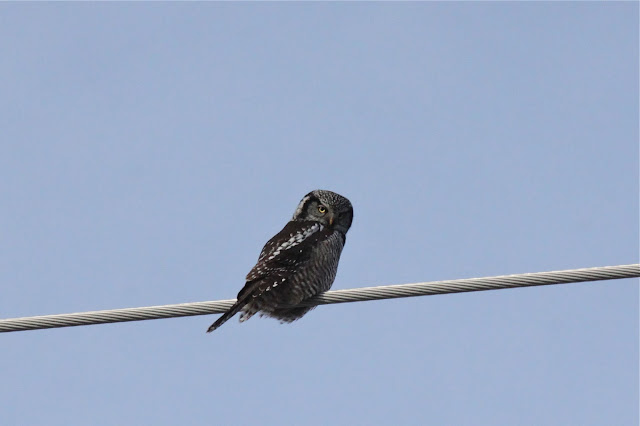 What a crazy encounter.  I can't believe this bird is just hanging out by a supermarket.  SO awesome.  After awhile we got back on the road to head back to Richland with a stop in the ghost town of Benge.  The town itself wasn't too exciting, so here's a nice dark morph Red-tailed Hawk instead... 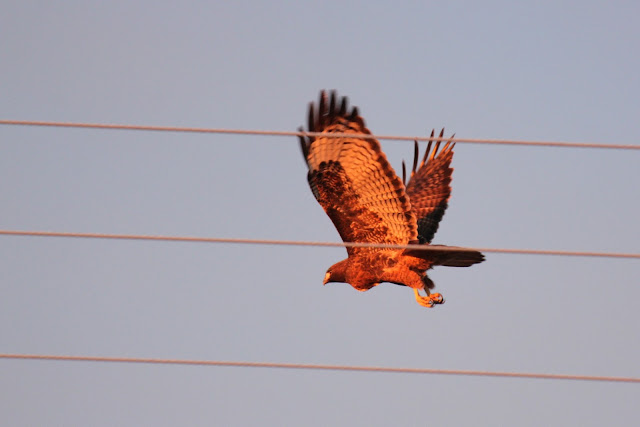 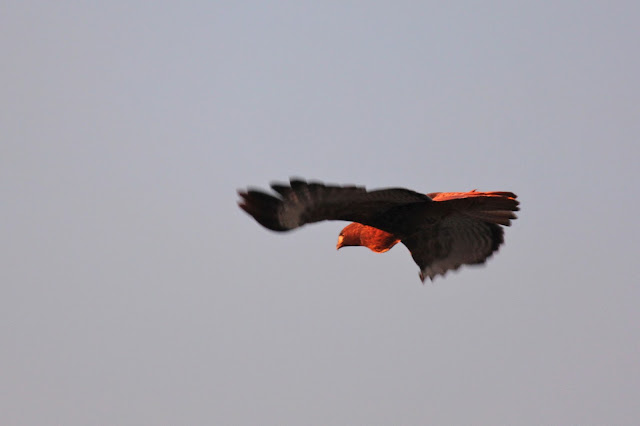 We stopped at a random spot with big piles of gravel to let the dogs out and were treated to yet another crazy sunset.  Perhaps related to the air stagnation warnings? 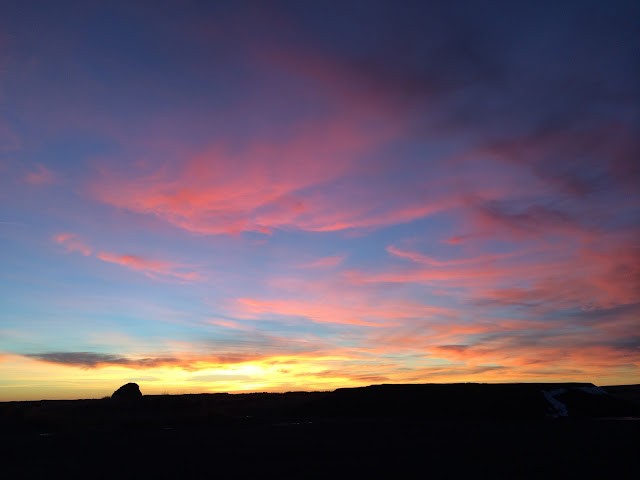 Yesterday morning the freezing fog was back and better than ever.  Despite that we drove out to Bennington Lake in hopes of finding Long-eared Owls.  Unfortunately, with the fog, we could barely even find the lake... 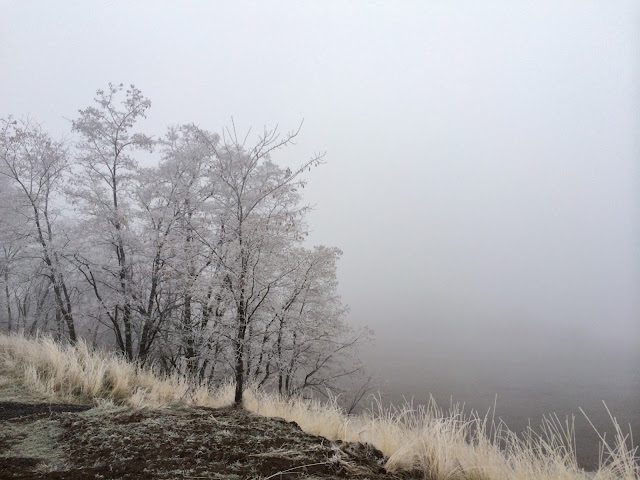 I was not even sure where to begin with finding owls, my own fault for not researching it enough.  So we just wandered trails in the fog, having no idea where we were or where we were going. 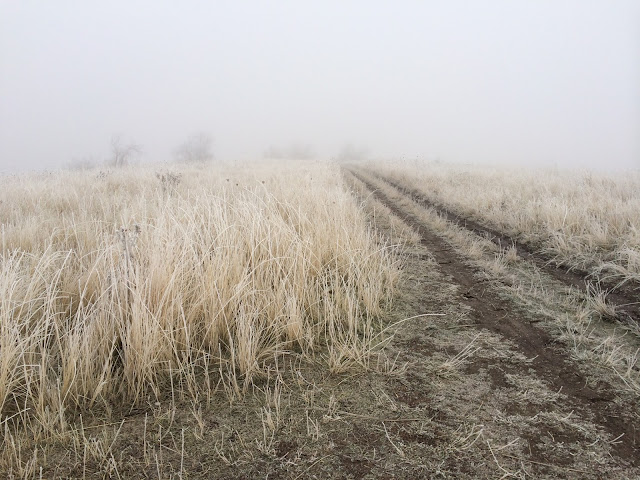 After finding the car again we kept driving, stopping to pet Izzy the camel and grab a cup of coffee in Waitsburg. 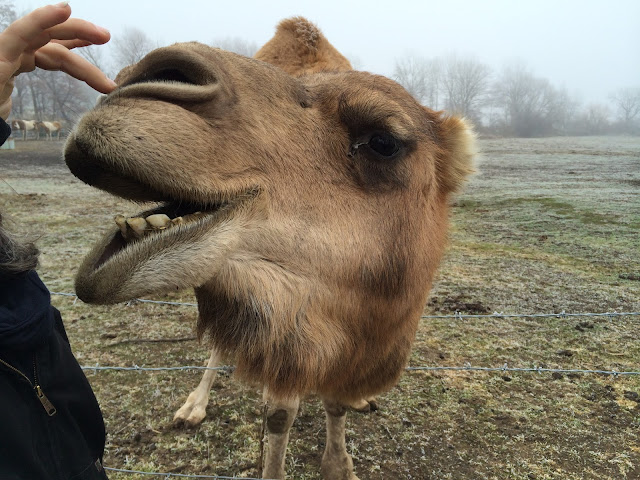 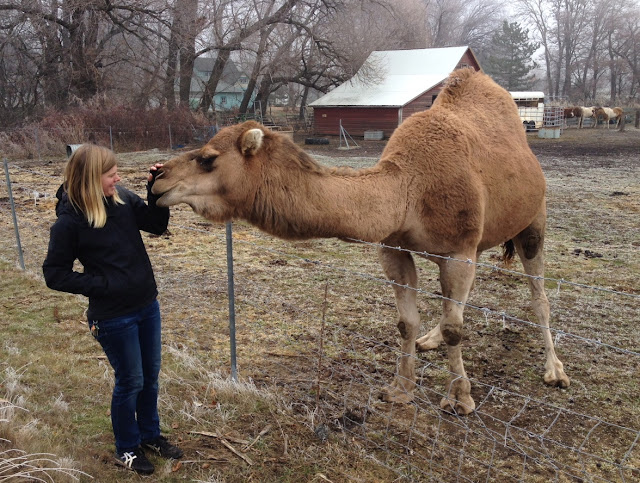 We also stopped to check out some magpies at one of the orchards we passed... 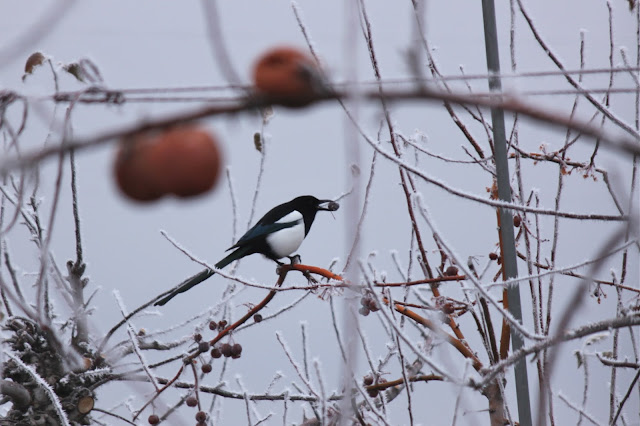 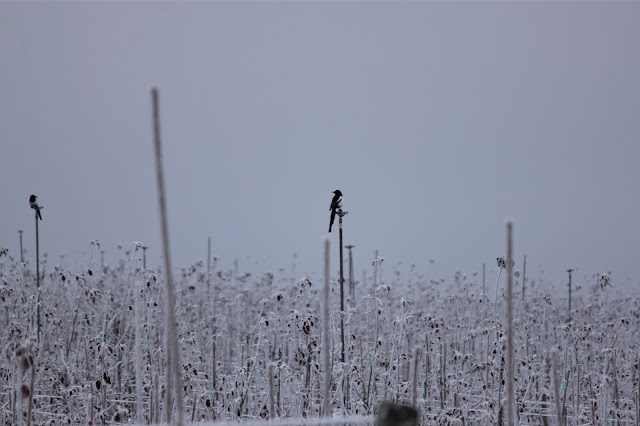 Our last stop along the Snake River held another Northern Saw-whet Owl, the same individual I saw with Rhett on my last eastern Washington trip.  This time I was able to see the bird without actually entering its shrub so I managed a few quick shots before leaving it alone. 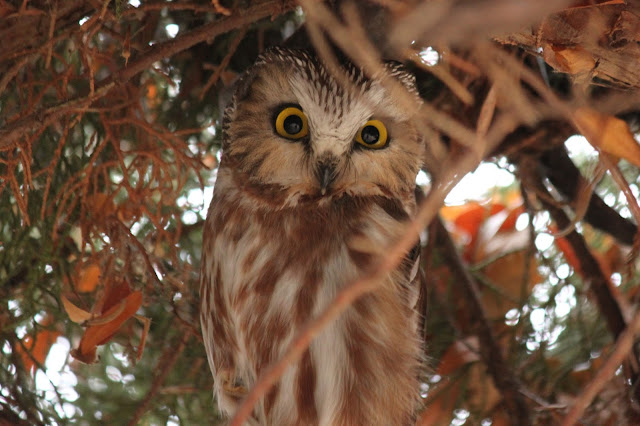 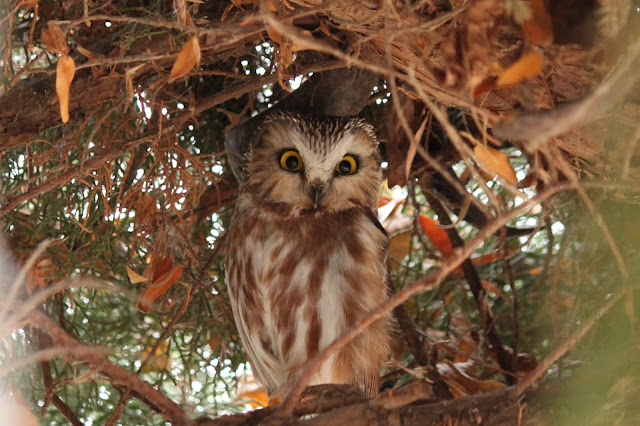 After that we headed back to Portland, completely satisfied with this awesome adventure.  Good times!!! 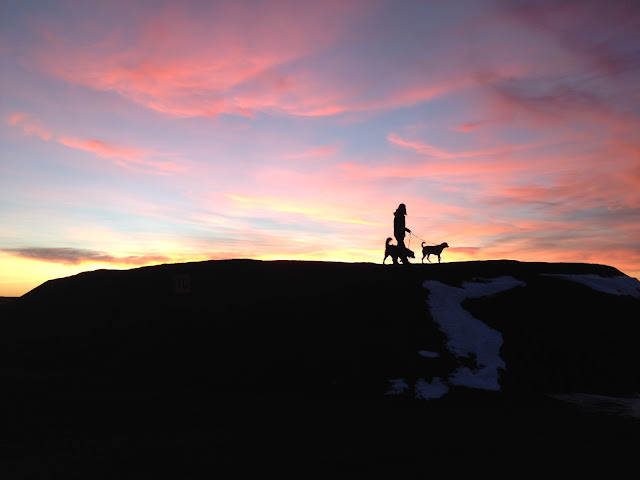