With a title like that, I'm surprised you're even reading this.  Gulls?  Sounds boring. 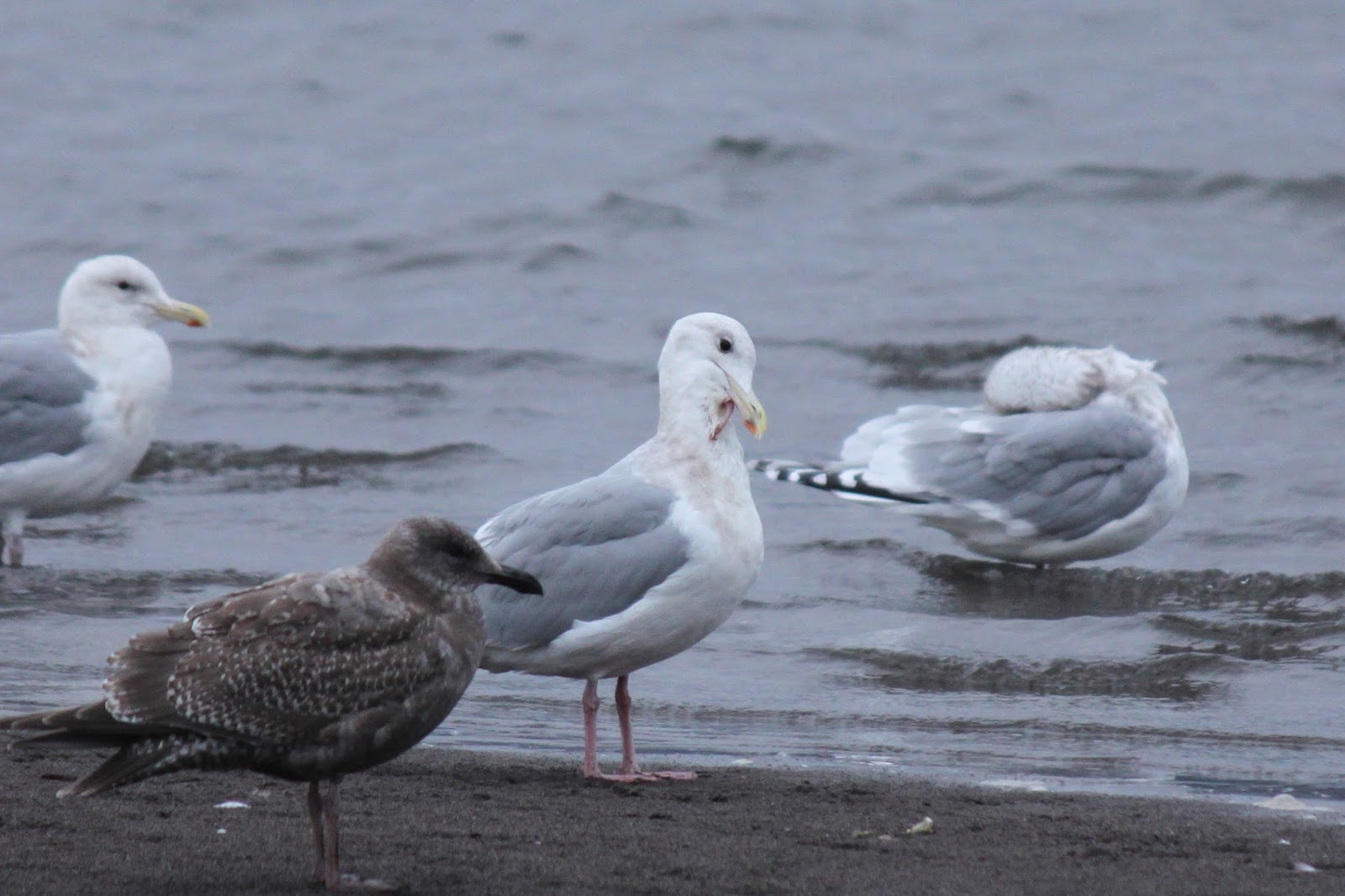 A gull scratching its own neck with ITS OWN TONGUE is decidedly not boring.  But the rest of this post probably will be so just quit while you're ahead and go elsewhere.

I walked down to Broughton Beach yesterday to nab some gulls for my motorless list.  Of course, the problem is that I have a lot of trouble with gull ID.  Who doesn't?  I could pick out some obvious birds like these Mew Gulls... 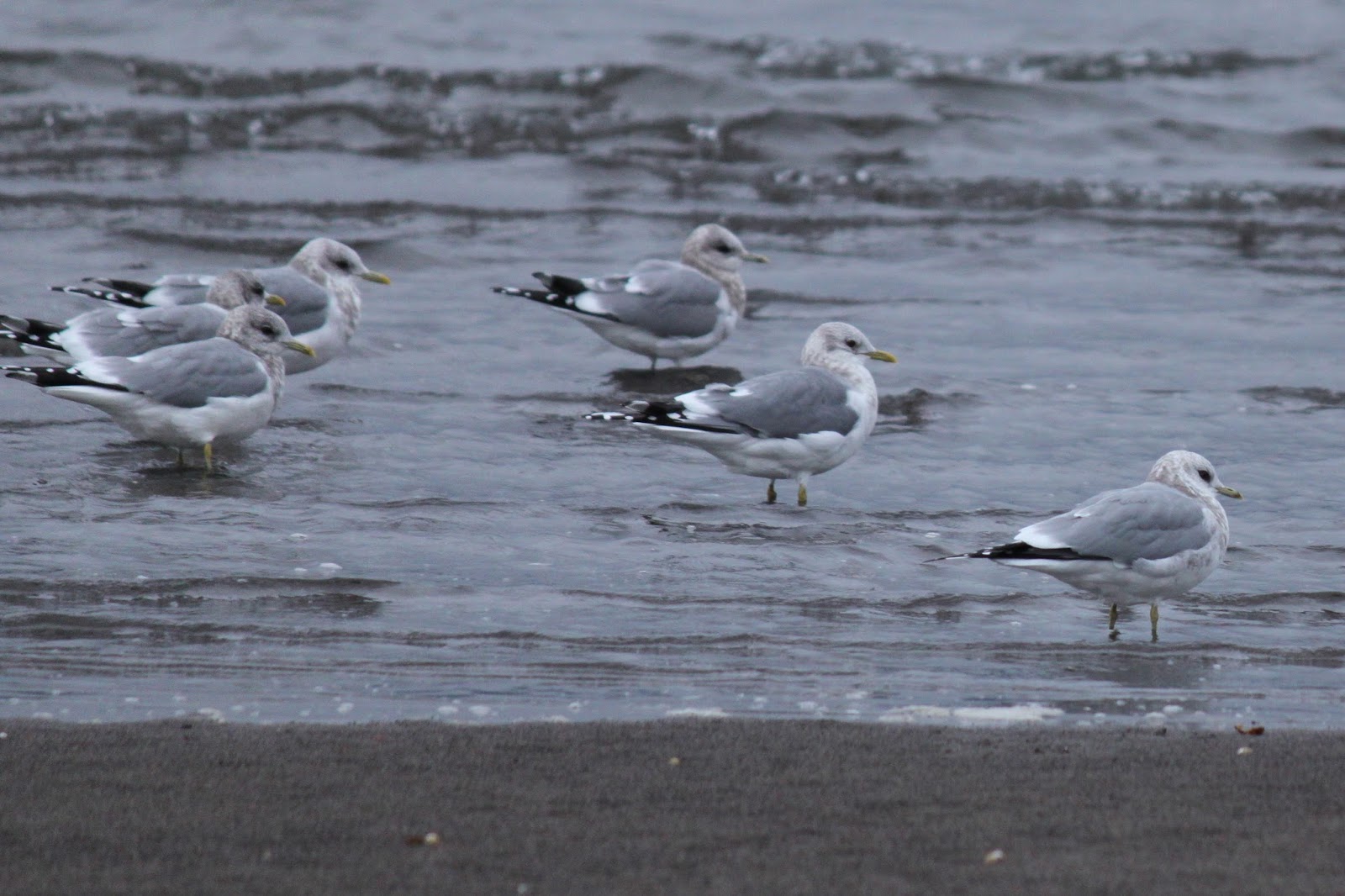 After that things get more difficult.  California Gulls are the second easiest for me, as long as they're adults... 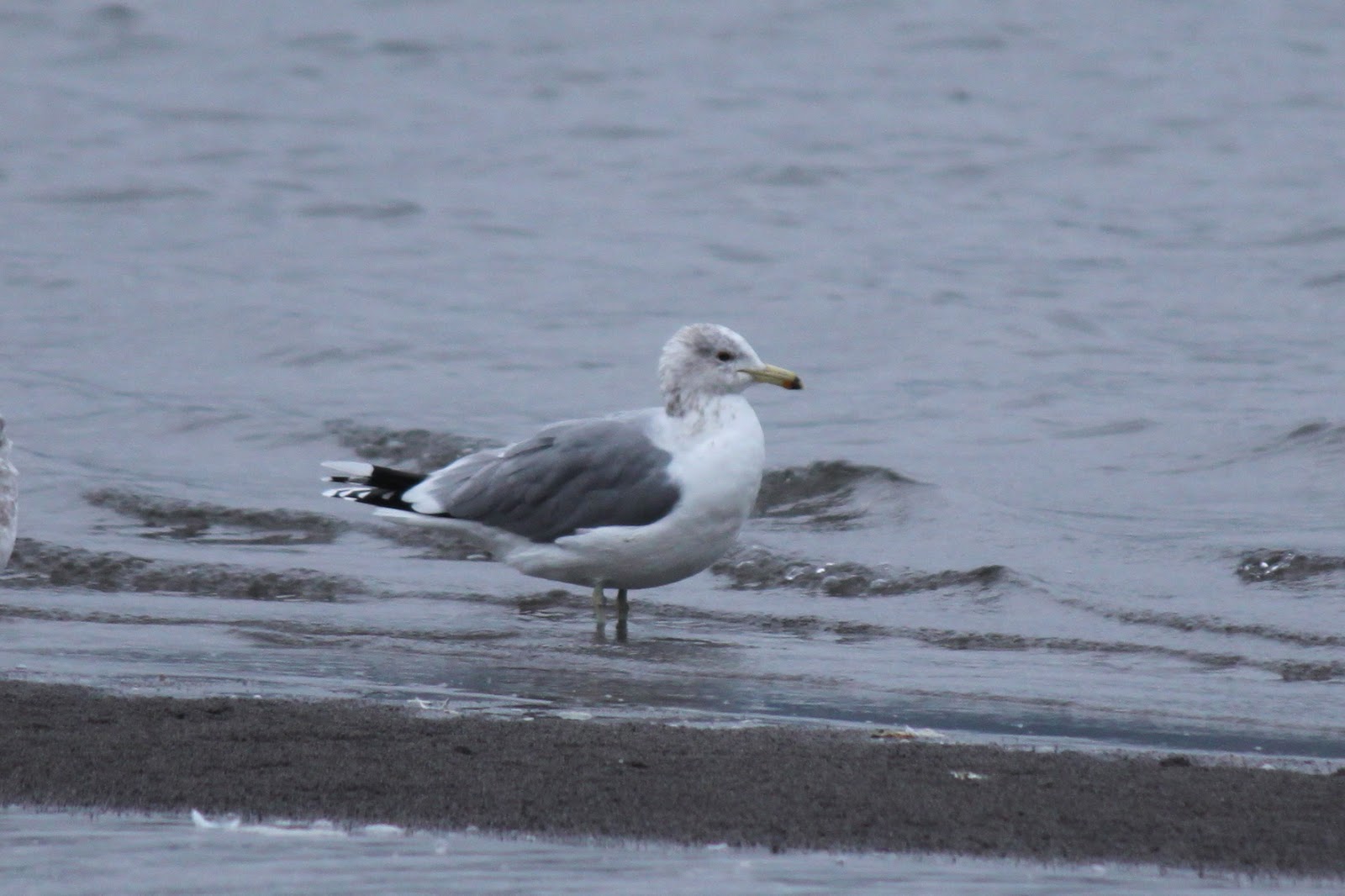 Now with the yellow-legged gulls (not the Yellow-legged Gulls) out of the way, time for the pink-legged monstrosities.  In the next photo I am ignoring the gull on the left, and focusing on the gull to its right. 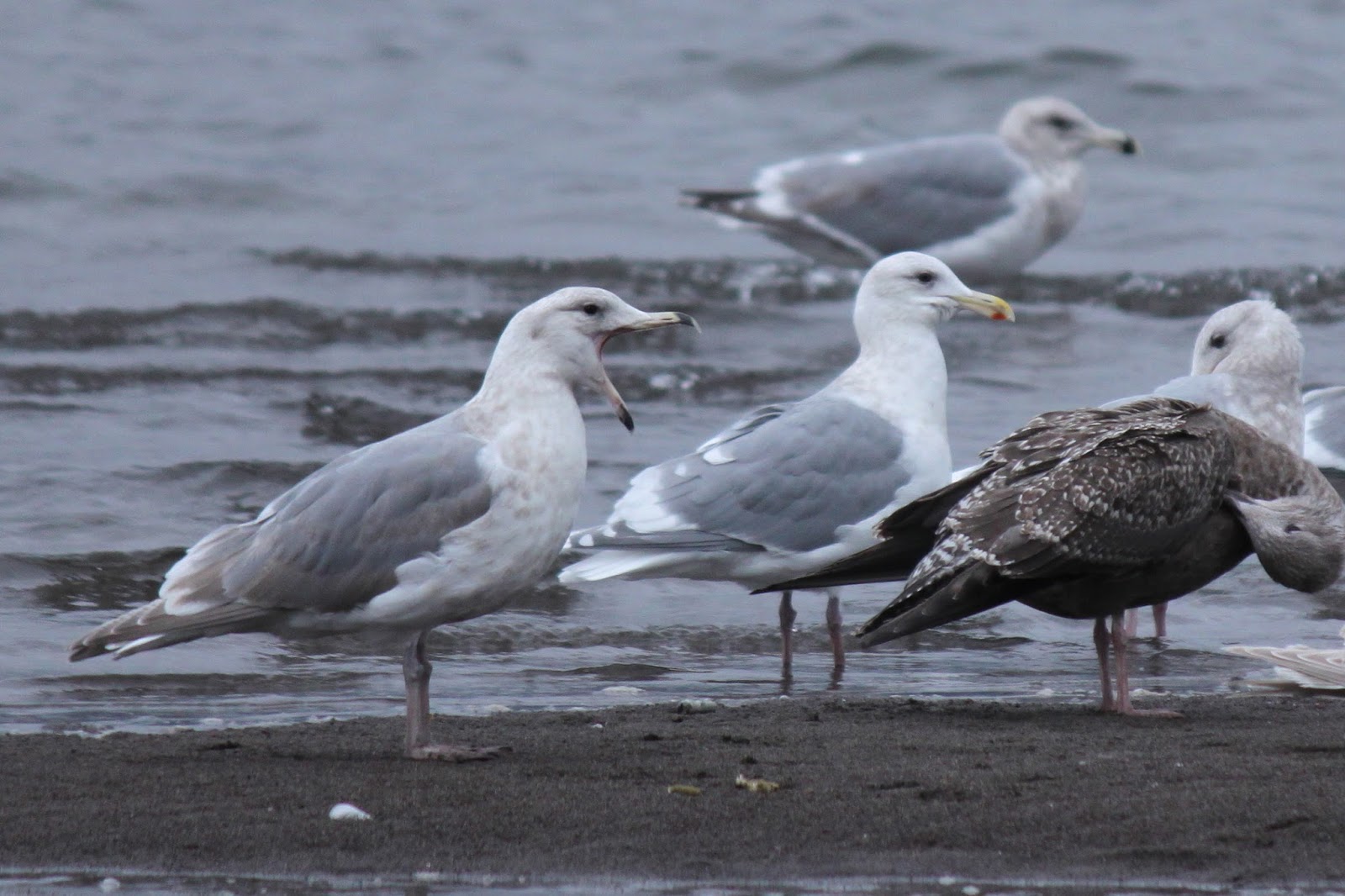 When I was at the beach I had thought this was a Glaucous-winged Gull.  But now looking at the photo and comparing it to Howell & Dunn, I am afraid there is not enough smudging to be pure?

For comparison, there was another gull that seemed Western but with a small amount of smudging.  The bill is also rather small, though the back looks nice and dark, darker than the rest of the gulls present. 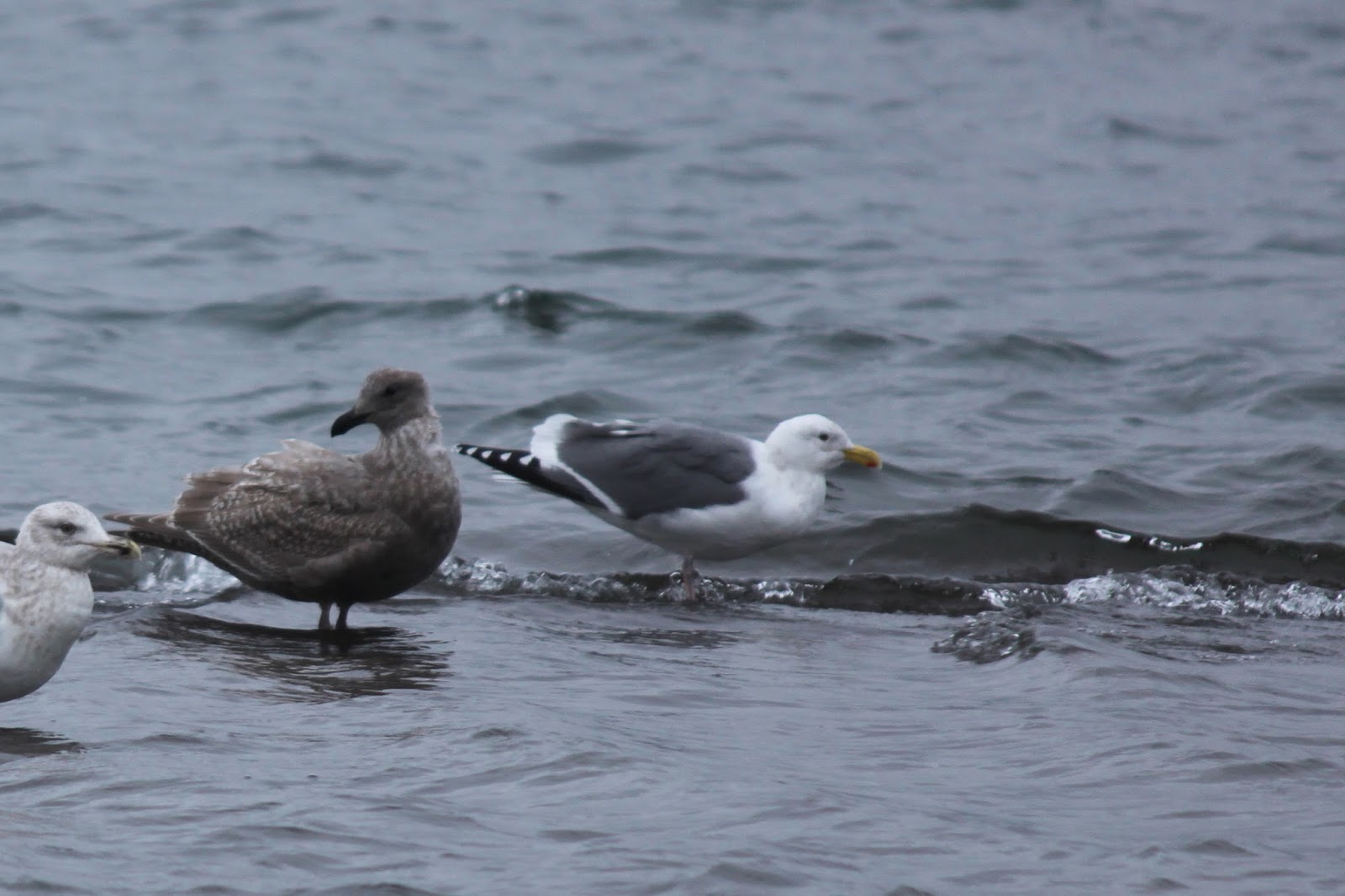 Are these both Western X Glaucous-winged, the hybrid of choice in the Pacific Northwest?  Thoughts always appreciated, especially when it comes to gull ID.

Moving on... I tried to find some Herring and Thayer's Gulls in the mix also.  In the next photo, the center bird (facing right) seemed like a good candidate for Thayer's at first.  The bill looked smaller and shaped right, the head shape looked okay though maybe too slanted, but the legs didn't look bubblegummy enough. 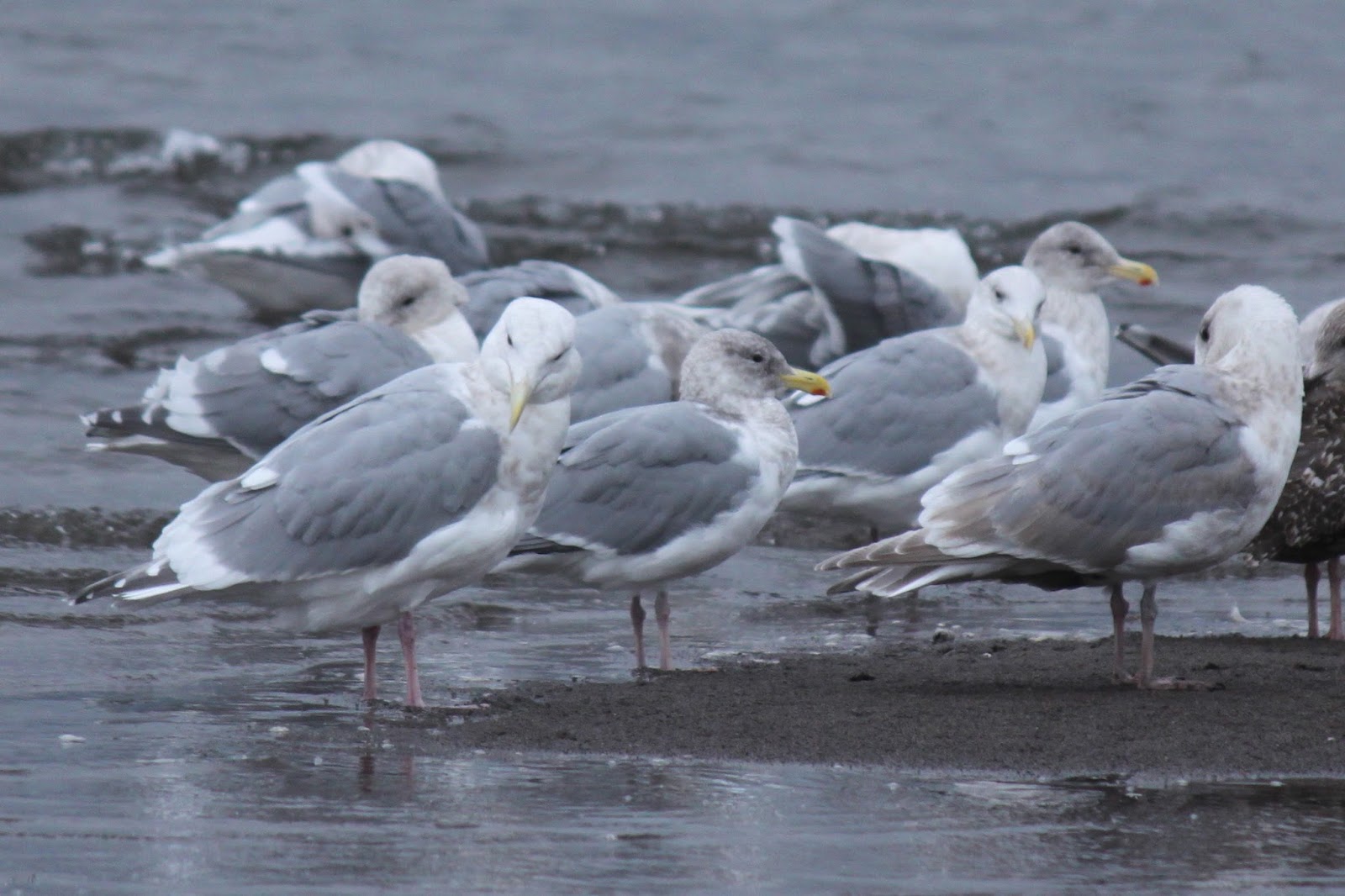 And of course the tail was completely blocked by the gull to the left.  Two gulls to the right of the center fellow also looked like a possible candidate but I could not convince the other gulls to move.

One last gull before my brain explodes... This pale-eyed gull looked possible for Herring... 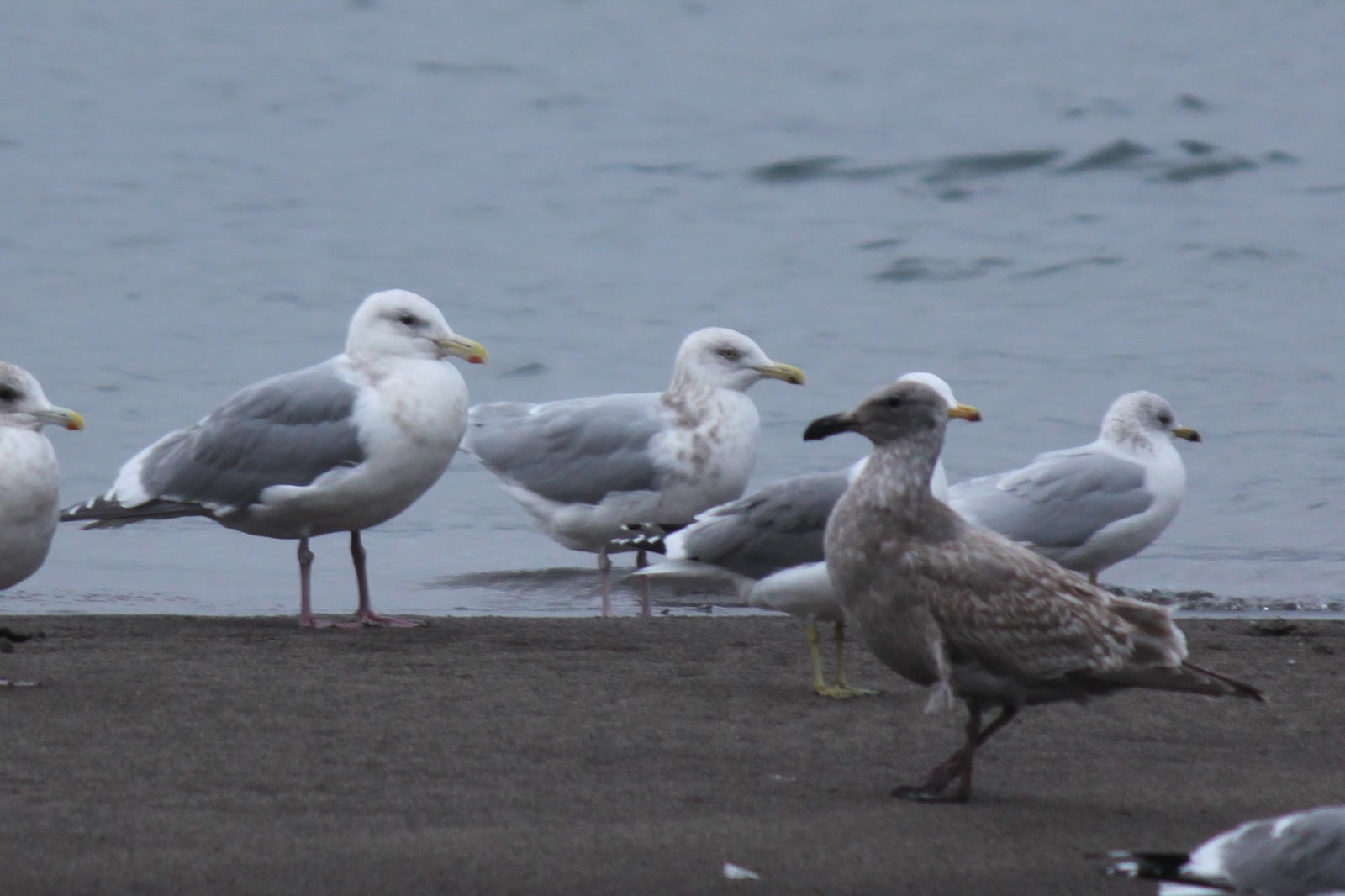 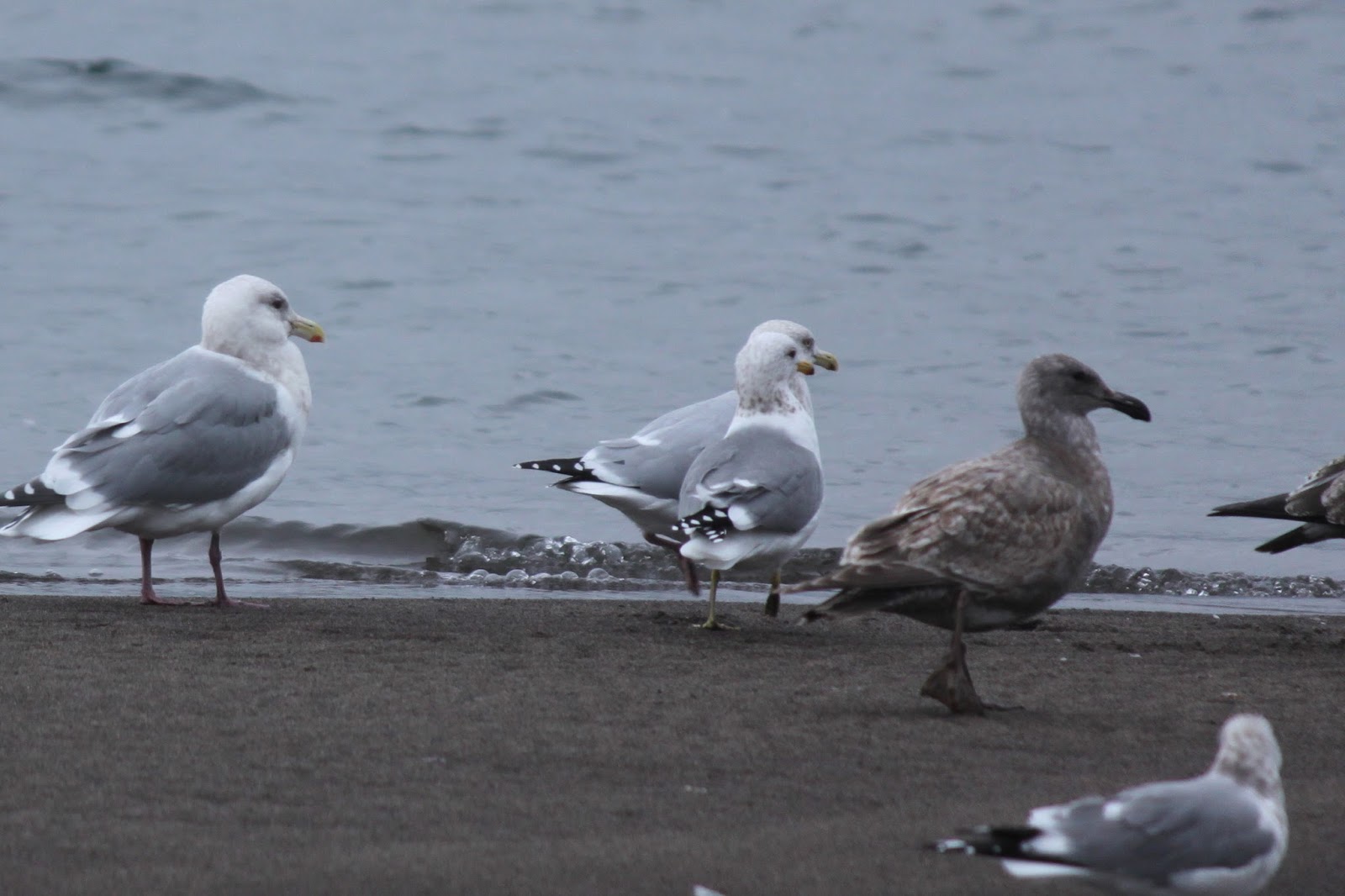 Oops I lied.  One more gull question and photo.  I noticed this gull with a blueish base to its bill- does this relate to ID or age or what? 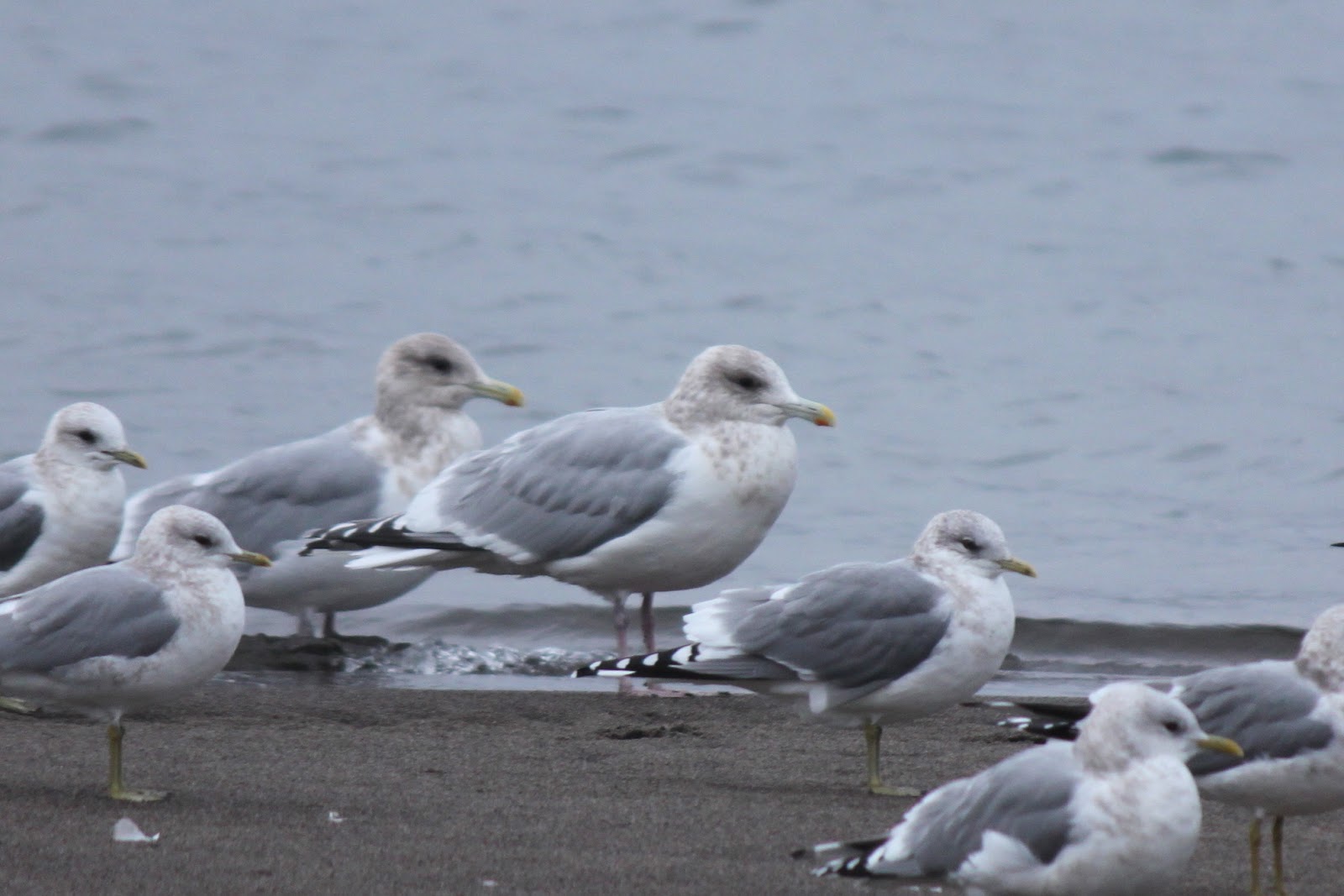 It had been a long time since I really stared at some gulls.  I want to like them so bad.  Kind of like when I decided I should really like peanut butter.  I hated it, but it looked so yummy and creamy.  I made myself eat a slice of toast every day with peanut butter and eventually I loved it.  So basically someday I might love gulls if I eat a slice of toast every morning with some gull on it.  Good times. 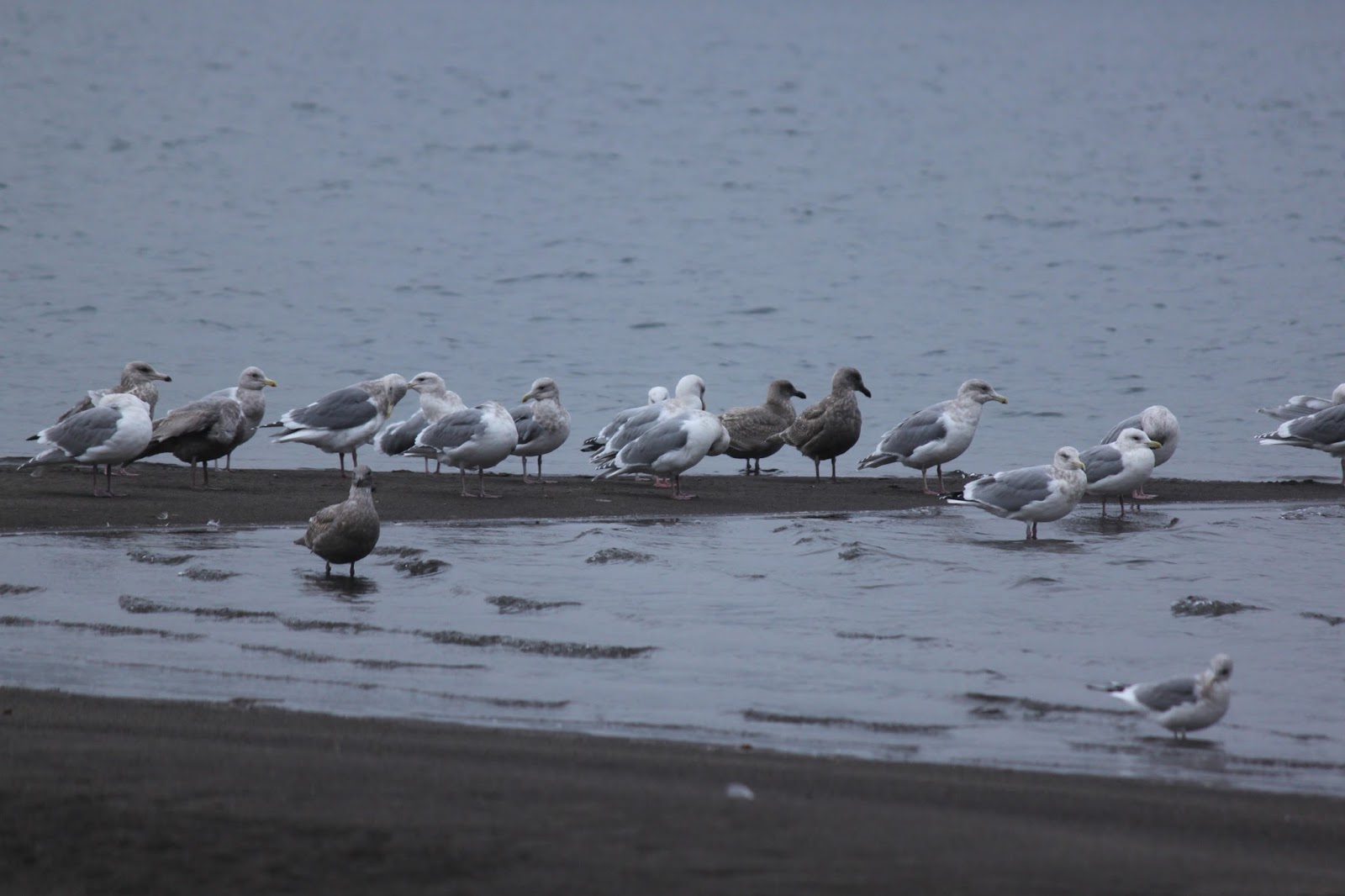