It's been a busy week, gearing up for this Saturday's big Taken For Granted Challenge and trying to get some birding in as well.  Before we get to that, let me finally share this bad phone video I shot through the blinds of my bedroom window on Thanksgiving morning.  I heard weird sounds outside while I was packing for Coos Bay and half expected to find my neighbor's chickens had escaped.

Crank the volume to really hear the sounds.  I had never witnessed this behavior from a Cooper's Hawk.  Anyone know what his deal was? 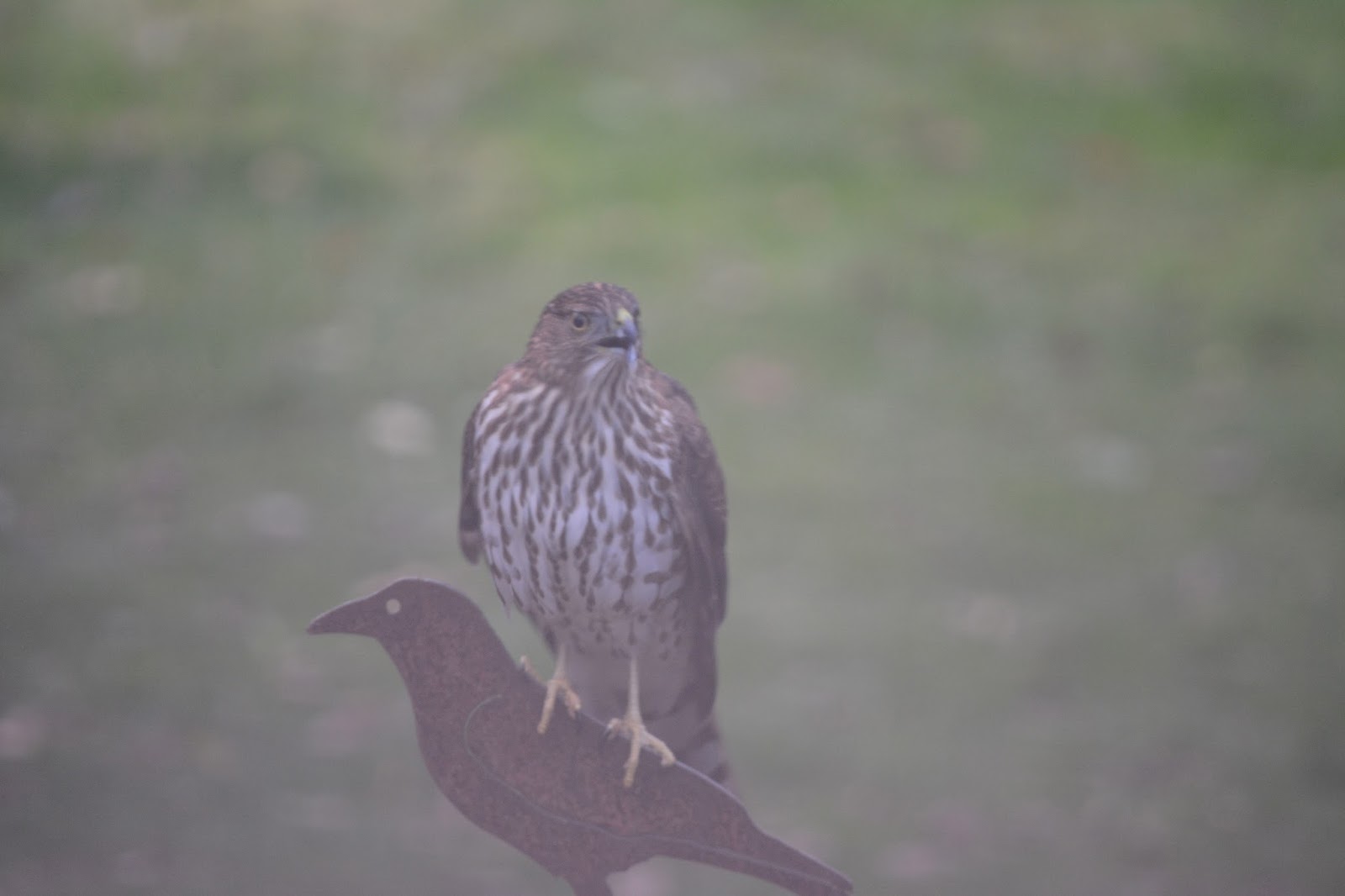 Bad window shot, but so stoked he's perched on my rusty crow!

On Tuesday I walked the dogs to Broughton Beach to try to add a couple birds to my motorless list, stopping briefly to poke this busted dead flicker (photographed a couple days earlier): 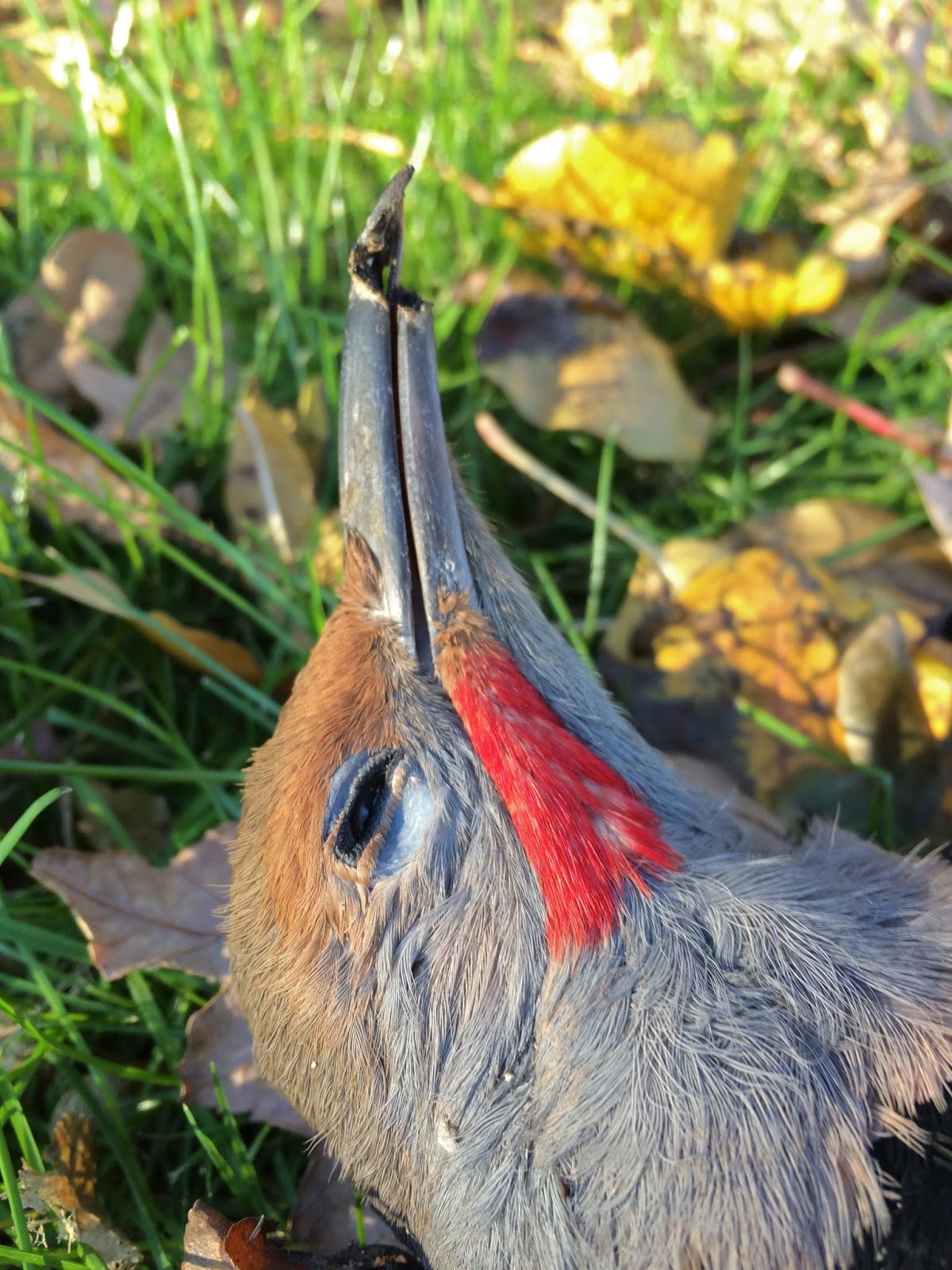 It was a lovely frosty morning... 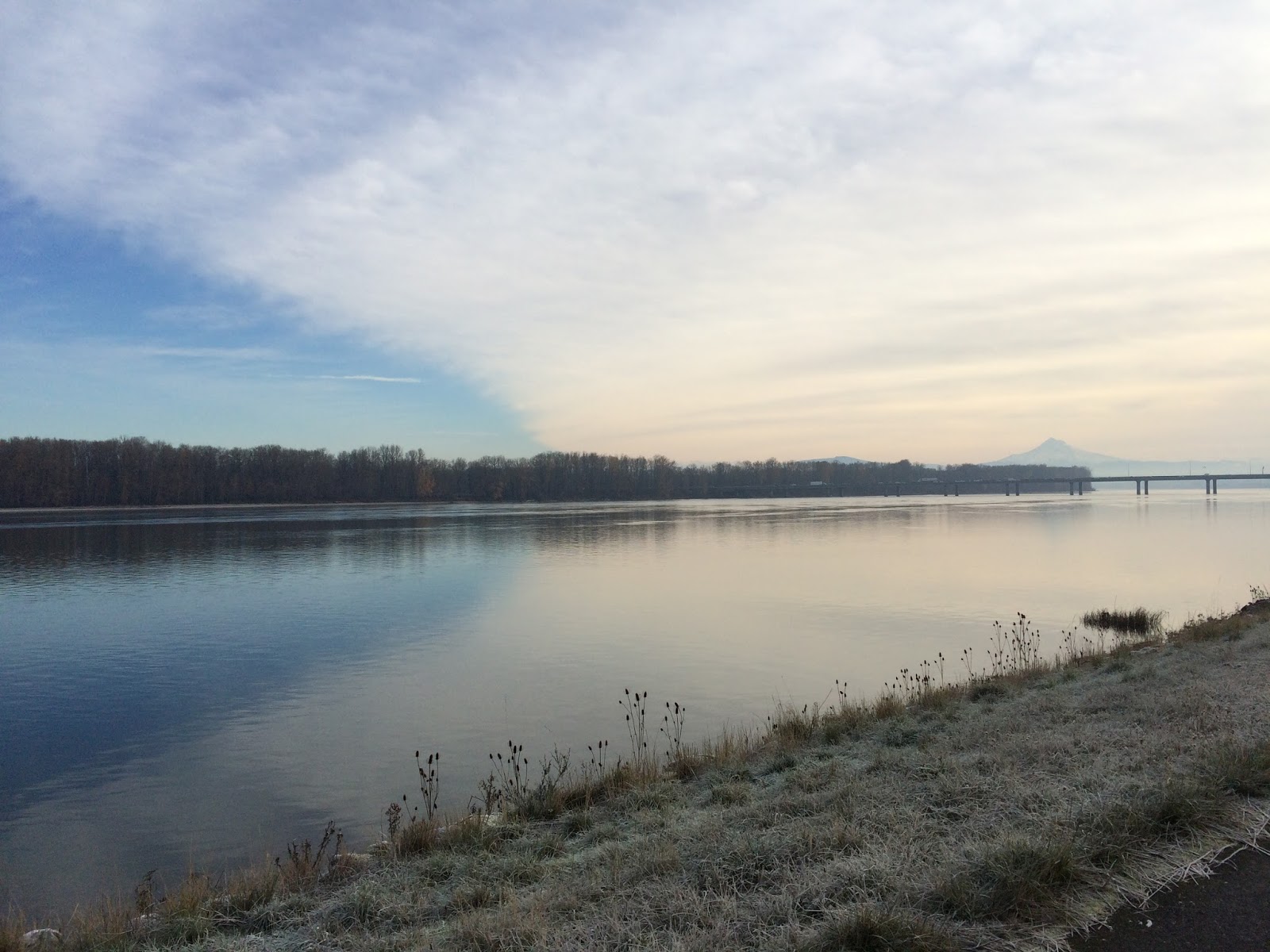 Along the bike path the most common birds were geese and Common Goldeneyes. 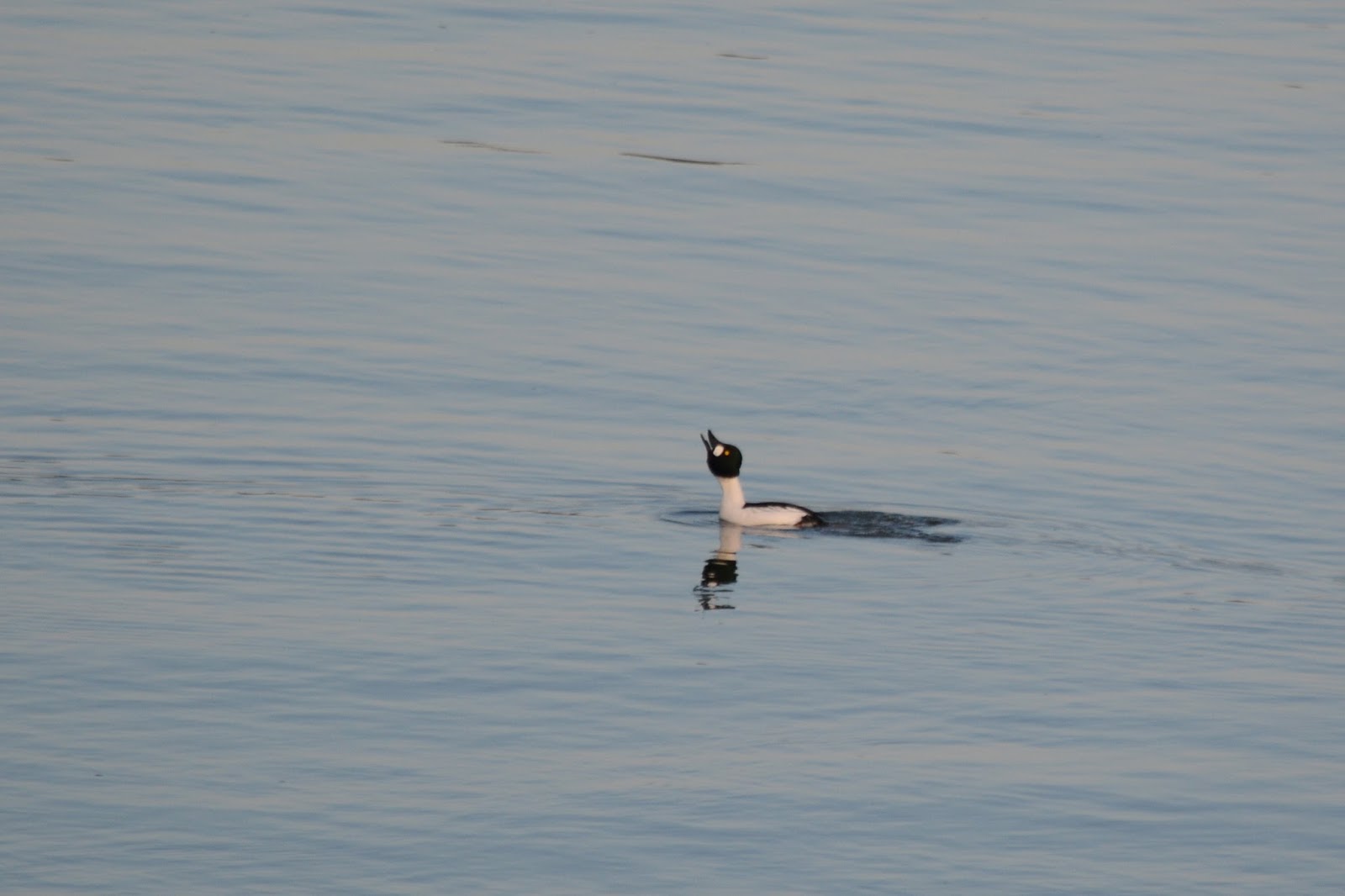 I finally had the Sea Scout Base in my sight when I noticed a large raft of scaup out on the river.  I walked up to the edge of the grass and dang it, my target Short-eared Owl flushed from the rocks below.  I got some terrible photos as it flew west but none worth sharing.  I kept walking, hoping I could relocate the bird on the way, or maybe find another.  Instead I found a kestrel as it successfully snatched a rodent from the grass. 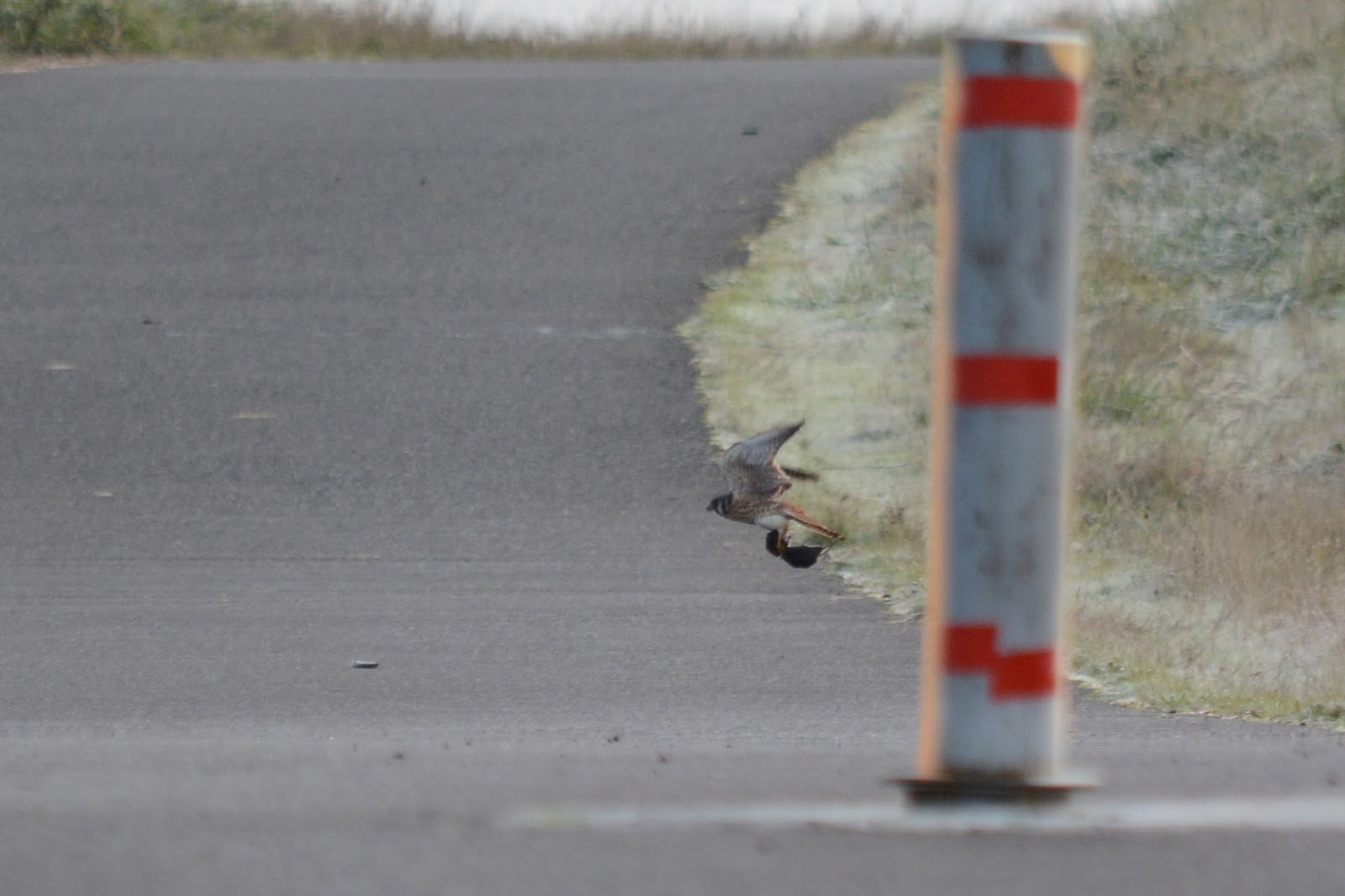 I walked the dogs down along the trail where I found the tree sparrow, hoping for more owls.  Some birders I didn't recognize said they had no luck coming from the other direction, but I kept walking just in case, and tried to direct them to the one I had seen.  Farther up I ran into Tait who also was not having any luck, and then went on over to the old PDX Airport Fire Station lot.  The goal here was some reported Snow Buntings that quite frankly I'm not sure ever existed to begin with. 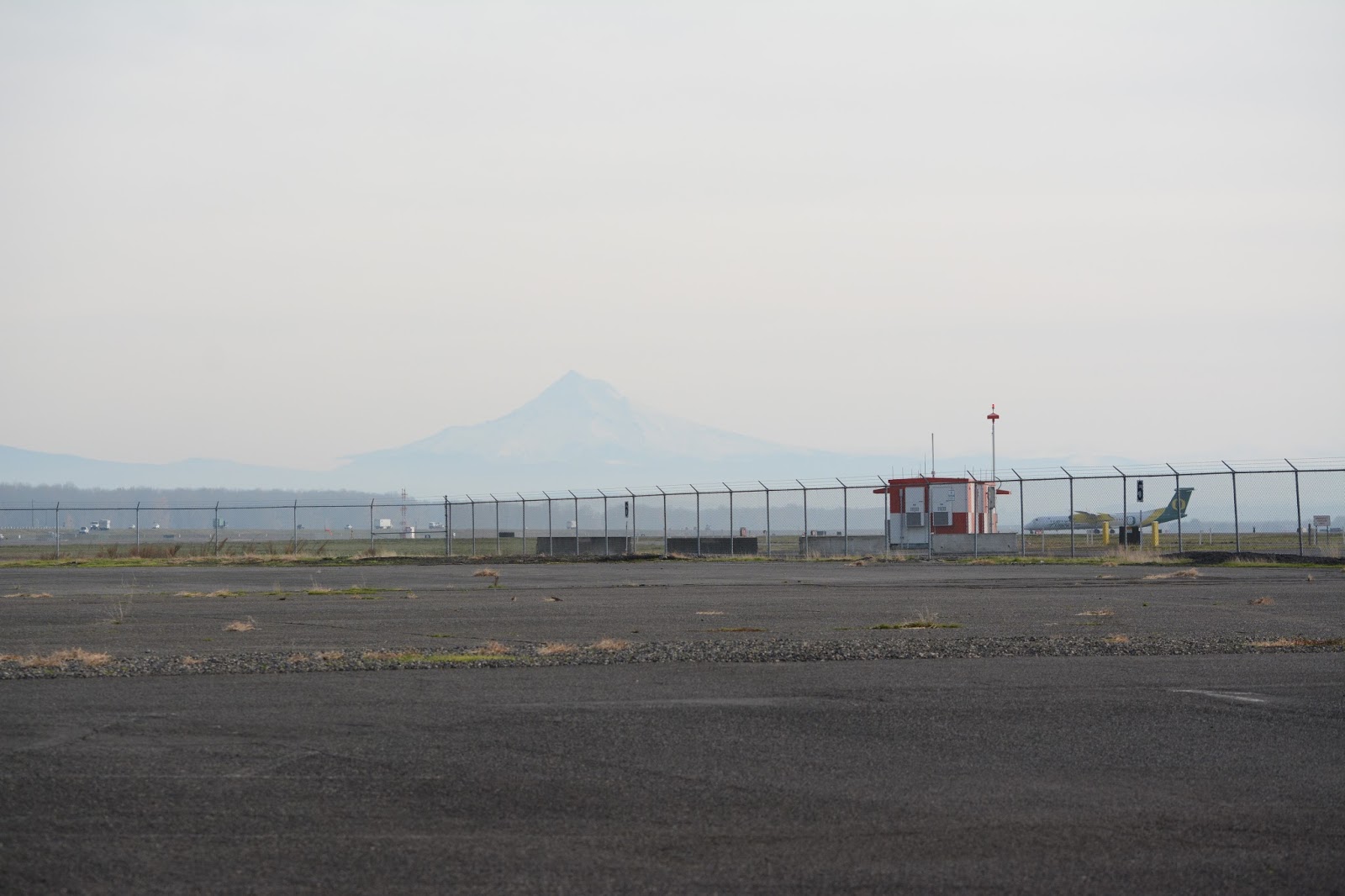 This random lot did host a single Snow Bunting a few years ago but on this day there were only 11 Horned Larks poking around.  We walked back up to the bike path and started to make our way home.  I figured I would stop where I had seen the owl earlier, in case it had returned, but of course couldn't remember exactly where it was.  I picked a random spot to walk out to and BOOM, a Short-eared Owl flushed from right below me. 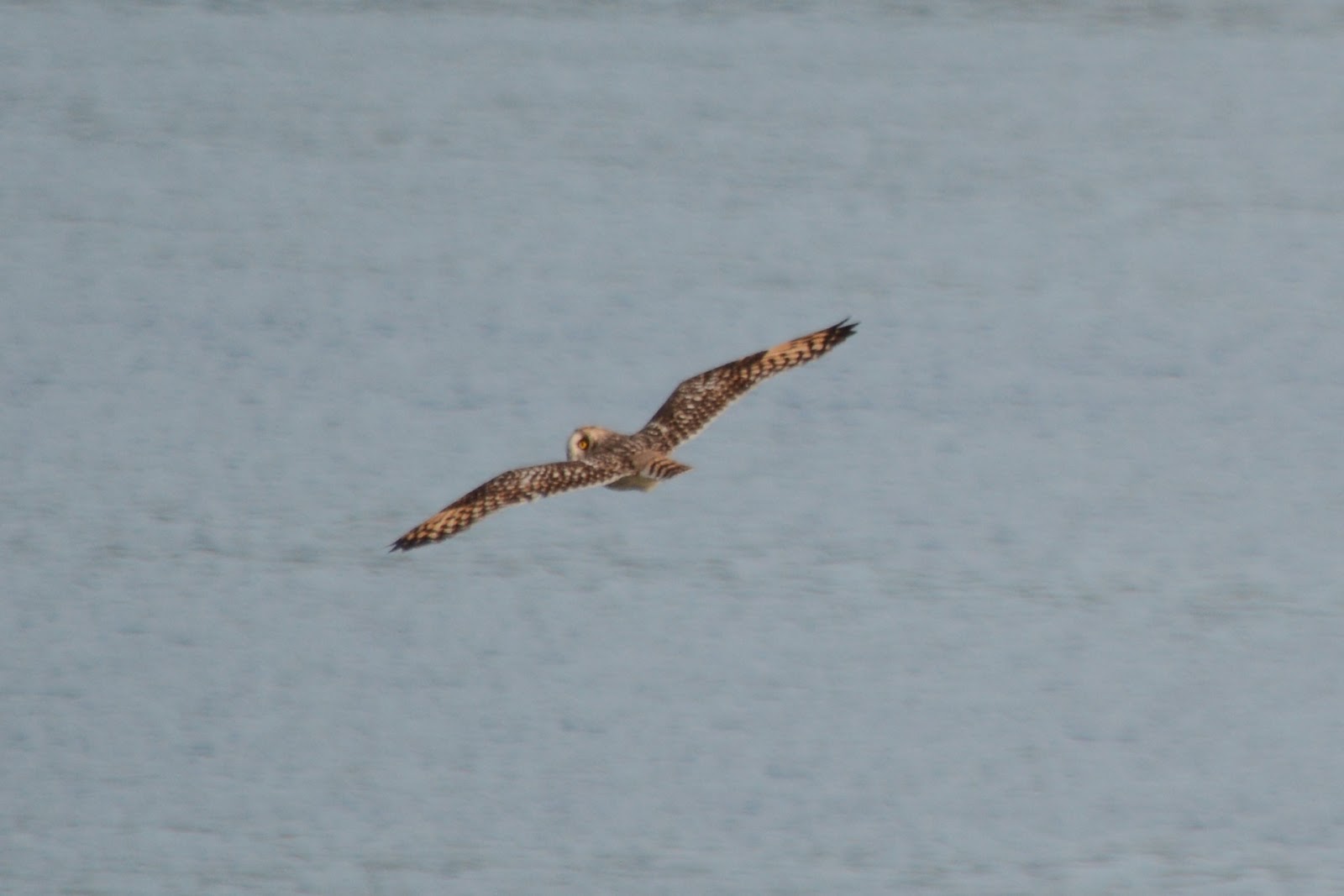 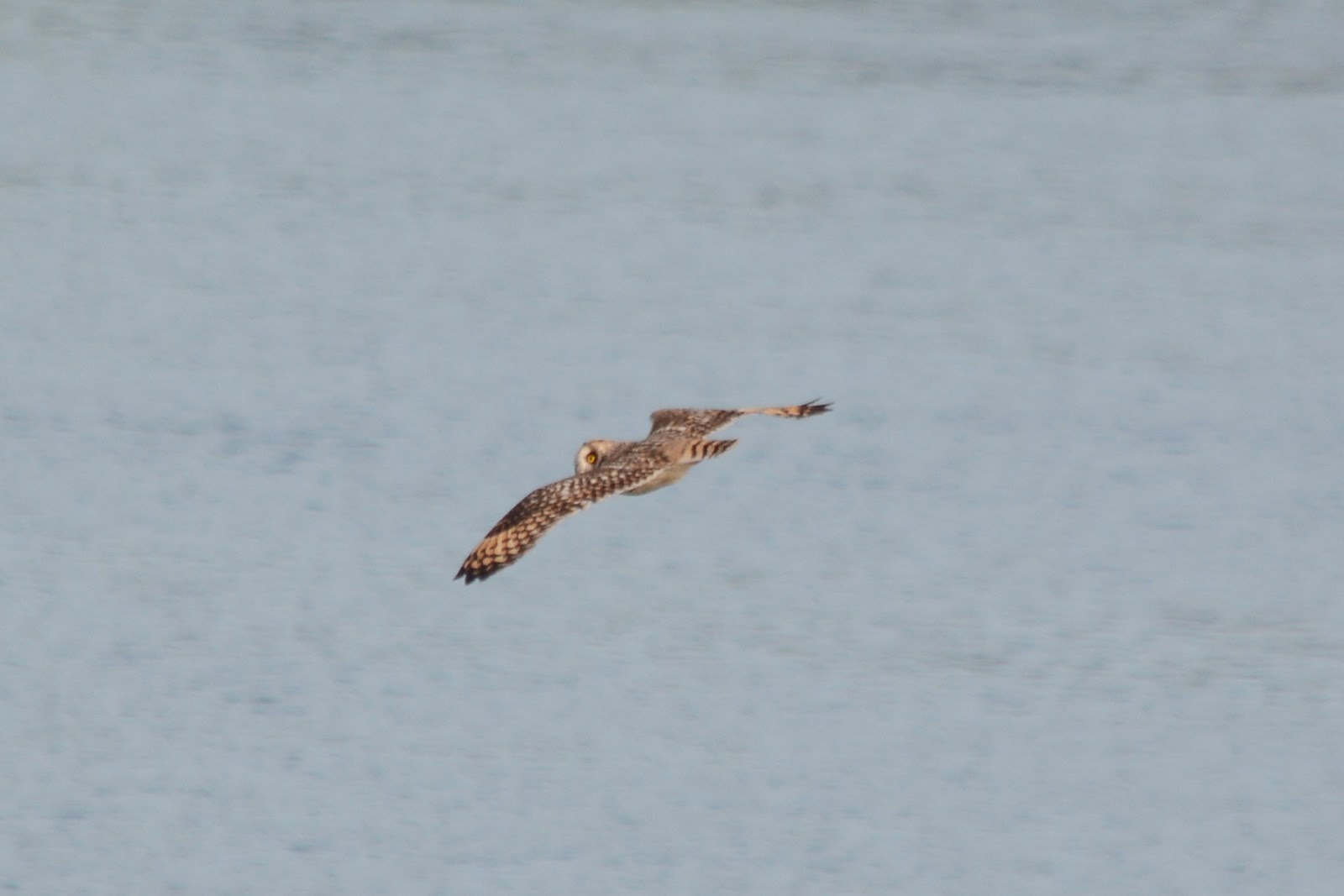 Not the best photos, but motorless bird #136 for the year!  This means I am officially doing better than last year.

On the walk home by Mays Lake I noticed some recent arrivals loafing about on the water... 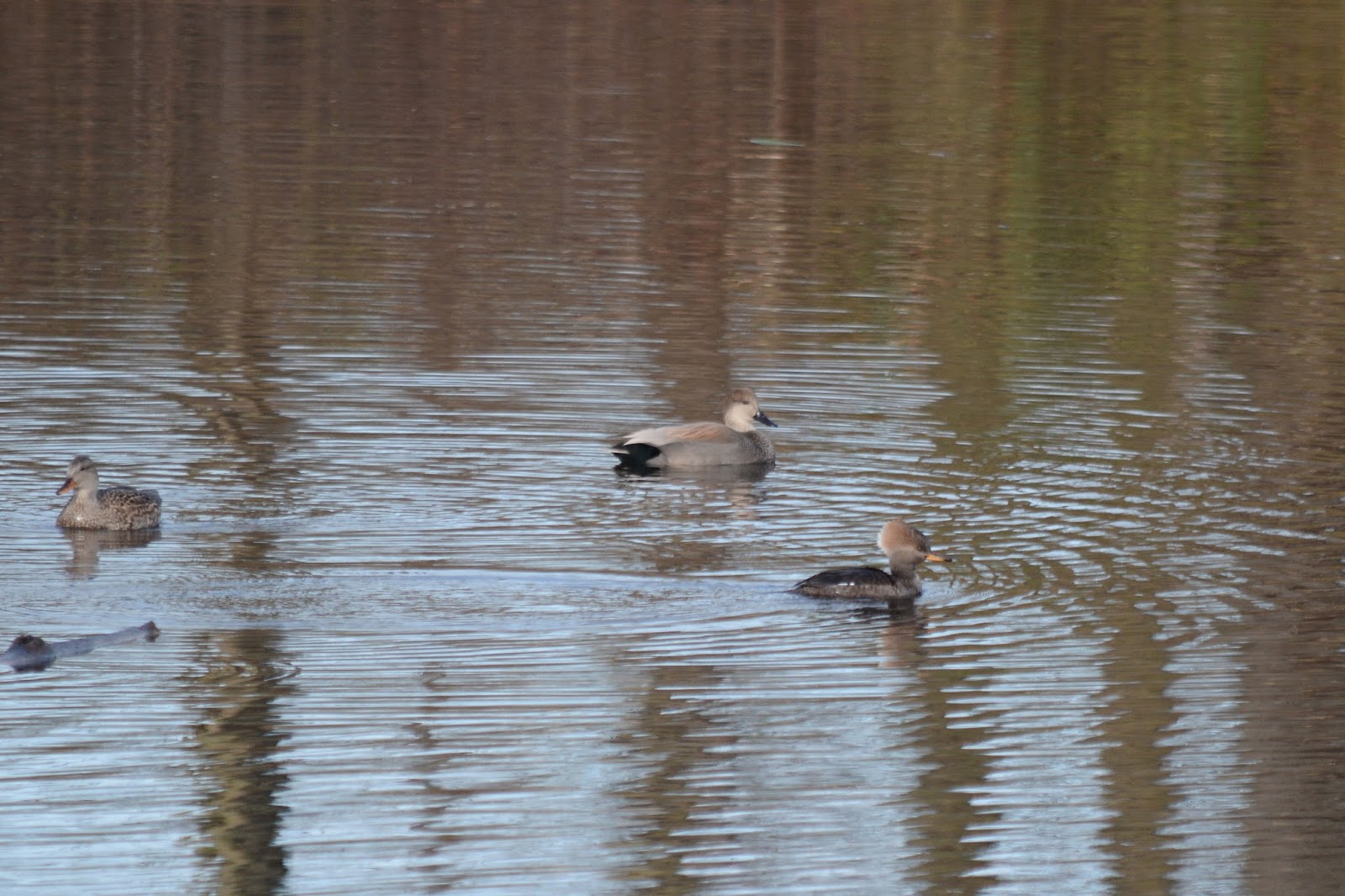 A flock of Bushtits came by and whispered some encouraging words about Saturday's challenge.  They were the only birds that saved me from complete humiliation last year, and I appreciated their impassioned chattering. 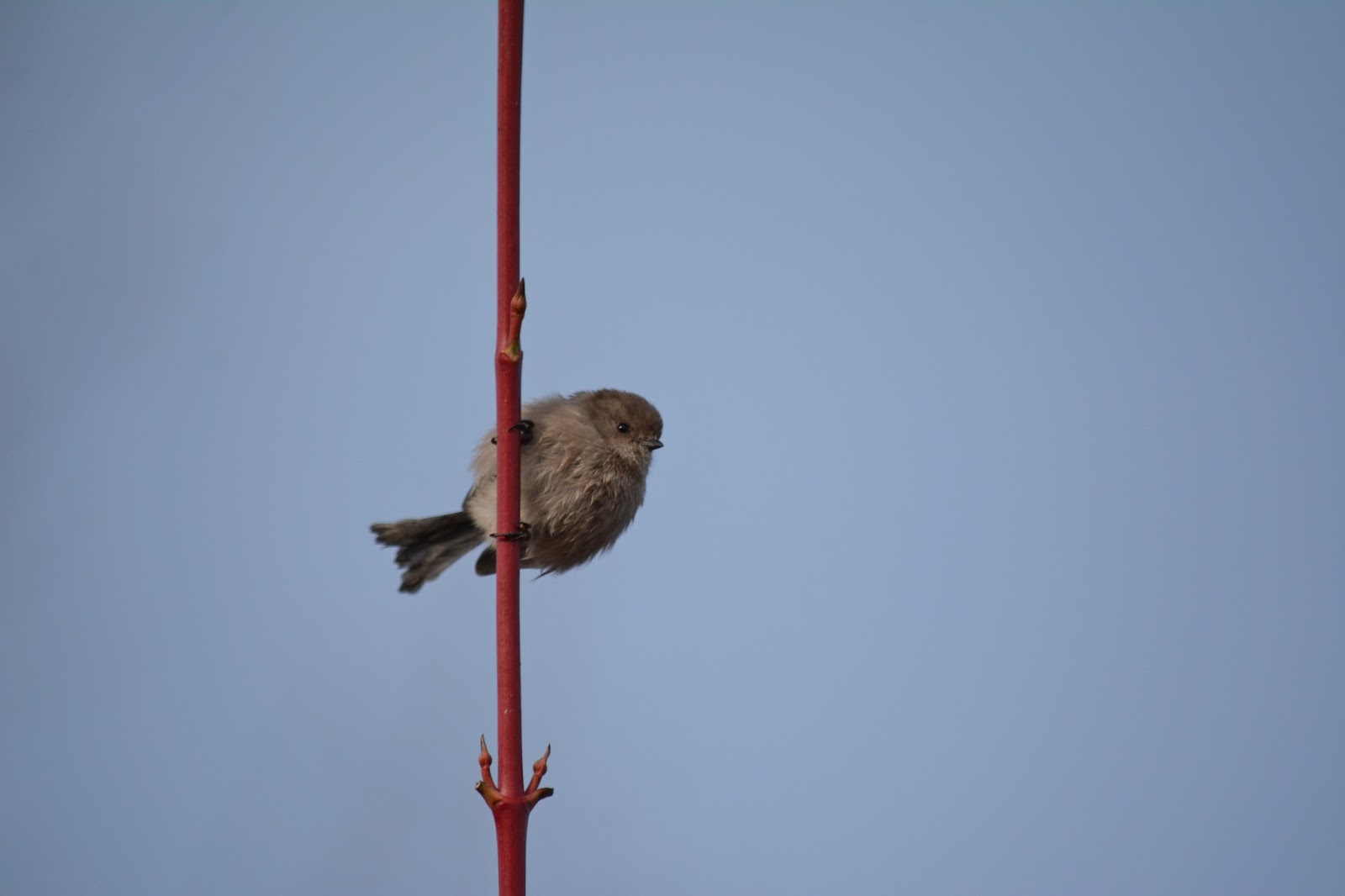 As I walked in the back gate at home I found another awesome surprise, a Varied Thrush digging in the leaves!  Only the second time I've seen one in my yard. 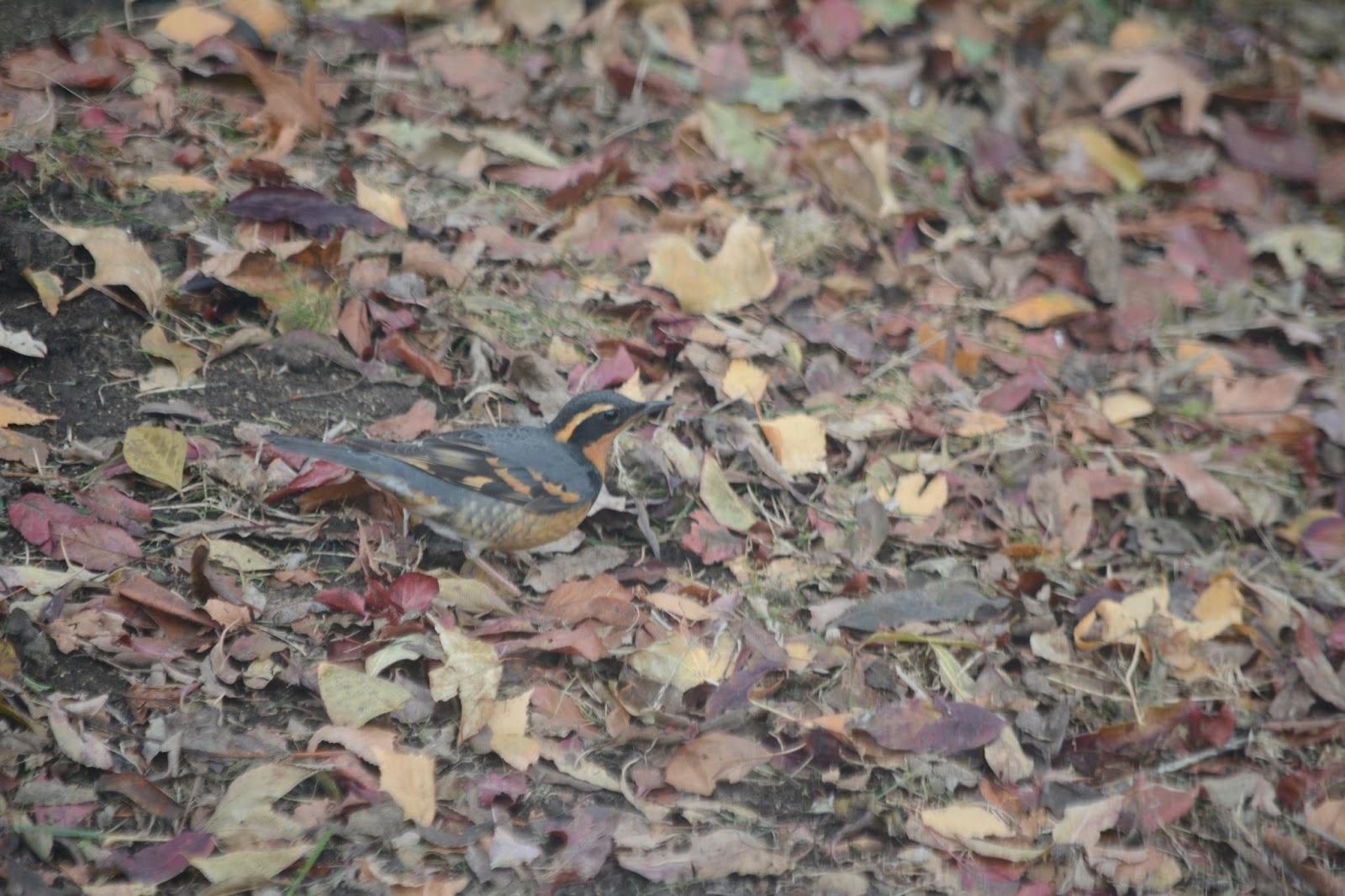