on January 28, 2015
No, this is not clickbait, but yes, I'm about to divulge a most embarrassing secret to you all:  I am terrible at scaup.  For the first two or three years of birding I never even said the word "scaup" out loud because I didn't know how to say it.  Now I rarely try to distinguish lessers and greaters unless I "need" to for a county bird, year bird, or some other ridiculous list.  I remember being at Lake Merritt in Oakland a couple years ago and seeing them up close and thinking how easy they were, so maybe it's just that I normally see them at a great distance?

I need to work on this.  I can feel eBird roll its eyes at me every time I enter "Greater/Lesser Scaup X".  Last week I walked over to Broughton Beach for my motorless list and found a lot of scaup close in on the river, a perfect opportunity for learning.  Let's begin. 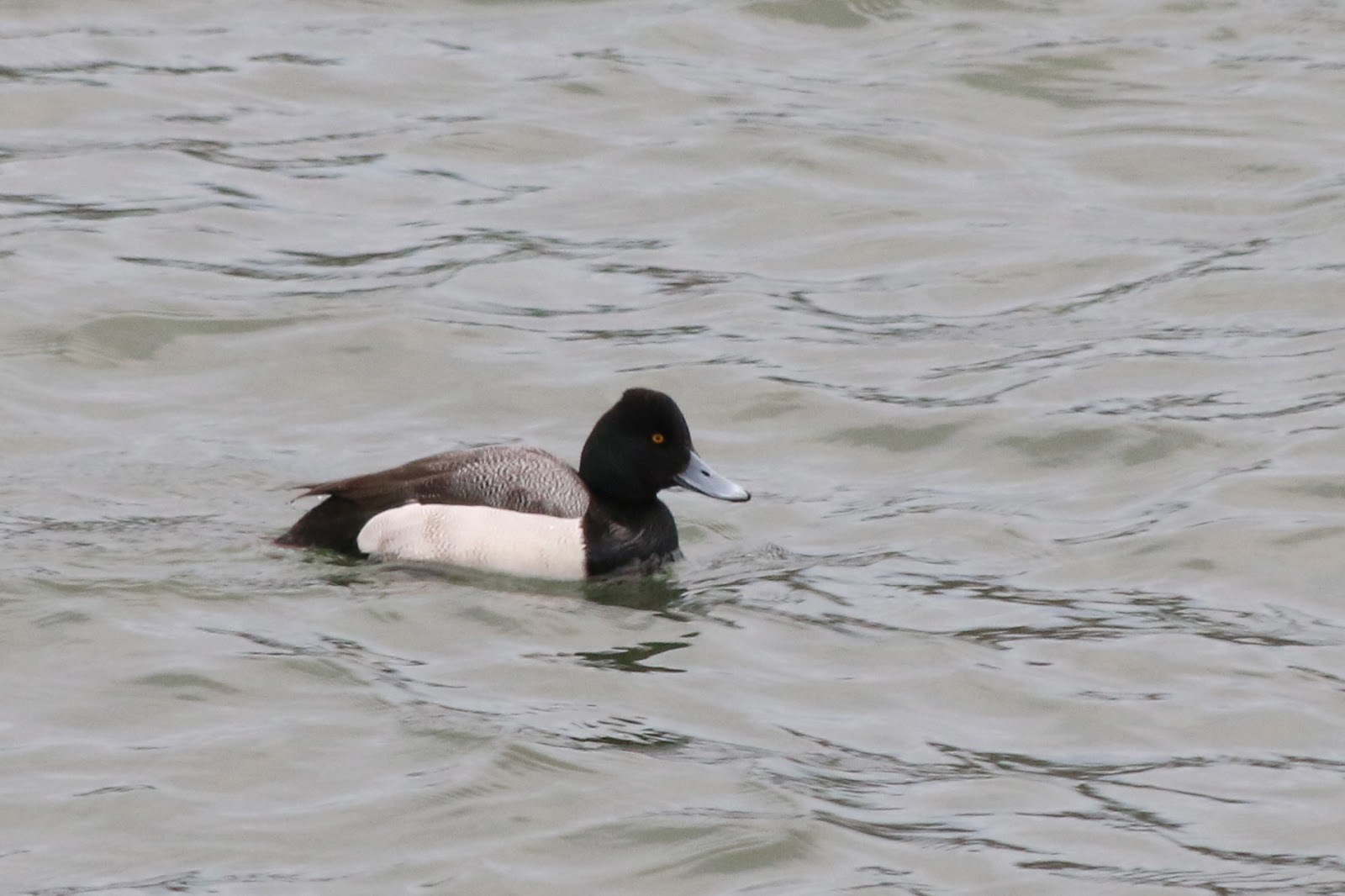 This bird above clearly has that head peak folks like to talk about for Lesser Scaup.  Is it that simple?  Am I missing something?  I don't know.  Below there are four scaup.  Scaups?  Scaup.  The far right lady looks to be a Greater, while the three trailing appear to be lesser with their head peaks and smaller size. 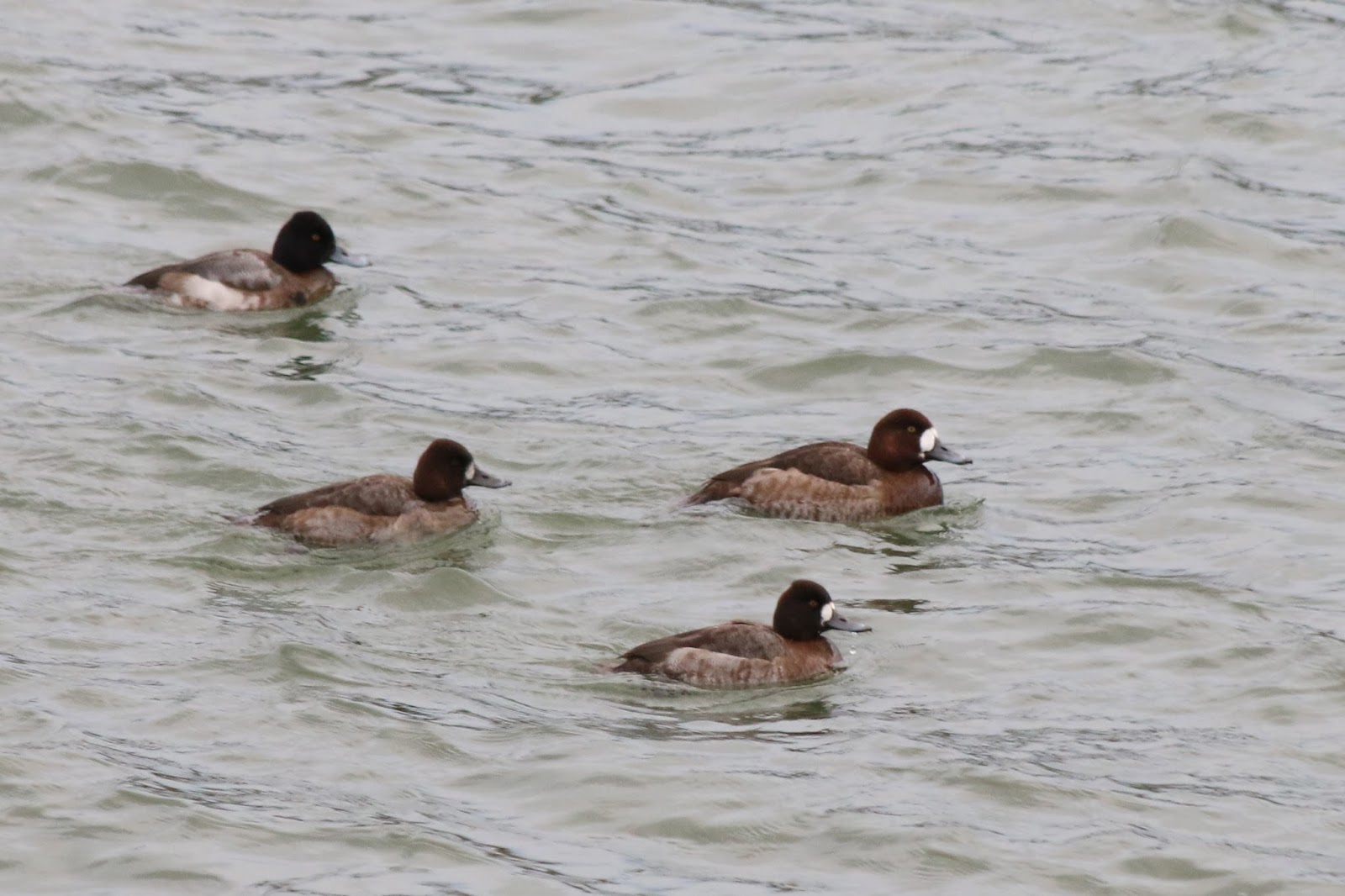 But.  The two left birds don't have THAT much of a peak.  Is it enough?  Am I overthinking?  Below there is a small pack of scaup.  The center two dudes look like a nice comparison of Greater and Lesser. 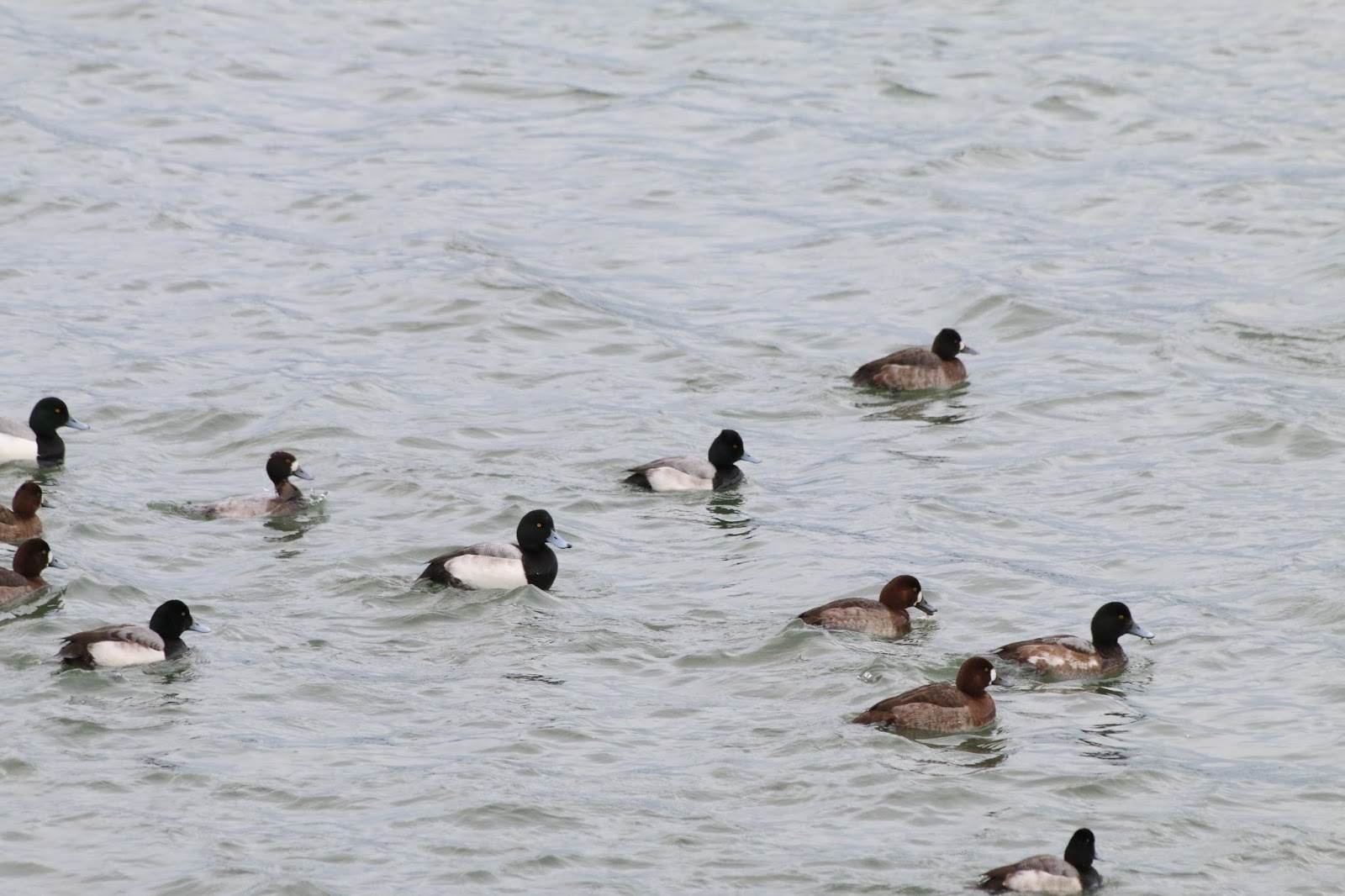 I would say there are at least seven Greaters in the above photo, and at least two Lessers.  Here is another small pack: 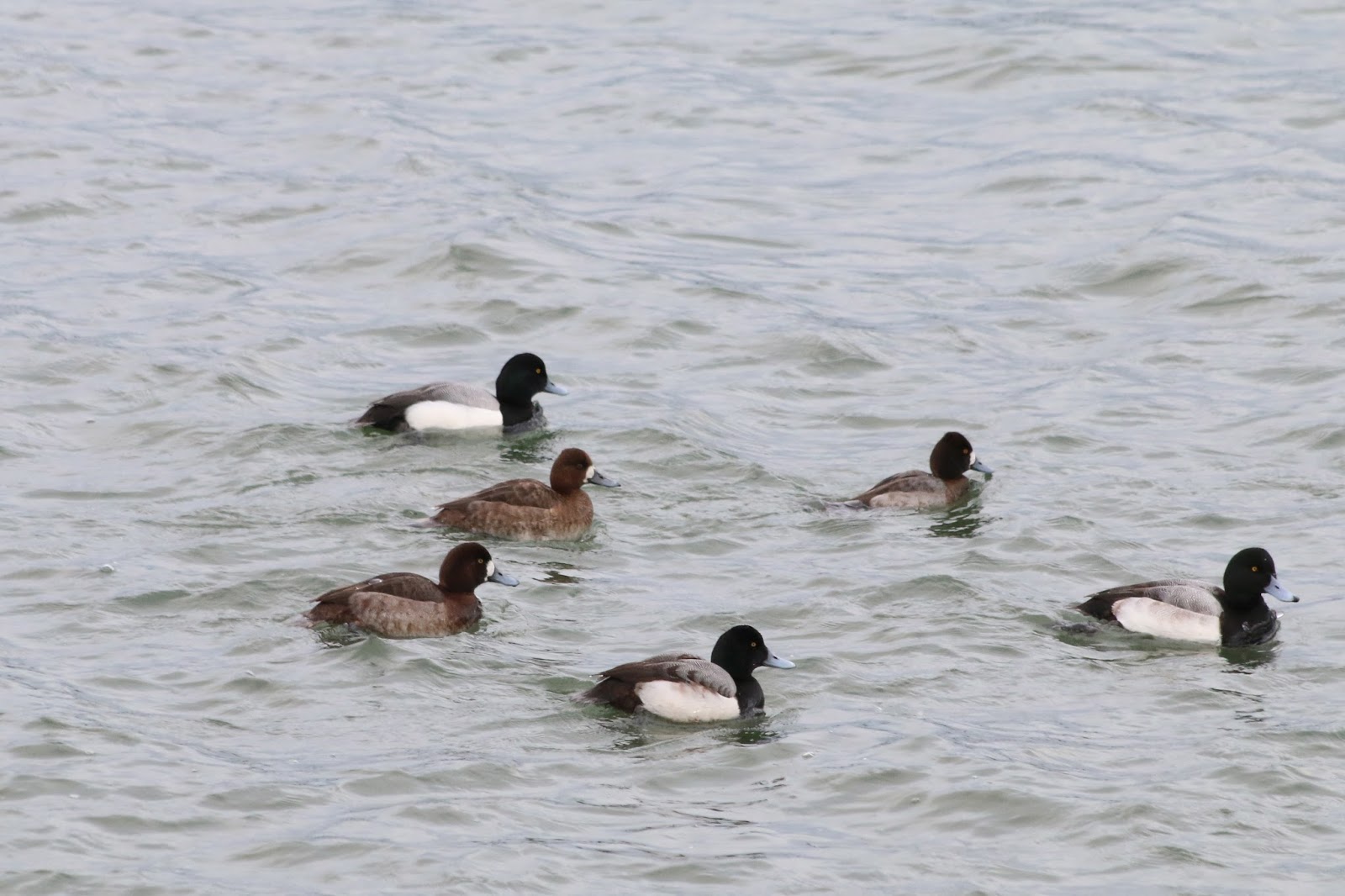 Now I'm feeling uncertain.  Left column middle looks Lesser, along with the female to her right.  The rest Greaters?  I'm not confident.  Ok one last photo, where the black nail on the bill should help, rather than head peak: 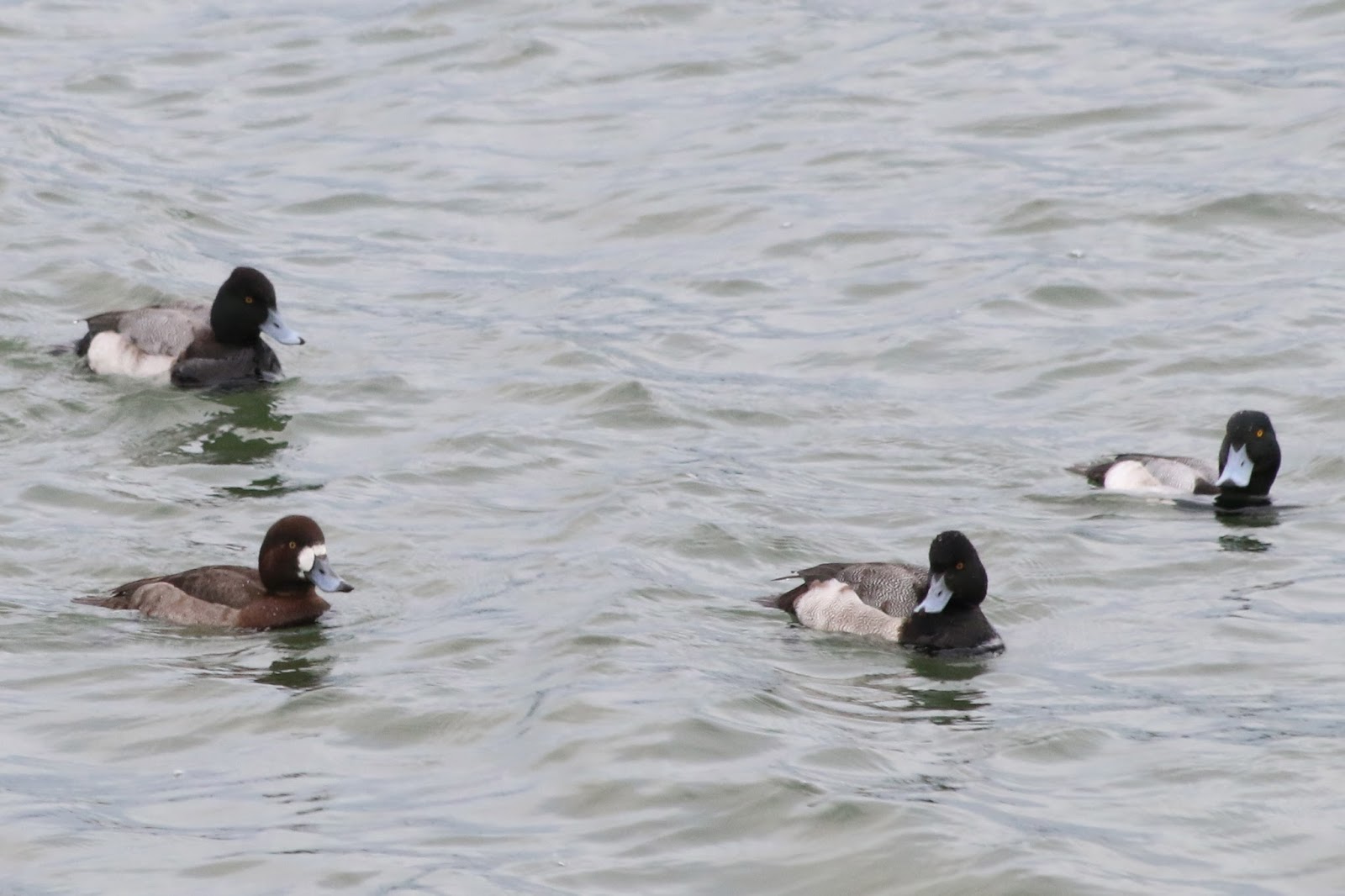 The top left bird looks big, but with that head peak and small nail I would say Lesser.  Bottom left looks small, but rounded head and big nail, so Greater.  Top right bird, big nail could be Greater.  And bottom right bird, small nail, but otherwise unsure and would guess Lesser.

Oh.  Wait.  I have one more bird, from Crystal Springs Rhododendron Garden last week.  I called it a Lesser despite not having much of a head peak.  Lots of heavy barring on the back and a small-ish nail though. 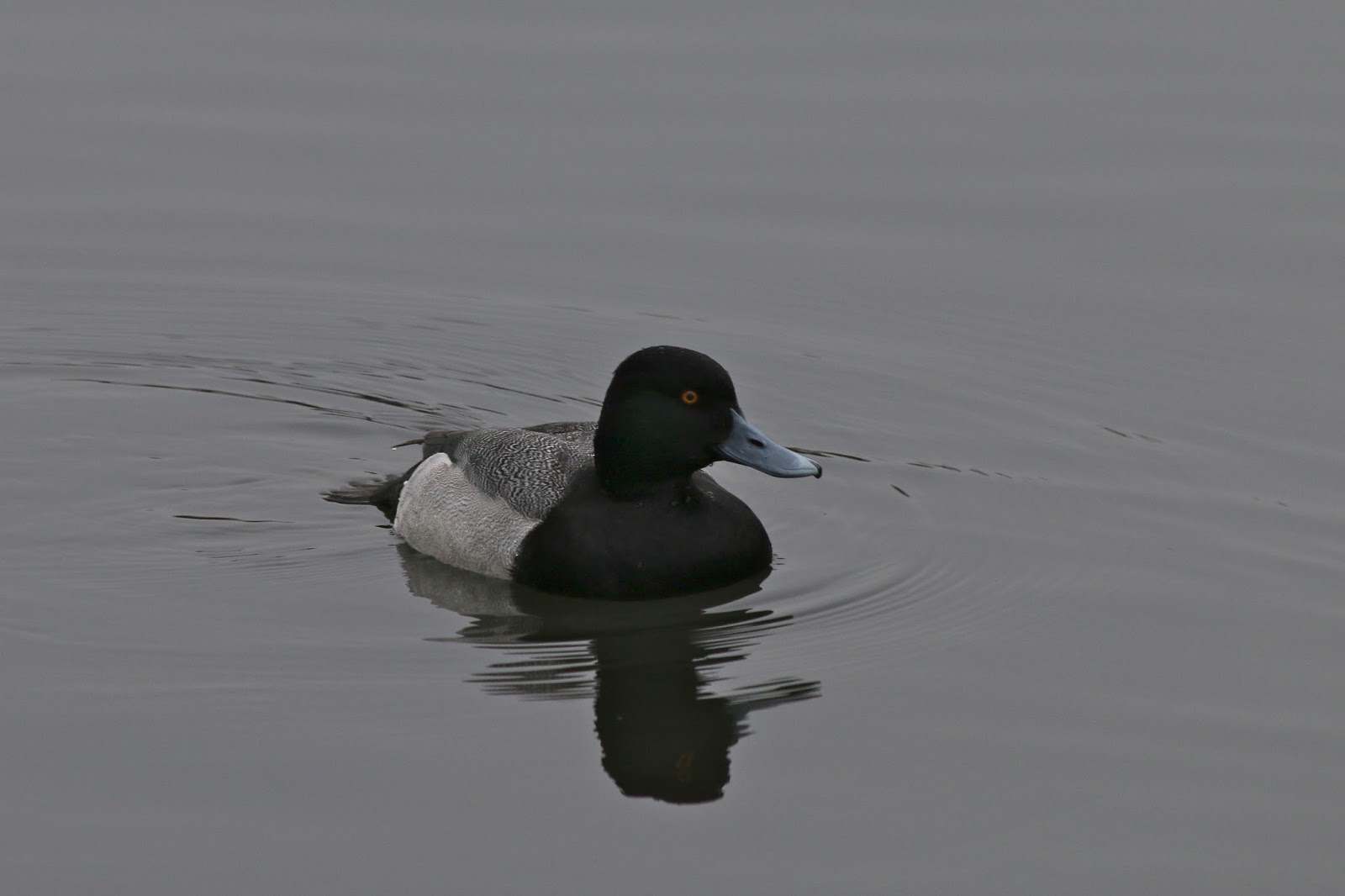 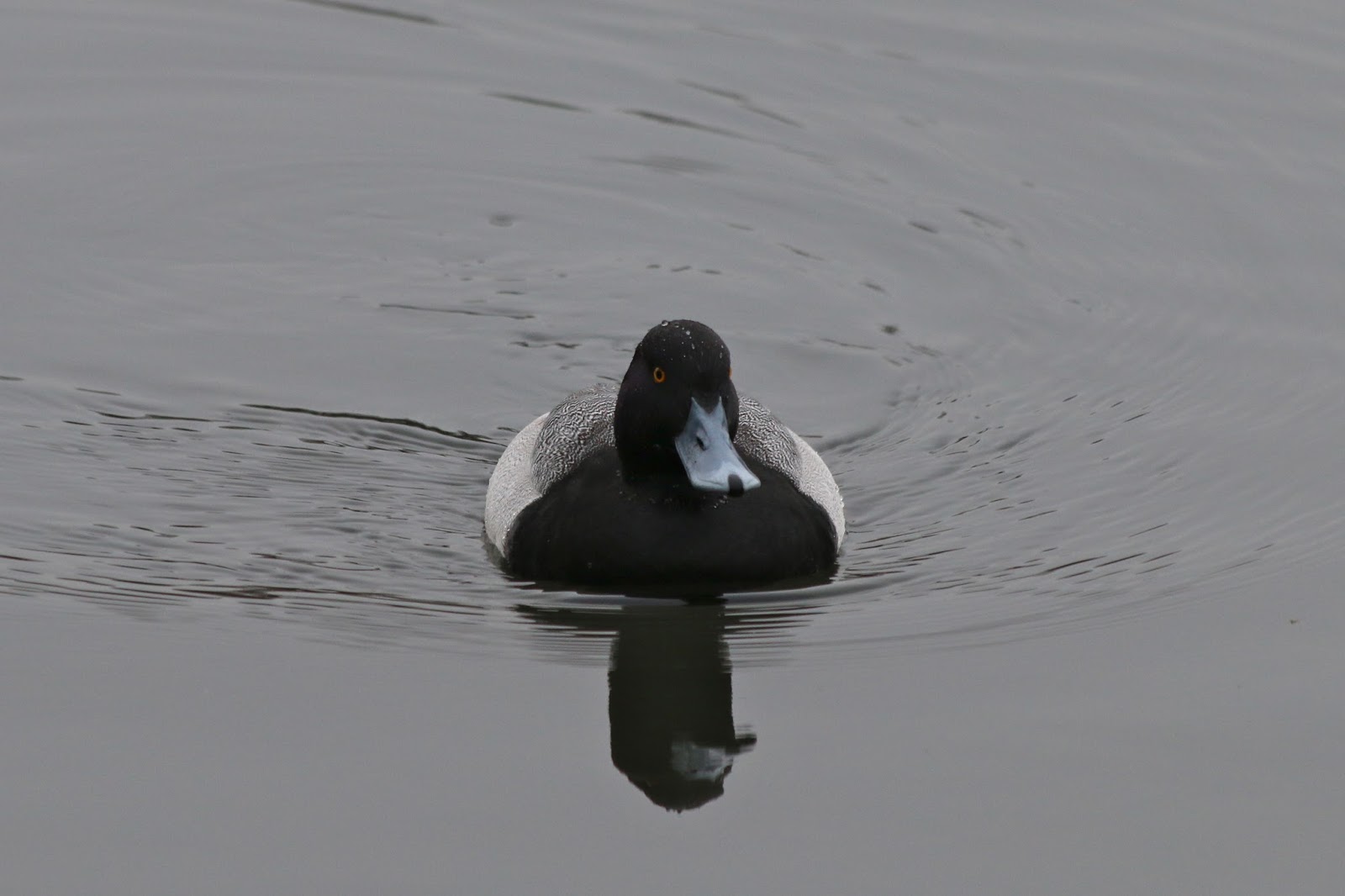 For a bird I see nearly every day it's kind of ridiculous that I only have TWO blog posts with the label "Lesser Scaup."  If you want more, my coworker John recently photographed a bunch of Greaters at Broughton Beach, and also a beaver!  Wild.

Here's some other random junk from recent times. 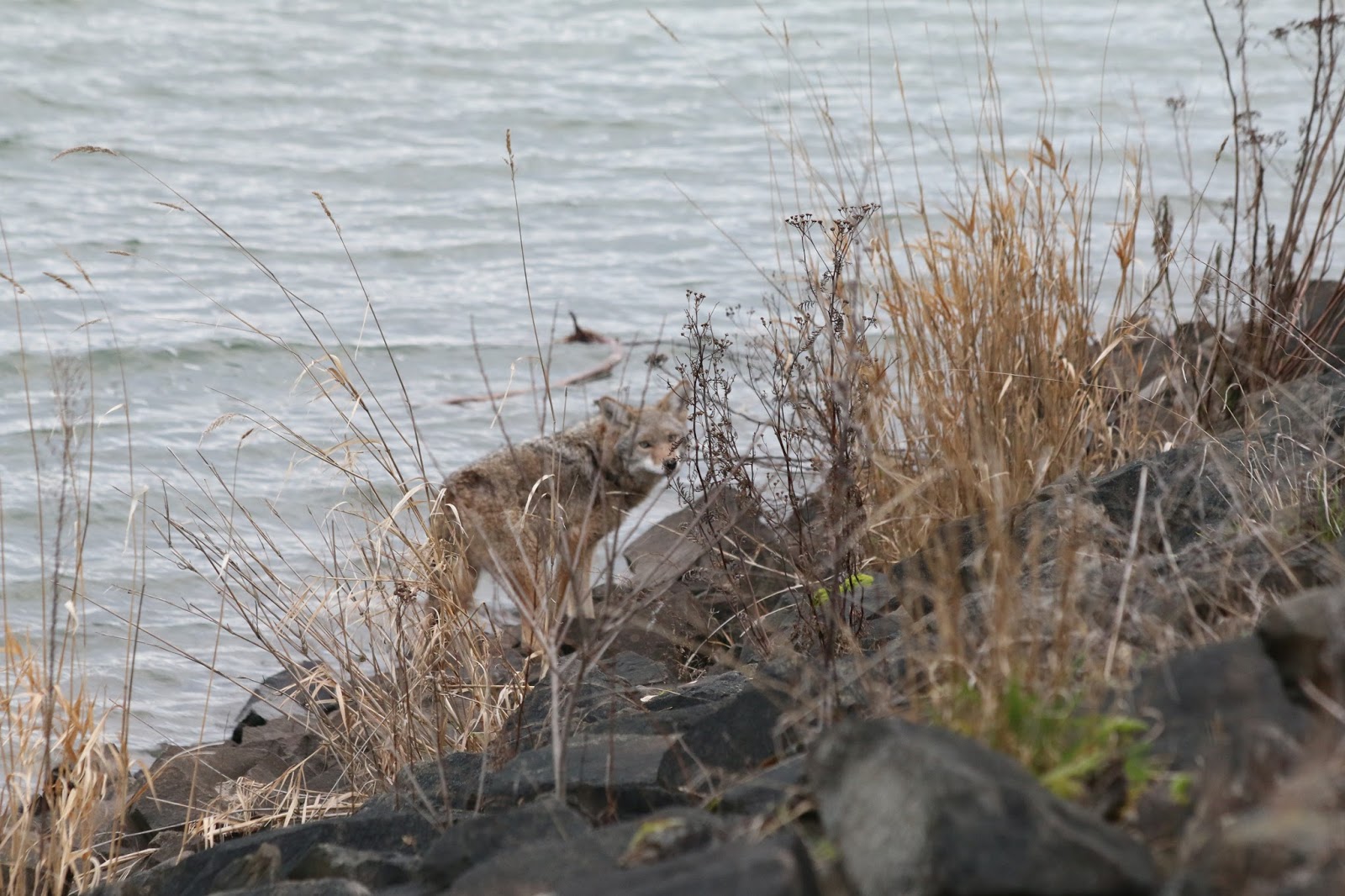 My first bike path coyote, though I've been poking their path poop for years.  Terrible shot. 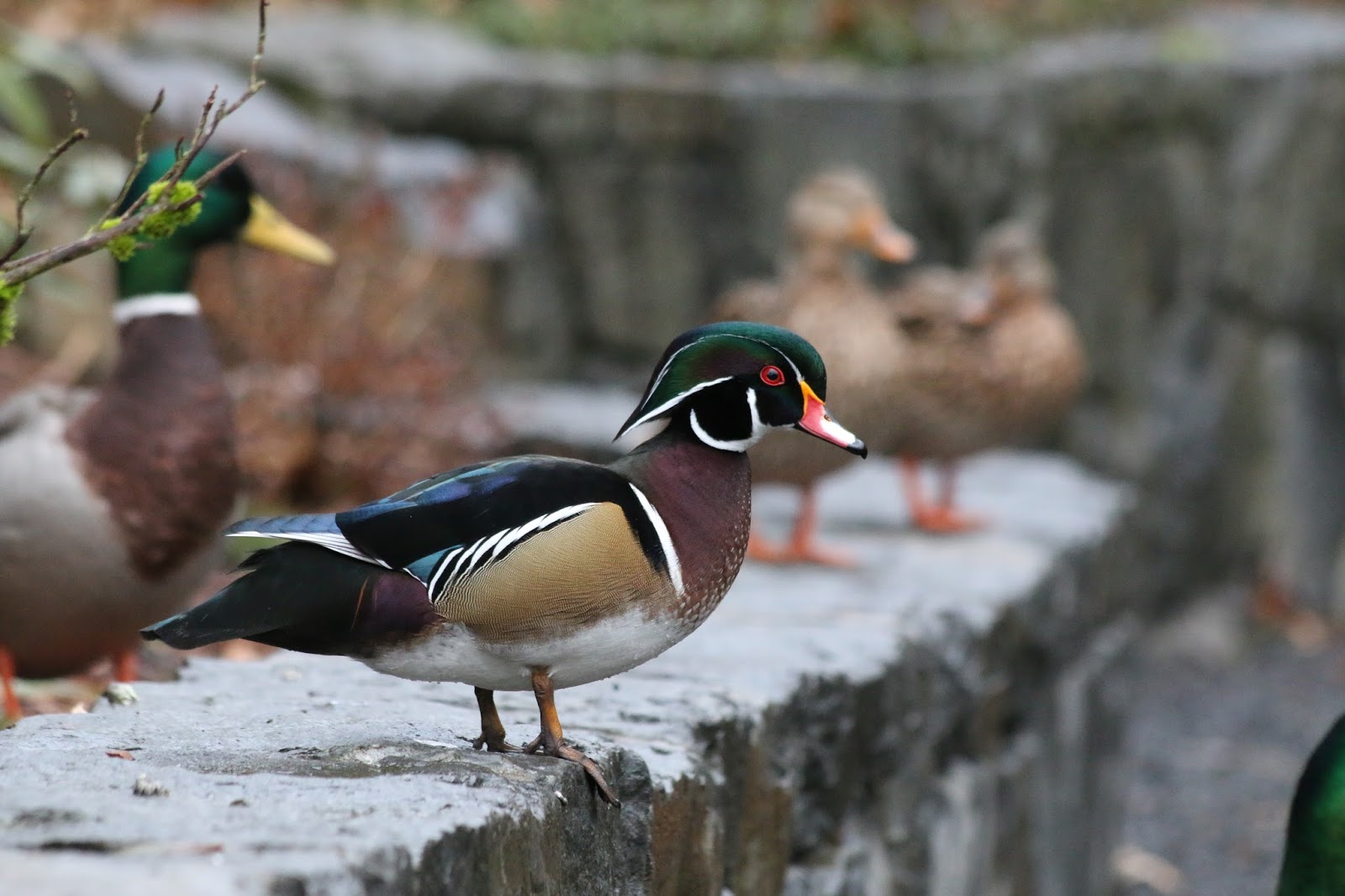 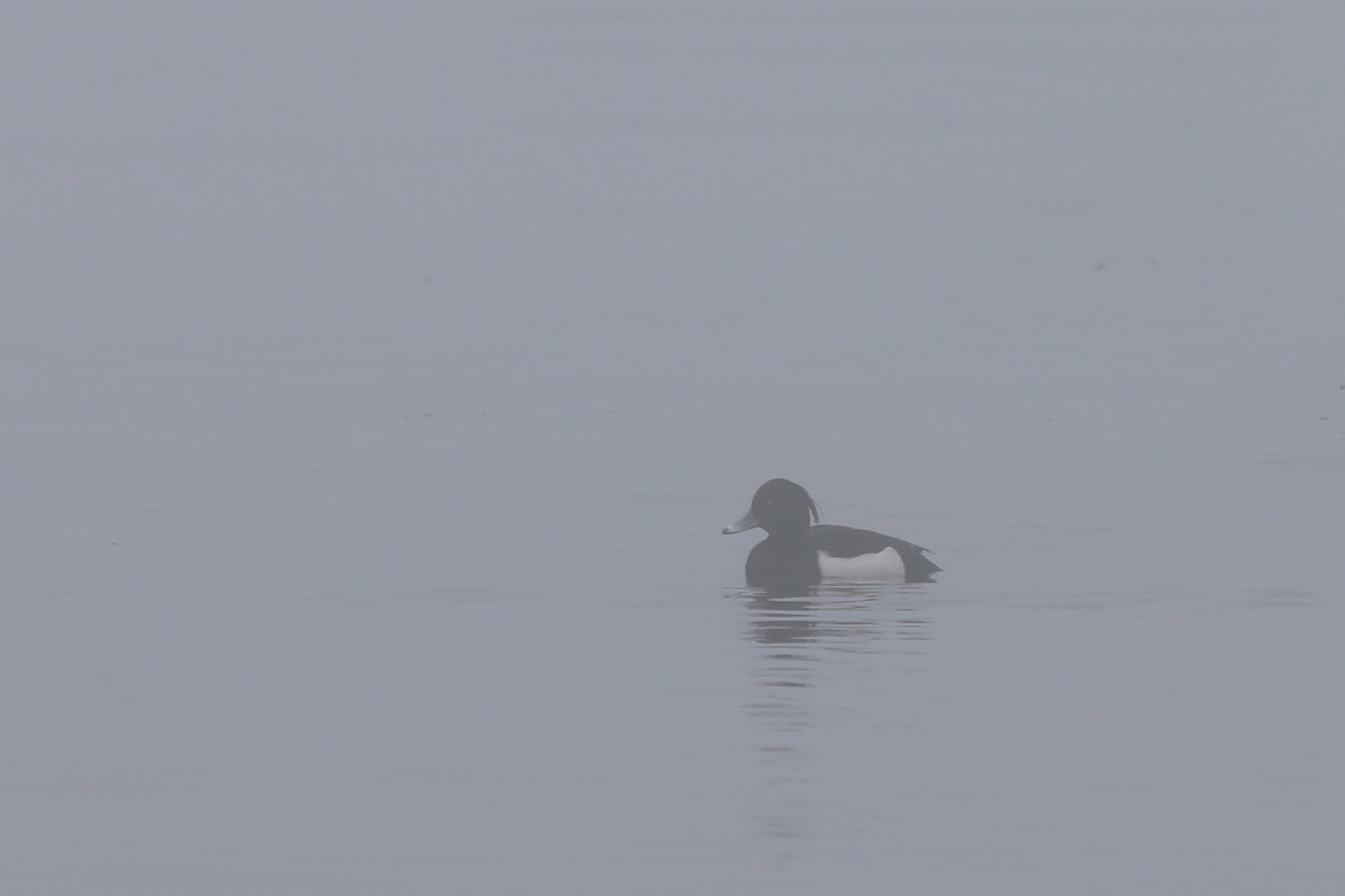 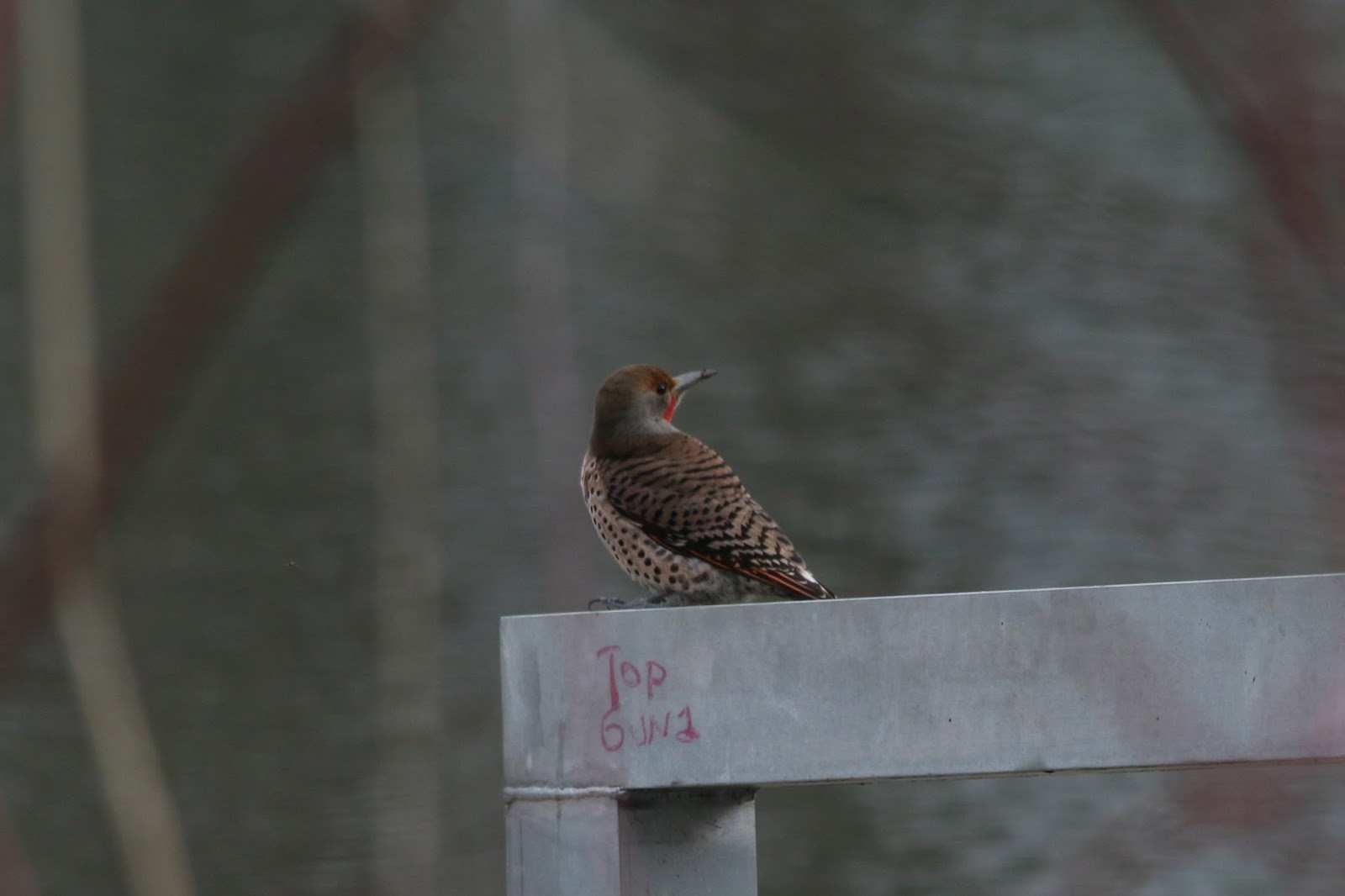 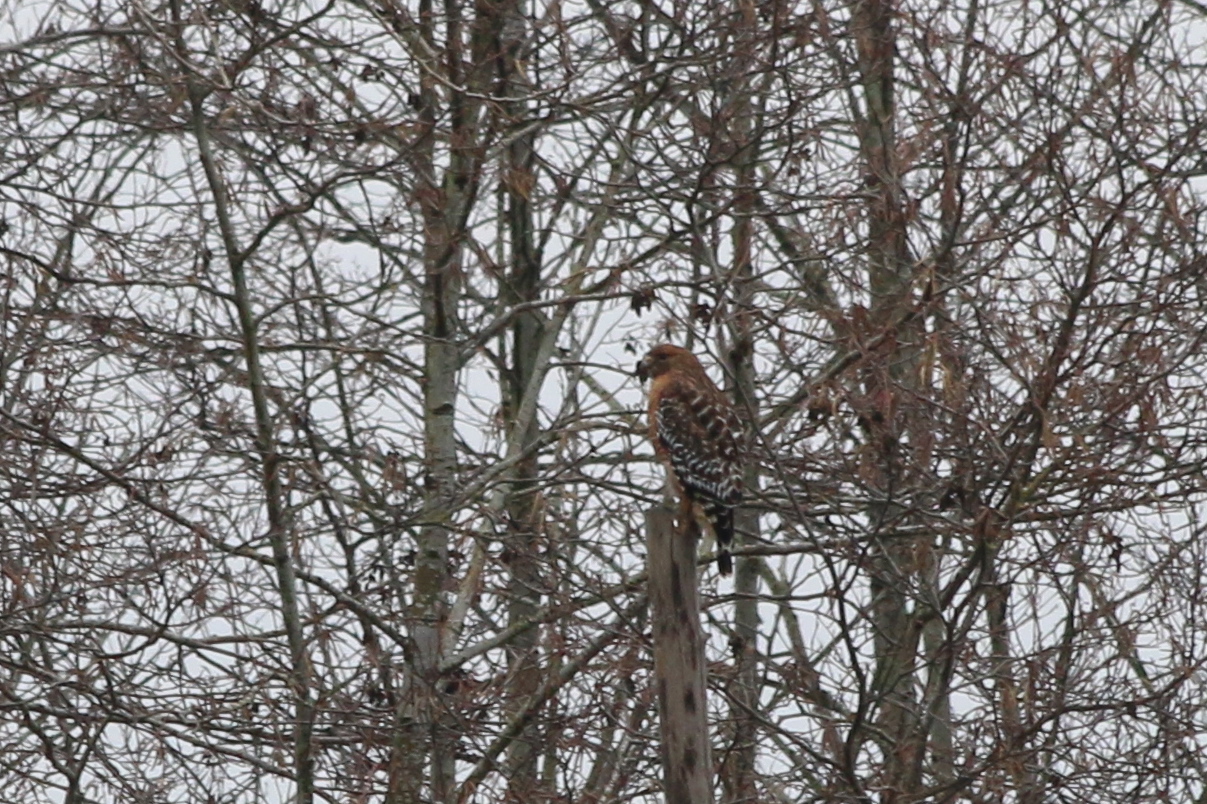 Red-shouldered Hawk, continuing at Whitaker Ponds (that's a leaf behind him, not a dead thing in his mouth) 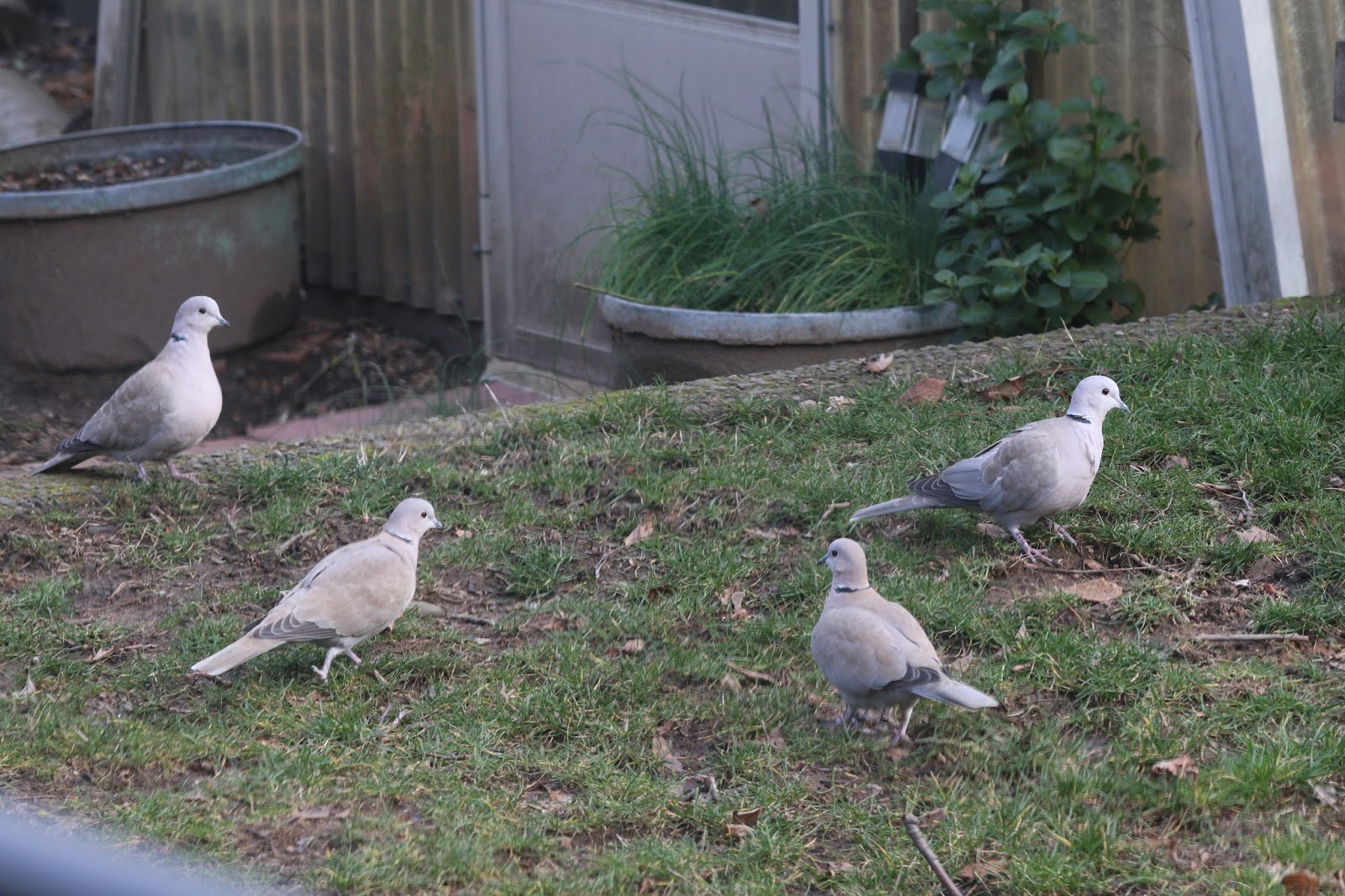 All-time high of four Eurasian Collared-Doves in the yard