One time when we were kids, my brother got himself wedged in a tree in our front yard in a most uncomfortable manner.  There were tears.  My dad, of course, ran inside to get the camera before helping him get unstuck. 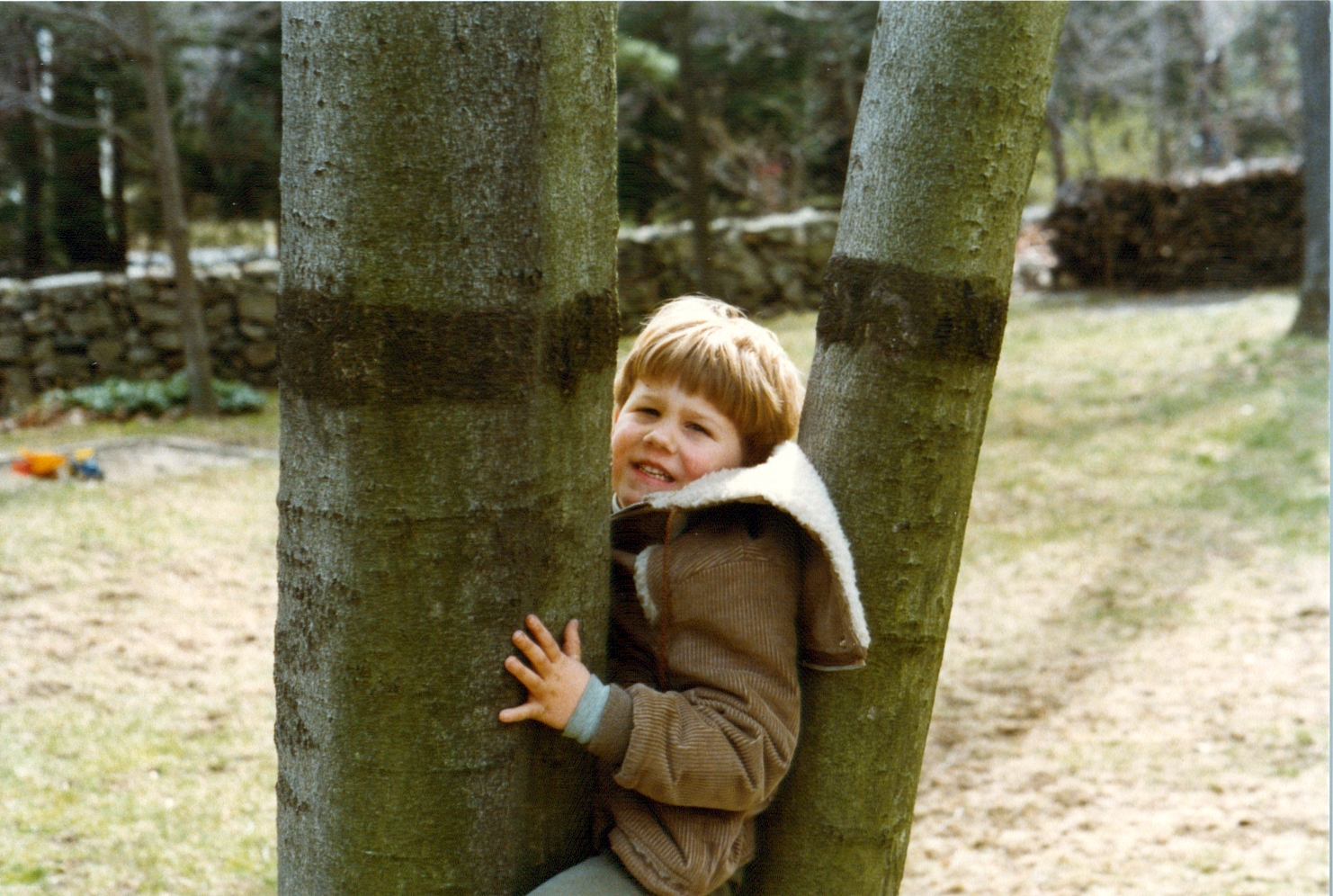 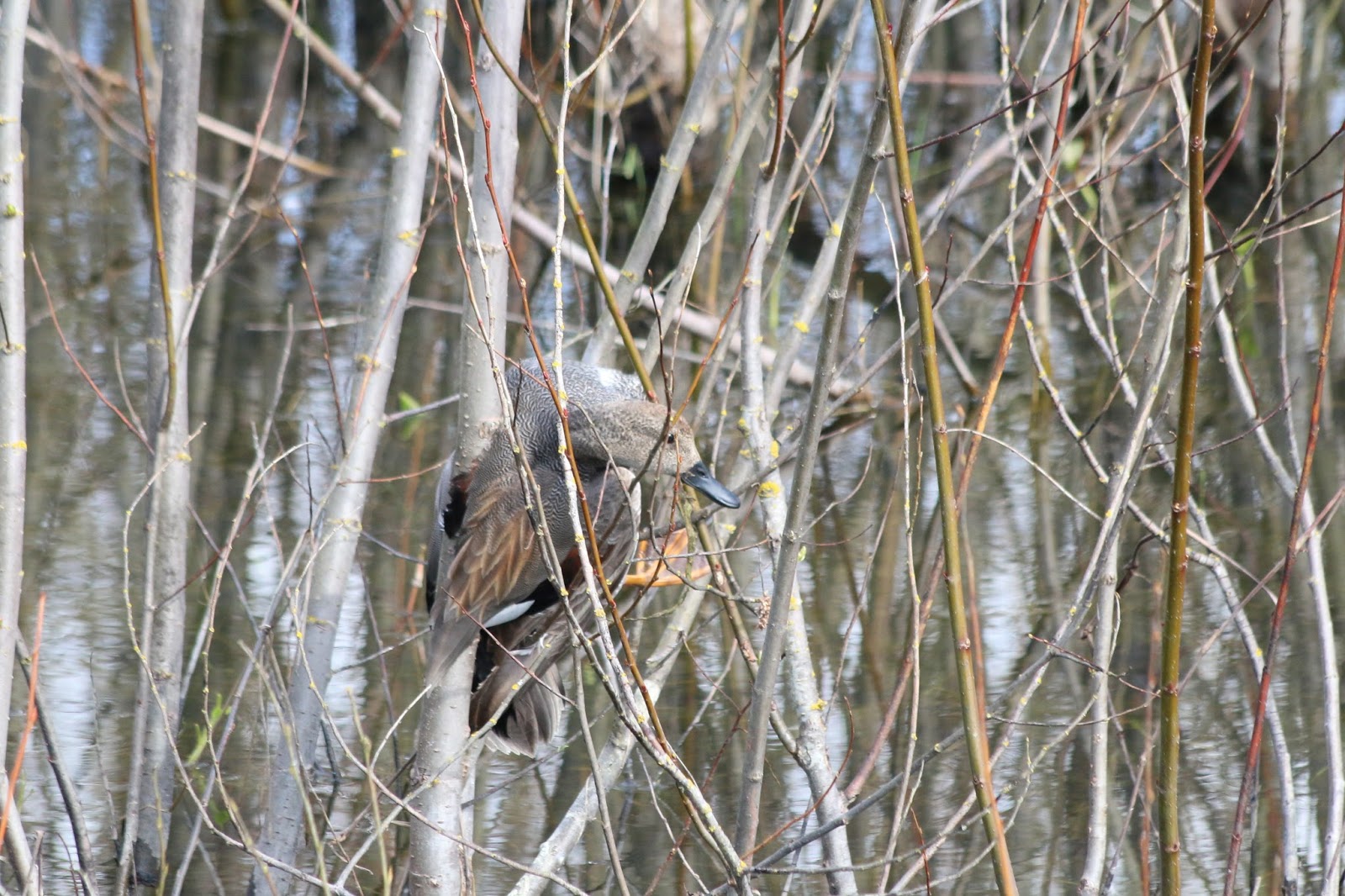 How this happened I can only guess.  I took that lesson from my dad and shot off some photos before figuring out how to help this struggling duck.  The problem was that the tree was in water and I had no idea how deep it was.  I put my assistant Jake back in the car along with my camera and wallet, and returned to the scene ready to get wet. This is what the area looks like: 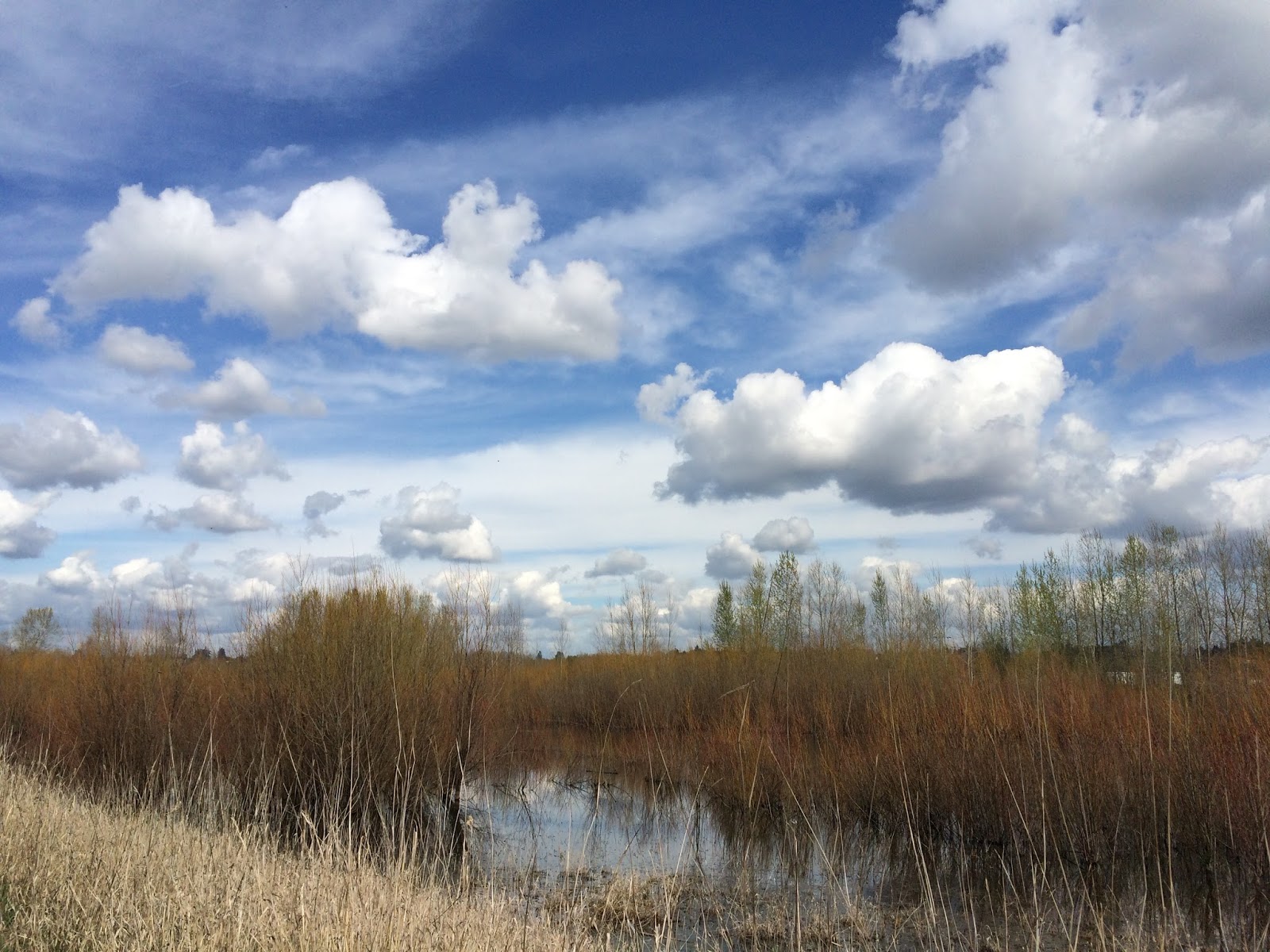 I was standing at the very edge, about to put my foot in the water when the duck finally gained the motivation to try harder.  He wriggled and flapped and boom, shot the heck out of there and into the sky.  My cellphone was on the ground so I quickly tried to get a shot of it flying away.  It's in the dead center of the next photo, just above the distant tree line. 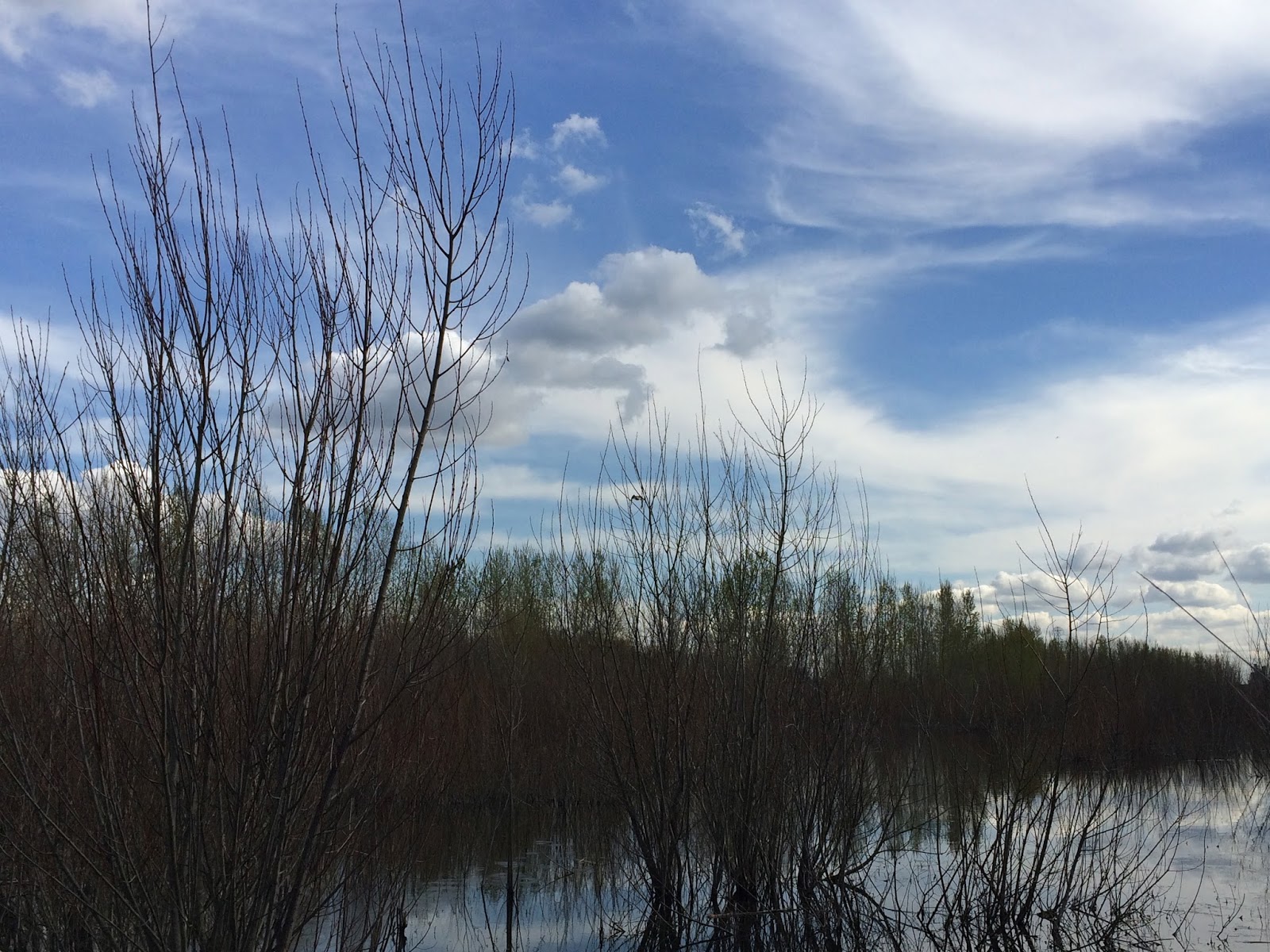 If only it had been that easy to get my brother out of that tree.

Along the same trail at Shillapoo I watched a Great Blue Heron eat a snake.  It took over ten minutes of wrestling and was hard to watch at some points.  I wish photos were better, but here are a couple anyway: 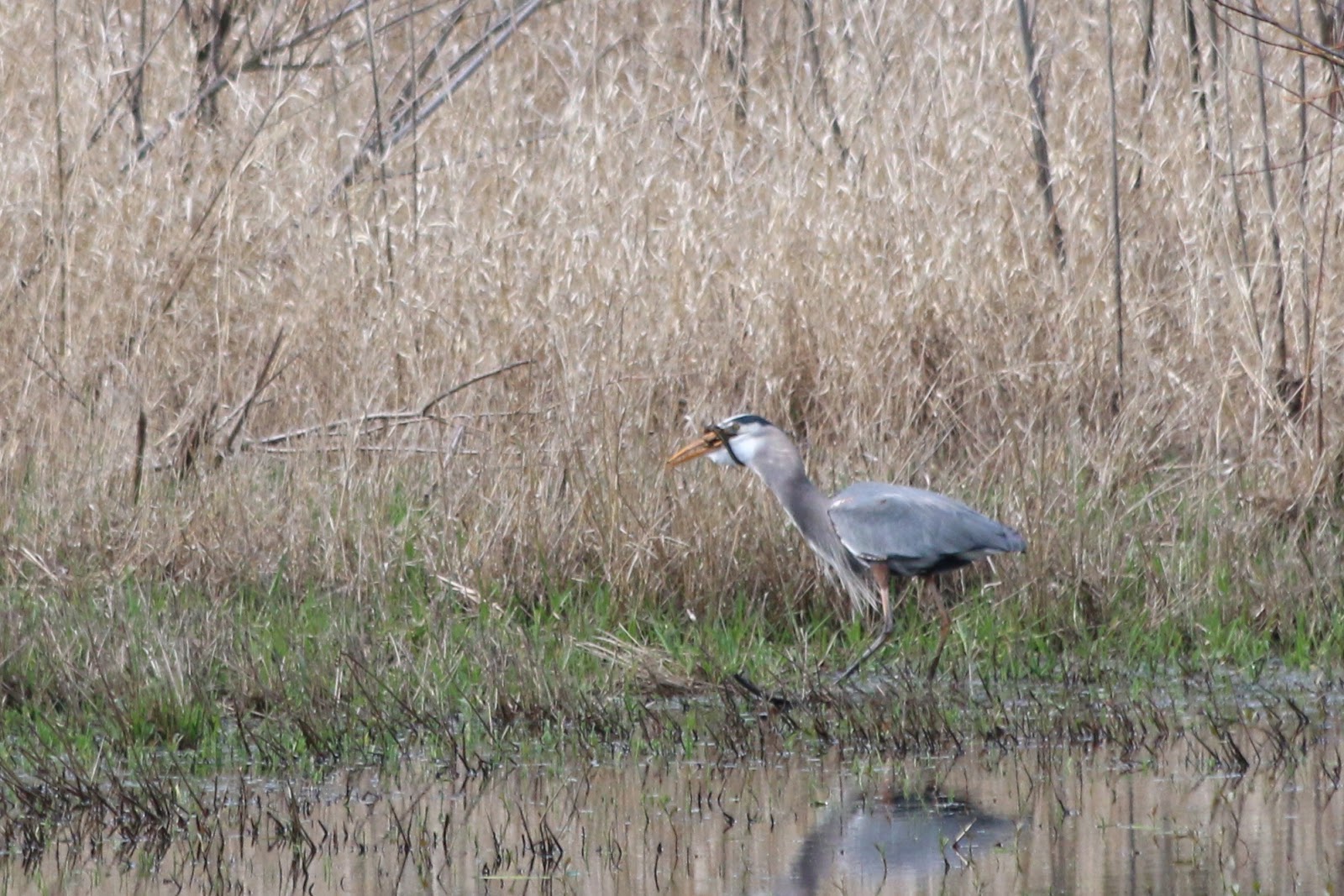 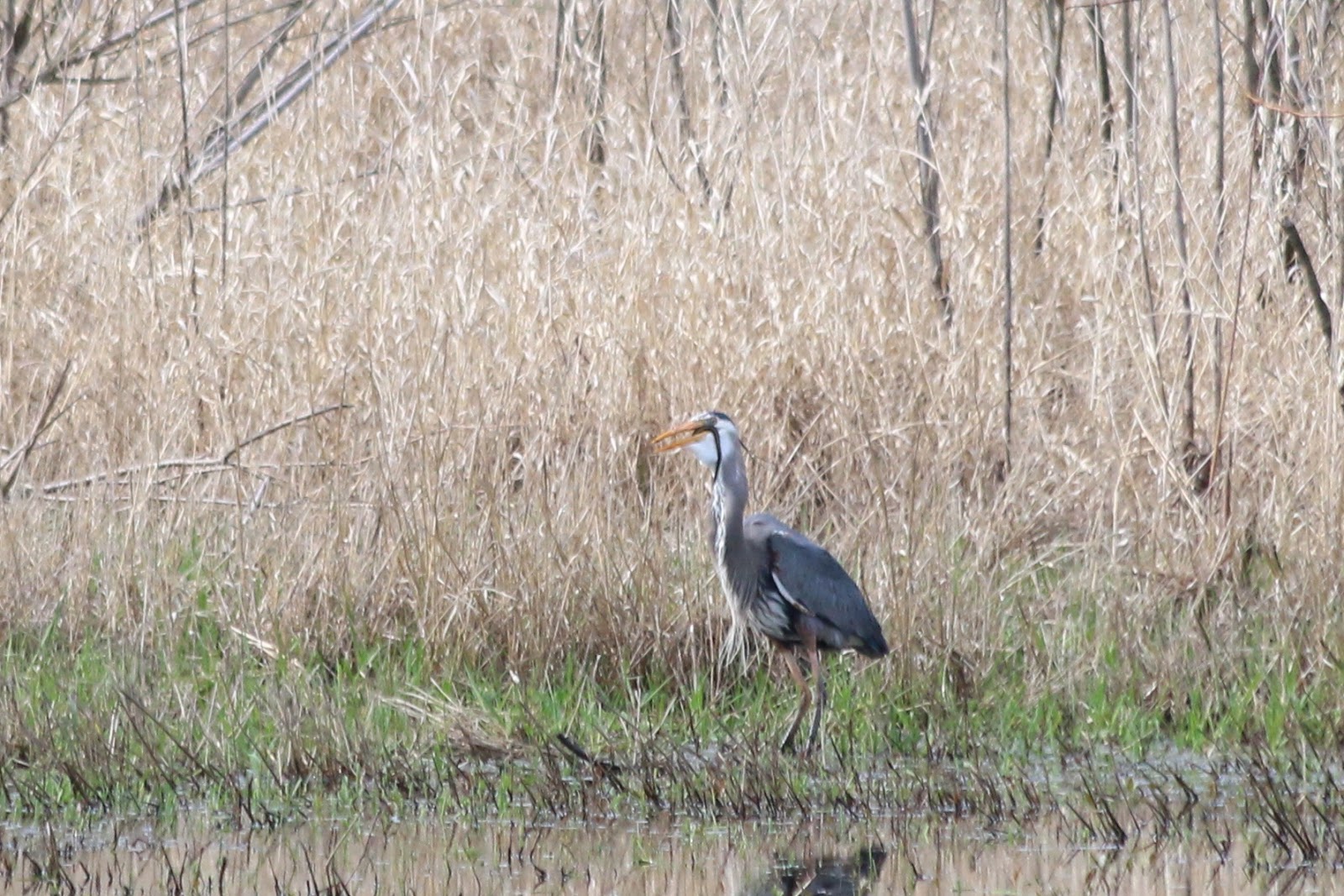 When the snake was finally contained to the insides of the heron, I could see the neck bulging in snake-filled spots.  I can't imagine having a live snake wriggling around my throat.

Along the trail there's a decent sparrow spot and I finally got my year Fox Sparrow. 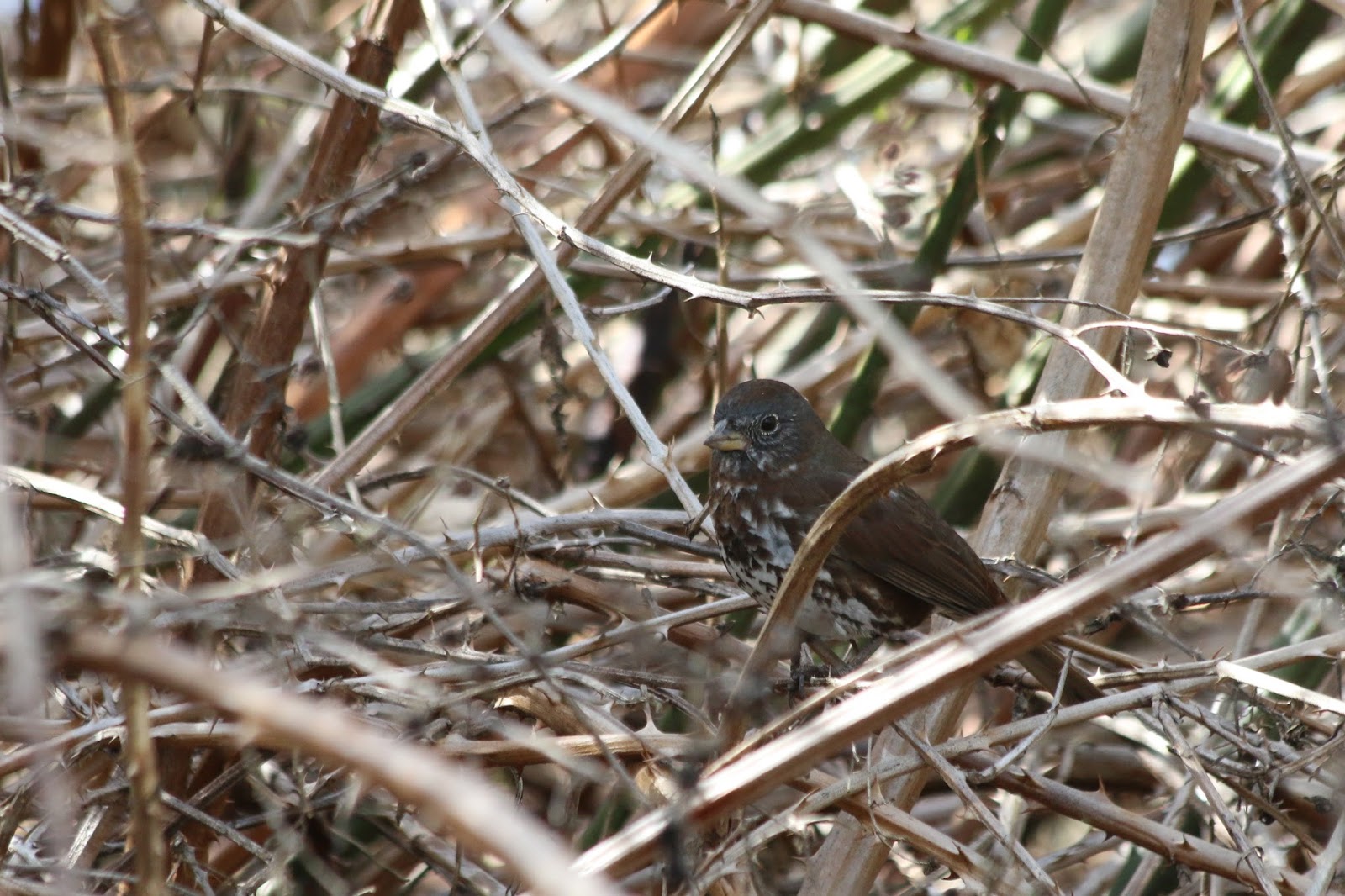 Stoked on the Fox Sparrow 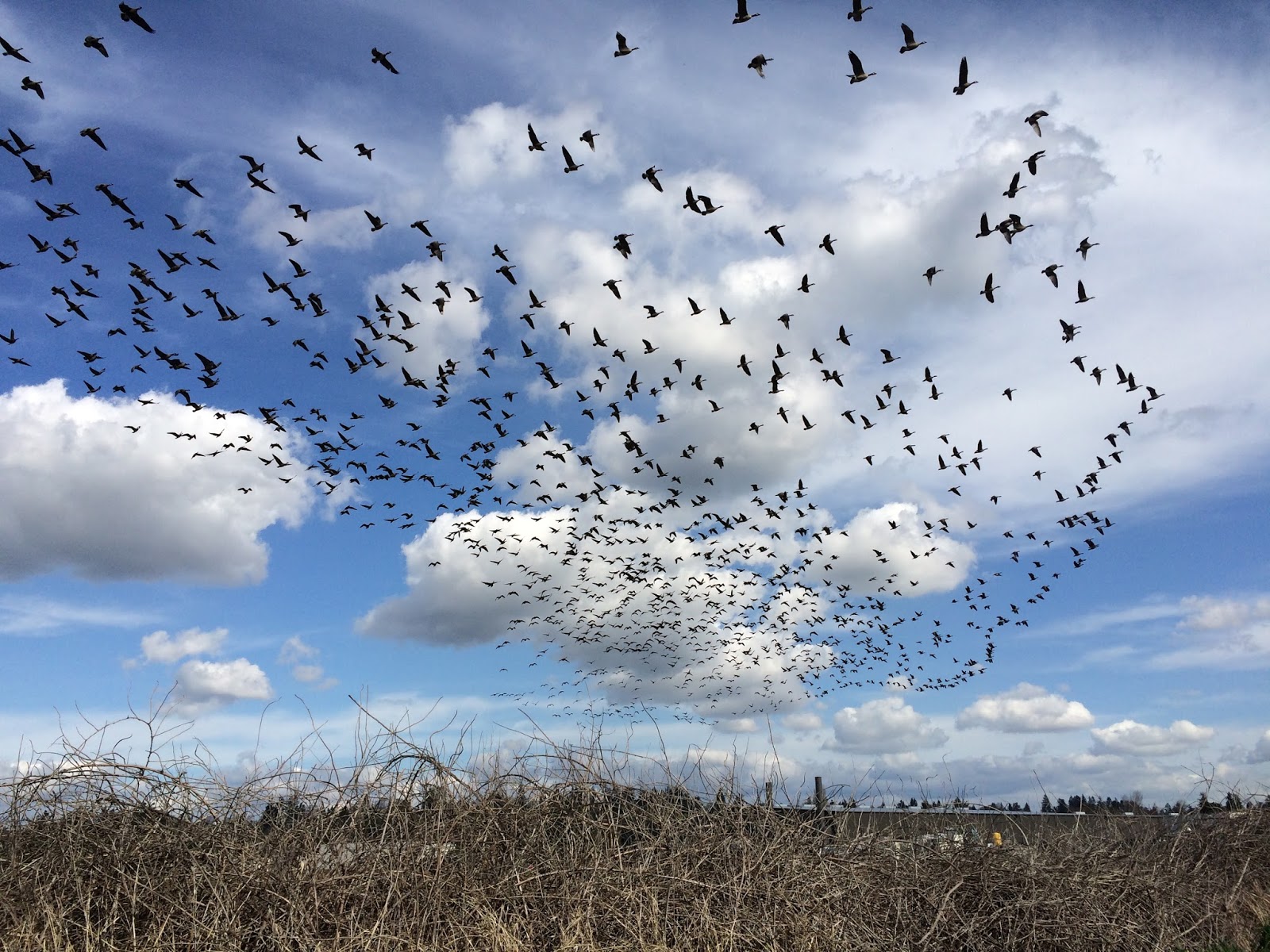 My reason for taking Jake for a walk here was to lessen the guilt I felt for taking Ralph for a hike up Larch Mountain in the morning.  I wasn't sure Jake would be up for the hike and would at best slow us down.  I could have left both at home, but Larch Mountain can feel spooky scary and I knew Ralph would make it less so. 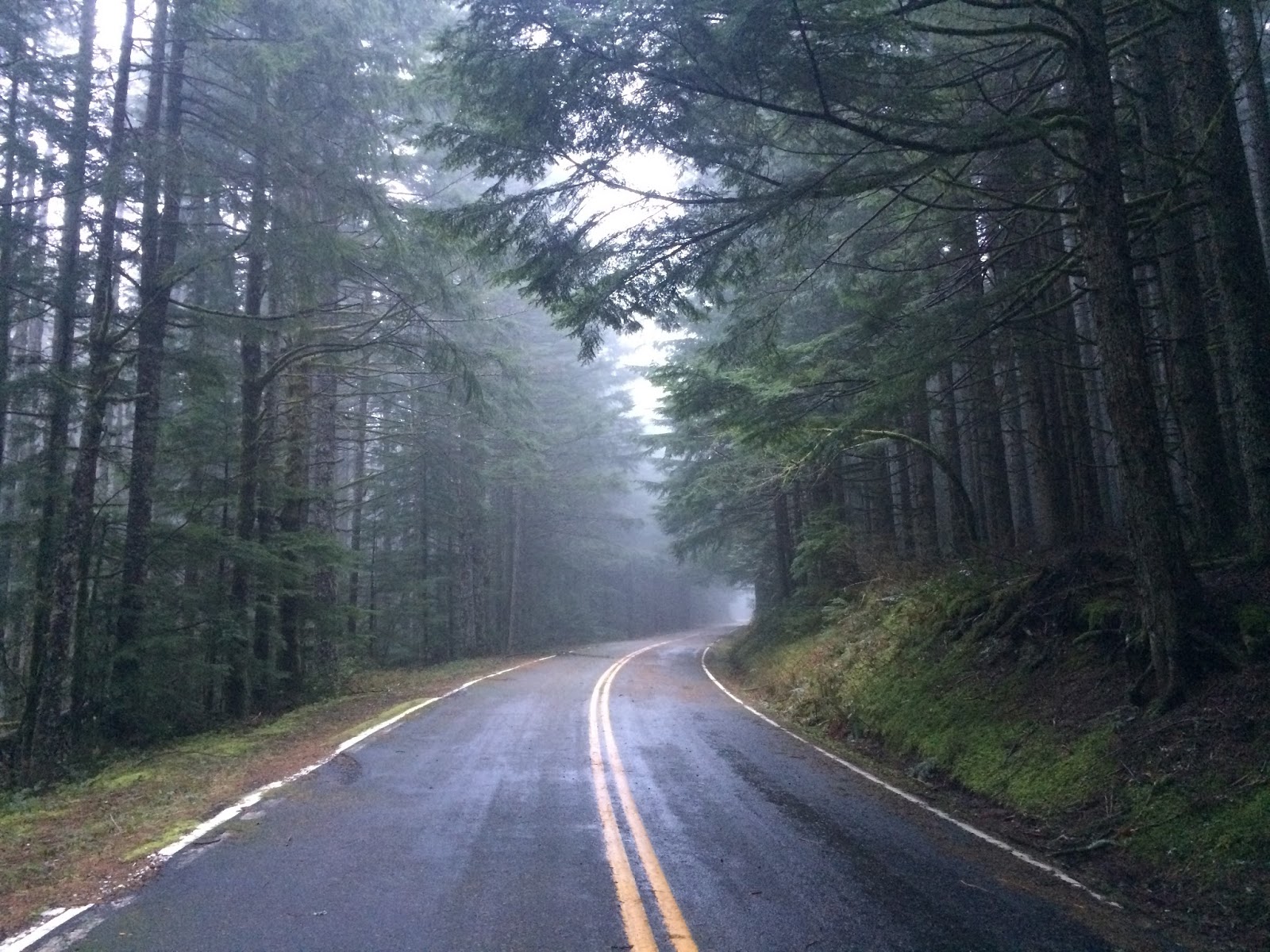 The road past milepost 10 is gated in the winter, so the last four or so miles you must walk up if you want to hear a grouse.  Around MP 12 we came upon a couple of ravens.  One was picking clean some rib bones, and the other just flying.  That latter raven decided to hike with us for the next mile which was totally awesome. 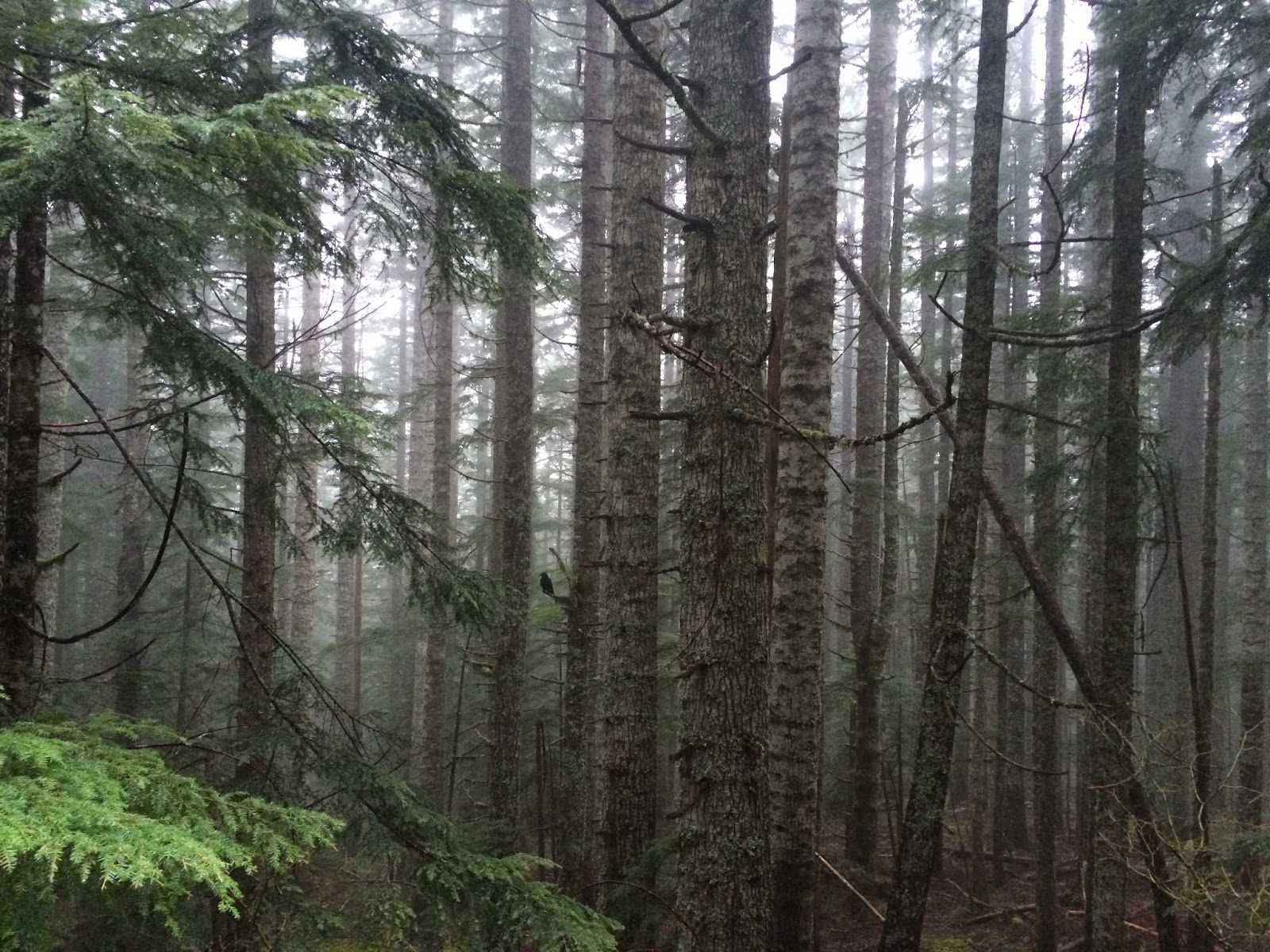 A couple times it sat and made these sounds when we caught up:

Once when I was going slow, trying to find the source of a sound, the raven started calling loudly, seeming impatient with our pace.  The raven finally lost interest in us around MP 13.  It was another 3/4 of a mile to where I finally heard the sound I had been waiting for:  a booming Sooty Grouse!  This is a bird I kept missing in the county so I was stoked to finally hear one.

The fog and mist gave way to actual rain around this time, so we turned around and walked back down. 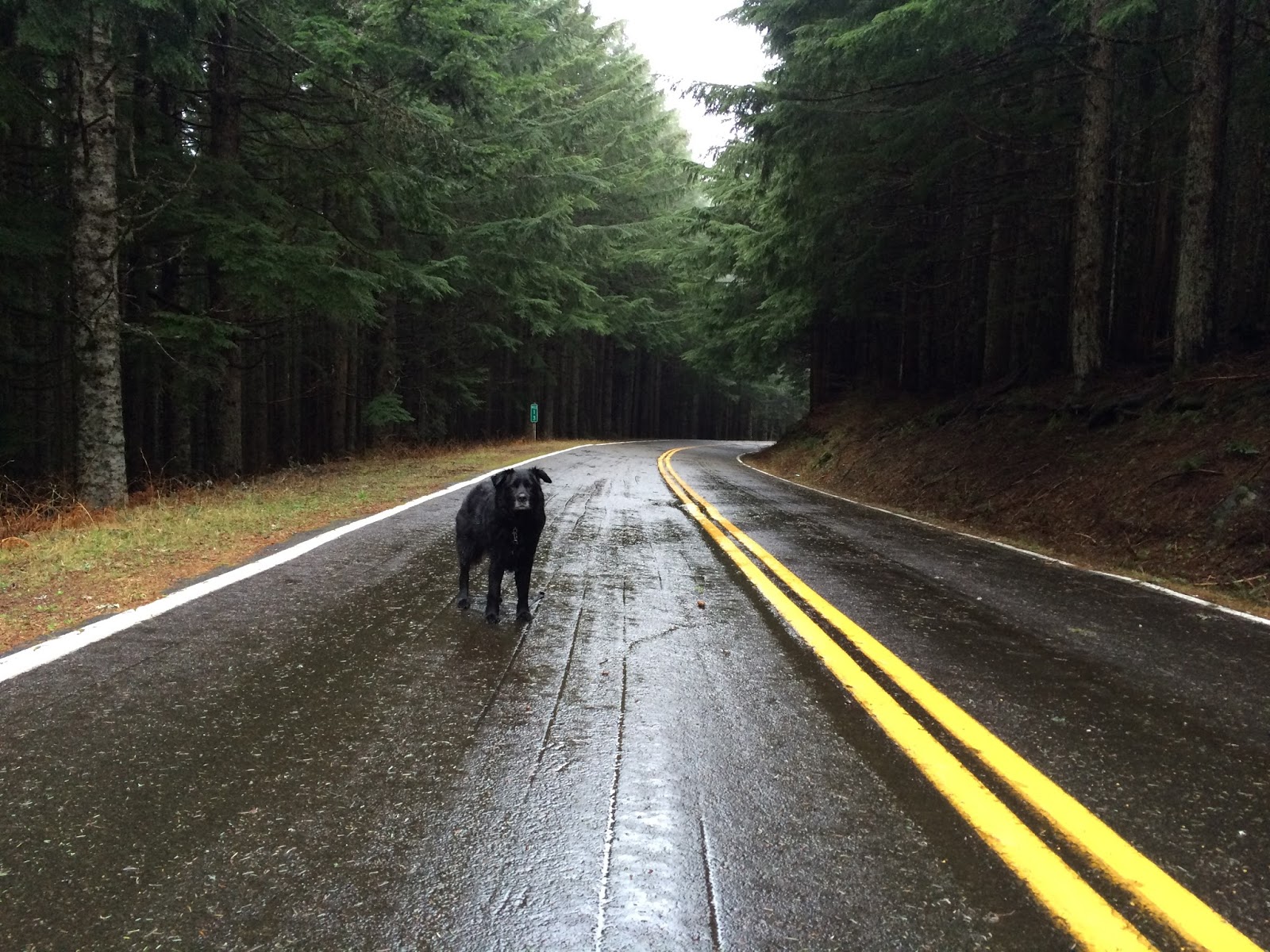 Despite appearances, Ralph stays on leash at all times.  He does "stay" very well for photos though.

In other news, my motorless list is getting back up to snuff even though I totally slacked for a month or two.  Last week I was doing yard work when I caught sight of bird #80,  a pair of Common Ravens soaring overhead.  I ran to grab my camera and returned in time to snap a few photos and hear one croaking. 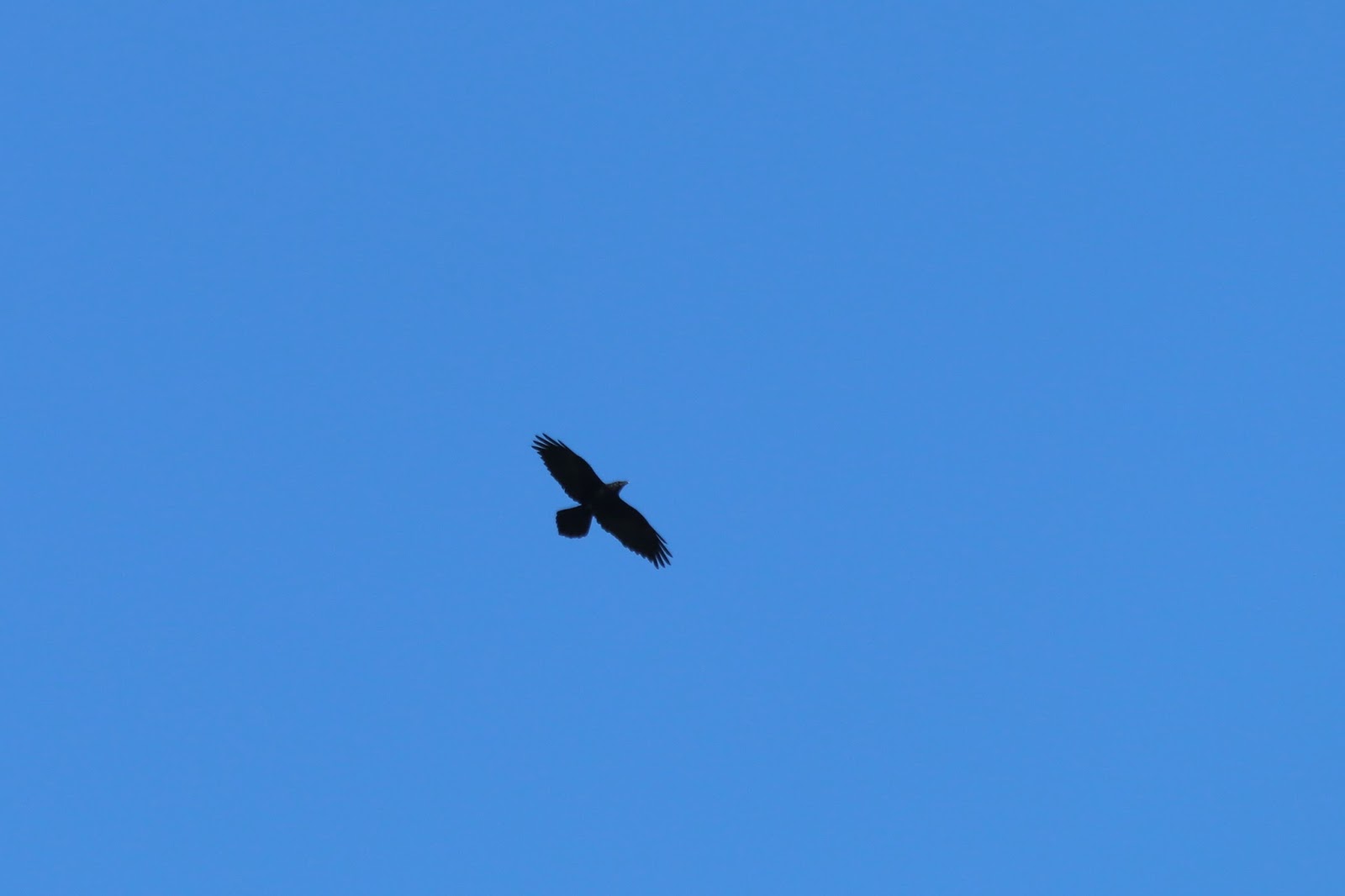 This was fantastic not only because it was a new yard bird (#59), but also because this could be a tough motorless bird.

I spent Monday forcing myself to do yard work, moving the ridiculous amount of dirt I had delivered from the front yard to the back.  The morning fog had cleared up and I was checking the sky regularly hoping for a Turkey Vulture finally.  Instead a pair of Bald Eagles came soaring from the north.

I know, Bald Eagles are old news.  I know, I have more posts with Bald Eagles than any other bird.  I know.  But still. 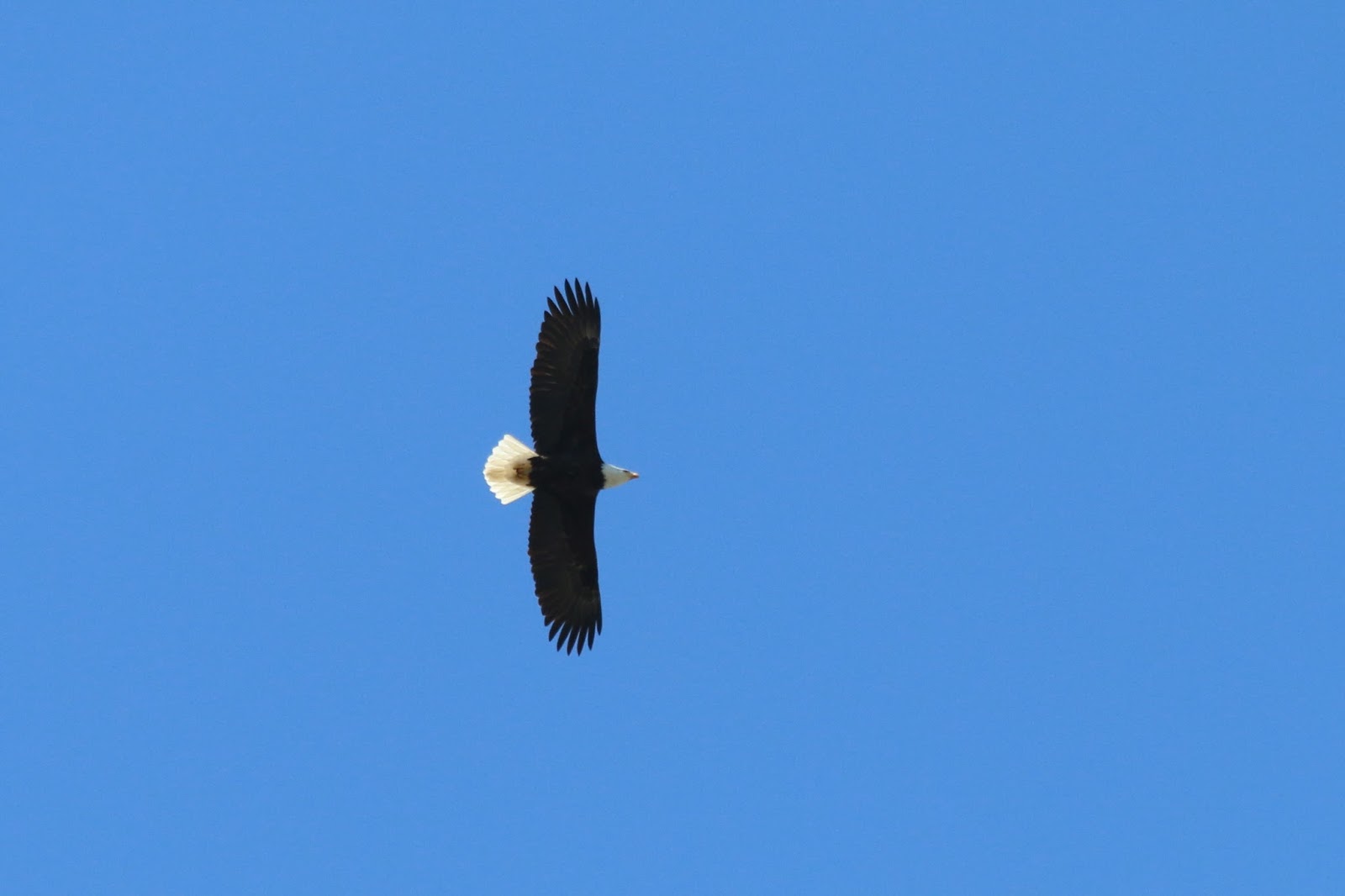 This adult and a sub-adult were cruising around when a third (adult) joined in.  I was stoked.  Bald Eagles make me so freakin happy, especially when they're hanging out together right over my yard.  The adults began what appeared to be some mild courting. 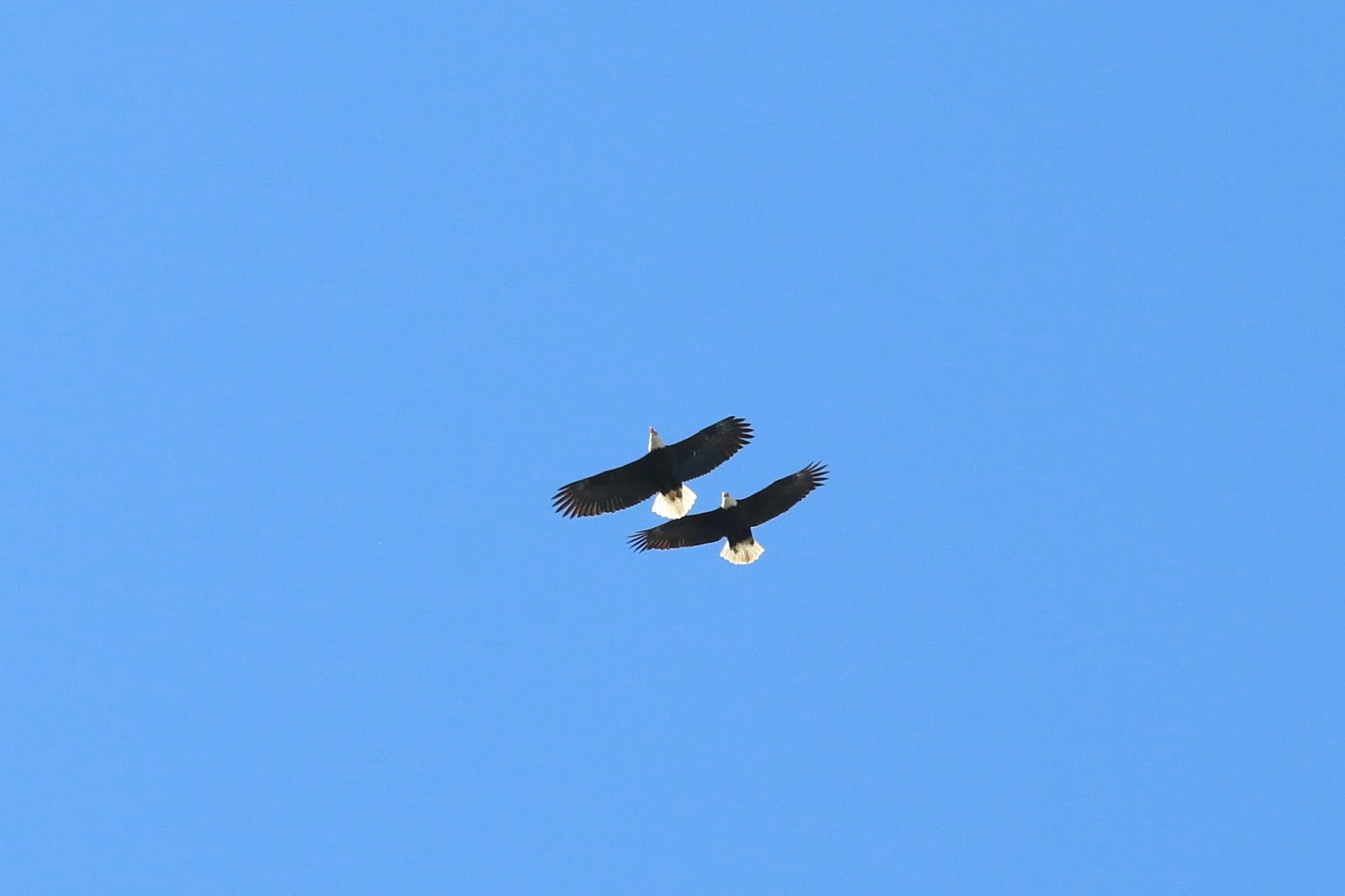 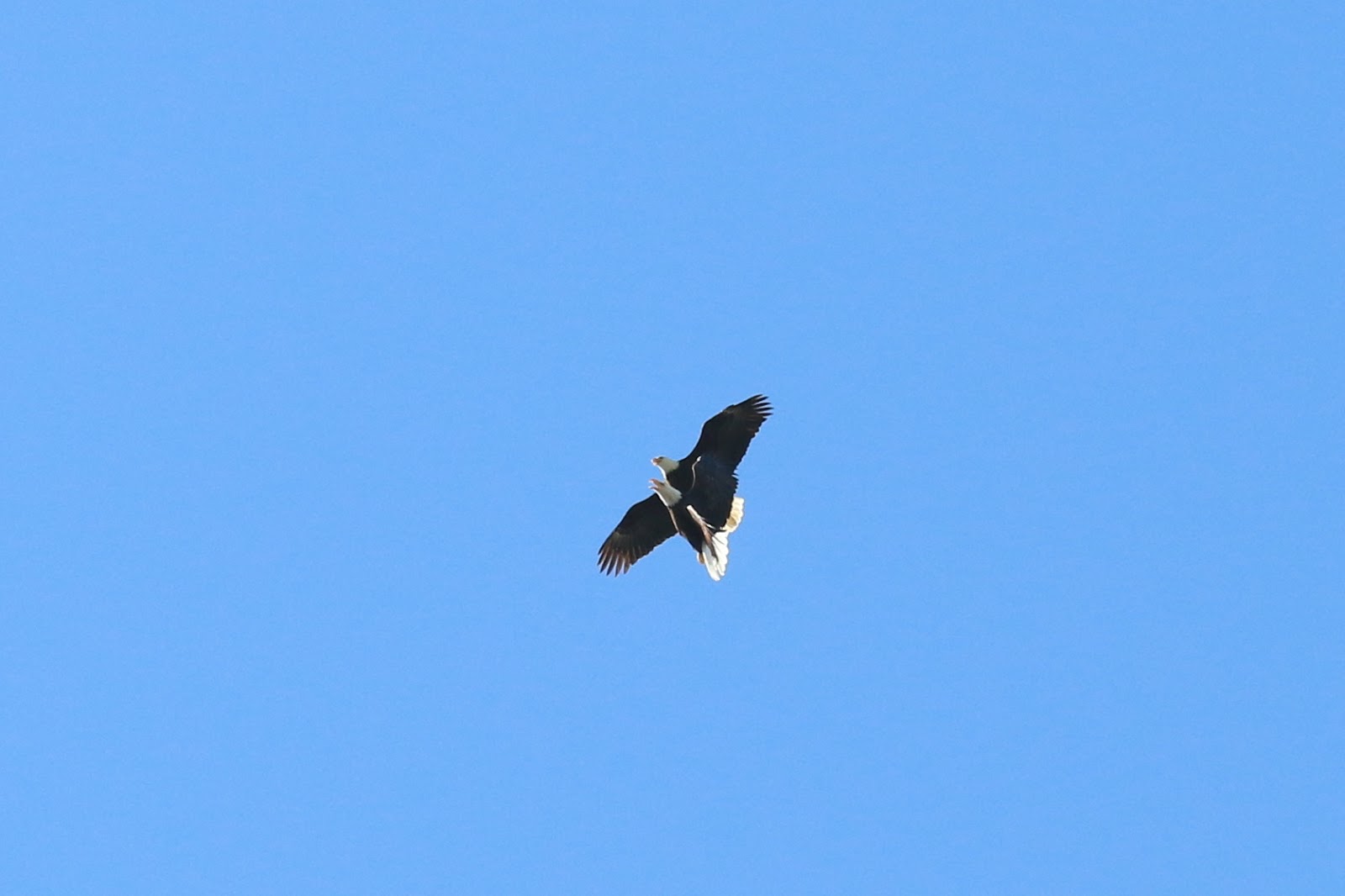 Around this time a FOURTH (sub-adult) Bald Eagle showed up, like they had all decided earlier, "Let's meet at Jen's house." 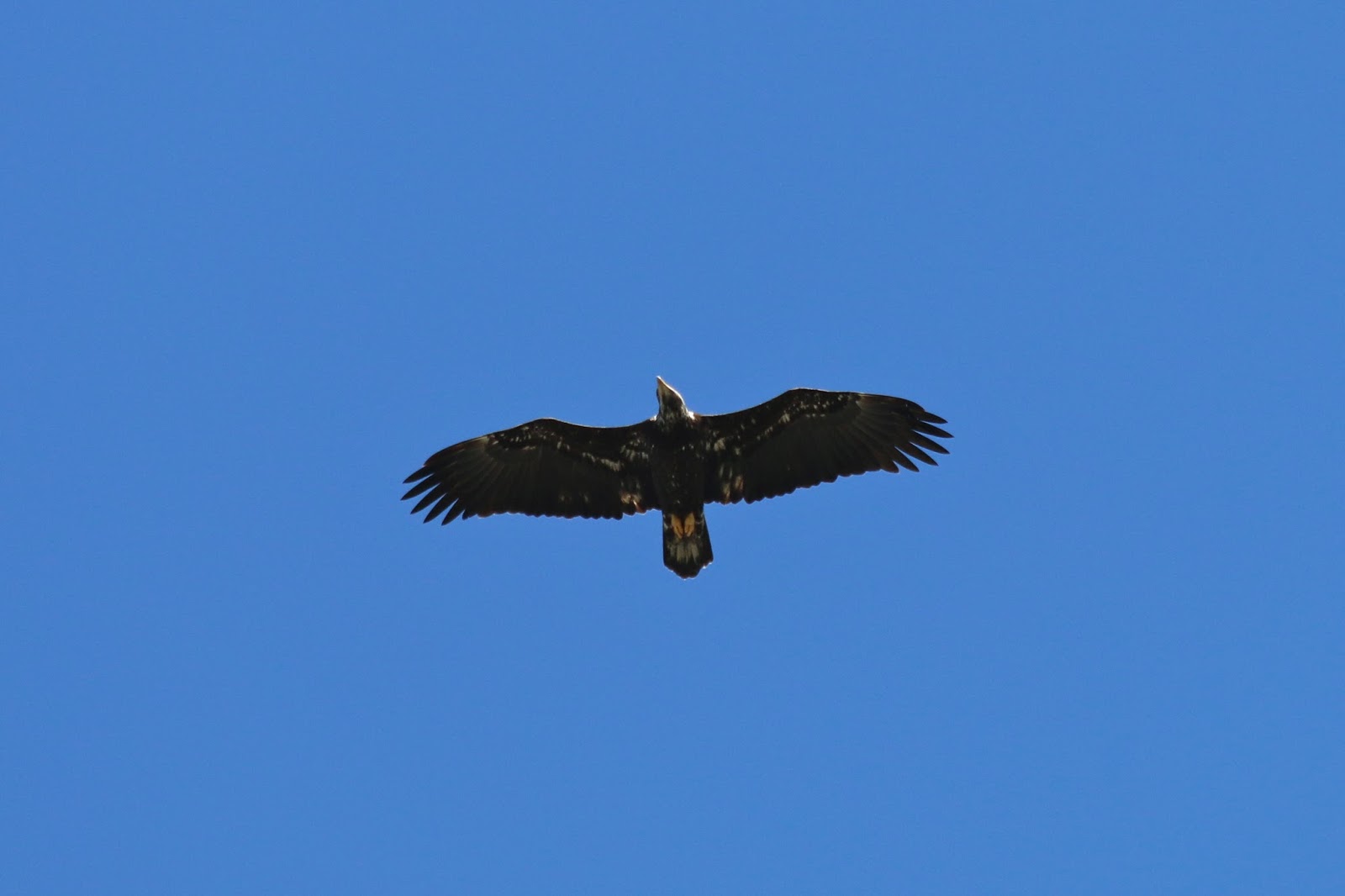 They soared together into the sun where I lost sight of this awesome family reunion.  I returned to my dirt for a few hours until I was again distracted by birds in the sky.  This time a couple of Red-tailed Hawks were soaring together, looking playful. 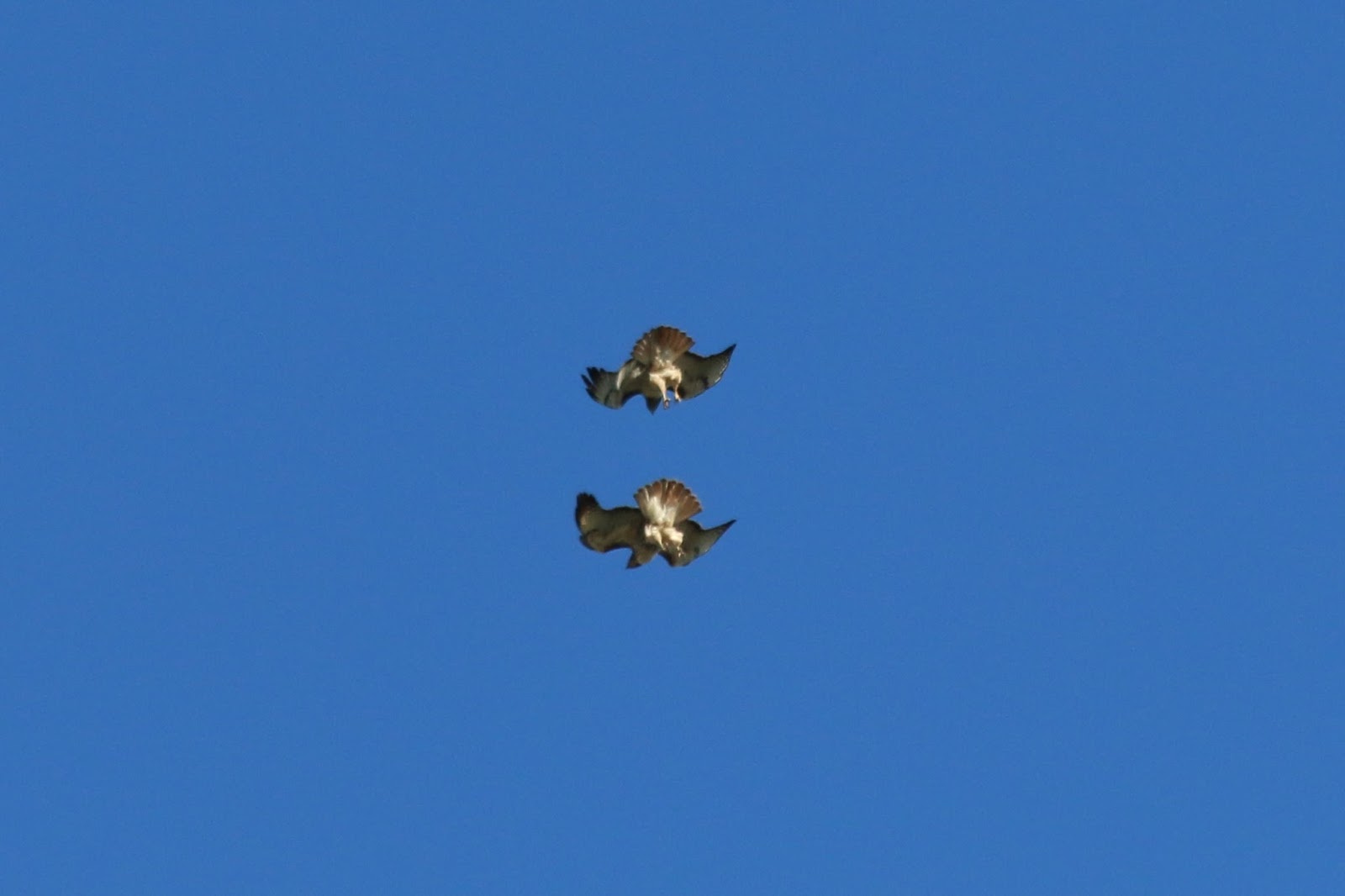 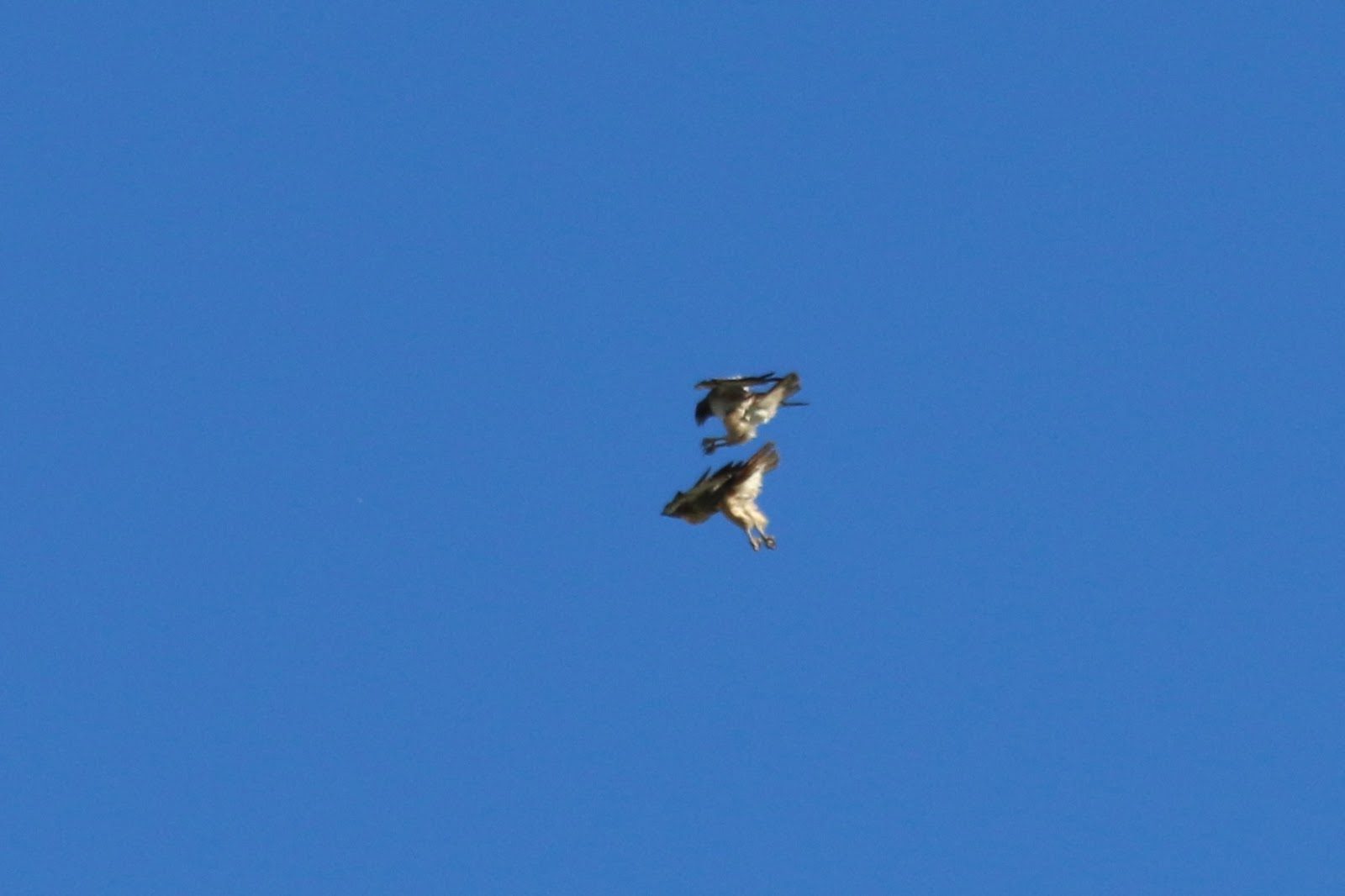 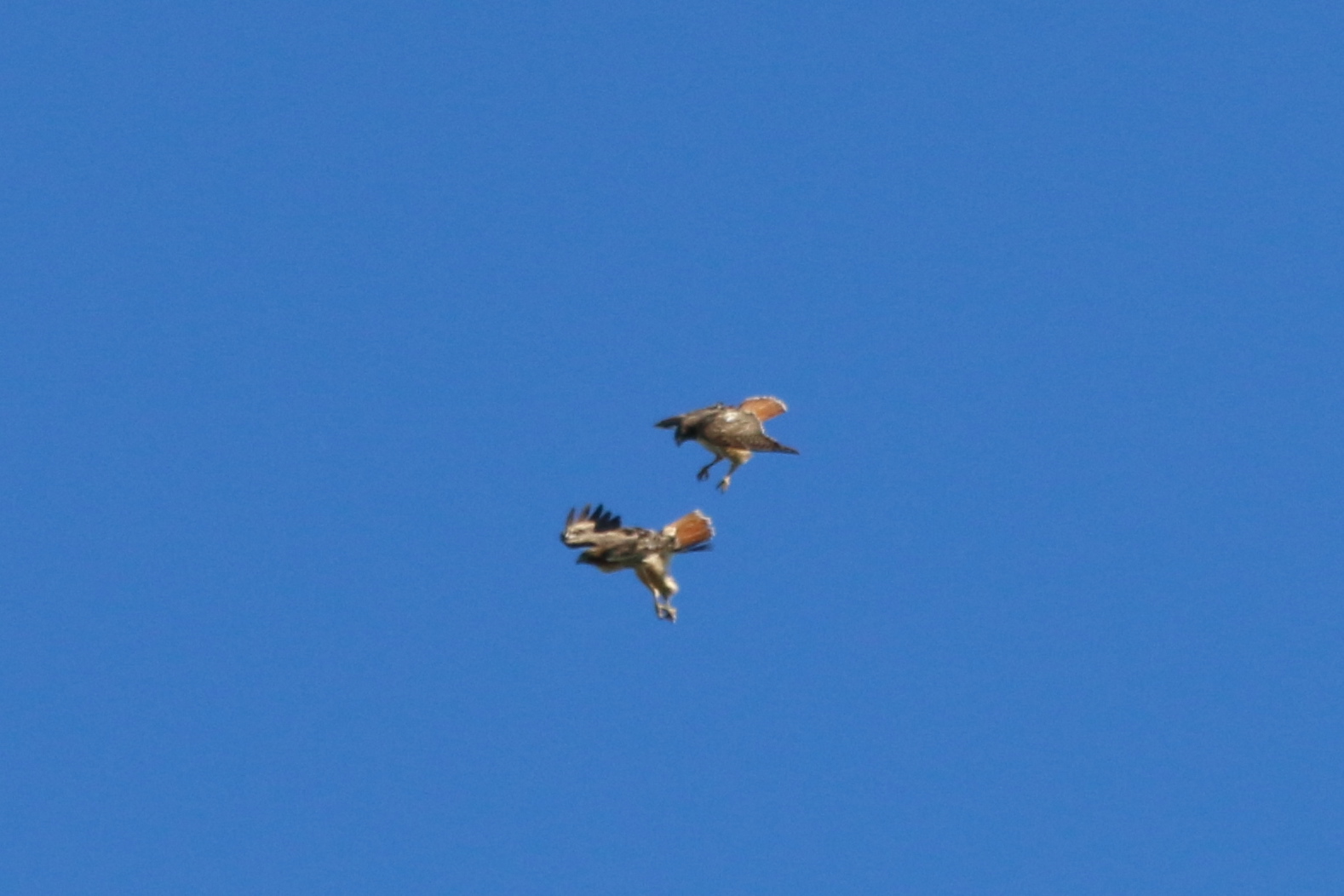 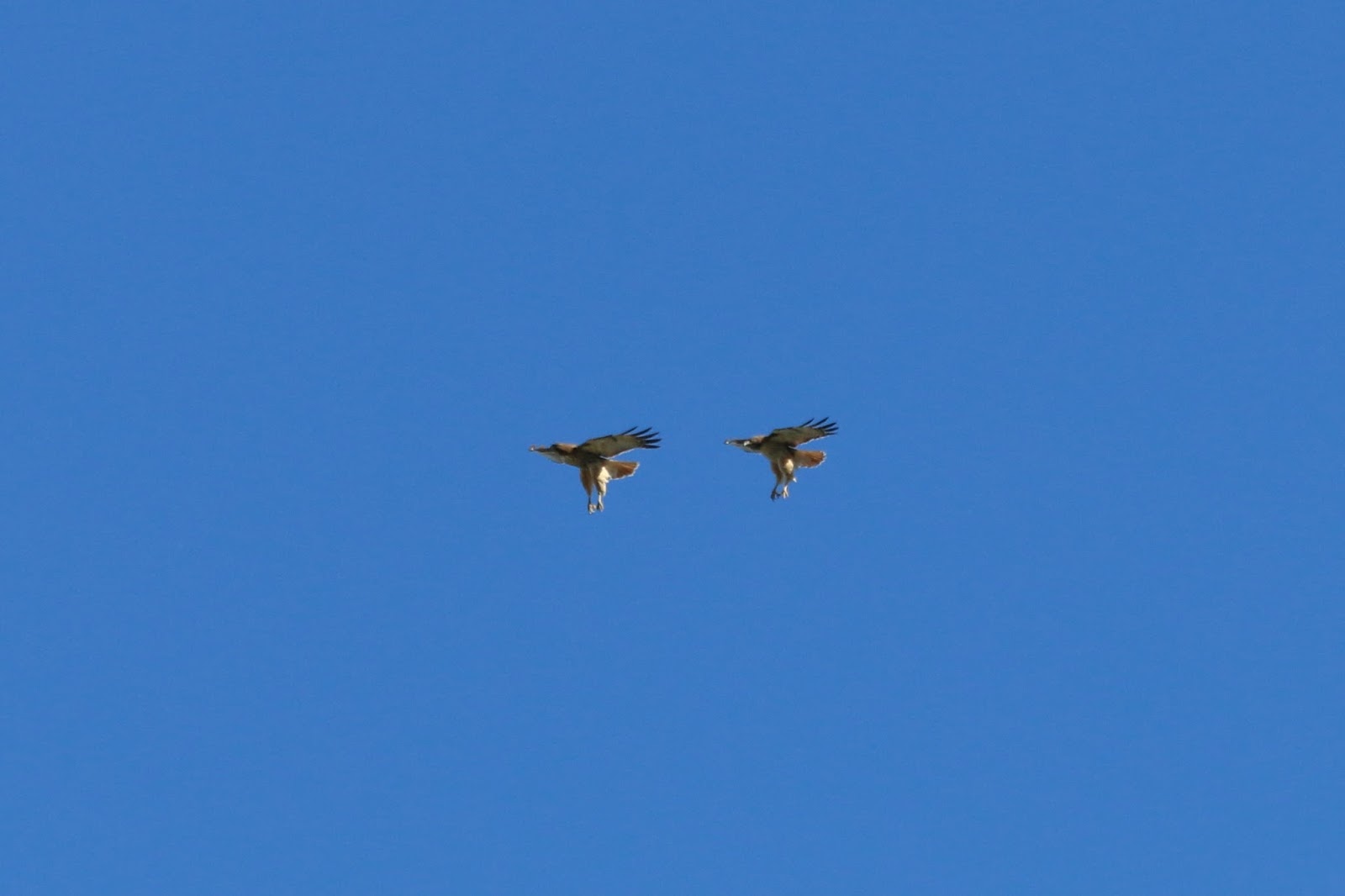 I recently noticed a pair of Red-tailed Hawks at a nest about half a mile from me, so perhaps these are the same hawks.  Fun stuff.

I'm up to 88 motorless birds for the year with #88 herself being a Rufous Hummingbird along the Columbia Slough: 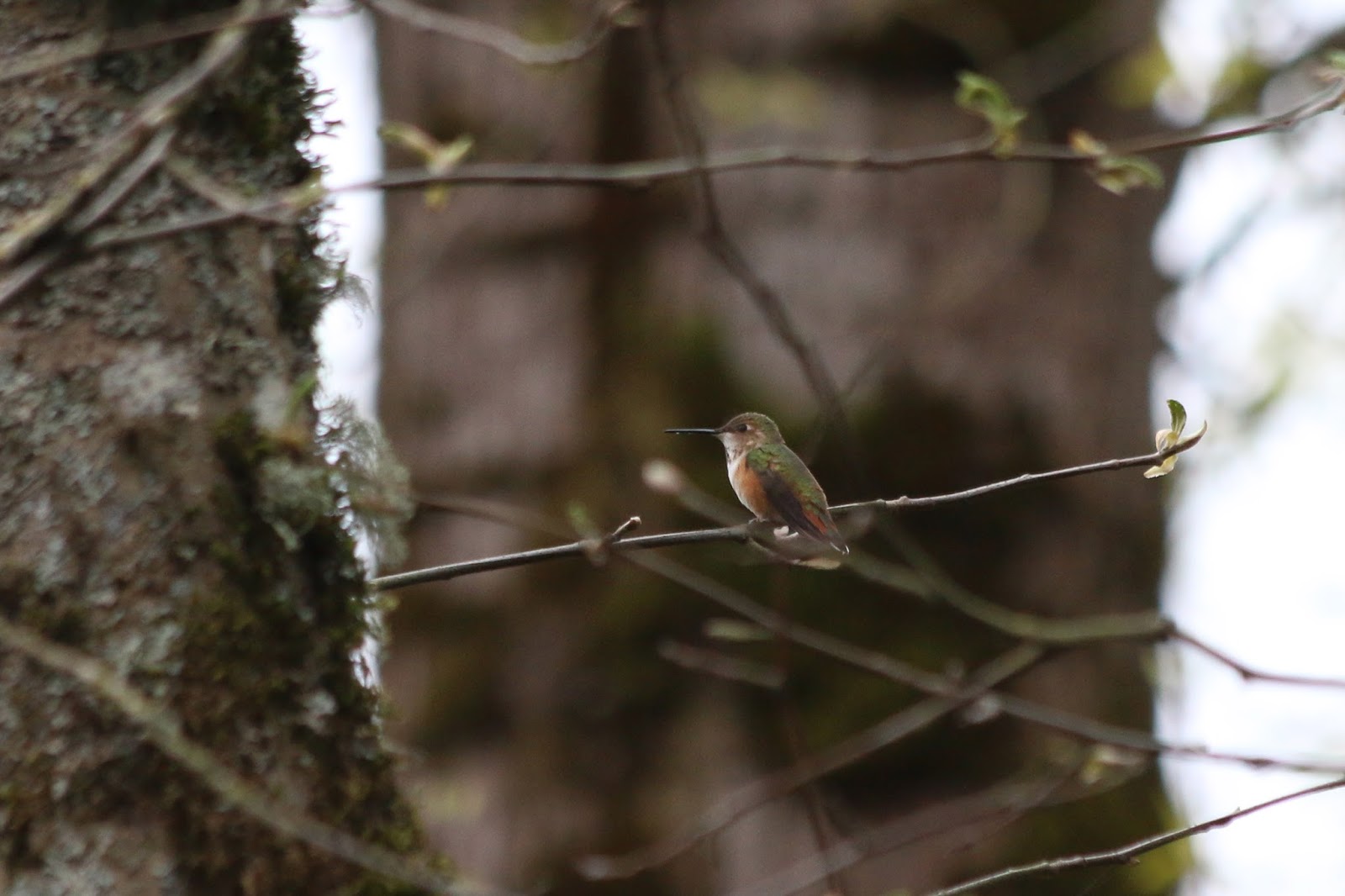