on April 08, 2015
Yesterday I went back out to Gilly to explore a few areas in hopes of finding good birds.  And yes, Gilliam and I are so close now that I am calling her/him Gilly.  My first destination was Willow Creek Wildlife Area, which requires driving some beautiful miles through Morrow County. 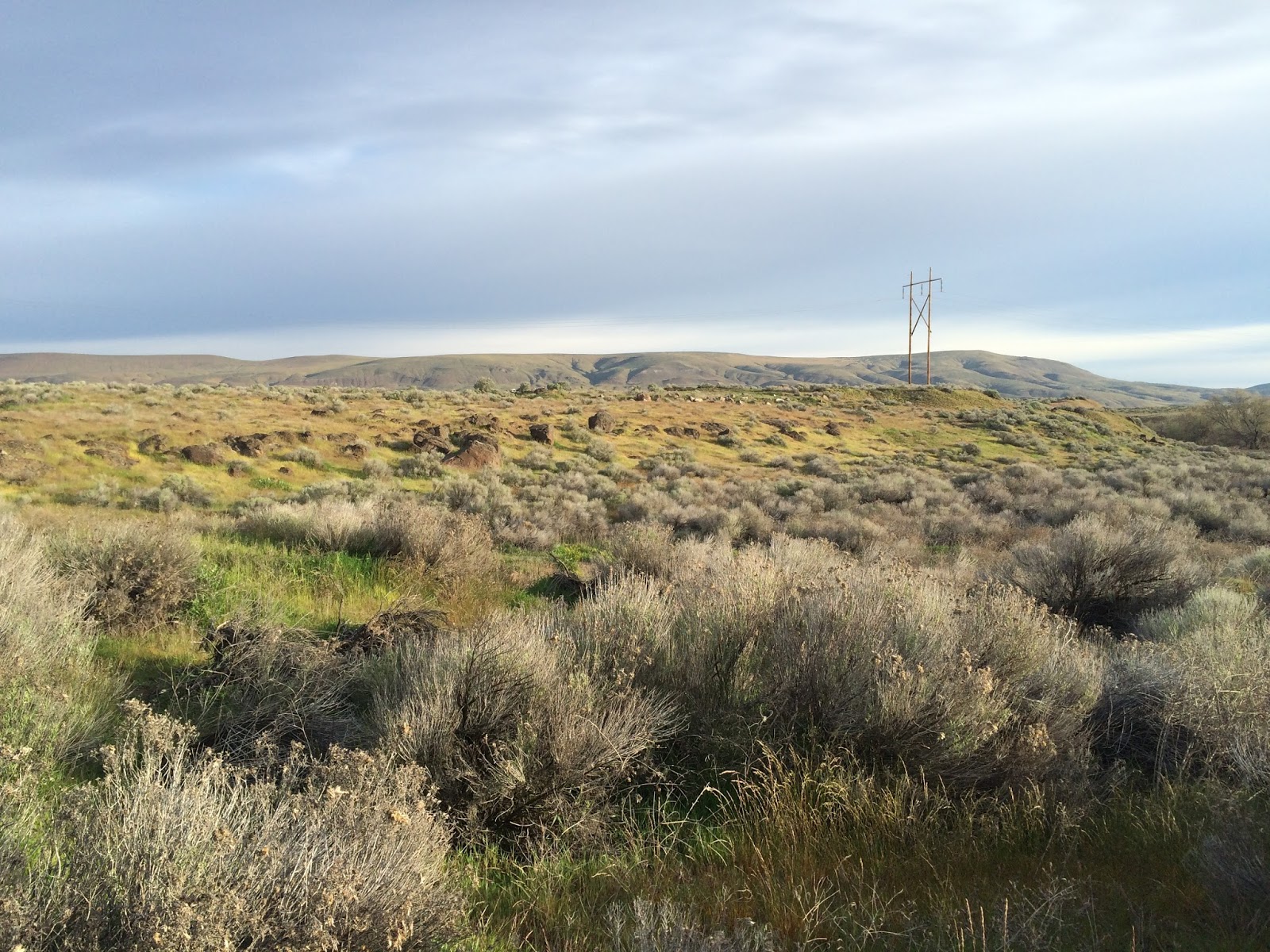 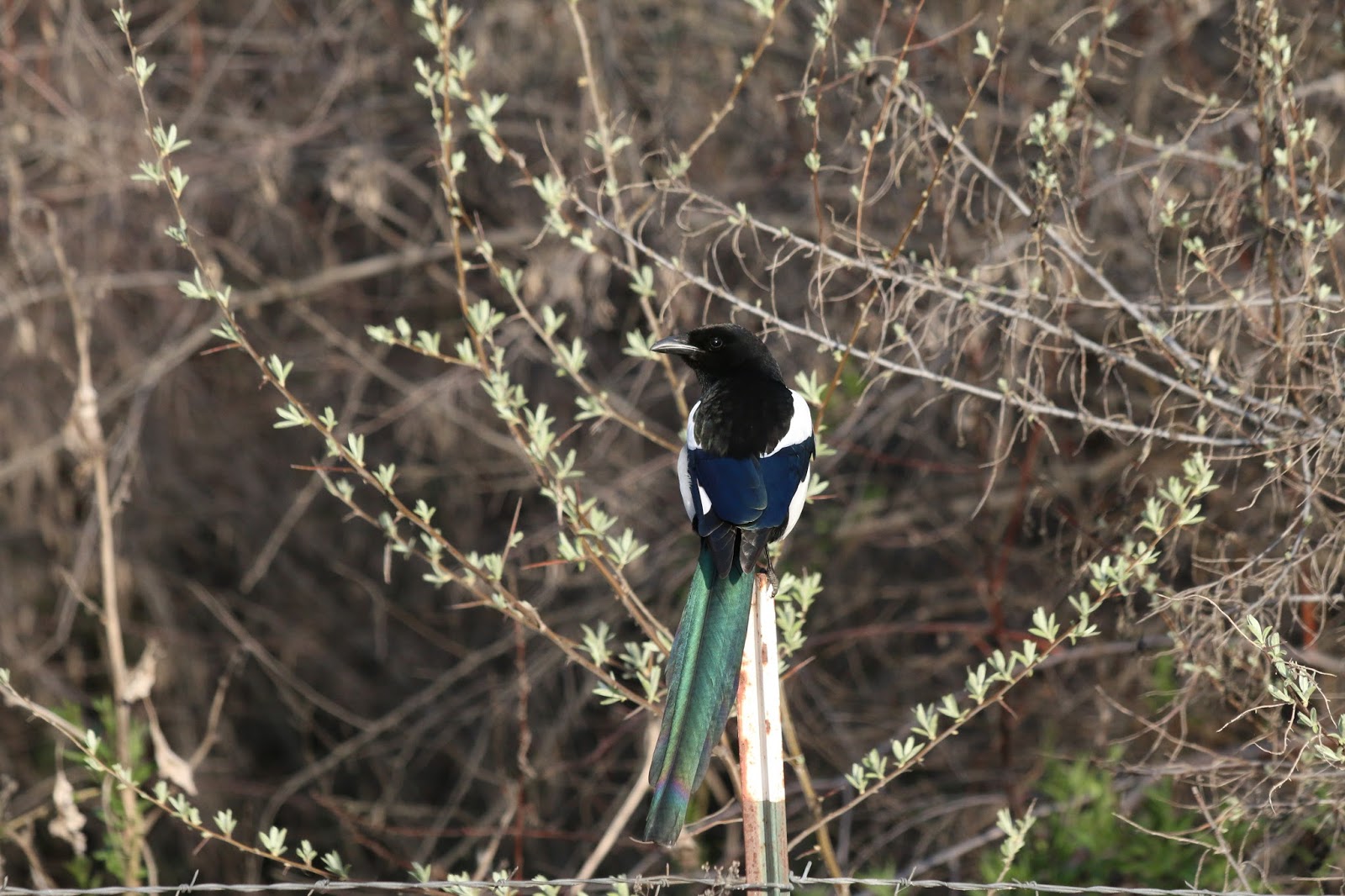 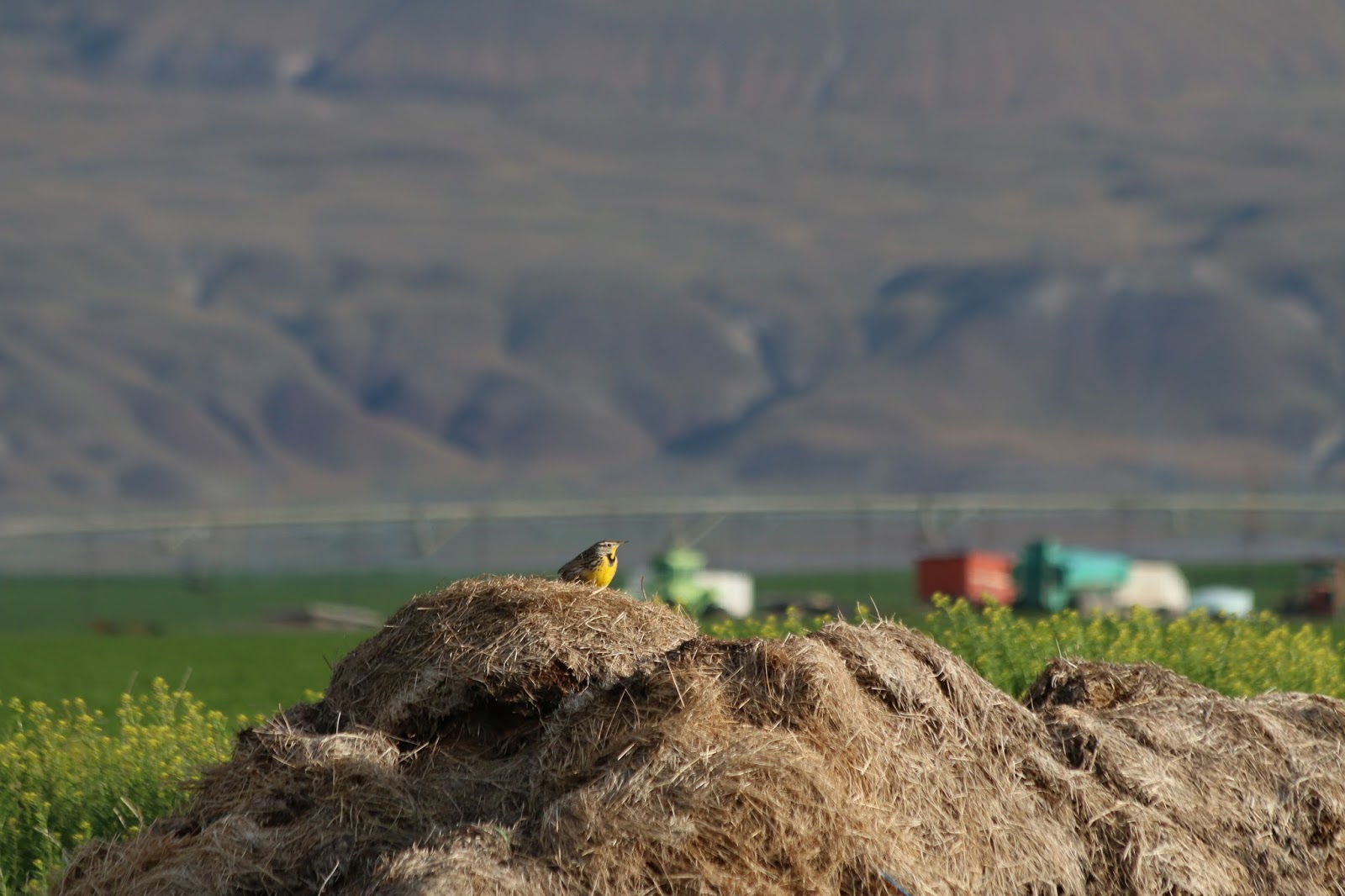 I finally reached Willow Creek after many stops to pick through sparrow flocks, look at wildflowers, take bad photos of a possible Swainson's Hawk, and gawk at a couple of Long-billed Curlews.  No curlews in Gilly for me, unfortunately. 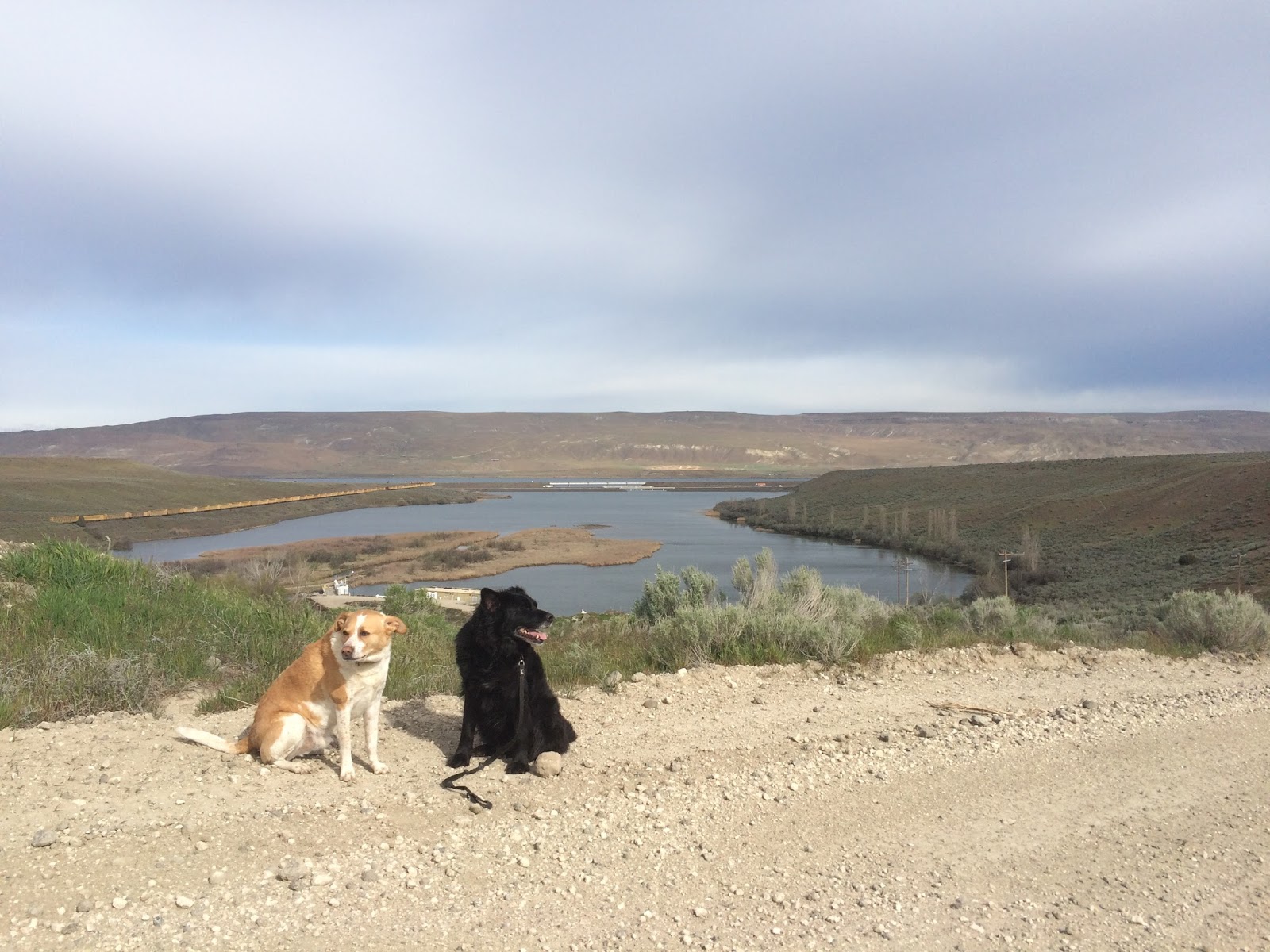 Mutts not impressed with the views of Willow Creek.

We walked around the area for over an hour and I picked up a good number of new birds for Gilly.   First off were Cedar Waxwings. 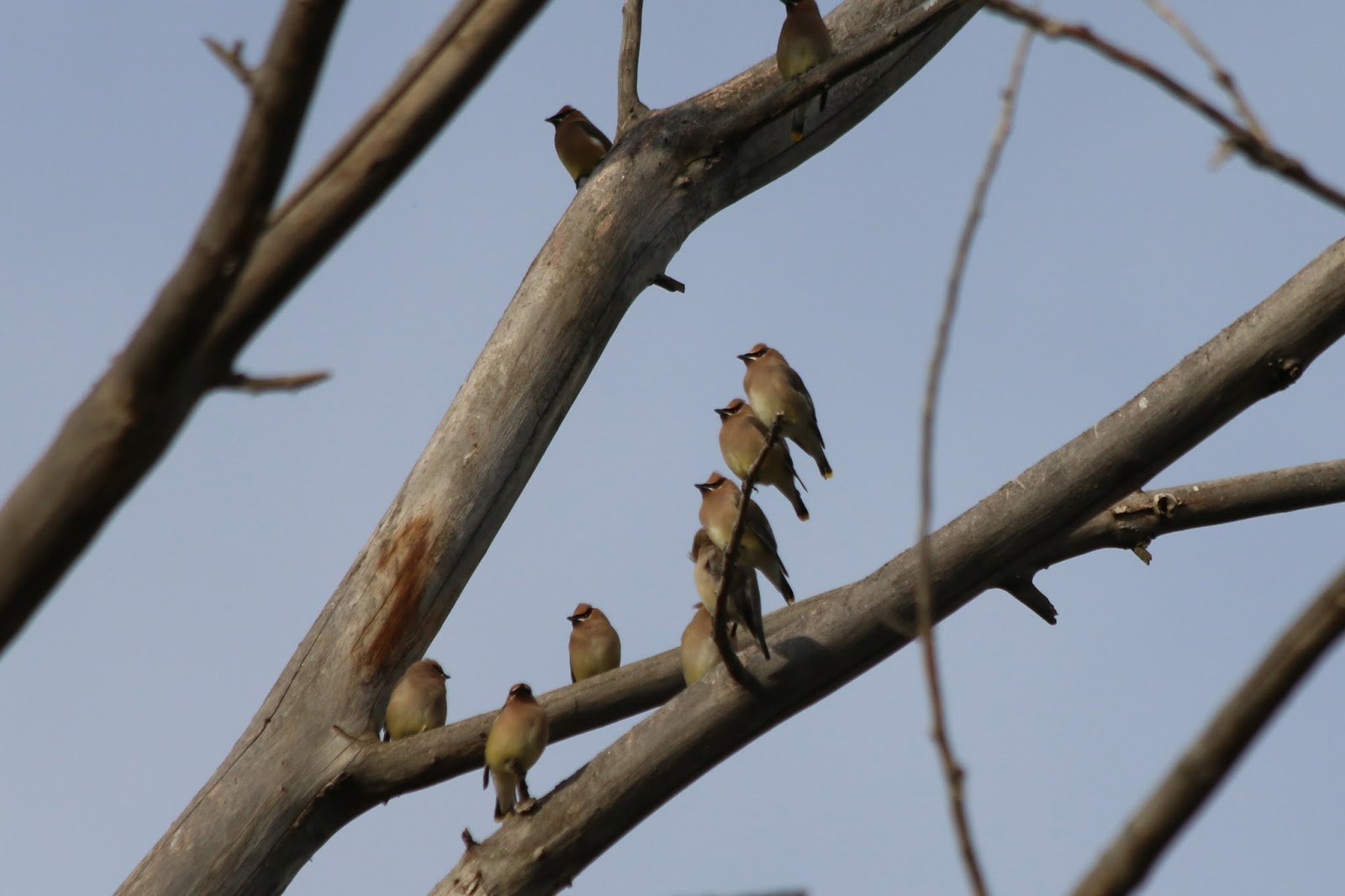 Northern Rough-winged Swallows seemed to make up the majority of the swallow party out on the water. 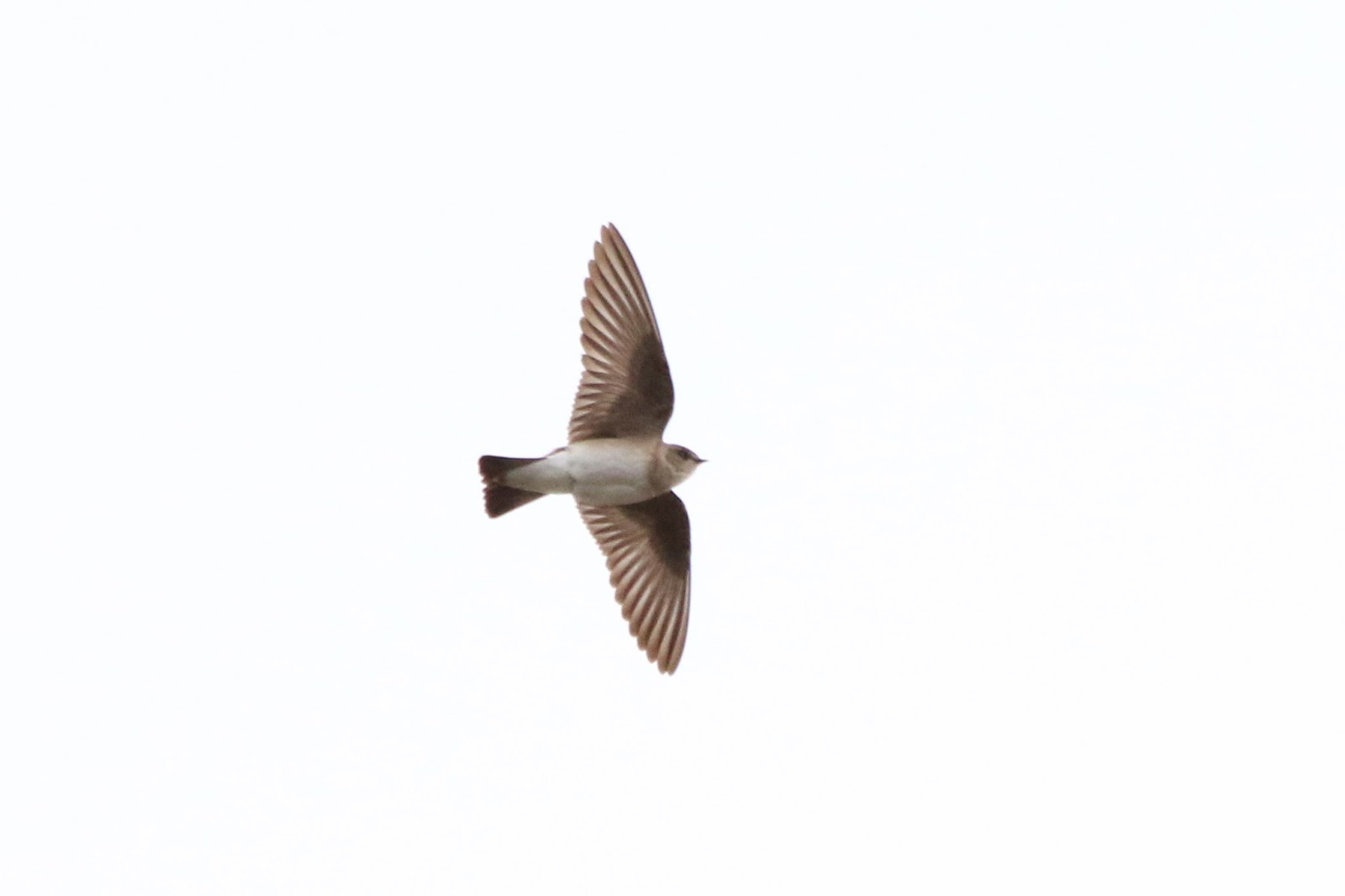 Also out over the lake were a couple of Caspian Terns, an Osprey, and mostly California and Ring-billed Gulls. 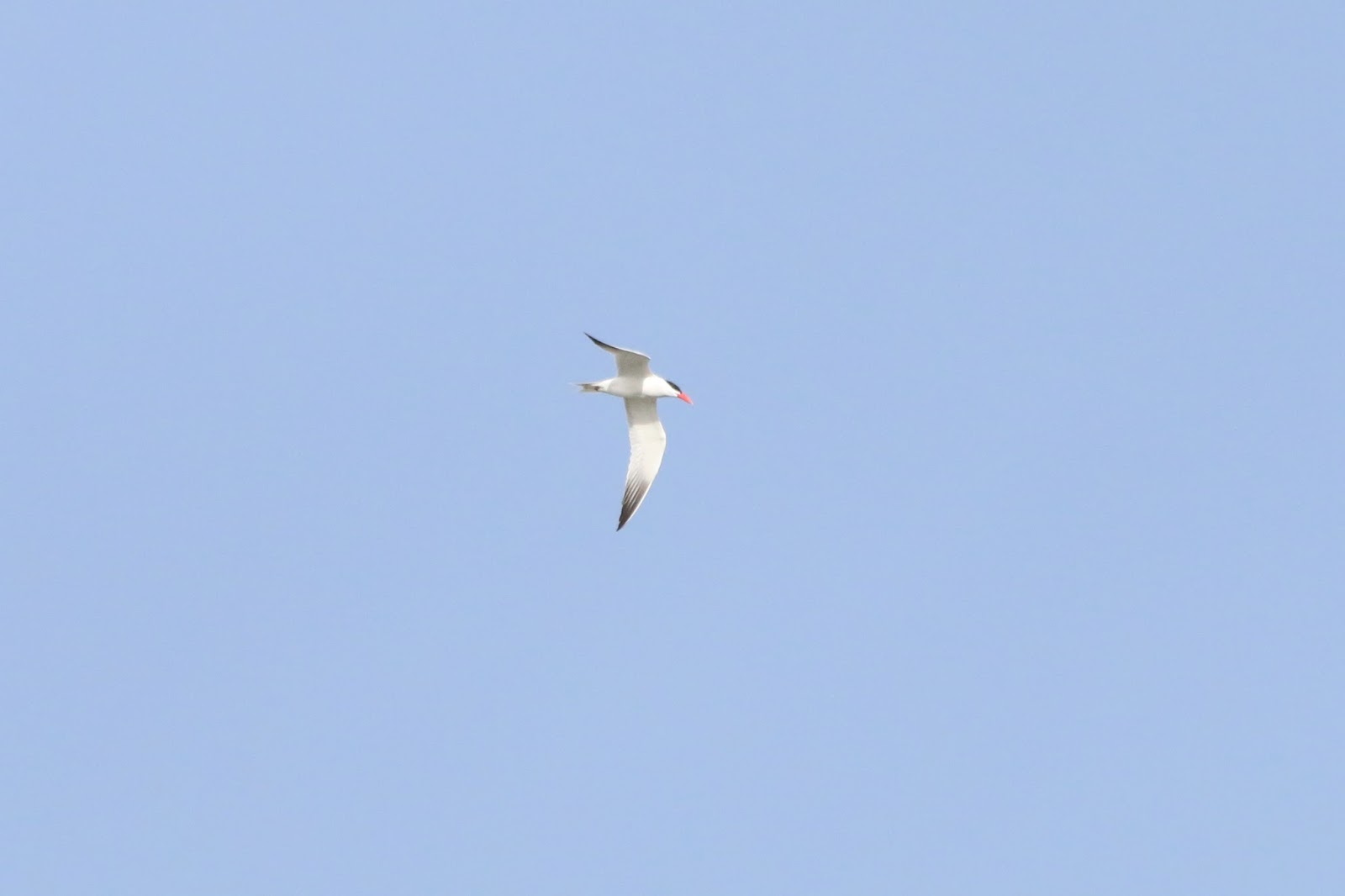 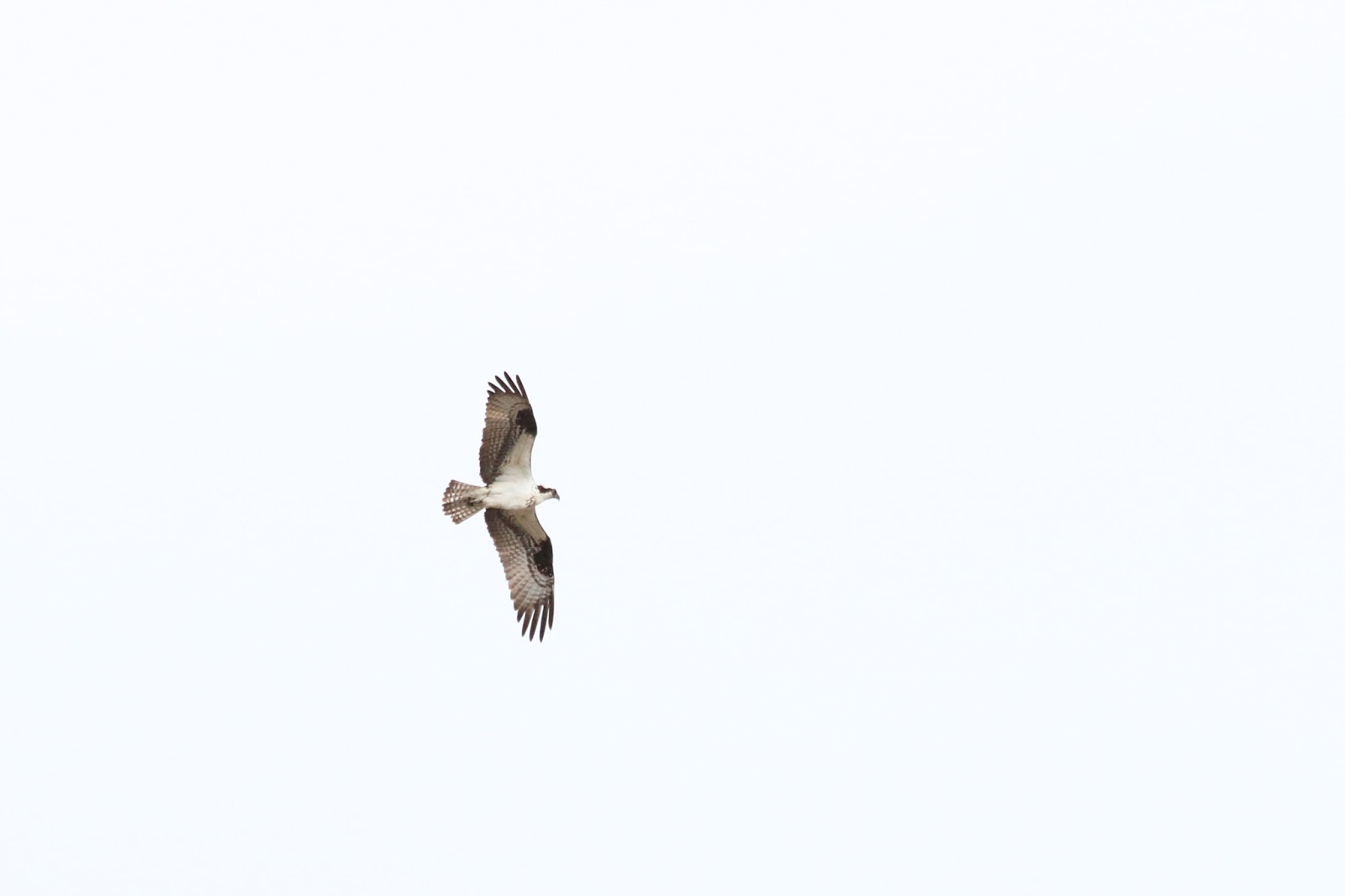 Out on the lake itself were coots, Green-winged Teal, Lesser Scaup, Northern Shovelers, Mallards, Gadwalls, a Great Blue Heron, and most exciting for me, four American Avocets.  No photos worth sharing.

After wandering around here I drove back up towards the highway, stopping again for some balsamroot and phlox. 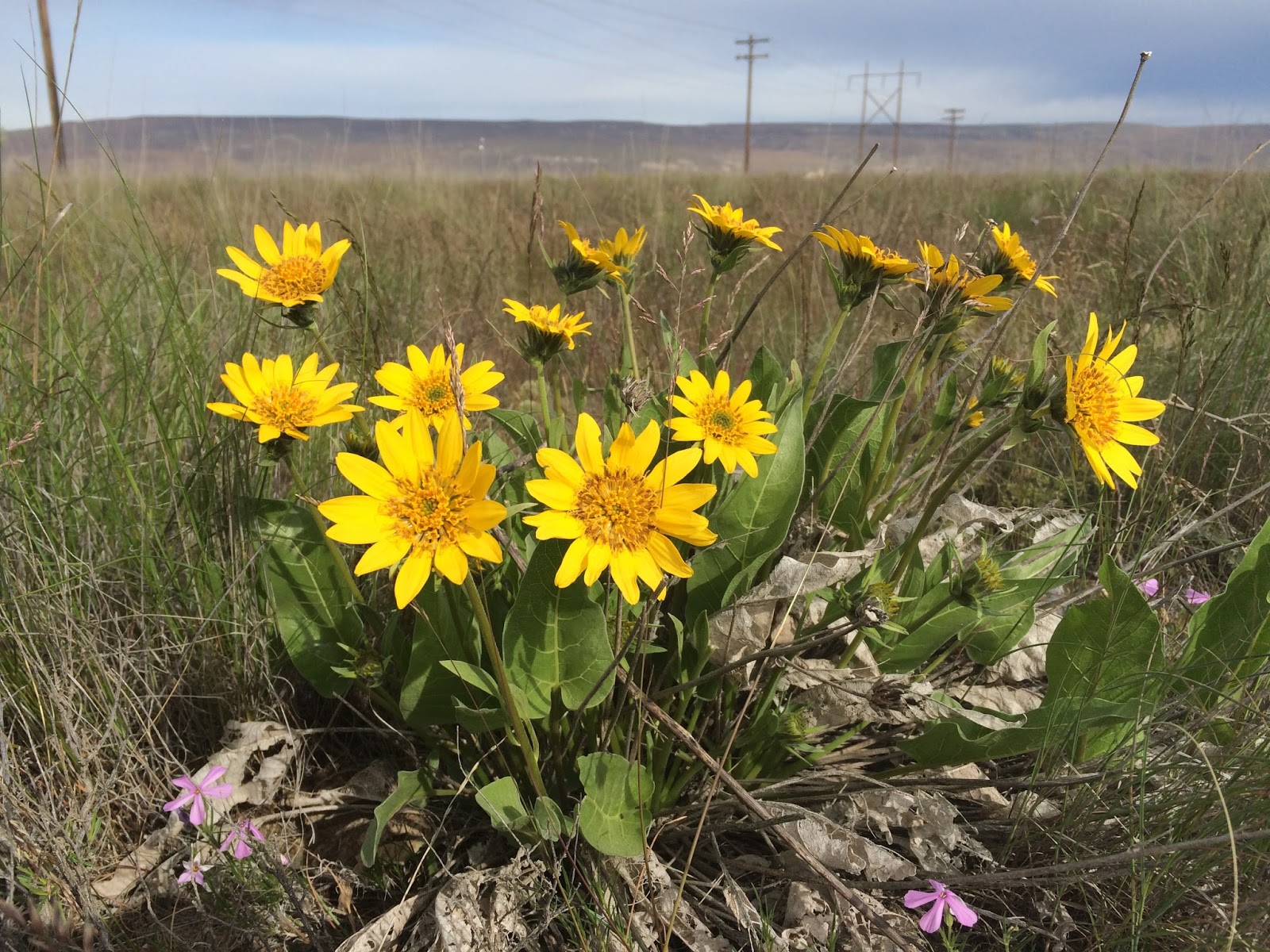 I got back on 84 to head back to Arlington to pick up a snack and head south to Rhea Road (Rhea Lane?  I swear the sign says Lane, but google maps does not agree).  The first thing I stopped for was three pronghorn out in a field not too far from the road. 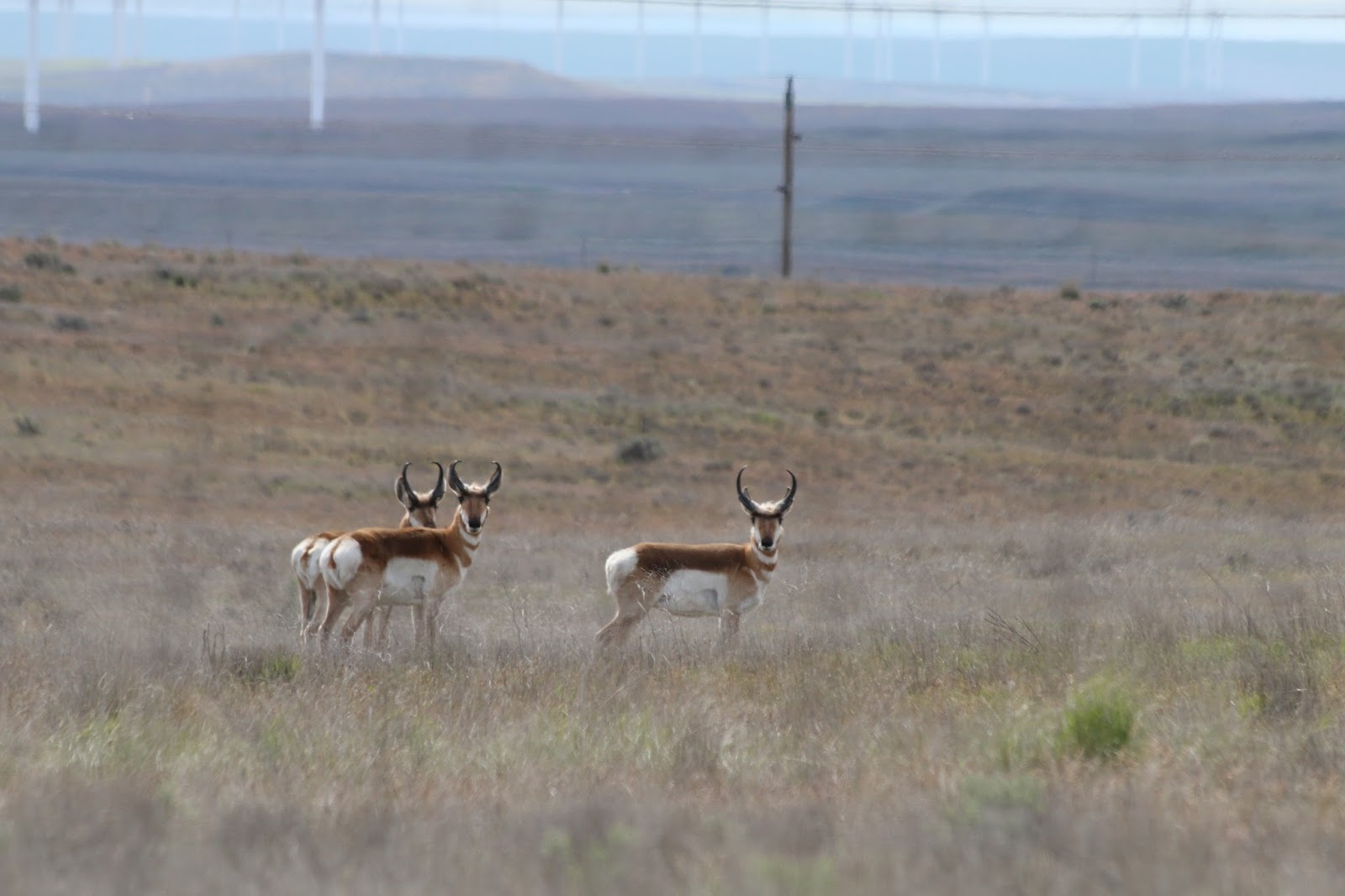 Both male and female pronghorn have horns, though the females have much smaller and less visible ones.  Fun pronghorn fact I just learned from Wikipedia:  Males are further differentiated from females in having a small patch of black hair at the angle of the mandible. 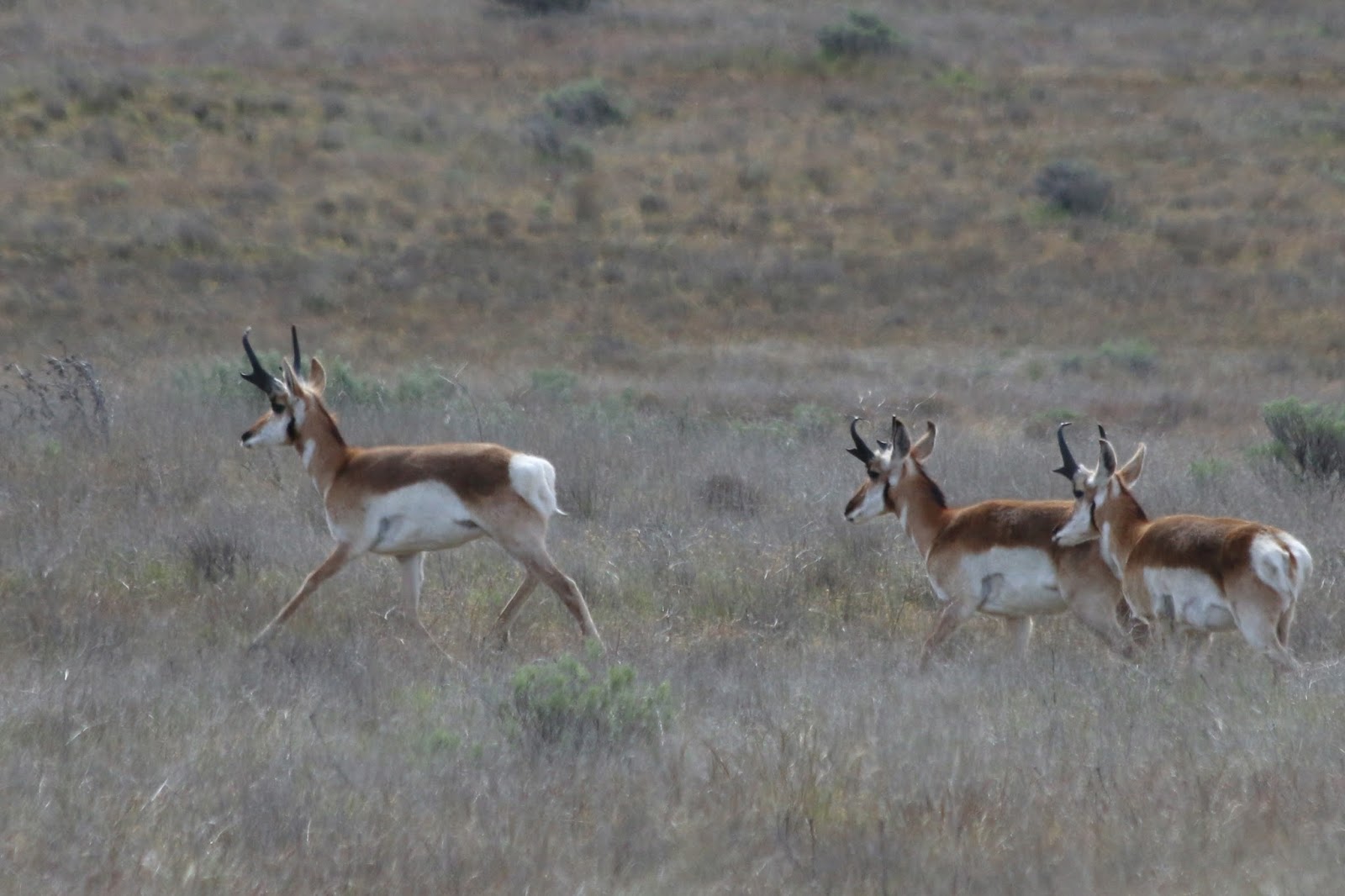 Along the road Horned Larks were flushing regularly though I managed to slow down enough to check out this dude and his wormy: 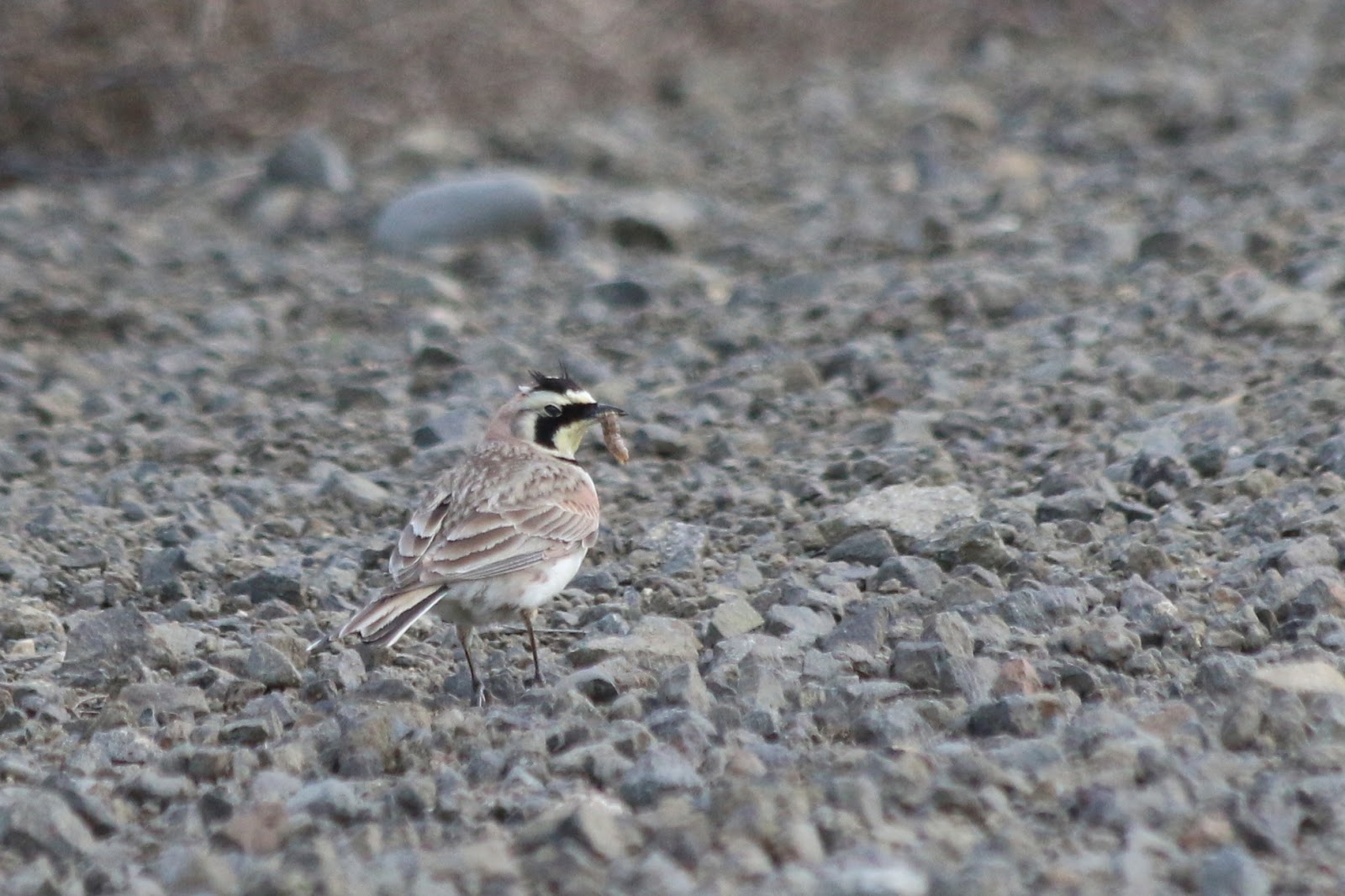 I kept driving hoping something interesting would turn up and eventually I spotted a hawk cruising through the wind farm. 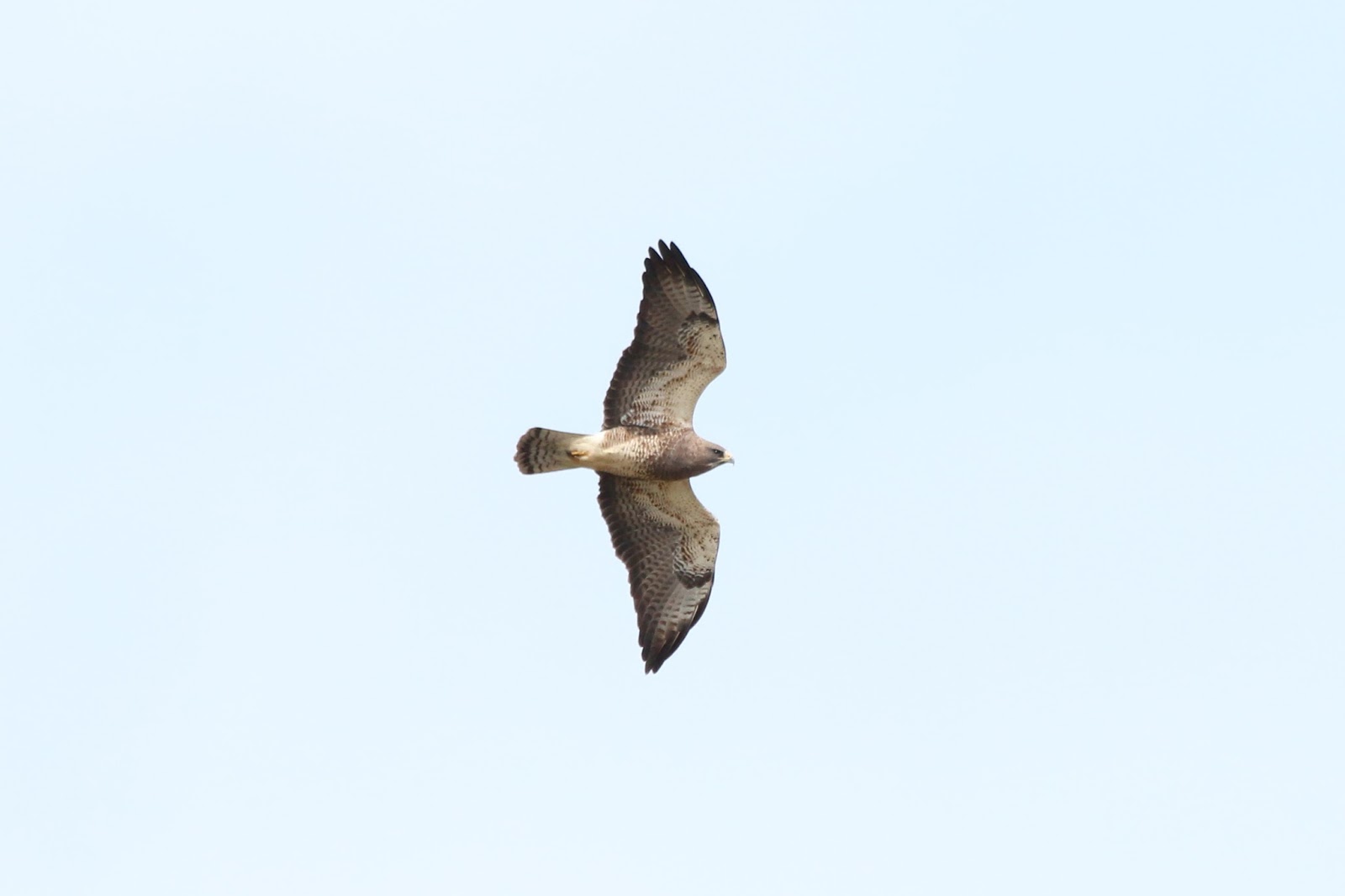 First Swainson's Hawk of the year!  What is it with these hawks soaring around the wind farms?  Do they just like the taste of danger?

I drove back along Rhea Road to Highway 19 to keep heading south.  Something in the road caught my eye... 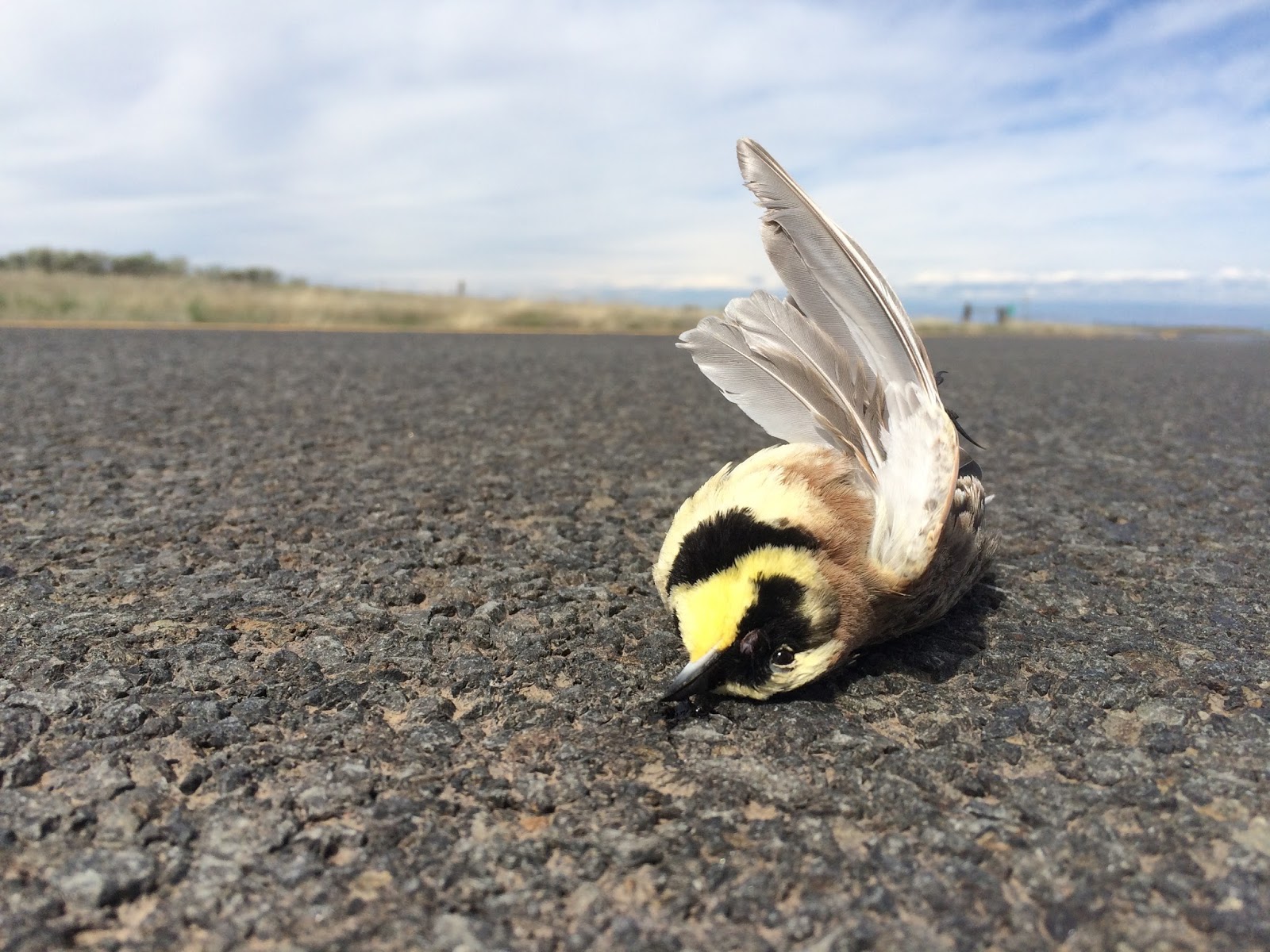 Why must they love standing in the road?  Sigh.

I made it to my final destination, Lost Valley Road.  I easily found the Great Horned Owl nest that I had seen on eBird, since it was practically over the road. 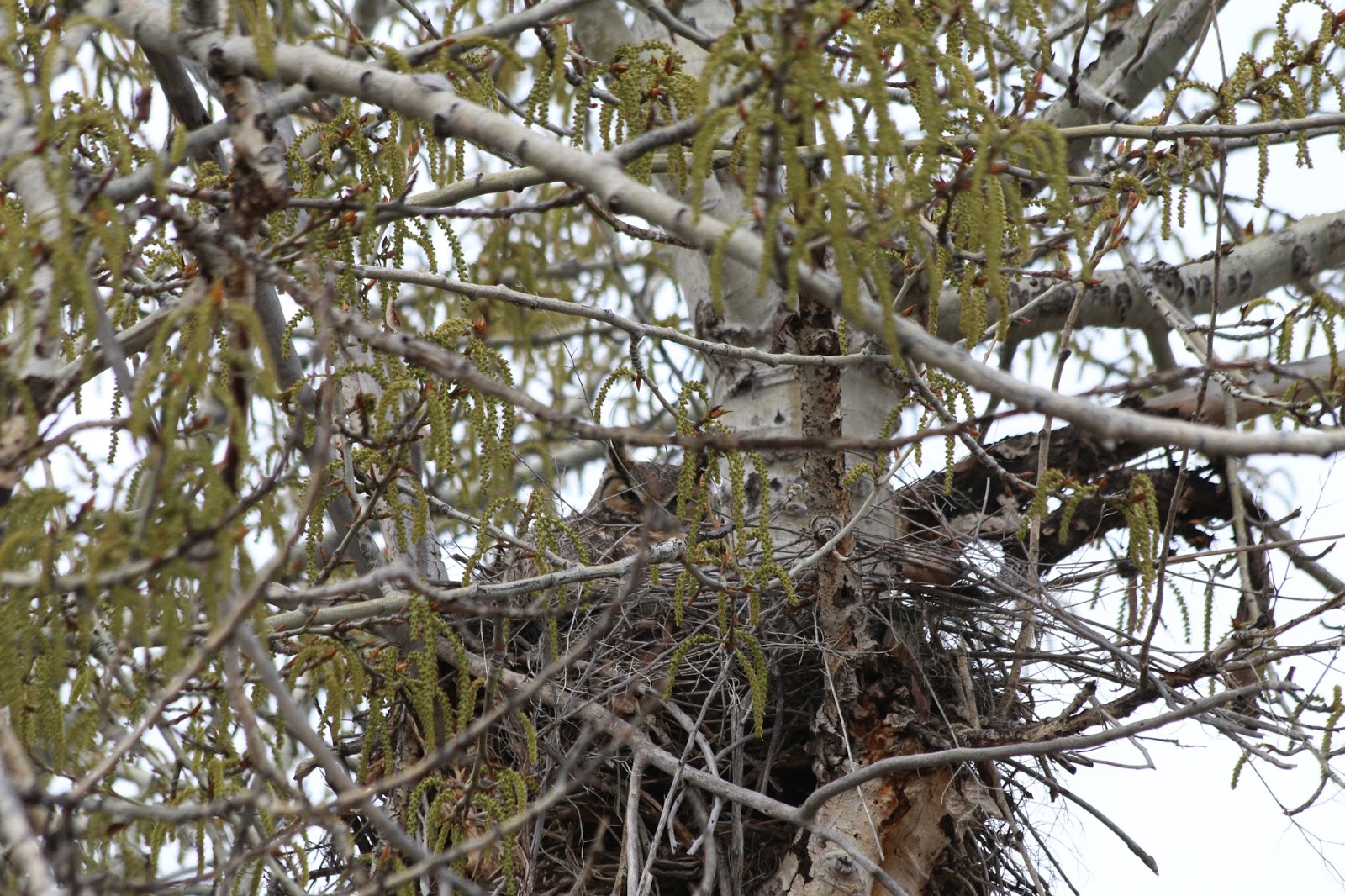 As I walked back to my car a Chukar flushed from one hillside over the road to the next.  I continued on down the road... 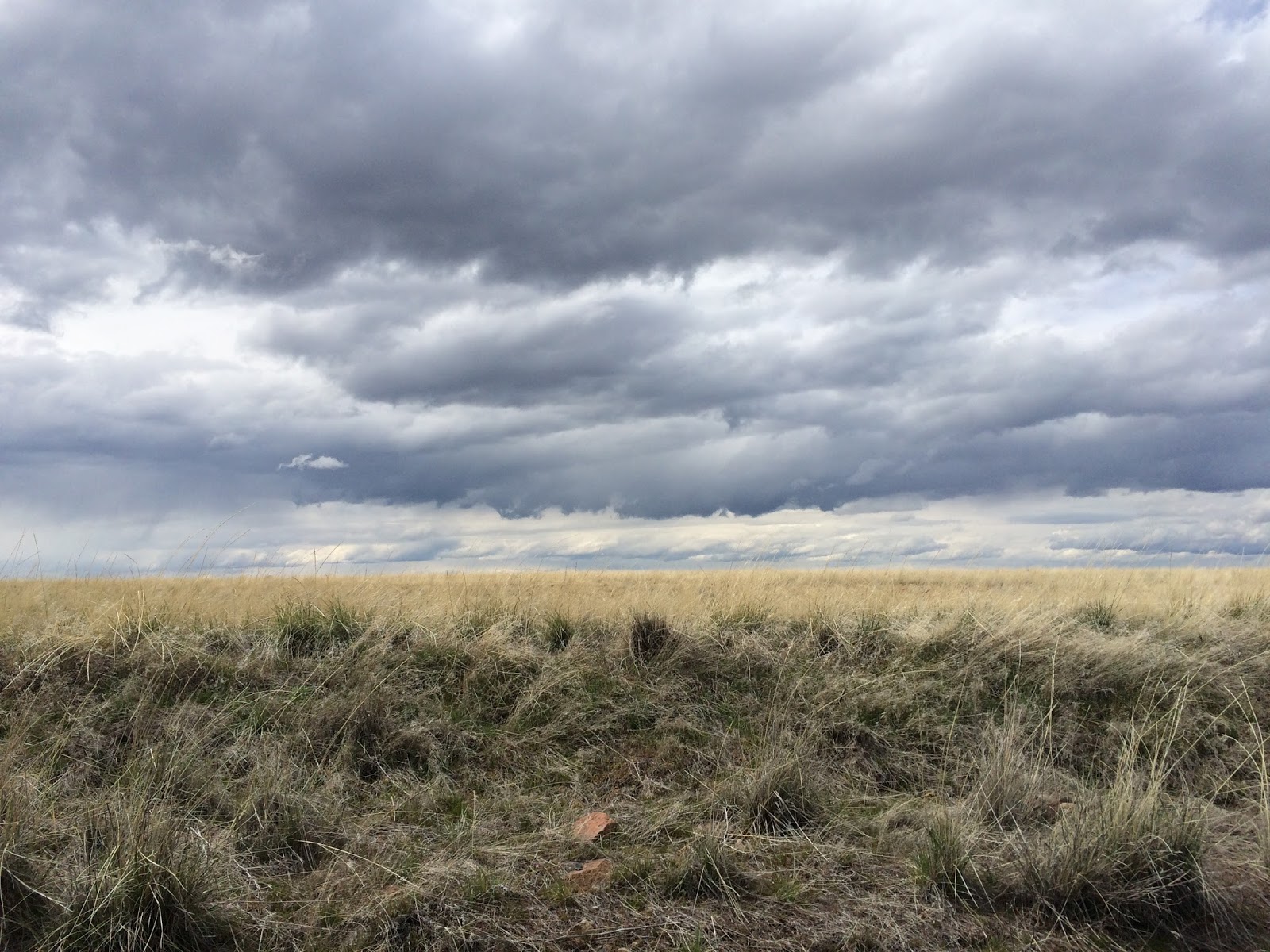 A pair of Mountain Bluebirds were fly-catching from a fence. 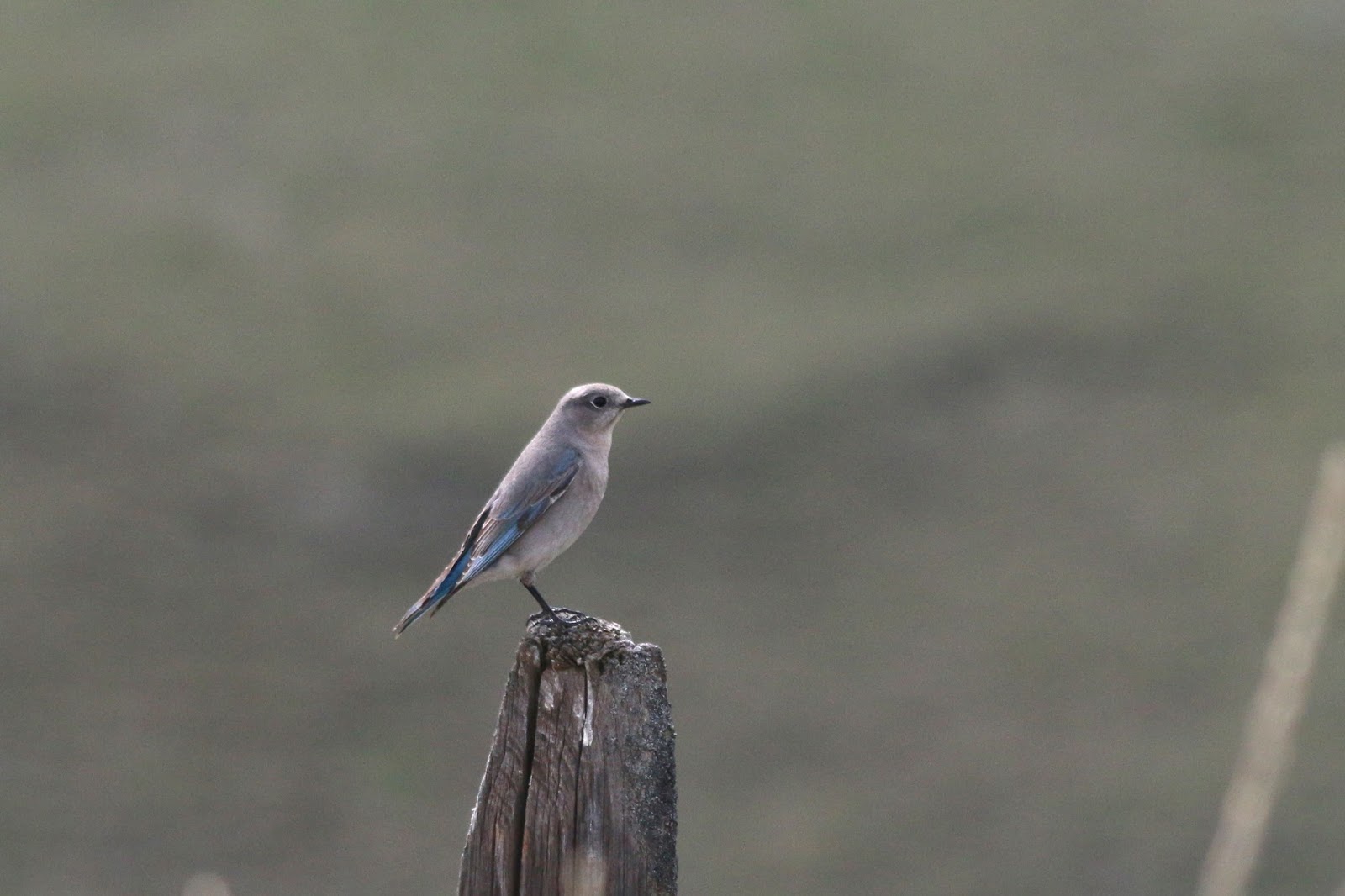 Lost Valley Road descends into a valley after seven or so miles, and eventually hits some of the limited tall conifers in the county.  Here you can see the forest areas in the distance: 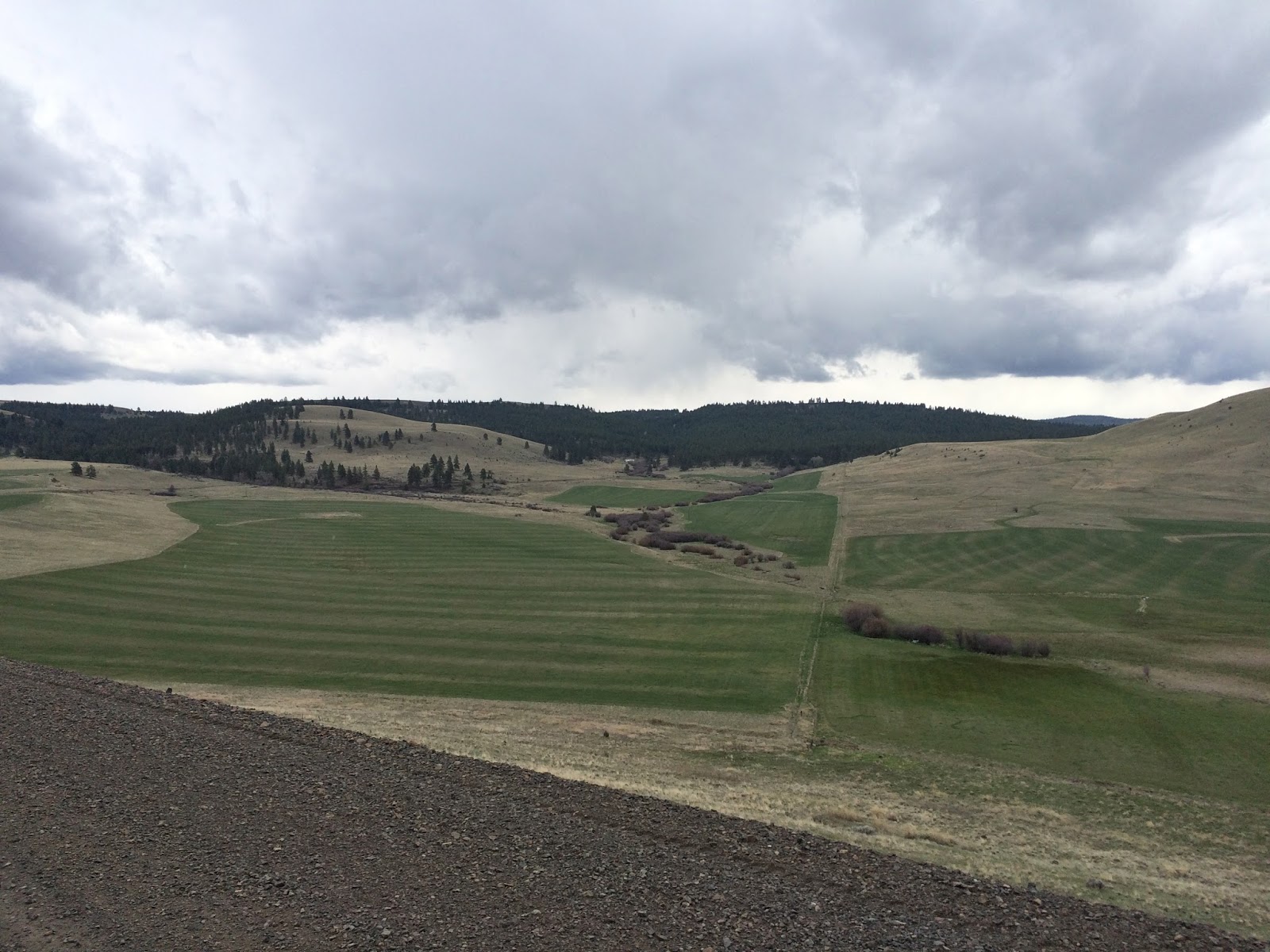 The problem with birding this area is that there is no cell service and without a GPS I was not quite sure where Gilly ends and Wheeler County begins.  I ended up erring on the side of caution and birded only the first .7 miles from where I first found trees.  I managed to pick up Steller's Jays, Western Bluebirds, and a Mountain Chickadee. 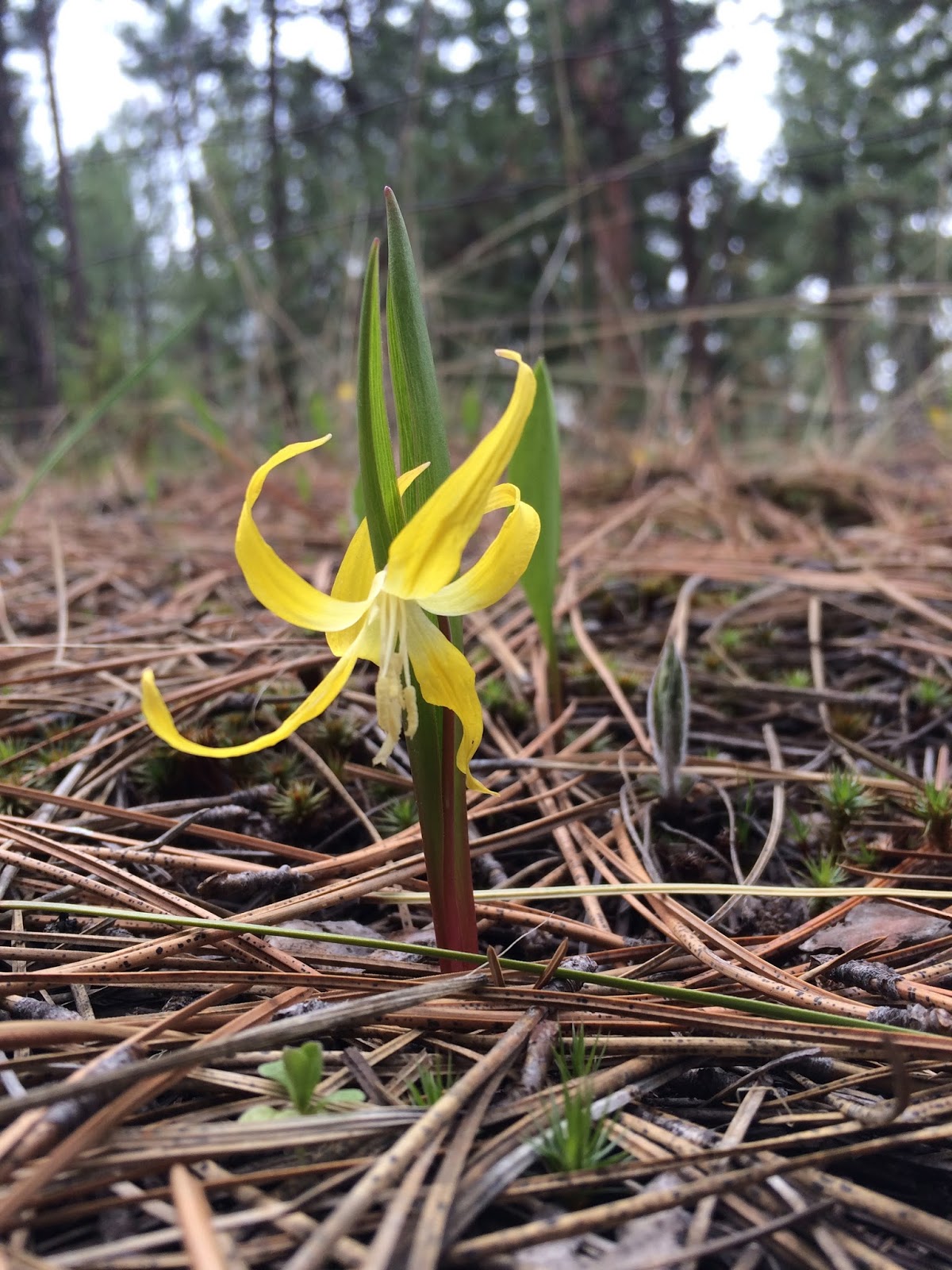 I headed back up Lost Valley and back to Condon, then west on 206 to start heading home.  I pulled over at a gravel lot to let the dogs stretch their legs and found a lone pronghorn across the road.  He walked along the fence until he found a place to jump it and slooooooowwwwwlllly started to cross.  For the fastest land animal we have, it was ridiculous.  Then a truck came. 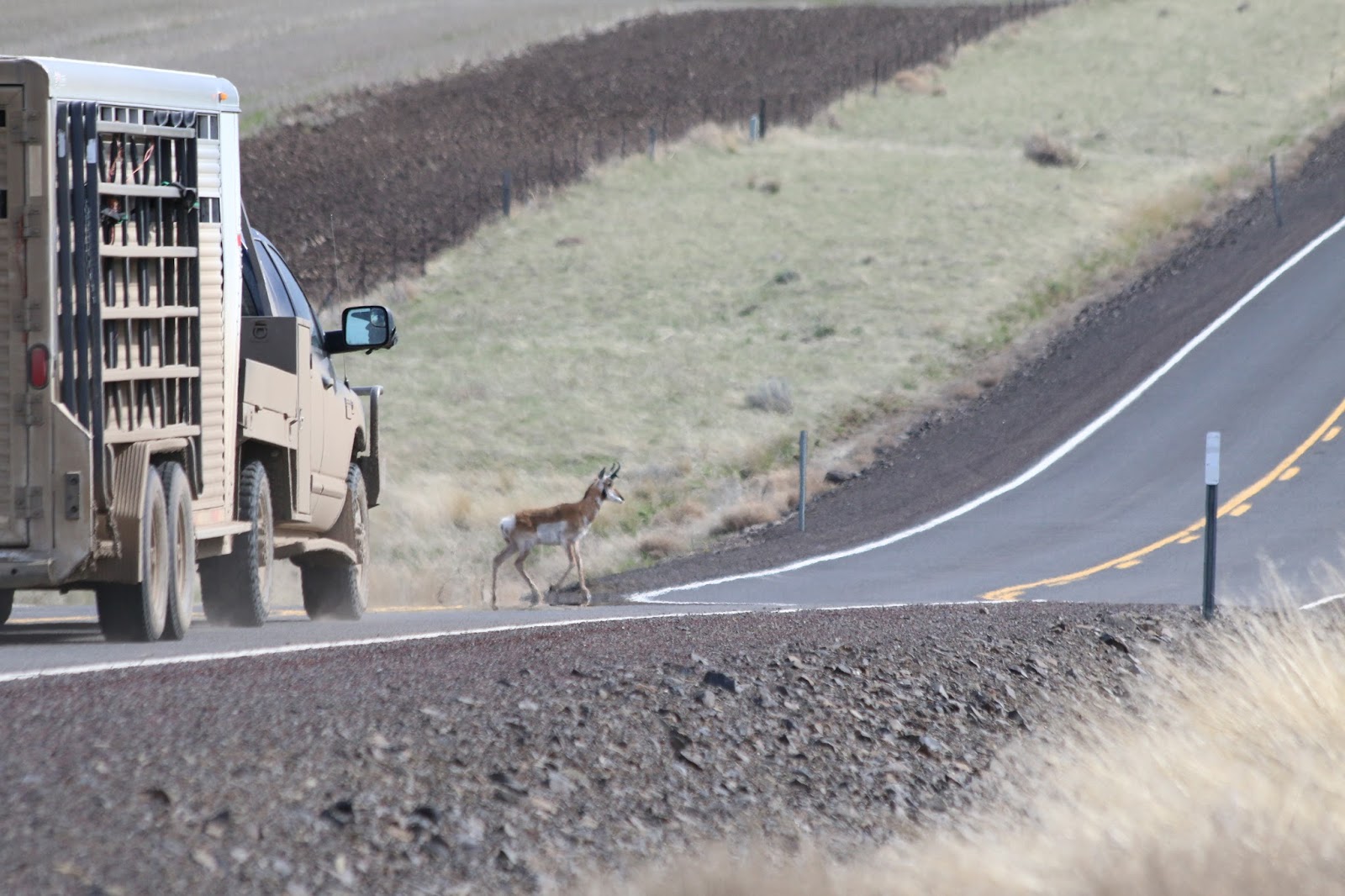 Thankfully the driver honked the horn like crazy and the pronghorn hopped back to safety.  After the truck passed, he tried again, super slowly, pausing in the middle, and carried on.  These animals out here are all danger junkies I swear. 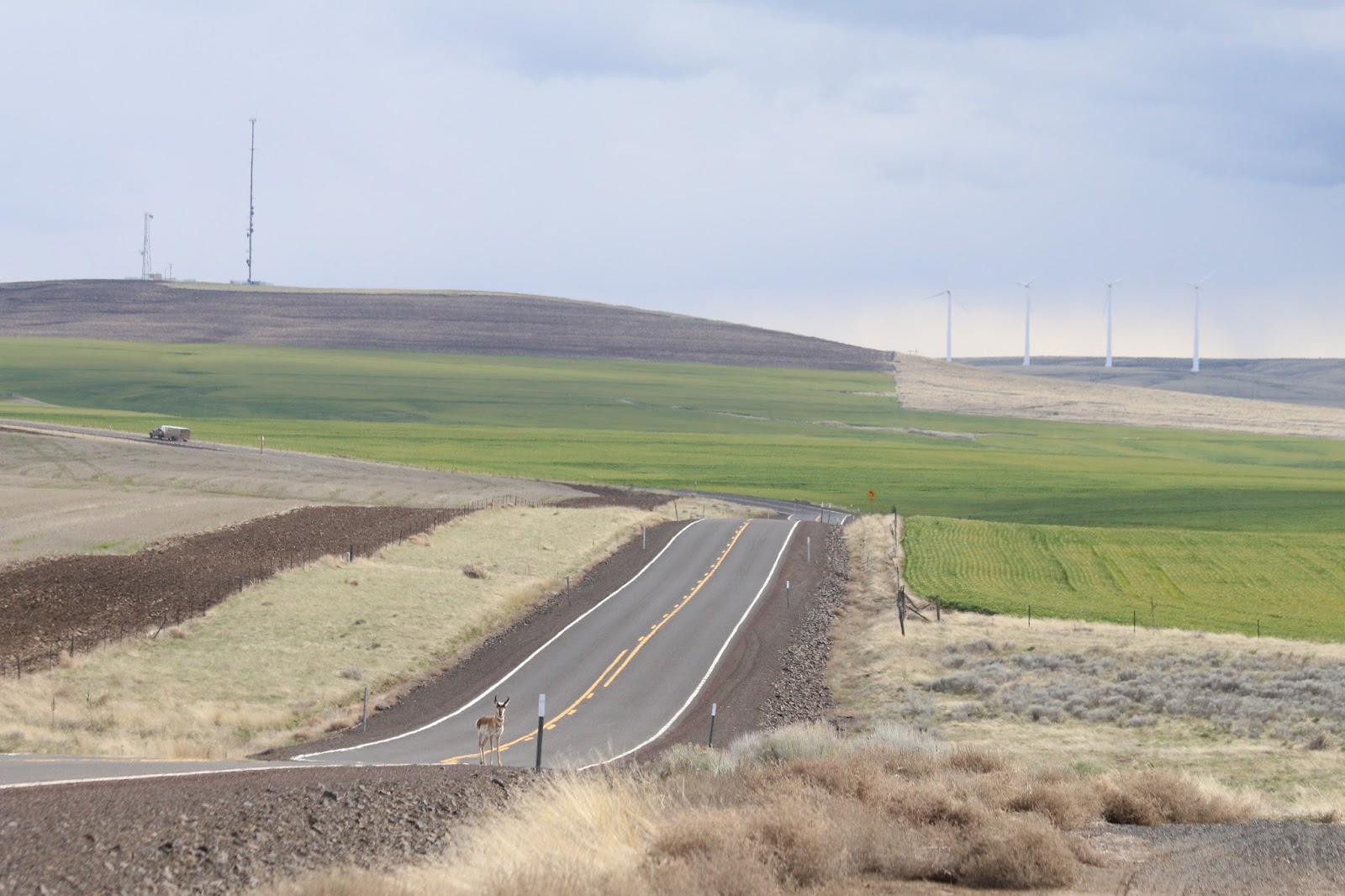 The last birds of Gilliam County appeared in middle of the road farther up on 206, but flew up to the hillside. 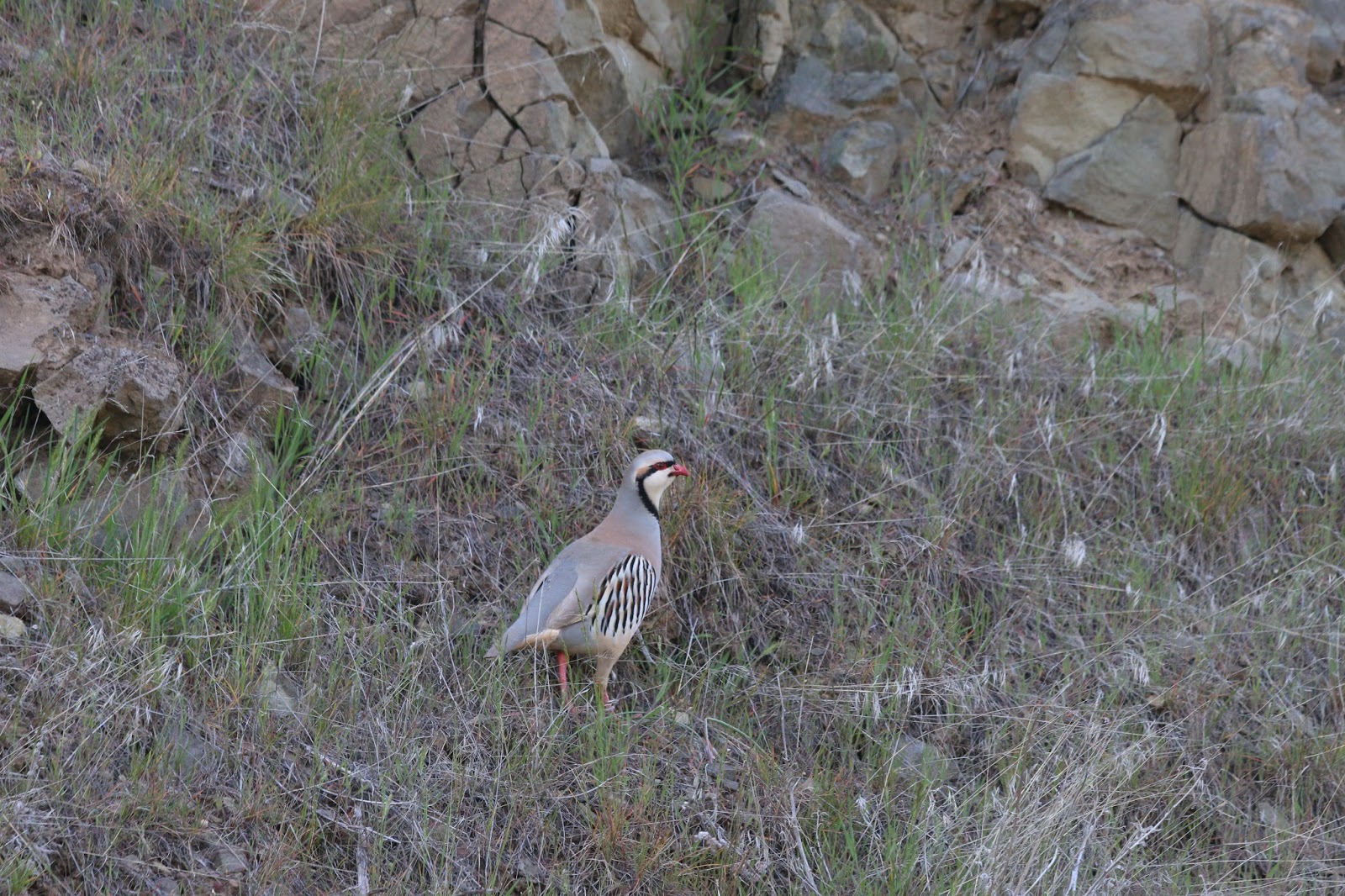 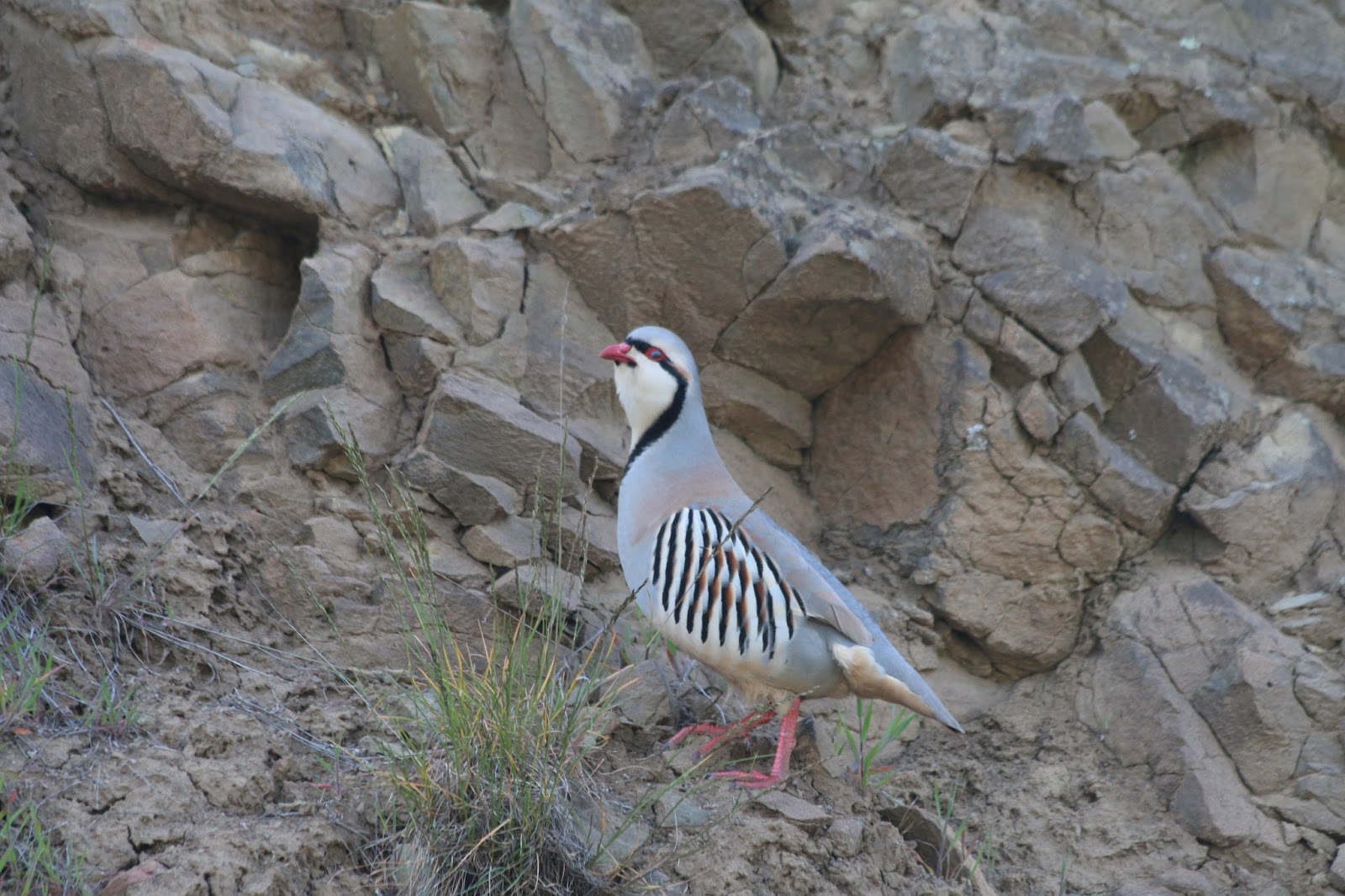 In my three minutes of internet research I have learned that Chukars were first introduced to North America in the late 1800's from India (from this paper).  If loving a non-native this much is wrong, I don't want to be right.