on May 10, 2015
So far May has been good to me.  I picked up two state birds in the first week including the famous Beaverton Blue Grosbeak, aka the dumbest bird most folks have ever met.  The second bird was one I had been trying to meet up with in Oregon for some time now, a bird I had seen in Washington and maybe California:  the Wandering Tattler.

A friend had suggested a trip to Tillamook to look for shorebirds last week, and after reading reports of tattlers at Barview Jetty I agreed. 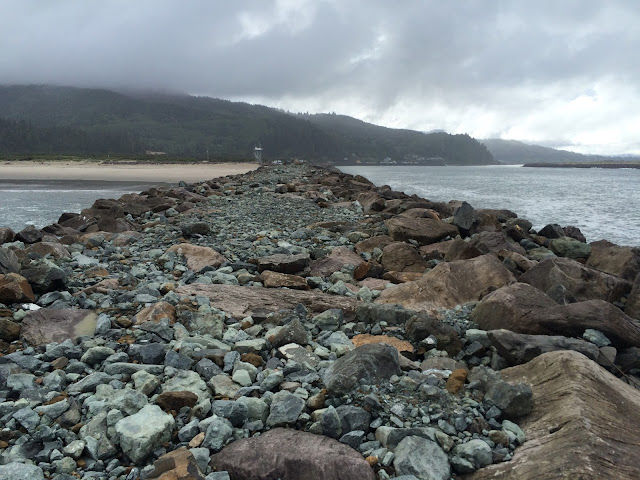 On this particular morning three Wandering Tattlers were poking around the jetty though oddly not a single other rockpiper could be found. 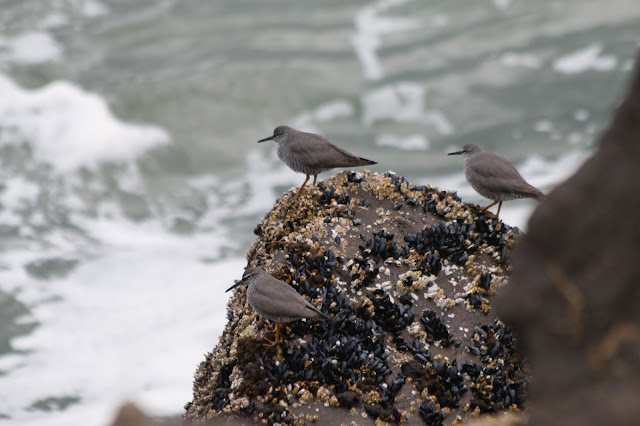 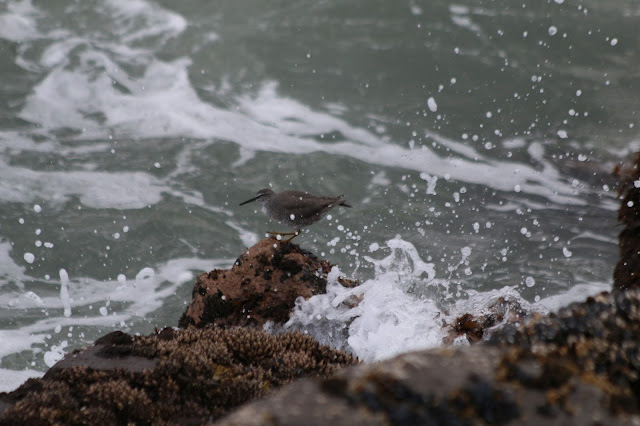 Consulting my 1970's Nat Geo Water, Prey, and Game Birds book (which often offers more colorful descriptions than other books) I now understand its name.  And I quote:  "Its loud whistles tattle a warning to other animals nearby."  Ohhhh.  Like tattletale. 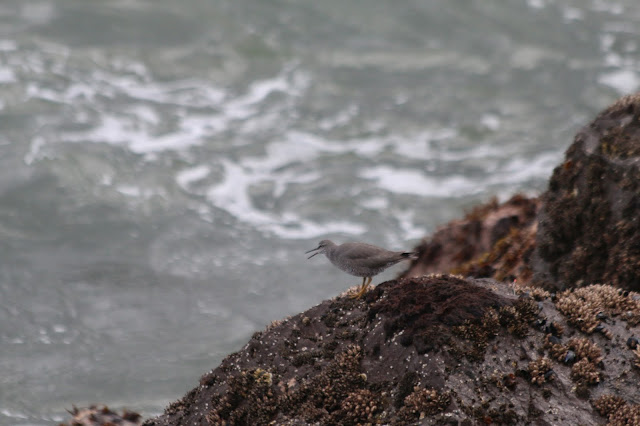 Bad photo of tattling in action.

On the way back from the jetty we stopped by Bay City Oyster Co. where the most interesting thing to me was this bush full of snails.  And by full I mean there were two. 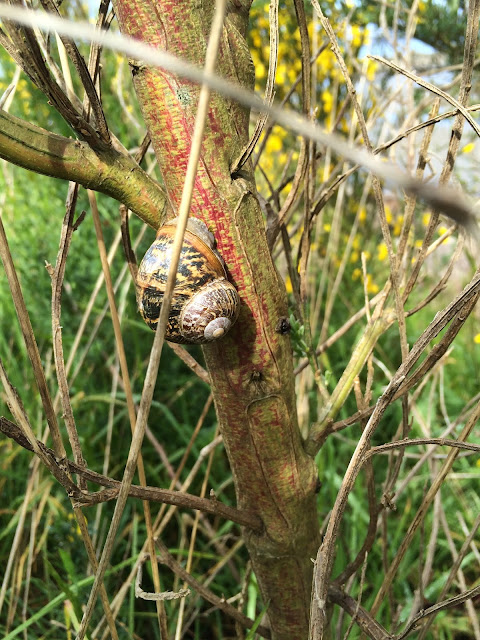 We took a little detour down Goodspeed Road to check for birds and a field of Whimbrels made the side trip worthwhile... 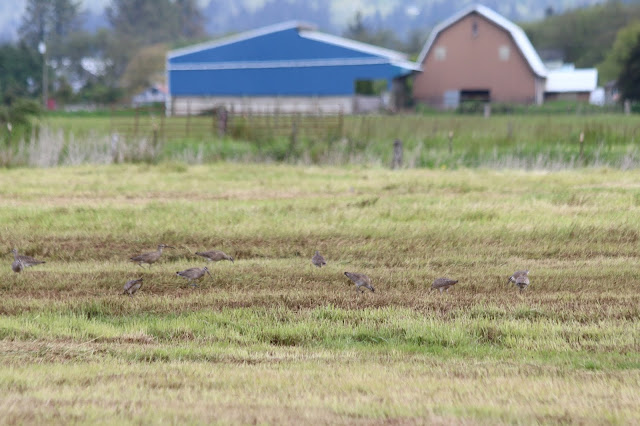 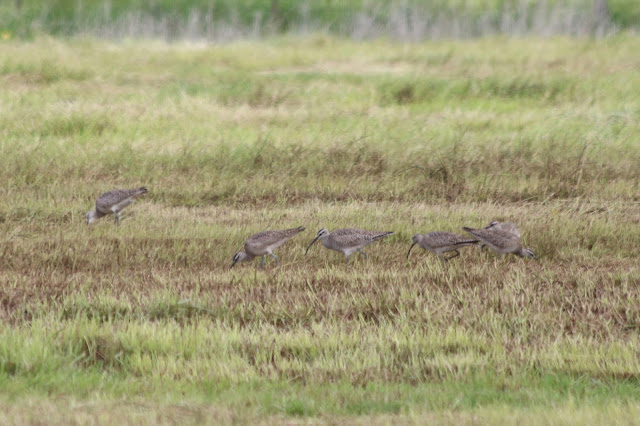 The next stop was Bayocean Spit... 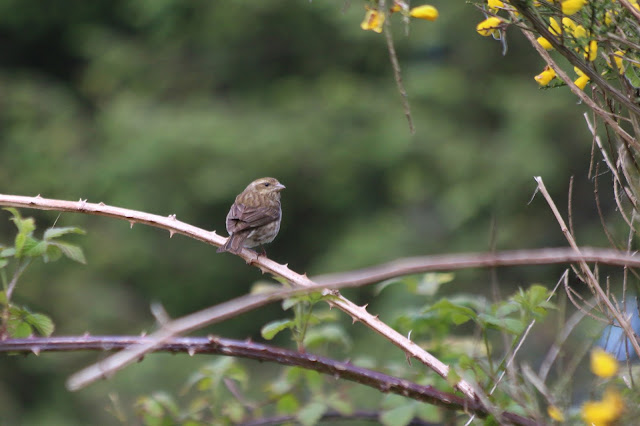 The piles of Velella velella that have blown ashore recently were briefly entertaining... 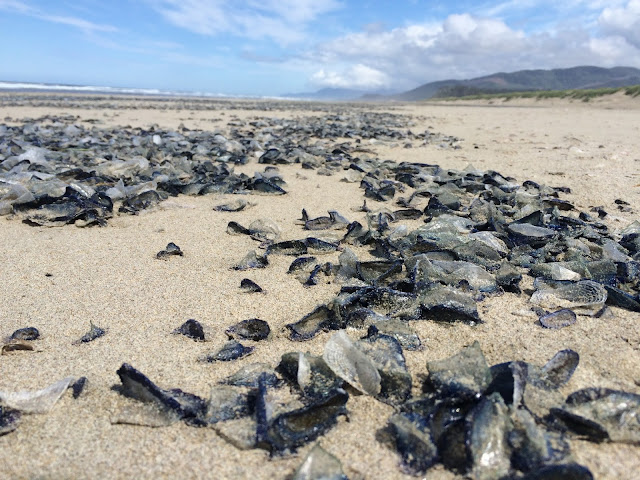 Shorebirds were not easy to come by on this day, but one nice mixed flock cruised by us before landing in some distant piles of Velella velella. 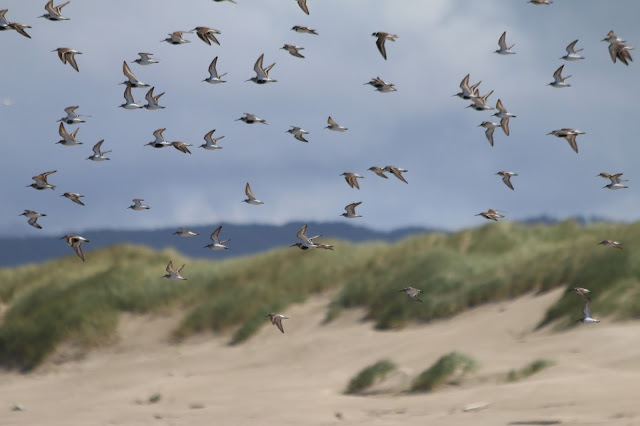 Dunlin, Semipalmated Plovers, and probably Western Sandpipers made up the flock. 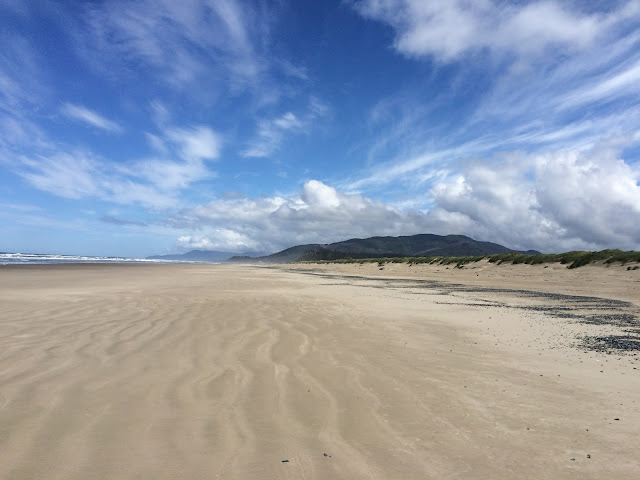 On the bay side of the spit things were fairly tame though a couple of Caspian Terns did the deed in the distance.

While we're talking about the coast, I went out to Cannon Beach last month and nothing ever ended up on this old blog.  Let's fix that. 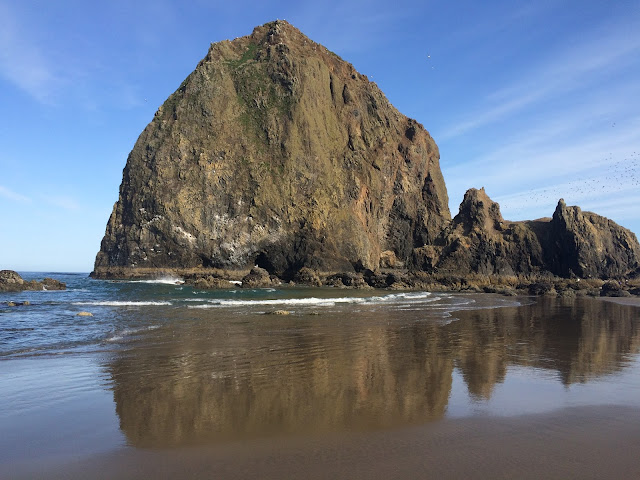 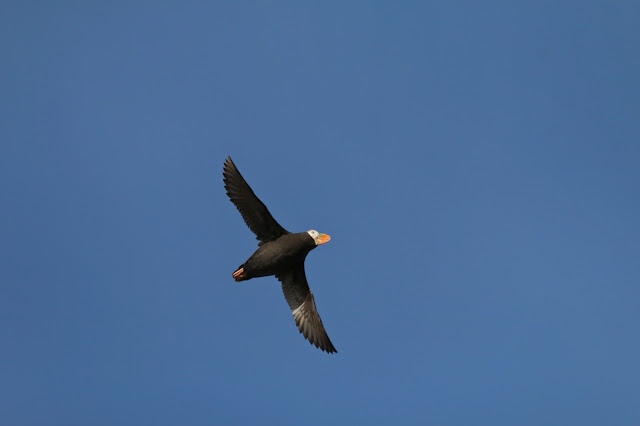 I am so excited to know that this will not be the only kind of puffin I see this year.  Also around the rock were the usual cormorants, murres, guillemots, and Harlequin Ducks... 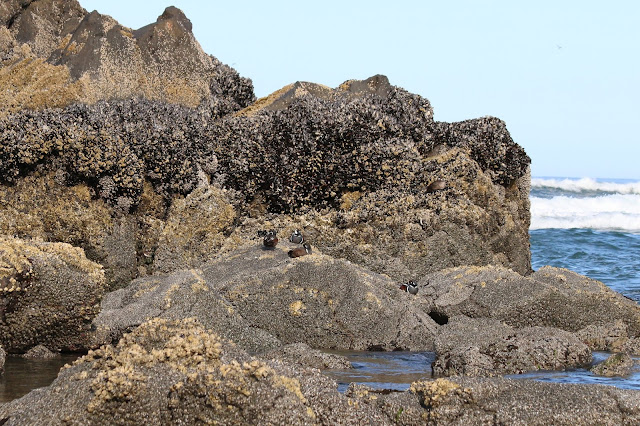 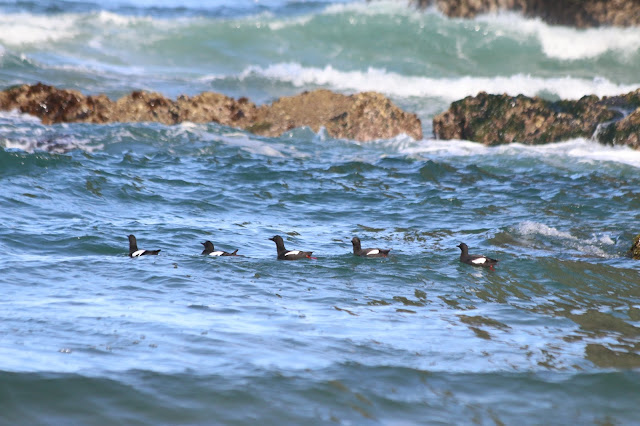 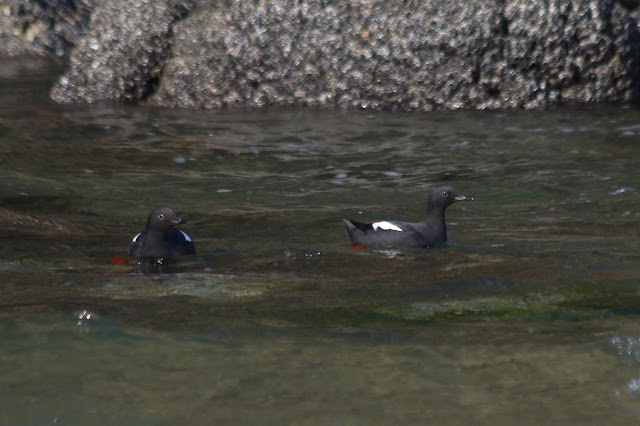 The raft of murres near Haystack was pretty impressive, and even more so when they would form giant swarms. 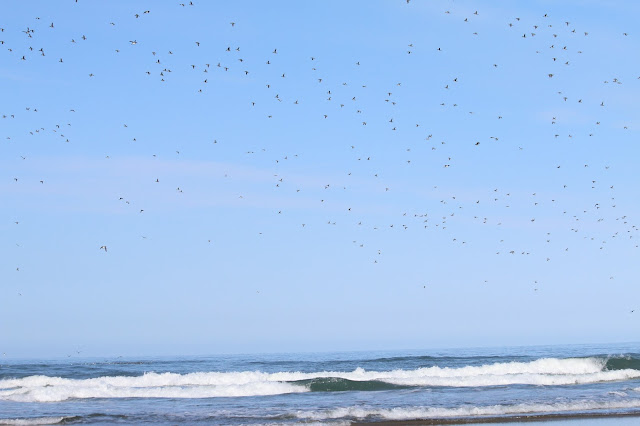 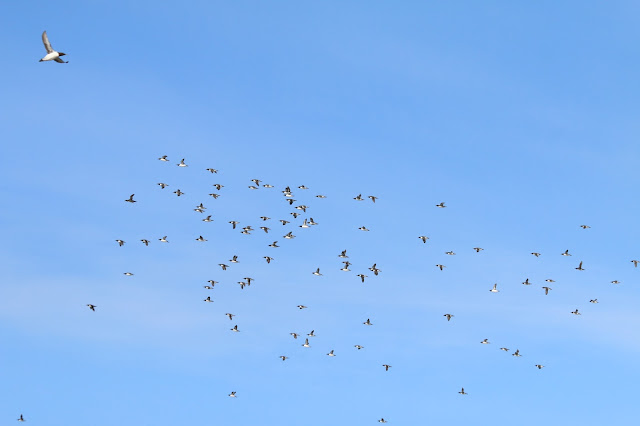 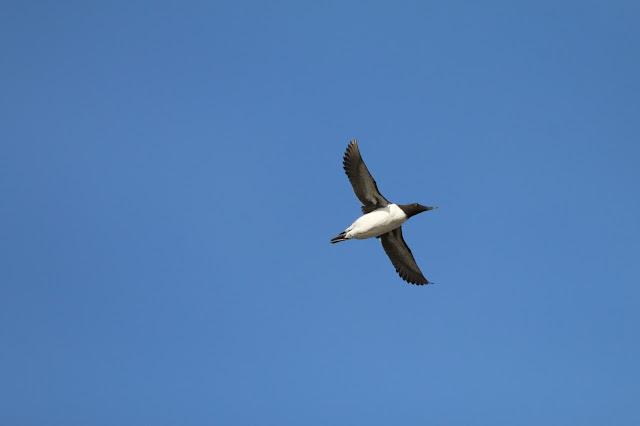 And lastly, this girl was all like LOOK AT THE PIGEON GUILLEMOT!  LOOK! 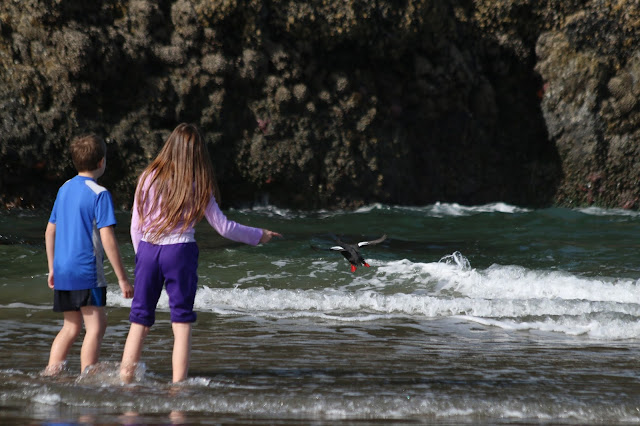 Lies.  All lies.  I was just following the guillemot and these kids got in the way. 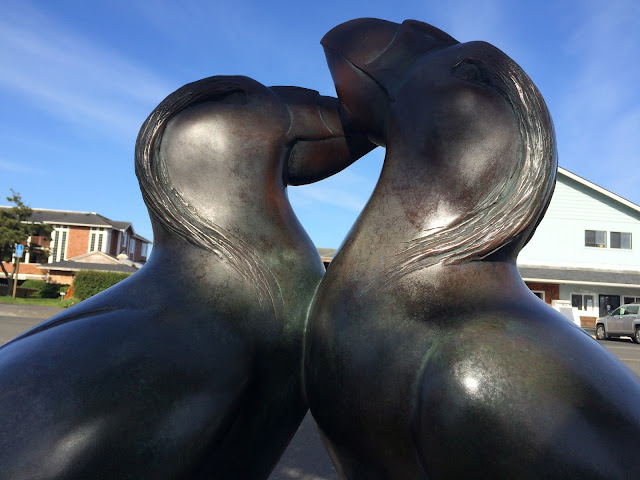