on July 26, 2015
All I want to do these days is poke around the yard looking for bugs.  You might remember me dusting off my macro lens a couple weeks ago to photograph some bees in my bird bath.  Well, it's become a bit of an obsession since then.  If you hate looking at bugs you might want to skip this blog for the next couple of months...

I think this is a Carolina Grasshopper, found while digging out a mass of skimmia roots, holly tree roots, and blackberry roots: 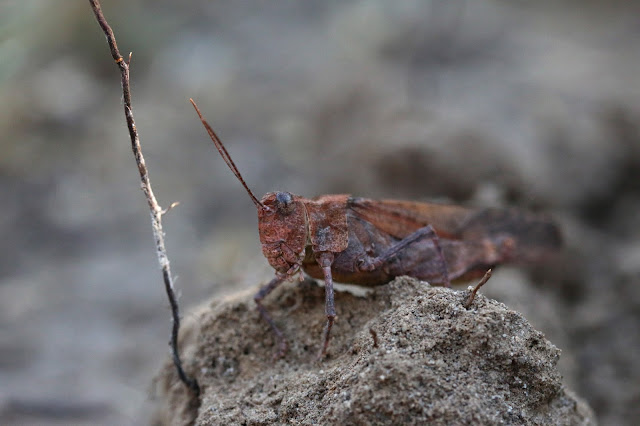 While belly-crawling around trying to get a good photo I found a second variety of grasshopper under my rhododendron: 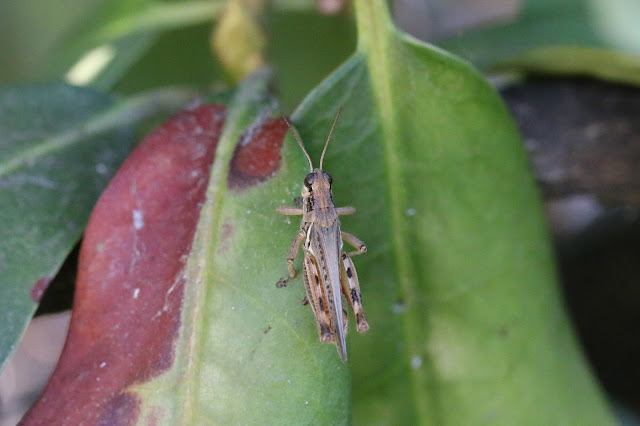 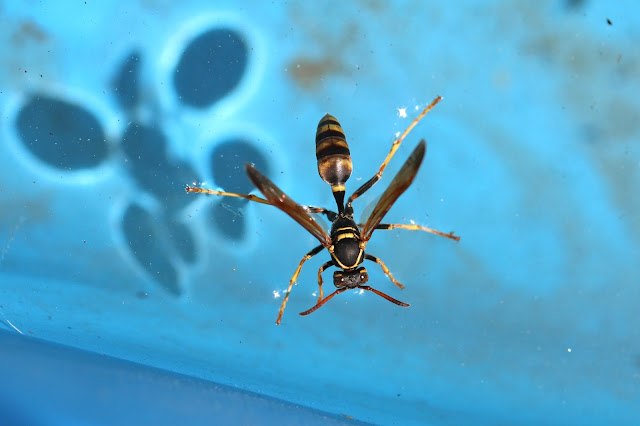 This and several other bugs identified thanks to BugGuide.net

My sunchokes are great places to find bugs, like this Fuller Rose Beetle: 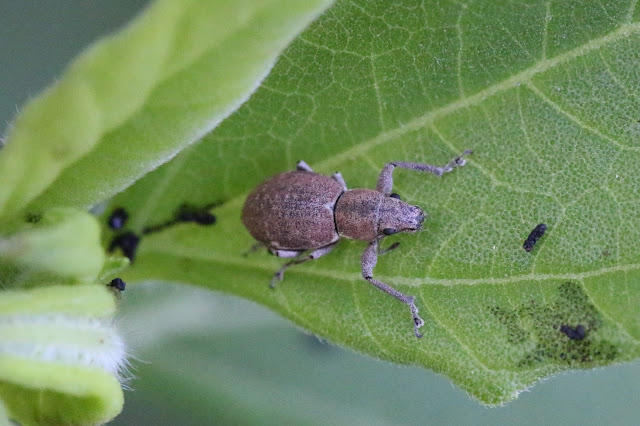 So far it seems like many bugs I have found are actually huge pests, including the above one.  At least they look cool!  This next one was only first recorded in Oregon in 2002: 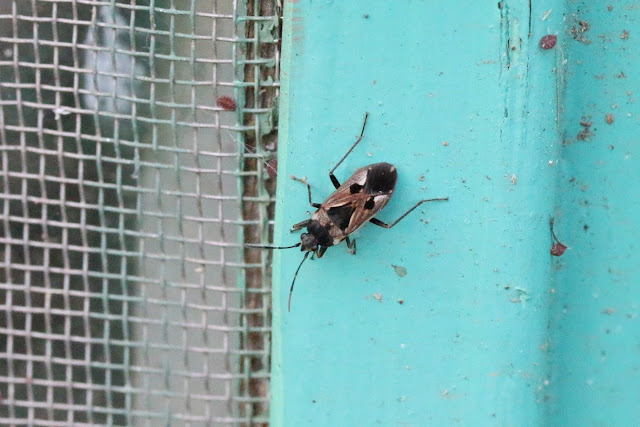 Known unofficially as Tuxedo Bugs, these guys came over from Europe, Africa, and/or Asia.  They're considered invasive and will get into your house and, well, invade.  A University of Idaho paper on them states this: "Although tuxedo bugs essentially are harmless, sheer numbers make them an intolerable pest."

A few days ago Ralph caught an insect for me, a Common Whitetail dragonfly.  Unfortunately Ralph broke one of its wings rendering it flightless and after watching it flop around I decided the most humane action was to kill it. 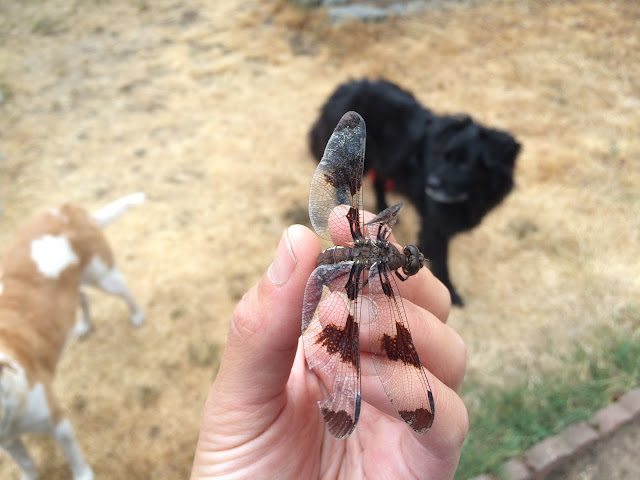 On the backside of my house I can often find one these bugs, a Green Lacewing: 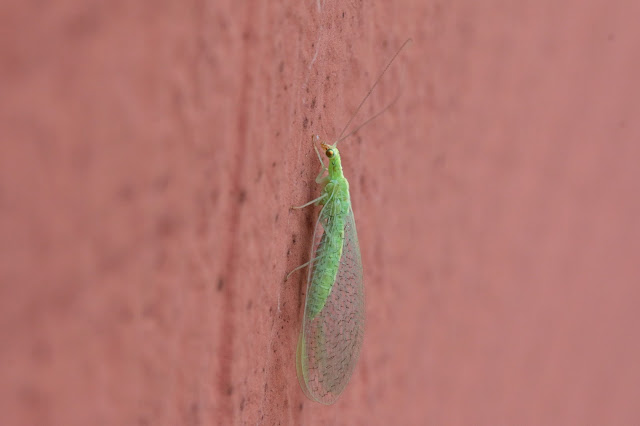 They're not only awesome-looking but can also help control aphids!  Win win. 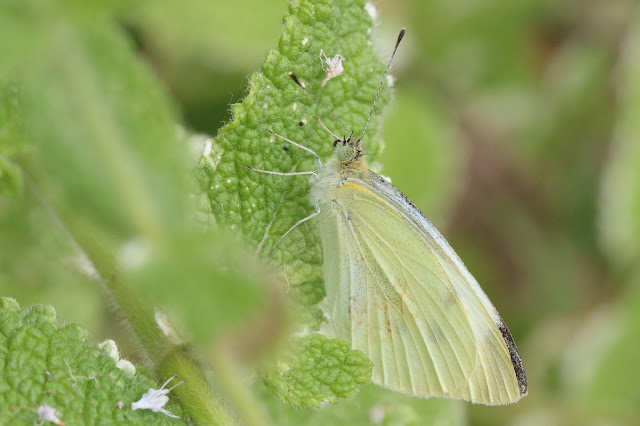 My mint attracts tons and tons of bees, but also little butterflies like the one above.  Cabbage white perhaps?  I also finally got close to a Gray Hairstreak: 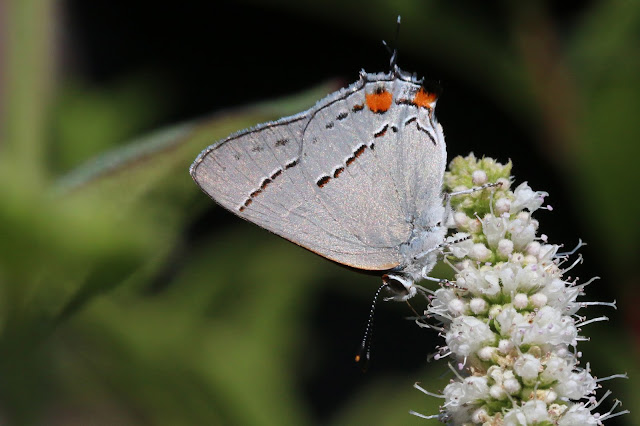 Last year I first noticed sweat bees in the yard on my sunflowers and this year I have found one resting on a sunchoke leaf, and later in a flowering artichoke: 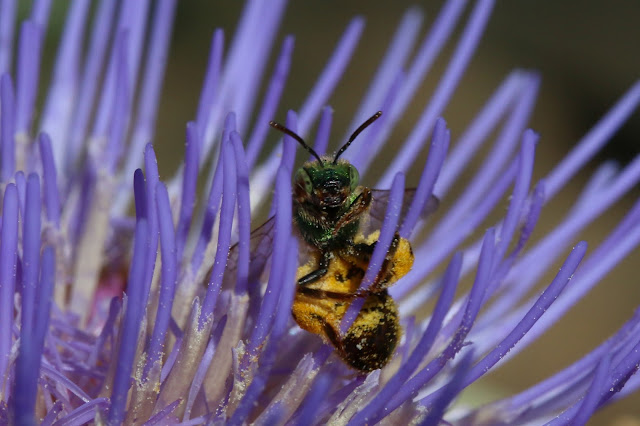 My compost bin has its own varieties of bugs inside, like this Black Soldier Fly: 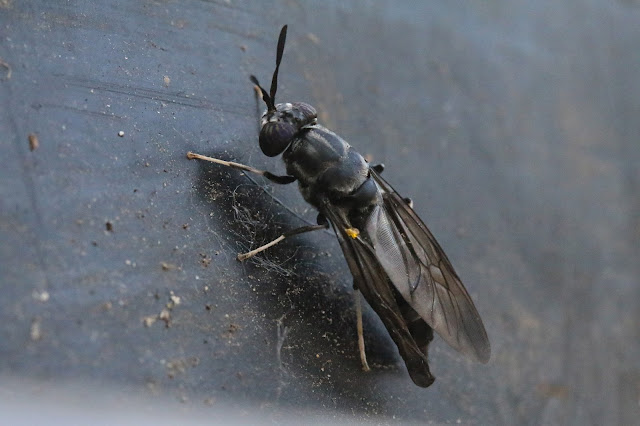 These guys look kind of imposing but they don't sting and are fantastic for composting.  They share the bin with lots of meal moths, many of which perish in spiderwebs. 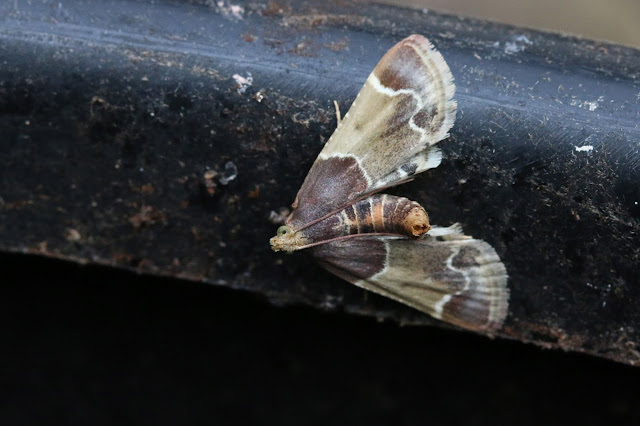 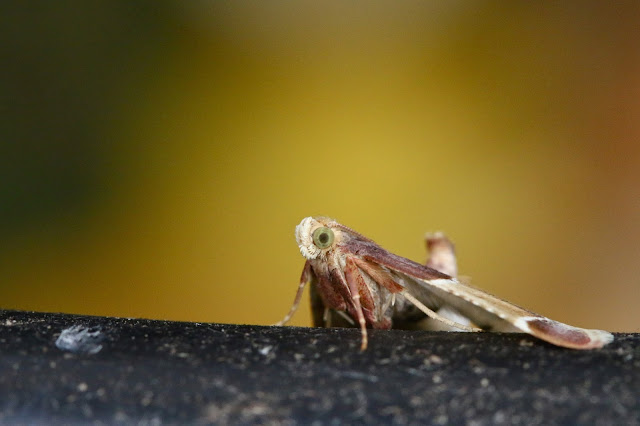 Sick of bugs yet?  No?  Good, because I have a few more insects from outside the yard to share.  From a failed shorebird-hunt at Ankeny NWR last week: 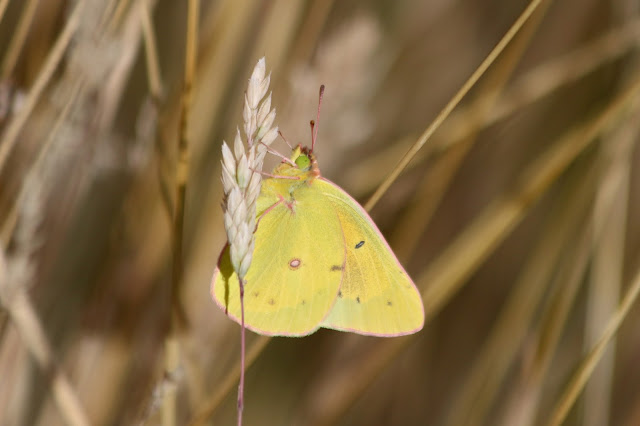 Without getting a close-up look at this Clouded Sulphur I would not have noticed the sweet pink antennae and lime green eyes.  I caught a few in-flight shots too: 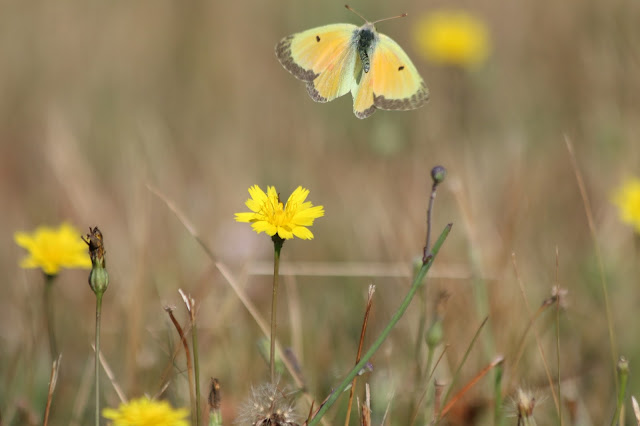 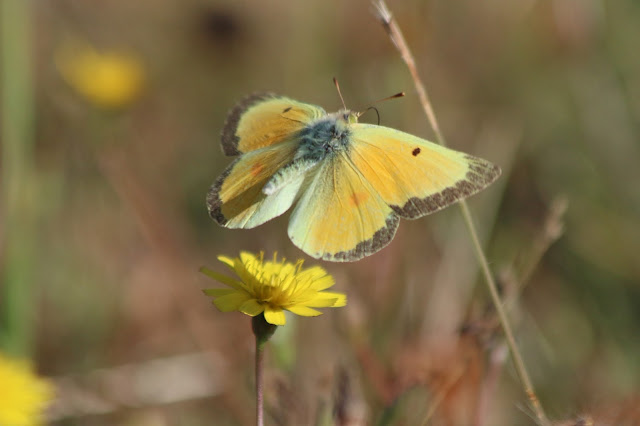 Earlier in the morning I followed a Lorquin's Admiral along the path by Pintail Marsh: 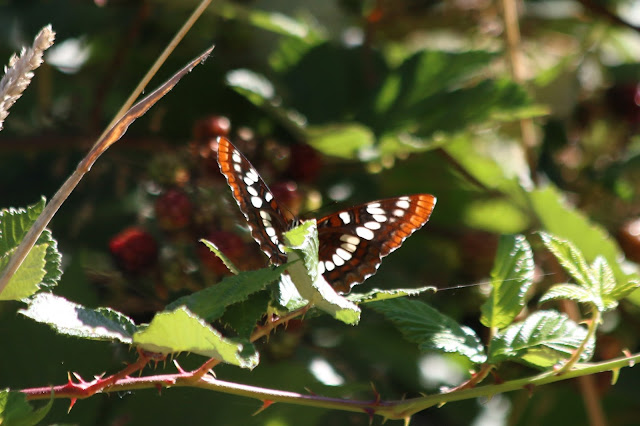 Dragonflies are plentiful at Ankeny, though few sit for photos... 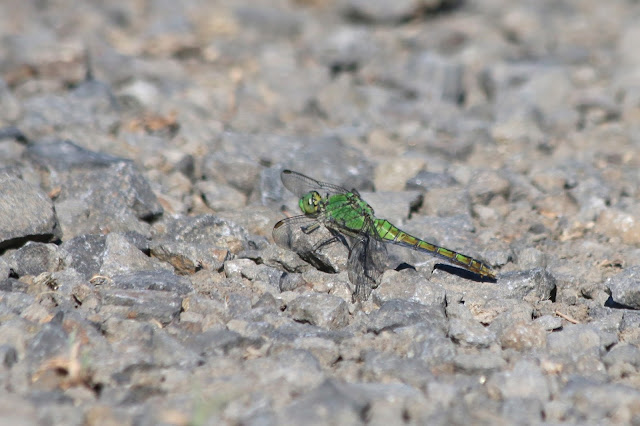 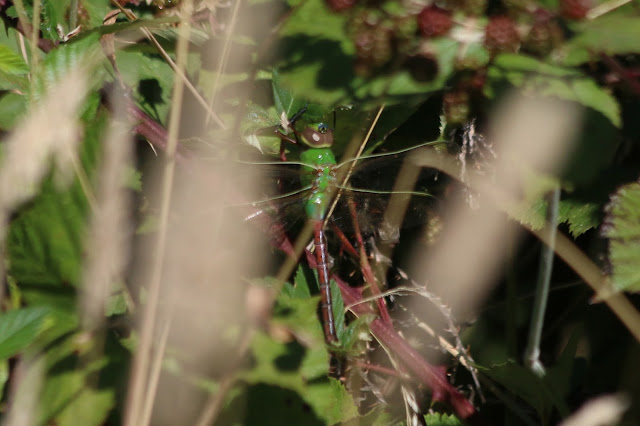 Okay, one last insect for you, an unidentified damsefly along the Columbia Slough eating some other winged insect: 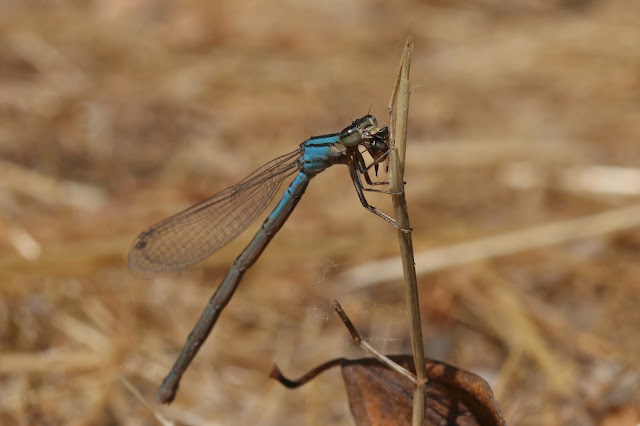