on September 24, 2015
The weather has been so much better since I returned from Boston so birding has been a lot more appealing.  Let's dive right in.

Last week I went to watch the Vaux's Swifts at the Chapman School do their thing; roughly 4500 went down the chimney that night according to Andy Frank. 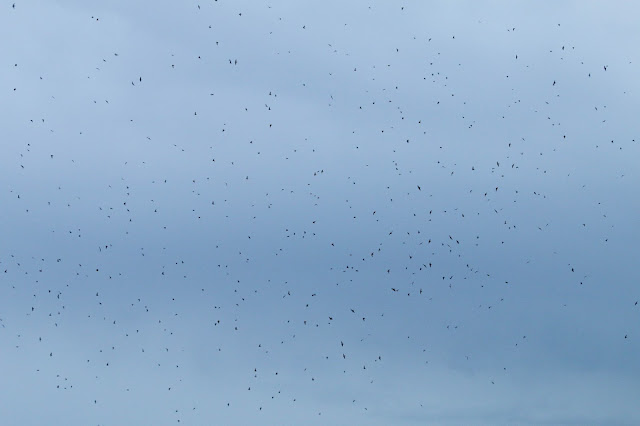 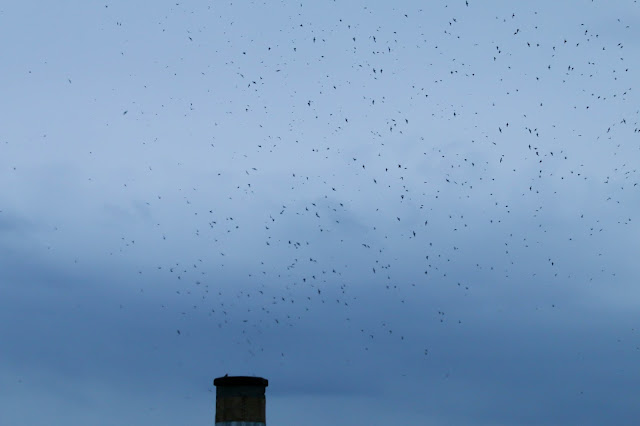 With Cooper's Hawk on the chimney

A quick stop at Broughton Beach would have been completely lame without this lone Sanderling eating a dead fish. 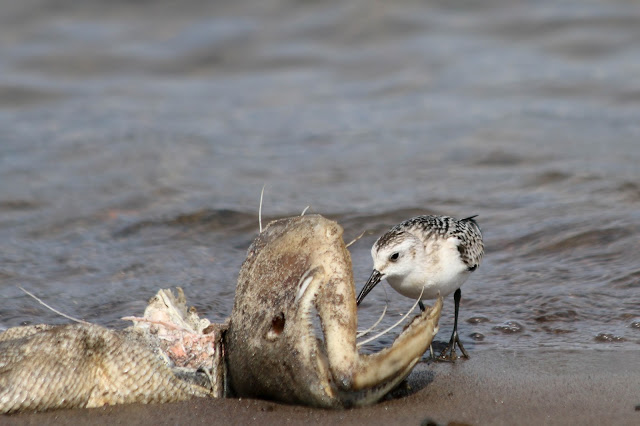 I took the mutts out to Sauvie Island one day to walk out to the Narrows where birding was decent, but the photo ops not so much.  The mutts tried to make up for it. 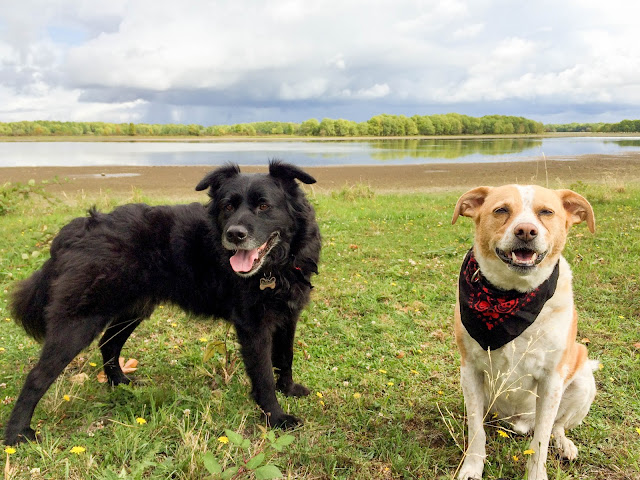 The sunflower fields by the Reeder Road viewpoint thing are looking rad. 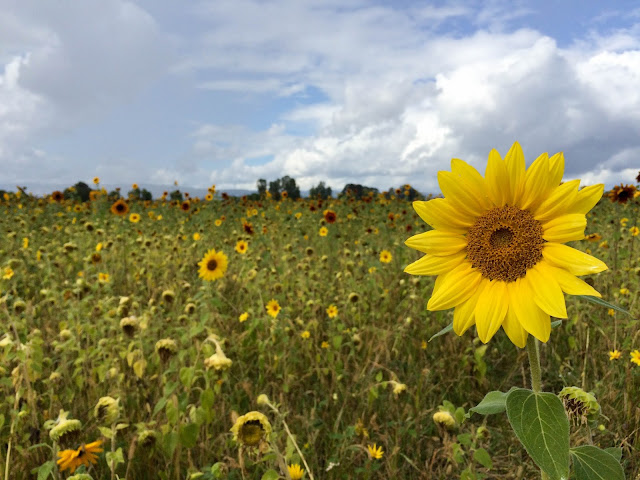 Yard birding has been picking up again.  I bought a thistle feeder and put fine sunflower chips in it instead of thistle and the goldfinches go nuts over it.  Seriously. 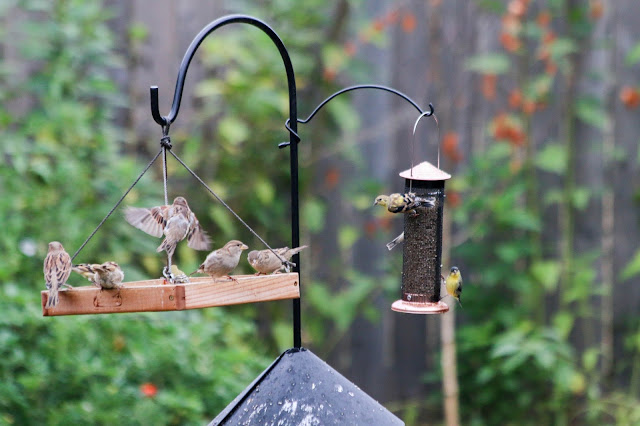 So now when the House Sparrows that moved into my camellia clog up the tray feeder the finches still have somewhere to feed.  Elsewhere in the yard, the hummingbird feeder ant moat continues to be many birds' favorite watering hole. 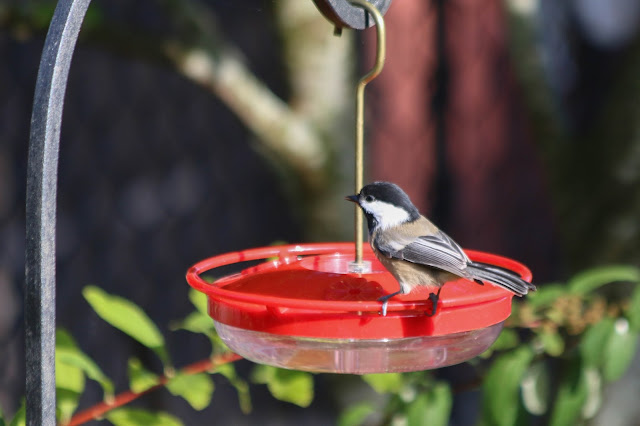 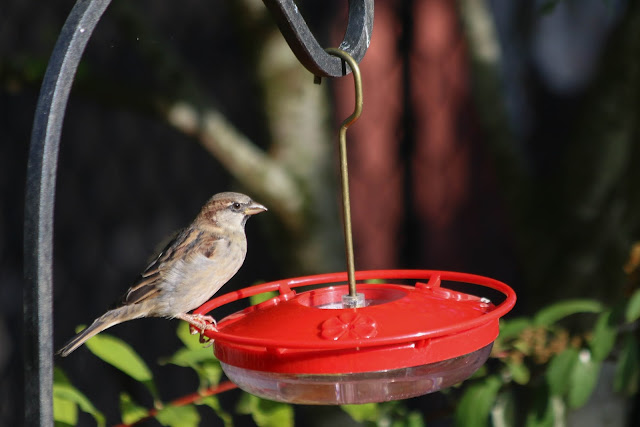 I was super excited the other day when I noticed a Purple Finch in the camellia... 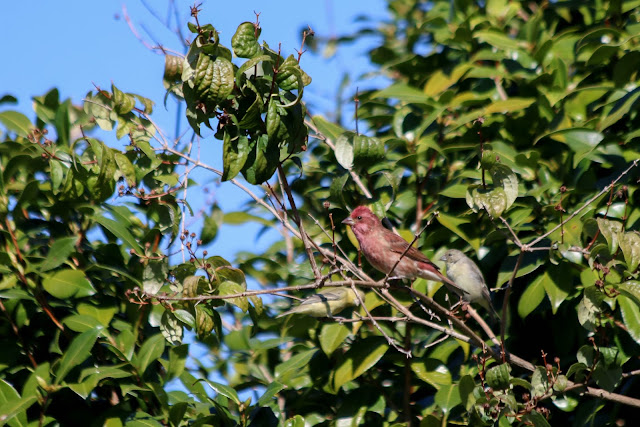 I probably won't see another in the yard till April.

On Monday I decided to drive down to Fern Ridge Reservoir in hopes of seeing some shorebirds.  The weather was somewhat unpleasant with a steady wind and a misty rainy thing happening for much of the time, but there were birds.  And crawdads. 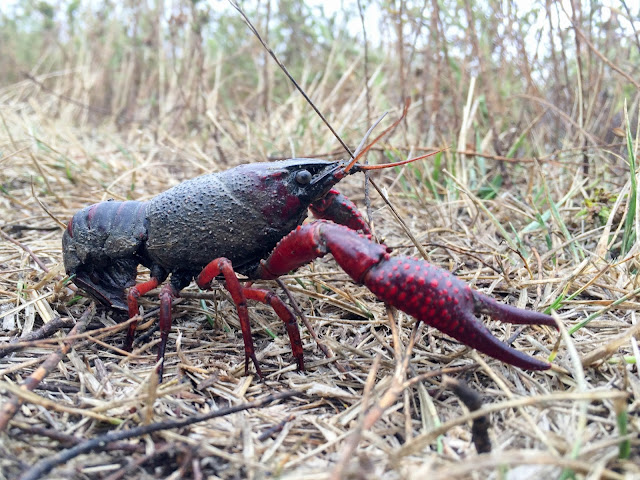 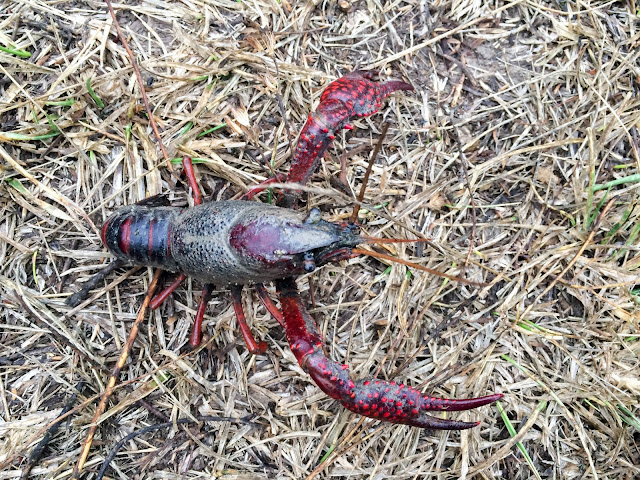 This morning happened to be the day all of the Greater White-fronted Geese in the world decided to migrate, or so it seemed.  They were flying overhead nonstop, in dozens and hundreds, many coming to rest at the edge of the reservoir. 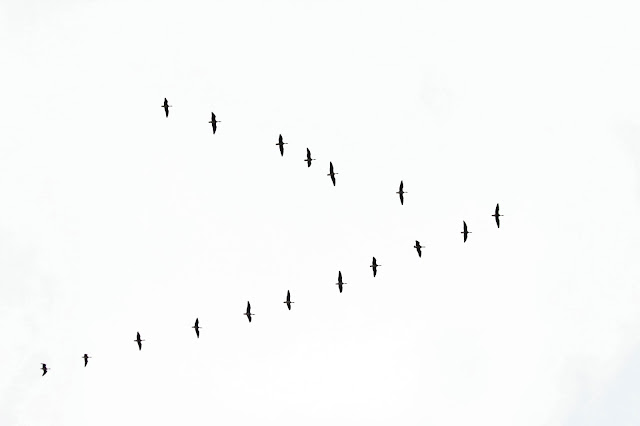 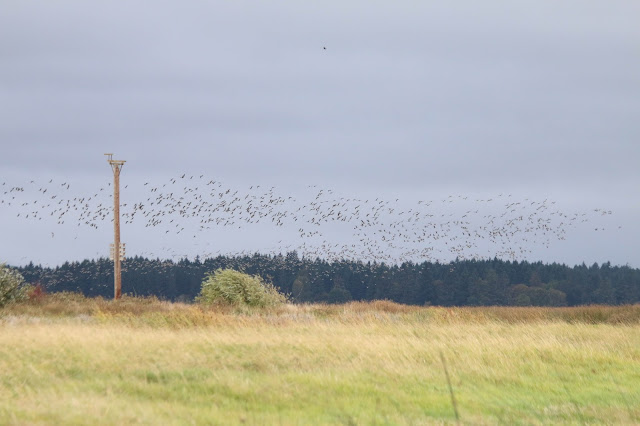 The mudflats were packed with dowitchers, yellowlegs, and four Pectoral Sandpipers. 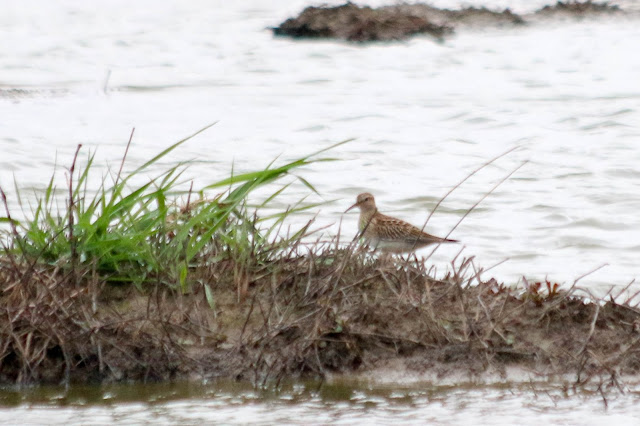 I recently had the chance to bird with one of my long-time blog friends, Sondra, who is on a wild road trip all the way from South Carolina.  We had fun driving the Ridgefield auto tour, while her sweet rescue pup Casey snoozed in the backseat. 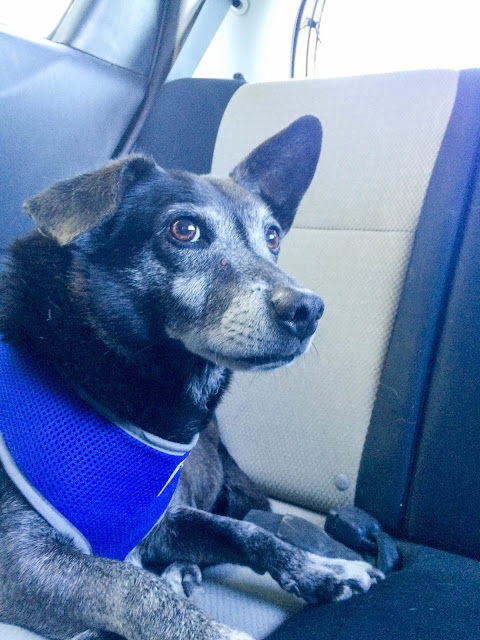 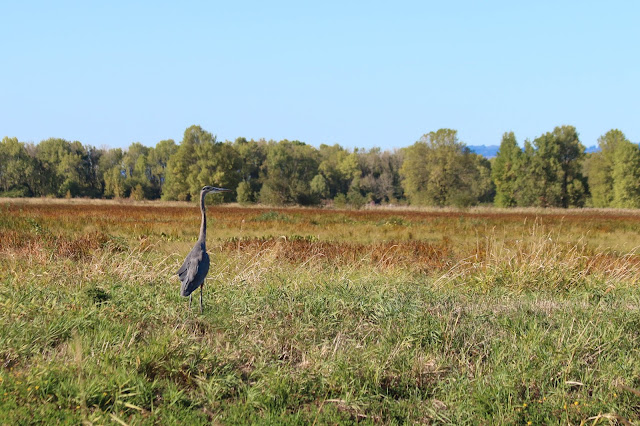 She still has lots more to see on her trip but you should check out some of her recent posts, she's been exploring all over!

Yesterday I took the mutts out to Fort Stevens after dipping on the Sharp-tailed Sandpiper in Astoria.  Of course it was seen later in the day after I was gone.  But that's okay because at the South Jetty the Sooty Shearwater spectacle is continuing! 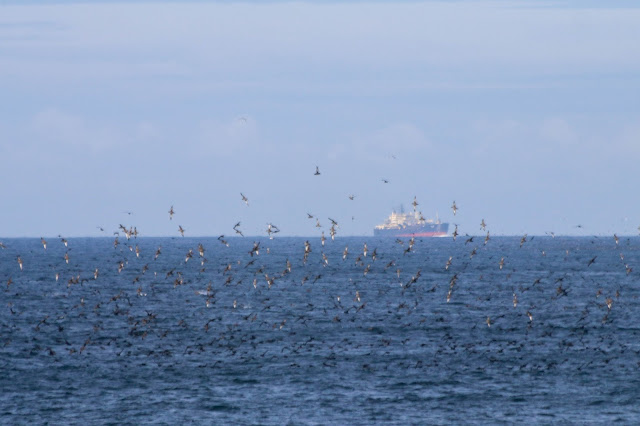 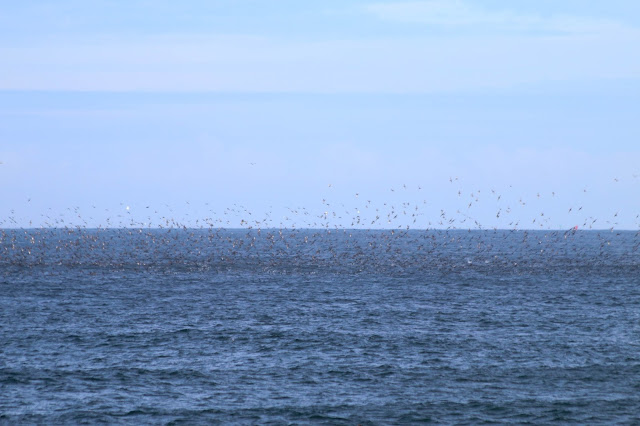 I didn't see any whales on my trip but the day before there were reports of Humpbacks in the Columbia River.   So wild.  At times random shearwaters were flying down the river side of the jetty which was so strange to see. 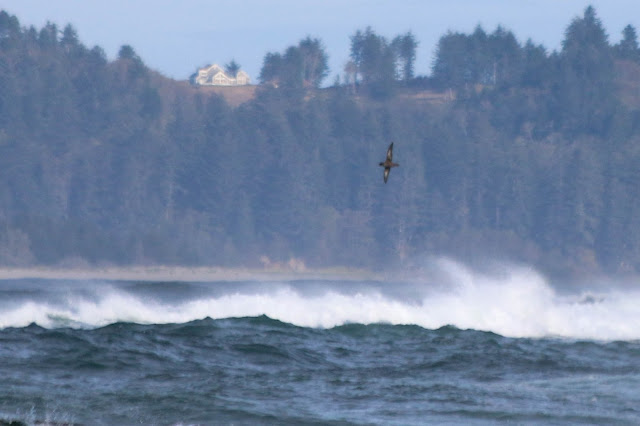 I stopped by Seaside Cove where Surfbirds were almost outnumbering Black Turnstones, and Western Gulls were eating Heermann's Gulls. 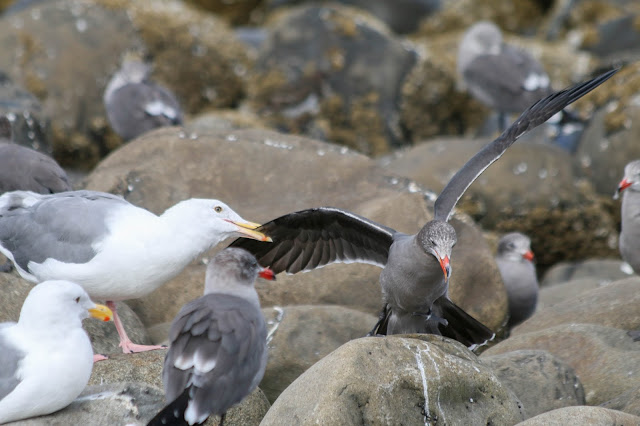 Last night I stopped by Broughton Beach where I failed to see any Common Terns or American Avocets.  Instead a foursome of Horned Larks were my entertainment. 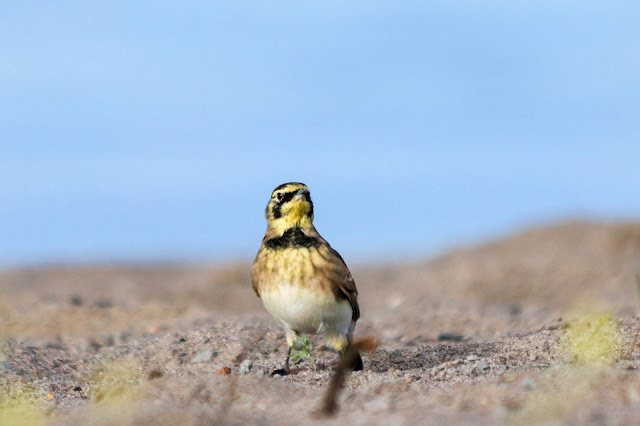 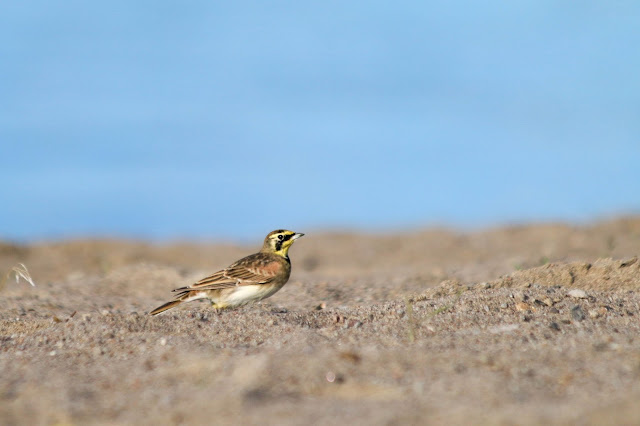 And lastly, a Mallard. 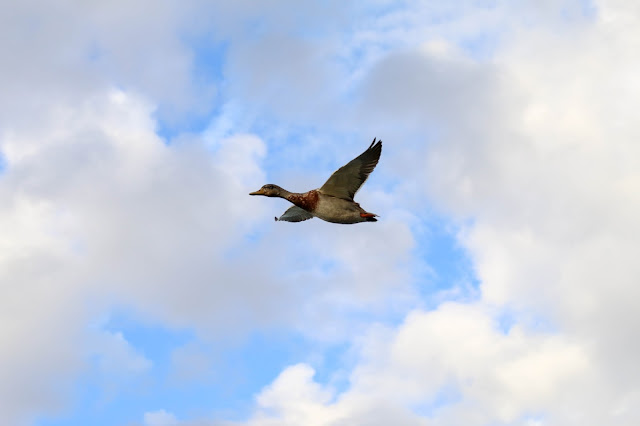