on December 27, 2015
Where better to spend the holidays than the middle of nowhere?  My friend and I headed out to Gilliam County a couple days before Christmas so I could complete my second raptor survey there, and to do some general exploring and scenery-enjoying.  One of our first stops was for a dead Great Horned Owl in Sherman County: 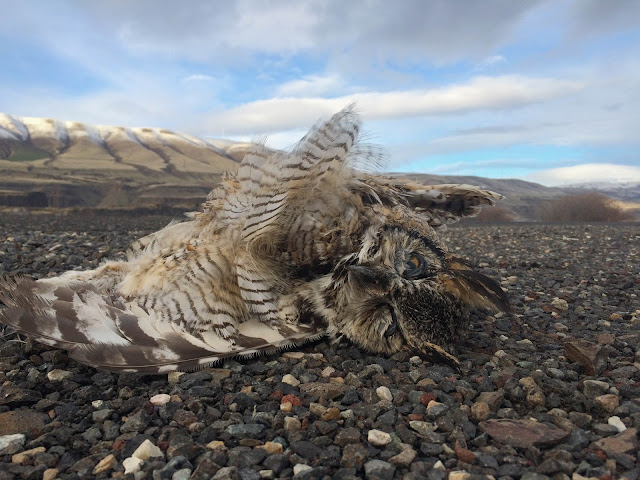 We drove down 206 as the near-full moon rose and the sun was setting, making it to Condon a little before 5. 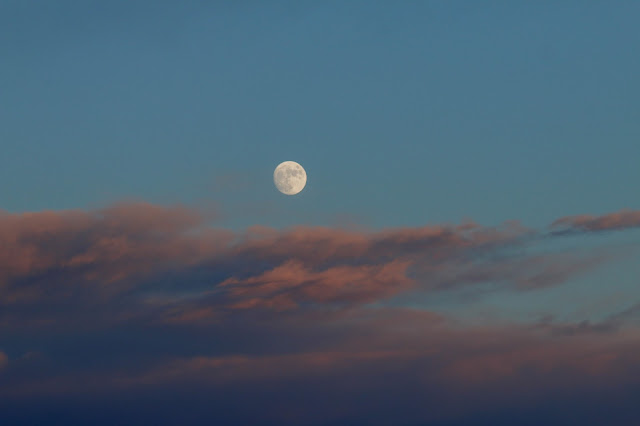 We pulled in to the snowy parking lot of the Condon Motel, one of two options in town; the other being the historic Hotel Condon which does not allow pets.  A sign on the door said "Back at:" with a picture of a clock that read 5:15.  So we sat in the truck waiting till the fellow came back, watching Roxy the rottie poke her head through the blinds of the main building checking for her people.

The next morning we packed up and began our long day of counting raptors. 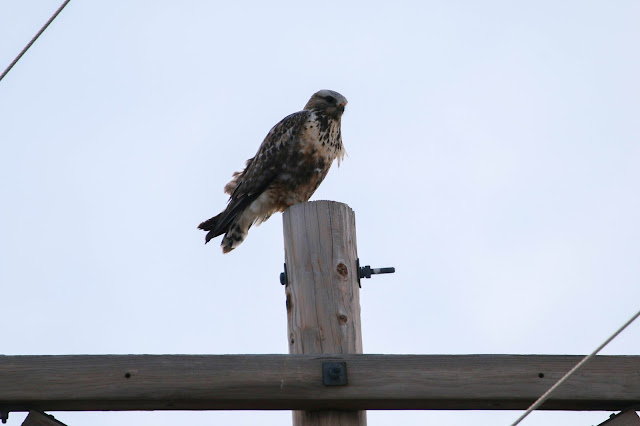 The raptor of choice, the Rough-legged Hawk 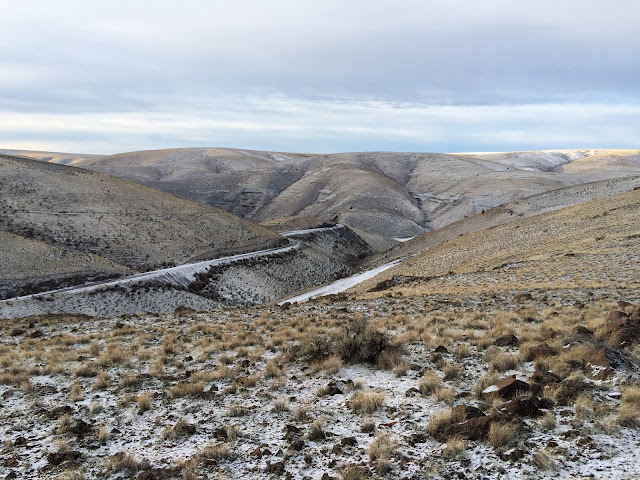 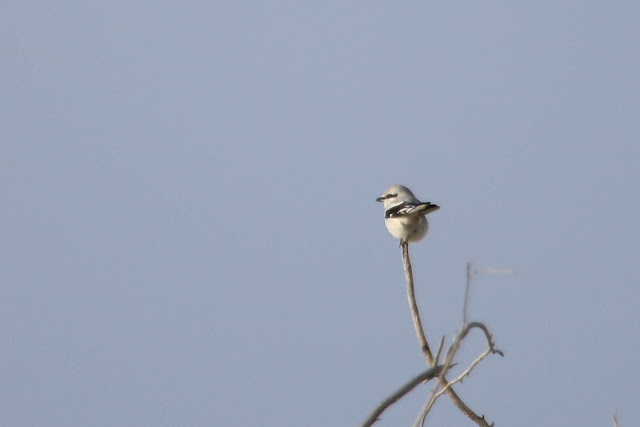 Hale Ridge Road has a cluster of abandoned structures that were fun to explore.  So much rodent poop.  So much. 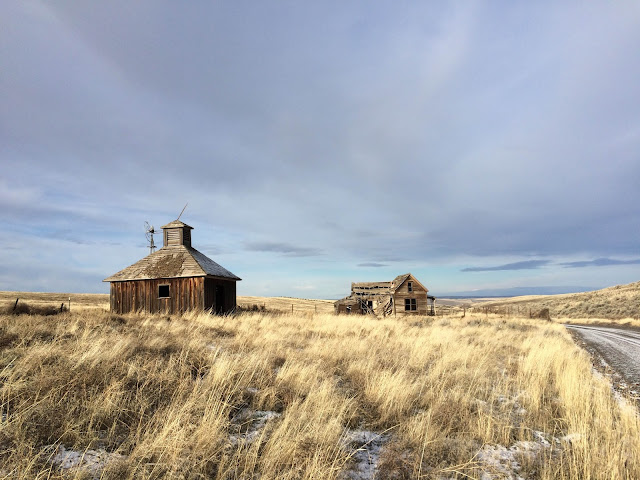 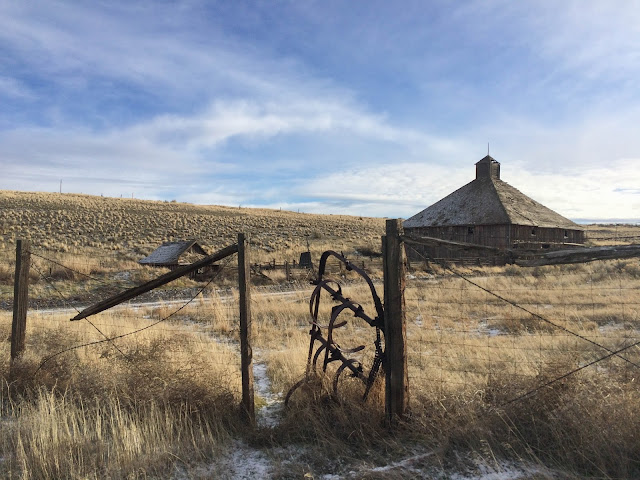 A kestrel was in charge of the area. 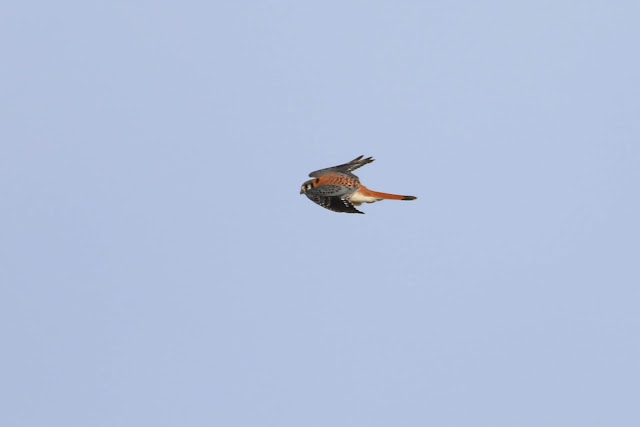 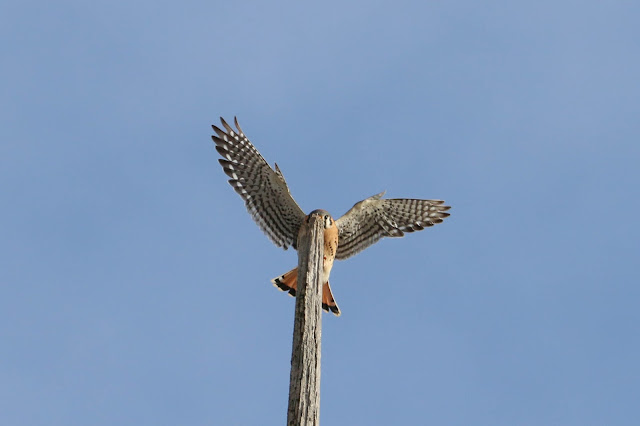 Buttermilk Canyon Road is lovely but was unfortunately raptor-free.  We stopped at a stand of junipers and found a Townsend's Solitaire not far from another shrike. 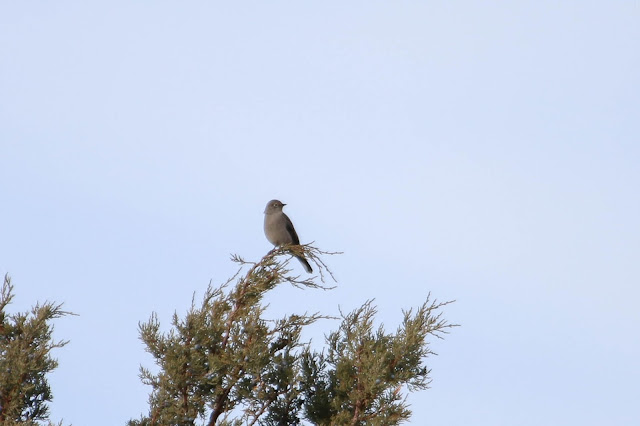 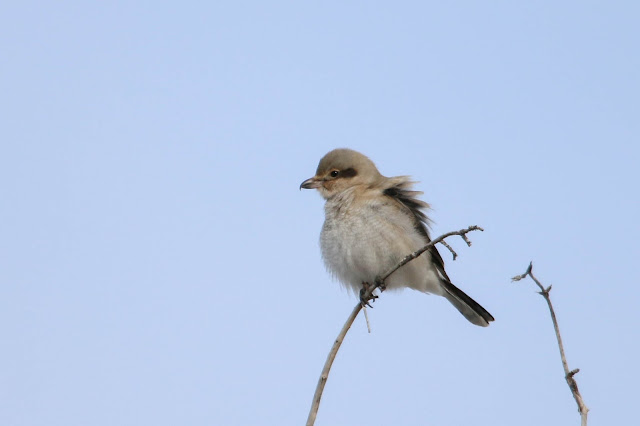 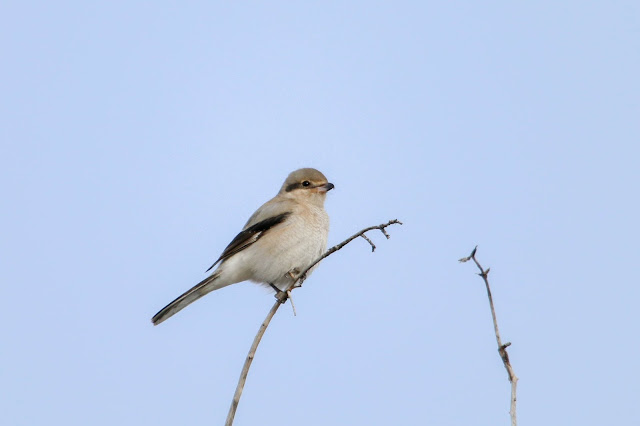 The most confiding Northern Shrike I've ever met. 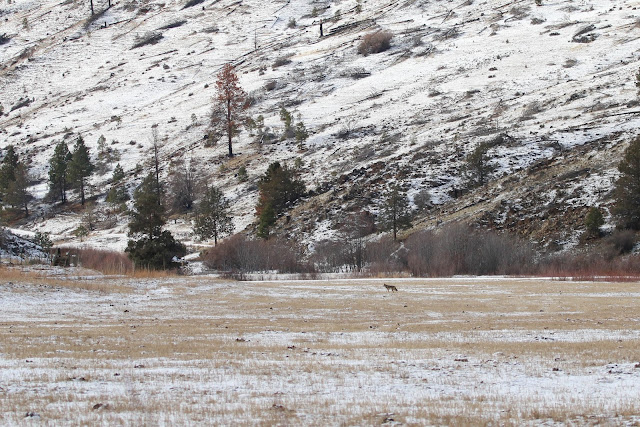 The views as you drive up and out of Lone Rock are stunning, consolation when you miss the rosy-finches seen there the week before. 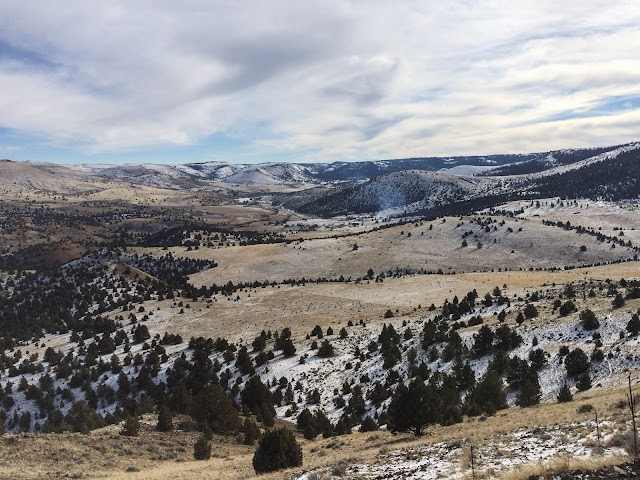 We stopped at a snow-covered viewpoint and the dogs enjoyed one of their favorite snacks.  It was the good stuff, a nice crust of icy snow with a fresh powder coating. 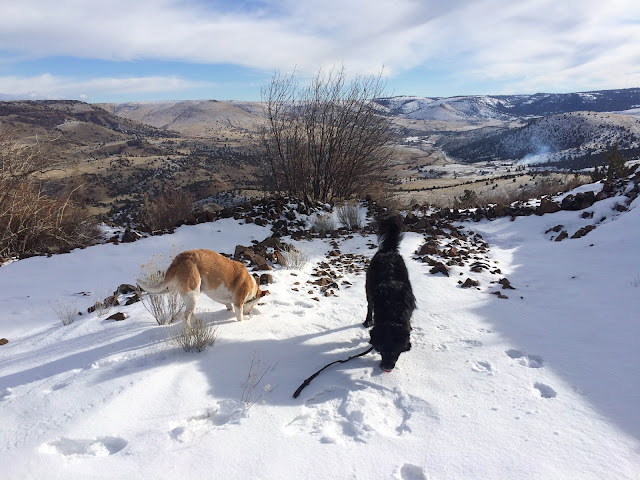 Ramsey Canyon Road proved to be the most raptory road we traveled with several harriers, a kestrel, a Red-tailed, and four or five Rough-legged Hawks. 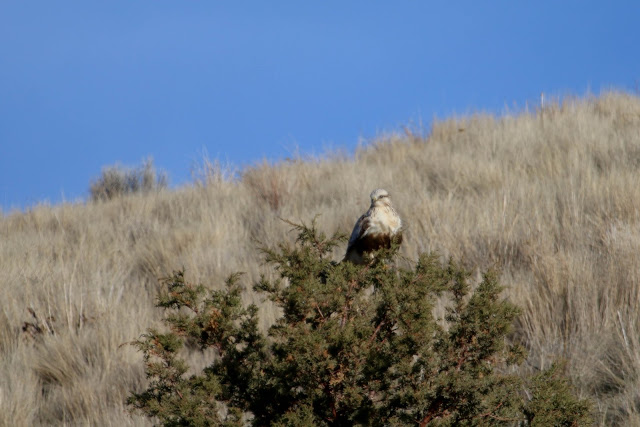 Meadowlarks are always around.  Yup. 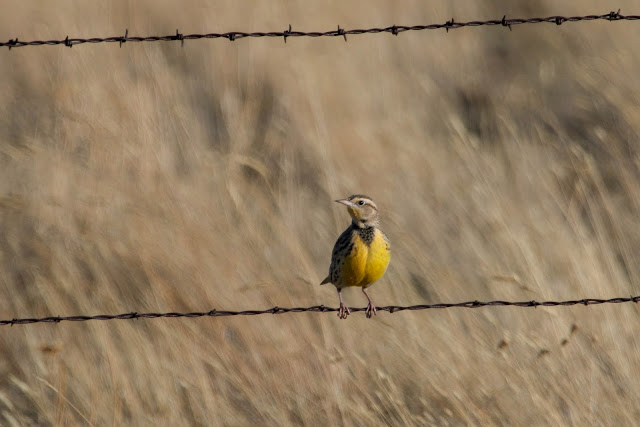 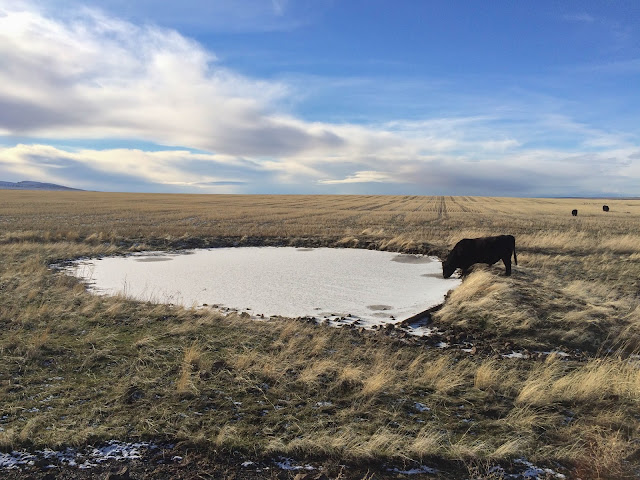 Drinking from the hole in the ice.

In Mayville a little California Quail lady lurked in the grass and I got my 99th Gilliam County bird, a Downy Woodpecker.  The quail was cuter: 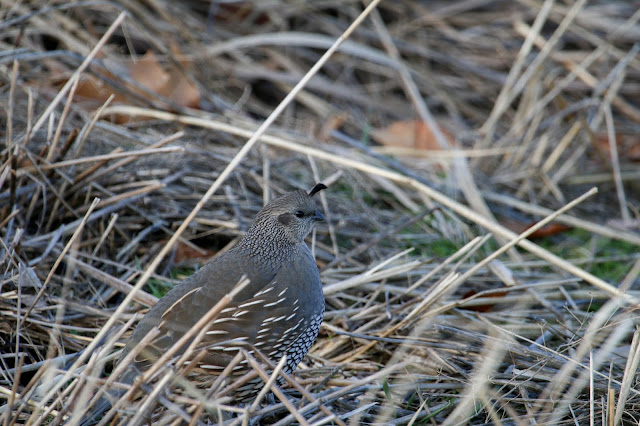 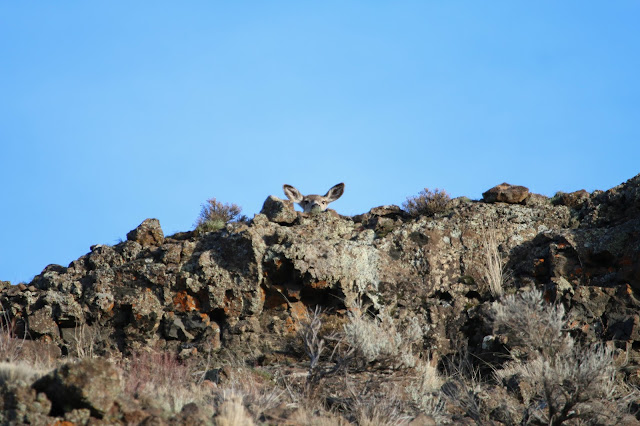 We finished the route, which ends in Arlington, around 4:30 and checked into the local Rodeway Inn, aka the only inn.  It was Christmas Eve and Elf was on the somewhat fuzzy cable TV.

In the morning we walked the dogs over to the town park where I picked up my 100th county bird, Hooded Merganser.  Stoked.  A few minutes later, #101 was a Bald Eagle by the little marina. 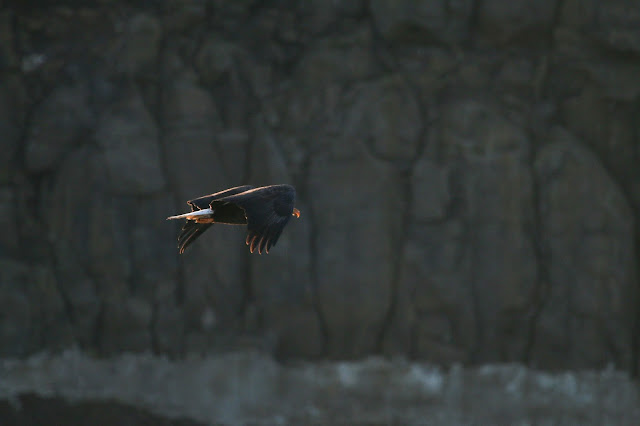 Out on the Columbia was a raft of Ring-necked Ducks with some Common Goldeneyes mixed in.  Farther west a small group of goldeneyes contained a pair of Barrow's, #102.

After packing up we headed over to Willow Creek for a chilly walk.  A flock of Cedar Waxwings got my hopes up for a Bohemian, but no luck on this day.

Mountain Chickadees were flitting about in the sagebrush: 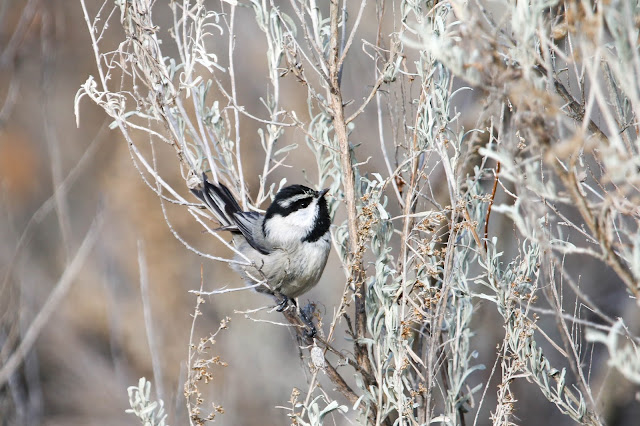 I picked up a couple of county ducks here, but nothing too exciting.  Along the dirt road back to the highway we stopped for the most tolerant Roughie of the trip. 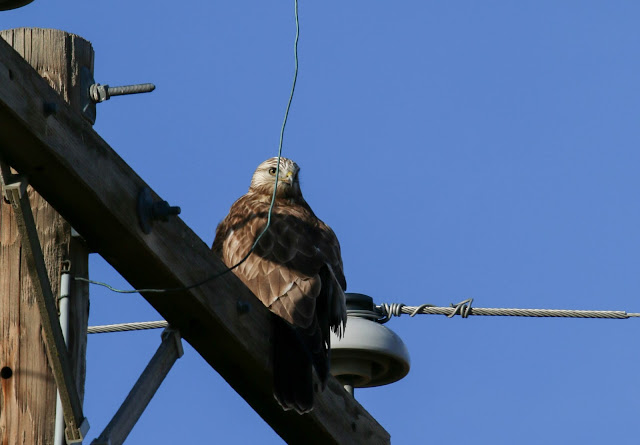 On the drive home we made one last stop at Celilo Park to check out a bird I had heard about for years but never actually seen, the leucistic (or something) Great Blue Heron: 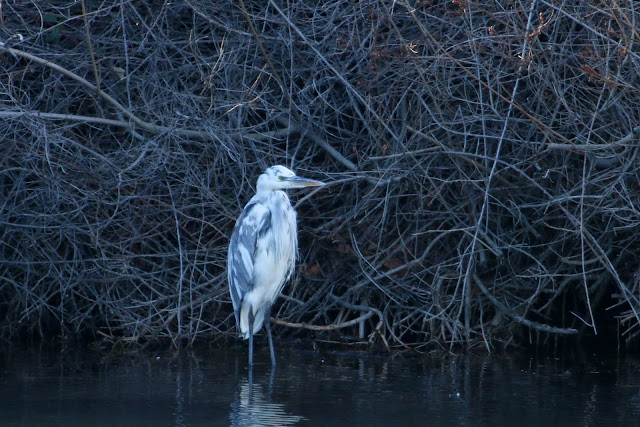 Neat.  It's been around for at least three years now, occasionally getting someone excited thinking it's a Little Blue. 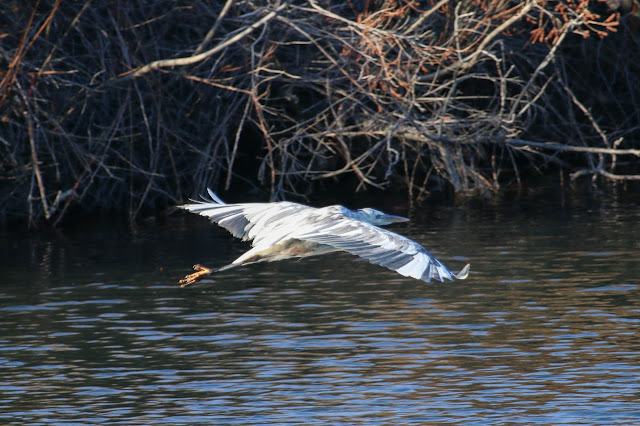 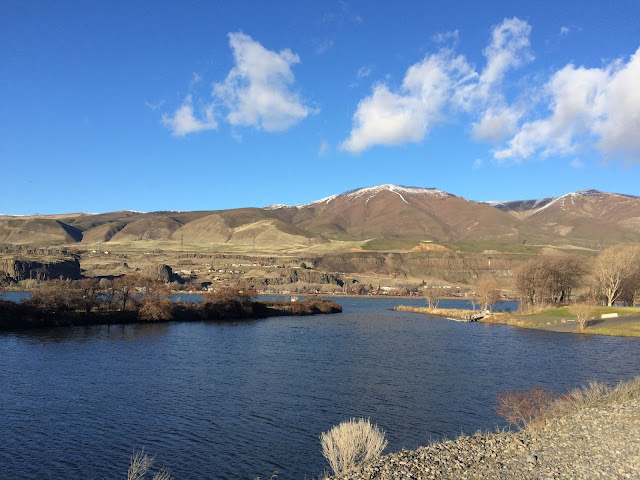