San Francisco Microwave?  Is that really what that means?  Apparently.  But it also means good birding.  It was Wednesday, January 13th, and we were hiking up the dirt road leading through thorn forest to awesome views of the surrounding areas. 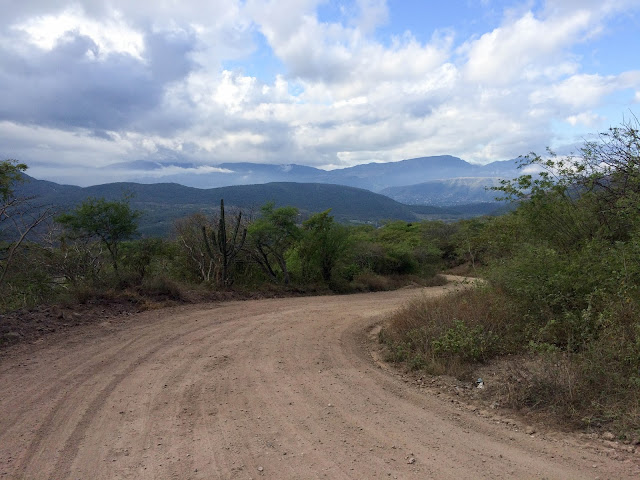 Many excellent birds were seen here, most disappearing without being photographed.  Since I pretty much missed the Lesser Roadrunner my favorite had to be the Black-chested Sparrow, which you should go look at here. Maybe someone else got a photo?  I do not know.  Here are a few other birds, including my lifer Hook-billed Kite that would have escaped our eyes had Caroline not tried to pee on it. 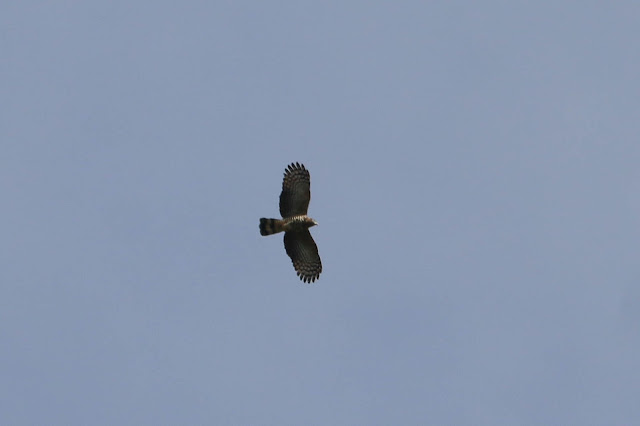 It became soaring bird o'clock as the kite was joined by Zone-tailed and White-tailed Hawks. 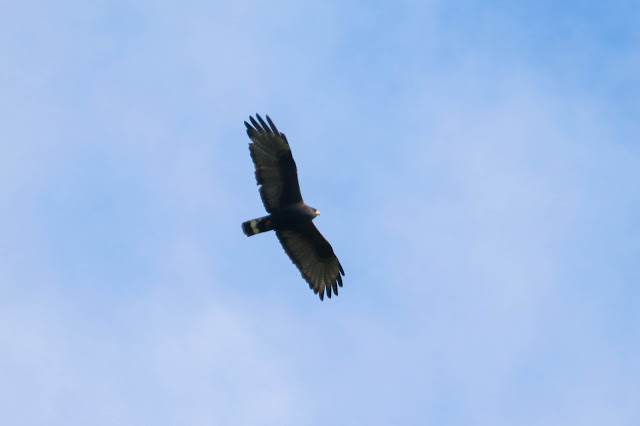 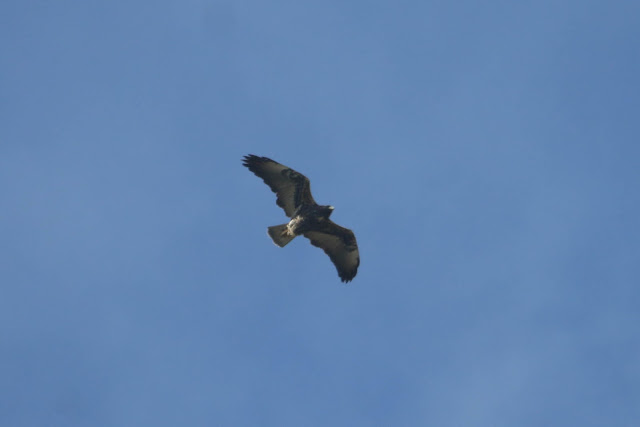 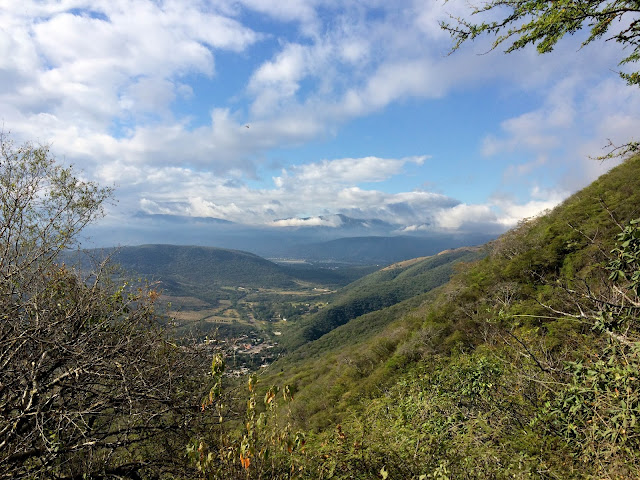 From here we headed to the volcanoes, stopping along the road during a major downpour.  It was terrible.  The next time we stopped, the rain did so also, and the sun came out and everything was okay again.  Mexican miracle.

Um, well, not everything was okay.  My stomach was doing fun things and I suddenly had the urge to go the bathroom.  Everyone was fawning over a Cinnamon-bellied Flowerpiercer while I ran off up a road into some trees to take care of business.  When I made my way back down the others had moved on to another road, but the flowerpiercer had not! 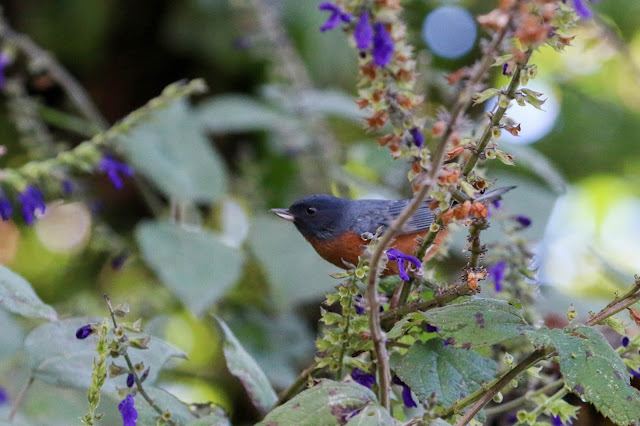 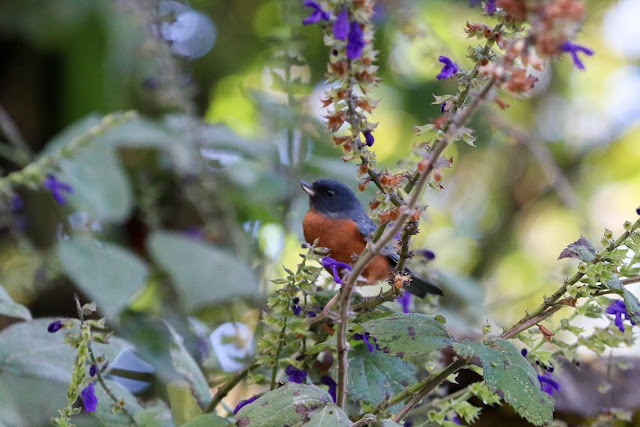 Below the flowerpiercer a nightingale-thrush was hopping around too! 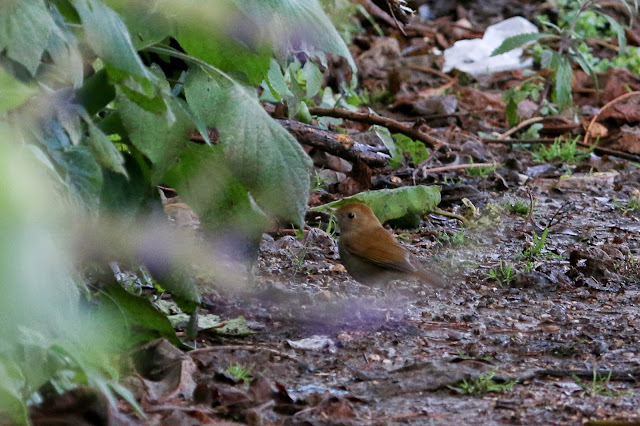 It took some discussion but eventually it was decided to be a Ruddy-capped Nightingale-Thrush, a bird we would see several more times.  Two more species were hanging out at this little spot, a Black-headed Grosbeak and a White-eared Hummingbird.  A delightful combo over all. 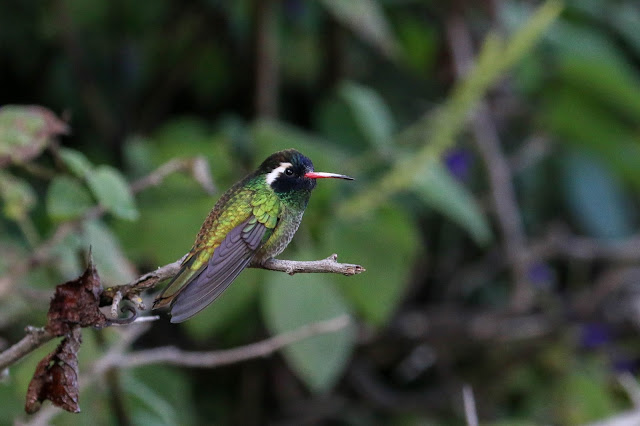 My time at this spot was cut short when a pickup truck full of youngish Mexican men pulled up and started yelling at me to take their picture.  I chose to catch up with the others at this point, though I truly believe they were harmless.

I have no more bird photos from this outing but we had awesome face-to-faces with Green Violetears and Grey-barred Wrens and my first Buff-breasted Flycatcher.  A Slate-throated Redstart hopped around me on my second sojourn into the trees for stomach issues.  Our first taste of the volcanoes was a good one, better than my best quesadilla.

On the 14th we birded the road leading up Volcán Nevado de Colima, becoming blinded early on by bold Red Warblers. 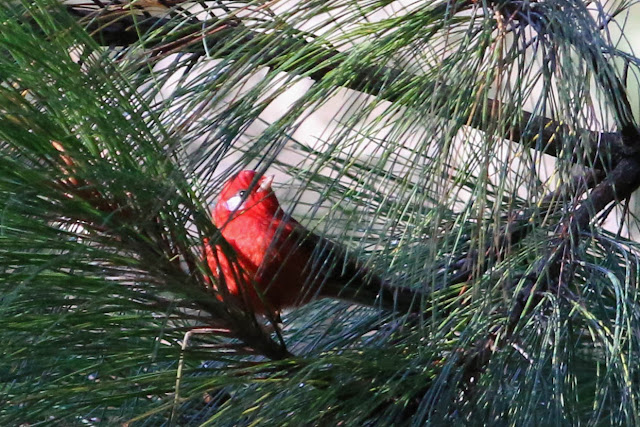 Some of my favorite birds from the whole trip were the Gray-barred Wrens, who would hang out together making crazy sounds which can be heard (kind of) on this video I put on Flickr. 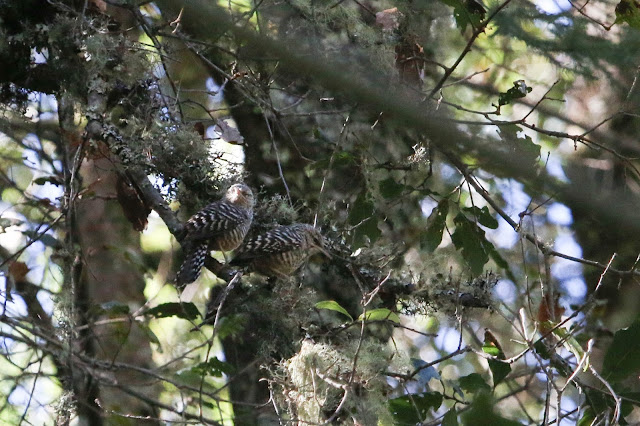 I had finally gotten my bins on a Green-striped Brushfinch (2000 late to the max) when Dan pointed out a Golden-browed Warbler hopping nearby.  I could not bring myself to look away from the brushfinch, a bird I kept missing, but was bummed to miss the warbler.  Thankfully when it was my turn to walk back down the road to get the van I found a couple at eye level in some shrubs. 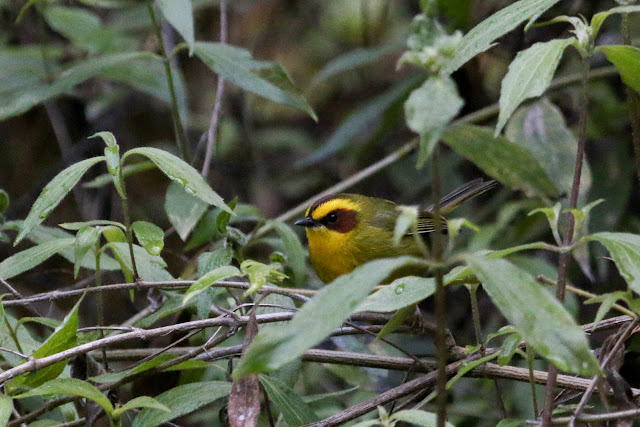 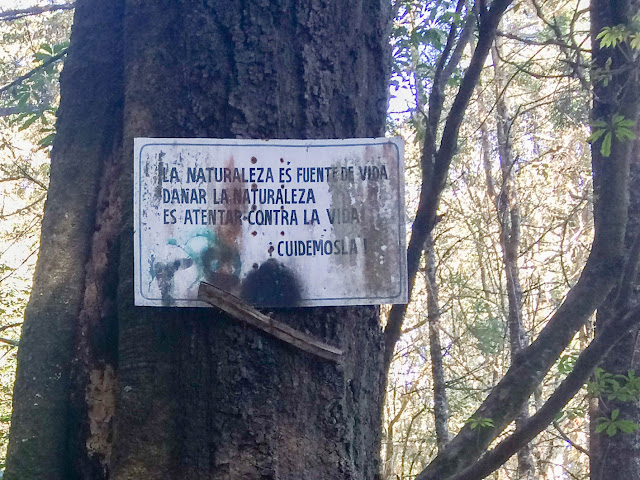 Nature is a source of life.  To harm nature is to threaten life and waste it?   This is why I am not a translator, feel free to tell me what this actually says.

At some point on this day we were walking up a road and we came upon our third and final trogon species of the trip, a Mountain Trogon. 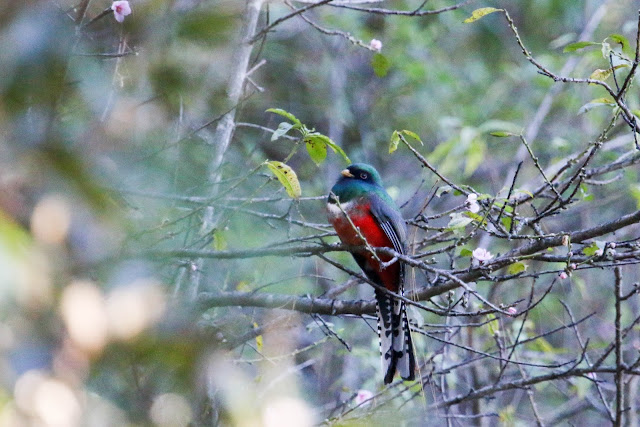 This bird let us gaze at its glorious being for a very long time.  It was delightful.  Dazzling even.  Not far from here we were introduced to the ridiculously adorable black-eared Bushtits which have been lumped and unlumped several times with our regular Bushtits.  They are currently lumped, but still a very cool little bird. 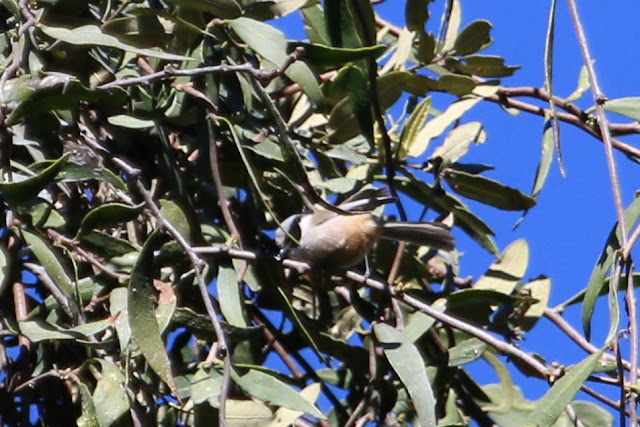 When we came down from the volcano we headed to the water we could see, Laguna Zapotlán, for Steve was convinced there would be Western Grebes.  There were not.  But there were other things like a Reddish Egret, piles of blackbirds and cowbirds, a Least Bittern I did not see, and a rather accommodating Vermilion Flycatcher. 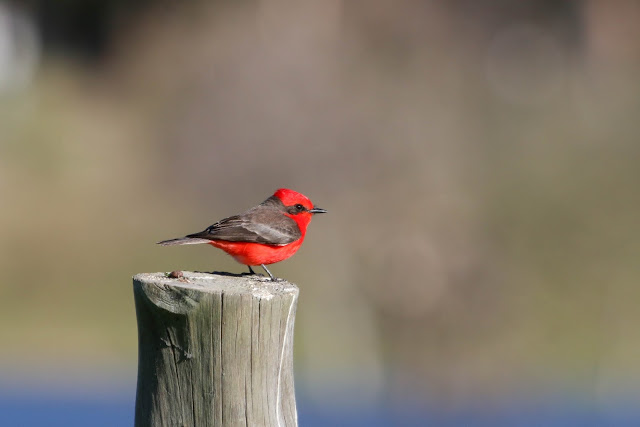 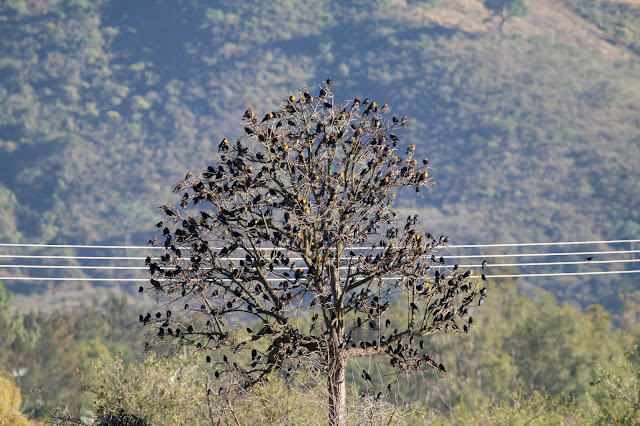 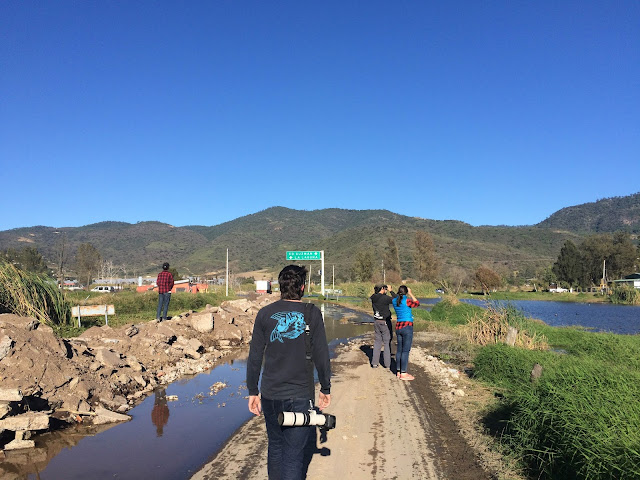 Nerds.  This is the road.  Large trucks drive up and down this road on the reg.