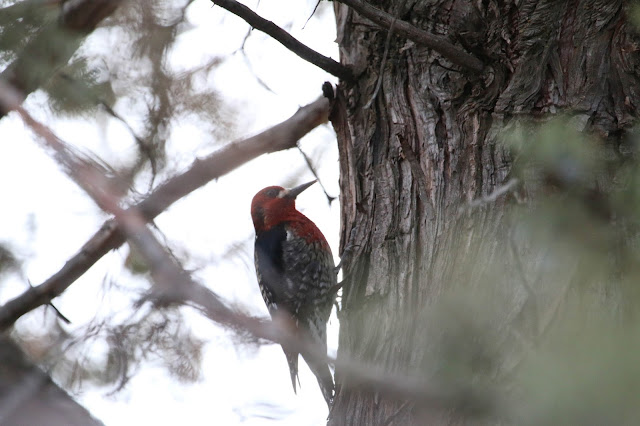 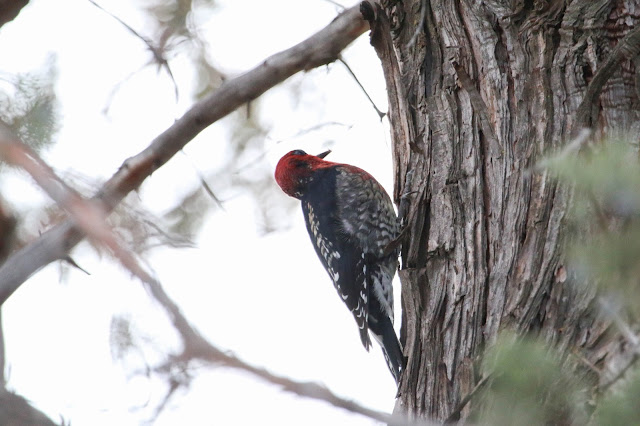 This sapsucker was seen by Frank and I when we stopped on Juniper Flat Road in Wasco County about a month ago.  We both thought it to be a Red-breasted Sapsucker, which came up as "rare" on eBird.  Rightfully so, as it was located east of the normal RBSA range.  In eBird there are not a ton of sapsucker reports in general around this spot; sightings include a couple RBSA, five or so Red-naped and zero RNSA X RBSA hybrids.

Though there are some dark spots on the bird's head and nape, we decided this was within a normal range of variation for RBSA and left it on eBird as such with a photo.  The eBird reviewer got in touch last week suggesting the bird to be a hybrid, likely RNSA X RBSA, because of these dark patches.

The problem gets muddier when we talk about subspecies.  Up here, we should only be seeing the ruber subspecies of RBSA.  This bird is often shown in field guides with a pure red head and breast.

This might be the best example I have, from Whitaker Ponds in Portland, February 2014: 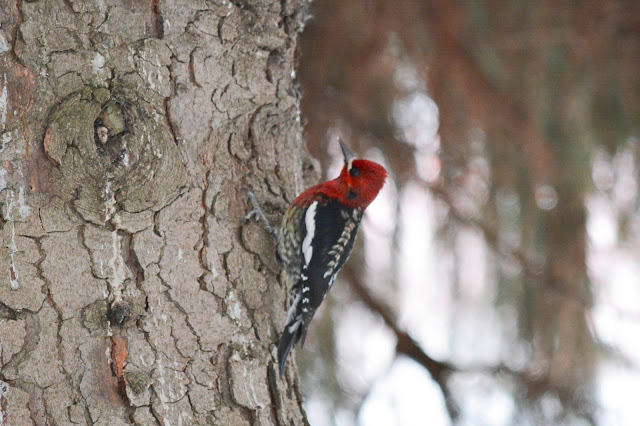 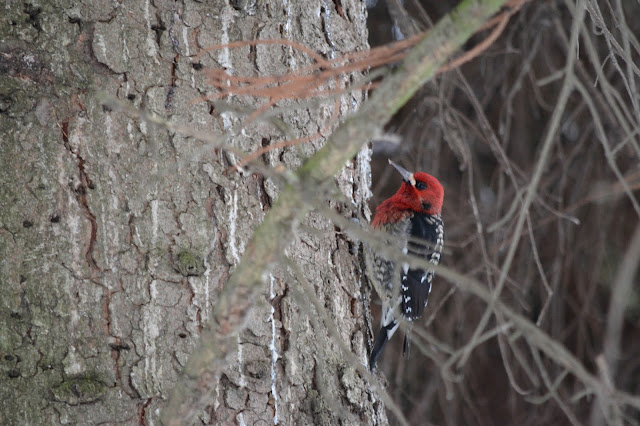 Even this bird has a small dark patch on the side, not something shown in field guides typically

Also, this bird from Washington Park in SW Portland (April 2011): 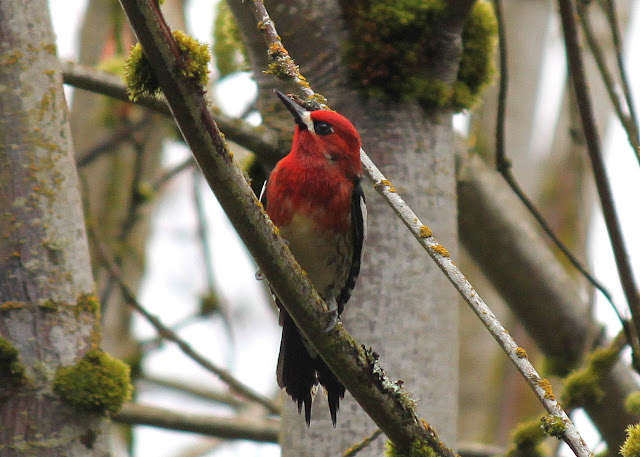 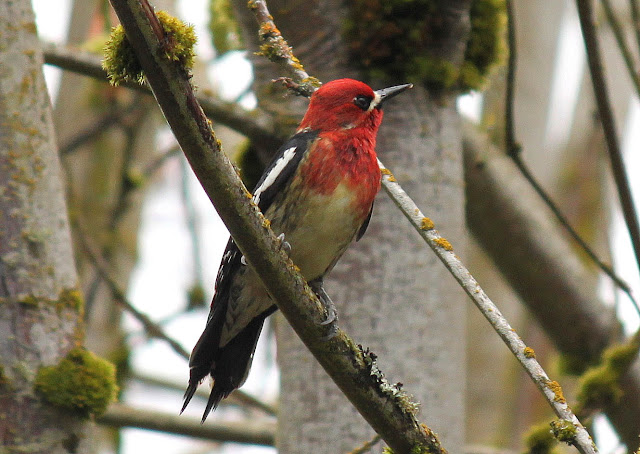 Again, I see a small dark patch along the pale but visible moustachial stripe

There is another subspecies, dagetti, found in southern Oregon and California that does show some dark on the side of head, as well as a more obvious moustachial stripe.  This is not a subspecies we should be seeing in the Portland area nor in Wasco County.  I believe the sapsucker in this post by Seagull Steve would have to be dagetti.

This is all fine.  The Wasco County bird does not appear to fit the mold of a ruber bird and based on range, it should not be a dagetti.  But...

The big but:  I see weird sapsuckers all the time.  In Portland.  In Multnomah.  On the west side of the Cascades.  They have dark patches, they have pale moustachial stripes, they have great variation.  Maybe some are hybrids, but all of them?  That seems like a stretch.

Let's start with two different birds from January 2014 when I walked to Whitaker Ponds.  I found a sapsucker on my way there on Cornfoot Road at the Air National Guard: 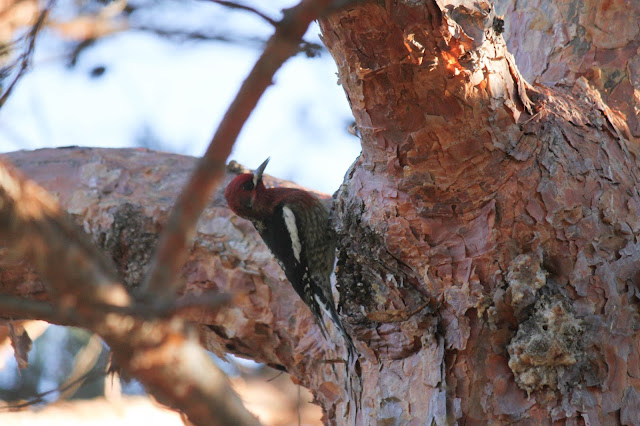 One ID point to mention with ruber and dagetti is that their back pattern differs as well.  The back of a ruber has narrow rows of spots, whereas dagetti has wider rows of spots and I find it looks messier.   Red-naped has even more white than dagetti on the back.  The above bird has a clean-ish back but look at the head!  It's a mess!  Mustachial stripe, plus dark patches on the side/nape.

I found a second sapsucker along a road off Columbia Blvd that borders Colwood Golf Course that same day: 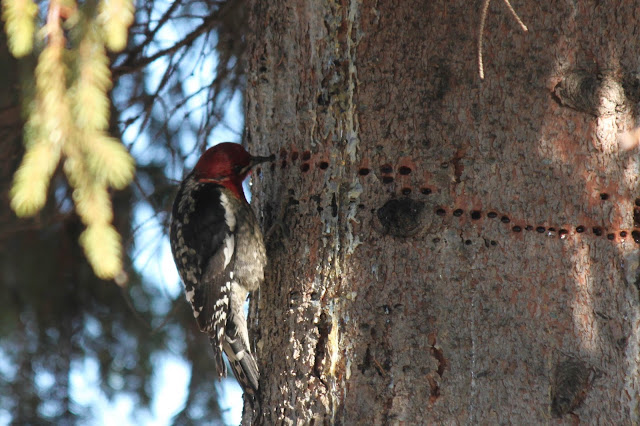 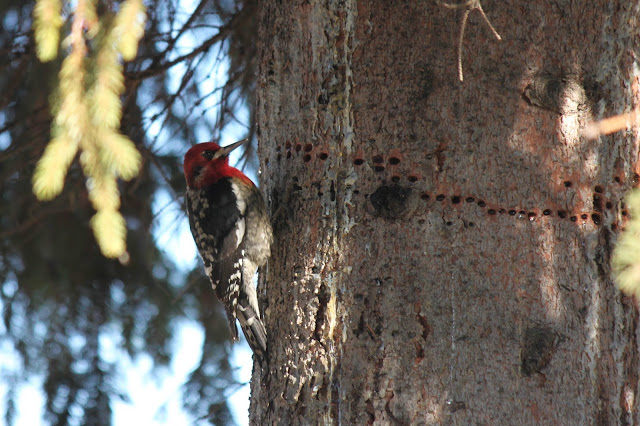 What?  Now that mustachial stripe is ridiculous, and that back has more white on it.  So is this a RBSA X RNSA hybrid right here in Portland?  The only eBird record I see of a Portland hybrid is this one from the Hinkles.

Digging in my blog archive I found a (terrible) set of photos from Eagle Creek in eastern Multnomah County of three sapsuckers on a tree (March 2012). 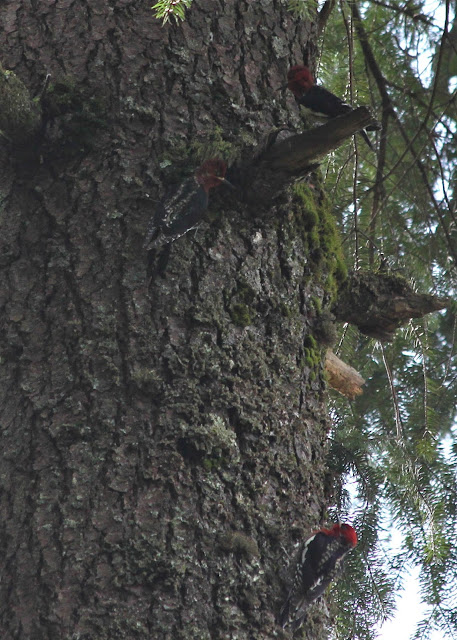 Yes this is a crap photo, but the bottom right bird stands out since we can see its nape which has a lot of dark on it. 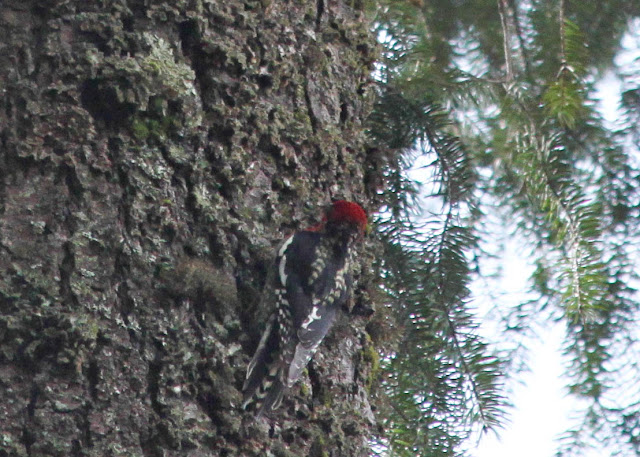 Not cool.  That red should extend down the back of the head and it clearly does not.  For comparison with the above bird, I offer this sapsucker from Kelley Point Park, September 2011: 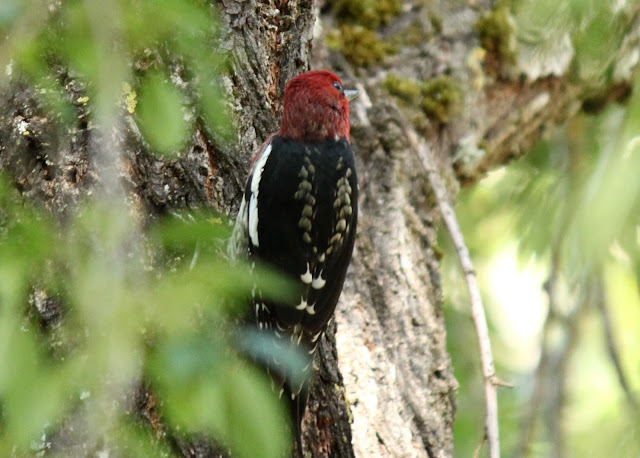 The back patterns on both birds look good, but what a difference on the napes!

Another resource for RBSA photos, the Cornell website.  The first photo is from CA and should be dagetti, the next three are from northern Oregon (Clackamas and Washington Counties) and Washington state (near Tacoma), and should represent ruber.  But look at these photos- SO much variation!  That Tacoma one in particular looks much like my Wasco bird.  Also check out this Seattle Audubon Society page, particularly the second photo.  Hmm.

When I first posted on OBOL asking for input on the Wasco bird I received some helpful links from Bob Archer, starting with this article on hybrid sapsuckers by Stephen Shunk, the king of all things woodpecker.  He mentions many field marks for RBSA X RNSA hybrids, which are variable of course, but can include white above the eye, dark feathers showing through on the breast, and black on the nape.  The Wasco bird definitely shows the black on the nape, though little else to suggest hybrid.

The main question I am left with is:  what is an acceptable amount of variation in Red-breasted Sapsuckers?

As mentioned in Stephen Shunk's article, a hybrid index was created for YBSA and RNSA in Alberta, Canada for something called Project Sapsucker.  The forms look like this: 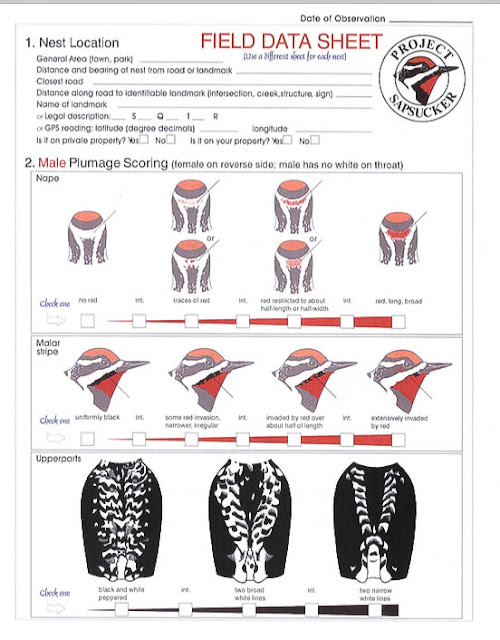 If only something similar was created for Red-breasted X Red-naped, then maybe we could grade birds on the index and decide what is allowable.

Conclusion:  The Wasco bird definitely shows dark patches on the side of the face and nape which field guides do not mention as field marks for ruber.  I am not arguing that.  But if I am to become convinced this bird is a hybrid then am I to determine most of the sapsuckers I see to be hybrids?

That, my friends, is The Sapsucker Dilemma.