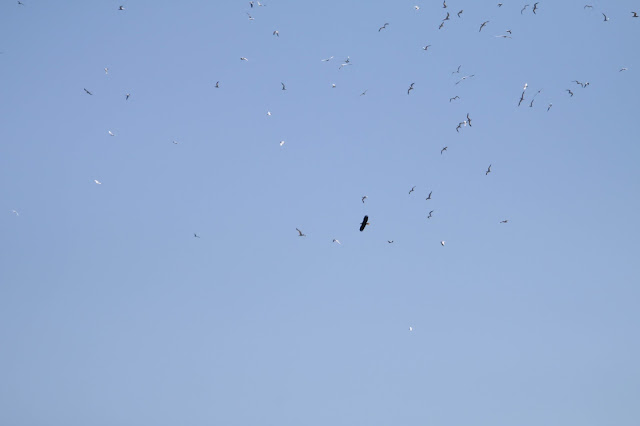 This is not a particularly good photo, nor is it a particularly good combo, but look!  No dirt in the sky!  I picked up my freshly cleaned camera from Camera Solutions on Wednesday morning and drove straight to the coast to test it out.   I timed it so that I would arrive at low tide and then have about four hours to find some shorebirds.  Parking Lot D was my first stop, where Caspian Terns hang out to eat fish and have sex. 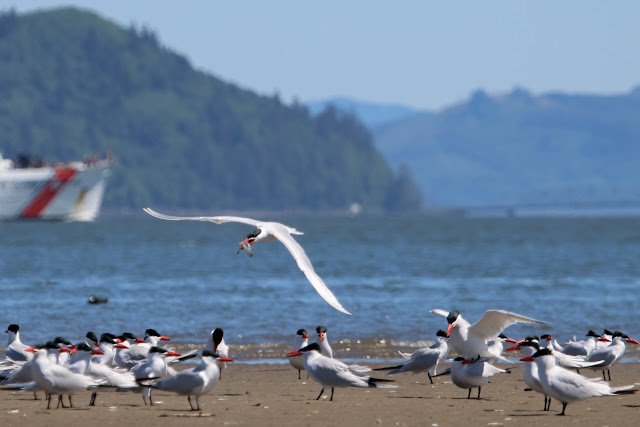 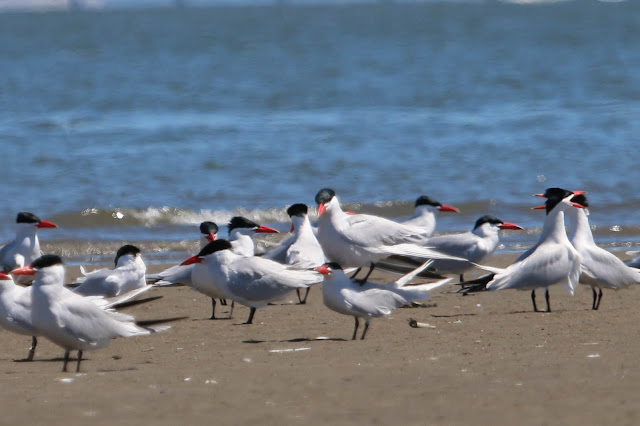 A couple Greater Yellowlegs flew over and a small flock of Dunlin and Western Sandpipers took turns bathing in an inlet.  It was mellow and I was itching for more excitement.  I drove over to the South Jetty which rarely disappoints and walked out to the river beach.  Shorebirds were flying by me constantly from the jetty and I hoped to find some along the water that actually stopped. 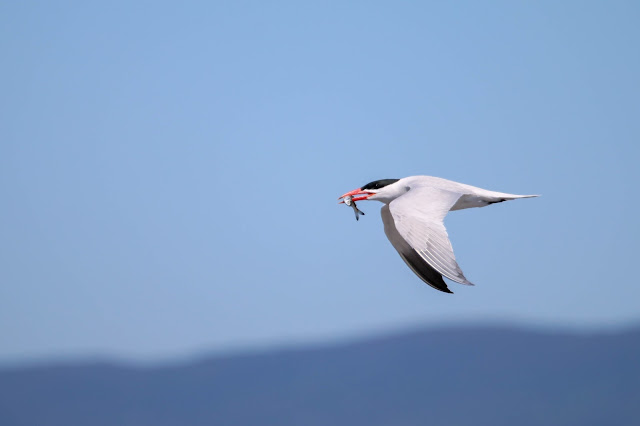 Terns entertained while I waited.  At one point I looked back down the beach and a Greater White-fronted Goose was standing in the sand.  Then two Brant flew by offering a lovely goose combo. 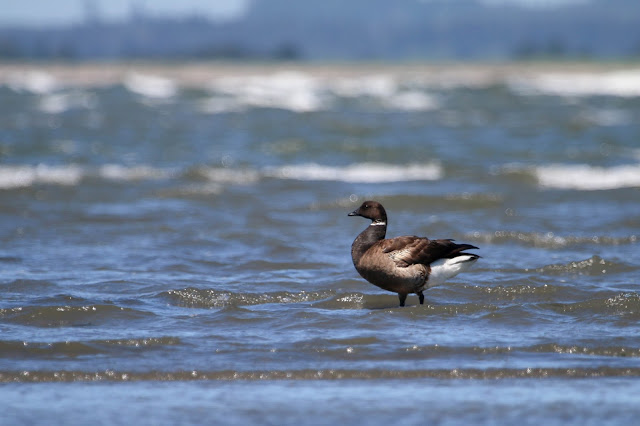 A small flock of shorebirds stopped near me but took off quickly when I raised my camera.  Maybe this was not a good spot.  I began to walk away then thought, when do I ever hang out with Brant?  I should hang out with those Brant.  So I walked back and almost immediately shorebirds decided to join me.  Thanks, Brant. 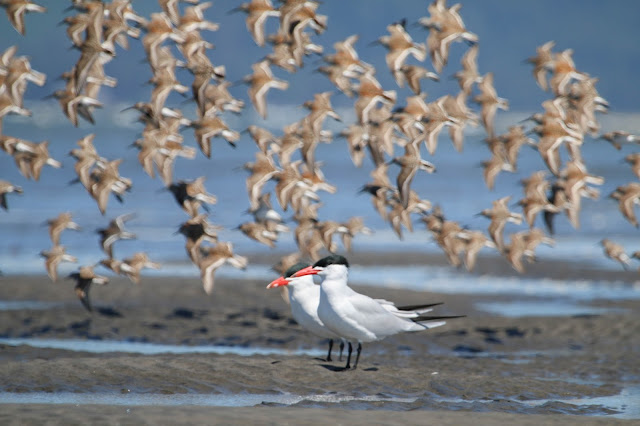 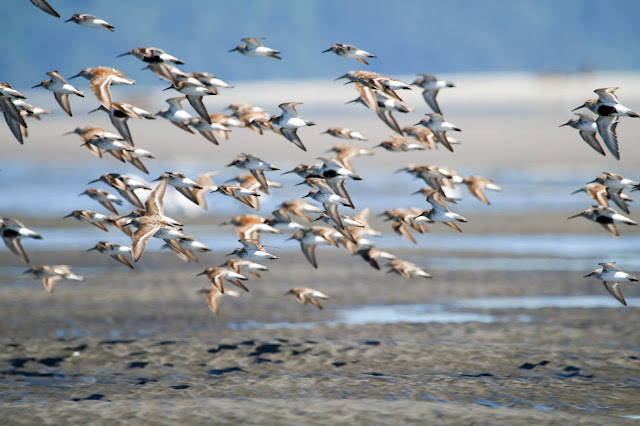 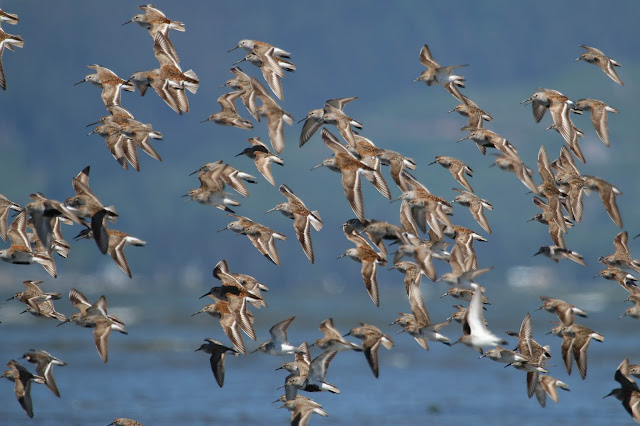 Initially it seemed to be all Dunlin and Western Sandpipers, the commonest combo of the day. 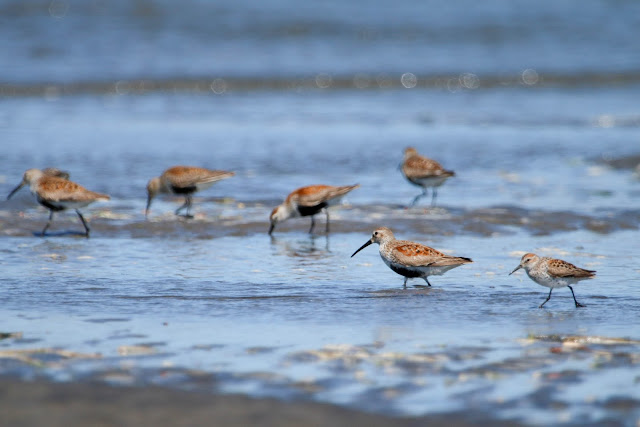 Then I noticed a couple of Red-necked Phalaropes were in the mix. 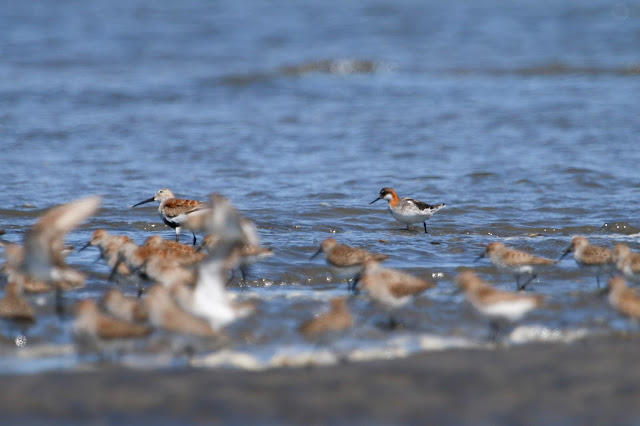 One of my birding fears is that an interesting bird will be around and I won't even realize it, either because I had not known the bird existed (like a Siberian vagrant) or because I am not paying enough attention.  These fears are valid.  While I watched the shorebirds coming and going as the tide rolled in, this one sexy mutha decided to stroll in to the mix... 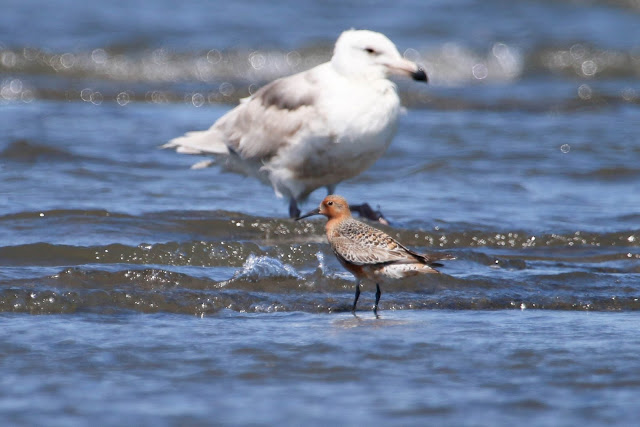 Thank gawd the next bird to stroll into the mix was actually a dowitcher. 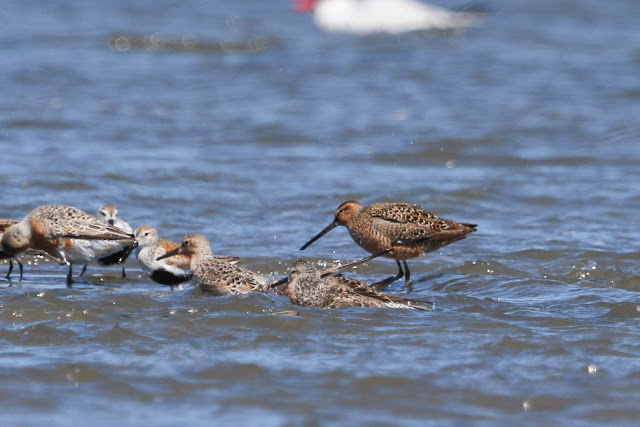 Short-billed?  Long-billed?  Bob Archer sent me this great link on Long-billed ID, check it out.

I knew that other bird was not a dowitcher, but what was it?  A dozen more of its buddies showed up. 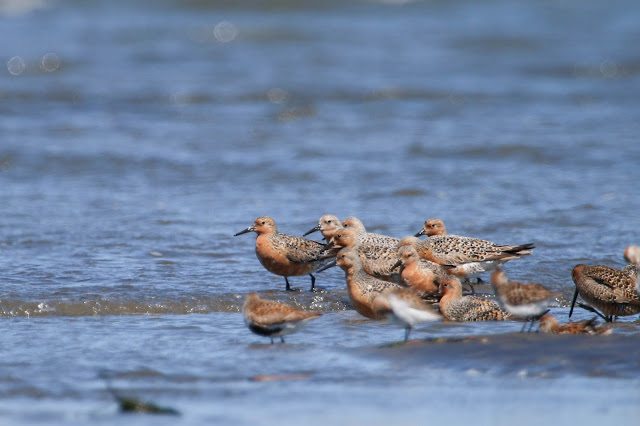 They had to be Red Knots but seeing this many of them is not exactly business as usual on the Oregon coast.  Most sightings are one or two birds and here I had 21.  Amazing.  This has been an exceptional spring shorebird migration for Oregon and I was glad to find out I was not the only one with crazy numbers of knots.

I walked back to the jetty lookout excited over my new state bird (yet not a year bird, sad face) and noted the bold Barn Swallows perched on the structure.  I could have grabbed one. 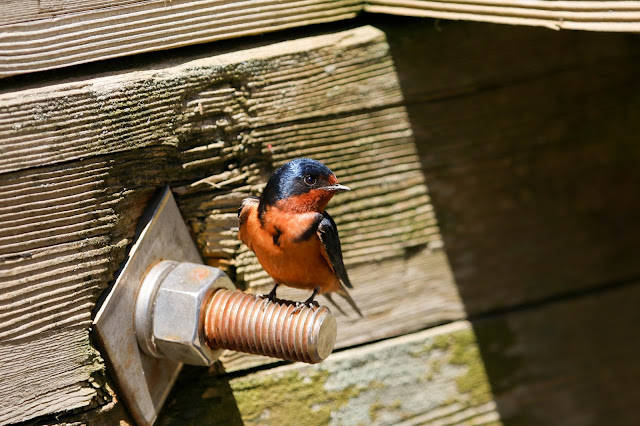 From the top of the lookout I could see the beach closer to Parking lot B and noticed Whimbrels and many other small shorebirds, so I drove on over.  As I walked the beach towards the jetty birds were streaming in constantly and I had a nice variety. 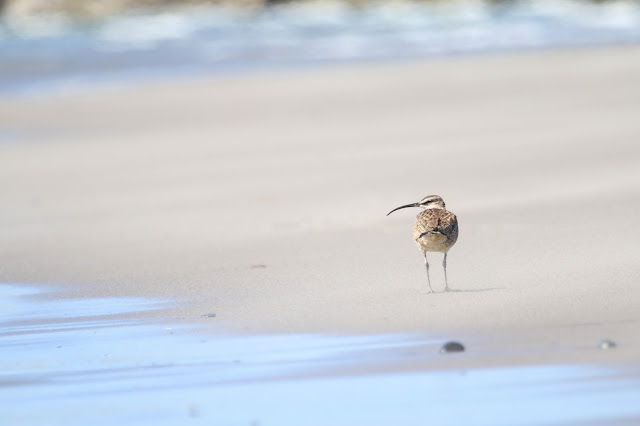 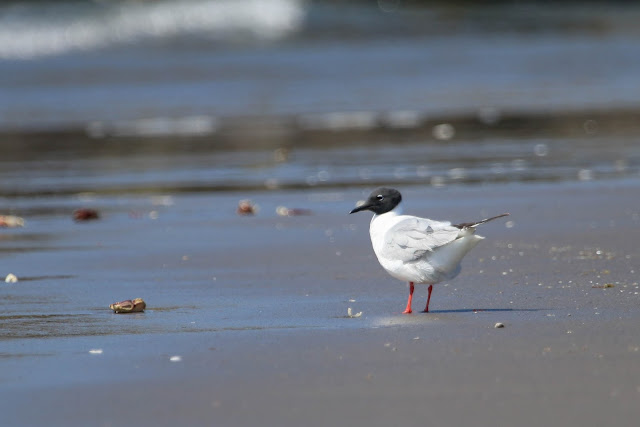 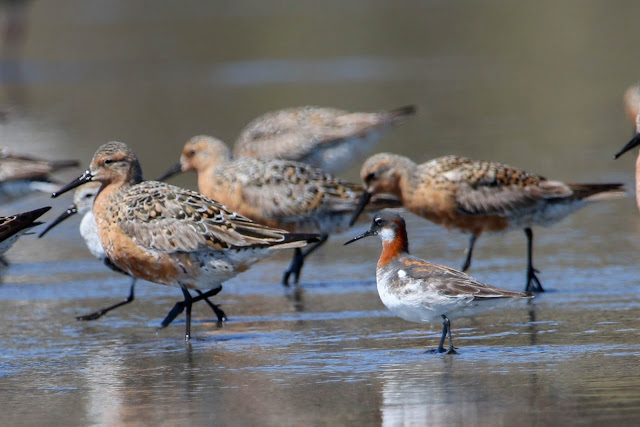 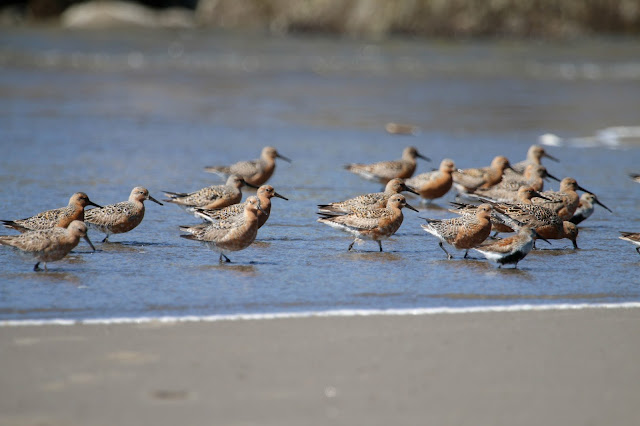 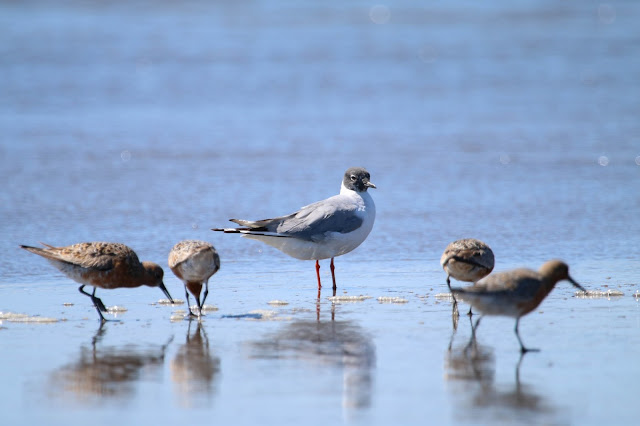 I walked all the way up to the jetty before turning around to find the shoreline behind me had become packed with birds.  It was an awesome moment, a moment of swooning over birds and a moment of gratitude.  If anyone was up on the jetty lookout watching me through a scope I probably would have looked insane, laughing and talking to no one about how fucking awesome birds are. 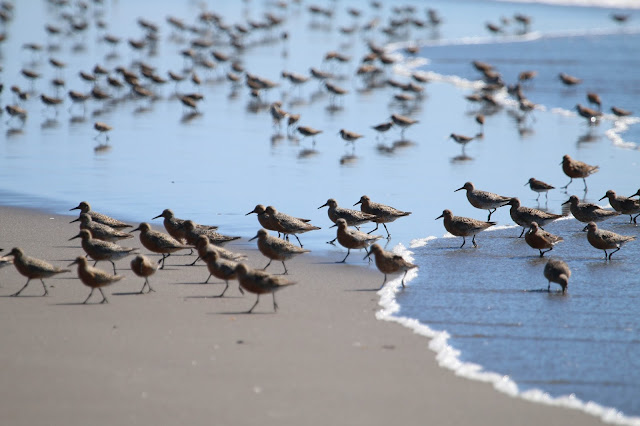 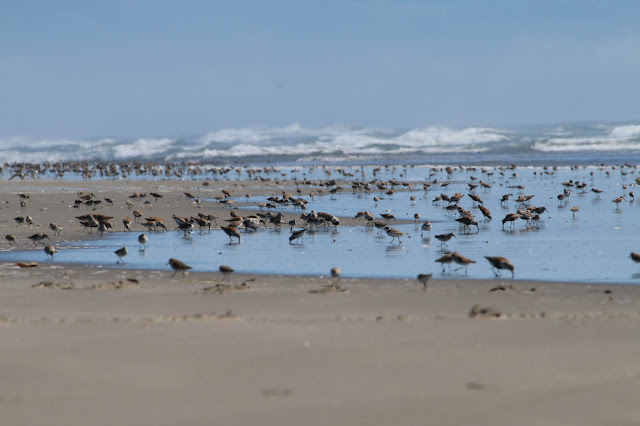 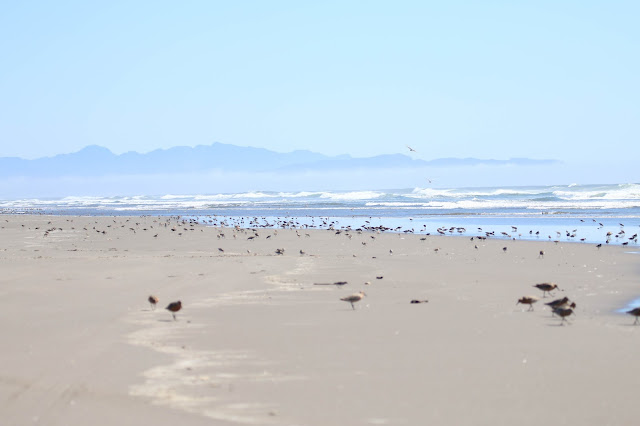 I noticed that some birds were landing way up on the rocks, away from the shore, and went to investigate.  Mostly Semipalmated Plovers but also a few WESA's and Dunlin and one Whimbrel. 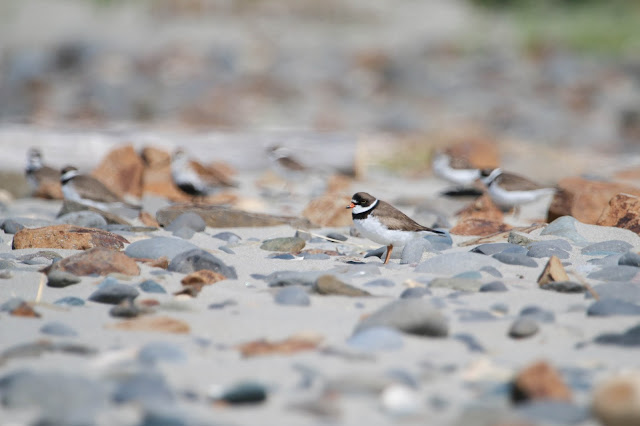 This next bird confused the crap out of me at first but finally realized it was a breeding-plumaged Sanderling.  Not something I get to see often. 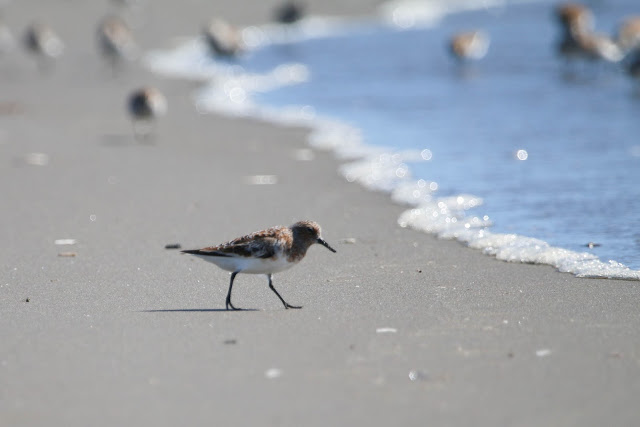 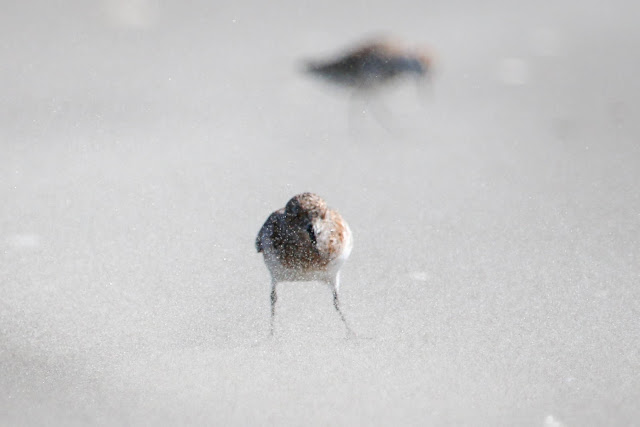 The birds were getting denser along the shoreline but I had to drag myself away to head home.  This was the best spring shorebird migration I had experienced on the Oregon coast.  I don't know if that's because this year is particularly good, as I suspect, or if I have just missed it in previous years.  Either way, I won. 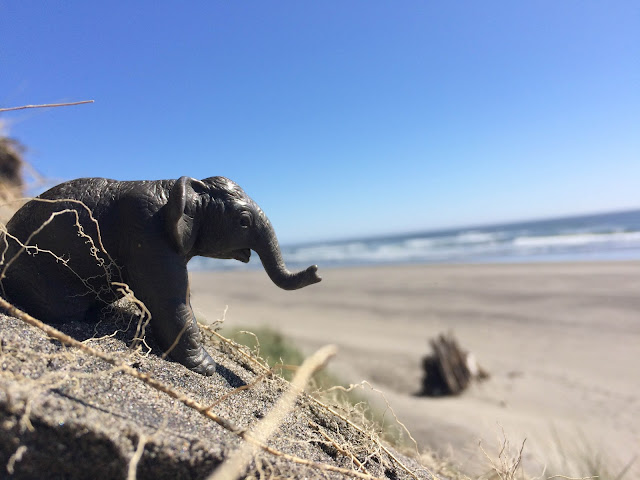 When I pulled into my driveway at home I saw a Black-headed Grosbeak stuffing itself in my millet tray.  Yay!  Good times!! 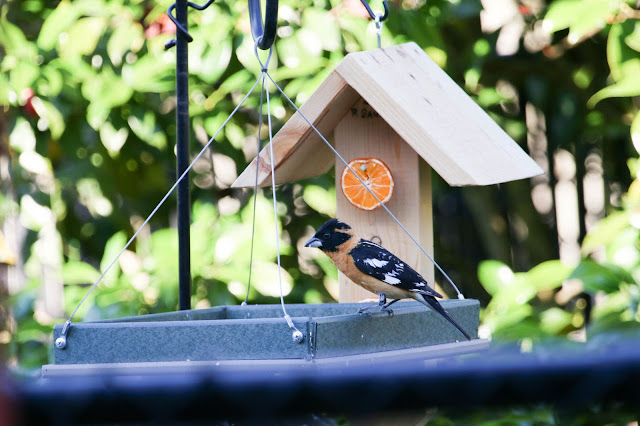