on May 28, 2016
Tuesday morning I packed up the car and headed south to Jackson County to bird with local Russ "I've seen 100% of the species in Jackson County this year" Namitz.  For the record he does not call himself that, but I found it hilarious when I looked at the Top 100 on eBird for the county.  I arrived in the mid-afternoon heat, perfect time to hit the sewage ponds on Kirtland Road.

I took zero photos here but trust me, it was good.  Year birds and state year birds around every corner including Wilson's Phalarope, Blue-winged Teal, Great-tailed Grackle, and Northern Mockingbird.  Next up was Tou Velle State Park which had Yellow-breasted Chat, Wrentit, Bullock's Oriole, Yellow Warbler, and more.  After a stop at Avenue G we picked up the best burritos in Medford (lies) and drove out to Howard Prairie.  It was pouring and there was a rainbow.  Despite this I got a very good lesson in empids and potato chip/bean dip songs.

After sunset we finally located a Great Gray Owl which was obviously awesome.  Too dark for photos but fantastic views nonetheless.  Later on we heard Common Poorwill, Western Screech-Owl, and surprisingly a Sora.  This was a very good 7 hours or so of Jackson County birding.

The next morning we headed out to Lower Table Rock so I could nab a state bird I had yet to meet up with, the California Towhee. 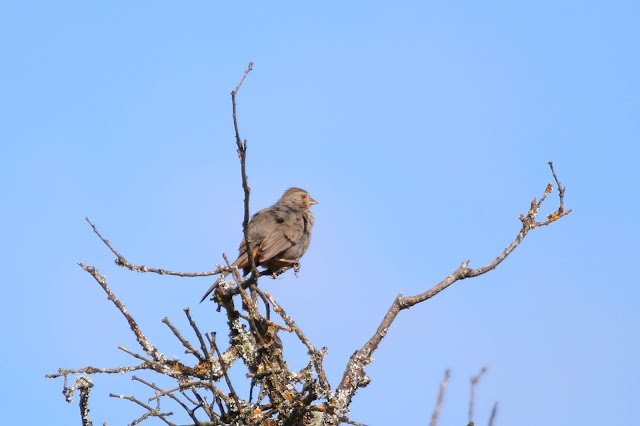 We walked the Savannah loop trail and found Ash-throated Flycatcher and Oak Titmouse as well. 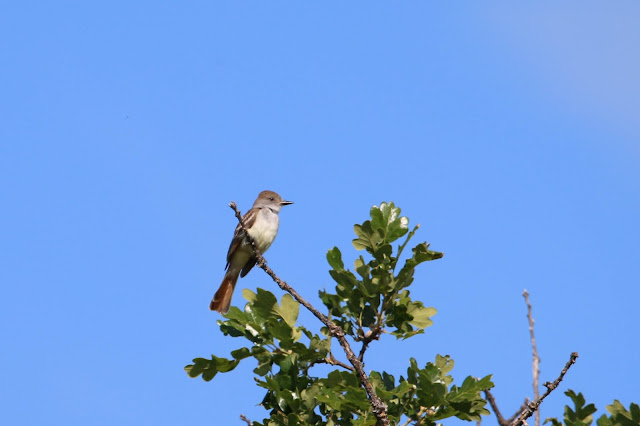 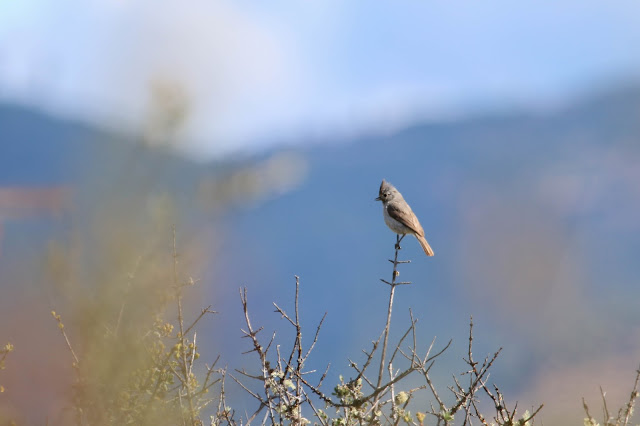 After this we headed into the woods for the real treat of the trip.  Along the way Russ pointed out these: 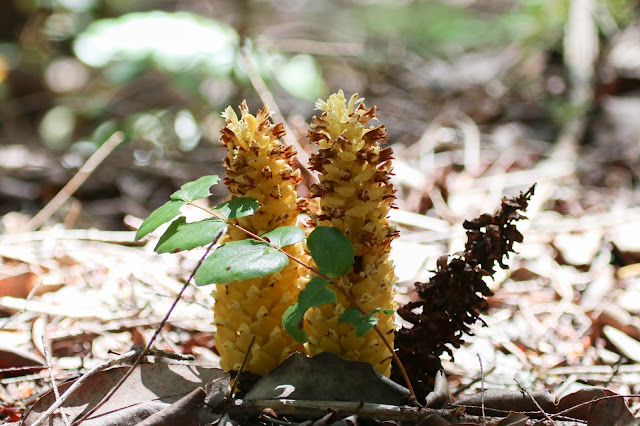 With a bit of effort, braving both poison oak and ticks, we made it to the bird I had been most excited to meet, the Spotted Owl. 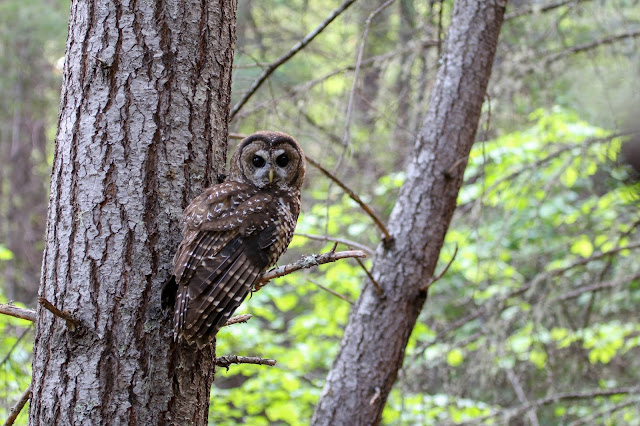 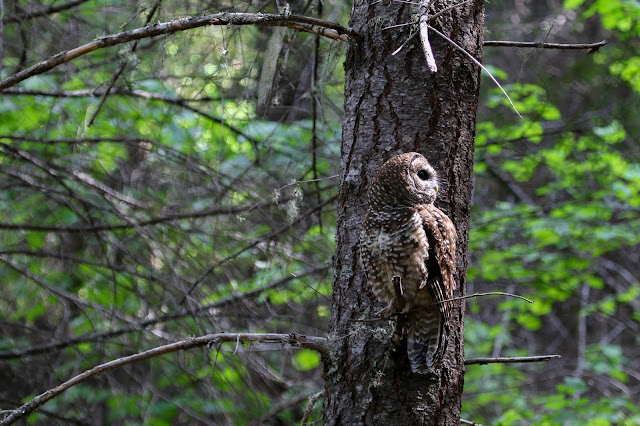 A male and female pair, female in foreground: 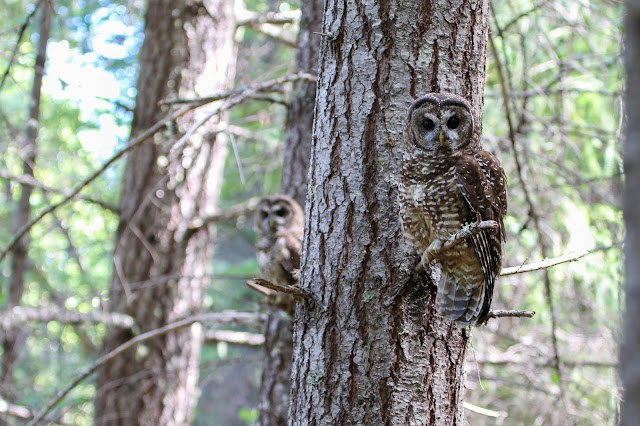 Thanks to Russ I had incredible looks at these beauties.  What an experience!  From this spot we headed back to Medford, stopping to try for gnatcatcher in one spot.  This swallowtail was the consolation prize. 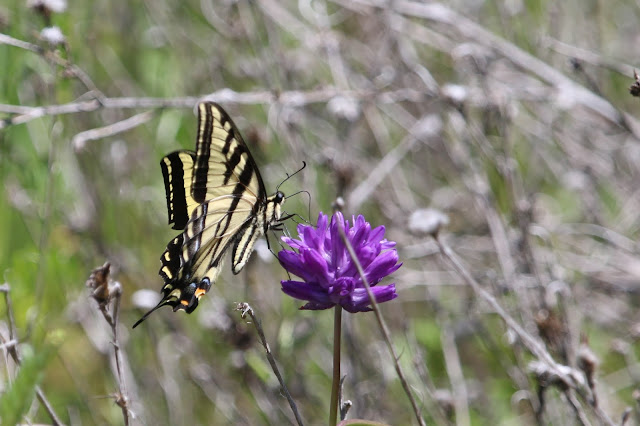 After some celebratory pizza and beer I ventured off on my own, back to Lower Table Rock.  This time I hiked to the top enjoying the wildflowers and bugs along the way. 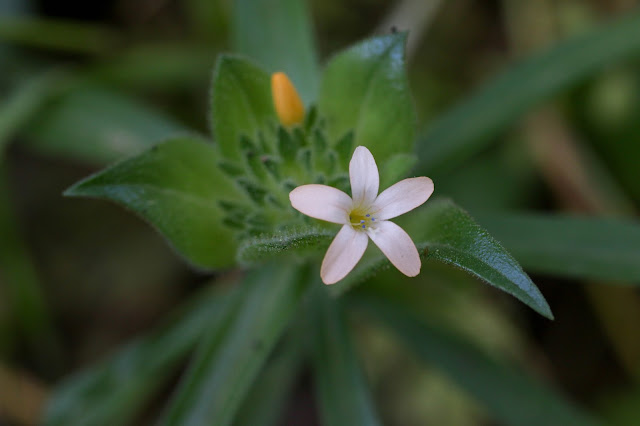 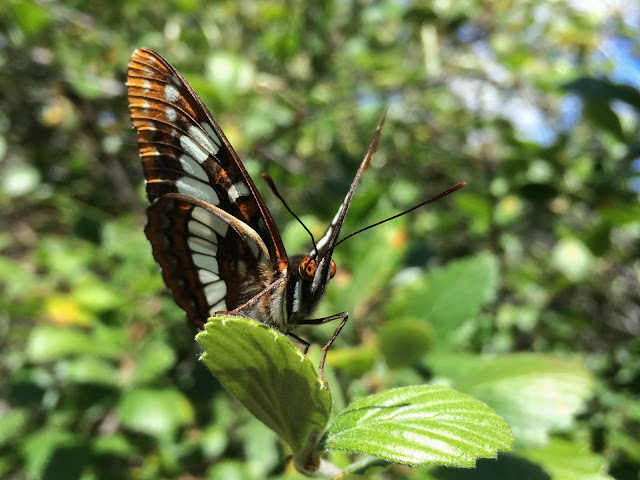 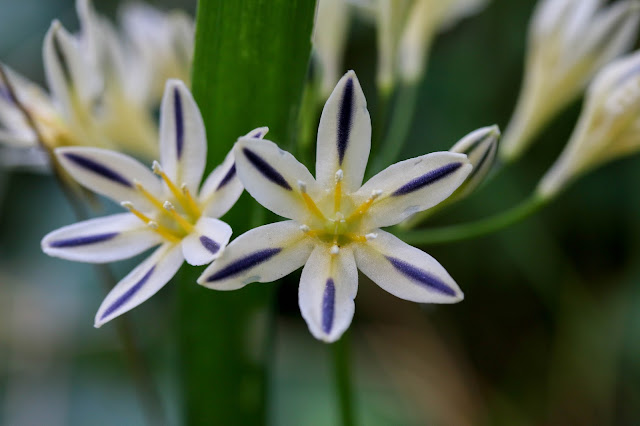 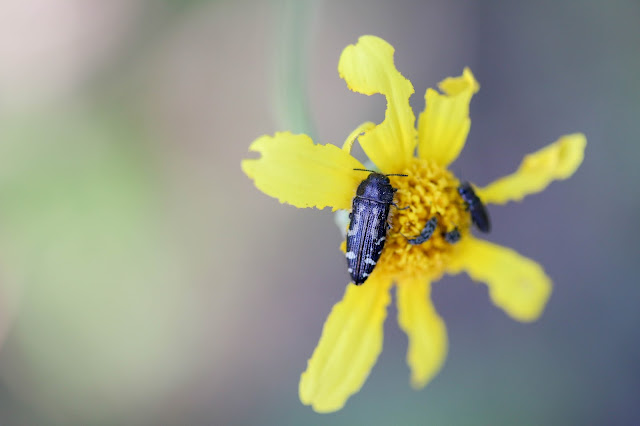 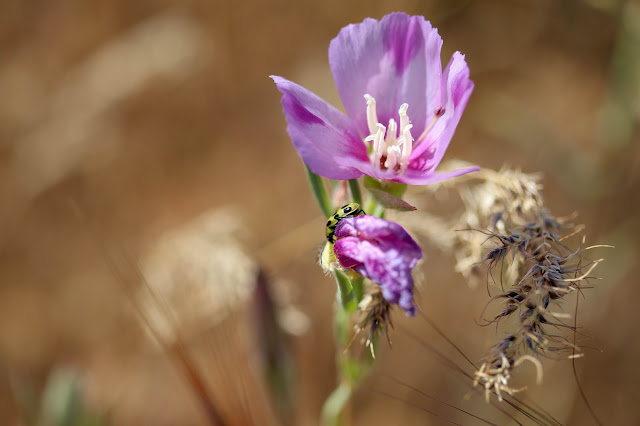 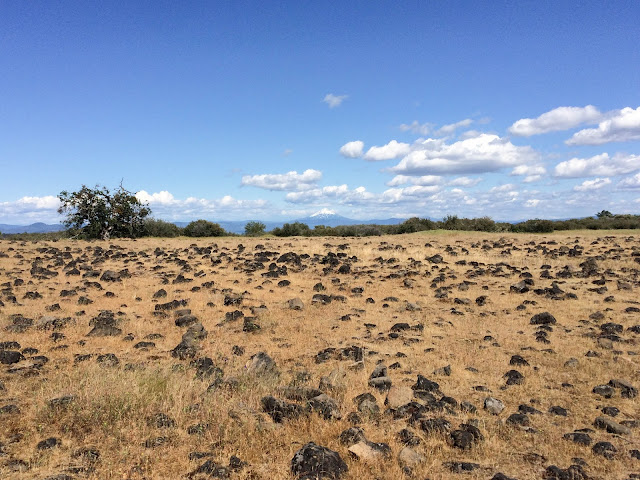 Top of Lower Table Rock, Mt McLoughlin in the distance

I will spare you the tons more flowers I photographed and skip ahead to camping.  Russ had recommended a spot where I could hear Flammulated Owl and I was eager to get there and set up camp.  Not to mention eat my can of chili. 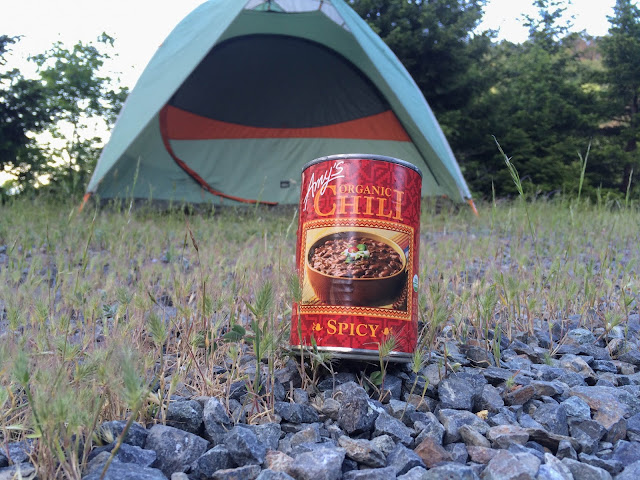 As I waited for it to get dark I sat on the back of the car, drinking a beer, when a deer appeared.  She stuck around snacking on the vegetation nearby until well after dark, and later on when I got in my sleeping bag she came back to snort and snuffle right next to the tent.  We are pals.

Darkness was slow to come but when it did I spent a long time messing around with star/tent photos, listening for owls.  Eventually I heard something very distant that I thought might be a Flamm.  The sound came closer after about 15 minutes and I was able to confirm it was the single deep hoots of a Flammulated Owl.  SO cool.  A Western Screech-Owl joined the soundscape for about ten minutes before leaving the Flam to be the star of the show.  Lifer! 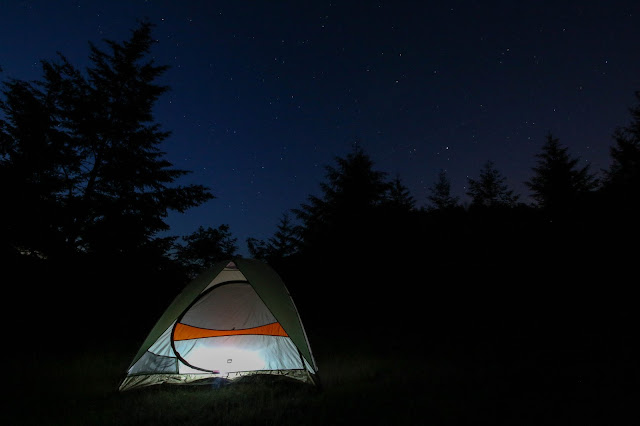 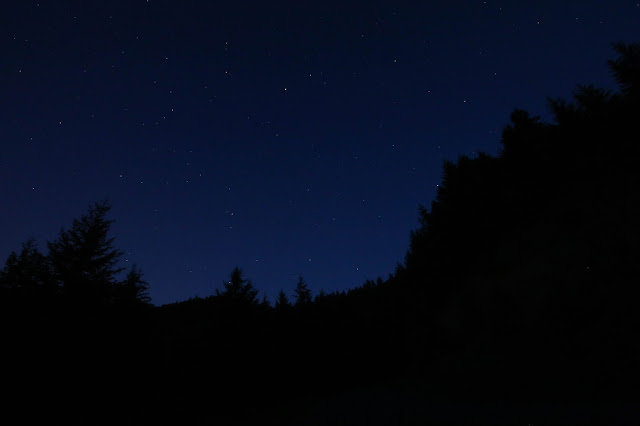 It was a quiet night of camping till I woke around 5:45 to the sound of Band-tailed Pigeons and Mountain Quail calling.  Not bad.

I made coffee and oatmeal, then broke down the tent and began the drive back to the highway, stopping for wildflowers along the road. 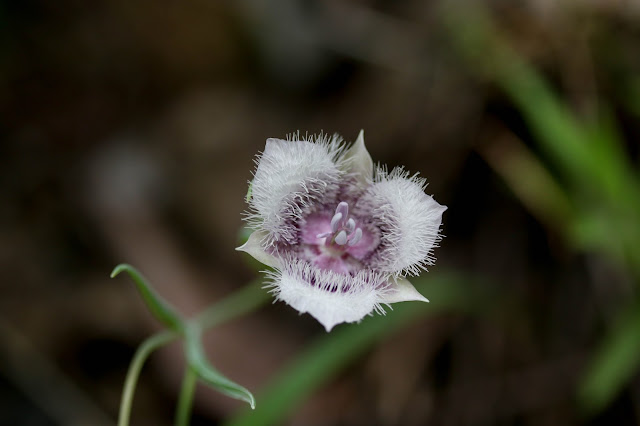 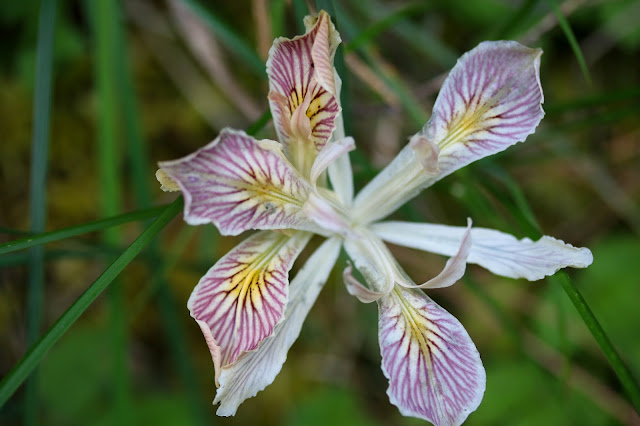 Before heading back to Portland I stopped in Josephine County to bird Whitehorse County Park on the Rogue River.  My two minutes of research on my phone told me this spot offered a great variety of birds and I found that to be true. The only issue I had was that the trails were overgrown with a mixture of weeds, grass, and blackberries, so I worried about ticks.  None found though!  A quick photo dump of what I found here: 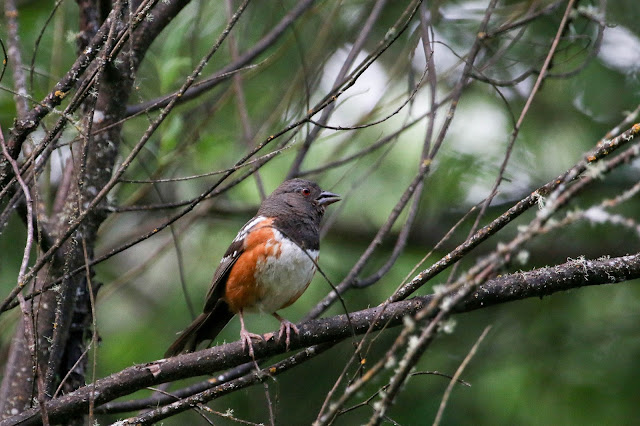 Perhaps the towhee capital of Oregon 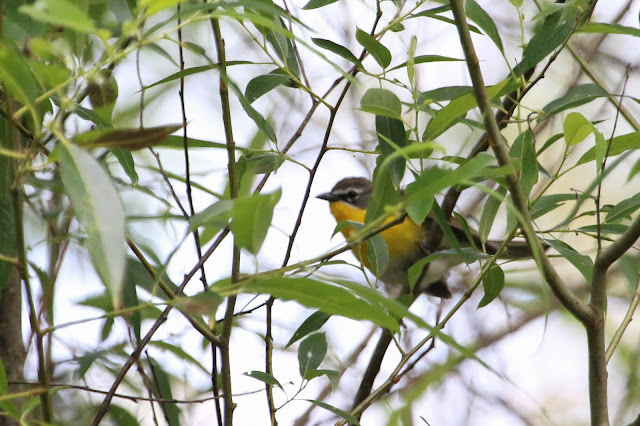 Yellow-breasted Chats were extremely noisy and extremely hard to locate 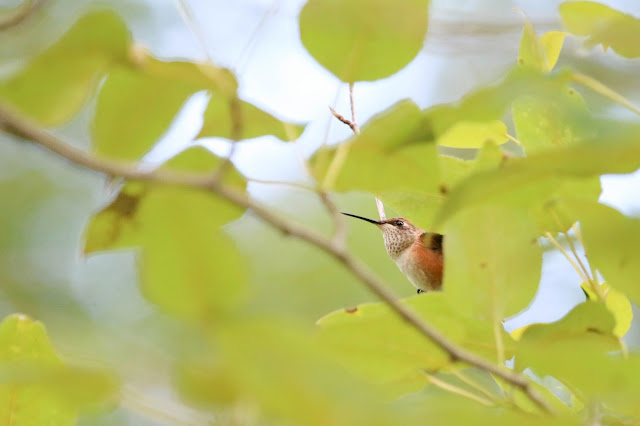 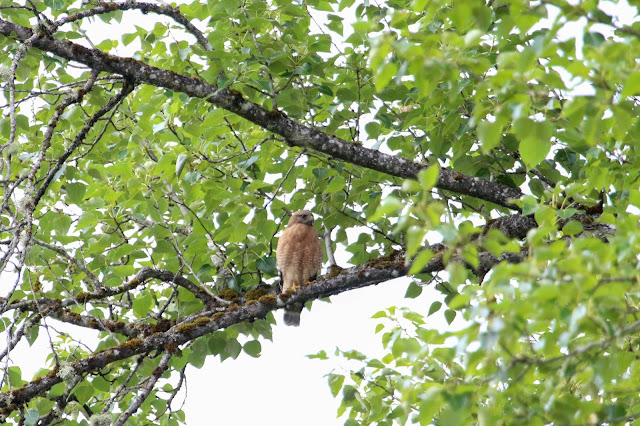 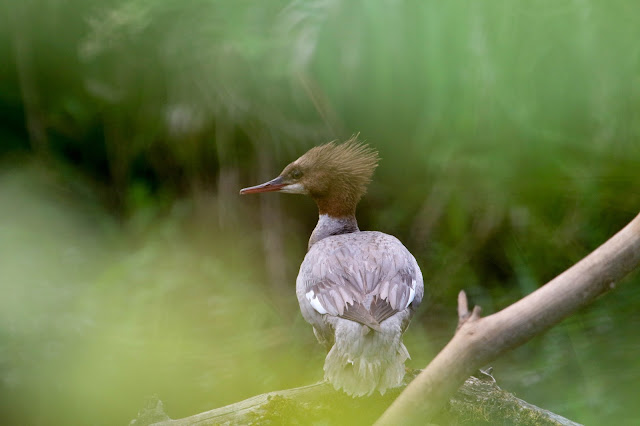 One of a pair of Common Mergansers 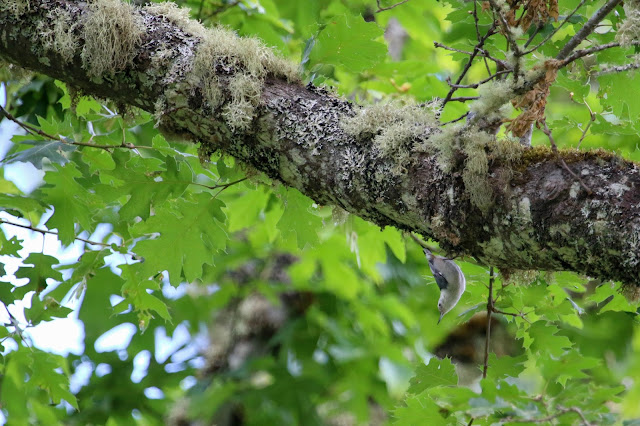 White-breasted Nuthatch, one of several in this tree

Not pictured:  three Black Phoebes.  I highly recommend this spot if you're down this way.

After that I drove back to Portland.  It was a fantastic trip overall, with so many fun birds to fit on so many dumb lists.  A million thanks to Russ for taking the time to show me around Jackson County, getting me amazing looks at my lifer Spotted Owl, and for recommending the camp site with the Flammulated Owl!!!  Good times!!
Ash-throated Flycatcher California Towhee Common Merganser Oak Titmouse Red-shouldered Hawk Rufous Hummingbird Spotted Owl Spotted Towhee White-breasted Nuthatch Yellow-breasted Chat