My spring has been pretty great and it's not only because I've done so much traveling around the state.  I also have a sweet yard with its own set of flora and fauna that entertains me to no end.  Let me begin with a story.

I bought my house three and a half years ago, and the front yard was mostly grass with some border garden beds, a Japanese maple, and a sad dogwood tree.  My first trip to Portland Nursery as a homeowner was overwhelming but I stuck to the native section and came home with a nice little variety to add to the front. 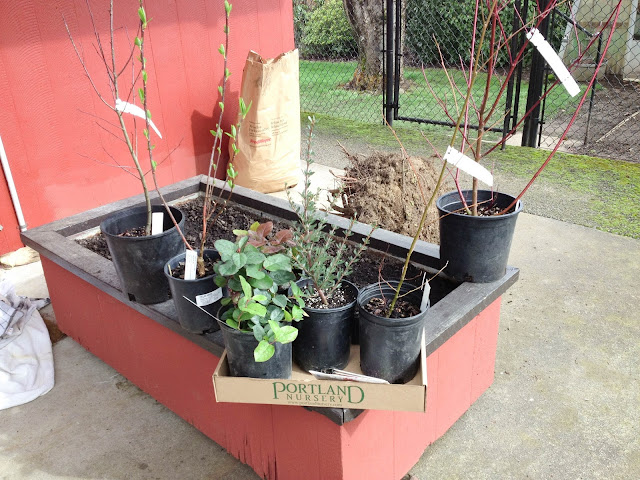 I knew little about these plants, only that they were native.  The alder was maybe three feet tall, a skinny twig that cost me $7.99. 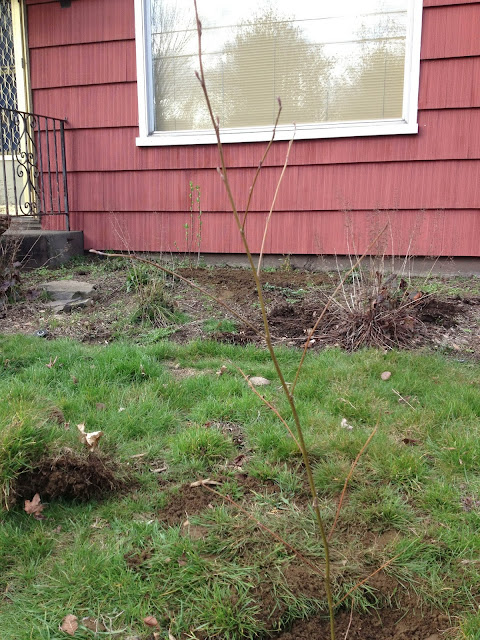 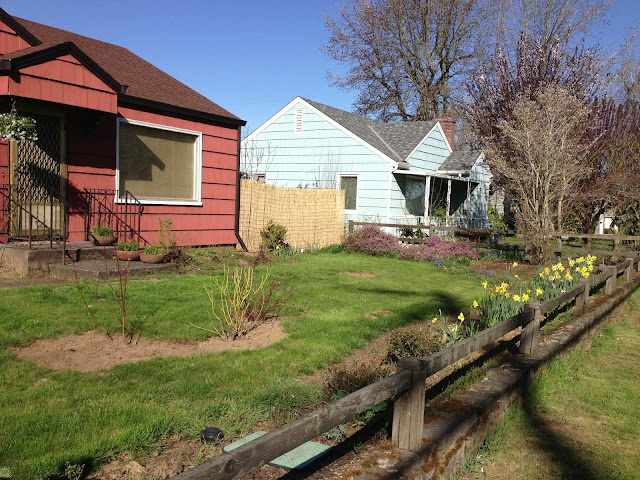 It's been three years now since I planted these, and my skinny twig alder has shot up above the house with branches thick enough to climb.  This spring I did just that to hang a chickadee house. 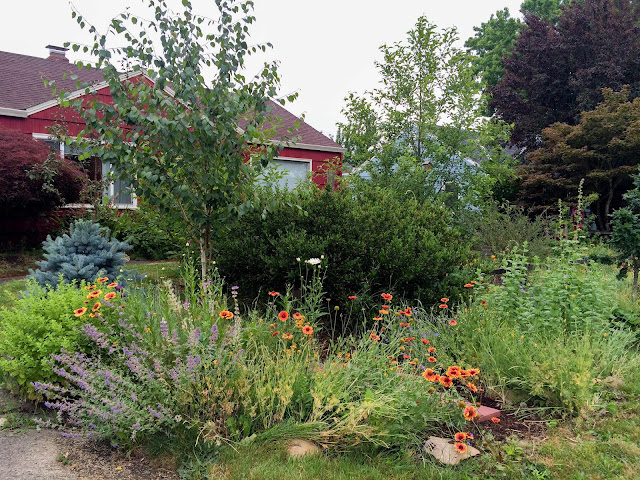 The chickadees found it almost immediately and began moving in. 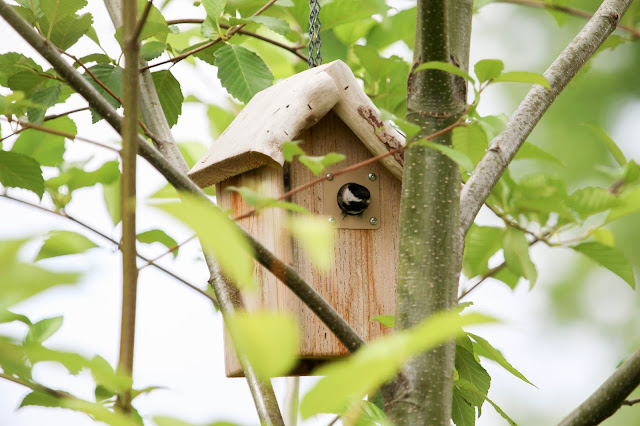 The House Sparrows were not pleased with the new neighbors and were constantly bugging them, trying to get inside the house.  Thankfully I had put a metal protector around the hole so the sparrows could not fit. 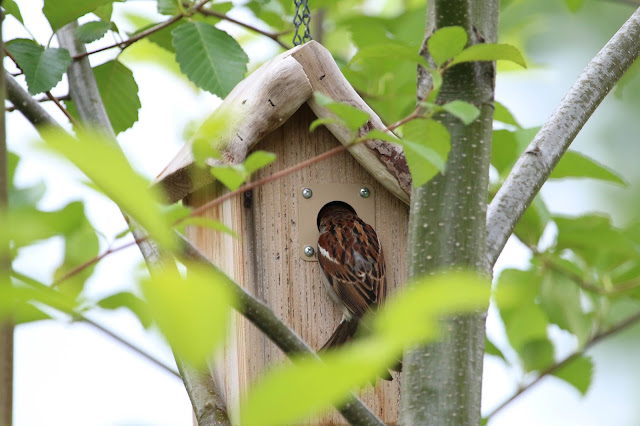 Once there were audible young in the nest, the local scrub-jays also showed interest. 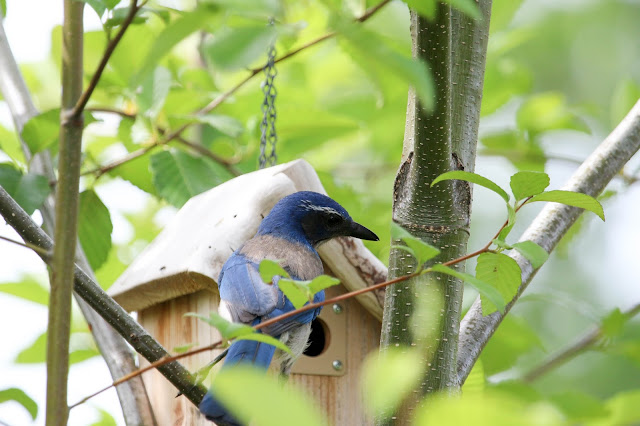 The chickadees were determined and never let the annoying neighbors get to them.  They made trips all day long from the suet or the compost bin (bug city!) back to their house. 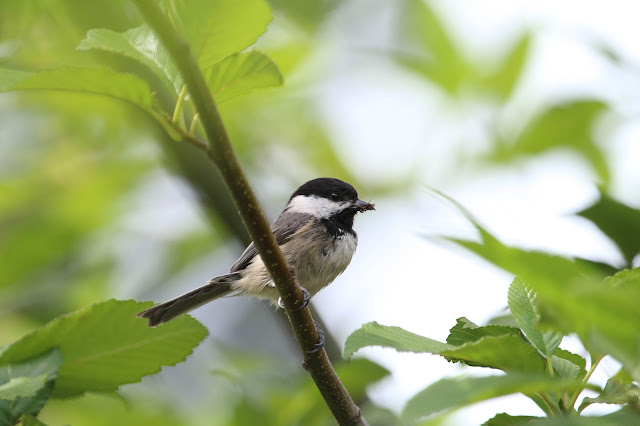 Last week I noticed they weren't returning to the house anymore, but I wasn't sure if they had been successful.  On Friday when I came home from work I heard the fuzzy not-quite-right sounds of a young chickadee and I watched as one of the parents fed it some suet.  Yay!  The chickadee child tried to land on me at one point, but I ducked and it landed nearby on the fence instead. 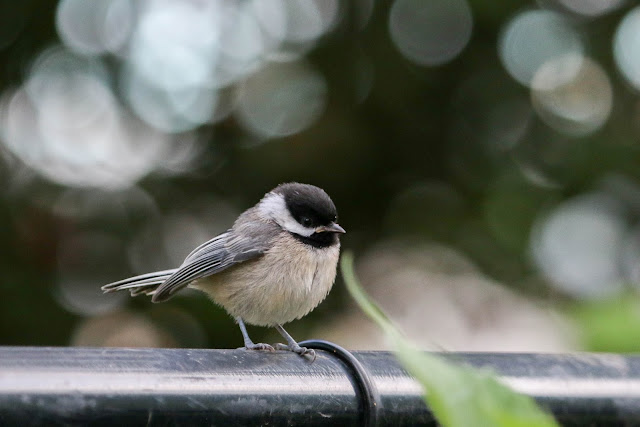 This morning I decided to open up their house and check out their nest. 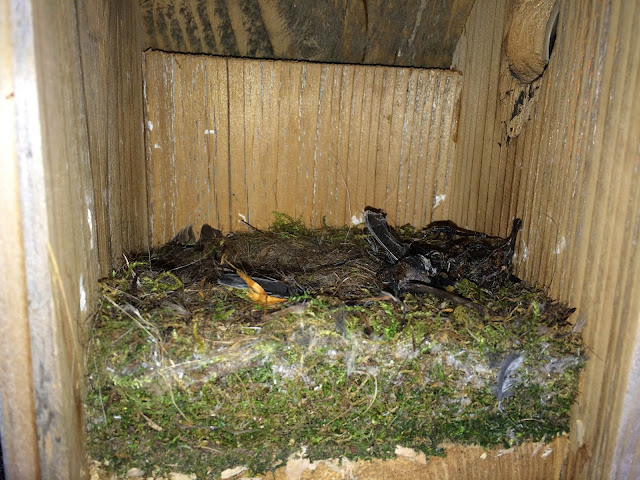 On the left is a cozy little cup of a nest, and on the right is one dead baby chickadee.  I removed the dead one and hung the house back up in case they want to go for another round. 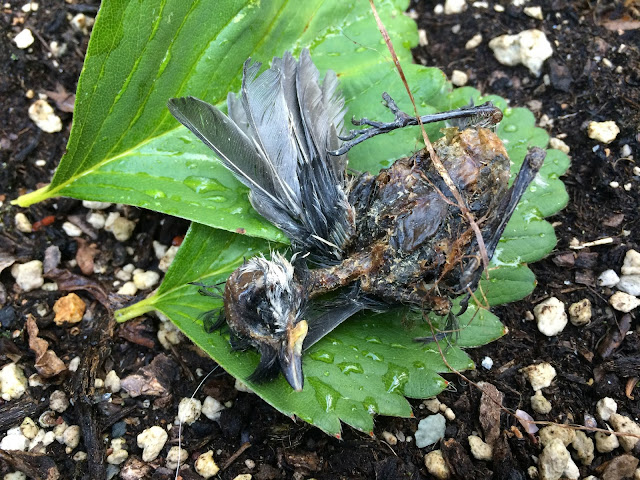 I feel pretty good about these chickadees.  It's like watching hummingbirds visit the currant I planted, sparrows digging in the leaf litter I saved for them, or crows splashing in the bird bath I filled.  Of course with nature you can't always control who shows up for your offerings... 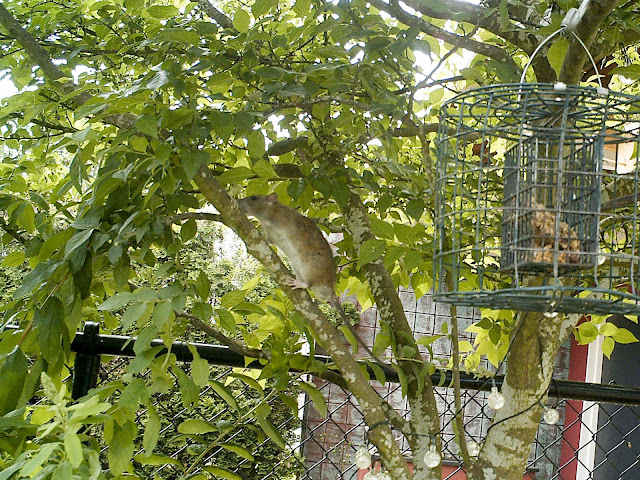 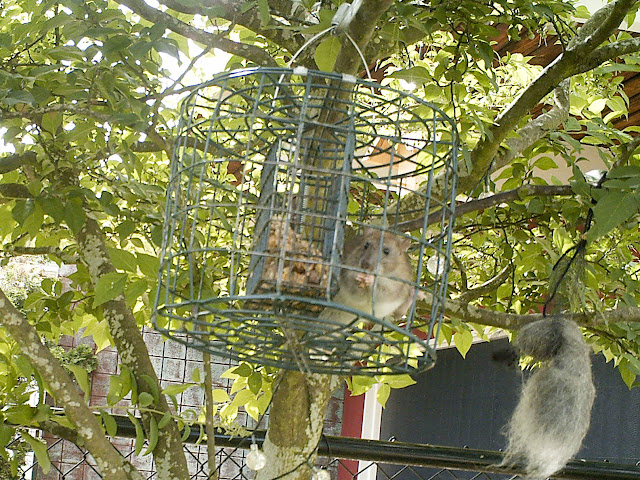 He or she was quite comfortable up there in the cage, chowing down for over thirty minutes in the middle of the afternoon.  In addition to the rat were the more expected Bushtits, chickadees, and Downy Woodpeckers. 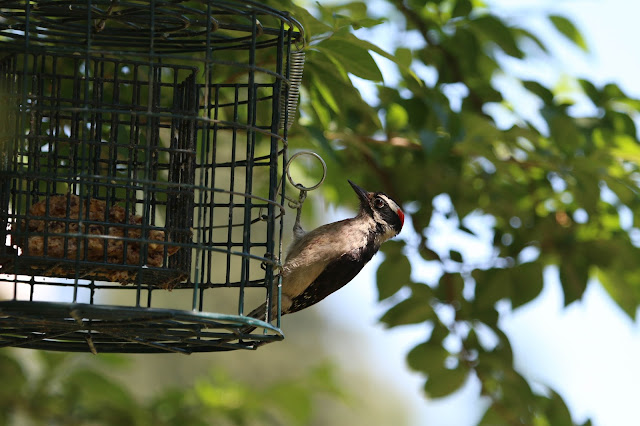 Not from the camera trap

While I have a boring old rat, my parents have a far more interesting mammal visiting their yard in Massachusetts, an albino chipmunk! 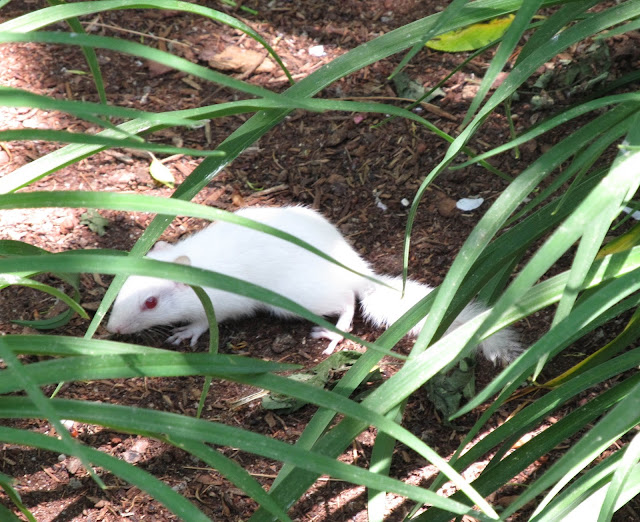 Now let's talk bugs.  My yard is full of 'em and I never get tired of creeping around looking for new ones.  Here are a few of my favorites of late: 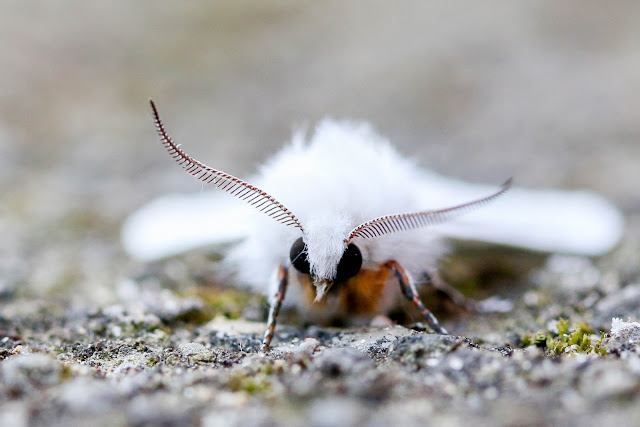 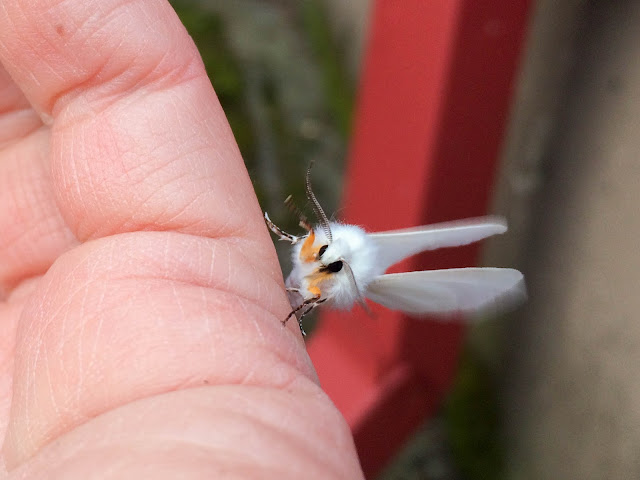 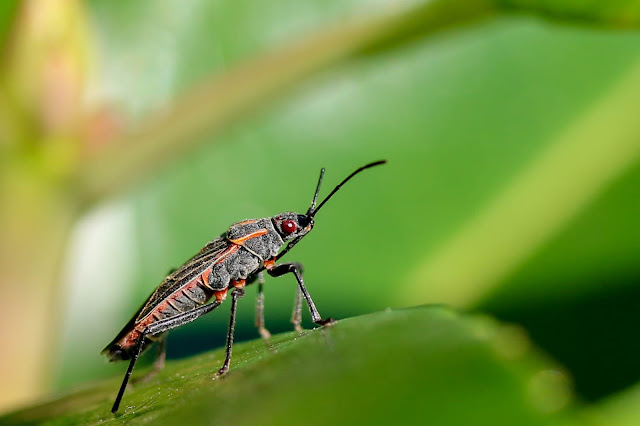 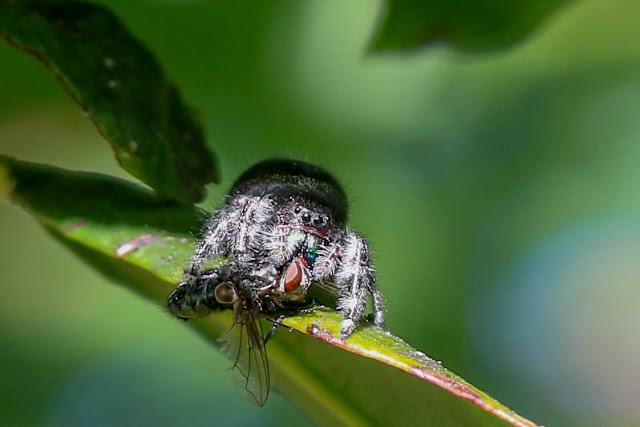 Bold jumper with a dead fly 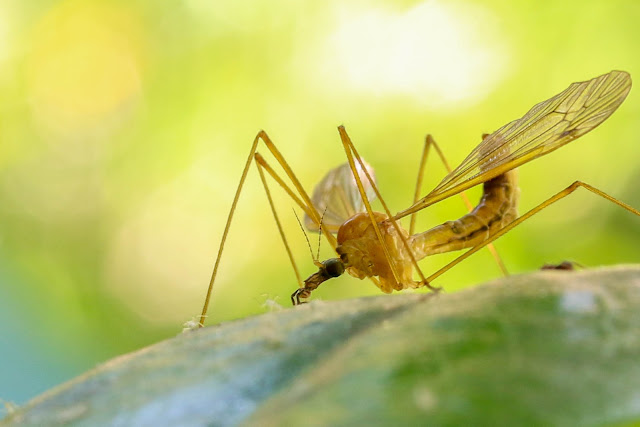 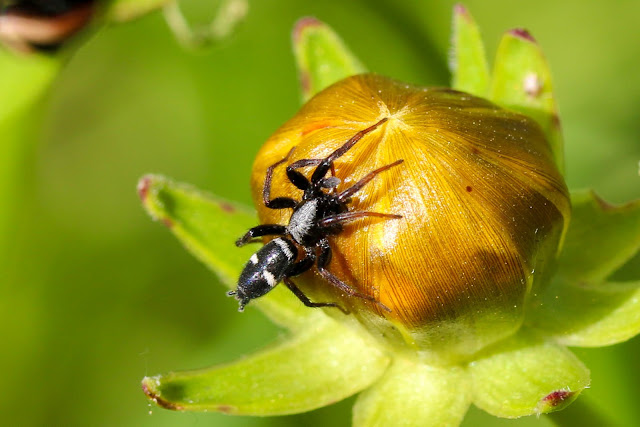 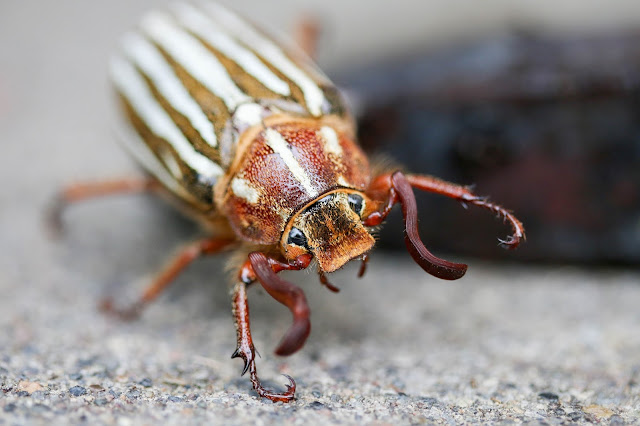 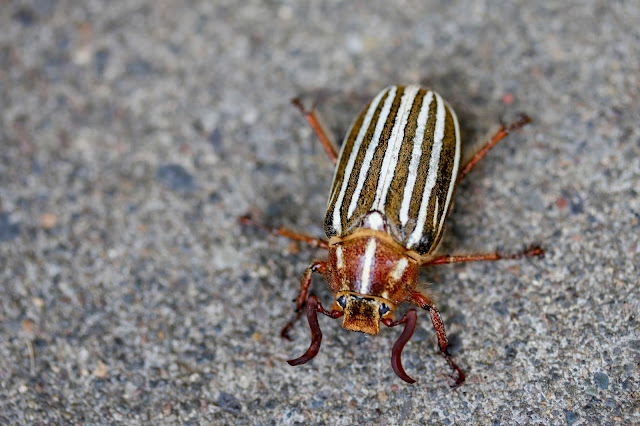 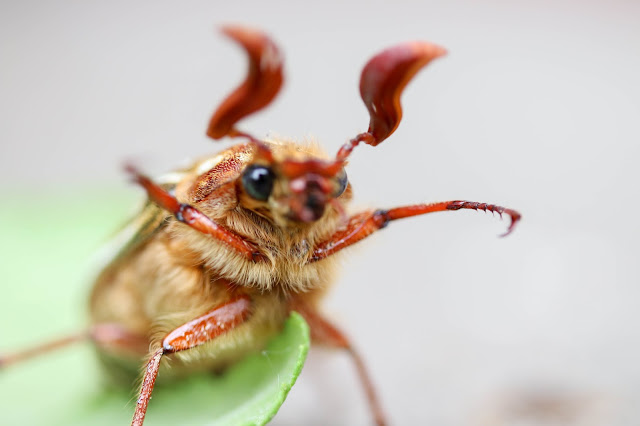 Same beetle, about to take flight