on August 14, 2016
On my weekend (not yours) I returned to Mount Rainier with Audrey to try once again to prove that White-tailed Ptarmigan exist.  We had a new location to try, the Spray Park Trail, on the northwest side of the mountain, and so we drove up there Tuesday afternoon.  The only campground nearby is on Mowich Lake, right at the trail head, and knowing there were only so many spots we were eager to arrive and claim some space. 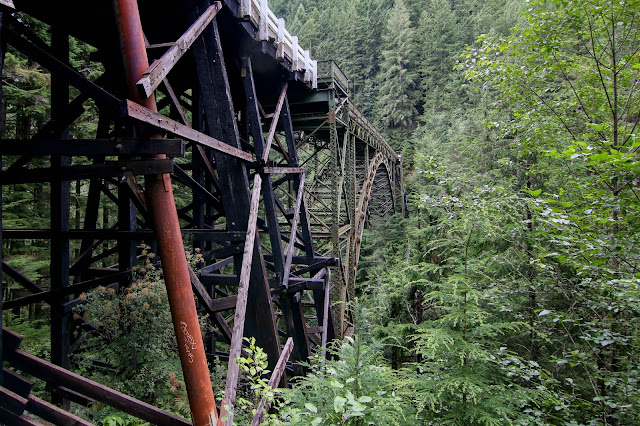 On the main dirt road into the park we caught sight of a flock of birds.  A quick scan turned up a couple of Evening Grosbeaks among a bunch of waxwings.  We gave in and got out to see what else was happening and found Townsend's and Black-throated Gray Warblers, a random Great Blue Heron flying high overhead, and other things I cannot recall.  Cars were passing us and we started to worry they were going to take all of the camp spots so we abandoned the birds and powered ahead.  We passed about four cars along the way, all of whom had no idea how to drive on a dirt road (hint: not 5 mph) and made it to the campground by 3:30.  There were plenty of spots and we nabbed a couple and made vague plans to take a hike by the lake.  But then George happened. 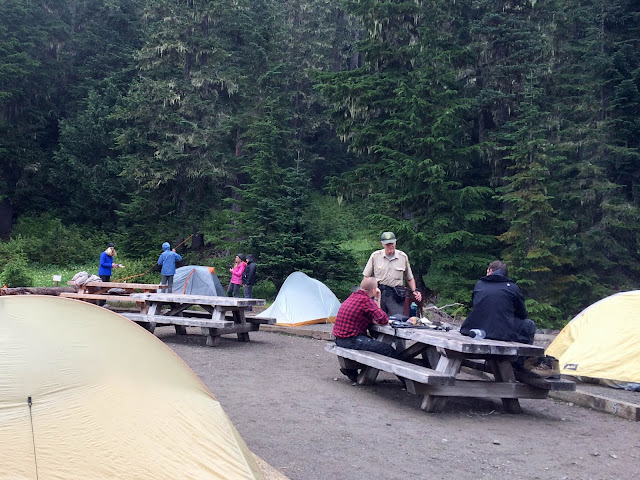 George appeared in the campground via the Spray Park Trail and Audrey ambushed him with questions about ptarmigan.  He told her he had just seen some.  By the time I caught up he was whipping out his camera and showing photos of a hen with three chicks.  HEN WITH CHICKS.  Screw the lake, we packed our bags and got on the trail by 4:30.  George said they had been at "the top" and that he would not have seen them if the chicks had not been calling.

There was a misty rain thing going on, and in our determination to get to the top we decided on a "no stopping, no looking" rule.  Flowers shmowers, you're not ptarmigans.  I snuck a few photos here and there anyway. 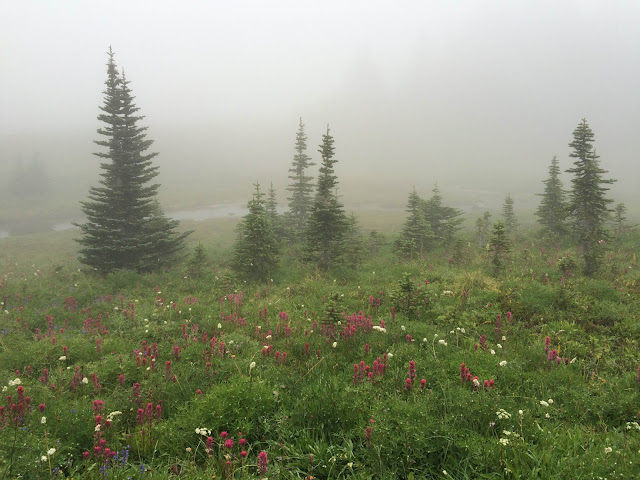 The hike to Spray Park is three miles.  This means nothing when you don't what Spray Park looks like, and there are zero signs to indicate you have reached it.  We hiked beyond what must have been Spray Park (the last sign was .8 miles away and we went quite a bit further than that).  Up and up, up a million steps gaining over 1600 feet in elevation.  We reached what we thought was the top, an area that looked like fantastic ptarmigan habitat. 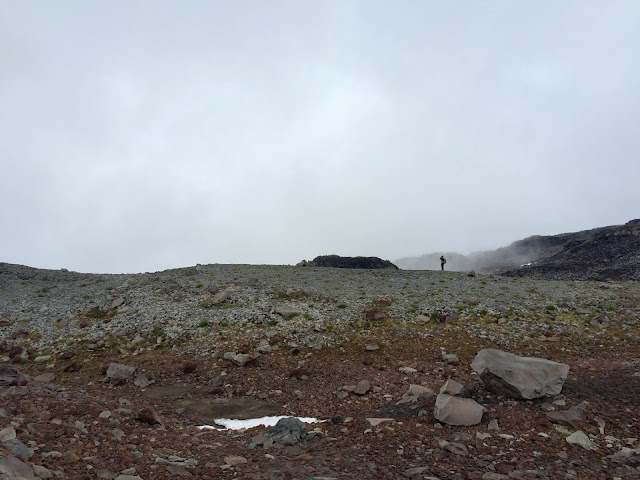 We searched all over this area before deciding we should head back down.  The last two miles of the hike were in the dark plus fog which is fantastic for headlamps.  At least there was a frog. 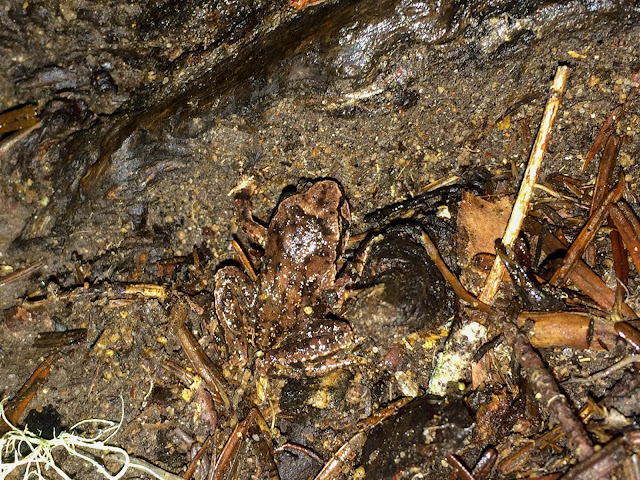 By 9:45 I was cozy inside my sleeping bag, ready for a sleepless night.  In the morning I made coffee and we were back on the trail to do it all again at 5:42 a.m.  The amazing thing was that the clouds and fog had cleared quite a bit and we were able to actually see the mountain all morning.  We also decided we were allowed to stop and look at flowers on the way up, and keep a slower pace in general. 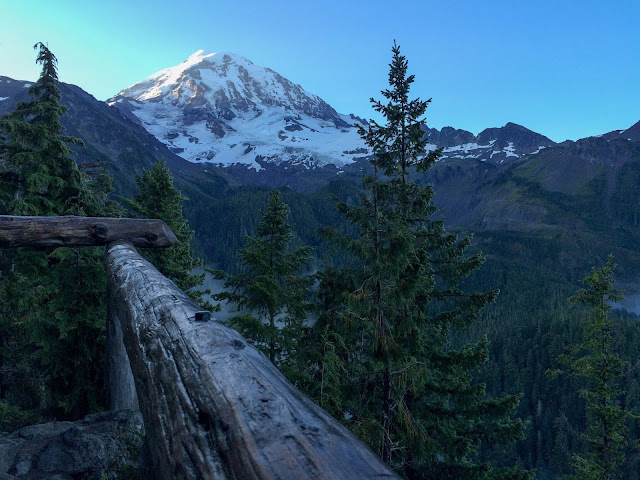 Up in the meadows we began to get fantastic views of wildflowers and the mountain and other cool cliffs and things that had been obscured by fog the day before. 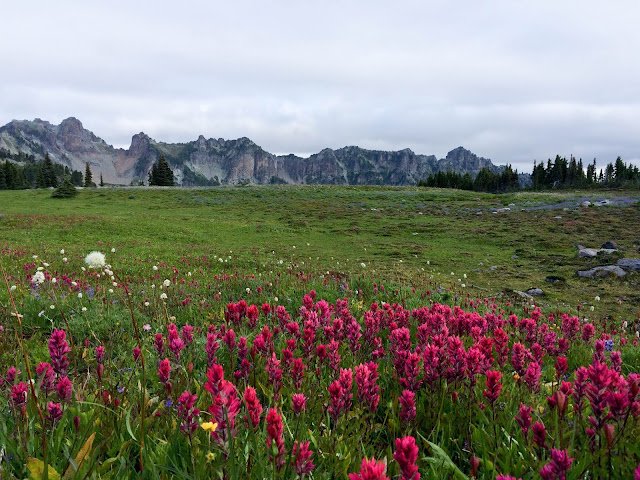 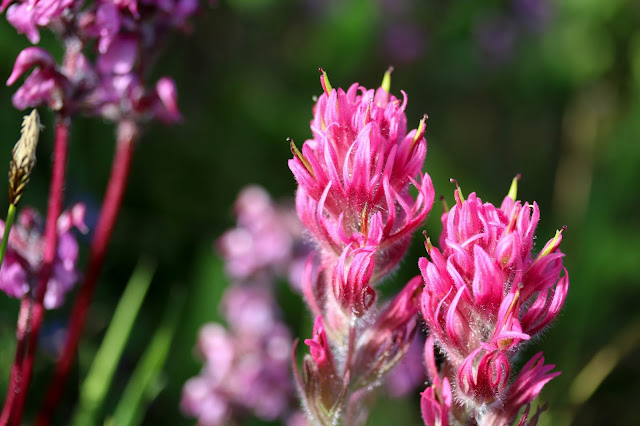 We were treated to at least four species of Pedicularis, aka lousewort. 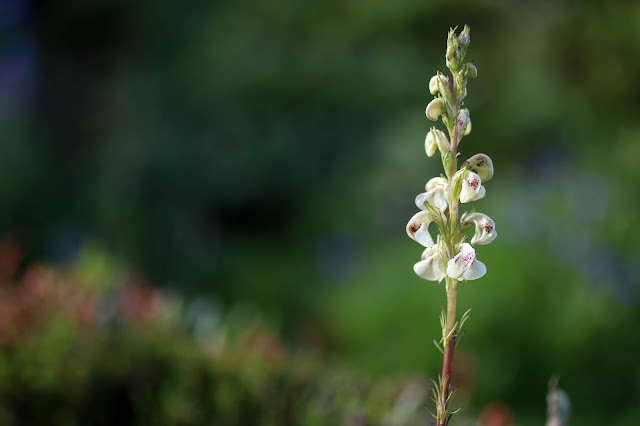 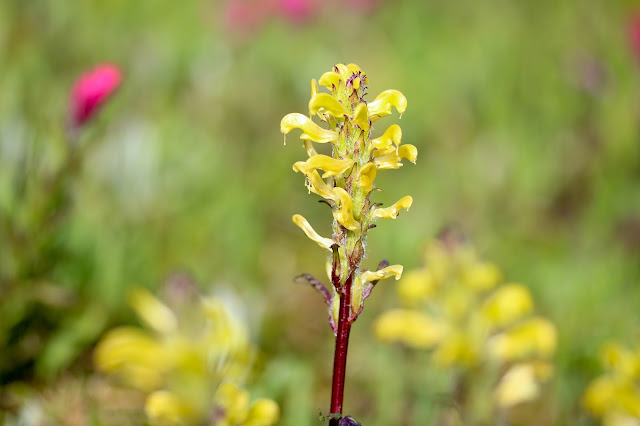 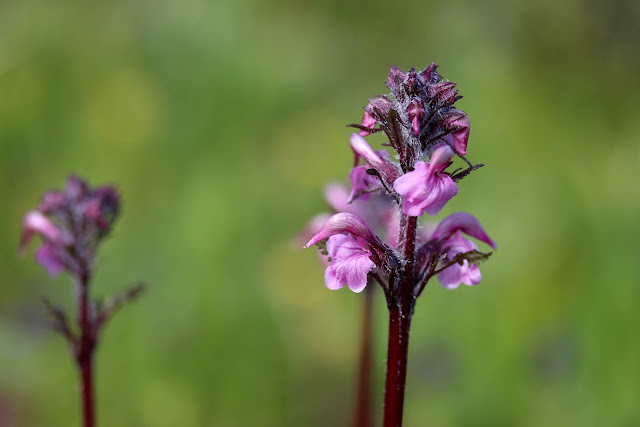 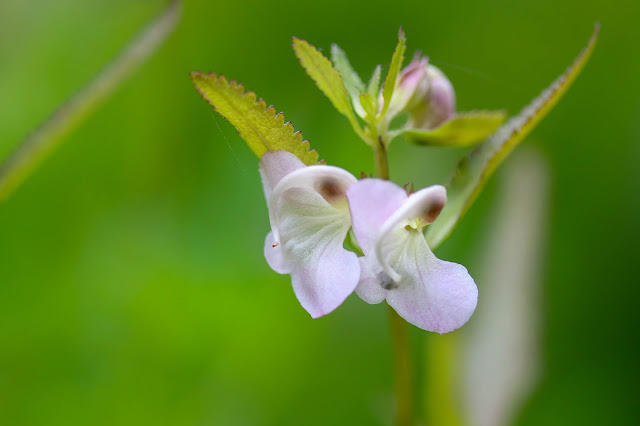 ALL of the lousewort!  And some veronica: 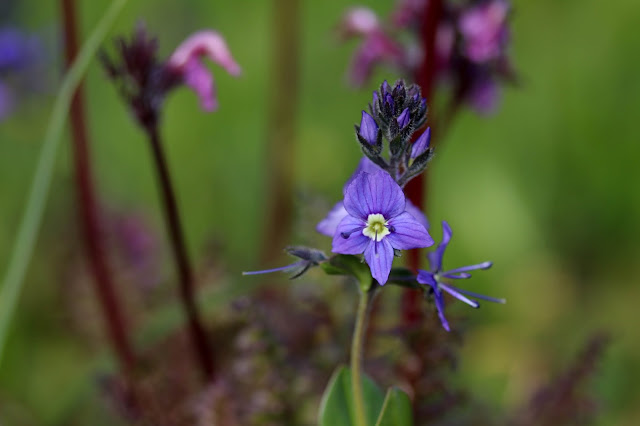 We made it to the top yet again and spent hours scouring the area.  We split up a few times, and covered a hell of a lot of ground, but it was not meant to be.  The ptarmigan were never found.  The only bird I photographed on this trip was a Prairie Falcon that kept pissing off the pikas and marmots with its existence. 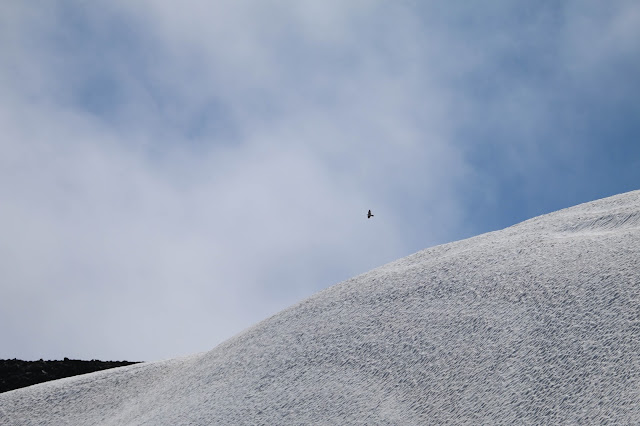 There is no shortage of good habitat for ptarmigans and those birds could have been anywhere.  Sigh. 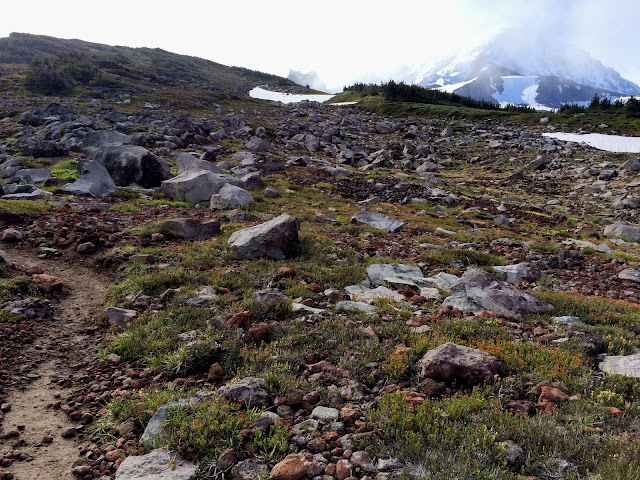 A fog was rolling in and we eventually called it.  As we descended we heard many rumors of a bear (or two) and were excited for a potential sighting, but we missed it (or them).  The thickening fog did not help. 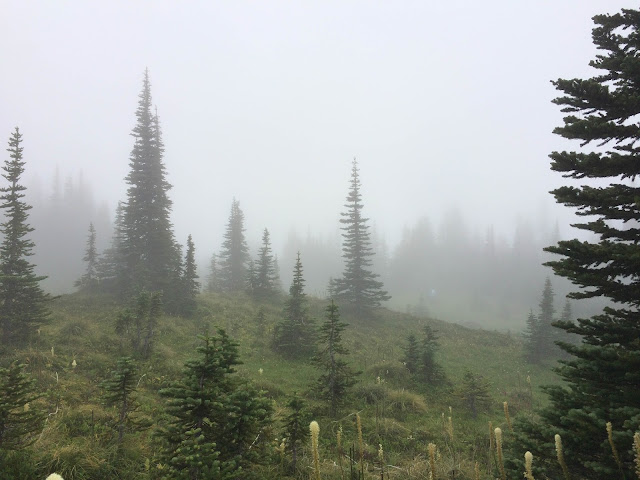 It did make the trees look cool, though, especially towering over a pleasant mossy waterfall. 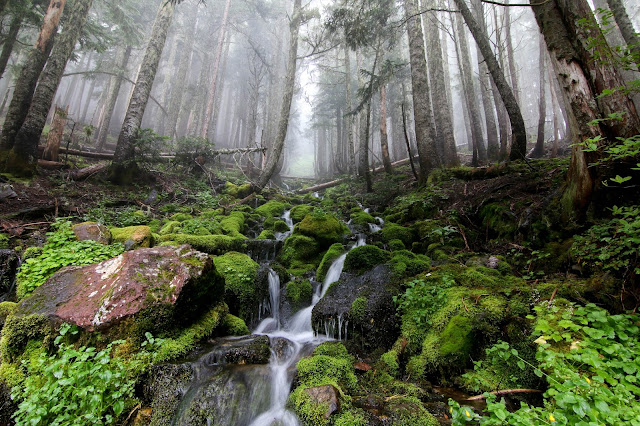 The last couple of miles we had already hiked three times, though twice it was dark or dark-ish, and once we were not allowing ourselves to stop.  We hadn't noticed all the nifty parasitic plants! 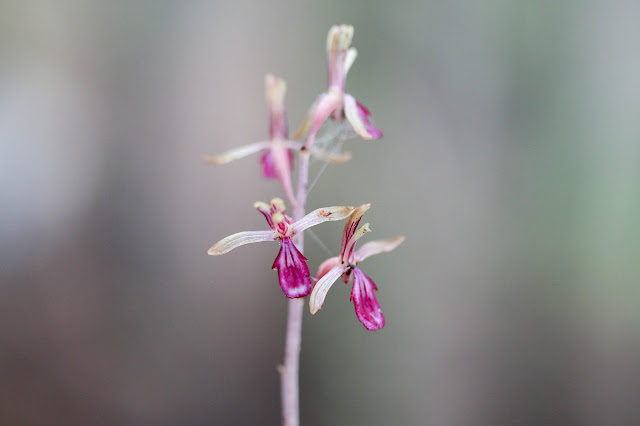 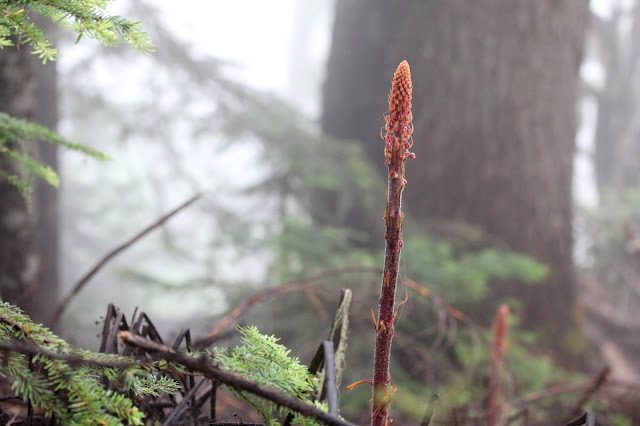 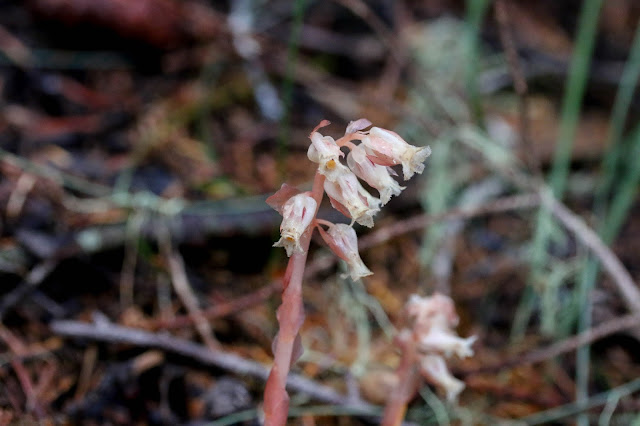 Eventually we made it back to camp to pack up, grateful we were leaving as my new next-door neighbors included two screaming kids.  I think we were back on the road by 4:30.  The day's 10-hour eBird checklist had less than ten species.  Despite the lack of chickens (and bears) and the endurance-testing hikes, it was super fun with lots of awesome plants and flowers.  Good times!!
Prairie Falcon