on November 02, 2016
Oh look, another blog post.  I think this means I officially un-quit blogging.  For now.

A couple weeks ago my friend Sunni and I met about halfway between our homes in the fine NoCal City of Crescents.  I took the regular route of I-5 to Grants Pass, then Highway 199 the rest of the way.  It was rad.  The TJ Howell Botanical Drive sounds like it would be amazing in the spring/summer, and I'll have to return next year.  I was psyched on the little Darlingtonia bog near Gasquet too. 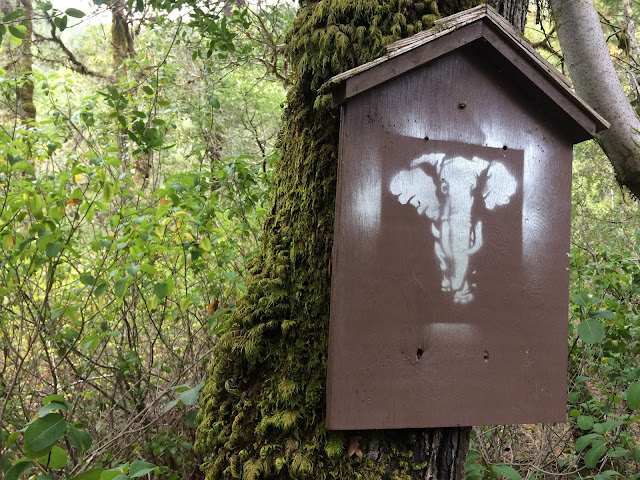 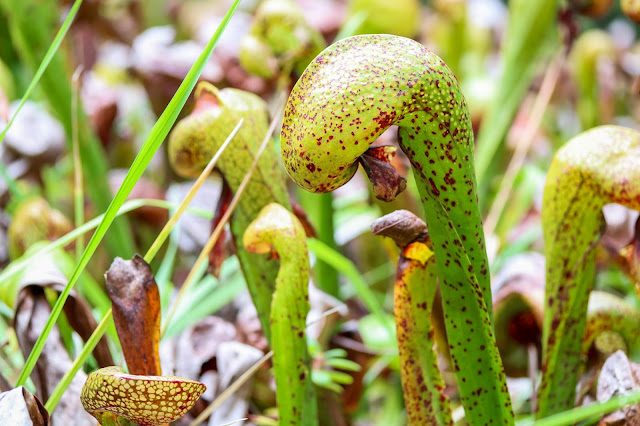 I pulled into town and picked a random birdy-sounding spot on the harbor, the B Street Pier.  Sunni arrived maybe 15 minutes after me and we began exploring. 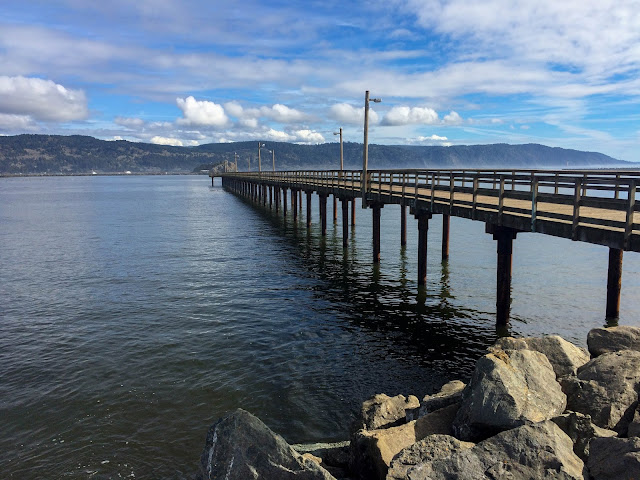 A phalarope was swimming way out there, getting my hopes up for a Red Year Bird variety, but the skinny bill told me it was a Red-necked. 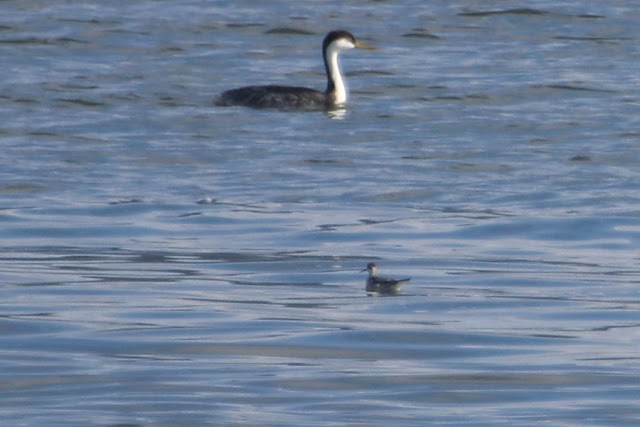 Red-throated Loons were abundant in the harbor and a couple were calling to each other, something I don't recall hearing before.  It was endearing to say the least.  At the entrance to the pier there is a large rock in the water and it was smothered with Surfbirds, Black-bellied Plovers, Black Oystercatchers, and Dunlin.  Bad photos of all were delivered to my trash bin.

We wandered over to a very tempting jetty with many warnings.  We walked a little ways out before retreating to safety. 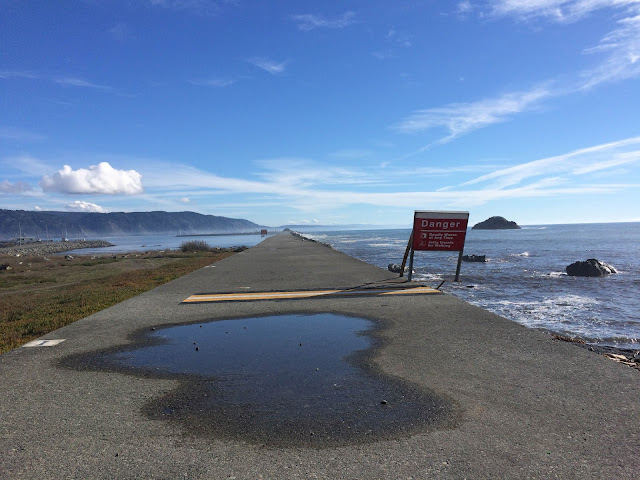 This is only interesting because on our last full day in town we watched two sheriff dudes on jet skis searching the area along the jetty, presumably for someone who had washed off by the waves crashing over it.  They returned to the boat launch without a body. 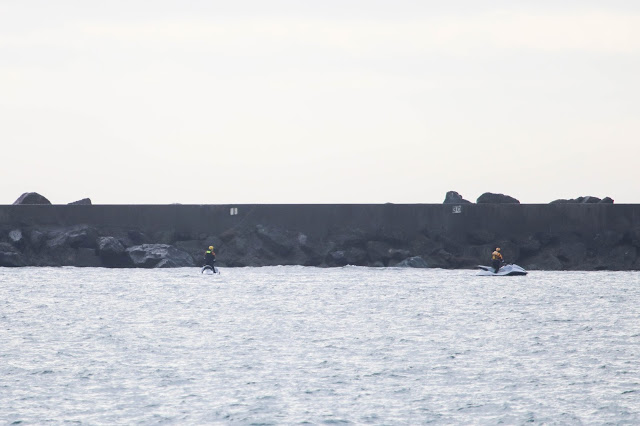 From the harbor we drove up to Pebble Beach Drive to check in to our rental house, complete with ocean views. 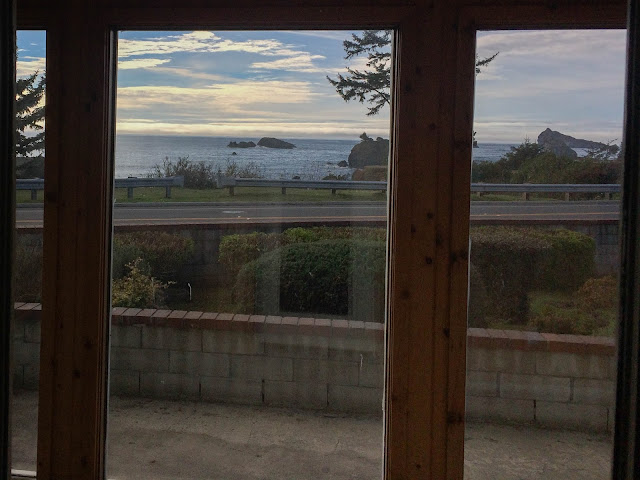 Later that evening after dinner we walked down to "our beach" to poke around the rocks.  Crabs were out in abundance, like this striped shore crab: 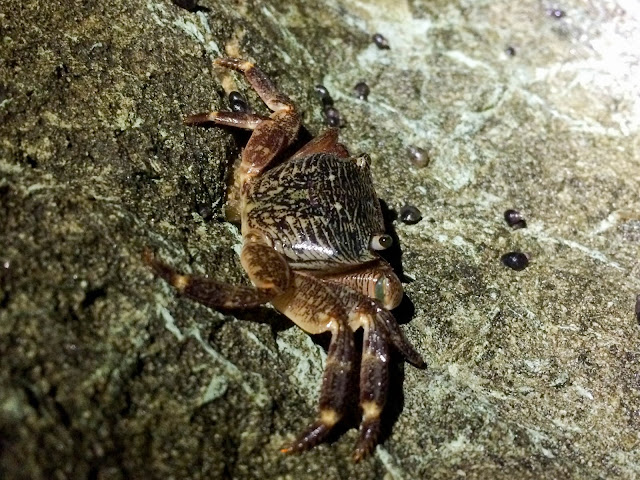 I attempted some long exposures while we were down there. 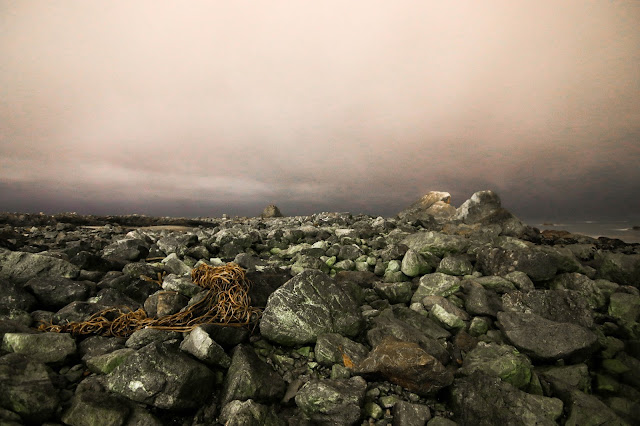 The next morning we woke to fog and rain, as we had anticipated.  Nearby Battery Point Lighthouse can only be accessed during low tide, and our best opportunity was that morning, so we acquired hot beverages and braved the weather. 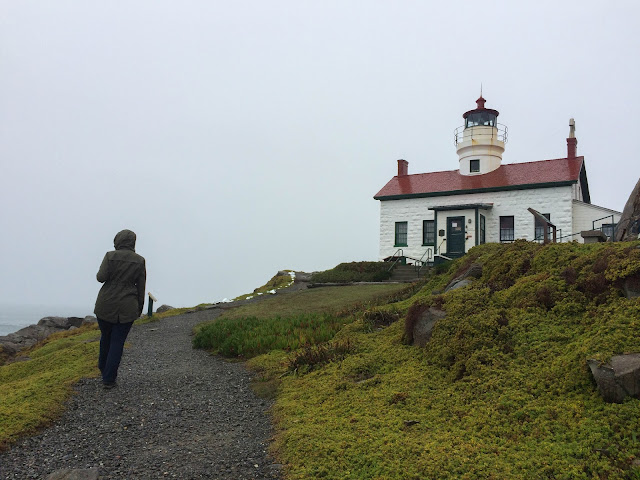 Black Oystercatchers were abundant here, which made the wet and windy walk more tolerable.  From here we headed to Enderts Beach for actual low tide because I had read the tide pools here were the best in the area.  The fog and rain held strong while we hiked out of the trees and down to the beach. 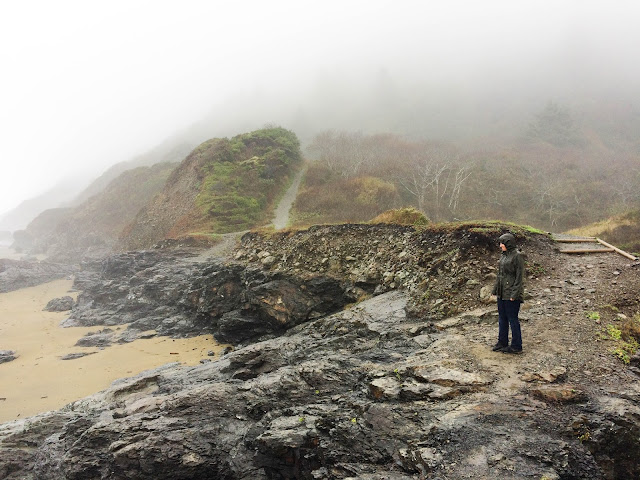 Before reaching the tide pools we came across an upside-down sea star which I later identified as a leather sea star. 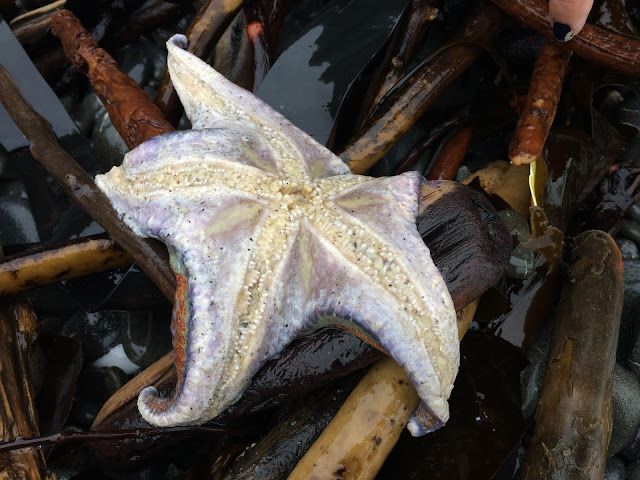 We flipped it over because it seemed wrong for it to be that way, which is hopefully not a dick move. 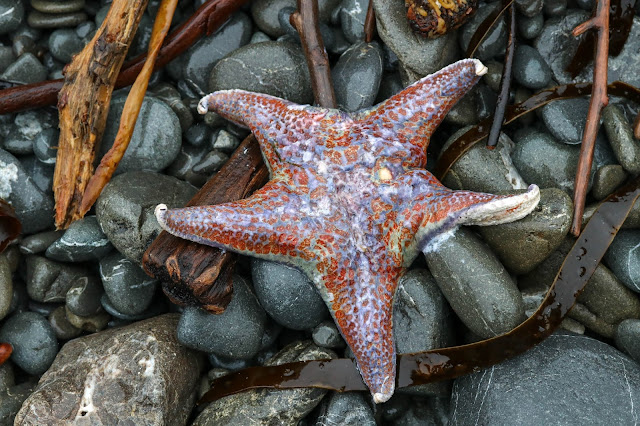 We eventually arrived at the pools where the tide abruptly switched directions and we only had a short time to enjoy them safely. 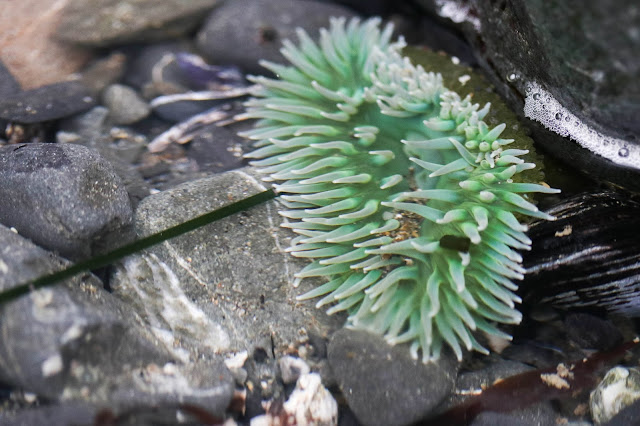 On the walk back along the beach we studied these little oval jelly-ish things that were everywhere. 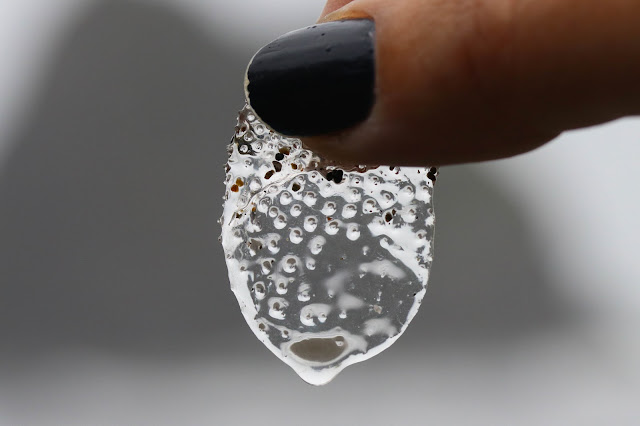 I found more new things on our walk back, some gooseneck barnacles!  I had never seen anything quite like them before. 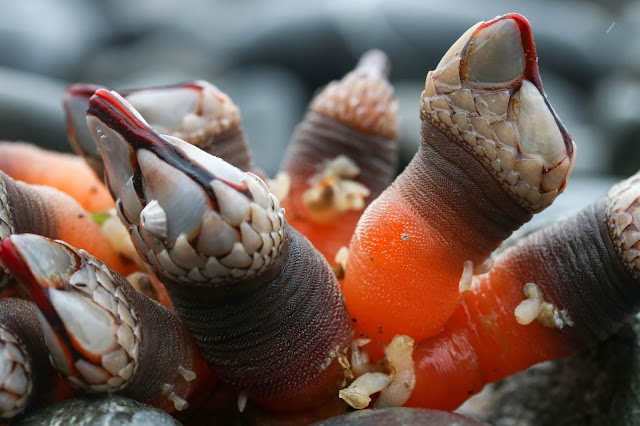 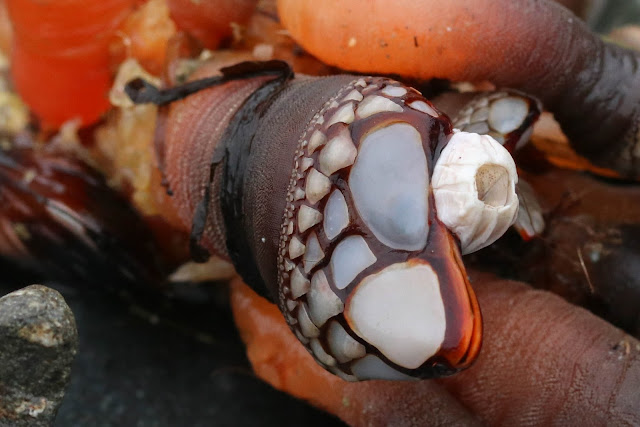 The foggy return hike through the trees turned up a bright red red-legged frog, sitting calmly with a pine needle stuck to its head while we took a bazillion photos. 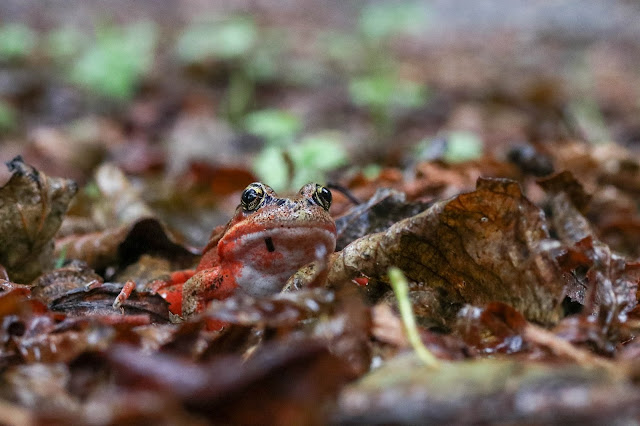 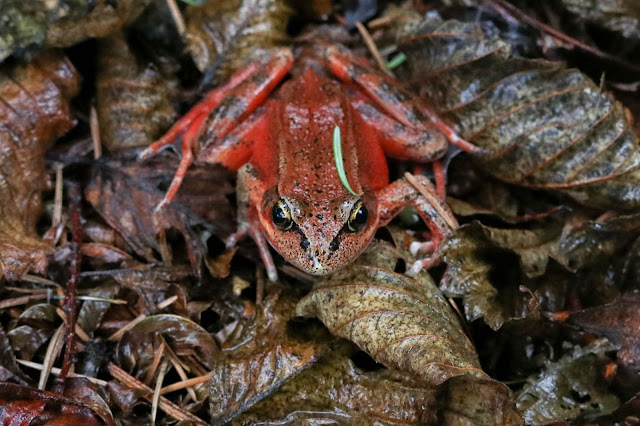 I'll save the rest of the trip for next time (assuming I don't quit blogging again).  Good times!! 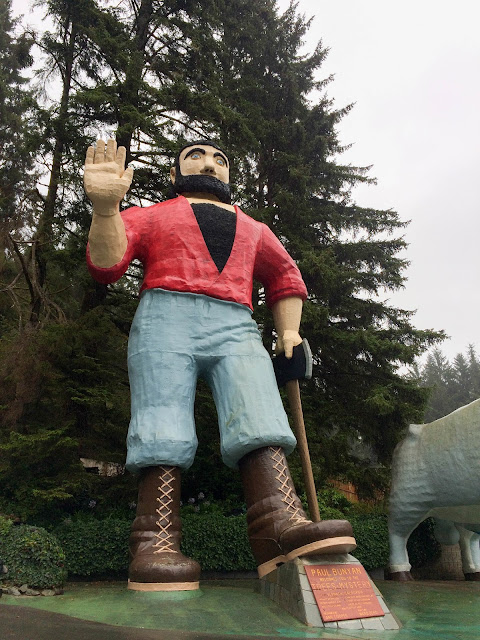