on November 04, 2016
We drove south from Enderts Beach, stopping to dry off a bit with lunch and beers at what we thought was just a convenience store, arriving at Prairie Creek Redwoods State Park in the early afternoon.  Fern Canyon was our destination, a famous spot featured in one of the Jurassic Park movies.  This is a popular area, but on occasion we could block out the rest of the visitors and enjoy the dripping greenery on the 50-foot canyon walls. 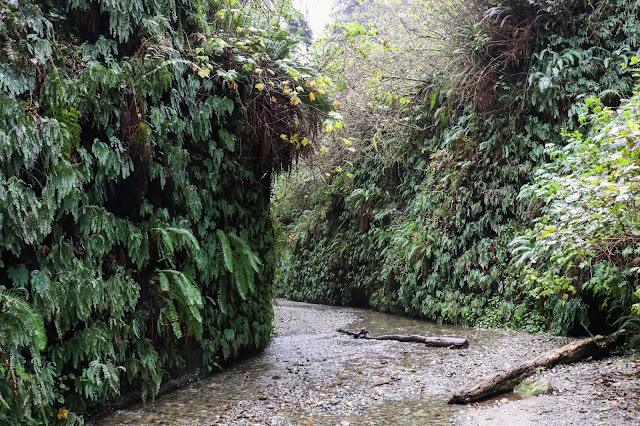 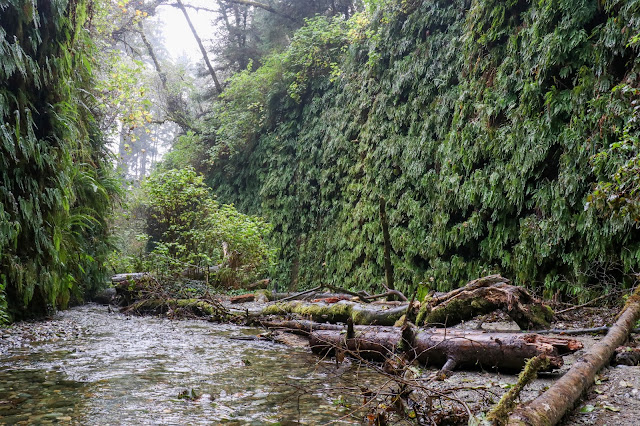 Sunni pointed out a bird I had not noticed, an American Dipper. 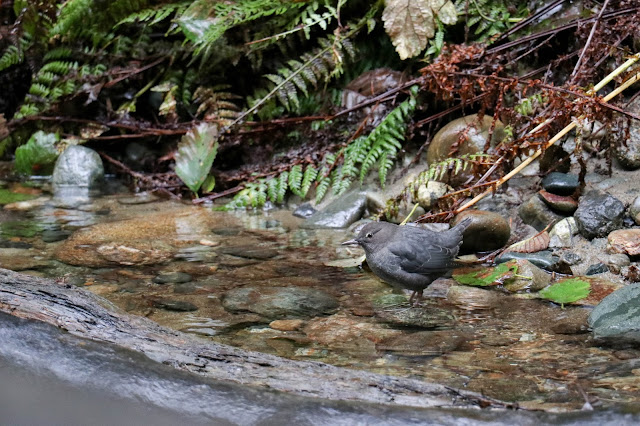 The canyon was great but to get away from the crowds we took a random trail off into the woods.  We were denied salamanders but a little frog sat still for a bit.  I have yet to identify this one. 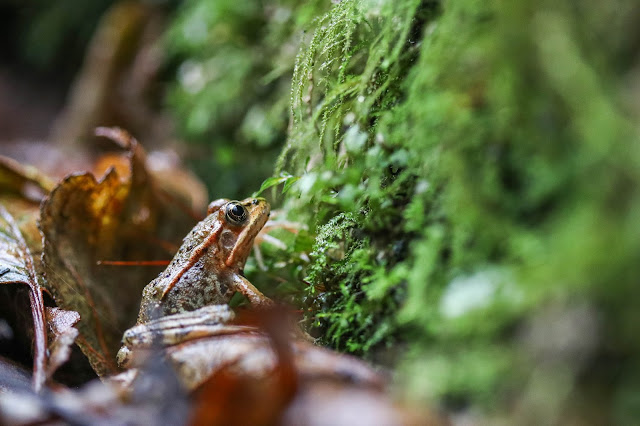 Back in the parking lot I looked up the road and noticed birds were bathing in a puddle.  I was guessing they were robins, but as I approached I realized they were Gray Jays.  Lifer bathing situation. 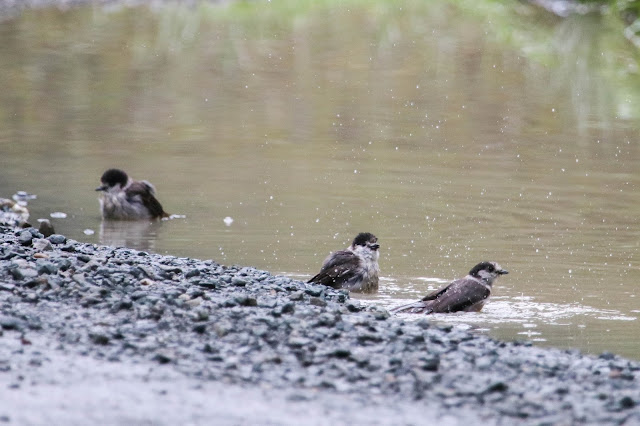 On the drive out several elk were grazing along the side of the road, stopping traffic.  We saw more later on some weird rental property.  Most were far away, but a few wandered behind our car. 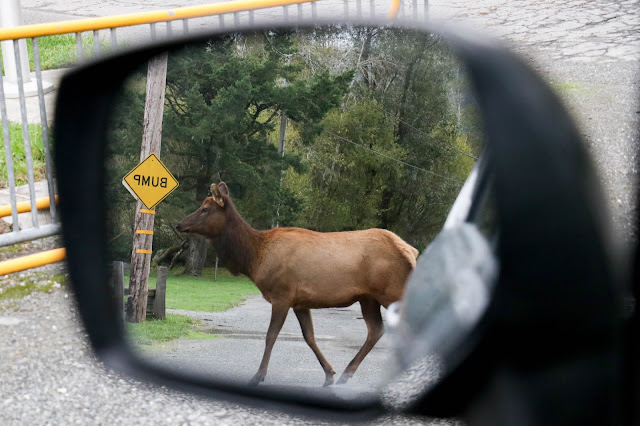 That night after dinner we walked down to "our beach" again, and this time the stars were amazing.  I lugged my tripod on the walk again and went to town on this perfect cypress tree, lit by a nearby streetlight. We spent a lot of time messing around with my headlamp and long exposures, as well as looking for crabs and things.  This time we found a purple shore crab: 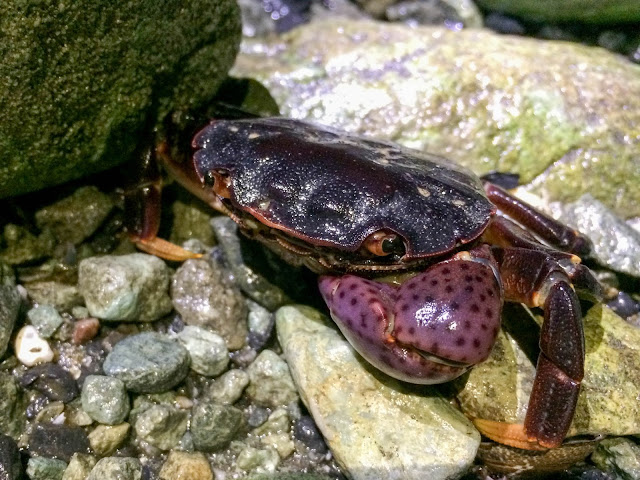 The next morning the weather was mellow with no fog and even some sun peeking out here and there.  We drove out to Jedediah Smith Redwoods State Park to check out a few trails. 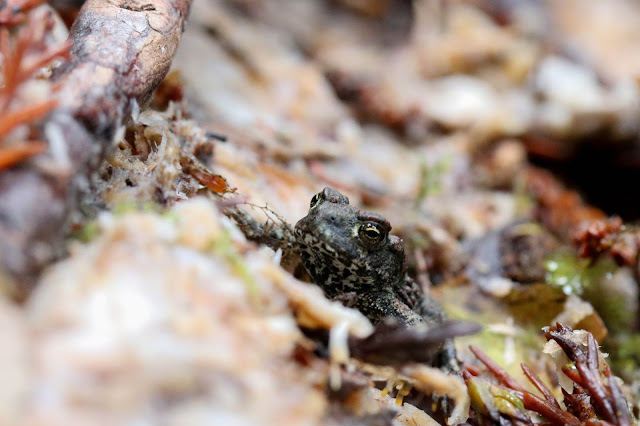 Using a California herps website I tentatively identified this as a juvenile boreal toad.  The range map looks good, as do the photos.  I am open to other opinions! 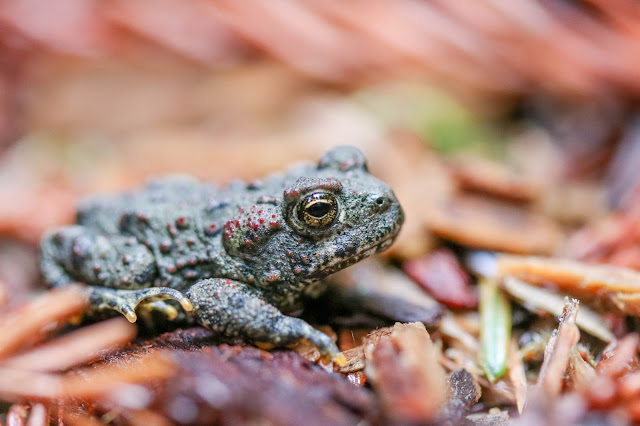 And in case you didn't get the fact that this critter was tiny... 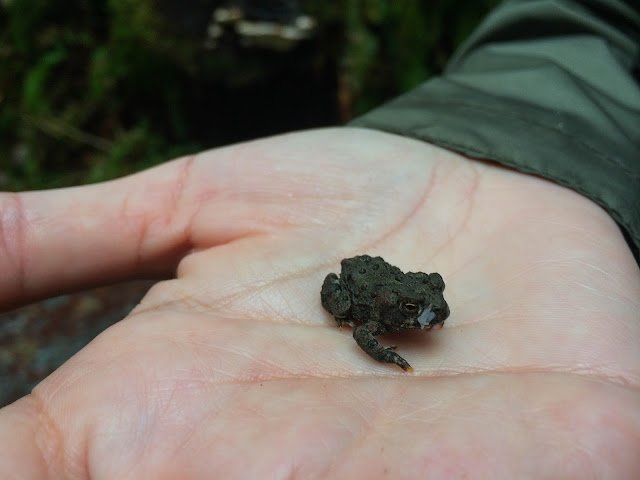 We found some trees too. 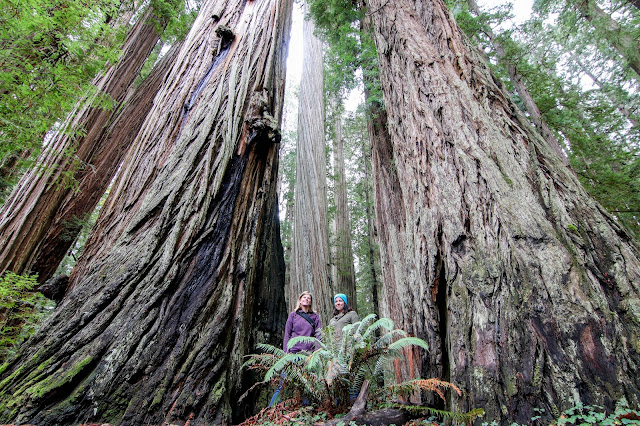 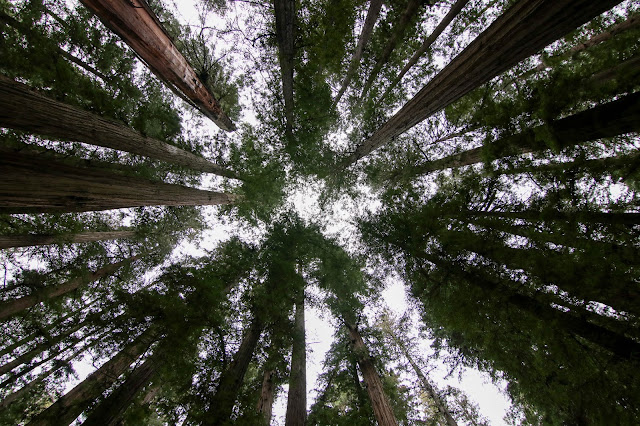 Back in Crescent City that afternoon we explored more of the harbor, climbed around on Whaler Island, watched the jet ski search at the jetty, and generally had a mellow afternoon of poking around. 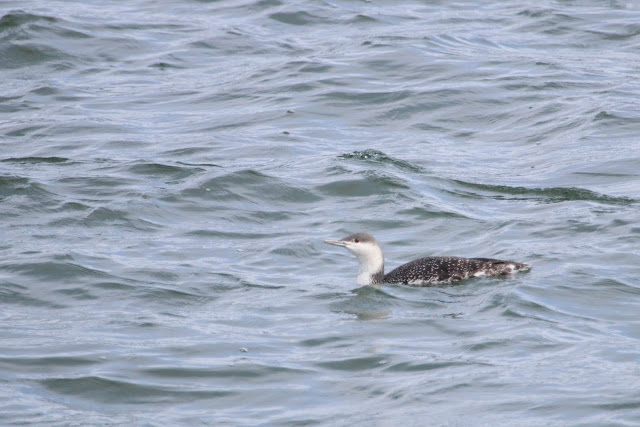 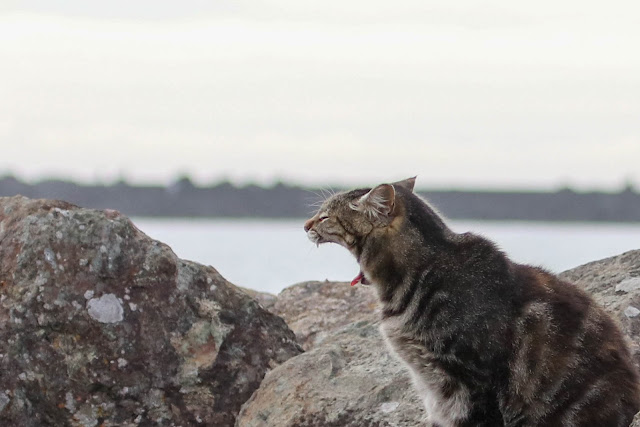 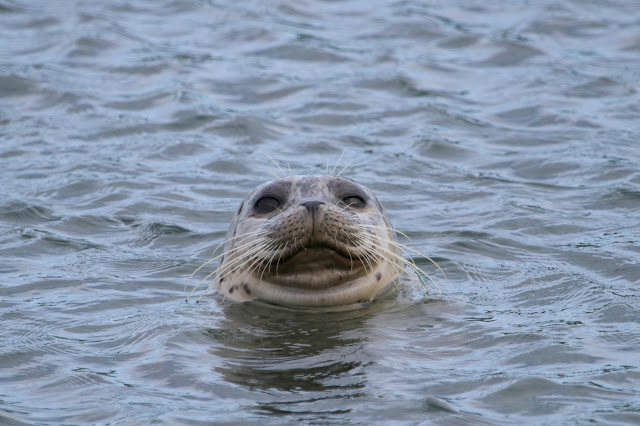 We went down to our beach for sunset and I poked this dead seal. 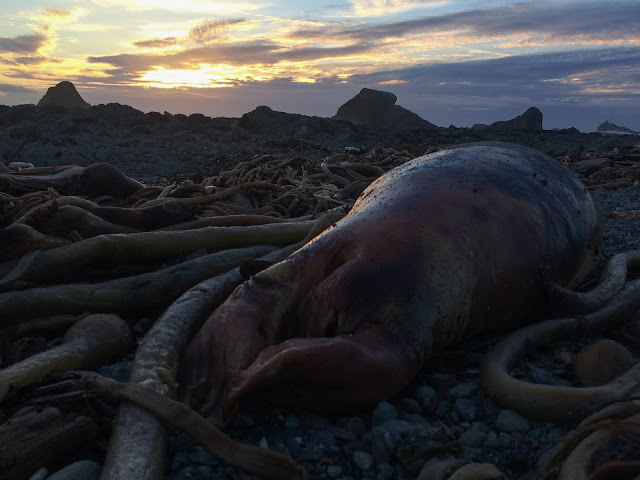 We had dinner at a Mexican restaurant complete with margaritas, watched the Cubs win their spot in the World Series, then walked outside and heard a sound.  A truck sound.  A monster truck rally was happening right across the highway.  The next thing we knew we were running across the road and buying tickets.  They had IPA on tap, and we found an open spot in the bleachers to take in the madness of Crescent City monster truck fans. 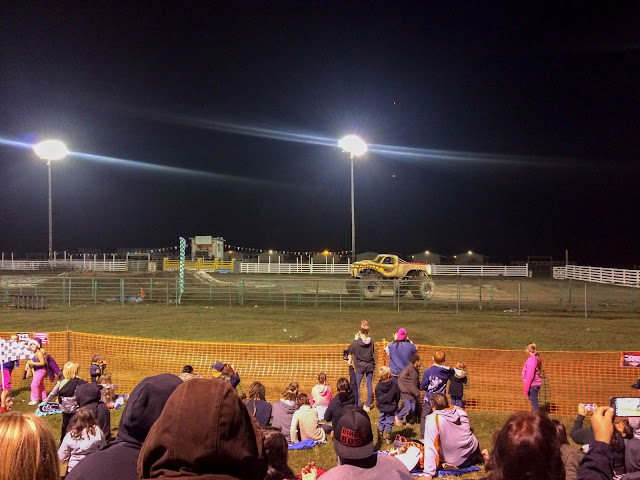 So fun.  The next morning we went our separate ways for our long drives home.  I opted to drive north up to Curry County in Oregon before actually leaving, stopping to take a photo of this farm cat along the way: 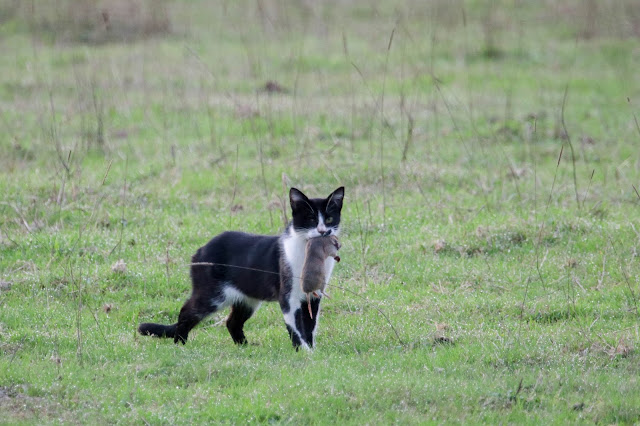 In Curry County I visited Crissey Field State Park, the Chetco River South Jetty and Chetco Point, getting my county list up to 35. 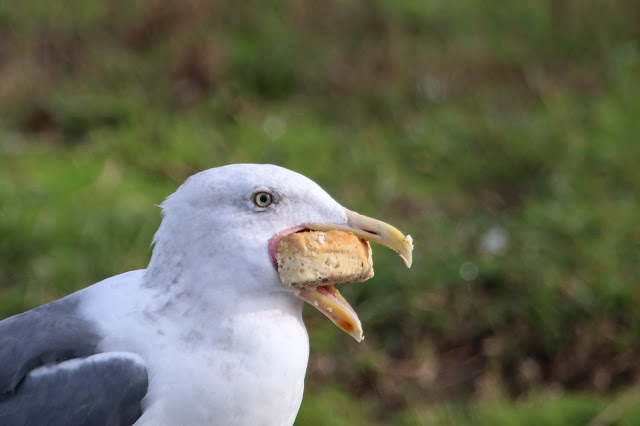 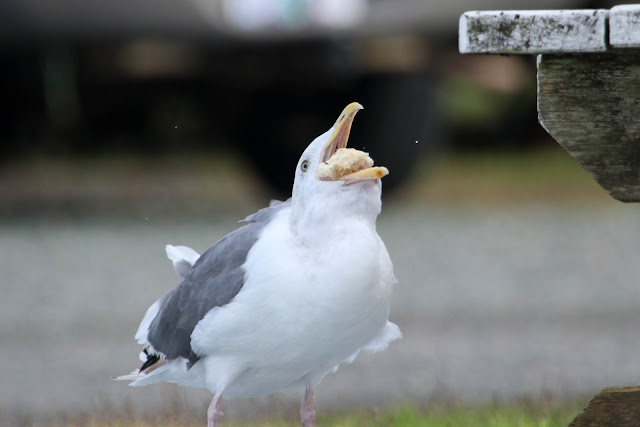 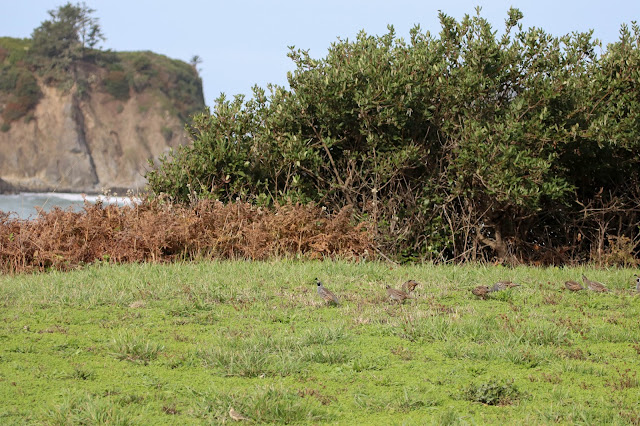 What is is this awful photo?? 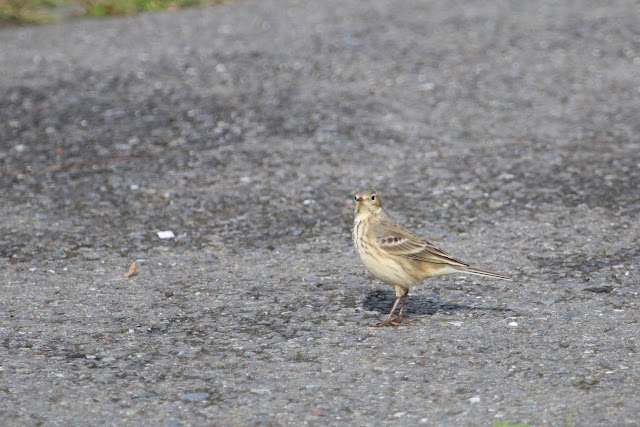 That is a stupid combo.