Scotes and 'ropes and things.

As you may have heard, a Common Scoter was found last weekend on the Oregon coast, a mere 2.5 hours from Portland.  Thanks to text alerts from Steve I was aware of this bird immediately, giving me extra time to build anxious excitement for the next few days while stuck at work.  I left early yesterday morning, joined at the last minute by my fellow bird nerd friend Eric, and made it to Siletz Bay by about 8:30.  It was fairly dark and raining and cold, but the bird was there.  Sleeping.  Way out there. 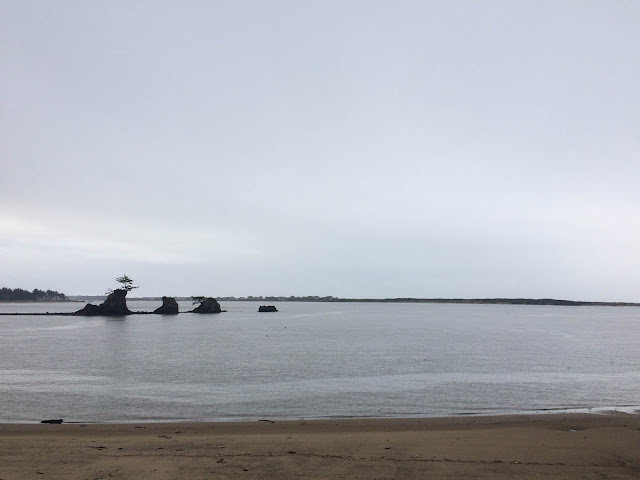 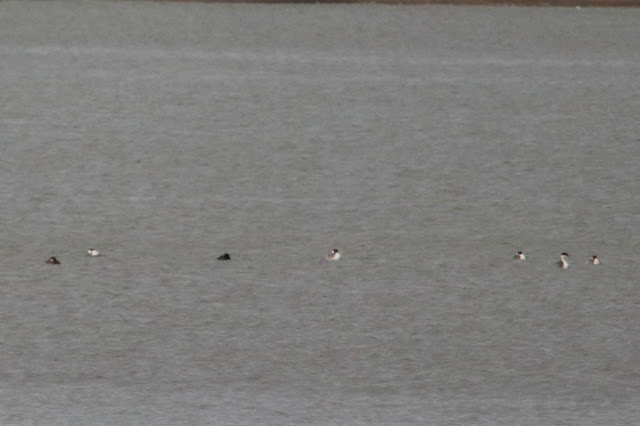 This was not ideal.  What was ideal was the little gazebo that was keeping us dry, so we stood around for about an hour hoping the dude would wake up.  This happened once for a second, then again for about three seconds.  Just long enough to see the bill through the scope.  While we waited we listened to a couple of women discussing what I think were their respective big years- one woman had traveled there from Ohio, and another from Newburyport, MA (and this was her 750th bird).

While the scoter slept he was joined by other scoters for a short while.  First a couple of Surf Scoters, then a couple of White-wingeds.  For a few minutes all four scoter species were in view... 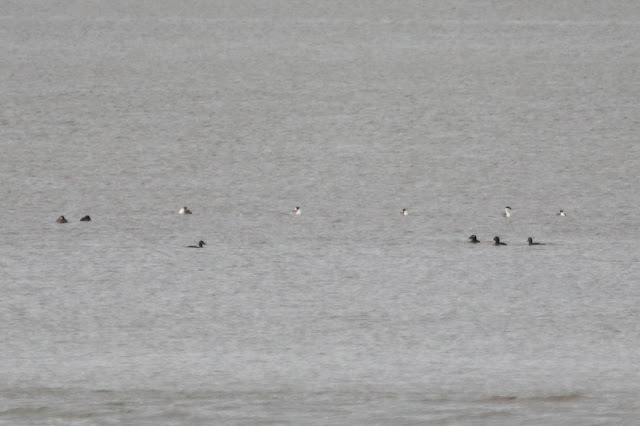 While we were getting ready to head out to our next destination (with plans to return later), a couple of Red Phalaropes appeared on the beach in front of us.  They poked around for 30 seconds and then flew right at our gazebo and over towards 101.  See ya. 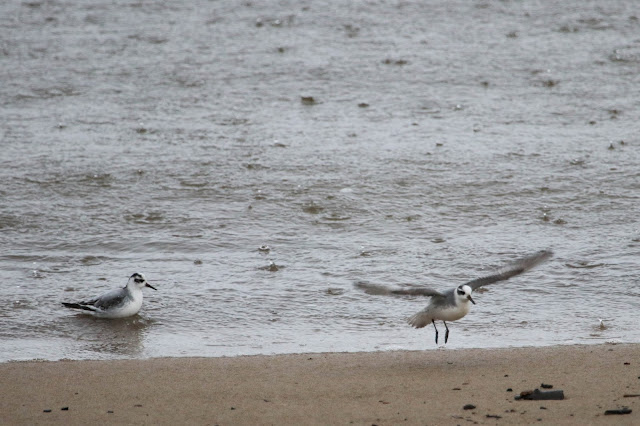 Next we headed south in the pouring rain to Yachats to look for a reported White-Winged Dove, with a possible side of Tropical Kingbird.  We found the residential area and a bunch of Eurasian Collared-Doves visiting two different feeders on the street.  We drove back and forth between them till eventually we found the White-winged Dove feeding on the ground.  It took off immediately, along with the other doves, so unfortunately no photos.  Also, we could not find any kingbirds in the area.

On our way back north we stopped at the pullouts near Seal Rock to check for rockpipers. 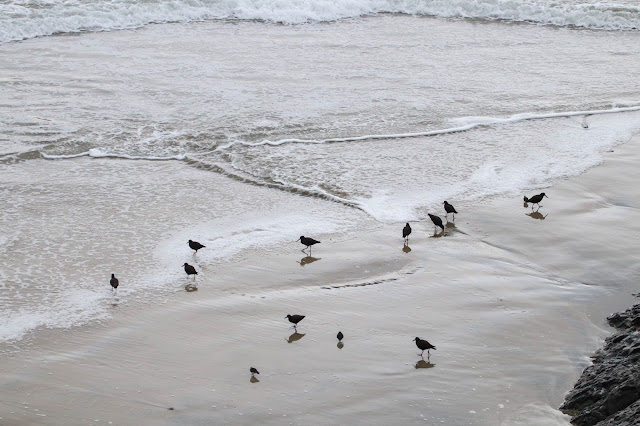 We were excited to find no fewer than 15 Black Oystercatchers feeding on the beach, alongside about five Black Turnstones.  The tide would drive all the birds back up to the rocks, then they would scurry back out as it receded.  This is not how I am used to watching either of these birds feed. 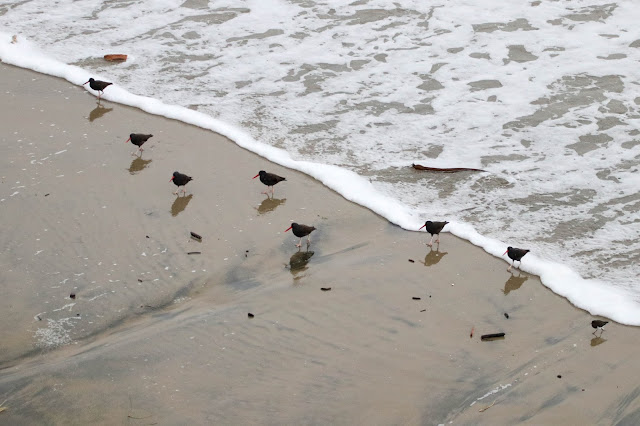 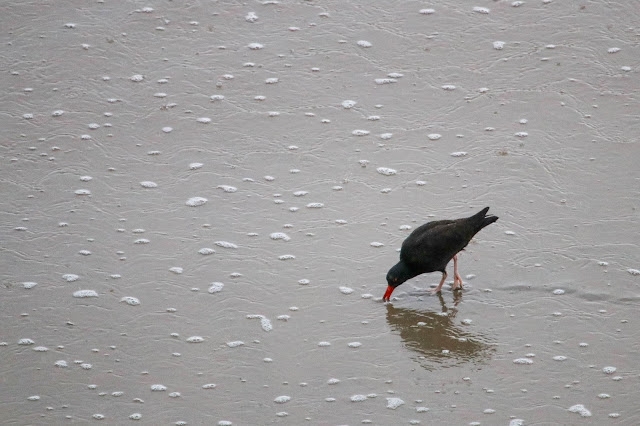 This is definitely the most oystercatchers I have seen together in Oregon, maybe anywhere.

We continued north and stopped at the South Jetty in Newport, hoping for crushable phalaropes.  Immediately we had a couple in the road, not giving an eff about us. 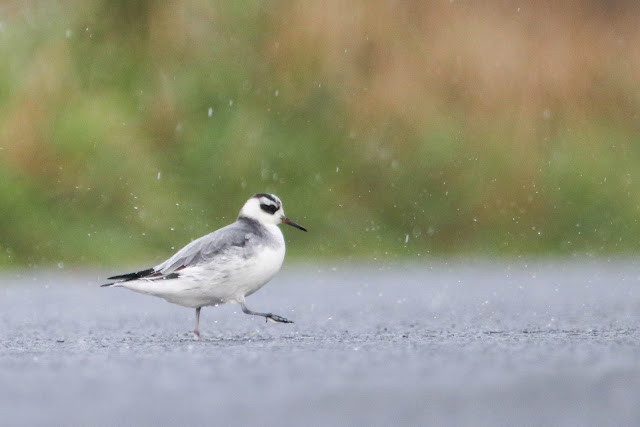 We were about to drive up the road when a crow decided to school us on how to properly crush a phalarope. 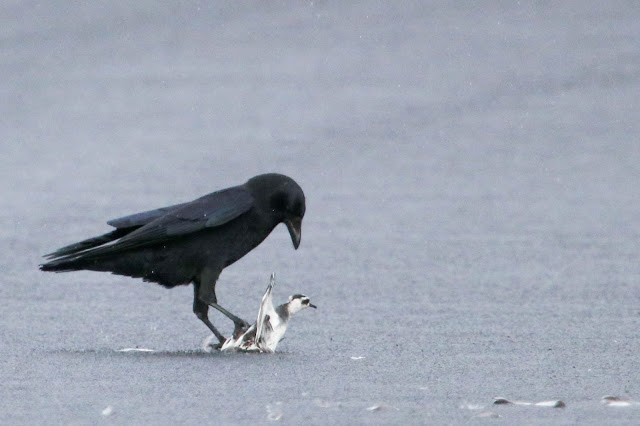 Ughhhhhh.  The crow was not a professional murderer though, the phalarope kept escaping and the crow would catch it again.  Over and over. 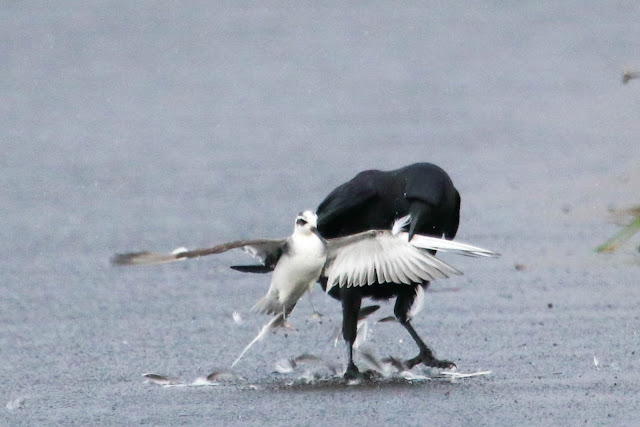 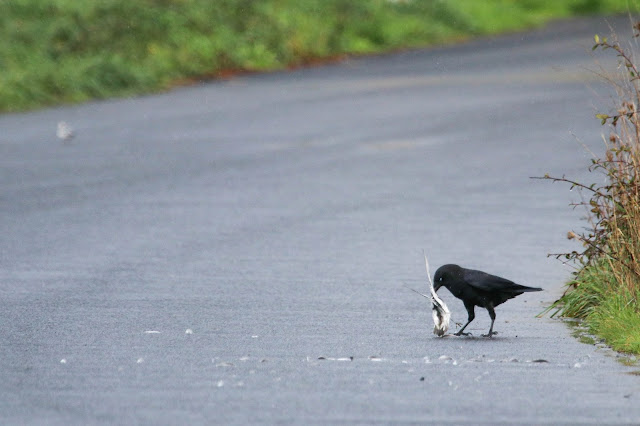 The other phalarope stuck around and watched (top left) 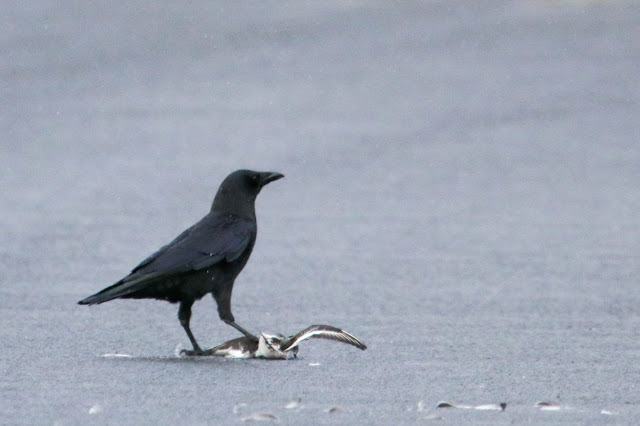 A car came and the crow grabbed the phalarope and flew up to the roof of a house, where we fully expected to view it's demise.  Nope.  That damn phalarope escaped again and flew down to the road with the crow in hot pursuit.  It tumbled into the tall grass and the crow seemed to decide the whole thing was too much work and flew up to the jetty sign.  I hope it finished the job, because that was one messed up phalarope.  (Side note, a possible Birdathon team name evolved from this event, the Phalarope Fucker-uppers.  It's good, no?)

After that we drove up to the "gull puddle" and found two more phalaropes hanging out under the sunshine and rainbows, not getting mauled by crows. 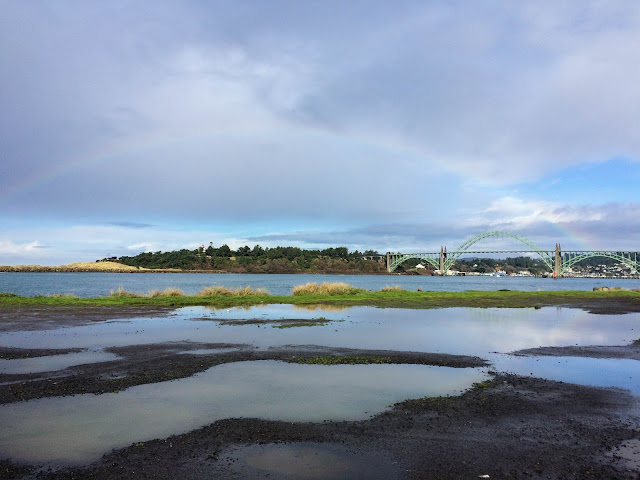 The birds were so confiding we got down in the mud to crush them.  A nearby fisherman hollered over, " You guys crazy or what?!" 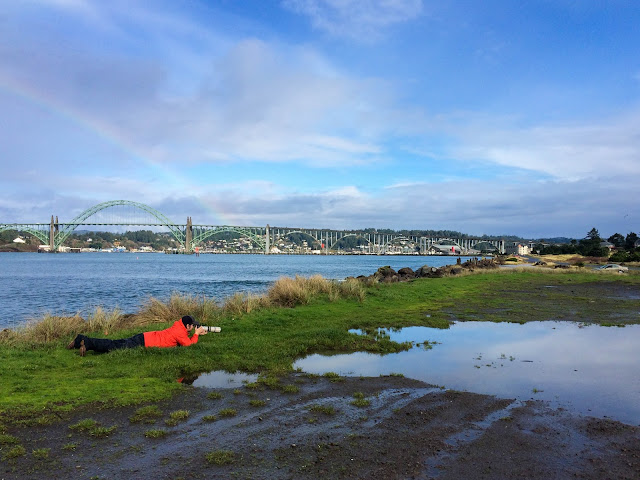 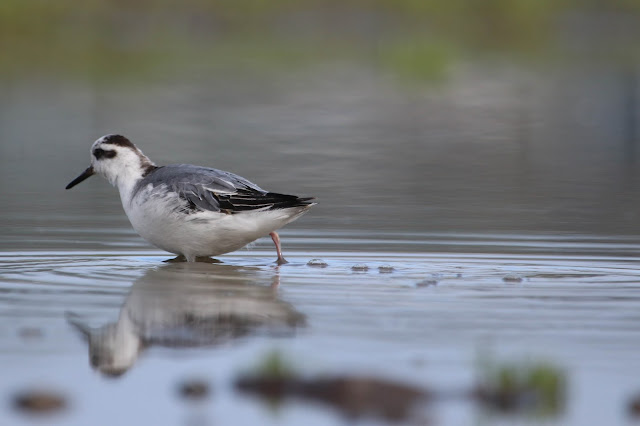 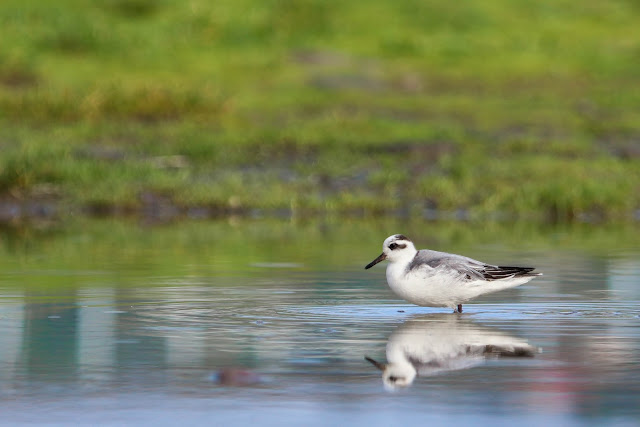 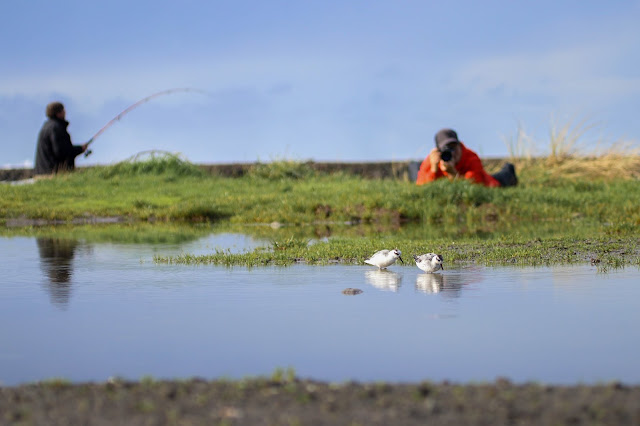 The fisherman asked what kind of birds they were, and commented that they were not very smart due to their disinterest in getting out of the way for cars

After spending some quality time with these birds we got back in the car to head north in hopes the Common Scoter was a bit closer to shore.  We stopped at the pullout to scan Siletz Bay where we found a nice fresh-looking human turd.  We did not see a good scoter.  A pleasant mustachioed man we had seen earlier at the gazebo walked up and said the bird was below the bridge, right next to the pullout.  Holy crap. 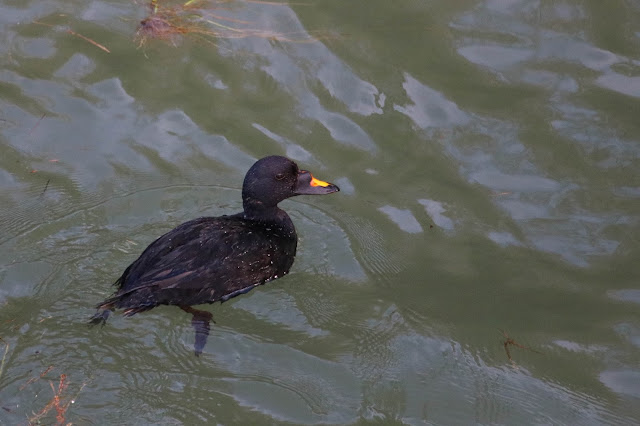 These were not the better views we had hoped for, these were views beyond my comprehension.  We watched for a long time as the bird fed constantly, mostly on crabs. 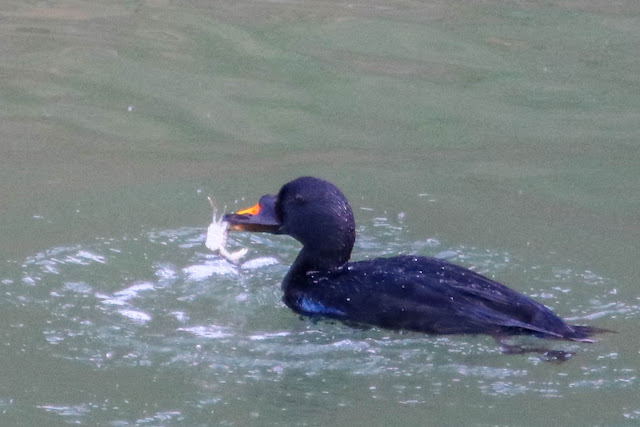 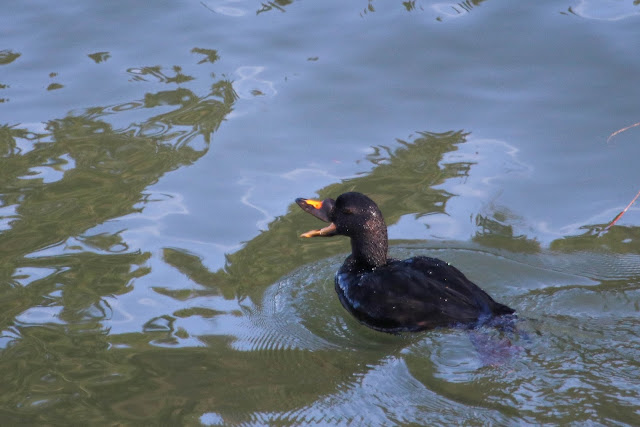 While watching the scoter a fellow from Illinois showed up who had been on the road since 3 a.m. he said.  He had flown into Seattle and rented a car.  After viewing the bird he planned to drive back to Seattle and fly to Texas for the Amazon Kingfisher.  Perhaps he is unaware that there is an airport in Portland, as well as Eugene. 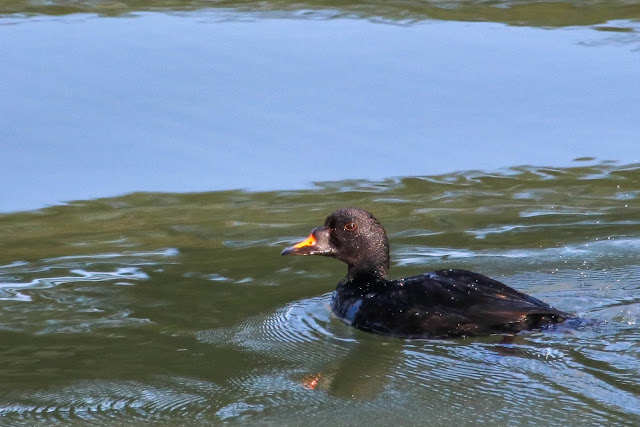