on November 25, 2016
While viewing the Common Scoter last week one of the big year women commented on the rainy weather, wondering how we Oregonians deal with it.  I can be defensive of our wet weather, and I look forward to it returning every fall, but I also know the loophole when things get too frustrating:   driving east.  Often enough, all it takes is getting east of the Cascades and the clouds part and the sun pokes out.

On Wednesday I decided to take advantage of the loophole by driving east to a new spot for me, McNary Wildlife Area in Umatilla County.  A Summer Tanager had been reported here the week before, and folks that had gone to look for it reported Bohemian Waxwings.  This was a lifer I had long desired, and had already decided to hunt down the first ones I heard reported this winter.

I found the entrance to the McNary Dam and followed the road down, turning left on 3rd Street.  I was looking for a sign for a Nature Trail when I noticed a couple of big berry-filled trees and I slammed on my breaks. 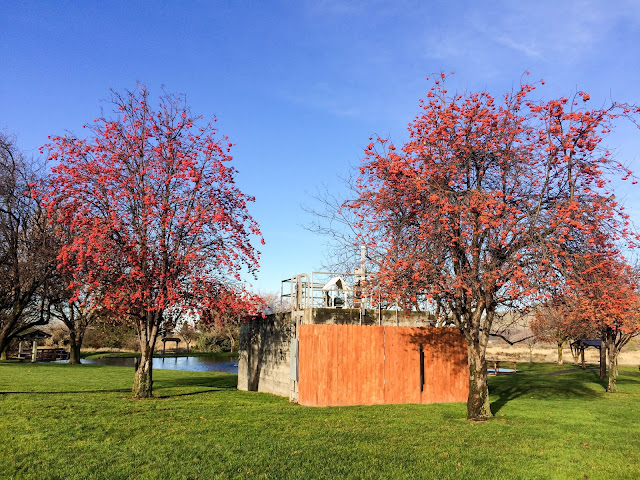 There was a little gravel parking area here so I pulled up and scanned the trees seeing only Cedar Waxwings and robins at first.  Then I noticed the berry-less tree behind these trees and I caught sight of my first Bohemian.  There may have been tears. 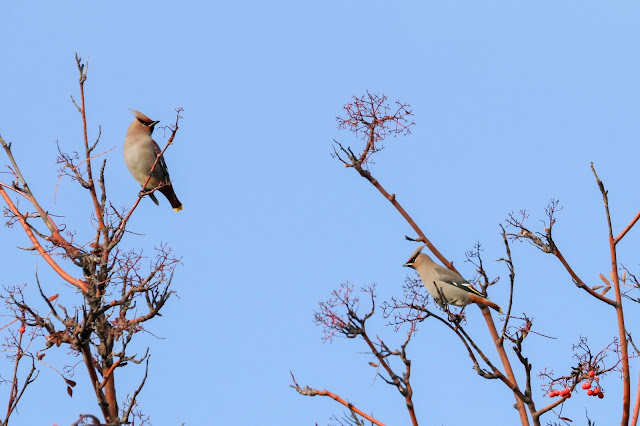 The berry trees were hosting tons of activity but there were also many birds hanging out, as waxwings are known to do. 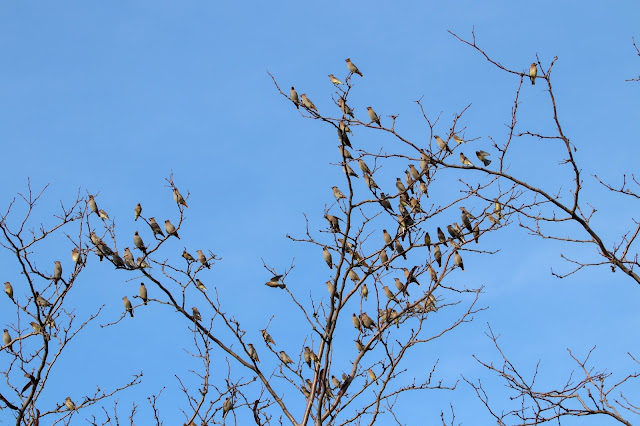 I counted 67 BOWA's in this photo, plus many CEWA's

Most of the reports I had read were of one or two Bohemians in a flock of Cedars, so I had not expected this awesome showing.  Yay berry trees. 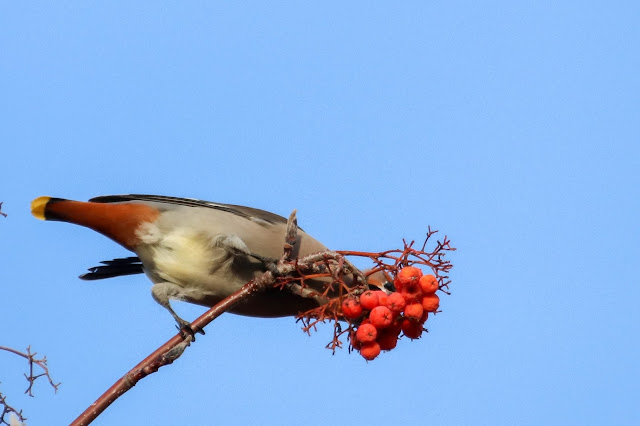 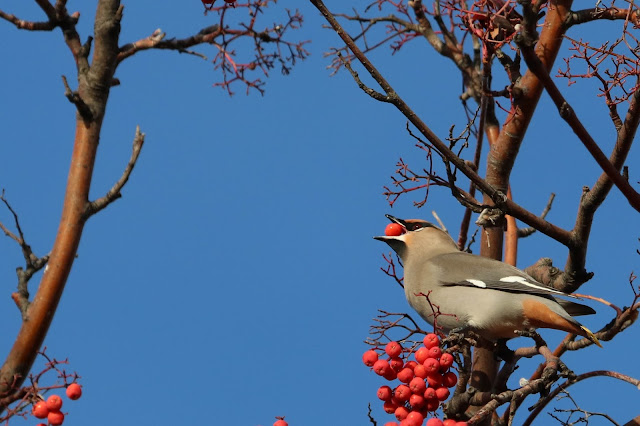 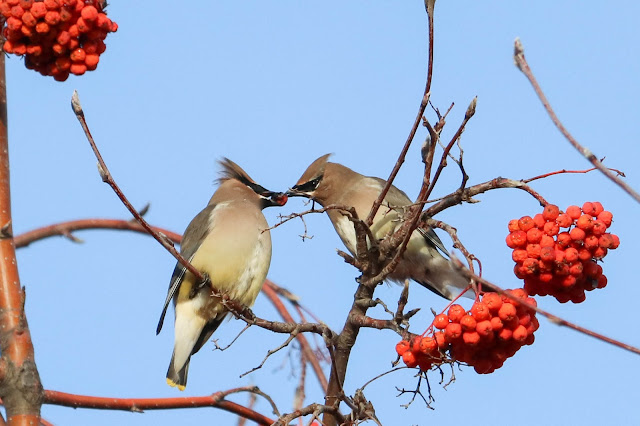 After about half an hour I abandoned the waxwings to check out the "Nature Trail" area with the mutts.  We walked around a bunch of the little trails and found many pleasant birds.  Full checklist here. 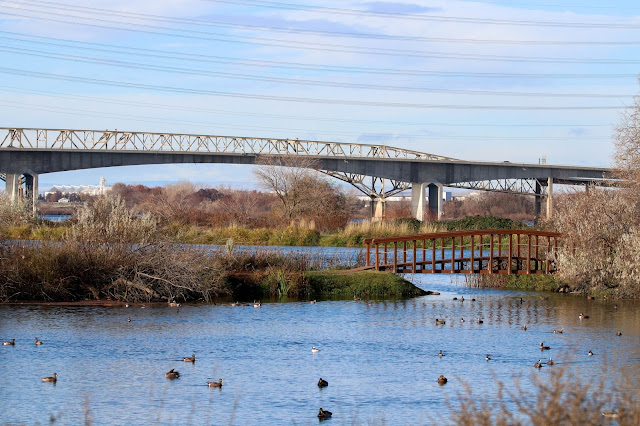 There were many cool little foot bridges and boardwalks around 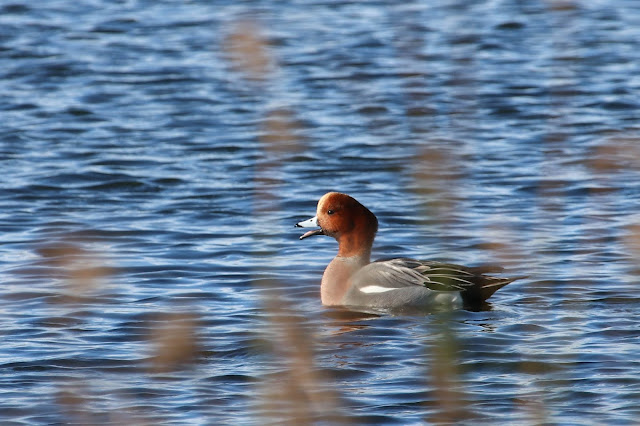 I am so grateful that this was not my only view of Bohemian Waxwing: 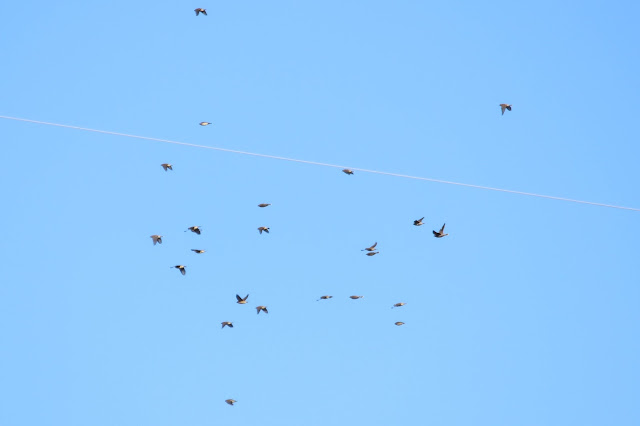 Another thing I had noticed on eBird checklists from this area was Black-crowned Night-Herons.  Every checklist had 11-12 birds on it, so I figured there must be a noticeable roost somewhere.  Finally I noticed a small island in one of the ponds with some little herons tucked away on the branches: 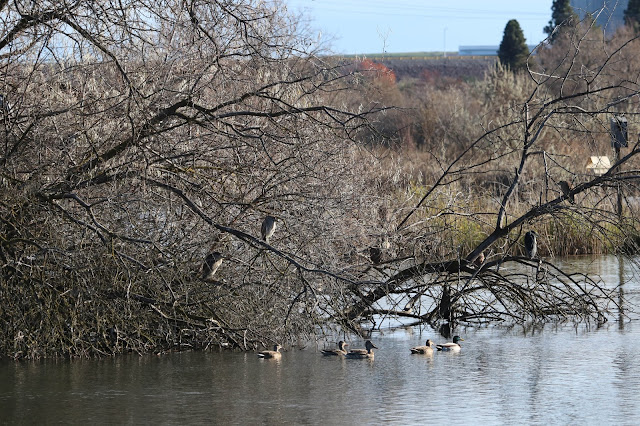 I walked around and found a side trail that lead to the sunny-side views of the birds.  Unfortunately, despite the birds being on a protected island, I still scared the crap out of them and they swirled up into the air before quickly re-settling on the branches.  I felt like a jerk, but since they settled down quickly I decided not to leave immediately.

When they took flight initially I was able to get a good count of 18 birds on the island, and two more not on the island.  A single bird seen earlier in the morning made for a count of 21 birds!  Pretty cool. 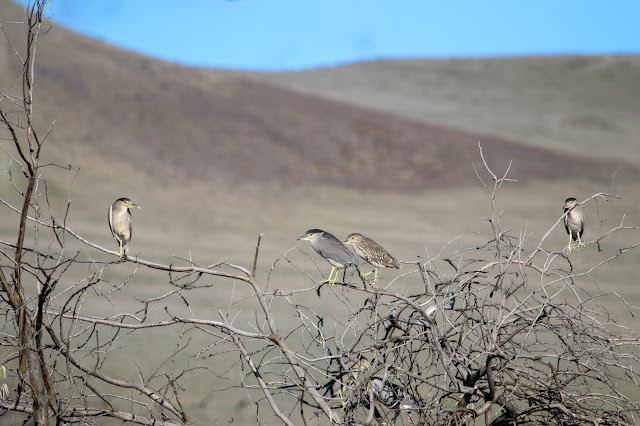 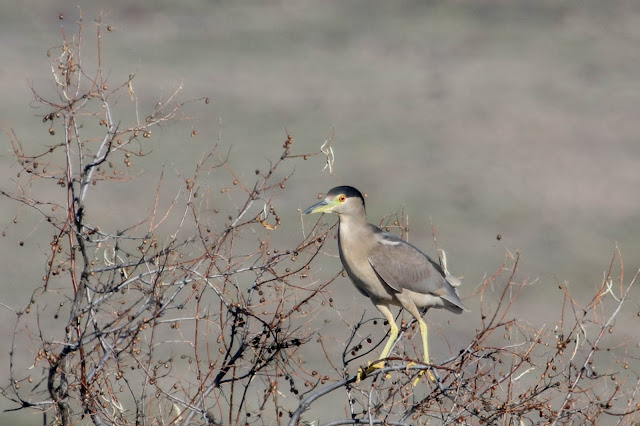 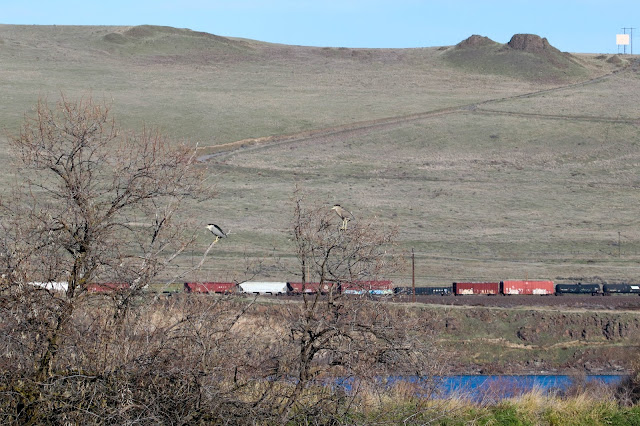 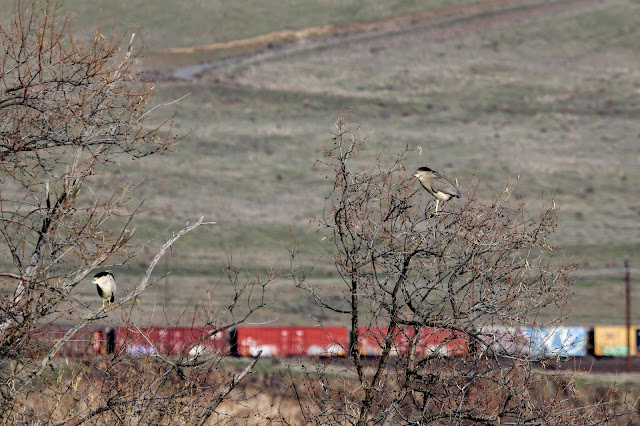 After the nature trail we returned to the berry trees so I could eat a sandwich.  Activity had mellowed but the waxwings were still hanging out in a tree across the street.  As I drove away I noticed another flock or two in other trees as well.  I did not get far before a Townsend's Solitaire caused me to stop in the road. 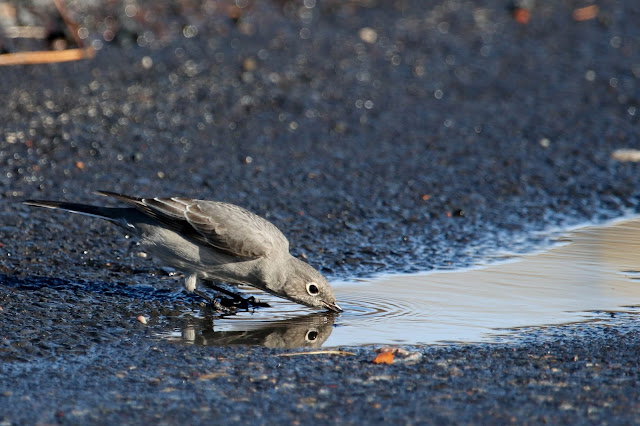 My plan was to bird my way back to Portland, so that's what I did.  I made a magpie friend at the Umatilla Marina: 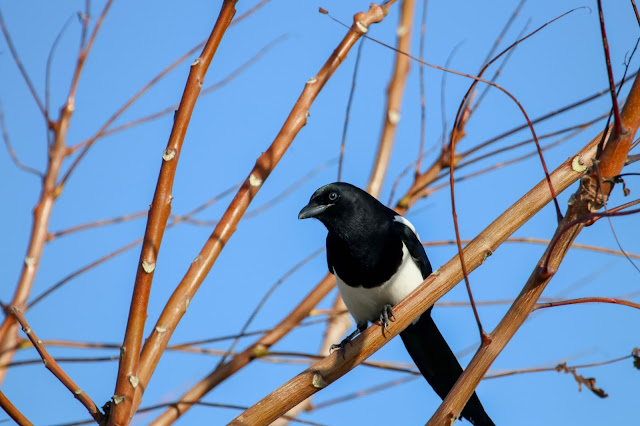 Dog treats for me, yes?

I found a potential emu source population along Highway 730: 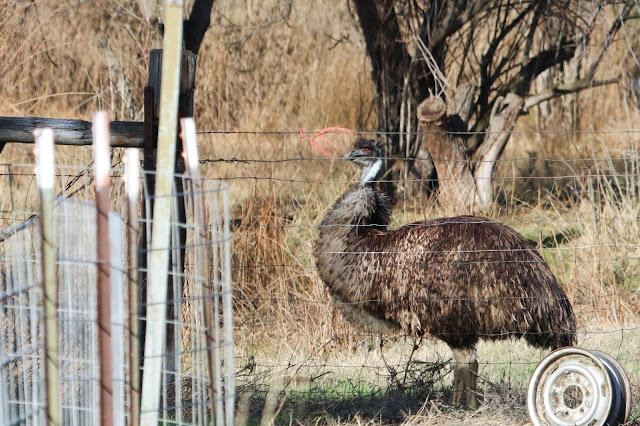 I tried to turn this bird at Umatilla NWR into a goshawk: 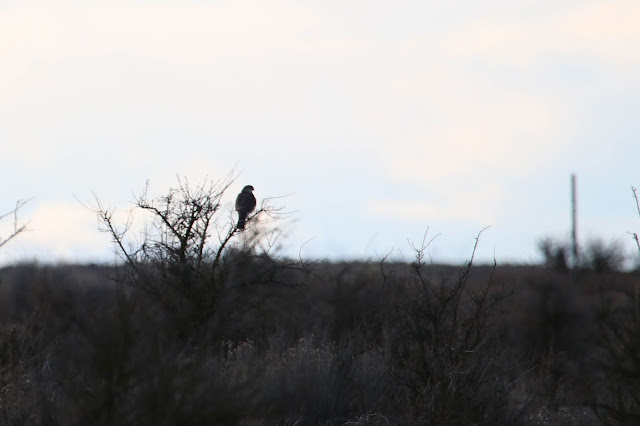 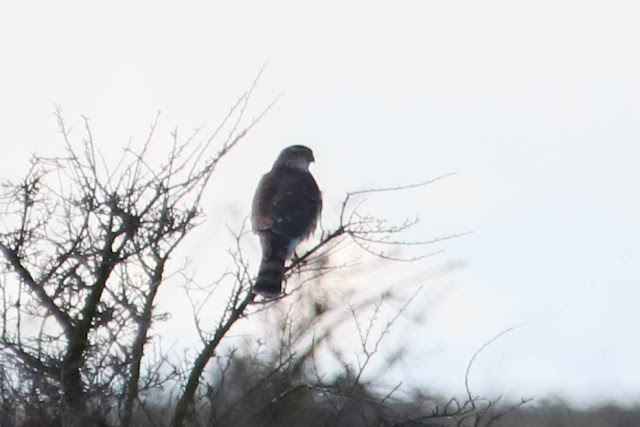 Where's Nelson Briefer when you need him?

At Willow Creek WMA in Gilliam County I picked up my county Tundra Swans and what I think is my county Sharp-shinned Hawk: 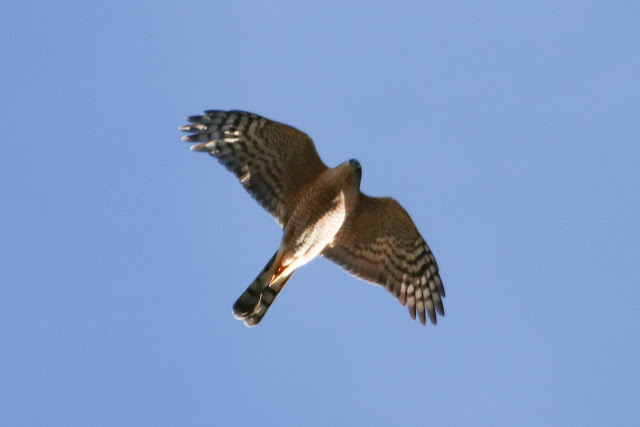 Ugh, how did this post spiral into accipiter brain pain?  Anyway, my last stop was at Quesna County Park in Morrow County.  Not much bird action but it was the last time the dogs and I stretched our legs in sunshine. 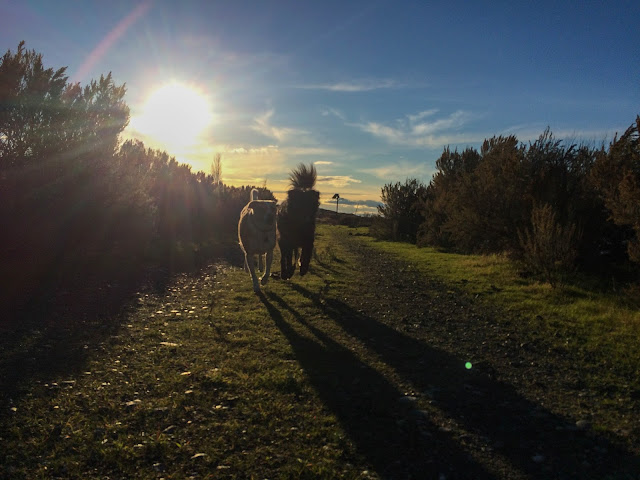