on March 30, 2017
Texas happened.  It was filled with piles of lifers, bigger piles of ABA birds, and even bigger piles of year birds.   There was sweat, ticks, chiggers, thorny plants, slippery slopes, border patrol, and a mishap at the mouth of the Rio Grande resulting in a drowned phone (not mine).  None of that matters.  The birds were worth it.  It all started last Wednesday afternoon. 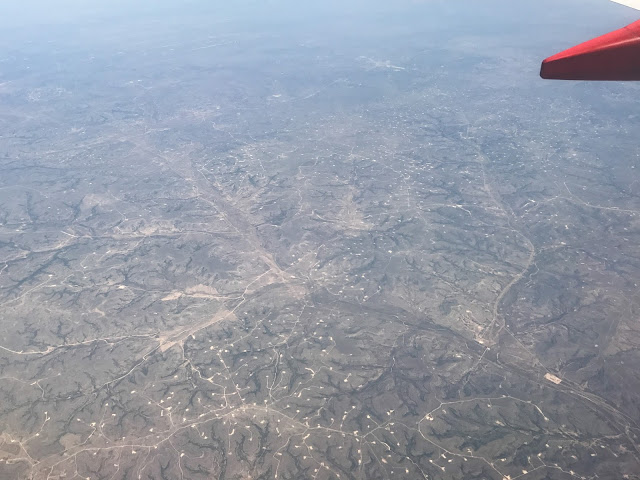 Audrey and I flew into San Antonio, after passing over these interesting patterns on the landscape which I learned were roads made to get to potential oil drilling locations.  Welcome to Tejas.  We figured out where to pick up our rental car and headed west to the Lost Maples area of Texas Hill Country where we stayed two nights at Foxfire Cabins. 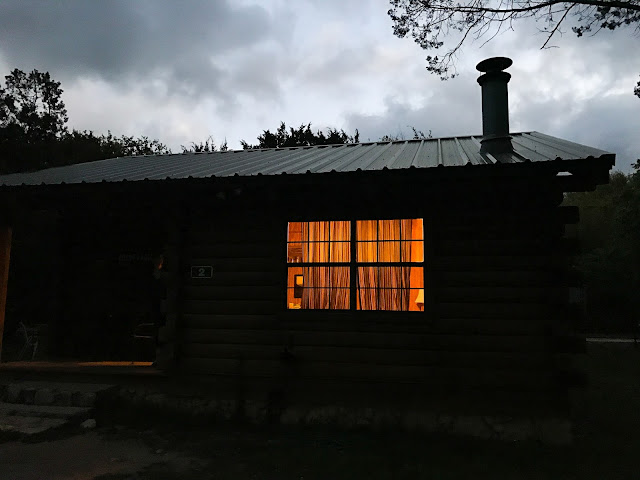 It was still light out when we arrived and the birds were quite active so instead of going to find food we wandered around chasing everything that chirped. A Carolina Wren sang over and over from this perch: 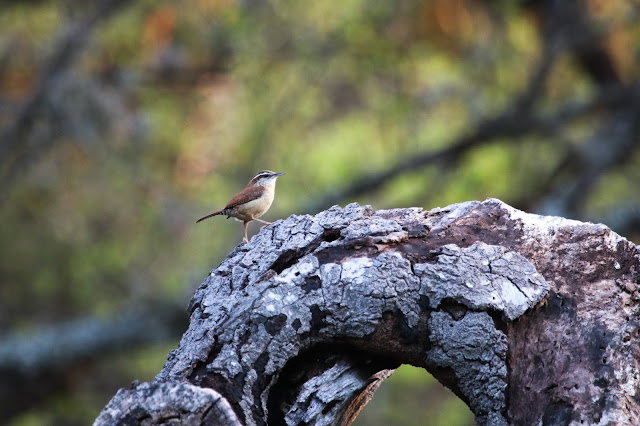 After following around Black-crested Titmice, Carolina Chickadees, and a beautiful Yellow-throated Vireo, we realized we needed to track down some food.  This turned out to be an ordeal that involved a very long drive to Leakey where we found Bear's Market, which has a fancier website than I anticipated.  On the way back we saw either feral pigs or javelinas on the side of the road.  Back at the cabin I decided to try some night sky photos. 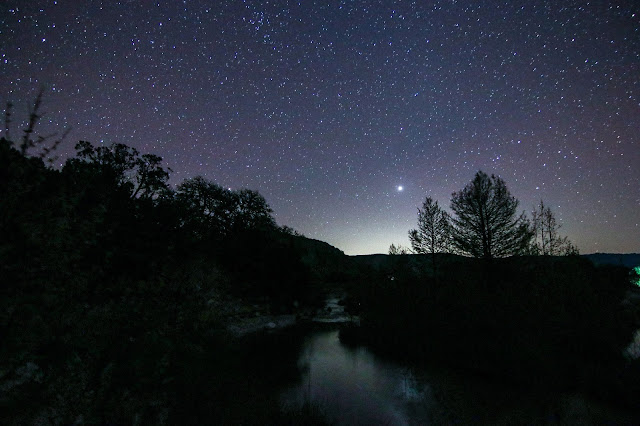 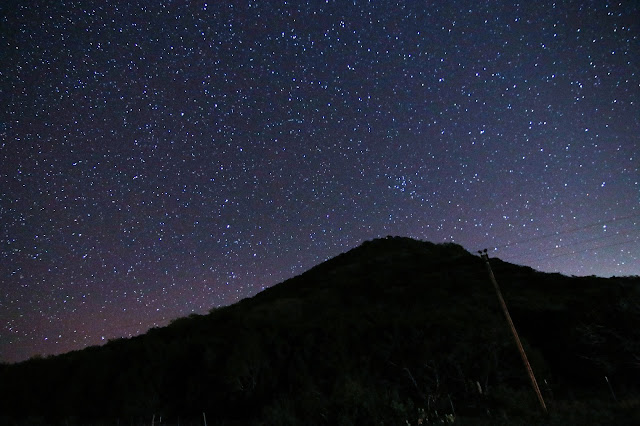 Putting the hill in hill country

The next morning we woke early to head to Lost Maples State Natural Area, less than a mile up the highway from our cabin.  We parked at the overflow lot by the bird blind and hiked in along the river where we heard Golden-cheeked Warblers singing almost immediately.  It took awhile to lay eyes on them but eventually we did. 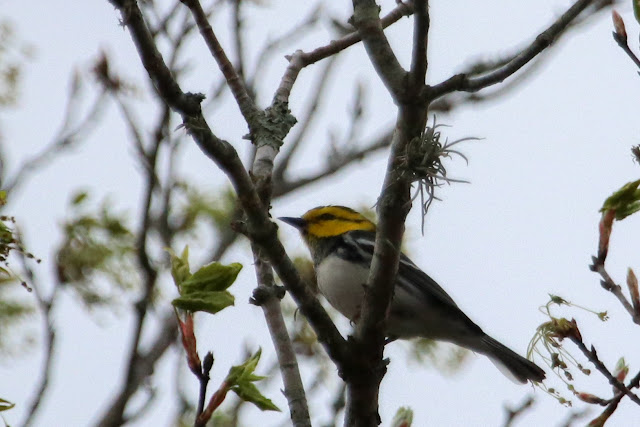 Many bad photos of these warblers were taken but I will only show you one.  There were plenty more good birds around and we looked at them also. 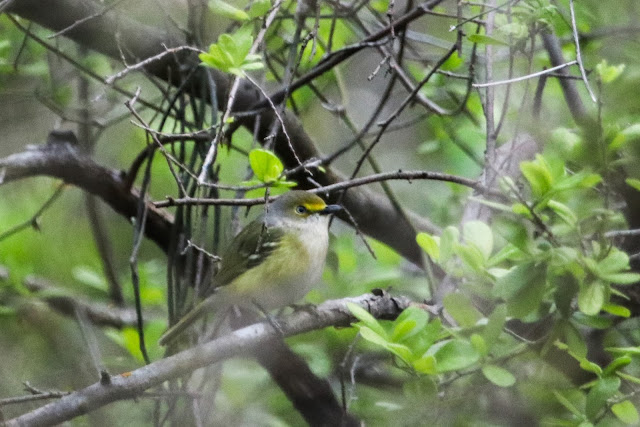 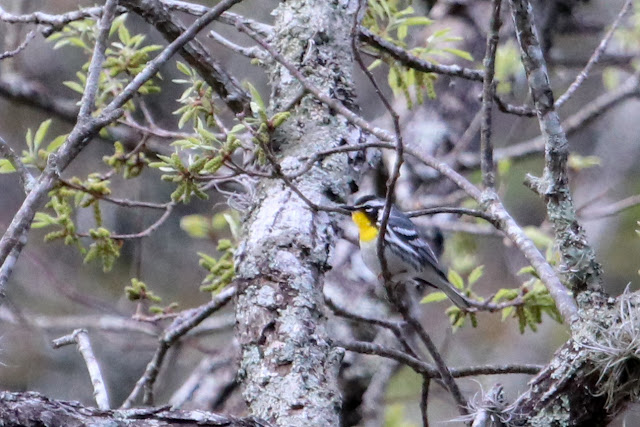 The trail led us up a steep rocky section to some beautiful views of scenery as well as a fly-by Zone-tailed Hawk.  The hawk was too quick for photos, so here's the view instead: 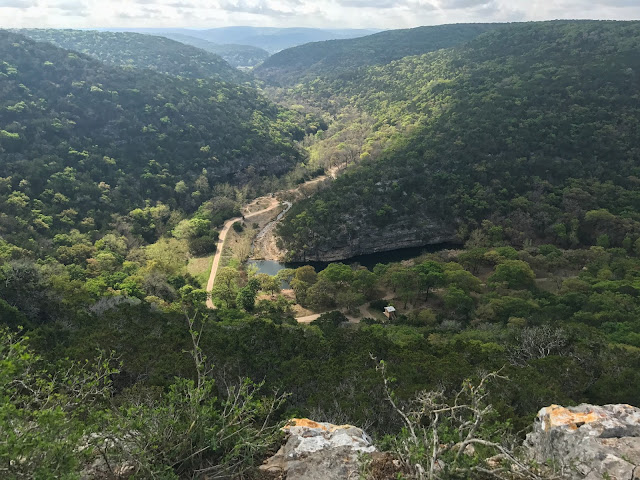 That's the trail we hiked in on

Along the trail at the top we found a Merlin, more Black-crested Titmice, Blue-gray Gnatcatchers, and a grasshopper so big it looked like a bird when it flew off. 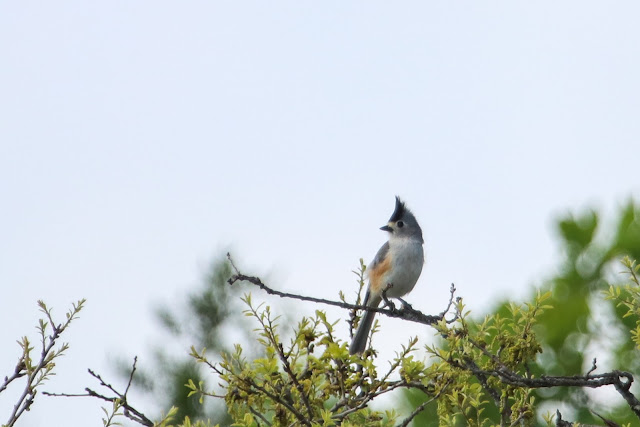 We failed to locate any early Black-capped Vireos and hiked back down to the main trail area where a Carolina Wren was letting loose. 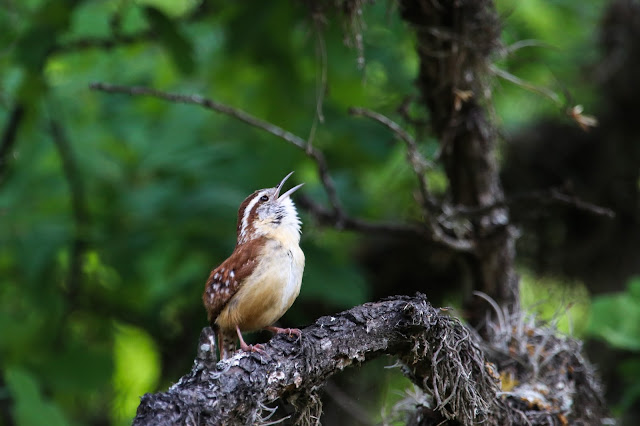 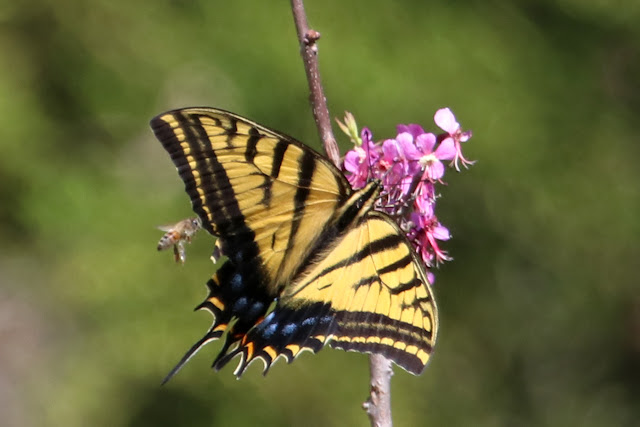 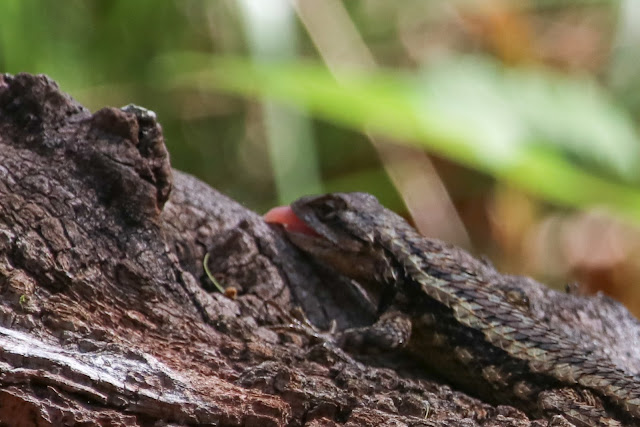 Bad photo of a lizard tongue 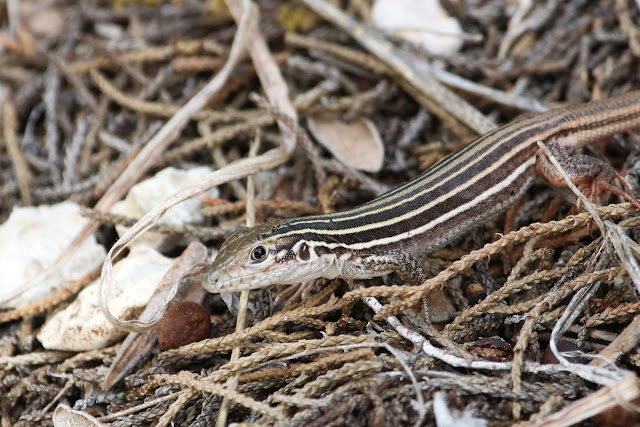 Back at the parking lot we checked out the bird blind looking out at a feeder station.  Most of the birds were Chipping Sparrows but we also had cardinals, a White-tipped Dove, Woodhouse's Scrub-Jay, Lincoln's Sparrow, American Goldfinch, and Rufous-crowned Sparrow. 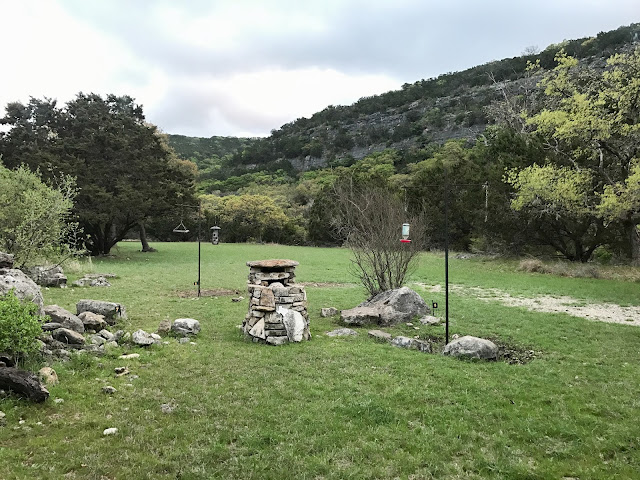 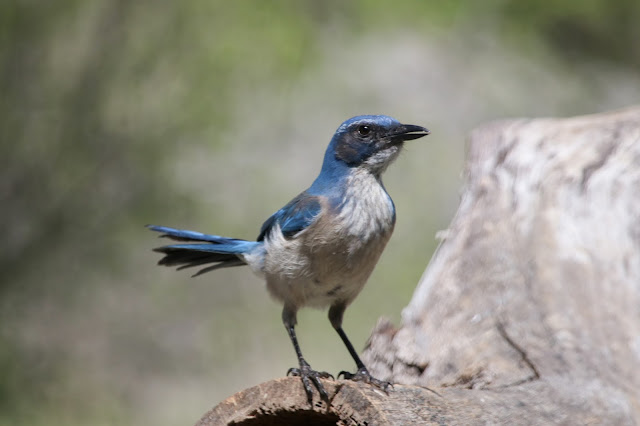 In the afternoon we drove over to Kerr Wildlife Management Area, another area that's good for warblers and Black-capped Vireos.  We took a wrong trail turn and ended up in this big random field that had a cage in it.  A Turkey Vulture cage. 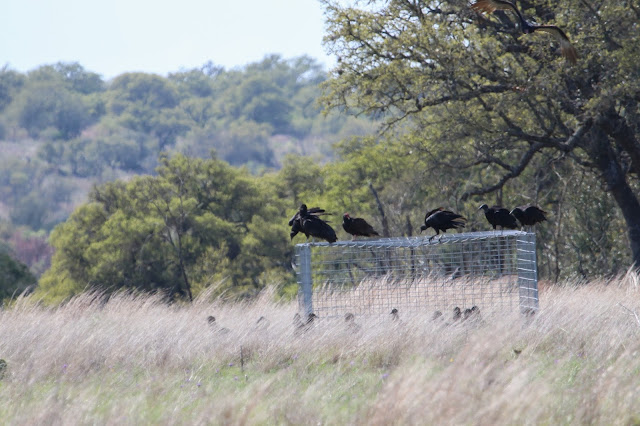 You might be thinking, wtf?  Well we happened to run into a fellow who was checking on the cage and so we asked him about it.  He said they were trapping Turkey Vultures for research, though the trap was having some issues and they were able to escape.  He seemed to be working with the Wildlife Management Area.  It was odd. 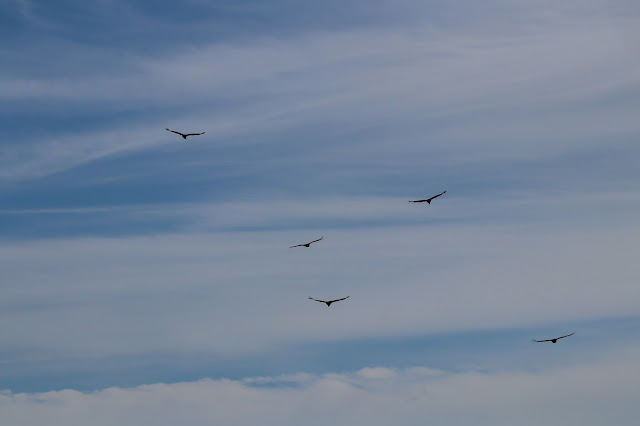 In the same field were these lovely cactus flowers: 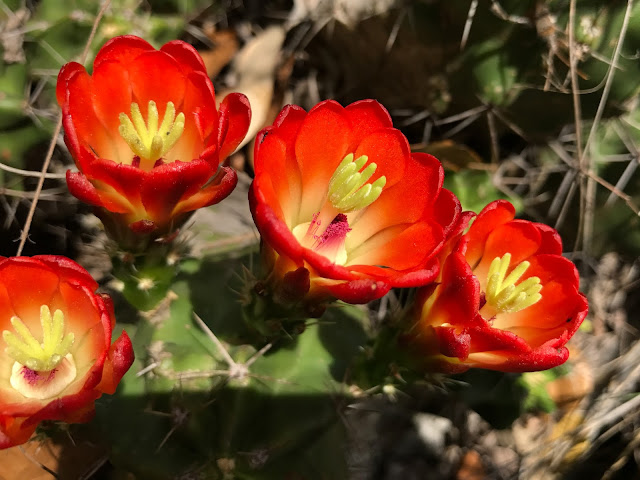 We drove the main road through Kerr WMA and explored an area that was supposed to be good for the Black-capped Vireos.  No luck on that front, but other good birds included our only Field Sparrow of the trip, Lark Sparrows, gnatcatchers, Vermilion Flycatchers, and Eastern Bluebirds. 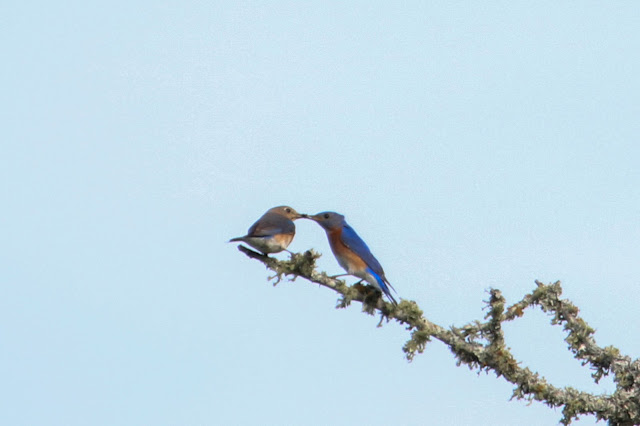 Male delivering food to the female

On the drive out we stopped for my lifer Louisiana Waterthrush feeding along a pond which was a very pleasant surprise. 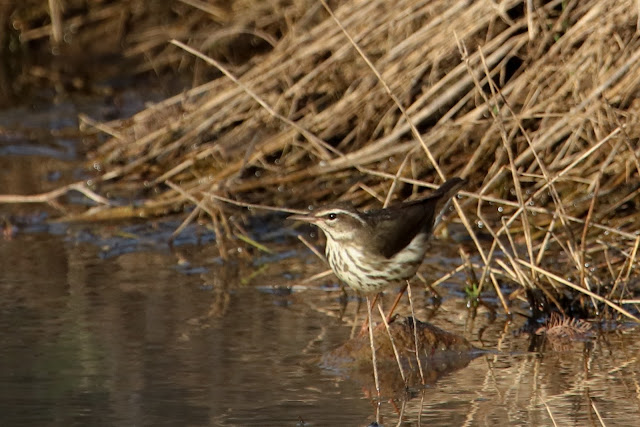 On our way back to the cabin we failed to get gas at this closed gas station, but succeeded in finding more birds.  Peacocks. 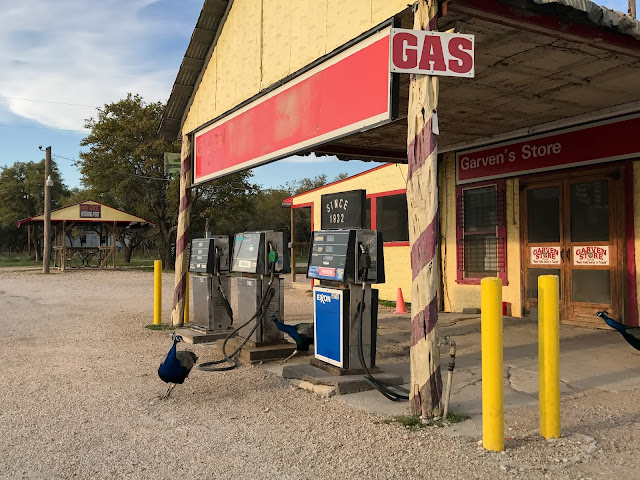 It was the end of a great beginning to our Texas adventure! 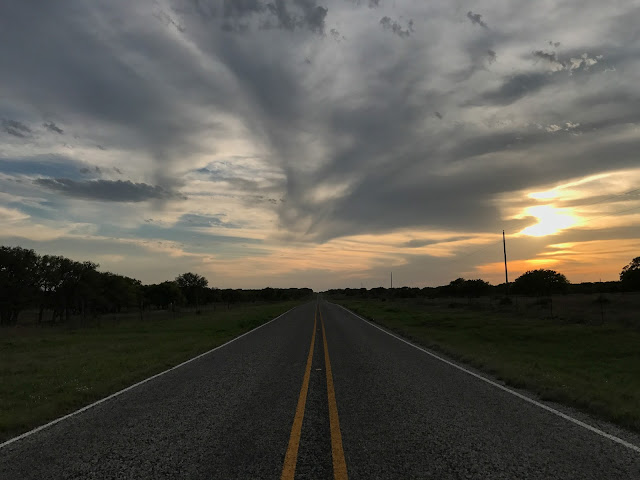 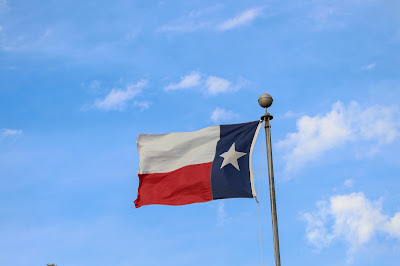