on May 03, 2017
Man, it's been way too long since I blogged about the local birds!  After last weekend my 5MR list really started to grow with lots of fun birds coming through in migration.  I decided to bird Blue Lake Park one morning and had 13 new species for my Blue Lake list including four new species for the park's eBird list. 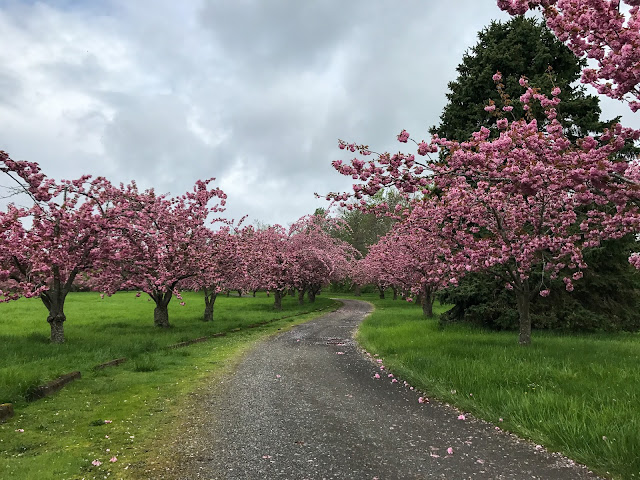 It's been a strong spring for Nashville Warblers and I was happy to find a couple there along with Yellow-rumped, Wilson's, Orange-crowned, and a Black-throated Gray. 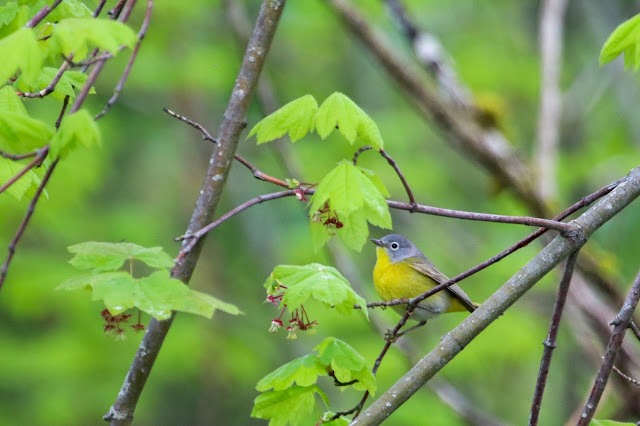 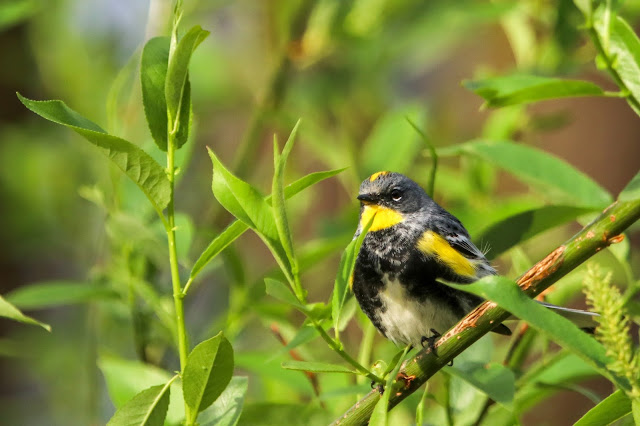 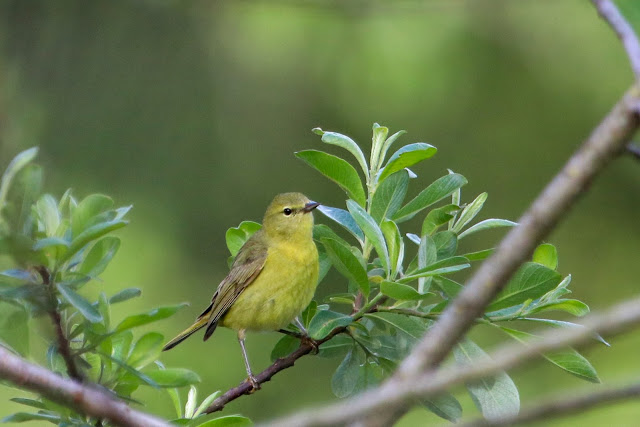 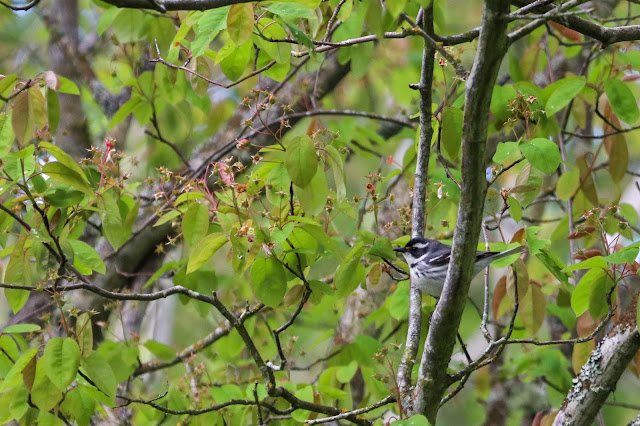 Oh yeah, and the best part was that they weren't super high up!  They were mostly in younger trees and shrubs.  They even offered up this nice combo for me:

The main field at the park has been flooded for awhile now and the ducks and swallows have taken nicely to it.  The fruit tree blossoms make for pretty reflection pictures. 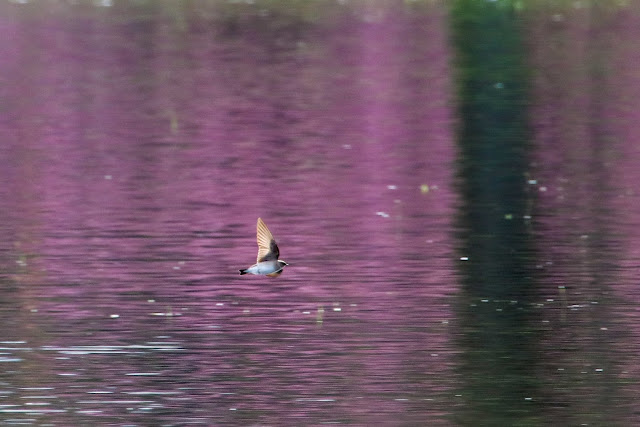 A pair of Killdeer seemed to be planning a nest along the gravel road through the trees and one put on its wing show for me, leading me away from its mate and into the grass. 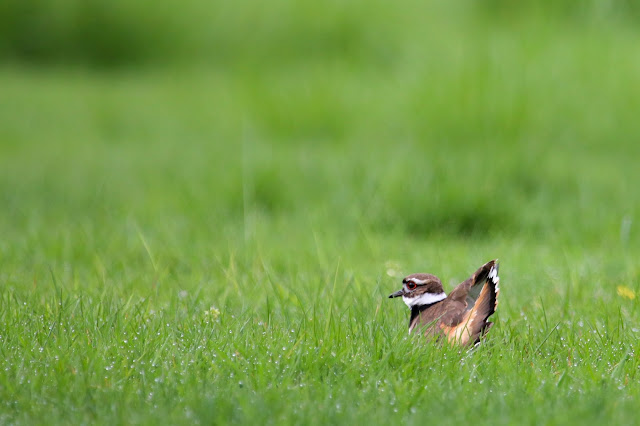 Saturday morning Jacob and I finally planned to hit Mount Tabor for some real spring migration.  Most birders in Portland had the same plan so we ran into all sorts of characters including Audrey, Sarah, and Max.  We had not anticipated the Rock Wren found the day before to still be there and a sweet nerd crew gathered around to gawk. 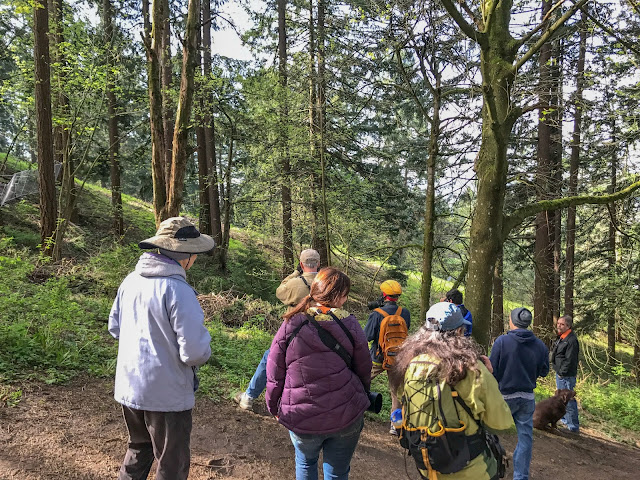 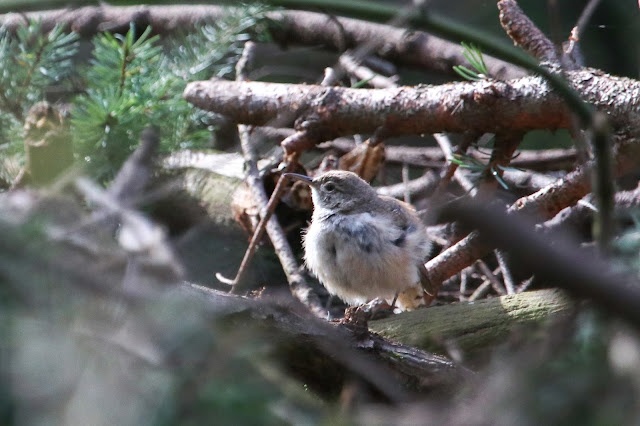 Jacob, Audrey, Sarah, Max, and I teamed up for awhile and found some more cool birds like Cassin's Vireos, Western Tanagers, a Pacific-slope Flycatcher, and a Dusky Flycatcher.  The Dusky was particularly accommodating which blew my mind. 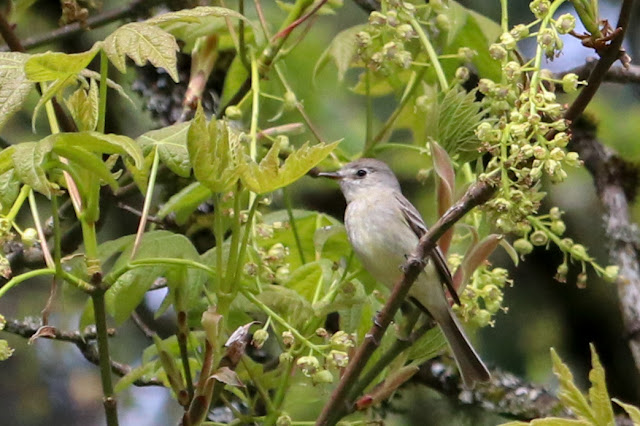 Our full checklist from Mount Tabor is here.

Things on the home front have been even more exciting if you can believe it.  Last Friday I looked out in the backyard to see what was happening and was dumbstruck to focus my binoculars on a Brewer's Sparrow.  I may have yelled a bit too much and the bird took off before I could get a picture.  Argh!  But I waited and it came back and hopped around on my walkway like it was totally normal. 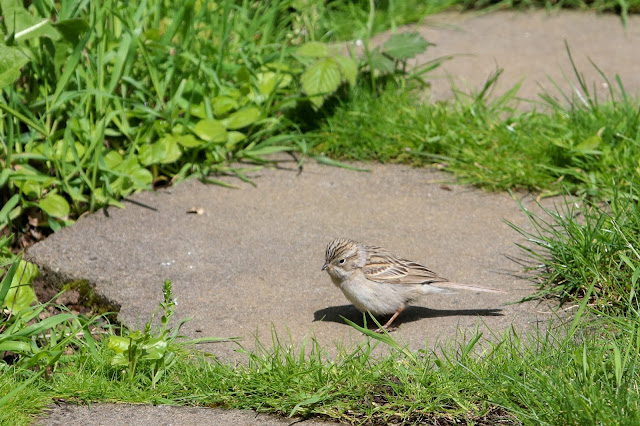 Brewer's Sparrow is not a bird that lives in Portland.  It prefers sagebrush on the east side of the Cascades, but does appear in the county almost every spring.  I had seen three in the county before this day, two were together five years ago in Troutdale.  One was two weeks ago with Jacob and my friend Sunni at Salish Ponds in Fairview.  This is not a bird that shows up in people's yards. 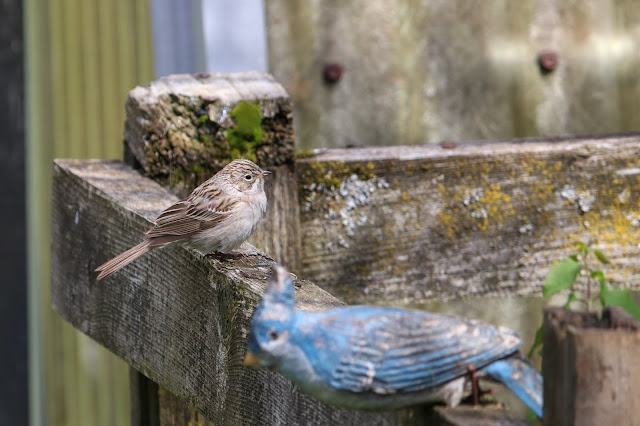 This is a very good yard bird, probably the best I have ever had.  Audrey saw it again Saturday morning in the yard, and Jacob saw it Sunday afternoon.  Yesterday morning before work I was looking out the window, watching an Orange-crowned Warbler flit around in my snowberry.  Then something flew into the dogwood in front of the snowberry, a freakin Lazuli Bunting! 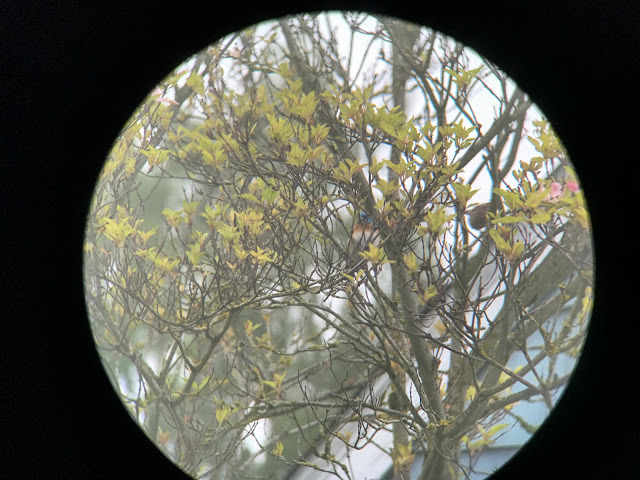 This was another new yard bird, another GREAT yard bird.  In some places Lazuli Buntings are common feeder birds but certainly not in Portland.  It took off soon after and I had to go to work.  I noticed it was the first one reported in the county this year, so that's nifty.

Anna's Hummingbirds have returned after nesting and the young ones area always around doing weird stuff.  One even flew right up to my camera and hovered in front of the lens for a few seconds. 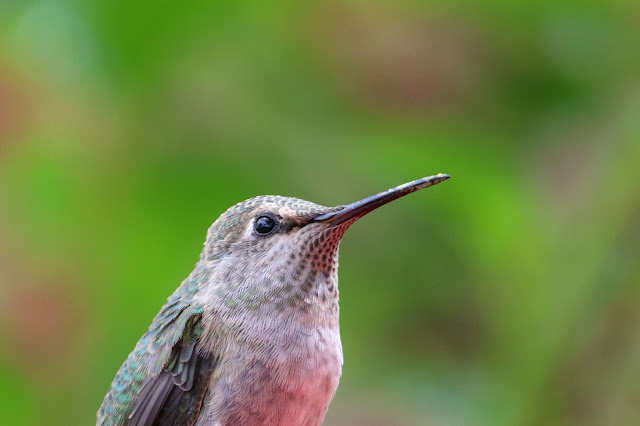 Black-capped Chickadees reclaimed the house they used last year and have been pretty active collecting nesting material, including Ralph's fur. 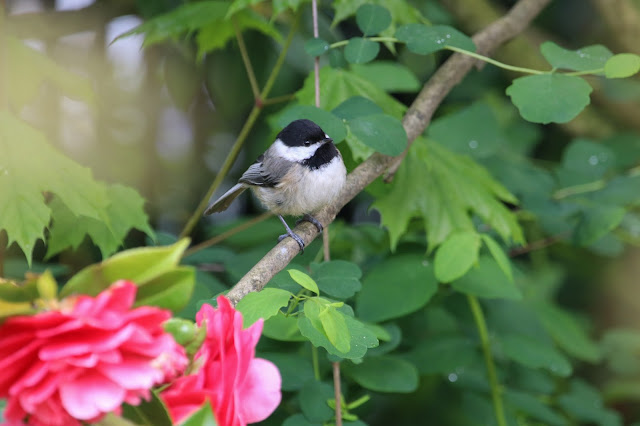 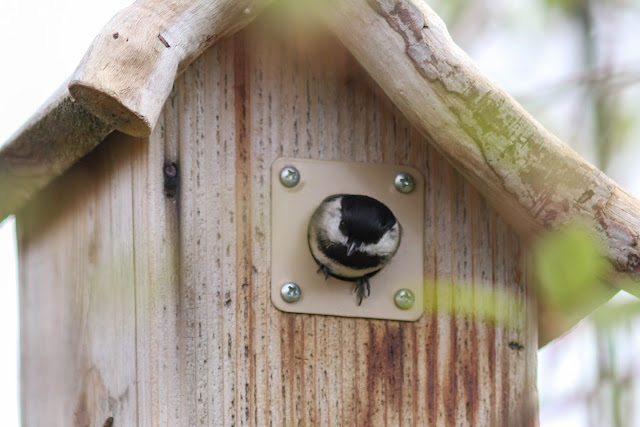 A couple falls ago I planted a baby big leaf maple tree in the backyard to replace the mountain ash that had to come down.  I crossed my fingers that someday it would attract warblers though I was not expecting it to do so when it was still only four feet tall. 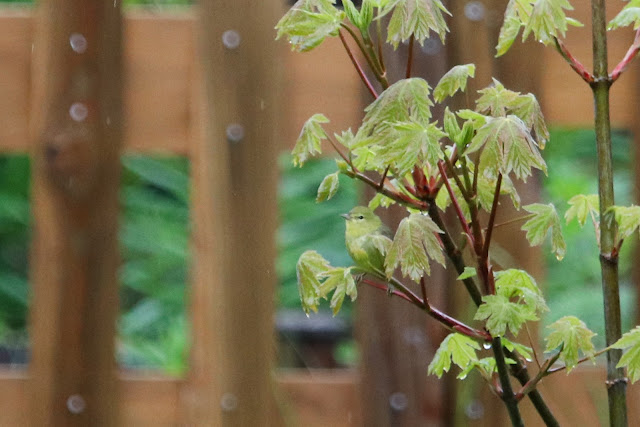 There has been an Orange-crowned and a Yellow-rumped in the yard almost daily this spring, which is unusual and awesome.  Golden-crowned Sparrows will leave me soon so I have to enjoy them while I can.  At least the White-crowneds will probably stay. 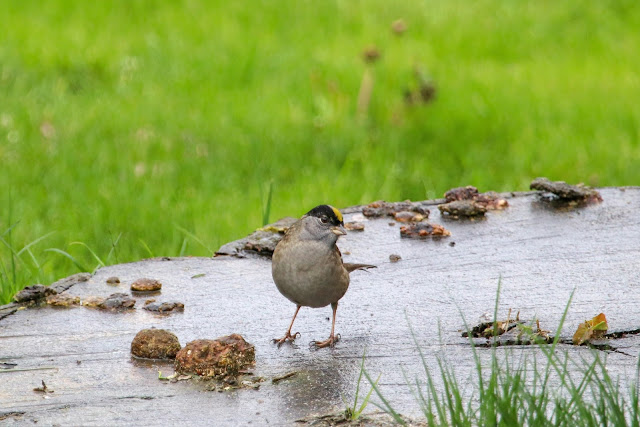 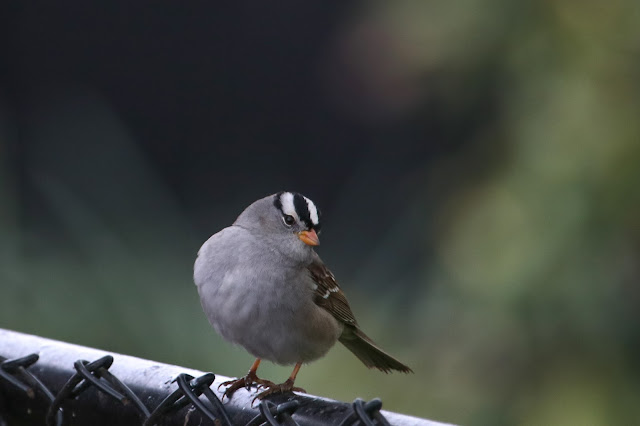 These two went to the same modeling school.