It's not that bad.  I'm supposed to be whining about the lack of birds or lack of diversity or lack of something or other, but it seems pretty okay to me.  This week has been the hottest week of summer with temperatures climbing over 100 with a smoky haze courtesy of fires in British Columbia.  But I still went birding and it was still great.

Let's start with Broughton Beach Wednesday morning.  Aside from the disturbing abandoned baby in the parking lot, things were pleasant. 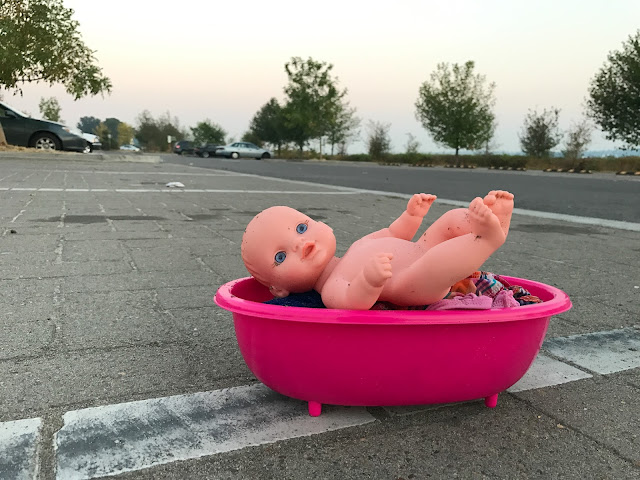 In a bathtub of panties no less. 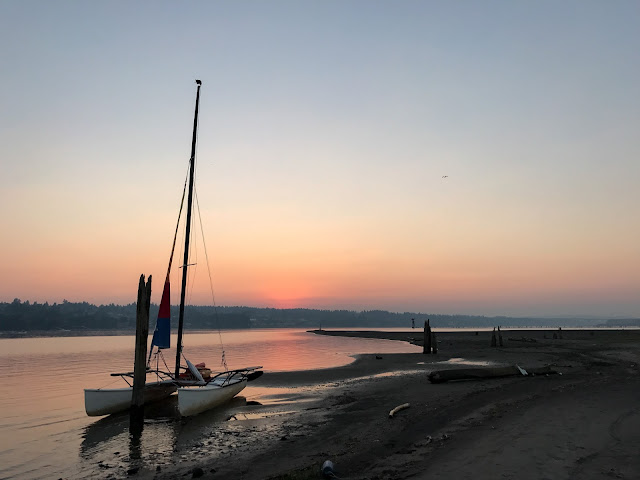 Soon after walking out to the mudflats I heard a Greater Yellowlegs calling.  I crept around to line it up with the smokey orange sunrise. 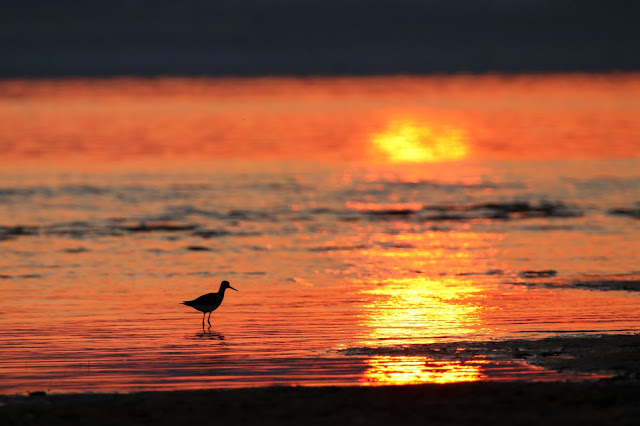 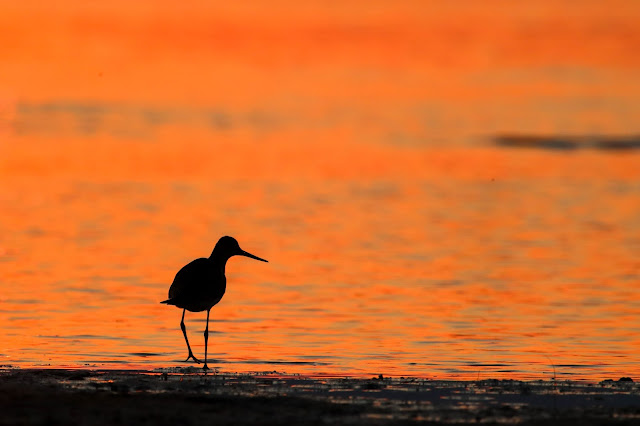 Aside from Killdeer and some distant peeps flying over the river, this was the only shorebird.  I walked down further, checked the beaches closer to the parking lots, then decided to head out to Chinook Landing on the opposite end of my 5-mile Radius.  A young towhee welcomed me. 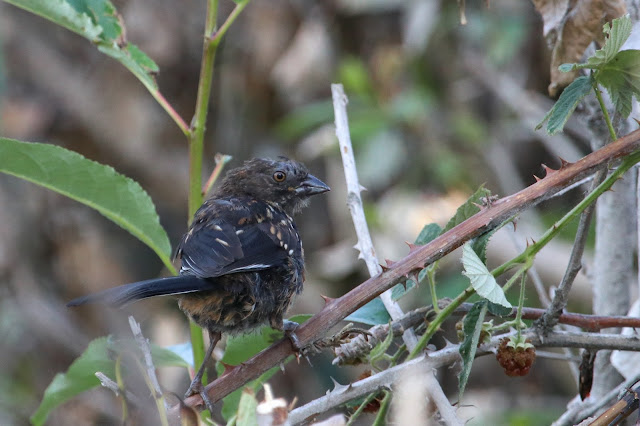 The area west of the boat launch has some good songbird habitat as well as a little muddy beach.  The bonus is that no one is usually there.  There's about a five foot drop off to get to the beach and as I approached I heard birds, then saw birds, then decided to sit at the edge and watch.  First up a Yellow Warbler and an American Goldfinch were disputing claims to some mud. 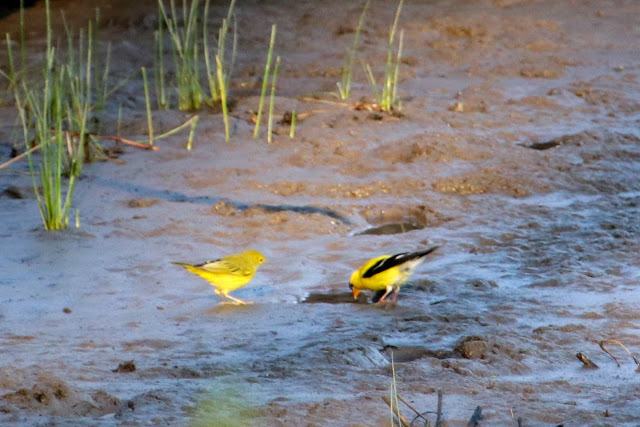 The warbler won this round.  Next up a young Bullock's Oriole appeared in one of the fallen trees on the mud and later decided to take a bath. 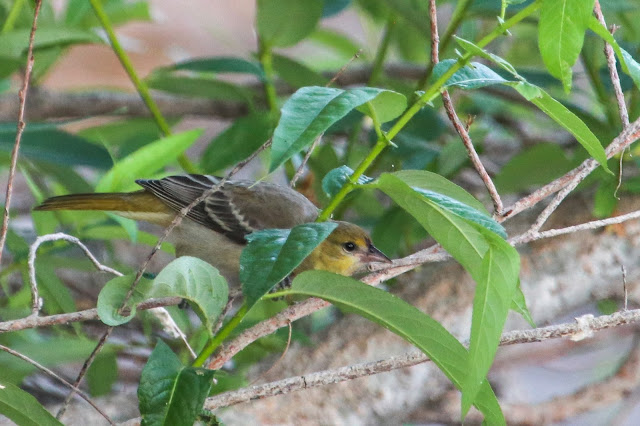 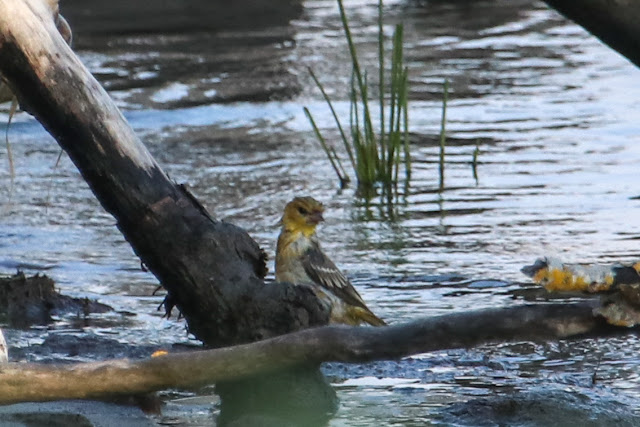 Above me chickadees and White-breasted Nuthatches were finding food in the trees. 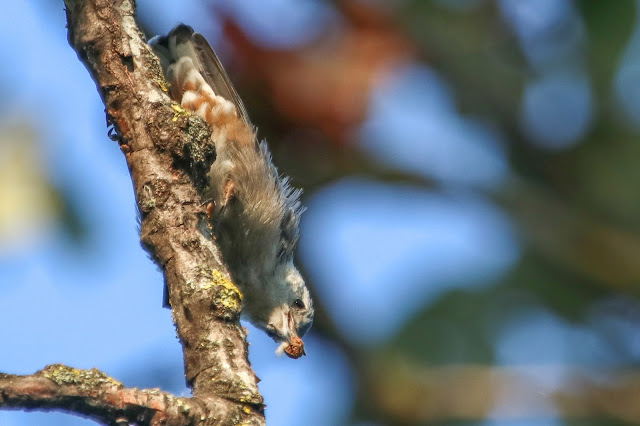 Piles upon piles of Common Yellowthroats were flitting around the shrubs, a female Black-headed Grosbeak lurked on a dead branch, and a Black-throated Gray Warbler got my hopes up for a Black-and-White one.  A Green Heron gave its loud calls from a tree about ten feet behind me while boats pulled out from the landing.  It was a really good place to sit.

But I don't have photos of any of that.  What I do have a photo of is an excellent combo, up in a dead tree across the mud from me. 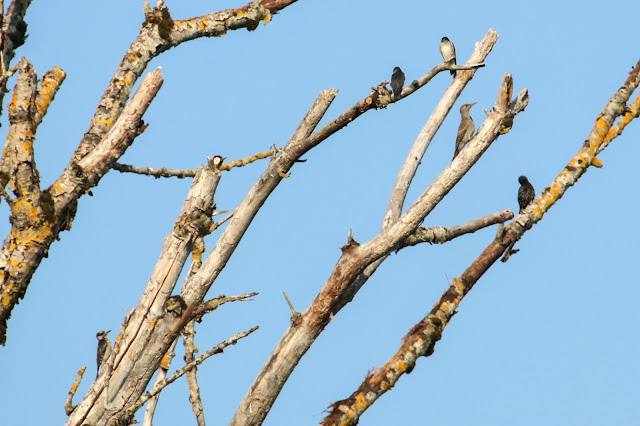 A couple House Finches joined the combo also but those photos are even worse.  Chinook Landing turned out to be a great stop, and combined with Broughton Beach I added six 5-Mile Radius year birds to my list.  Yay!  First ones since early June.

A couple weeks ago I hit up another 5MR spot, Blue Lake Park on a cool and cloudy morning.  I found the Wood Duck population completely replenished with babies all over: 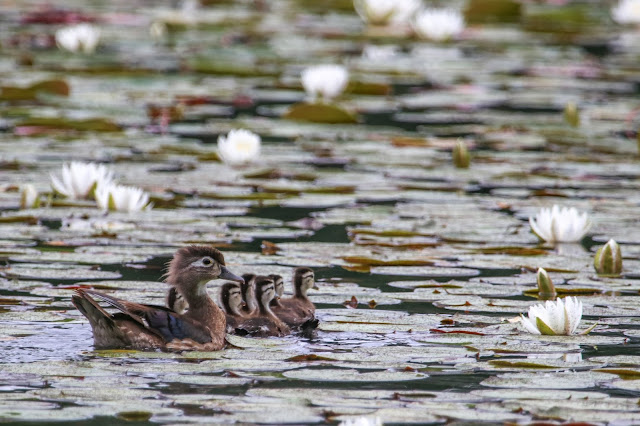 Back in the wetlands area a Great Horned Owl disapproved of my existence. 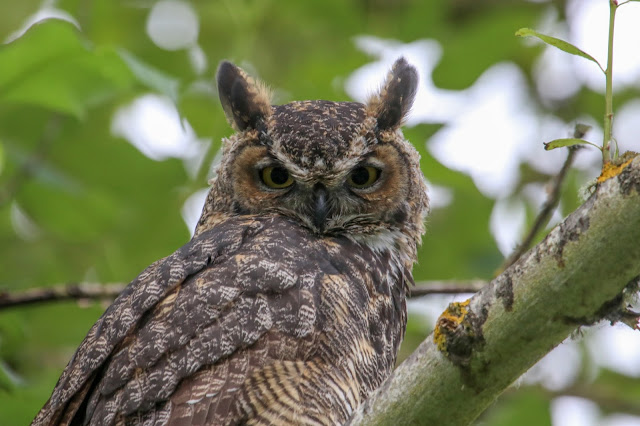 When I was walking back out of the wetlands area into one of the fields I noticed something hopping on the ground, an ugly baby American Goldfinch: 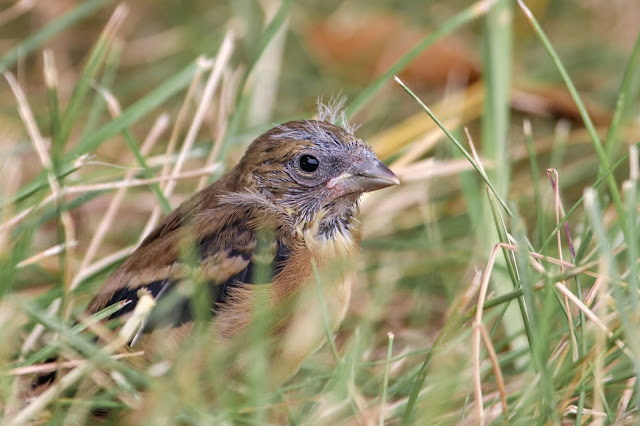 I backed off and watched an adult male feed it a few times.  At one point it decided to go owl baby on the tree and try to climb up it.  It got farther than I had anticipated. 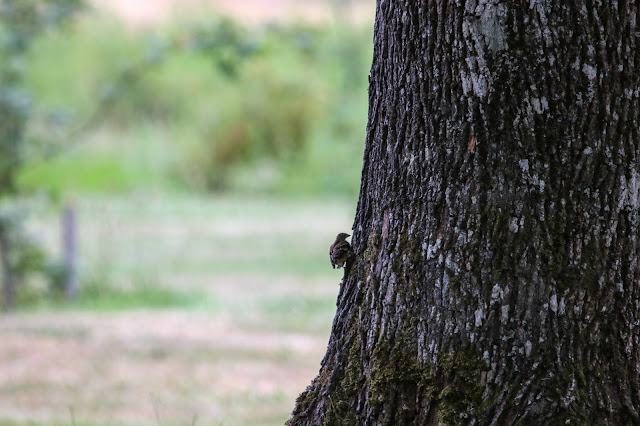 It fell back down. 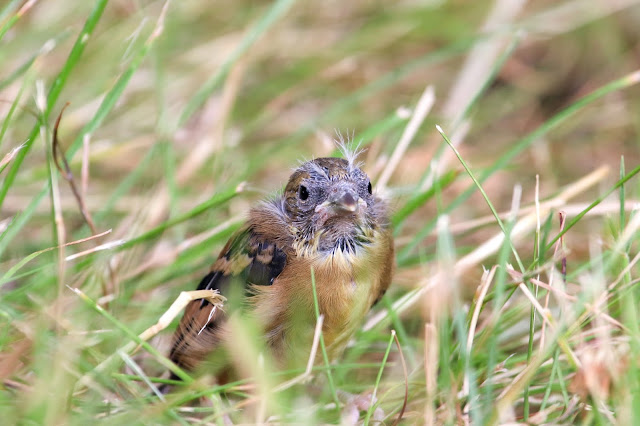 Over at the lake a Belted Kingfisher perched on a branch and did not leave even when it noticed me.  Yay. 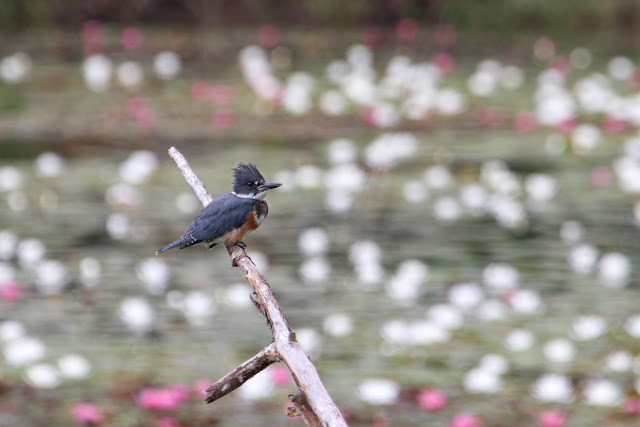 So many water lilies

There were several active bald-faced hornet nests around too, which I think look cool. 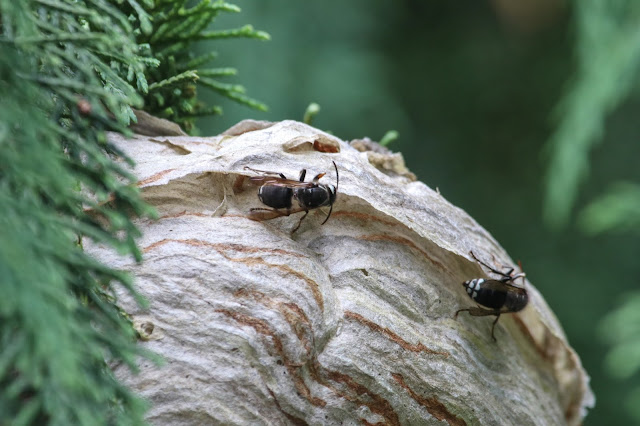 What else?  Oh yeah, last weekend Jacob had to go out to his parents' house in Astoria so I came along for some birding before dropping him off.  We hit up Cape Disappointment and Fort Stevens, both of which were fun.  At Cape D we walked out on the North Jetty pretty damn far and hung out with a bunch of pelicans, gulls, and murres. 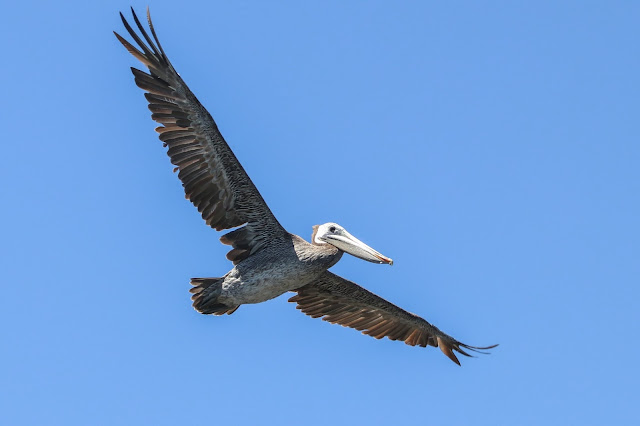 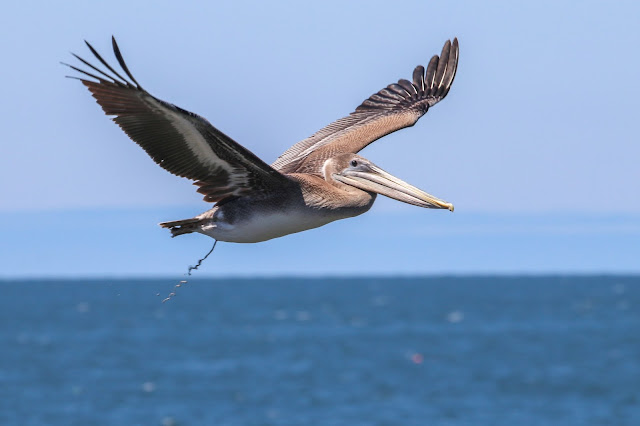 We even managed to find a Rhinoceros Auklet in the distance, which was pretty cool even though we just saw hundreds of them.

At Fort Stevens we tried the South Jetty for shorebirds but had no luck on the beach.  On the walk back not too far from the parking lot Jacob noticed a small pile of Semipalmated Plovers lined up right in front of us.  Yes!  They had a lone Western Sandpiper with them also. 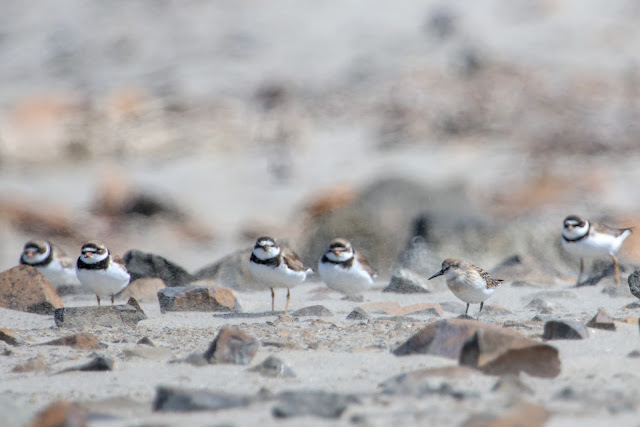 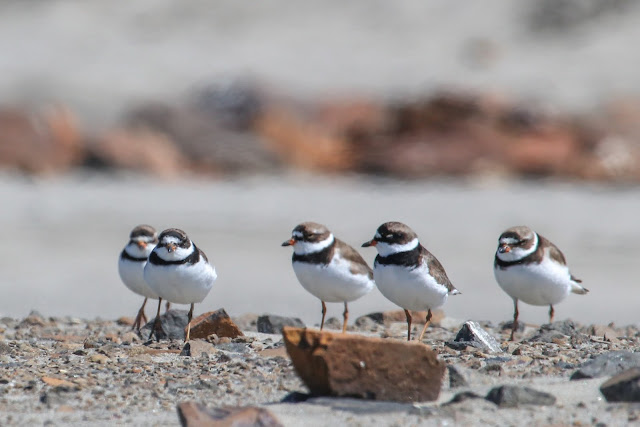 It was a good quick coast trip! 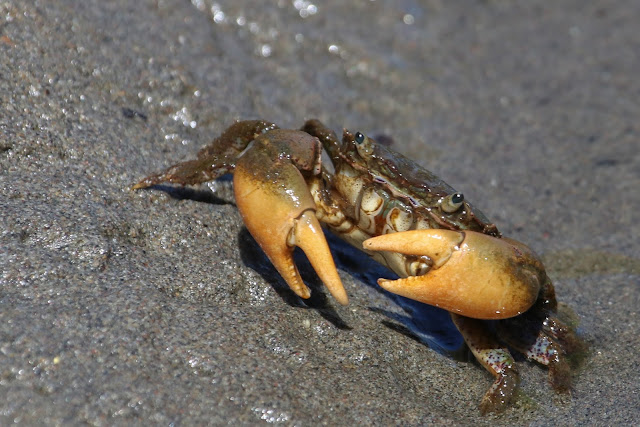 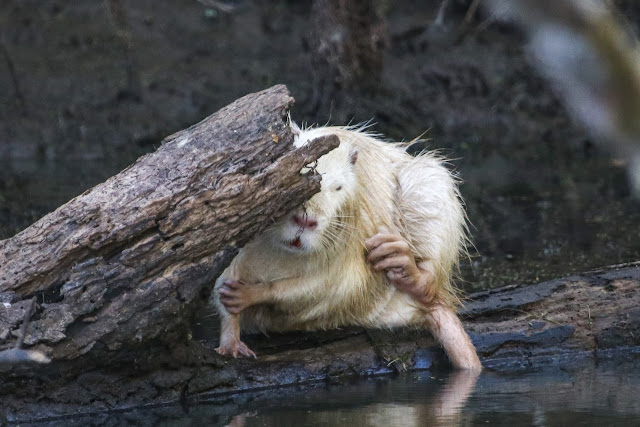 The old albino nutria, this time with babies (not albino), along the Kiwa Trail 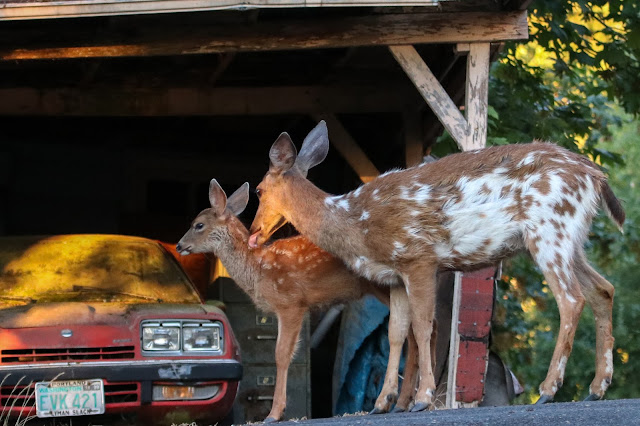 Weird deer, in a driveway near Ridgefield NWR