With summer heading into its final stretch I was itching to get in a little camping on Friday and decided, without any research, to head towards Sisters.  Unfortunately this lack of research led to me driving straight towards a wildfire burning just west of Sisters. 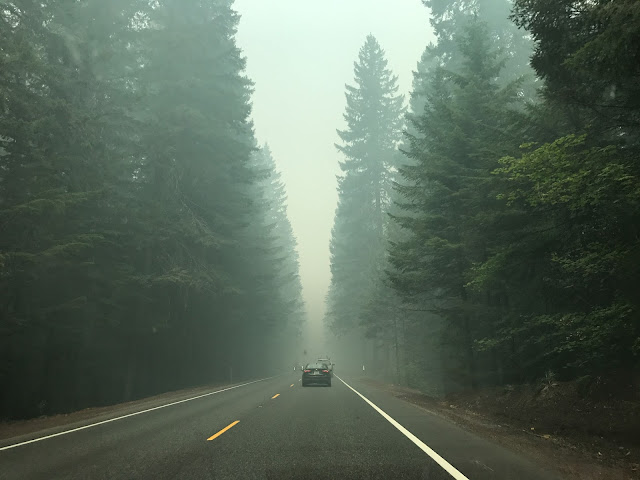 My plan had been to take the long way along Highway 242 so when I turned off onto 126 (which leads to 242) I was relieved to find the smoke clear and blue sky return.  But 242 was closed.  For fire.  Time for a new plan.

I noticed a few roads leading into Willamette National Forest along 126 and took one that looked like it might lead to somewhere I might want to camp.  Barely any humans were detected on these roads, maybe two trucks the whole rest of the day.  At one point three grouse flushed from the road. 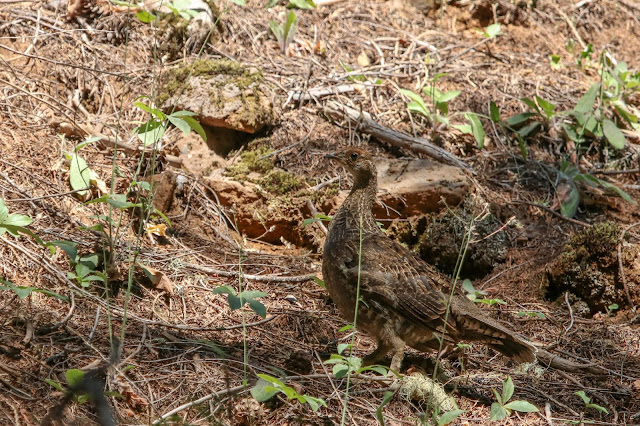 Sooties!  I was not sure what county I was in (it was Lane) but I figured it was a county bird.  Heh.

The lack of people on these dusty roads really increased the appeal for me, along with occasional stunning views of hazy scenery.  I kept exploring and found a Ruffed Grouse standing in the road.  Two chicken species in one day is always nice.  I managed one shot through the windshield before it flew down the brushy hillside. 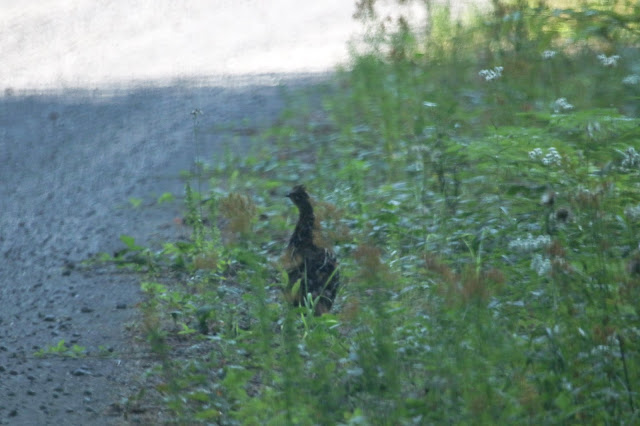 I was keeping an eye out for owls and got excited for a second when I saw a large bird perched on a branch in the woods. 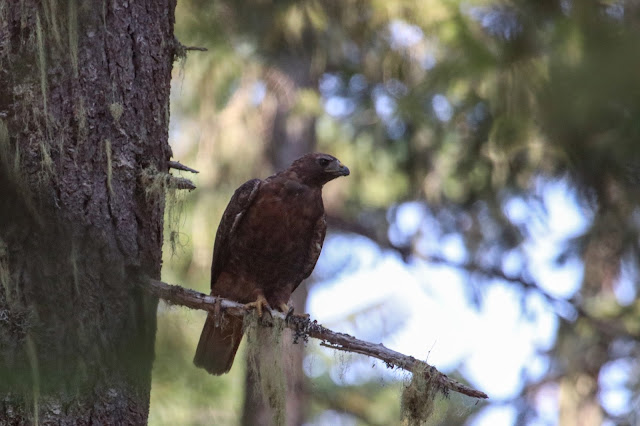 Only a Red-tail but kind of a cool one at least.

At one point I thought I had found as good of a campsite as I was going to find.  The area had burned so there were lots of dead trees and a view of Mt. Washington.  I took the dogs on a walk here but Jake did not like that rough red lava rock.  The decision was made to keep on looking for a better spot.

I kept following NF-2649 up and up and found some lovely viewpoints that would have been amazing without the smoke. 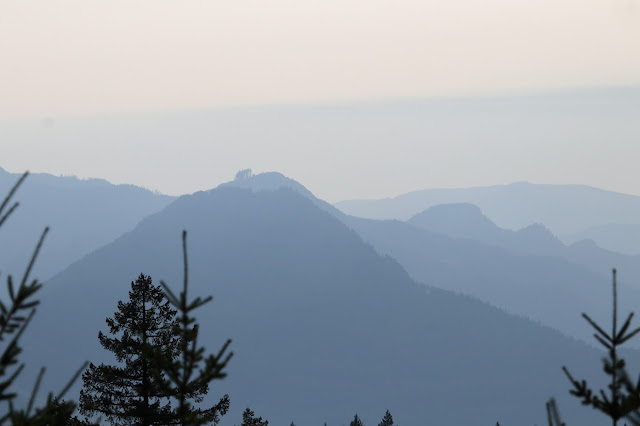 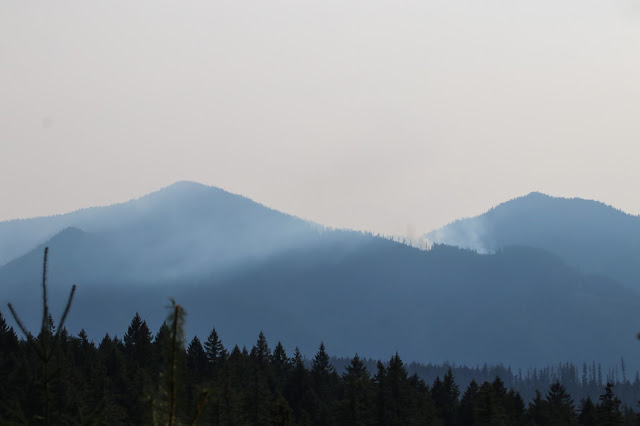 A little ways past the Melakwa Scout Camp turnoff I found another dirt road that looked like it had a good view.  Holy guacamole, I had found my camp spot. 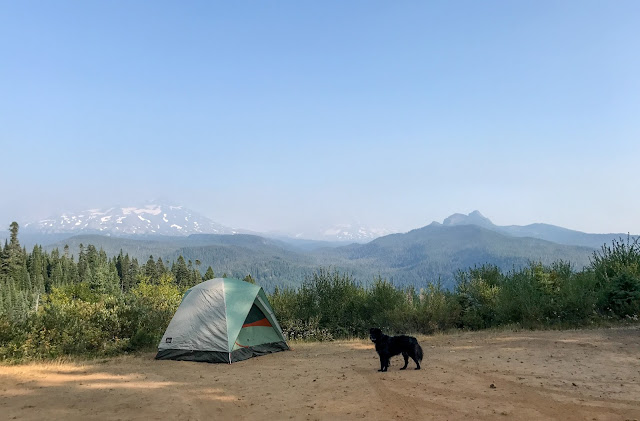 At over 4000 feet elevation it had amazing views of the Sisters and Broken Top, plus soft dirt for Jake's tender feet!  Perfect.  Shortly after I had things set up I heard a vehicle approaching on the road.  A camper van pulled into *my* camp spot much to my disappointment.  The fellow driving leaned out his window and yelled "just turning around!  Had to see the view!"  Jake barked at him the whole time.  It was that one time out of 100 when I actually appreciated that barking.  After that no other vehicles came by, not even on the "main" road.

After dinner and an after-dinner dog walk I set my alarm for 11:00 p.m. so I could try to get some night sky shots. 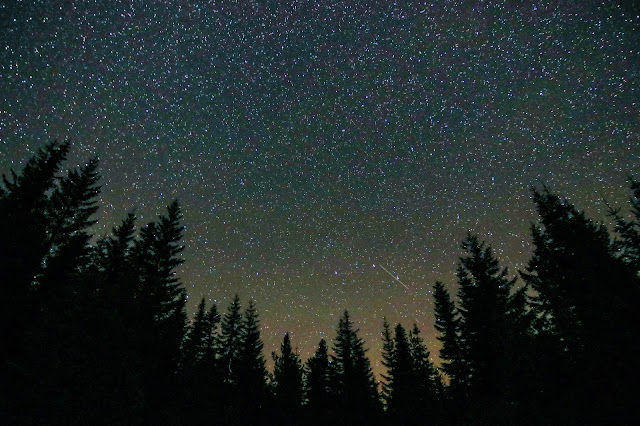 It was hazy but still plenty of stars (and planes) could be seen. 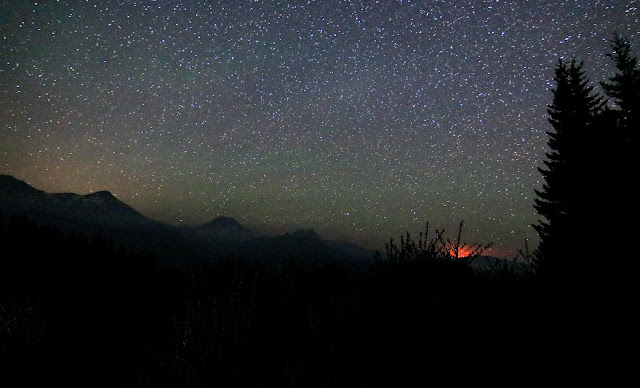 That pink glow above showed up in two photos and then never again.  I tried moving around to re-find it and failed.  It was probably Bigfoot lighting one of his farts on fire.  Or aliens.

I went back to bed and set my alarm for a half hour before sunrise, which I was guessing would happen somewhere over the mountains. 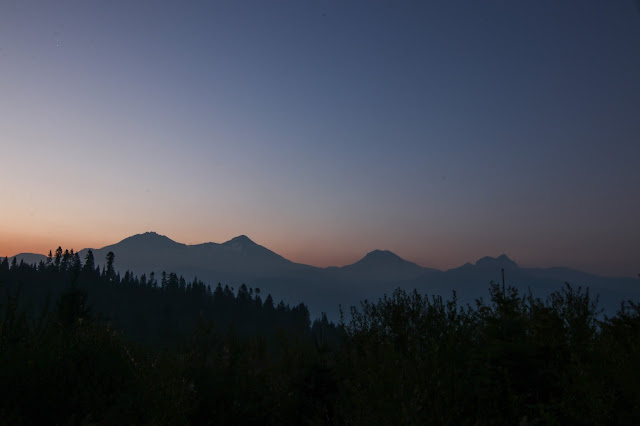 I was moving the tripod around when a nighthawk came flying from the east right to our campsite where it did a full loop, getting as close as ten feet from me, before flying off.  Probably one of my favorite nighthawk encounters ever. 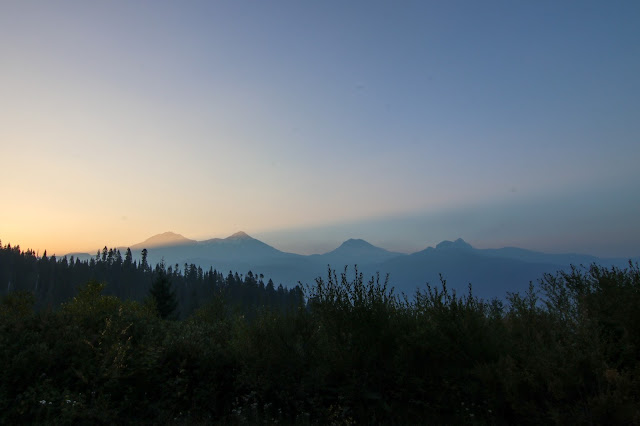 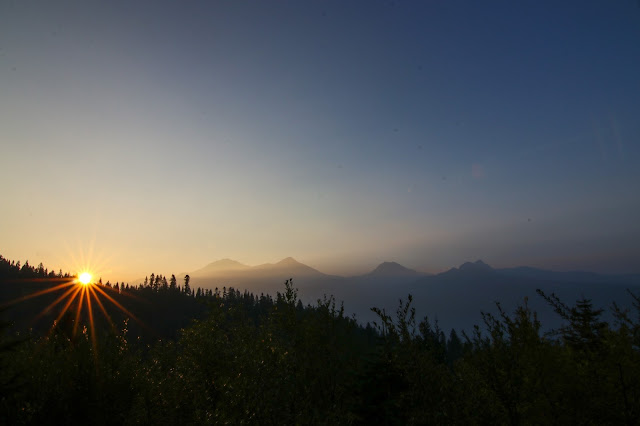 The dogs listened to chipmunks snacking in the manzanita shrubs while the sun rose. I had been planning to take off for more exploring after the sunrise but with the sun came a lot of bird activity in the camp spot.  Warblers, nuthatches, Gray Jays, and more kept me from leaving too quickly. 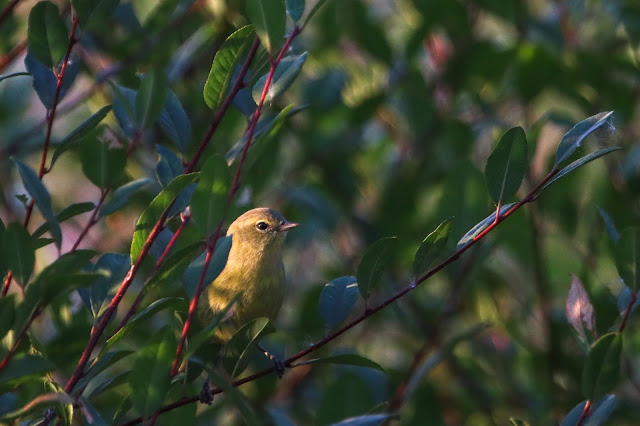 Eventually we got back on the road and found pockets of bird activity here and there.  One great spot held Nashville, Townsend's, and Hermit Warblers.  Another had a feisty MacGillivray's.  Yellow-rumpeds were around along with more Orange-crowneds.  It had been awhile since I'd had so many warblers in one morning. 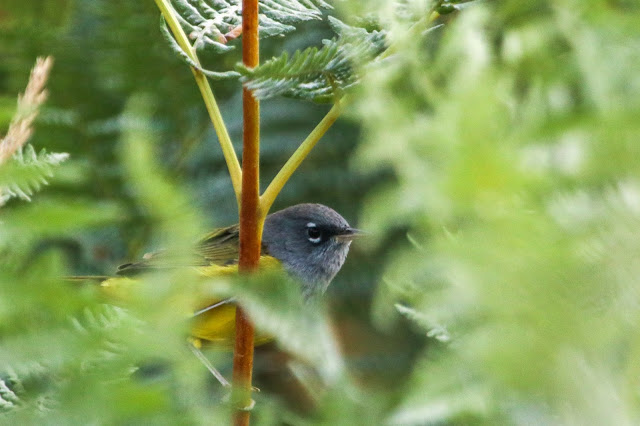 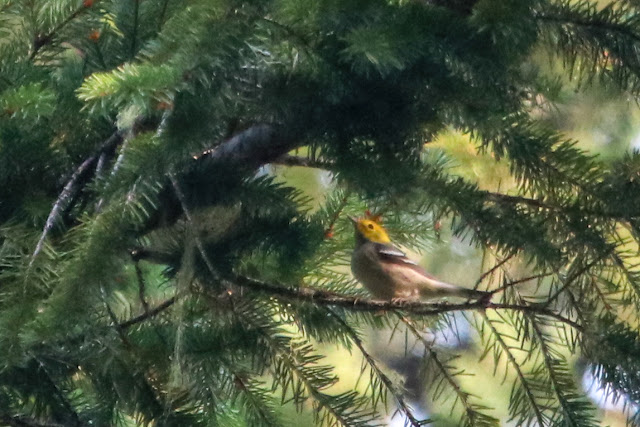 Early on I found this rabbit in the road which I think is a varying hare, aka snowshoe hare, mainly due to the white splotches on its hind feet. 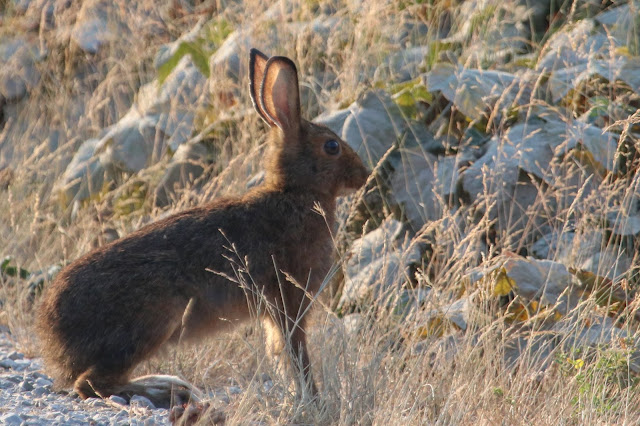 I stopped to walk the dogs up a road I had seen the day before that passes through a large burned area.  It seemed like it should be a woodpecker paradise but I was only able to find one Hairy. 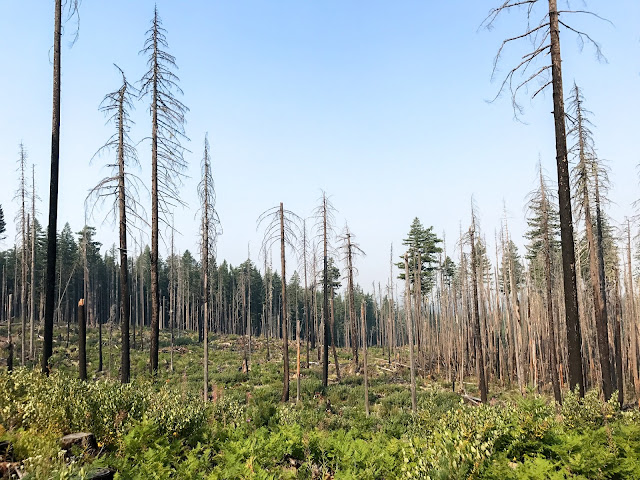 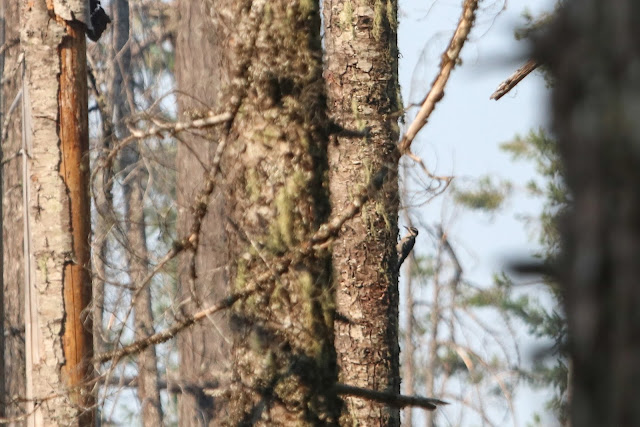 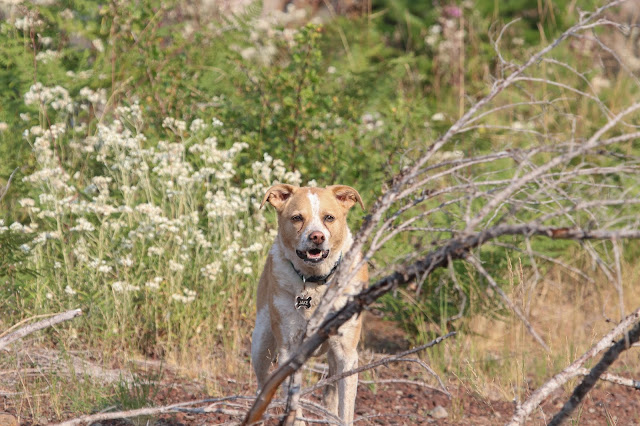 After that walk we kept on going until we hit another interesting burned area. 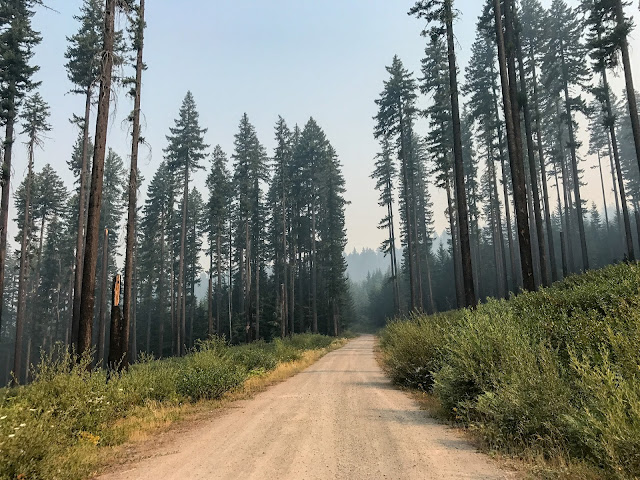 Something rustled in the bushes and when I stopped the car the weird sounds of a Mountain Quail could be heard.  I finally managed to pick out its butt in the shrub, and then its belly, and finally its head. 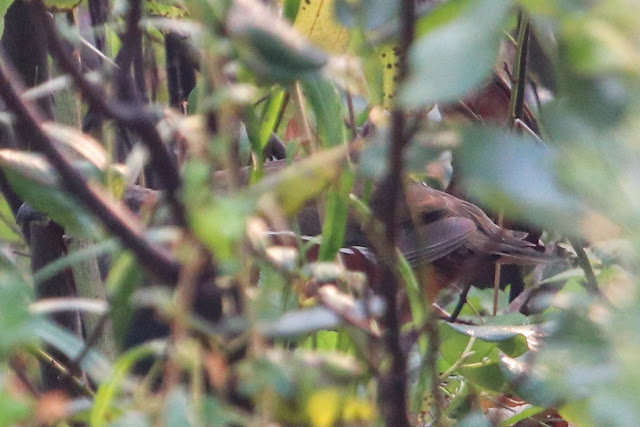 This was a nice find as it holds the ever important title of being a Year Bird, as well as chicken #3 for the trip!

Once I gave up on decent quail photos a House Wren volunteered its services as internet model. 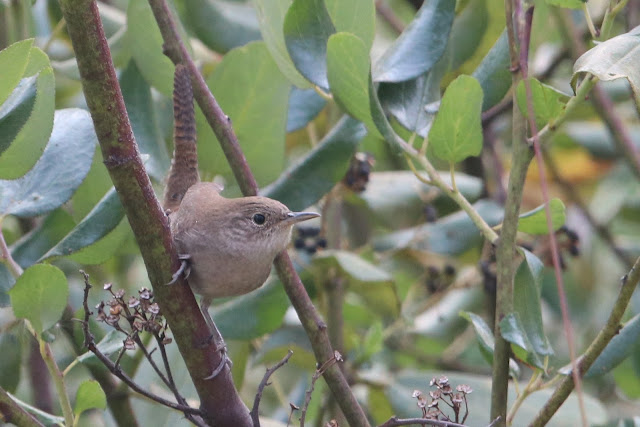 After that I made my way down off whatever mountain I was on (Scott Mountain?) and back to the highway.  Overall a successful camping trip with lots of good birds and beautiful scenery!  Good times!!! 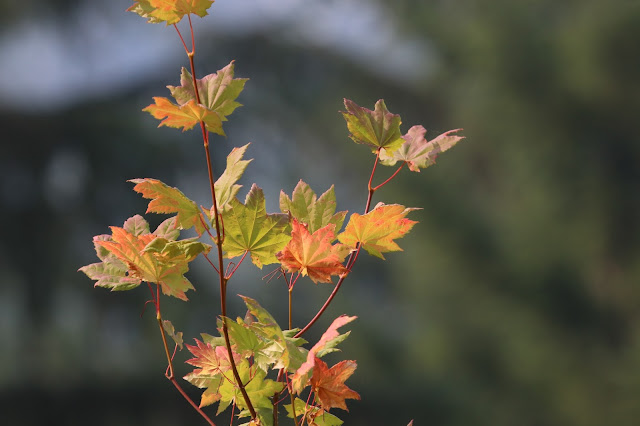