on December 26, 2017
Although I would enjoy forcing leftover cookies and cupcakes on you all I am instead talking about leftover birds.  Per usual I've done some birding this month that never made it to the blog, so here I am to fix that.  Let's start with a morning at Ridgefield NWR a couple weeks ago. 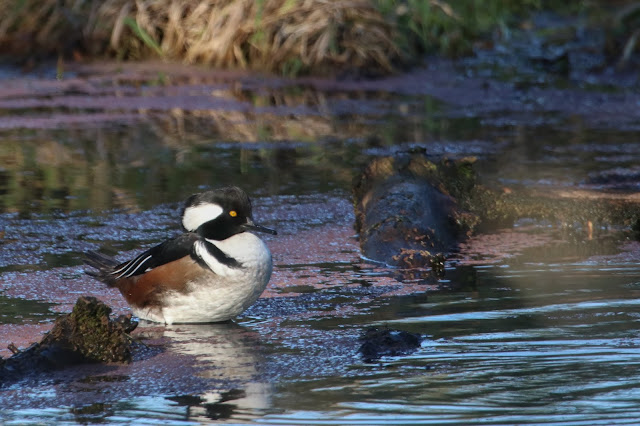 No one dislikes hoodies.

I took 50 photos of this Gadwall because it looked weird to me.  Of course now it looks like a completely normal Gadwall. 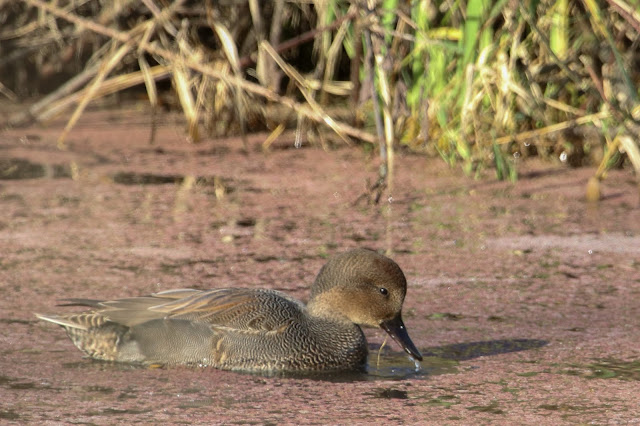 It's common to watch birds murder their meals at Ridgefield.  This is why people go there. 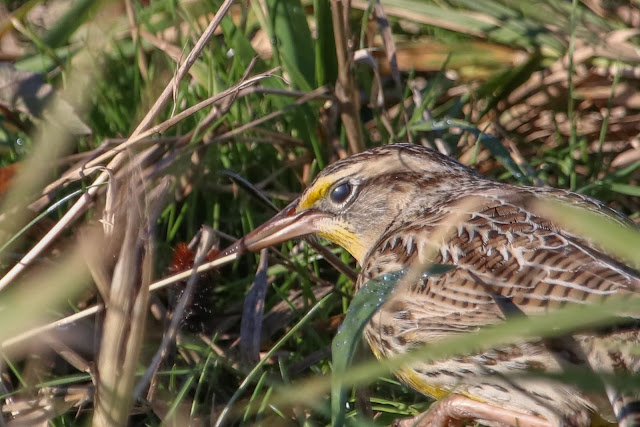 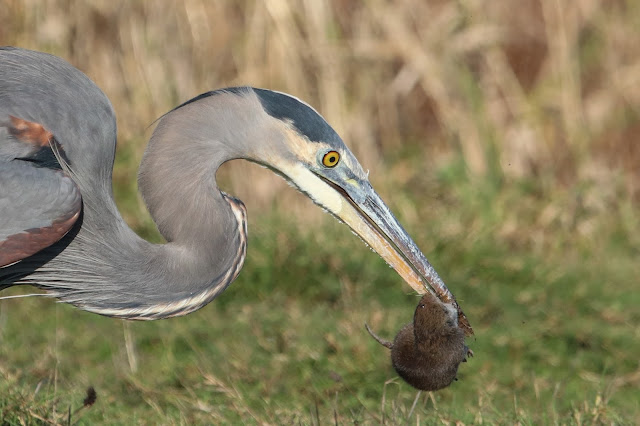 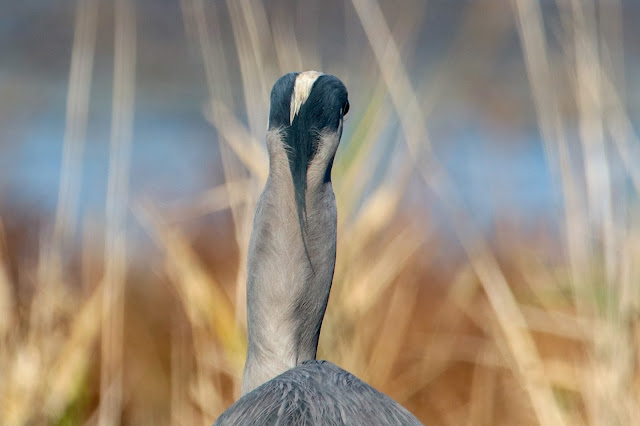 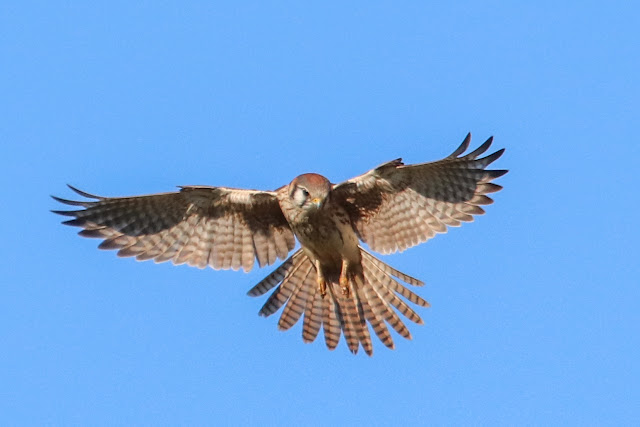 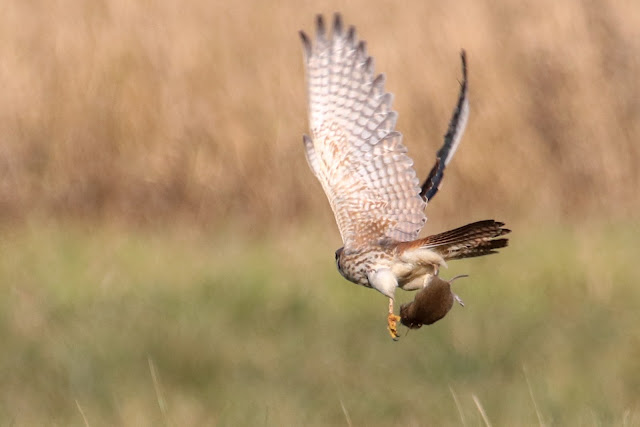 Always a delightful place to spend a few hours.

Another trip I failed to blog about was a search for a reported Snowy Owl at Leadbetter Point, at the tip of the Long Beach Peninsula.  Jacob and I stopped a couple times on our way there, first for some reported Trumpeter Swans at Black Lake in Ilwaco. 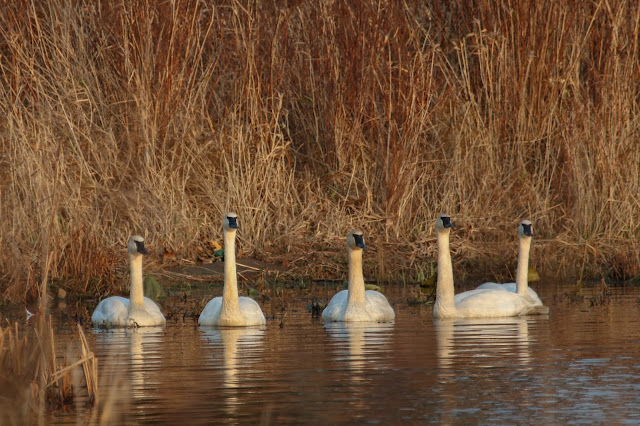 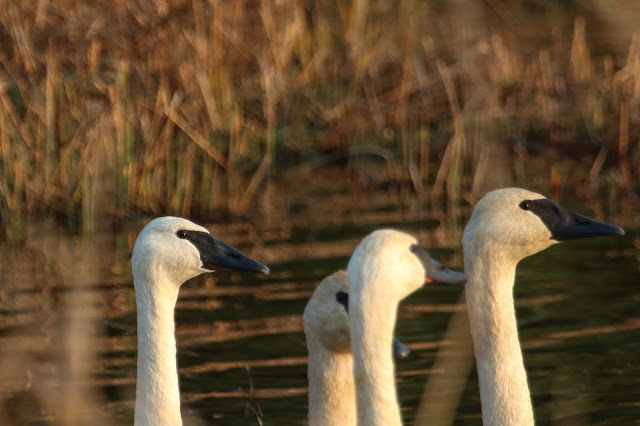 On the road closer to Leadbetter Jacob got to see his first Northern Saw-whet Owl.  Unfortunately it was dead. 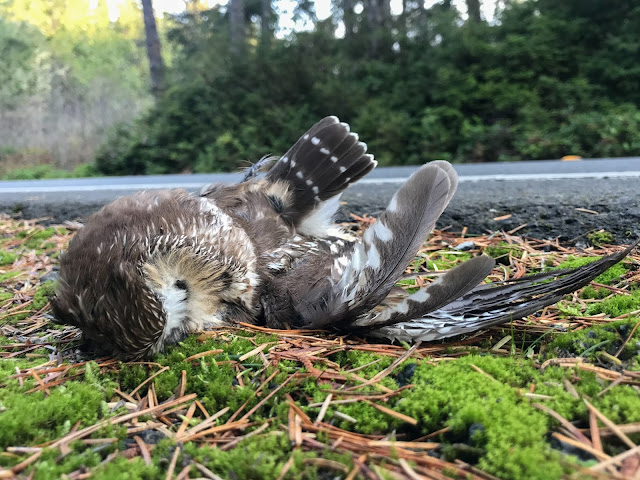 We made it to the parking lot and began the hike out to the beach where the Snowy had been seen a couple days earlier.  There were two possible routes so we chose the shorter one.  A mile or so in we found the trail turned into a river. 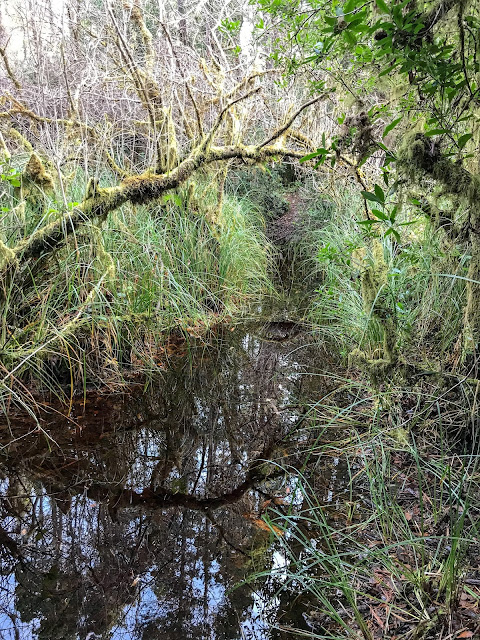 Hmm.  We decided to hike back and go the longer route, hoping that trail would not require a kayak or waders.

No such luck.  We rolled up our pants and went for it. 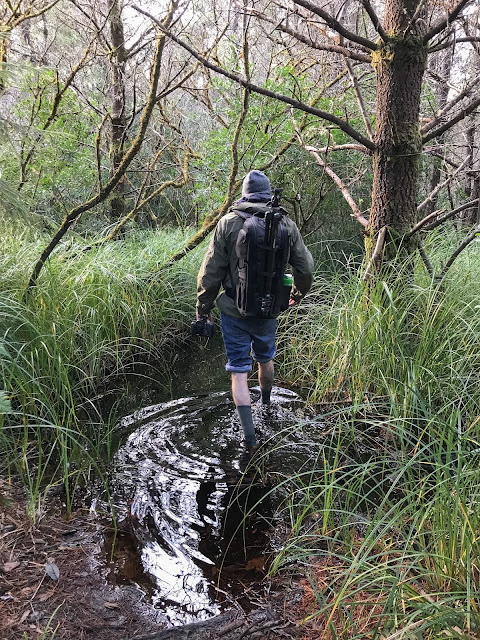 After half a mile of cold cold water ranging from ankle-deep to knee-deep we made it to the beach where the sun was thankfully shining. 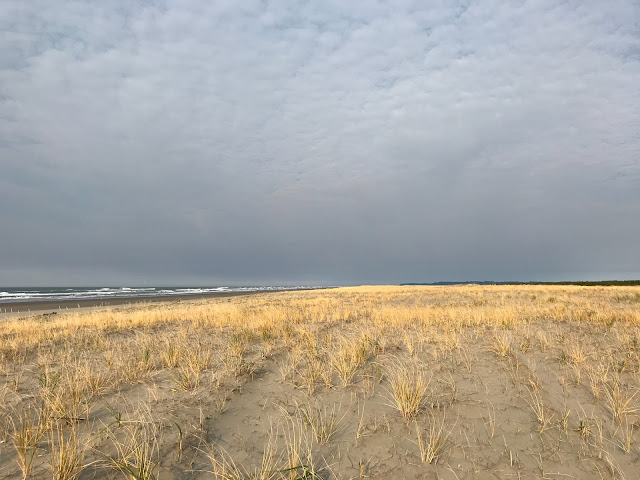 We hiked down the beach checking the whole area for owls with no luck.  We decided to stop and have snacks on a log and found a Snowy bird running along the shore. 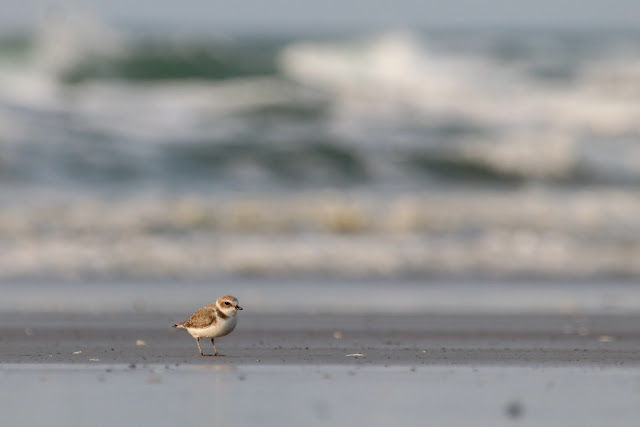 Snowy Plover, why can't you be an owl?

We had to make the hike back on the flooded trail with zero owls under our belts.  Sigh.

Earlier this month I was driving by the high school near my (old) house and saw the field was covered in Cackling Geese.  I stopped to scan the birds for rarities and found one had a neck band.  It read 11* and I knew immediately I had seen this goose before. 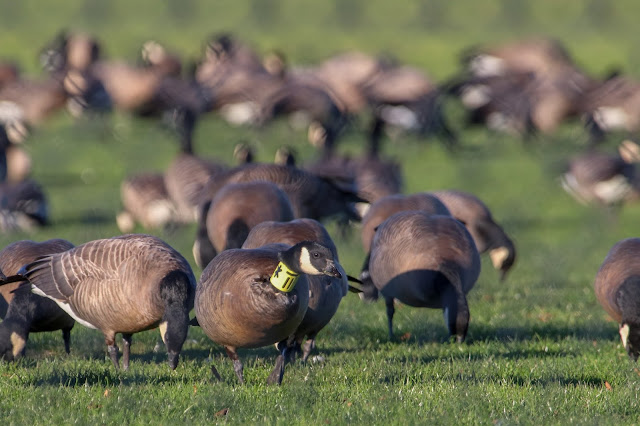 I checked my email for old band submissions and found the one for her. 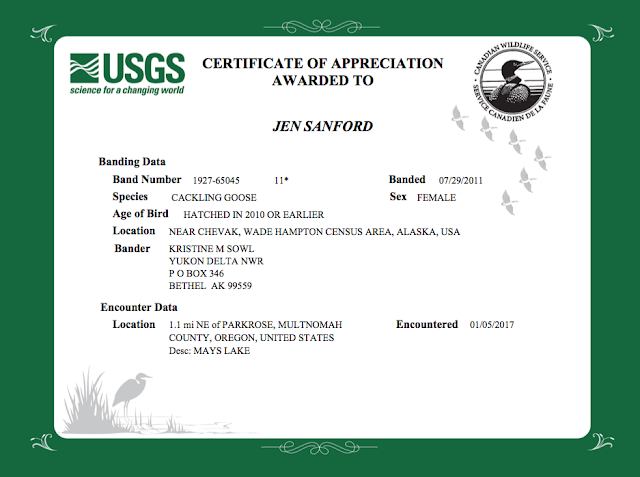 Last weekend Jacob and I drove up to Woodland to do some birding.  No Short-eared Owls as I had hoped but we may have been too late as the Rough-leggeds were already out and about.  We managed to find the Black Phoebe that's been reported since late summer. 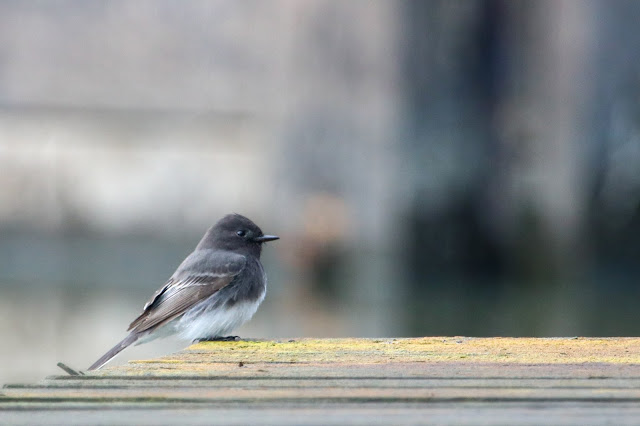 Lots of good birds were around and I picked up over 20 Cowlitz County birds, mostly from the warmth of the car.

Lastly, Jacob's yard is now my yard too so I added a new yard list page to the top of the blog.  Before moving in I had seen 42 birds in the yard, and on Christmas I added my first new one as a resident:  a Fox Sparrow.  Very cool but no photo.  Instead, here's a nifty female slate-colored junco: 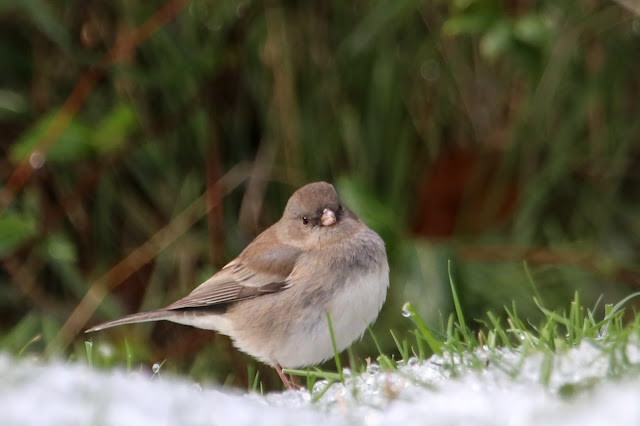 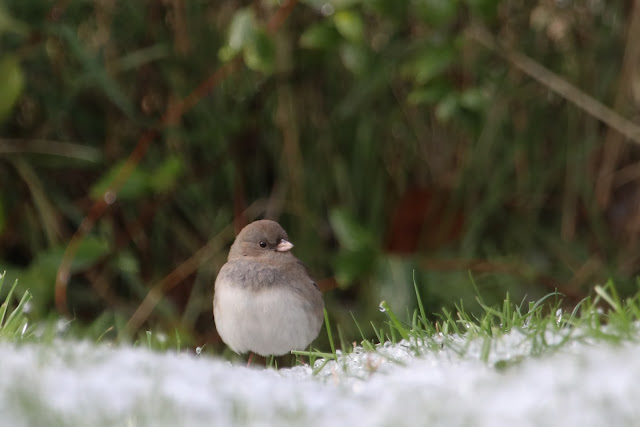 I can't recall ever seeing a female like this one in Portland Vancouver before.  And a Golden-crowned, just because: 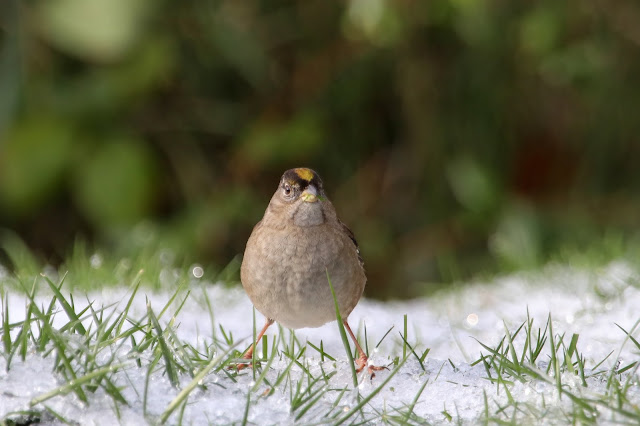