on January 30, 2018
This month has been packed with birding for me, much more than normal.  It's been great.  Let's catch up on all the birds I haven't yet blogged about.

I've been hitting all the hotspots as well as the not-so-hot spots trying to get my county year list over 100.  Success and then some.  One morning I planned to walk the trails at the Ridgefield NWR Carty Unit but as I drove into Ridgefield it started pouring.  The auto tour sounded far more appealing in the bad weather and it turned out to be a good choice. 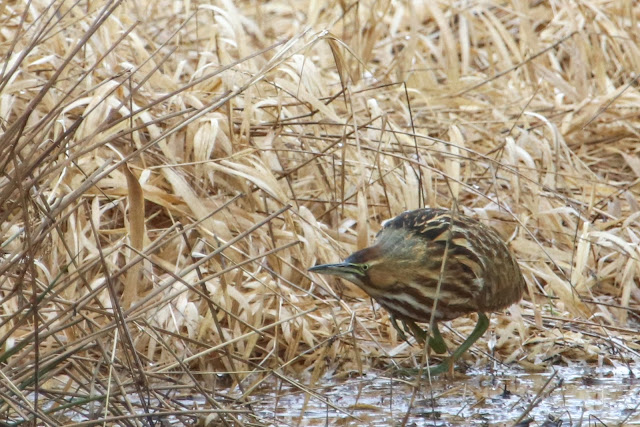 In the forested section of the loop I heard a chip note I couldn't identify and drove myself nuts trying to locate the bird.  Finally I got my bins on a Swamp Sparrow, only my second time seeing one in Clark County. 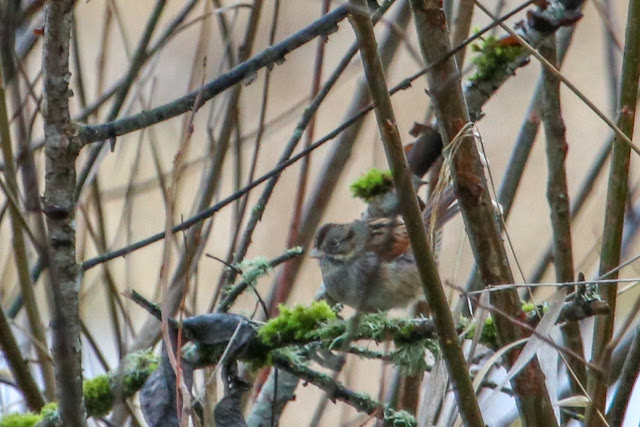 I had another banded Cackling Goose on that day also. 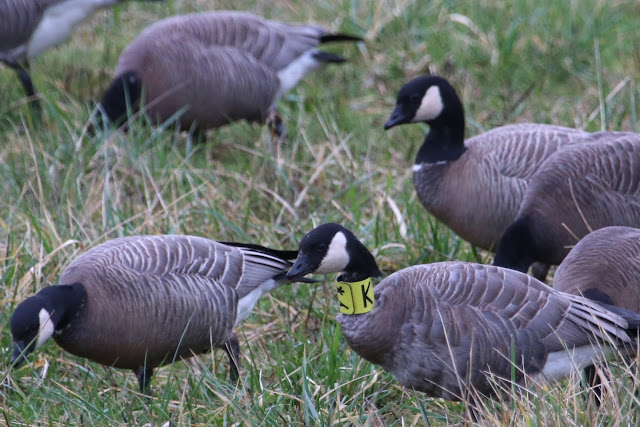 And the gentleman's info: 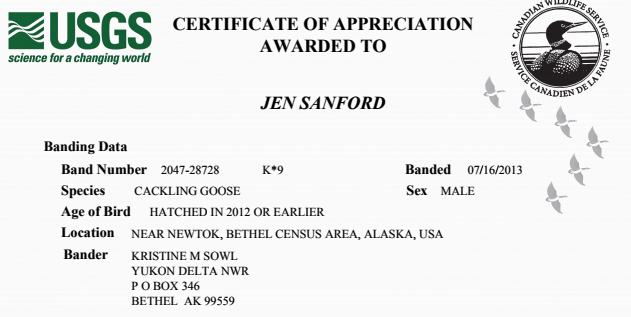 One day I took Jake for a walk at Lacamas Lake for my year American Dipper with a bonus confiding Varied Thrush. 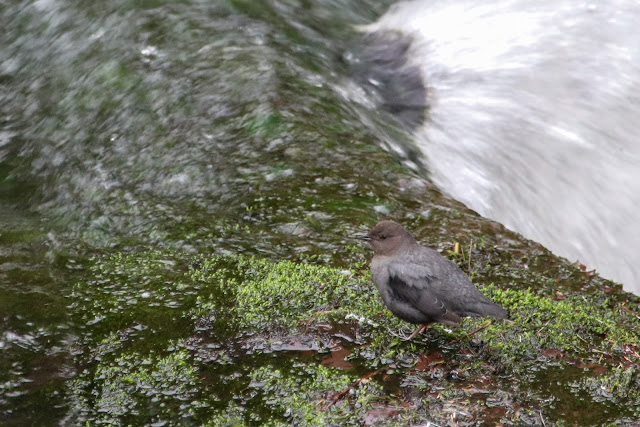 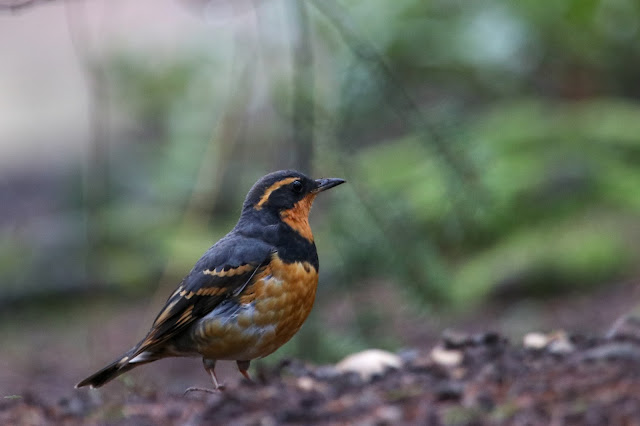 A chilly walk at Steigerwald Lake NWR did not turn up the shrike I had hoped for but rather a pheasant that failed at hiding. 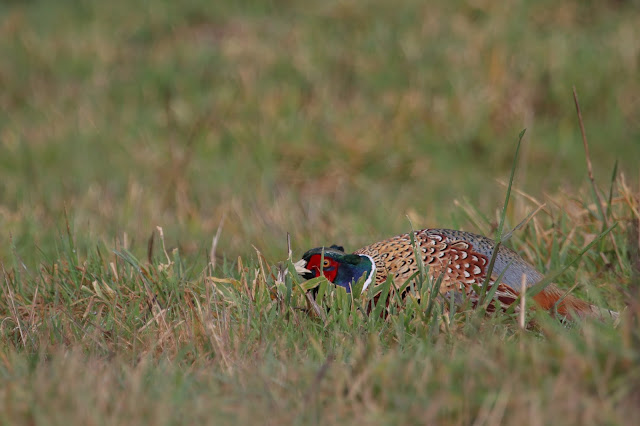 Another afternoon I had another banded Cackler near Vancouver Lake and this one turned to be a bit older. 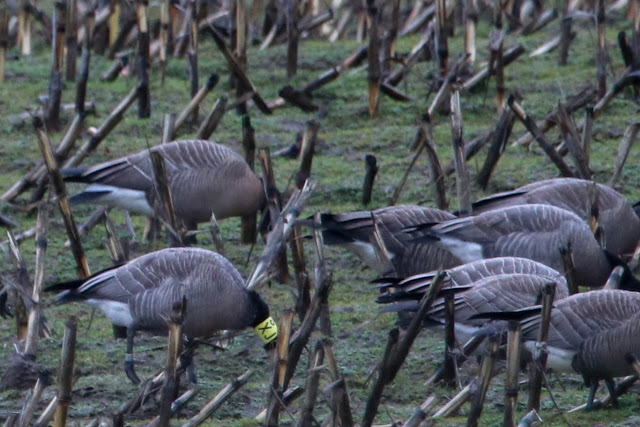 The best part of living in a new county is "discovering" new places that I didn't know existed.  For example, I had no clue you could walk from Marine Park to Wintler Park.  Brilliant.  I tried that recently and found it to be quite pleasant and birdy. 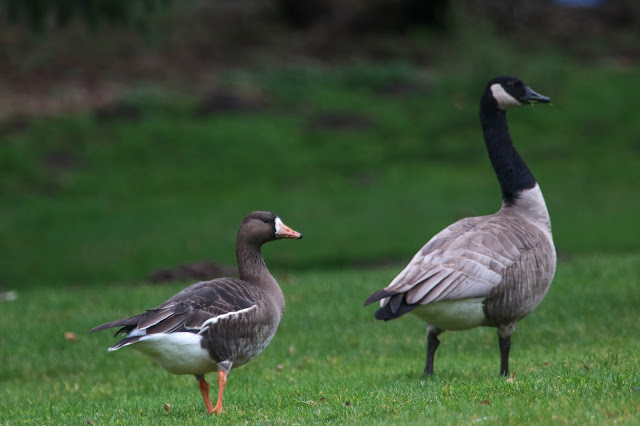 Greater White-fronted Goose is never a guarantee but four of them were spending time with a small flock of Canadas on the lawn by the parking lot.

The trail, a nice paved bike path, passes a wooded area with some flooded marshy sections, before turning back to follow the Columbia River.  Down in the flooded area a Pied-billed Grebe was deciding how to eat this giant fish it caught: 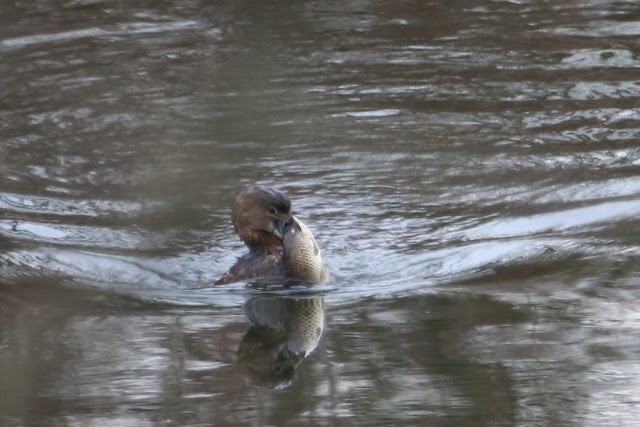 Along the river a huge flock of goldeneyes had gathered, too many for eBird's liking.   In person I guessed there were maybe 50-75 birds, but when I got home and zoomed in the photo I counted at least 160, almost all Common.  My estimating skills need work. 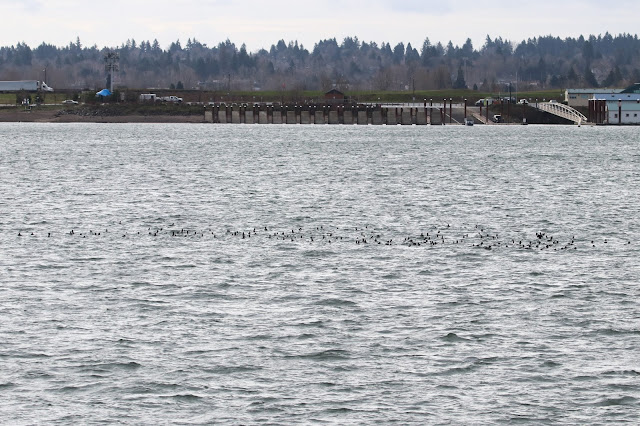 On the opposite side of the path from the river are fancy-ish apartment complexes that seem to provide enough hummingbird feeders to keep quite a few birds around.  One male in particular kept posing for me so I kept taking his photo. 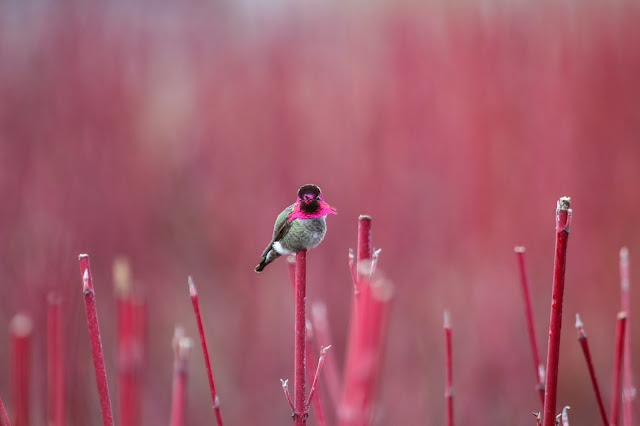 Last week I was in the backyard picking up a pile of dog poop when I noticed something in my peripheral vision.  A junco was sitting about two feet from me looking messed up. 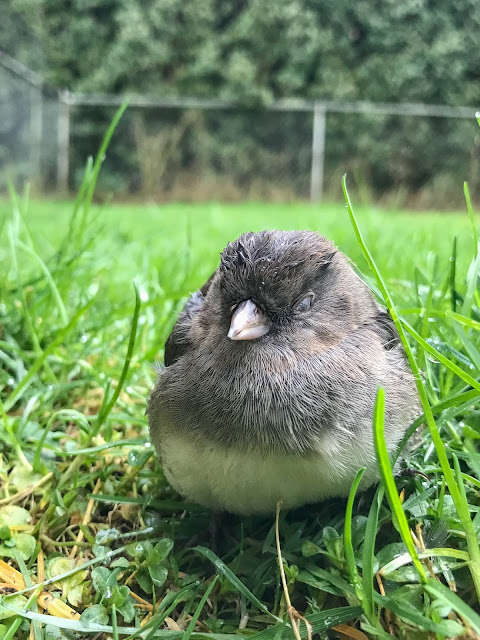 I snapped this one photo before quickly herding the interested dogs inside.  When I went back out to see if she was okay she flew over to a small table, then when I took another few steps towards her she flew down into a shrub and disappeared.

This was extra sad because this is the ONE junco that visits that I recognize, our sweet female slate-colored.  Of all the juncos that visit why did this one have to go die in the bushes?   Oh but she didn't!  Several days later I looked outside and saw her hopping around on the ground, flying up to the tray feeder, flying over to the tube feeder, acting totally fine.  Her eye still looked a little funky but otherwise she seemed to have recovered.  Yay! 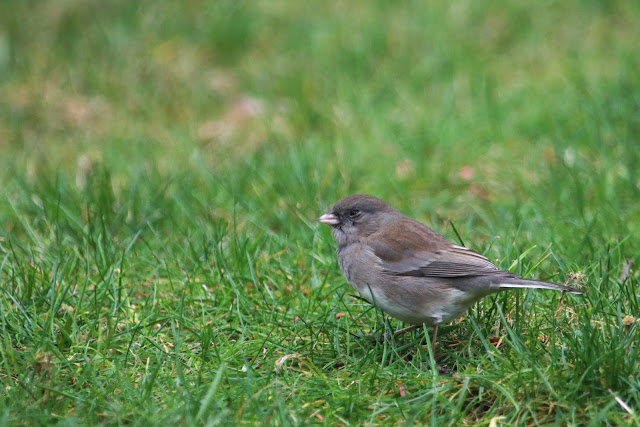 Jacob and I did some birding recently that turned up my second county bird for the year, a Red-throated Loon at Frenchman's Bar. 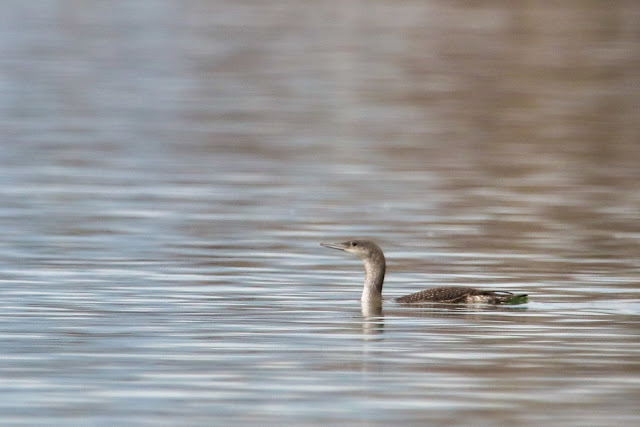 Two county birds in January is a good sign for the rest of the year!

Outside of the county Jacob and I have gone searching for a couple of owls.  One Saturday we took a random day trip to a random cemetery in Yakima County where I found some eBird reports of a Northern Saw-whet Owl.  Looking at a satellite image of the area it looked appealing, not too big of an area to cover with some good trees.

We made the rounds, moving from tree to tree, when I noticed a small dense juniper coming up.  I thought to myself, that owl is in there if it's anywhere.  Quickly we found a dead junco and then some whitewash.  I ducked down under the branches and looked up and there it was. 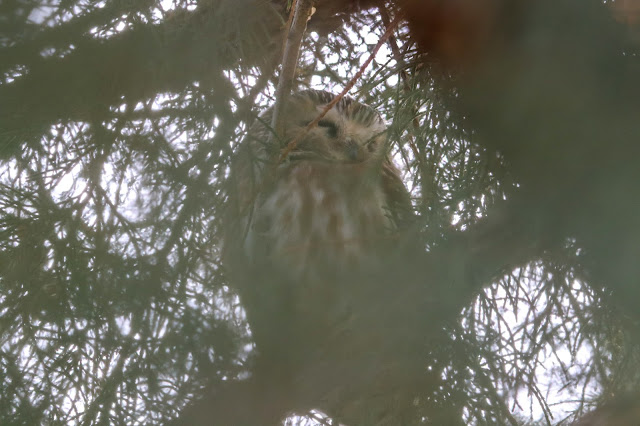 Yeah!  Lifer for Jacob.  That bird barely opened its eyes as we tried to find a decent angle to get a photo, but really there just wasn't one.  That's okay though, it was still awesome to look at. 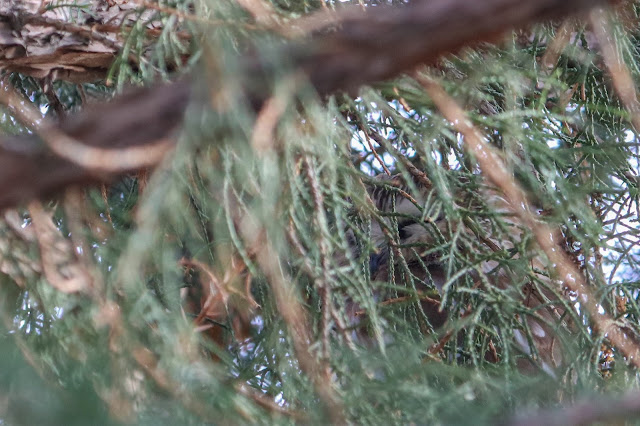 Last Saturday morning we were getting ready to head to the Portland Art Museum when Jacob happened to check OBOL and saw a vague Snowy Owl report from Oregon City.  Google said it was 30 minutes away.  I texted Sarah who texted Eric and the next thing we knew we were in a pack of birders driving slowly up and down a random rural-ish road in Clackamas County.

We saw white domestic birds and white fence post toppers and white things on rooftops.  We did not see a Snowy Owl.  The decision was made to give up.  As we were leaving the area we noticed a guy leaning out his car window photographing something.  It turned out to be Eric and it turned out he found a Northern Pygmy-Owl perched on a real estate sign. 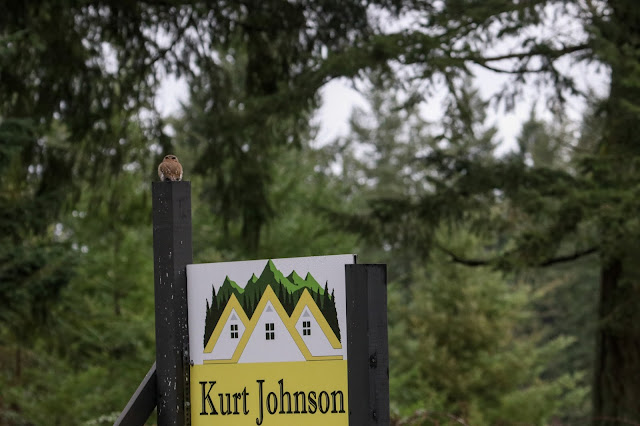 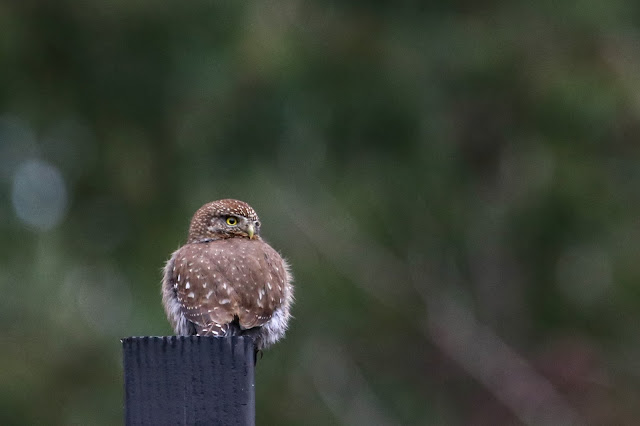 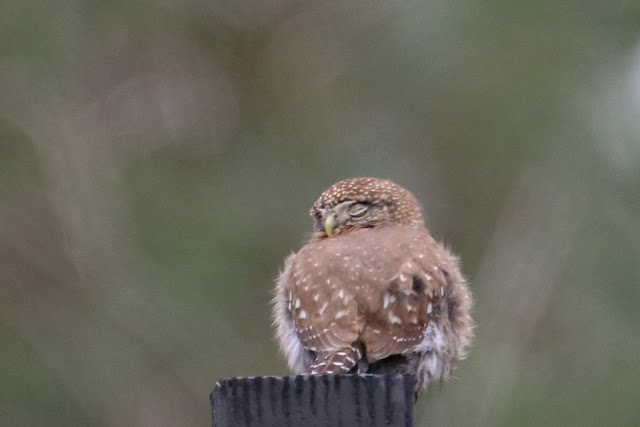 After 20 minutes or so (this was a lifer for Jacob mind you, and both his kids too) the owl flew up onto a higher branch of a nearby tree where it continued to ignore us all. 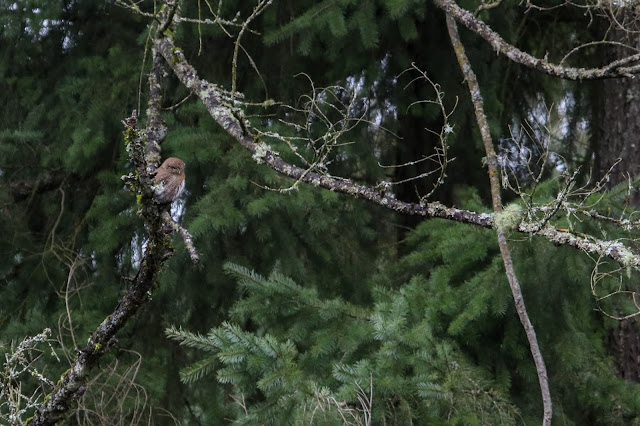 It was not the owl we had come for but it was still a damn good one!  I had not actually laid eyes on one in almost four years, only heard them.  So yay!

Now I am all caught up on recent birds, phew.

One last thing:  remember those banded Snow Geese I wrote about a couple weeks ago?  Well I finally heard back on their origins and turns out they are a male and female banded on Wrangel Island in Russia!  My first non-U.S. banded birds! 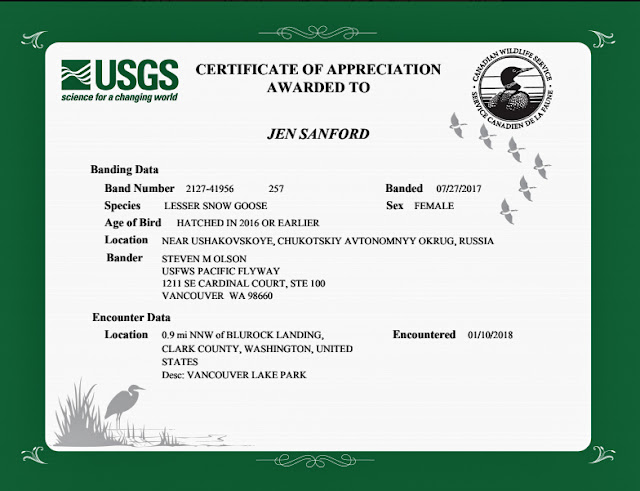 I found an article online here that mentions Wrangel Island had an exceptional number of breeding Snow Geese last year, 100,000 pairs!  My hope that they were a pair seems highly likely now that I know they were banded the same day, and they would not leave each others side.  I love it.