Gilliam County, where few folks dare to (e)bird, has become so familiar to me over the last few years.  It started with an interest in birding the least eBirded county in Oregon, but led to me running winter raptor surveys and making my way into the top 10 for the county.  Of the 51 hotspots in Gilliam, 31 are Oregon 2020 hotspots which you should not use unless following Oregon 2020 protocol.  That means there's 20 real hotspots, at least half of which I suggested.

This has been my last winter of raptor surveys out there, as I trade my routes in for a much closer to home North Portland survey.  Thankfully, sweet memories are everlasting.  So says the shot-up mug at the Fourmile Historic Site, where wagon ruts of the Oregon Trail are visible on the hillside. 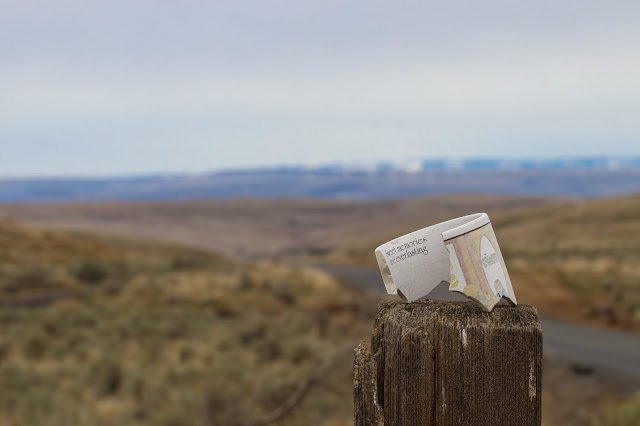 This week I went out to run what might be my last raptor survey there, starting at the I-84 exit for Phillipi Canyon.  I had the boy mutts with me so they could help. 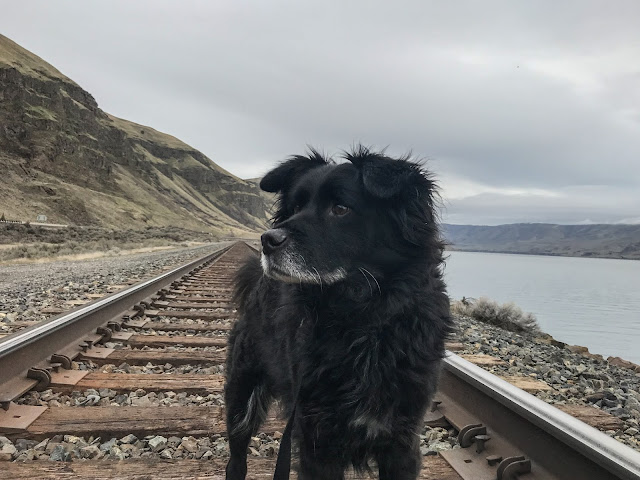 We made our way up the windy road till I heard a sound that I thought was the car being weird.  But no, it was Chukars being weird normal. 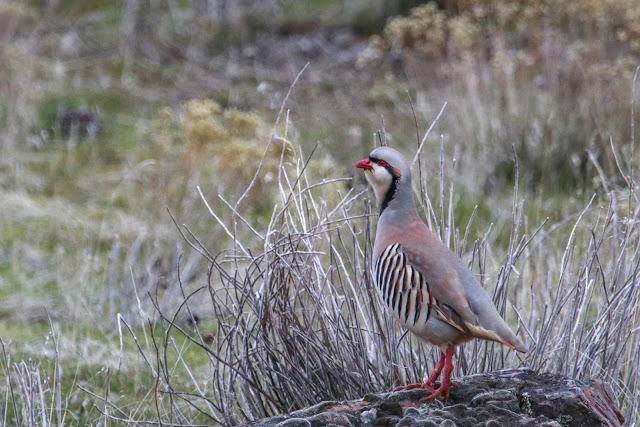 We continued on the route to Blalock Canyon where the views are sweet and a Cooper's Hawk perched, the only accipiter of the day. 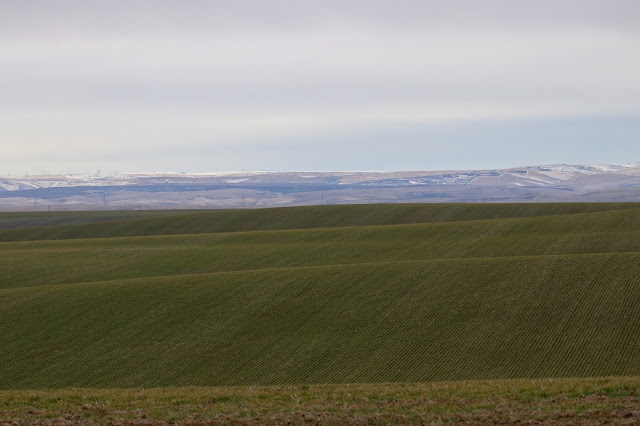 Blalock to Cedar Springs, past the wind turbine holding pen, up highway 19 to Fourmile Road.  This road is usually not too exciting, but of course just as I was thinking it should be taken off the survey I found a Merlin perched on the fence. 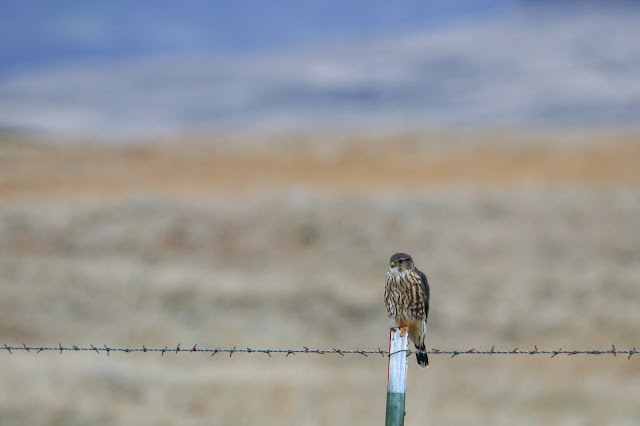 Between the Merlin and the next quality survey bird was a small herd of cattle with lots of youngsters. 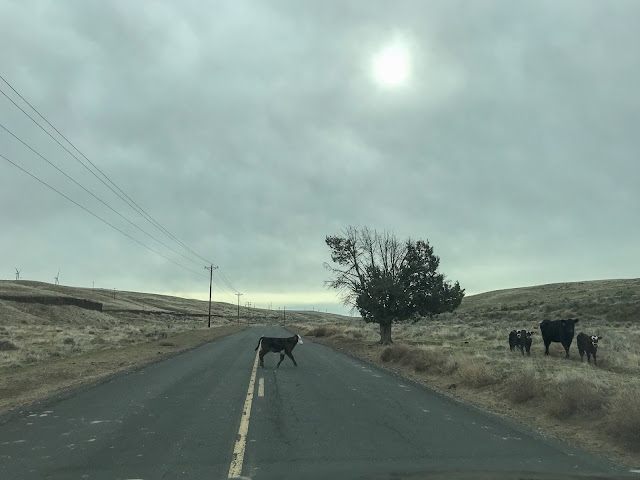 That next bird turned out to be a Golden Eagle! 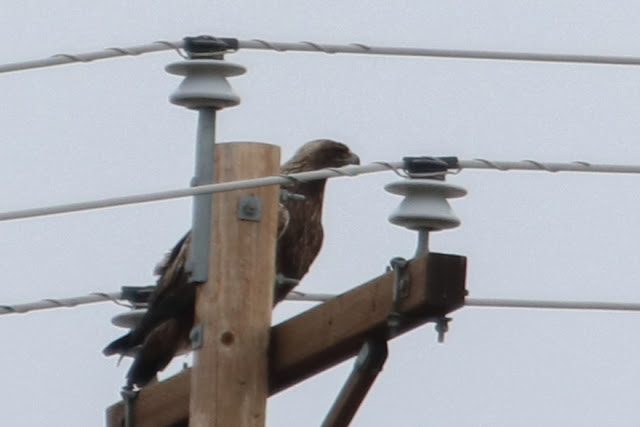 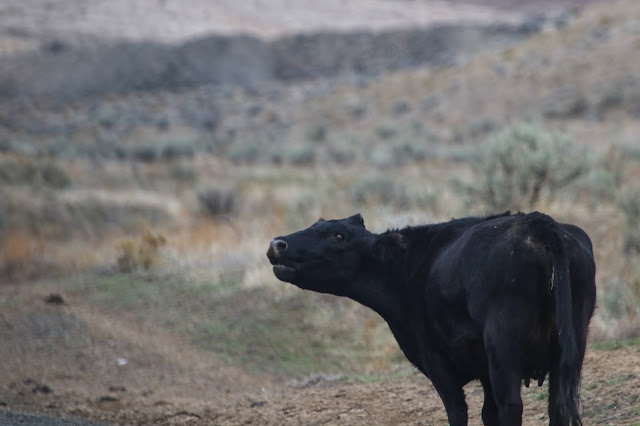 There are always interesting mammals in Gilliam, and somewhere between this cow and Rock Creek I had a few bucks and two yellow-bellied marmots. 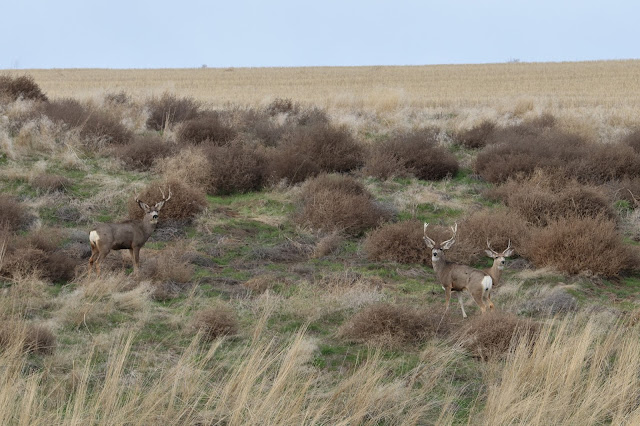 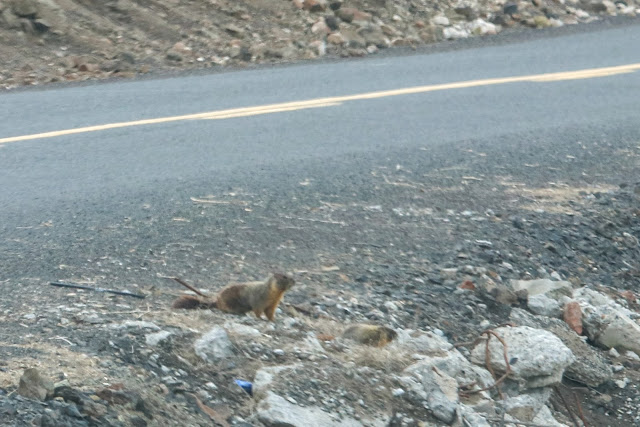 Upper Rock Road tends to be one of the better roads for bird diversity, meaning I often get more than 10 species.  On this day I had 12.  More importantly, I FINALLY found the Barn Owl cave!  I had seen the survey results from the folks who used to do these Gilliam surveys and they always had Barn Owls in this segment.  Despite some effort I had never found the right spot, till this visit. 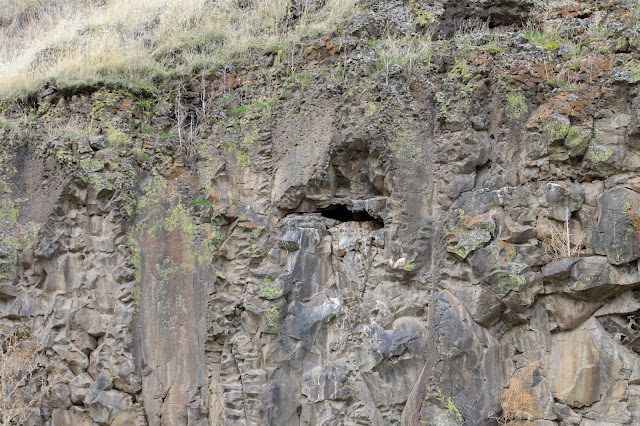 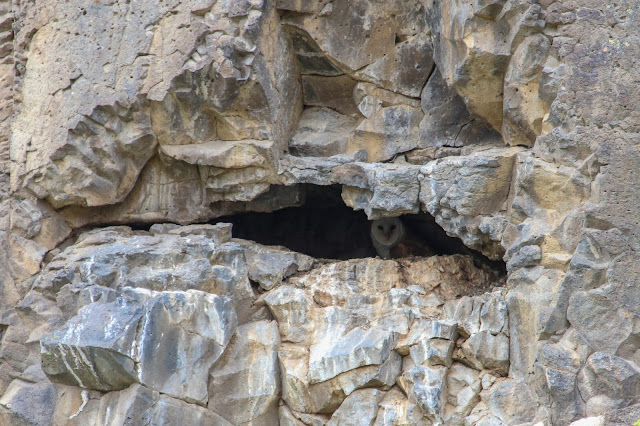 My route travels from Upper Rock Creek to Middle Rock Creek to, you guessed it, Lower Rock Creek.  Lower Rock Creek is where someone amazingly painted a whole container bright orange with "BERNIE 2016" in big letters.  Always makes me smile, since Gilliam is like 65% republican.  From Lower Rock Creek I take McDonald Ferry Road to a bathroom and boat launch.  A stick was interestingly stuck through the window of the bathroom without actually shattering it. 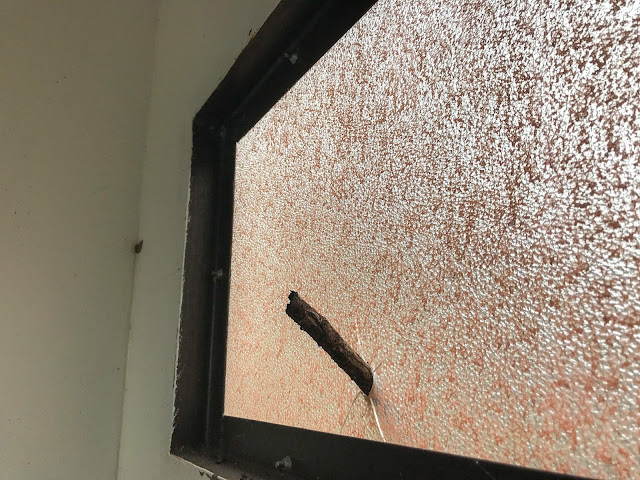 This is a great spot to stretch our legs and sip from the John Day. 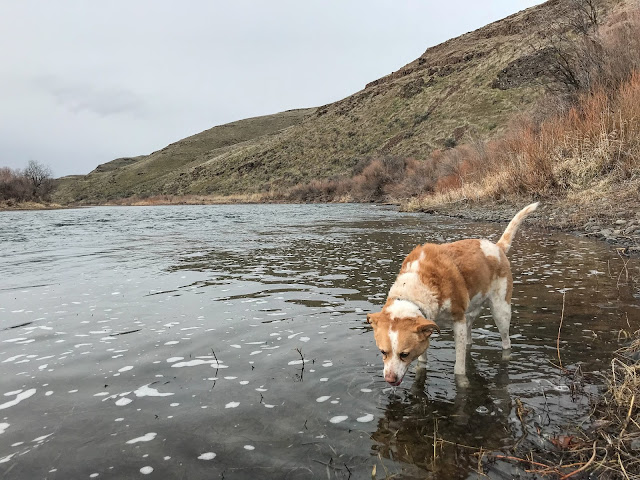 Back in the car, the route returns to Lower Rock Creek, then onto Barnett and Mikkalo and Clem.  From Clem onto Pennington back to highway 19, and south to Condon.  Pennington had a second Golden Eagle of the day. 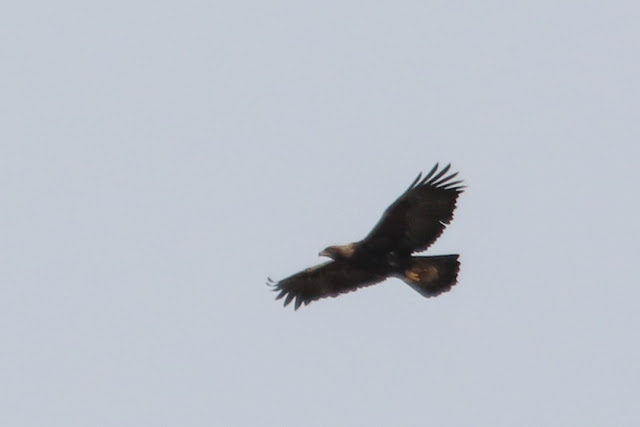 There was also this shrike, that struck me as Loggerhead rather than the expected Northern (in February). 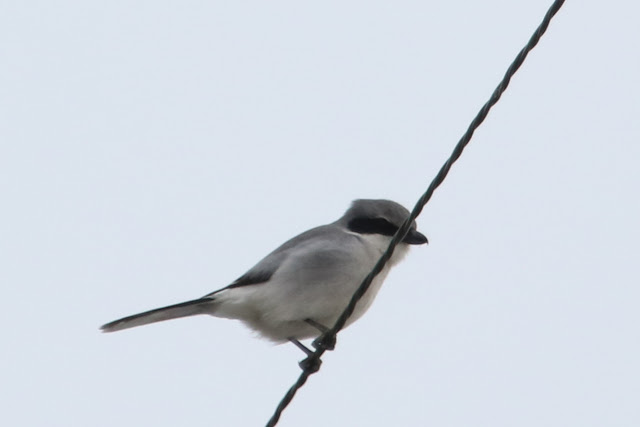 The mask seems thick and the bill is all black, plus the chest has none of that faint brownish barring that Northerns often have. 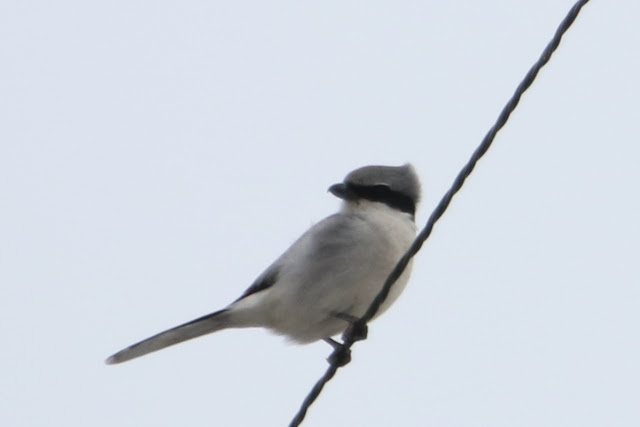 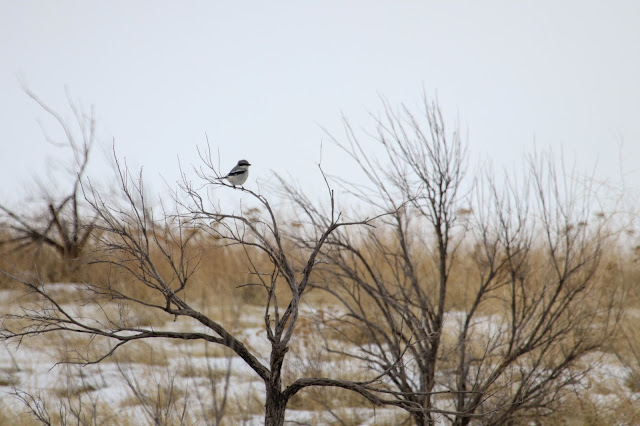 The last stretch along highway 19 got me 8 or 9 Rough-legged Hawks last time, but only 2 this trip.  I had a total of 5 all day which seems really low. 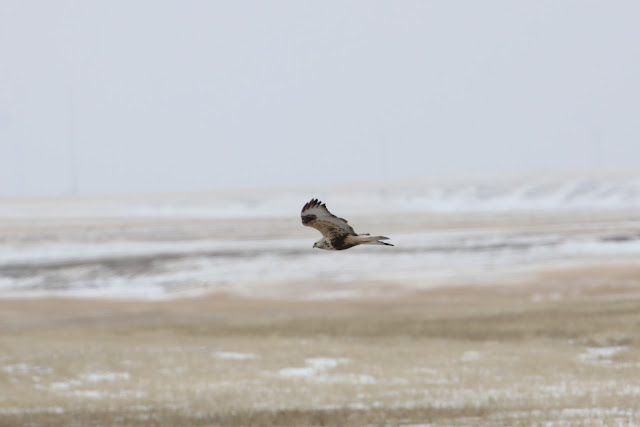 I ended the survey in Condon with 40 raptors for the day including Red-tailed Hawks, American Kestrels, one Northern Harrier, one Merlin, two Golden Eagles, one Cooper's Hawk, and one Barn Owl.  Better than previous years but not as good as earlier this winter.


Overall a good day in Gilliam!  It may have been my last survey (depending on if I do the optional March ones) but it was definitely not my last trip out there.  As always in Gilliam, good times!!! 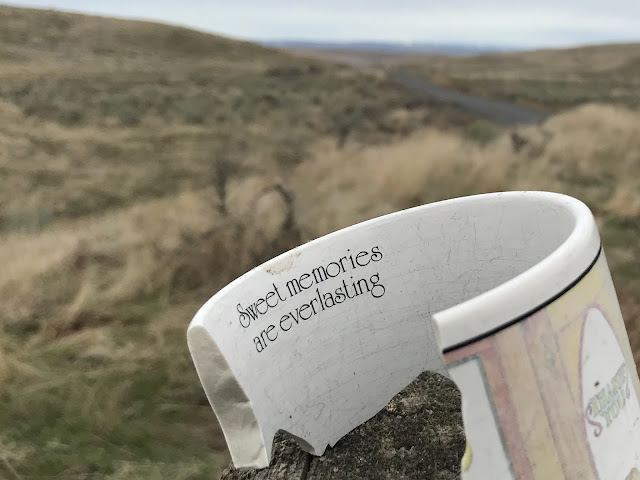