There are a few things I miss about Multnomah County birding, like hitting Mount Tabor every morning once migration starts, or hitting my old patch Blue Lake for a solid morning of owls and other birds.  One of my favorite spring rituals was going up to Larch Mountain for year grouse and scenery as soon as the snow is cleared.  Luckily, Clark County has its own Larch Mountain, though I had never seen or heard grouse on it before. 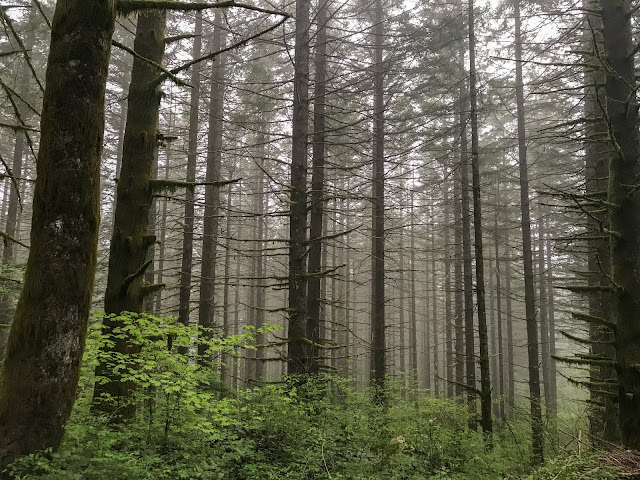 Jacob and I decided to head up there recently to see what scenery, wildflowers and YEAR BIRDS we could find.  We took L-1000 into the forest, stopping for various songs and flowers.  At one point I heard a rustling in the low shrubs and we waited to see the squirrel or towhee or whatever pop out.  Except not this time!  This time it was a Ruffed Grouse!  And he walked right toward us and up to the truck. 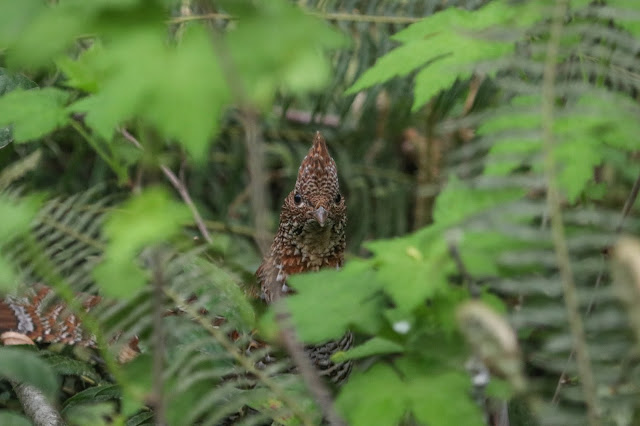 He was so close to the truck I couldn't take anything more than a phone photo at first.  Jacob got out to try get some shots and the grouse casually sauntered back into the shrubs.  When Jacob returned to the truck, the grouse came back out and walked up to my side again to show me his fancy tail. 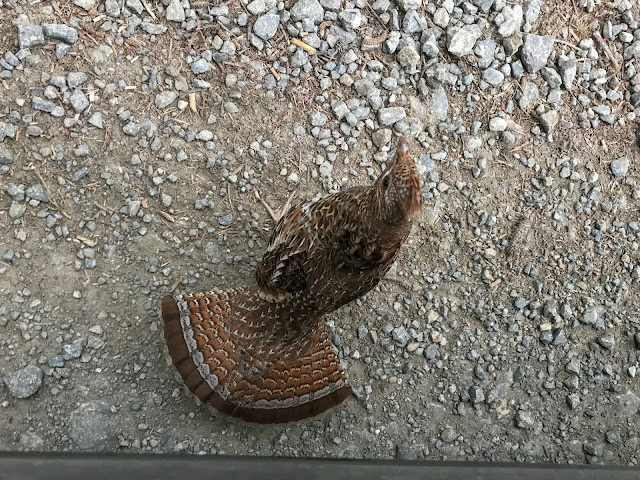 After that show I decided to get out of the truck and and see what he did.  Well, he followed me around, charging at my ankles.  Not helpful for photos.  After I imitated his charging a few times he kept his distance and I managed a few photos of him out in the open. 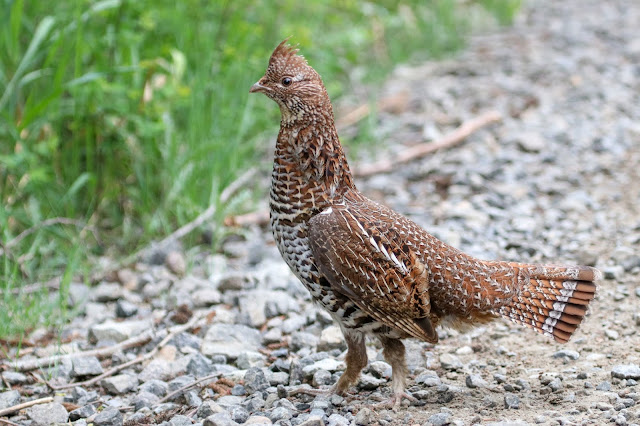 Soon after a truck came up the road and the grouse surprised us by taking off after it. 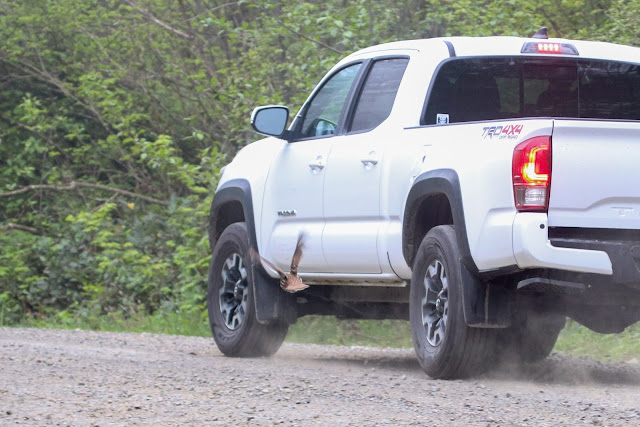 With my suitor gone, we continued on up the mountain with a few quick wildflower stops. 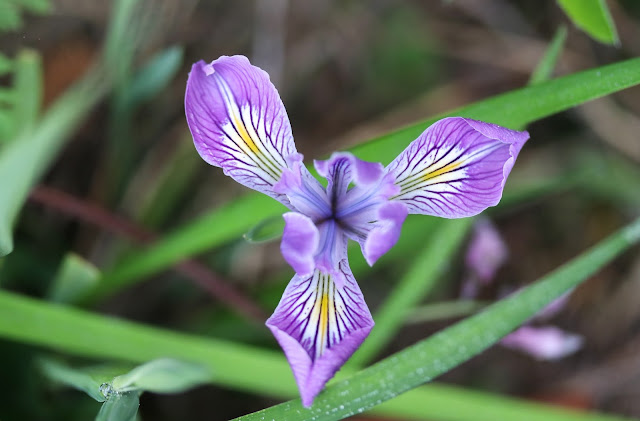 We followed L-1500 up past a gate that had been closed earlier in the season to a dead end at the new-looking Larch Mtn Trailhead.  There was a restroom, parking area, and entrance to the Trillium Trail, in addition to two roads where motor vehicles were not permitted. 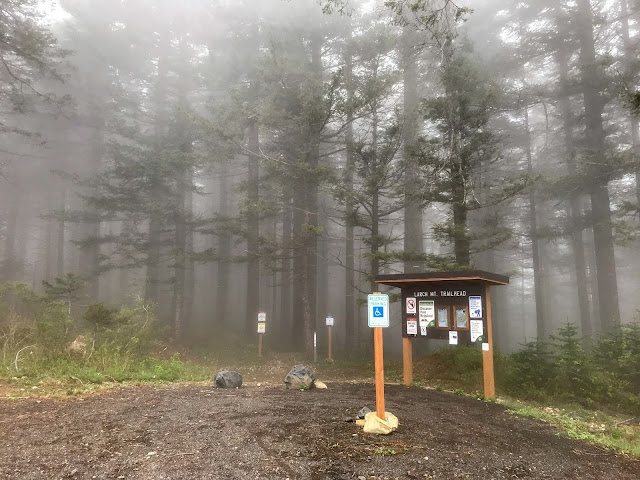 We immediately heard a Sooty Grouse booming, our second county grouse of the day, then started down the Trillium Trail, a mountain bike trail.  A fancy metal sign was hanging over the trail, which I only just noticed reads "Thrillium" rather than Trillium.  Clever. 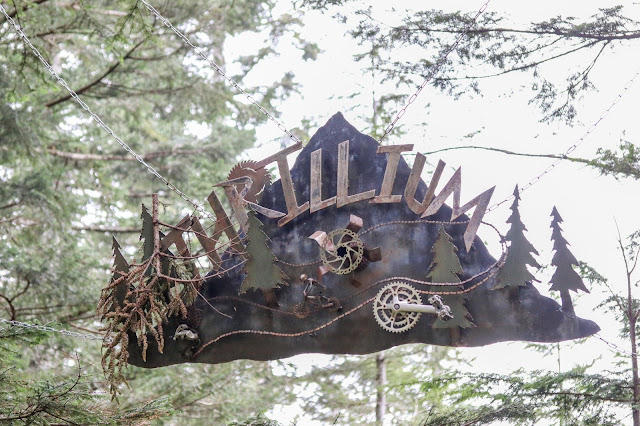 The ground was carpeted with fun plants like this Oregon wood sorrel: 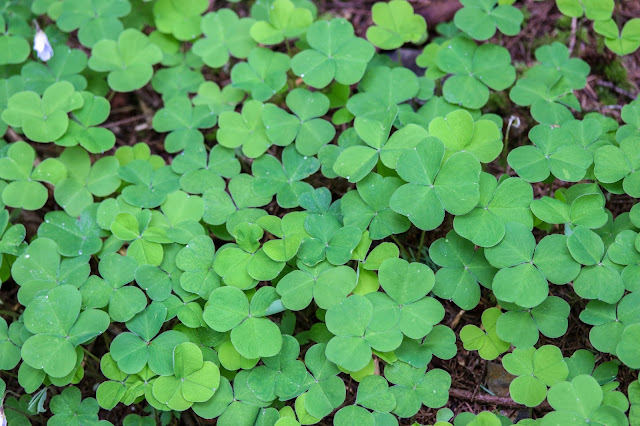 Red Crossbills flew overhead while a Pacific-slope Flycatcher called from somewhere unseen.  We turned around to head back to the parking area where more birds could be heard.  Finally I found a bird (sometimes that's a feat all on its own) perched on top of a young evergreen upslope that looked to be a finch.  We worked our way uphill and he popped out again. 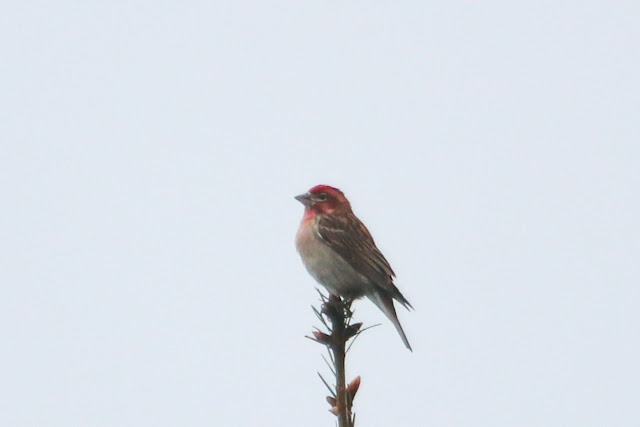 We had assumed it would be a Purple Finch but knew there was a slight chance of Cassin's, and indeed after consulting the Sibley app we decided this was a Cassin's!  A most excellent county bird! 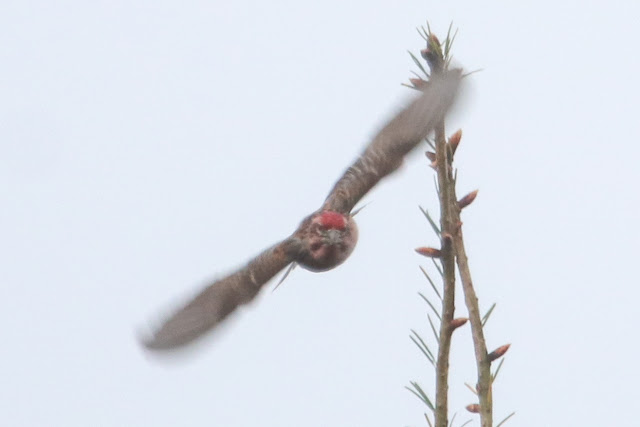 There was yet one more direction we could explore from this dead end, in the direction of singing warblers, so off we went.  A flock (!) of Red-breasted Nuthatches was entertaining, and finally we had good looks at a Hermit Warbler.  Down on the ground the western trillium was looking great. 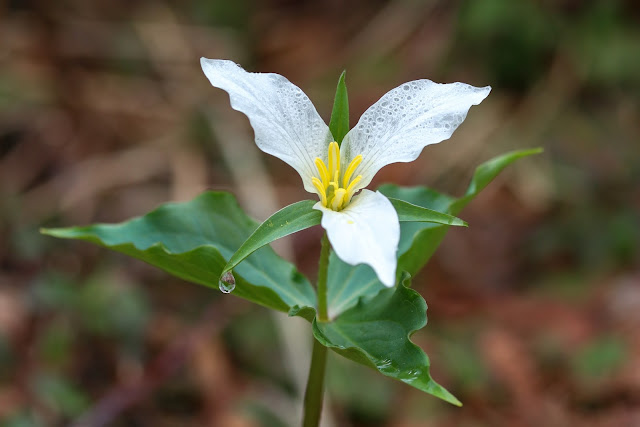 Band-tailed Pigeons made a couple of appearances in this area, though only this one landed: 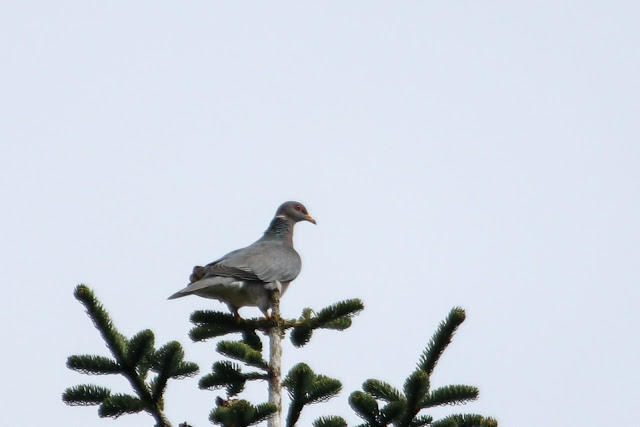 The rocky road led us up and past an old clearcut to an even rockier talus slope where we started to hear pikas.  Lots of pikas!  We slowly moved closer till Jacob found one perched out in the open, waiting to be crushed. 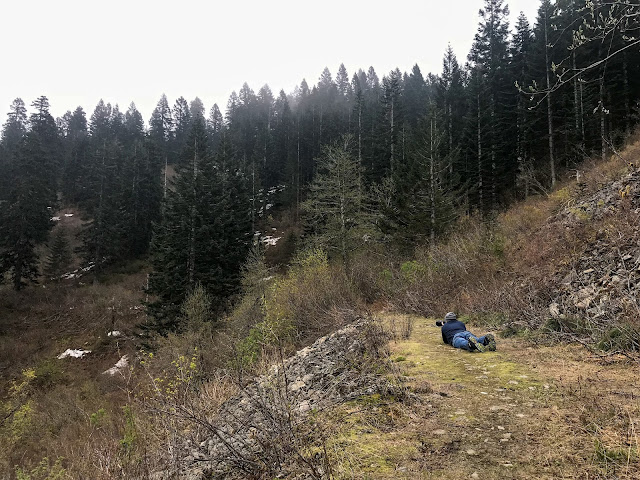 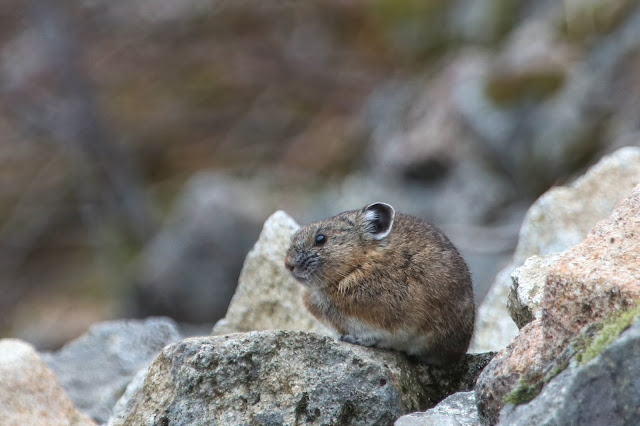 On the walk back Jacob noticed this insect that is probably an ichneumon wasp: 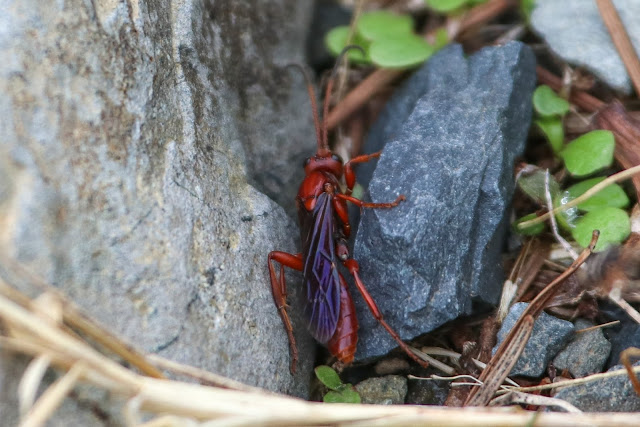 I recently read Bernd Heinrich's The Snoring Bird (which I really liked) where he writes a lot about his father's obsession with collecting ichneumons.  I've only seen a couple ever, but they are definitely cool-looking, worthy of obsession.

Back on the road I requested a stop for a small waterfall lined with these marsh marigolds: 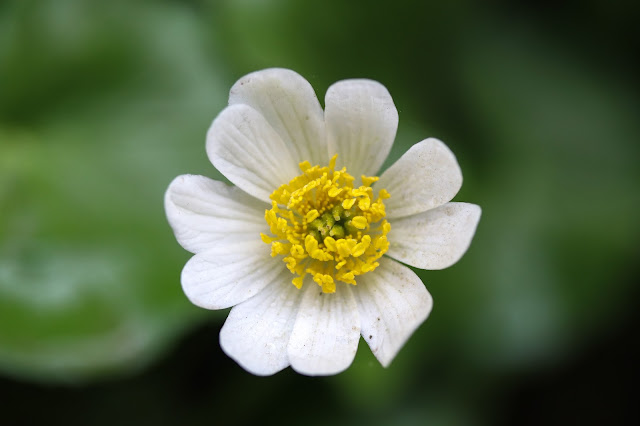 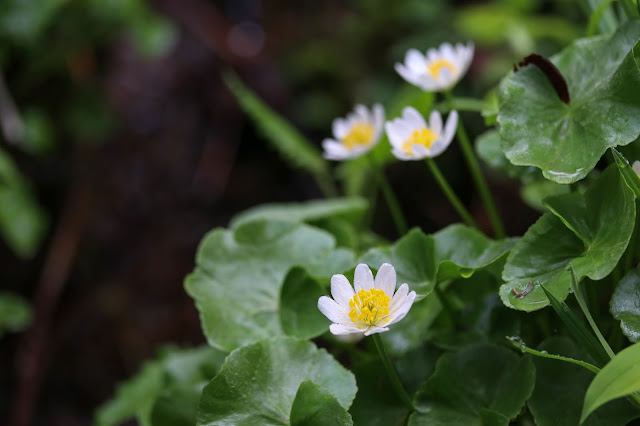 We made another stop for my first fawn lily of the year: 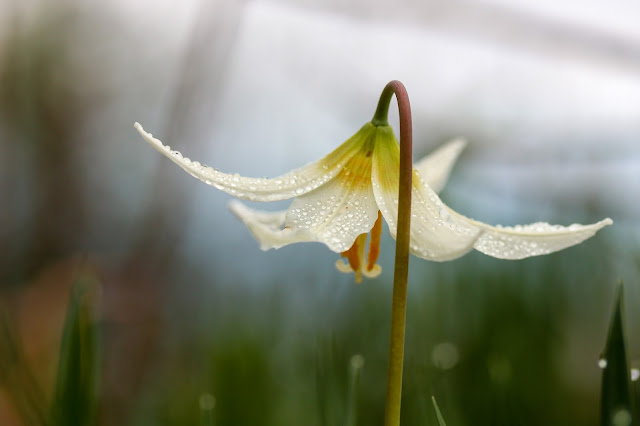 Then another stop for yet another group of flowers which I think are all Oregon anemones despite how different they look from each other.  Tell me if I'm wrong! 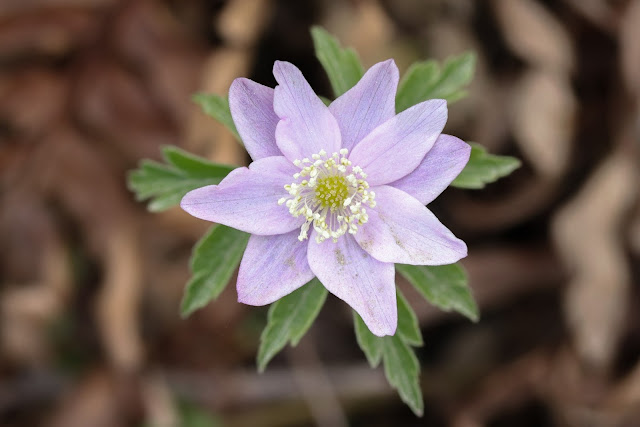 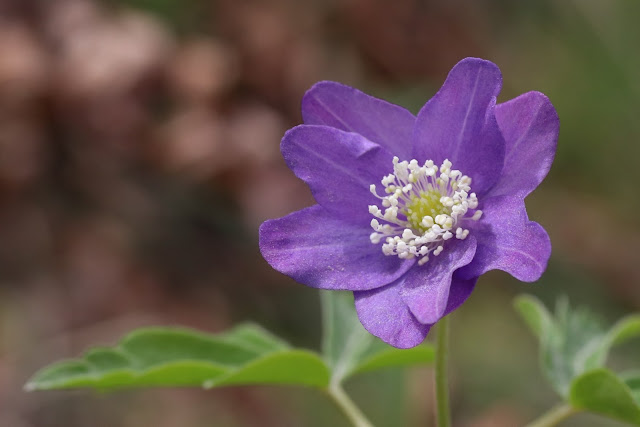 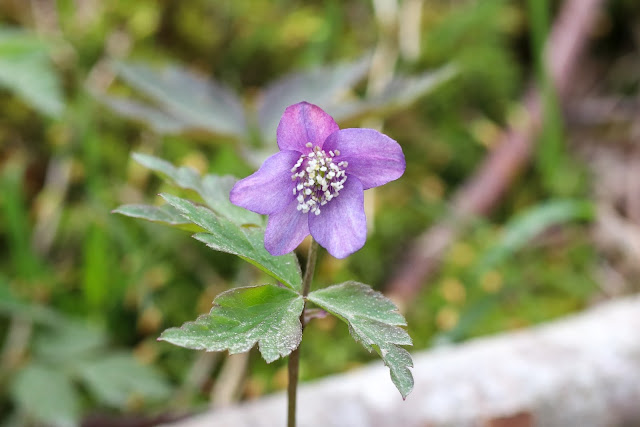 Our last stop was for a walk down an old logging spur where people haul out their old keyboards to shoot up.  Insert shrug emoji here. 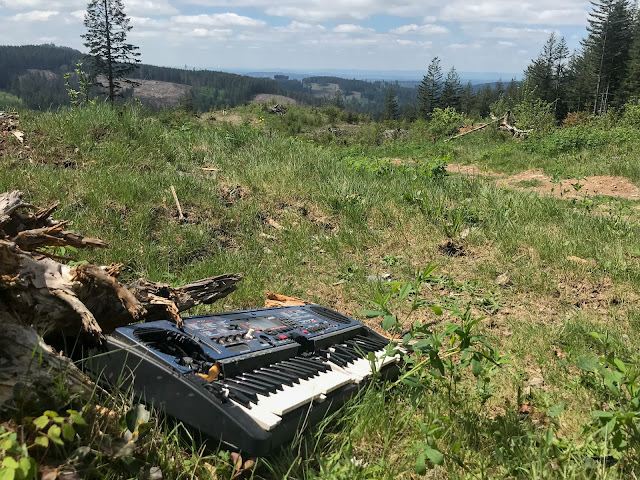 Jacob also pointed out this little butterfly that BugGuide identified for me as a Two-banded checkered skipper. 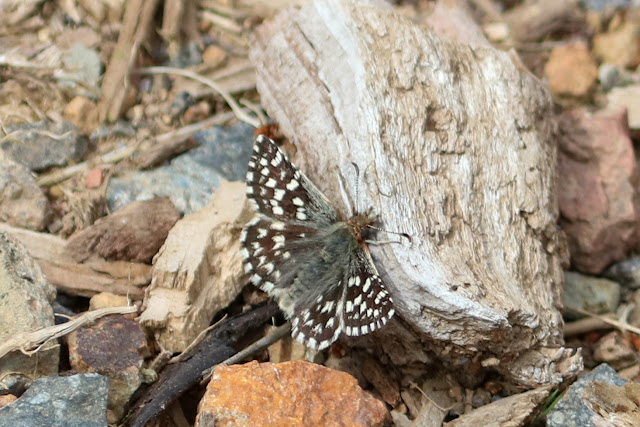 And that was about it from our day on the mountain.  We both picked up FOUR county birds, two of which I have never seen in Multnomah either.  Maybe our Larch Mountain is better?  Except with more shooting.  And possibly more clear-cutting, though that's a tough call.   Oh and definitely more sketchy anxiety-inducing cliff-skimming forest roads.