on August 23, 2018
Over the years since I began birding I have heard many a story about the mythical White-tailed Ptarmigan that are said to inhabit Mount Rainier National Park.  I believed the tales I heard of birders snowshoeing for days before finally finding the blinding white bird against the blinding white snow, of hikers spotting a rock-colored bird amid a field of rocks.  After this week I feel confident in saying that despite the grand stories I have heard and the eBird checklists I have read and the photos I have seen, the White-tailed Ptarmigan of Mount Rainier (WTPMR) are a myth.*

How could this happen, you ask?  Let me offer a few ideas.

1. Ptarmigan look-alikes could easily be built out of snow. 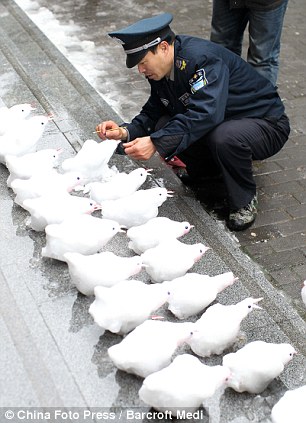 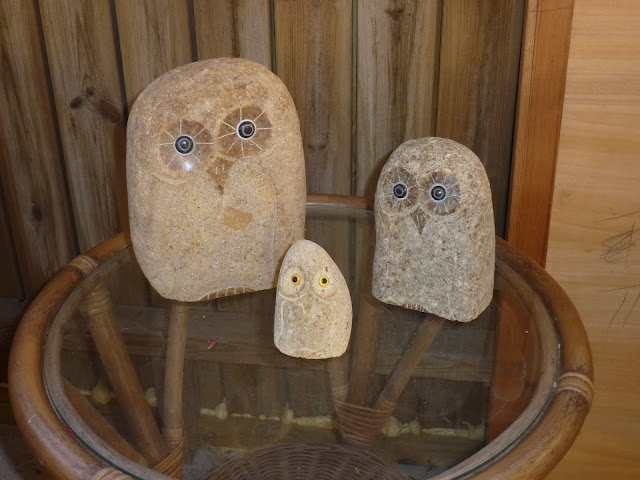 3. White-tailed Ptarmigan exist in other places and folks get their photos mixed up. 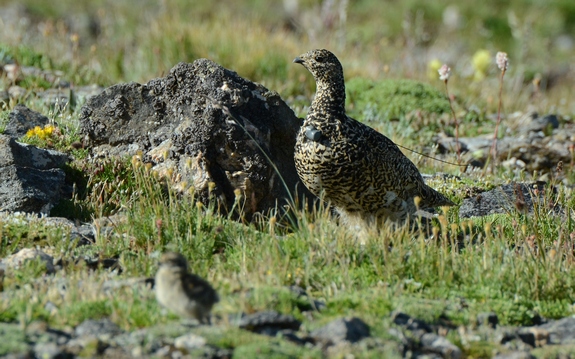 (Borrowed without permission from Steve's blog, ptarmigan in CO)

4. Birders want to believe in this myth, and so they do. 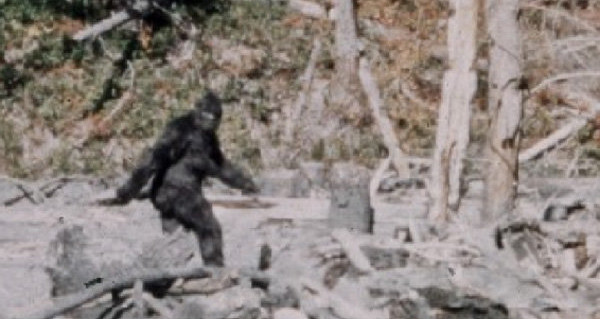 I get it.  I wanted to believe also.  But after this week, on my 8th (?!) attempt to find this alpine chicken I have finally accepted what I had long suspected:  WTPMR are not real.

Even with that fact cemented I will continue to go up to that mountain every year because it is awesome enough without the ptarm ptarm.   The scenery is always jaw-dropping, the wildlife is fantastic, and the wildflowers are dreamy.

For my 40th (!!) birthday this week Jacob and I woke up at 3:30 a.m. to get to the Sunrise parking area bright and early.  The plan was to hike a sort of loop up to the Second Burroughs where ptarmigan had been reported all weekend.  The air was campfire smoky to start, but thankfully it cleared up quite a bit after an hour or two. 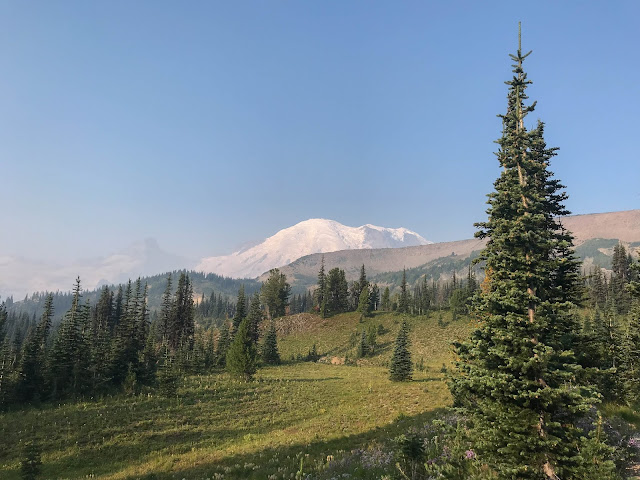 We started our hike along a gravel access road at the southwest corner of the parking lot and followed it up to Shadow Lake, then continued up to the Emmons Glacier Overlook.  A hoary marmot was lounging about on the stone wall of the lookout with its fur blowing in the breeze. 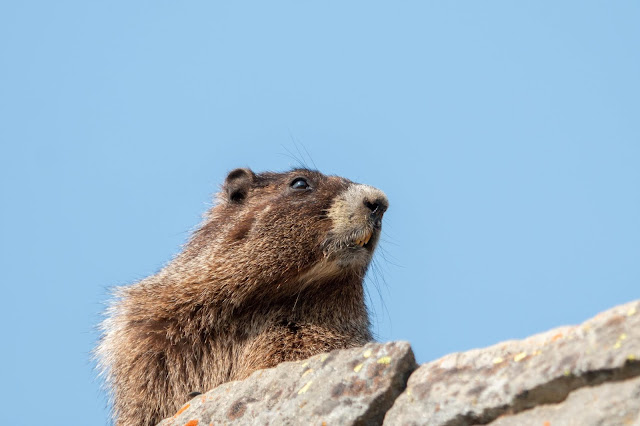 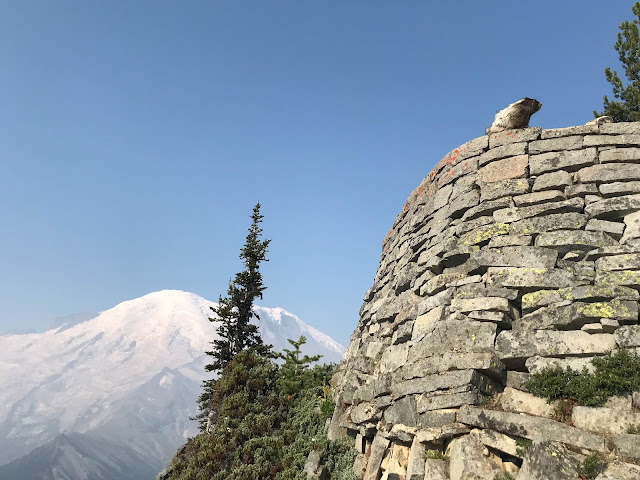 The views from this spot below the wall were amazing. 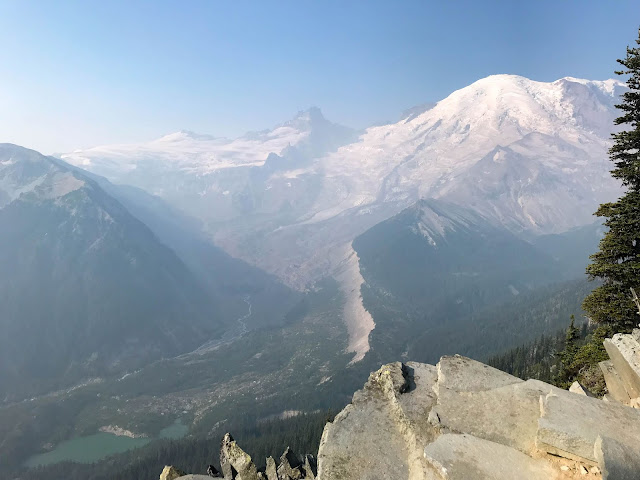 Also near the lookout were some chipmunks being adorable. 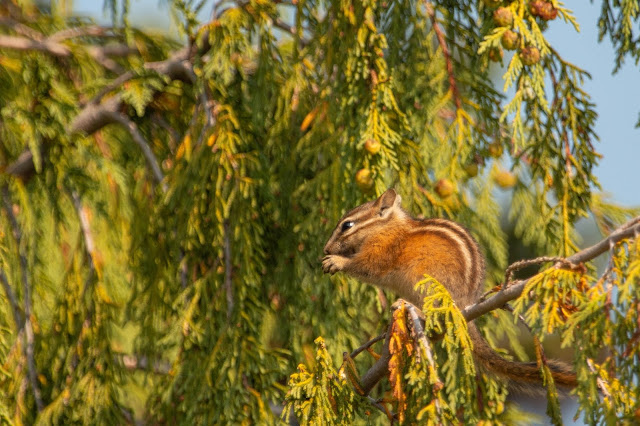 As we made our way up towards the first Burroughs, one of three peaks on Burroughs Mountain, we started to see birds. 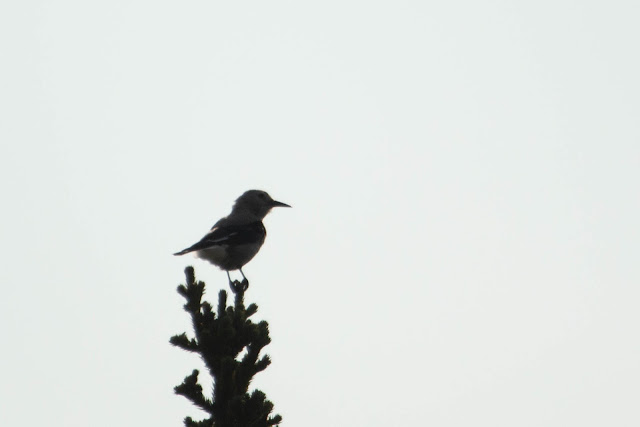 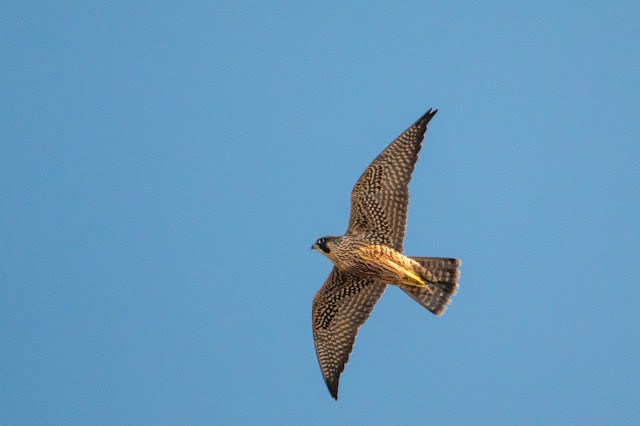 Somewhere between the first and second Burroughs we stopped to eat snacks while a raven watched.  Later the raven found its own snack that I still cannot identify. 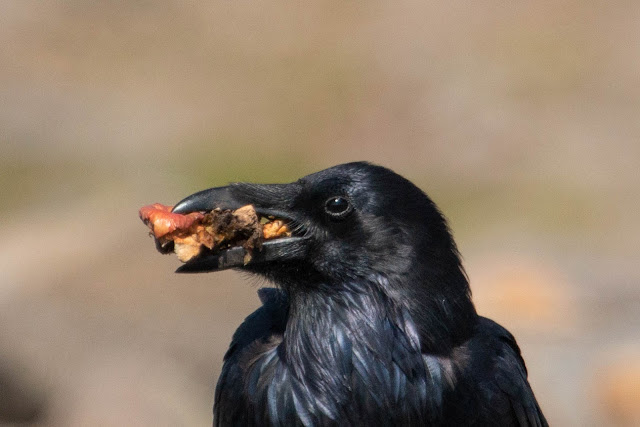 While we were sitting there a couple came hiking down from the other direction.  The woman stopped and pointed at something with her trekking pole:  a mountain goat!  We had not noticed it. 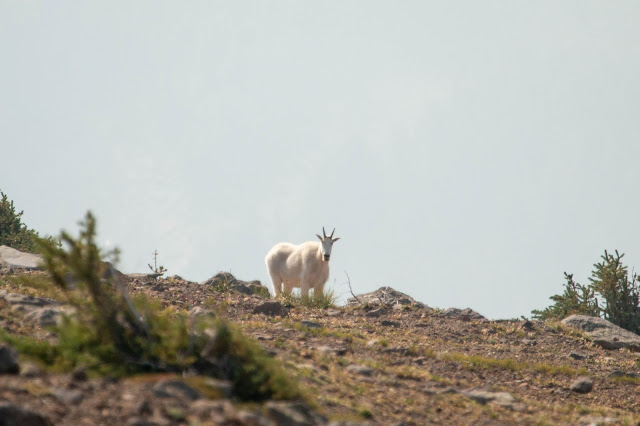 I asked the couple if they had seen any chicken-sized birds and they of course perpetuated the myth, even with their status as non-birders.

Back on the trail the habitat looked perfect for ptarmigan but we only found ptarmigan-shaped rocks.  And Horned Larks. 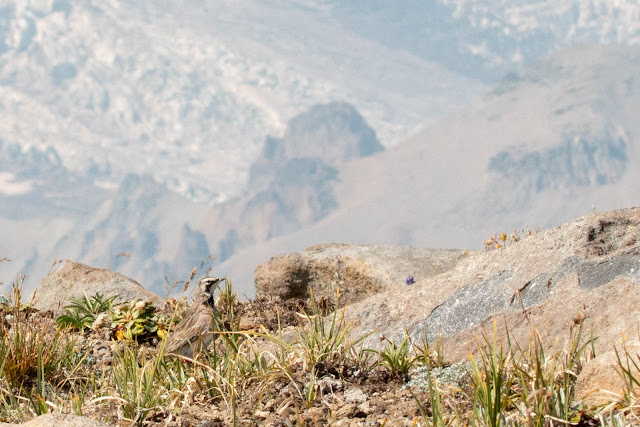 After viewing a likely goshawk way in the distance, we made it to the trail intersection where we would turn to hike up to the second Burroughs. 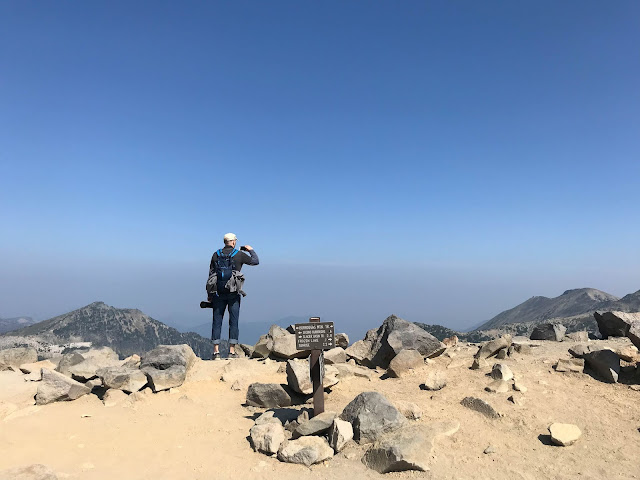 And the view of the trail ahead of us: 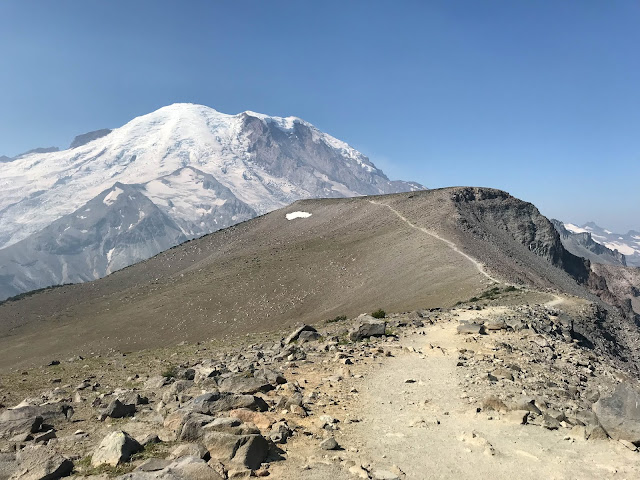 This must be the closest I have ever been to Rainier itself. 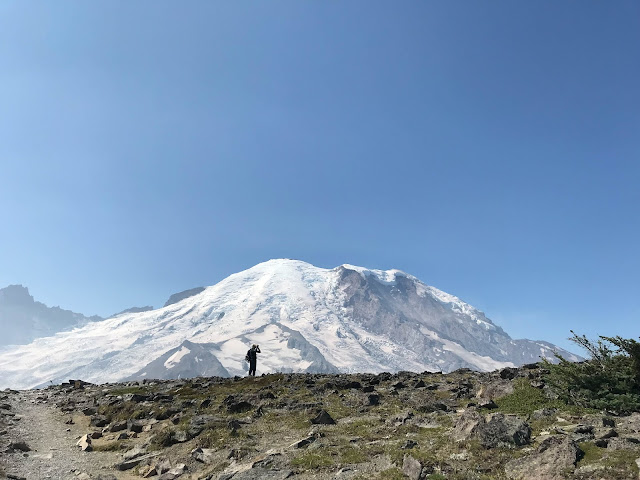 Again we found Horned Larks rather than ptarmigan.

A herd of mountain goats was lounging in the valley between Burroughs and the Fremont Lookout. 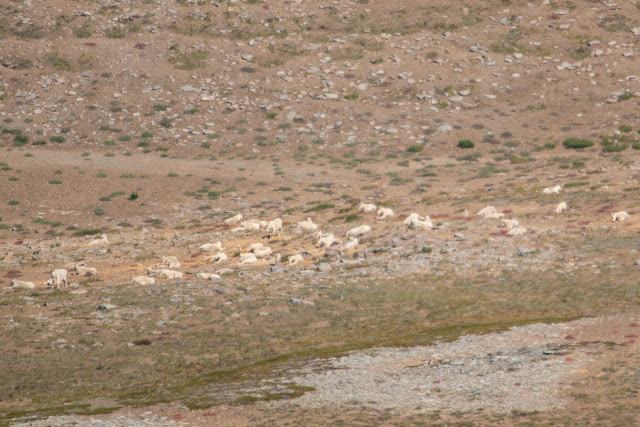 Along the trail that would lead us back down Burroughs towards Frozen Lake we had more Horned Larks including a youngster still being fed by an adult.  As we were watching the larks Jacob noticed a bird at the feet of a woman that had stopped near us, a Gray-crowned Rosy-Finch! 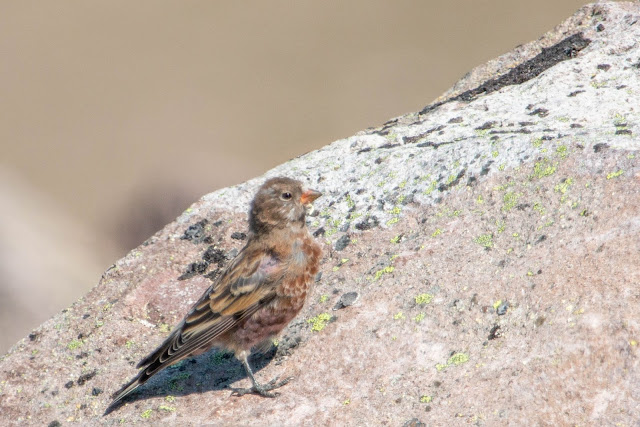 Across the valley we saw a little goat family grazing away from the herd. 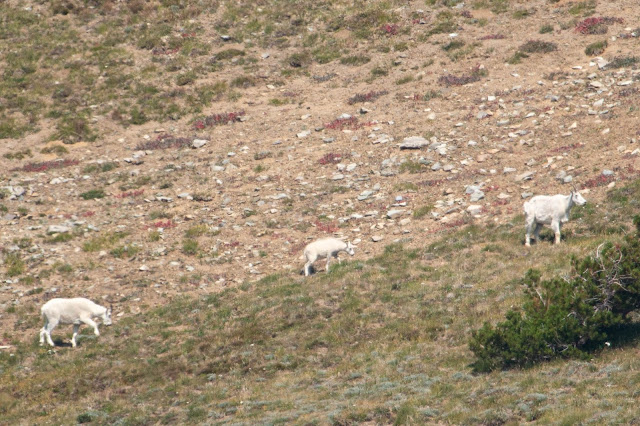 We followed the trail back past Frozen Lake to a view of the trail we had taken up the mountain.  Shadow Lake can be seen on the left and the Emmons Glacier Overlook is somewhere in there also. 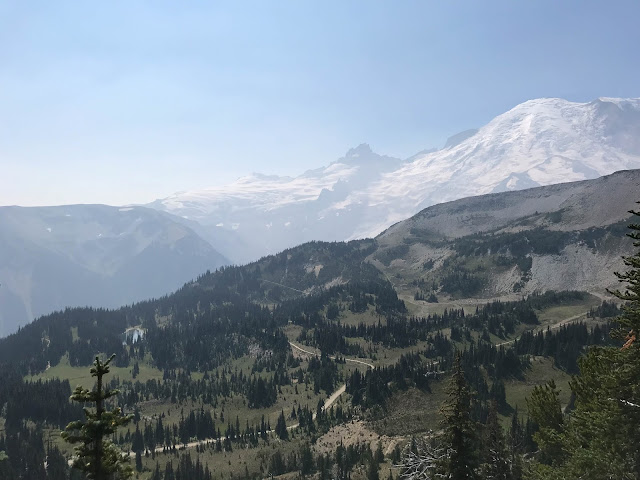 At one point I had stopped to wait for a couple to pass us.  They didn't get far before they also stopped and the woman said she had just seen a black bear run across the trail ahead.  Ooh!  We proceeded slowly and scanned down slope of the trail for a minute before Jacob spotted the young black bear at a pleasantly safe-seeming distance. 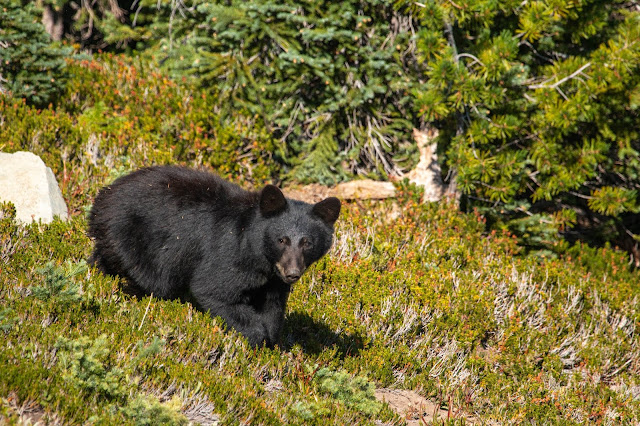 Unfortunately since it's Rainier it didn't take long for a giant pileup of humans to congregate, including one young girl who was absolutely terrified.  We only stuck around for a couple more minutes because of this. 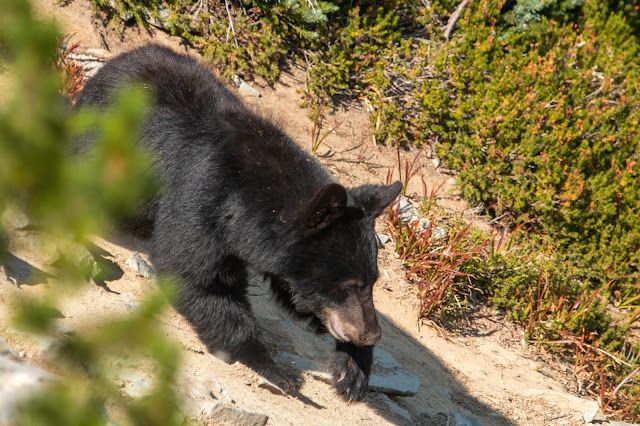 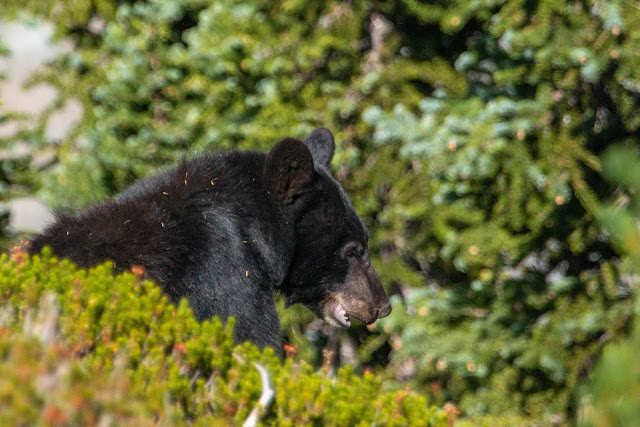 Hell yeah!  It had been a few years since I'd seen a bear so this was awesome.  Birthday bear for the win.

We made our way back down the trail to the parking area where the temperature had heated up to the 70's, and I finally felt the need to take my hoodie off.  Back in Portland it was in the 90's, so we had really made a good choice in heading up there!  A most excellent birthday on the mountain!!


*Some people still believe that White-tailed Ptarmigan exist on Rainier.  They may attack this post with harsh words but do not fall for their lies.  Ptarmigan-laden eBird reports from Rainier are the real fake news.