on November 08, 2018
It's been almost a year since I first visited the section of the Burnt Bridge Creek Trail that is called Meadowbrook Marsh Park.  I was still mourning the loss of my old 5MR patch, Blue Lake, but was excited to find this area with ponds, marshes, native shrubs, trees, and the creek.  It smelled like potential.  I immediately suggested it as an eBird hotspot and now I've seen 96 species there.  Four to go till the hotspot changes from blue to green!

Time to catch up on my patch visits from the last month or so. 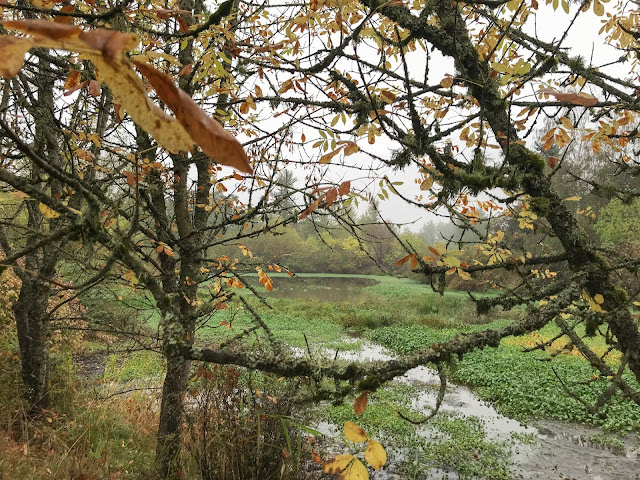 Jacob and I visited the spot in early October on a foggy and misty morning.  Most migrants had departed by then, and ducks and sparrows were showing up. 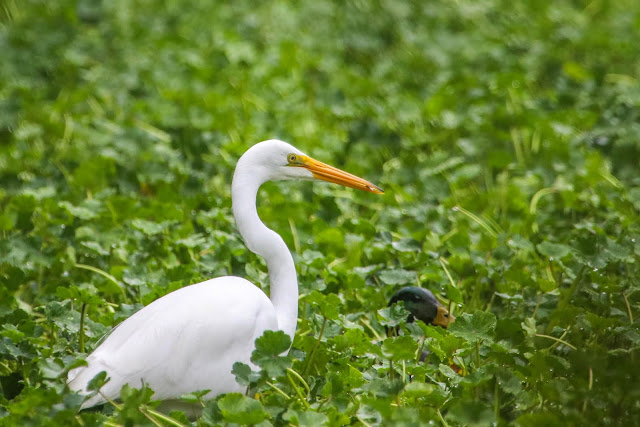 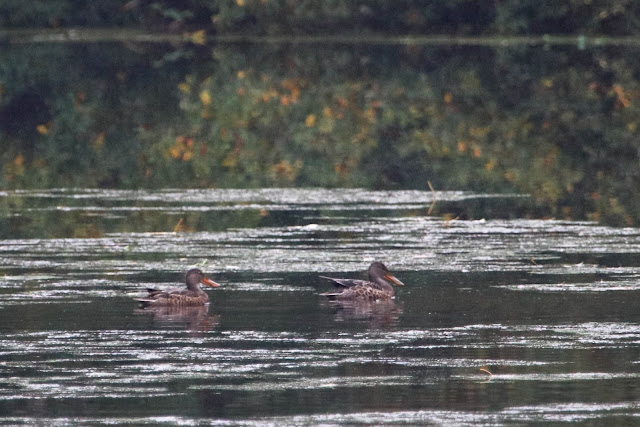 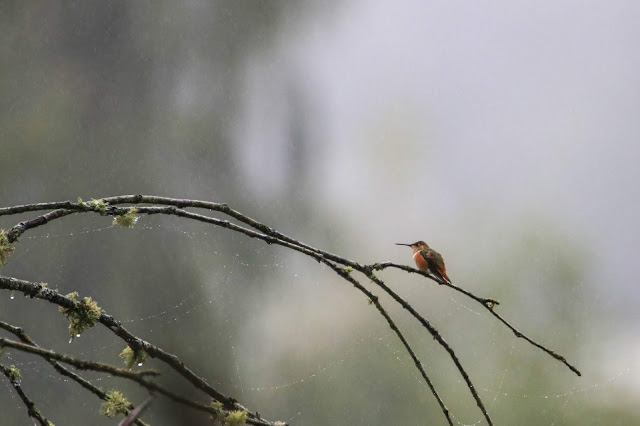 Getting late for Rufous Hummingbirds


The biggest surprise for me that morning was these mushrooms, which look like amanita muscaria: 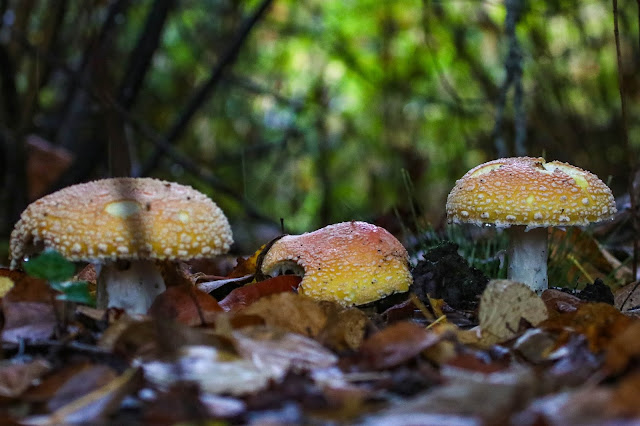 I had never seen them away from the coast before.  So cool!

The following week I visited on a sunny morning filled with sparrows and fall colors. 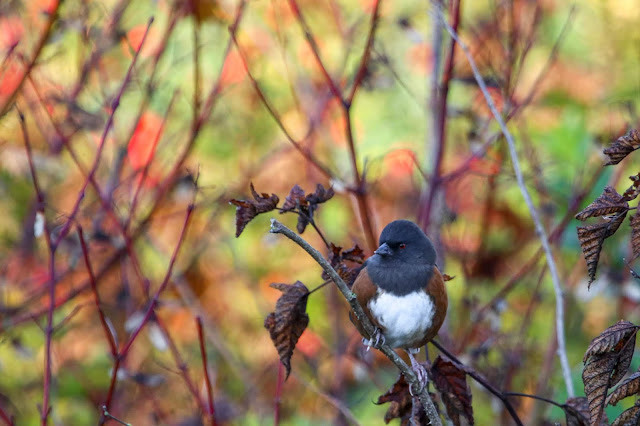 The real highlight that day was a Sharp-shinned Hawk.  For some reason it had decided to hang out in the middle of some active Steller's Jay, California Scrub-Jays, and flickers.  The birds would ignore it and go about eating things but the hawk kept randomly dive-bombing different birds.  The birds would get mad and harass it for a bit, then go back to eating. 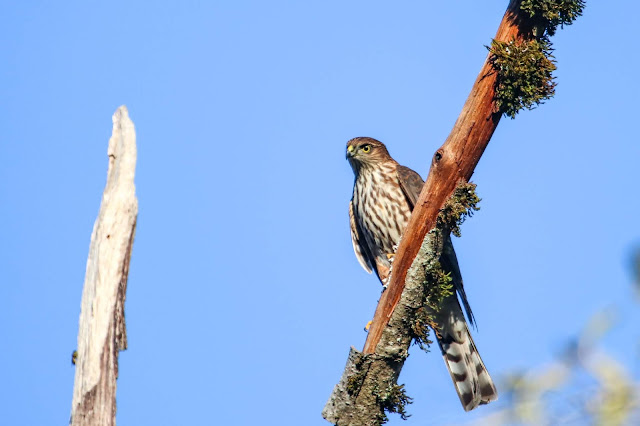 A couple times one of the Steller's Jay made a spot-on Red-tailed Hawk call. 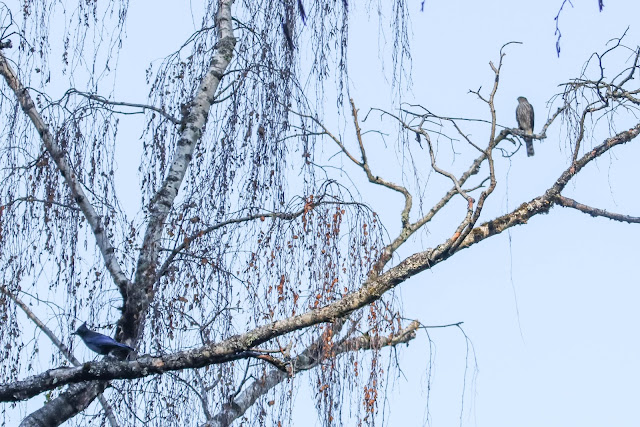 Jay on left, hawk on right 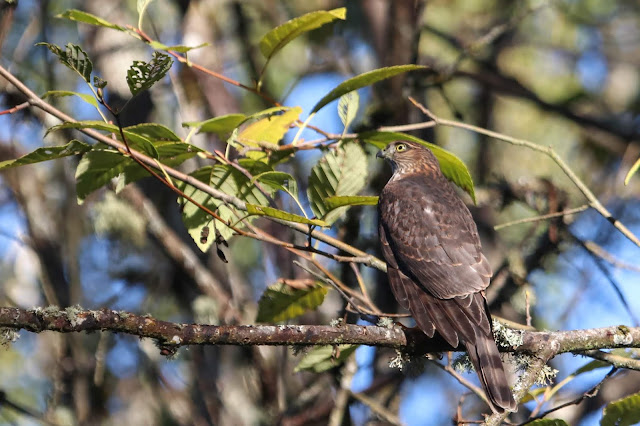 After chasing a Steller's Jay for the millionth time.

In late October I went for a walk there in the morning fog.  A Green-winged Teal among the Mallards was nice to see. 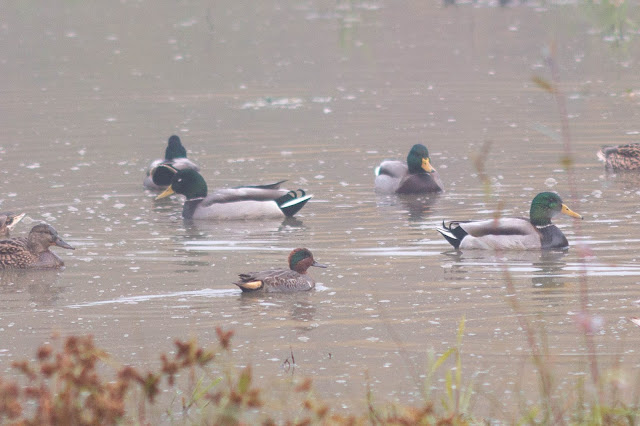 There's a somewhat sketchy trail that leads along the side of the pond and I usually don't go back there because I'm afraid I'll find a homeless camp.  On this day I decided to go a little farther to look for potential camera trap spots, then heard a bunch of jays and crows freaking out.  Even the Mallards started getting into it.  Was the sharpie back?  Was it something...better?

I followed the trail, slightly freaked out, but more curious than anything.  Finally I started seeing the jays and crows and eventually after a lot of scanning I found it! 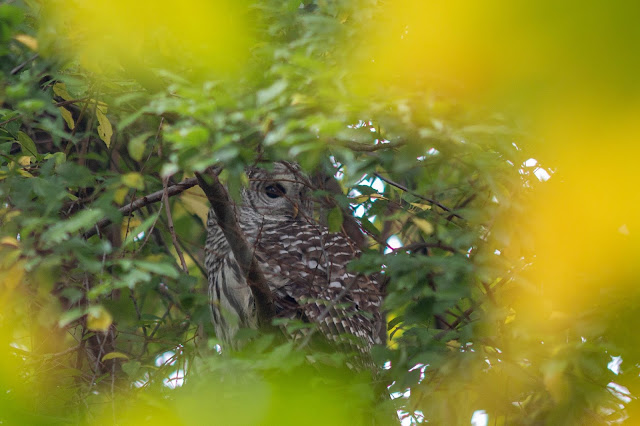 Holy crap!!  It was a Barred Owl!  Not only a patch bird, a 5MR bird, a county bird, but also a STATE BIRD.  I could not believe my luck.  As I watched it sit there the jays and crows slowly took off, the Mallards calmed down, and it was just me and the owl.  I texted Jacob and we made plans to return in the afternoon with his son, Matthew, to see if it was still there.

By then the sun had come out and everything felt a bit less spooky.  We walked back into the sketchy area and I pointed out where the owl had been that morning.  It wasn't there.  We looked around and Matthew pointed, "there's the owl."  It was out in the open now, totally chill. 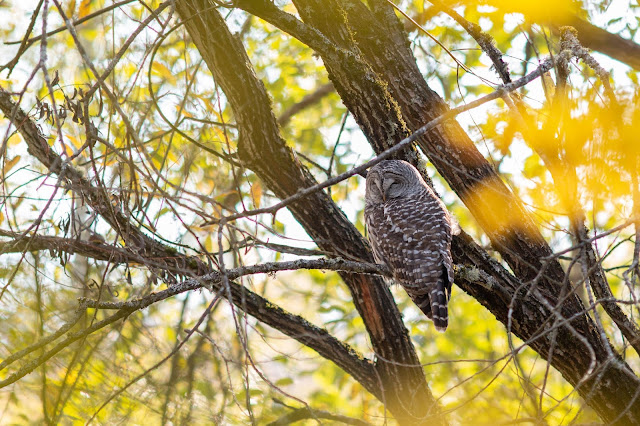 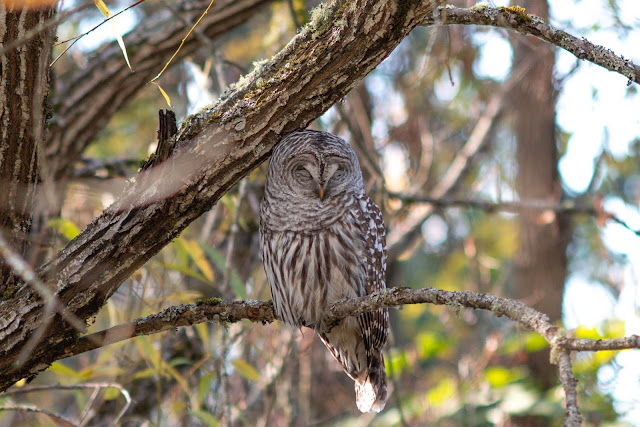 We were able to watch it for a long time as it snoozed, lounged, and occasionally looked down at the ground.  Hopefully it was a memorable experience for Matthew.

This week I visited my patch again, starting with the eastern pond.  I noticed a storm wigeon out on the water and as I tried to get closer I flushed a Wilson's Snipe. 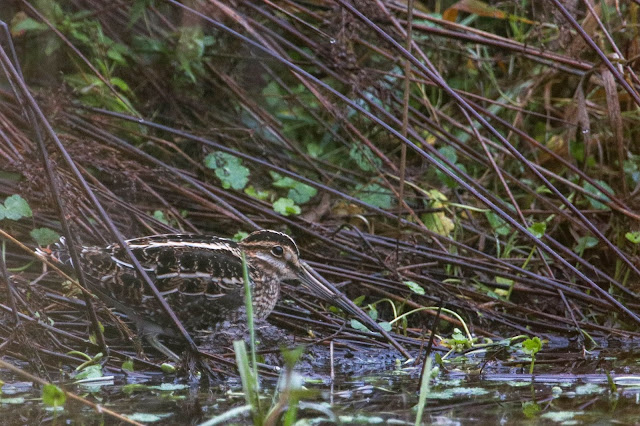 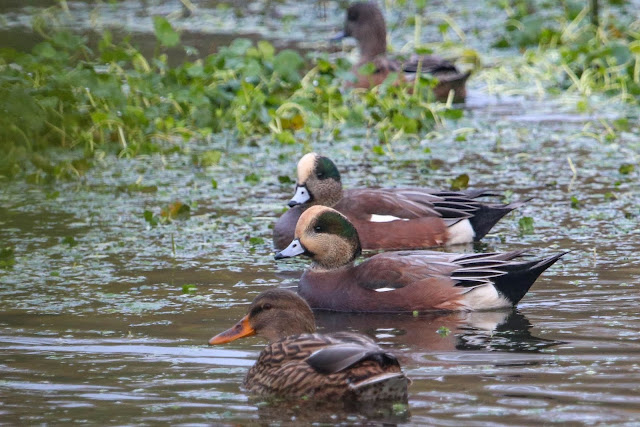 I walked the main path down to the side trail which usually has no other people on it, yet is close enough to the main trail to not feel sketchy.  It's often better for sparrows and thrushes.  My first of fall White-throated Sparrows were there, feeding on red osier dogwood berries. 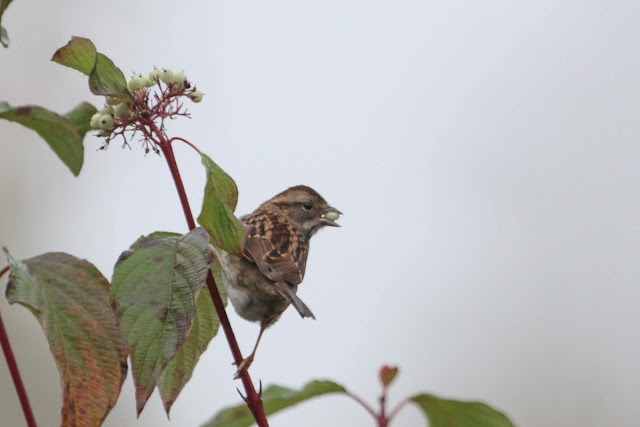 Native shrubs for the win!

Farther down the trail where things open up is prime sparrow real estate.  They love it.  I started seeing Fox Sparrows, juncos, tons of Song and Golden-crowned Sparrows, and towhees.  Then I heard a chip note, an incessant and loud chip note.  That's something, I thought.  Finally I located a bird that looked like a Swamp Sparrow but I couldn't tell for sure.  It stayed mostly hidden for several minutes then suddenly popped out in the open. 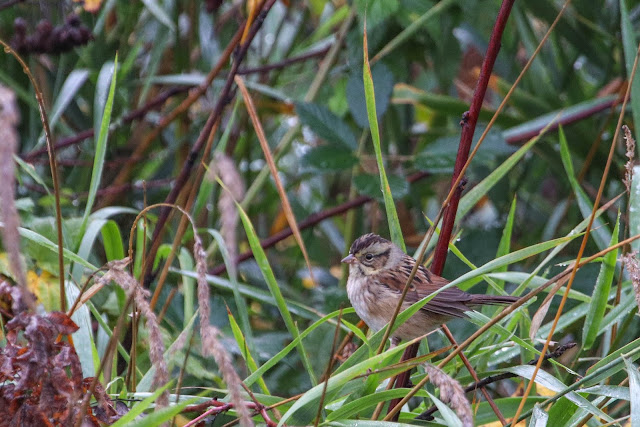 Indeed a Swamp Sparrow!!  This is a very good bird, never before eBirded within my 5-mile radius.  This is a bird that shows up at Ridgefield and Steigerwald, not along creeks close to my house.  Patch birding rules!