Spring comes to the 5MR

on March 31, 2019
It's here!  It's here!  It's all starting to happen!  Flowers are blooming, mason bees are hatching, and the birds are getting frisky.  In my last 5MR post I showed you a couple of nests at Marine Park on the Columbia River.  Well, that spot is blowing up with nesting birds, it's amazing.  I'll start with the Great Horneds: 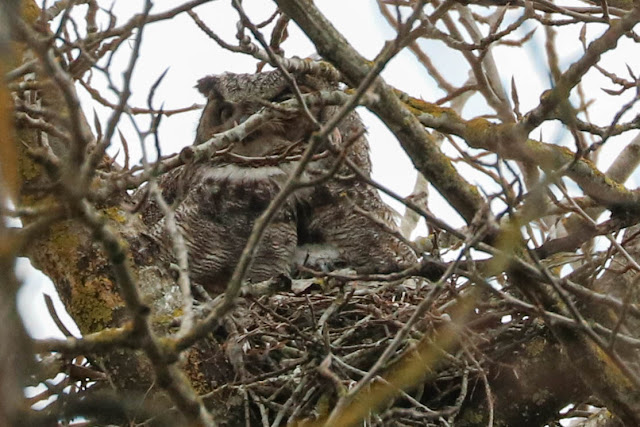 They had a baby! 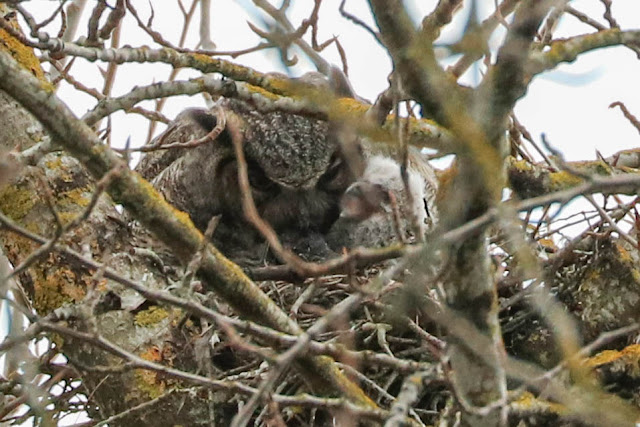 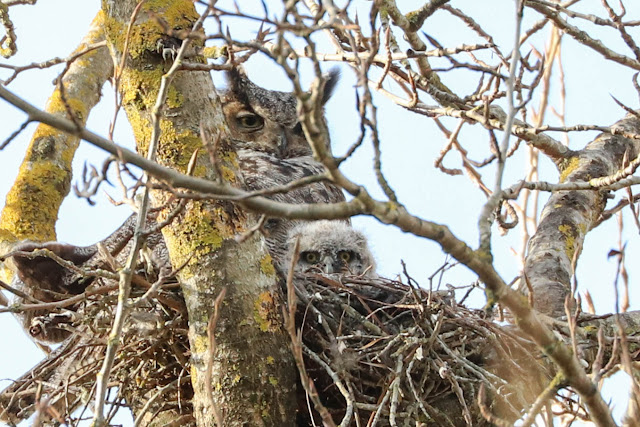 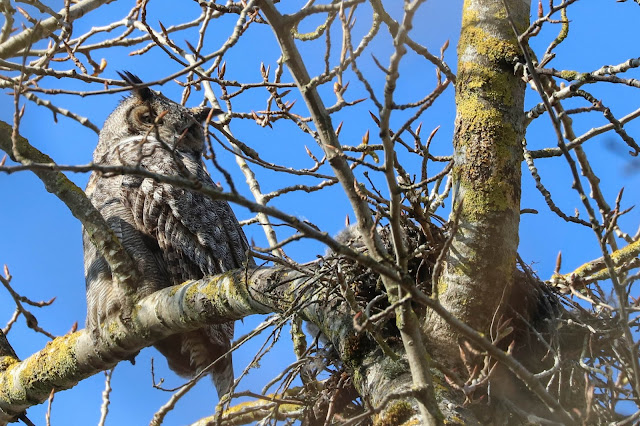 3.30.19  Youngster concealed by the nest but definitely moving around

So that's cool.  Down the bike path from the owl nest I followed one of the dirt trails into the trees where I noticed a hummingbird flying around.  Since it seemed like everyone I knew was finding hummer nests I followed the bird till she settled down... on a nest.  YESSSSSS!! 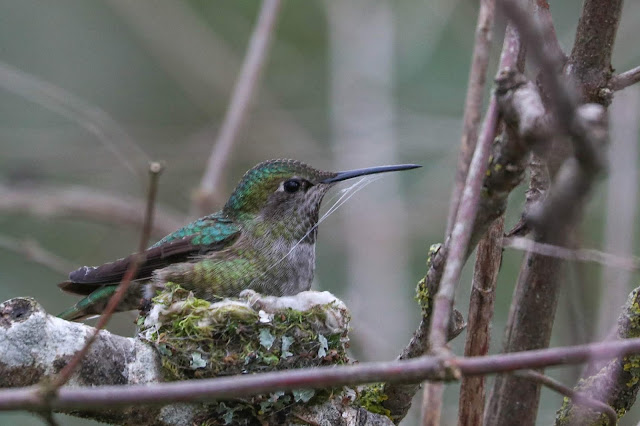 It was still under construction and I watched her add spiderweb to the nest lining.  So cute and smart too.  A week later she seemed to be sitting on eggs but I wasn't sure. 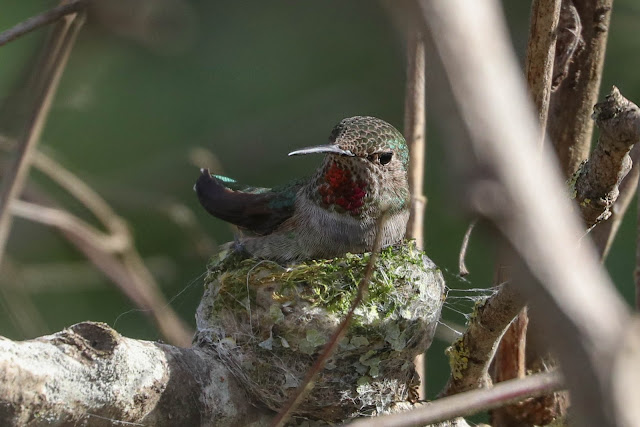 Yesterday Jacob and I went by and checked and she wasn't on the nest.  We waited to see if she would show up and after awhile we feared she abandoned the nest.  It is ridiculously low and very close to the trail so it wouldn't be too surprising really.   I reached over with my phone and took a quick pic of the inside of the nest... 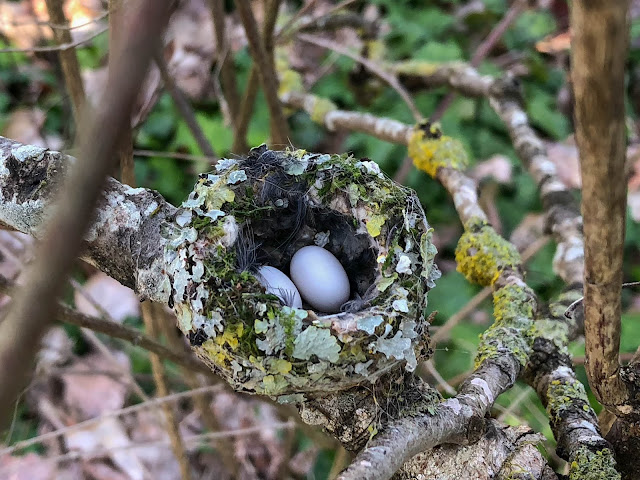 Oh!!!  Eggs!  We backed away fast and after waiting for awhile longer she returned and plopped down on the nest.  Phew!  Check out how many more lichens she has added to the nest too.  So lovely.

Last weekend we took Jacob's kids to the park to show them the owl and hummingbird nests.  We walked farther down the bike path and Jacob somehow noticed a tiny Lesser Goldfinch nest tucked into some Oregon grape. 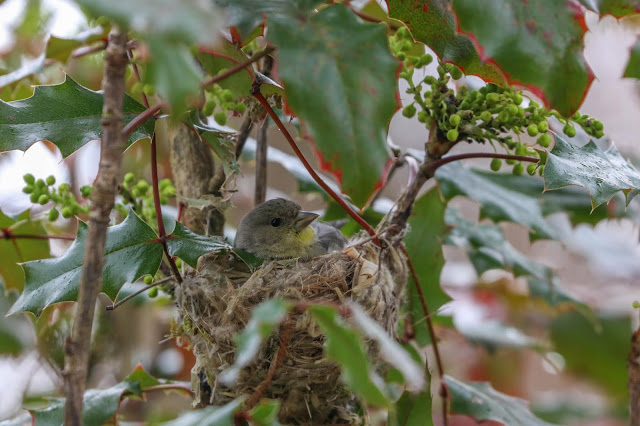 We checked on it again yesterday but not much change. 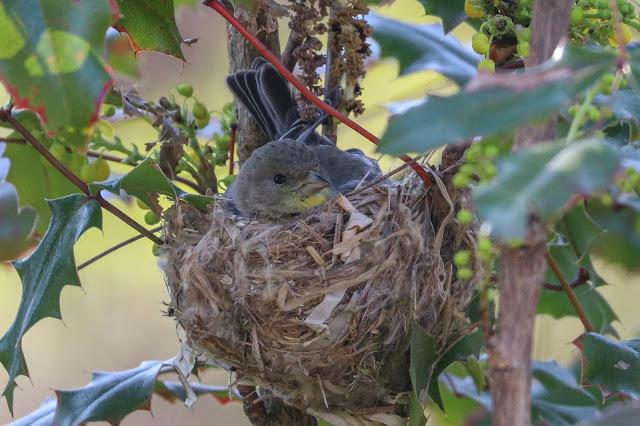 On our visit last weekend I noticed House Finches collecting nesting material and found them building a nest in some thick ivy.  They flew in and out a bunch of times but their actual nest is not visible. 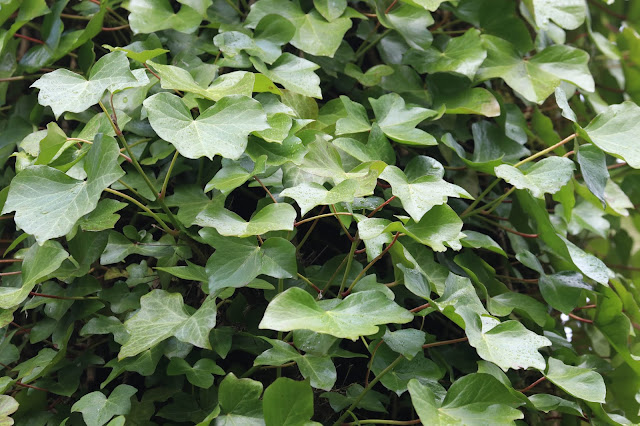 The fifth nest in this bike path stretch is the Red-tailed Hawk nest I showed you last time.  We caught the pair copulating yesterday but no photos.   There's a sixth nest too, an Osprey nest that has a couple of Canada Geese taking over.  Not bad for less than a mile of bike path!

And a few more things from Marine Park: 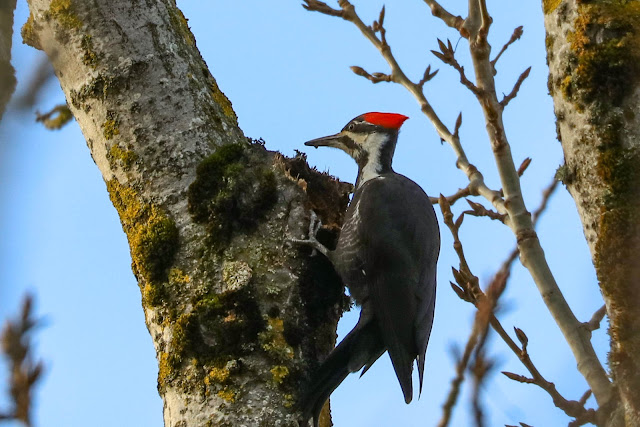 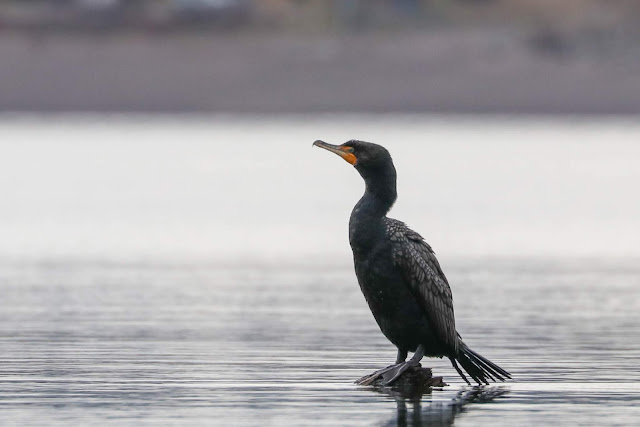 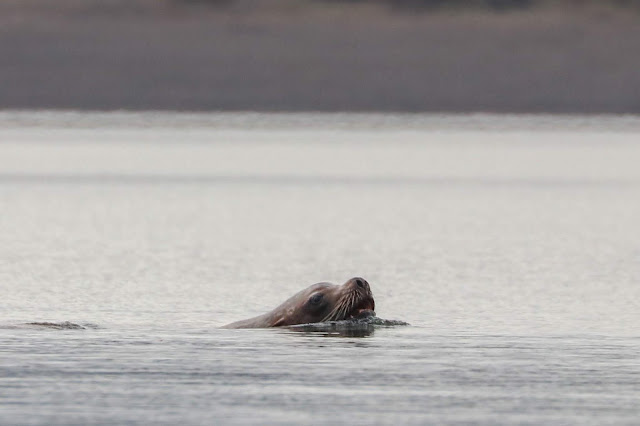 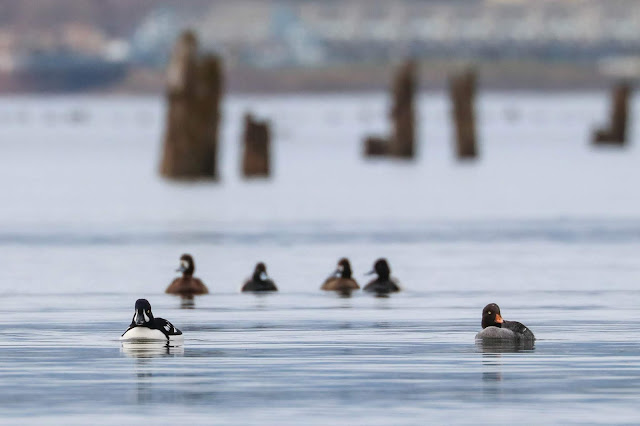 March can be an excellent time for spotting migrants that should be on the east side of the Cascades, not the west side.  I had some early success with the Say's Phoebes I shared in my last 5MR post but I wanted more.  With March being extra snowy on the east side even more birds have been showing up on the west side, including incredible numbers of Sagebrush Sparrows.  My friend Colby found one in Troutdale which I could not resist going to see. 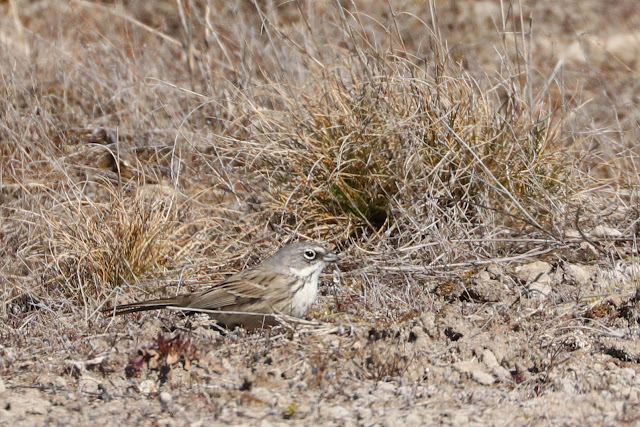 This was not in my 5MR, but the bonus sightings of some of my favorite Multnomah birders, Colby, Audrey, Andy, and Em, made it more than worthwhile.

I had high hopes for my weird patch, Burnt Bridge Creek at NE 147th since the habitat seemed great for migrants.  On my first attempt I had a Peregrine fly in close as I was parking.  Sweet! 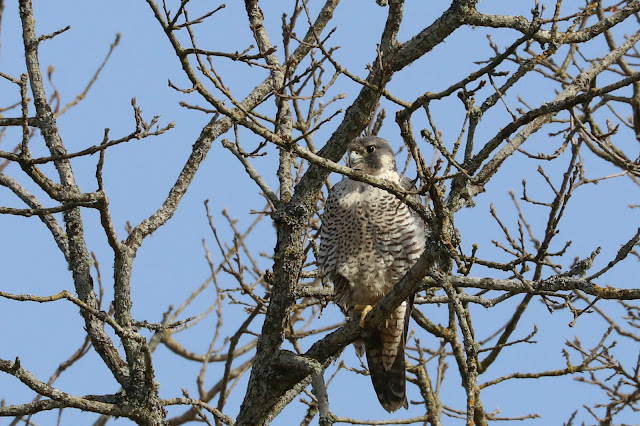 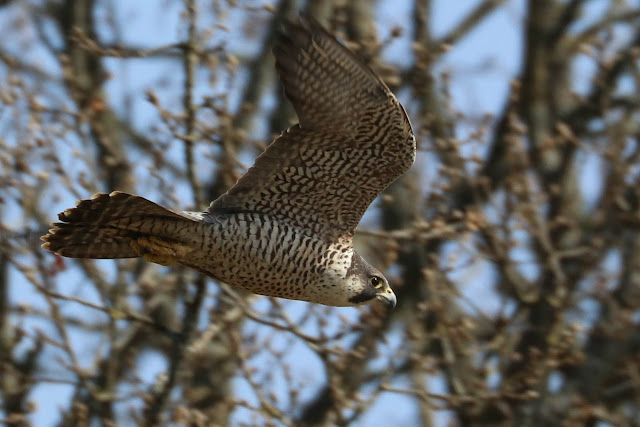 I had a fun visit that day but no eastside migrants.  I tried again this week and was not finding much during the first half of my walk.  Frustration was kicking in and I was questioning if I even understood what a bird might want in a habitat.  Then I saw a bird fly up into a tree. 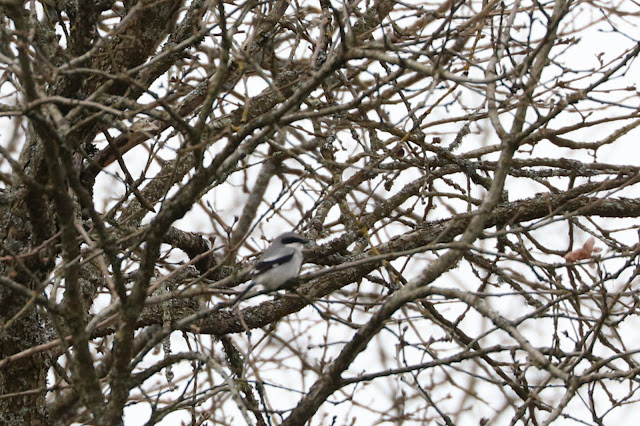 What!!!!  Loggerhead Shrike!!  This was the bird I had been hoping for as they had been showing up in good numbers in other areas.  It flew down to some blackberries and continued to hunt. 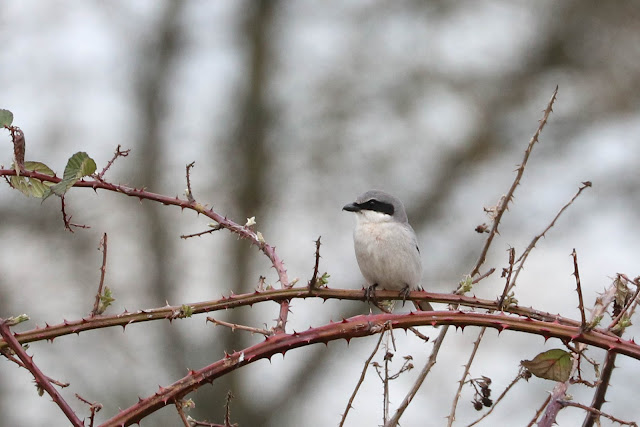 I lost track of the bird so moved on down the road where I found a Say's Phoebe!  Another good bird, and one that I had been hoping for at this spot since I started birding it. 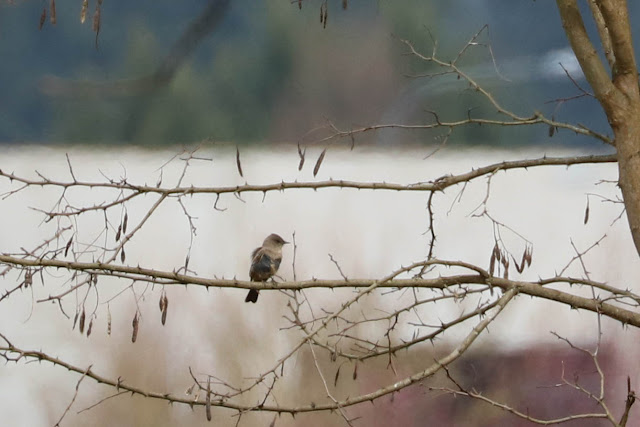 That's a walmart in the background

Jacob came to meet me and we were able to re-find both birds fairly easily. 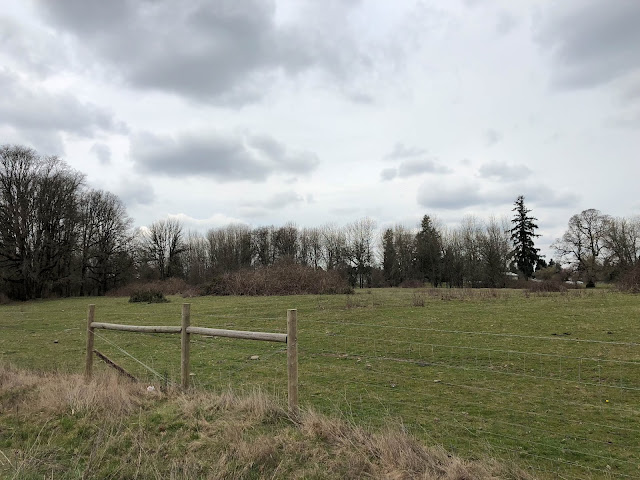 As we were leaving my friend (whose 5MR overlaps here) showed up to look for the shrike which we assumed she would find easily.  I was super bummed to find out later that she dipped and am still kicking myself for not sticking around to help.  Lesson learned!  Now enjoy this cow weiner: 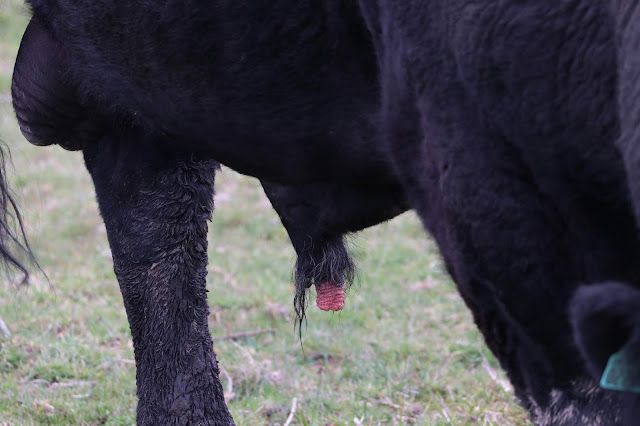 The 5MR challenge this month was to make your 5MR better.  I opted for a cleanup of a former campsite at Jacob's patch where I filled two garbage bags and hauled out a bunch of foam and other large items. 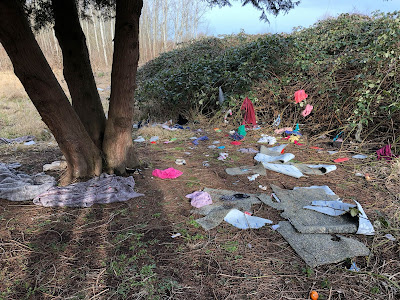 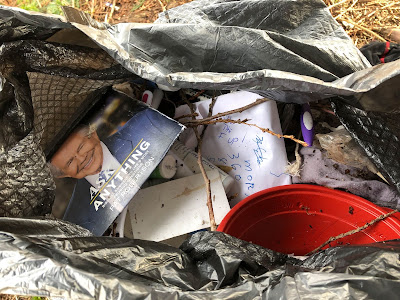 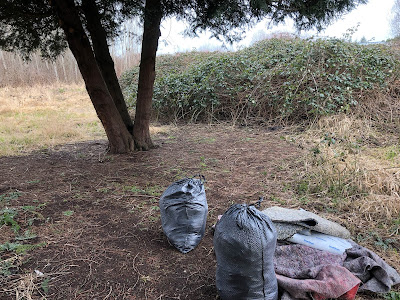 One last spot I have been birding is the Columbia Springs Fish Hatchery.  Surprisingly it needed complete checklists for all of March so I visited a bunch.  This week I didn't find any unusual birds but the standard ones are satisfying. 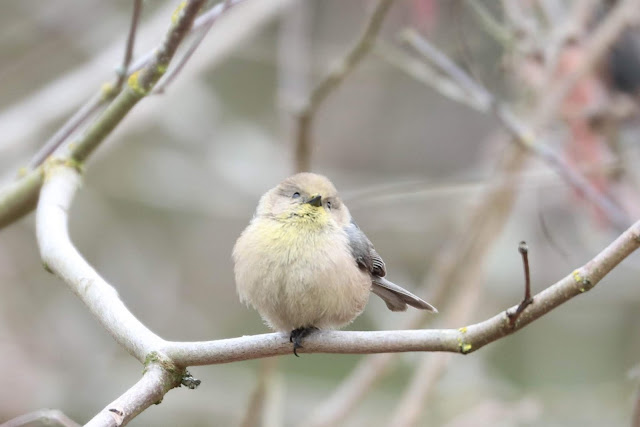 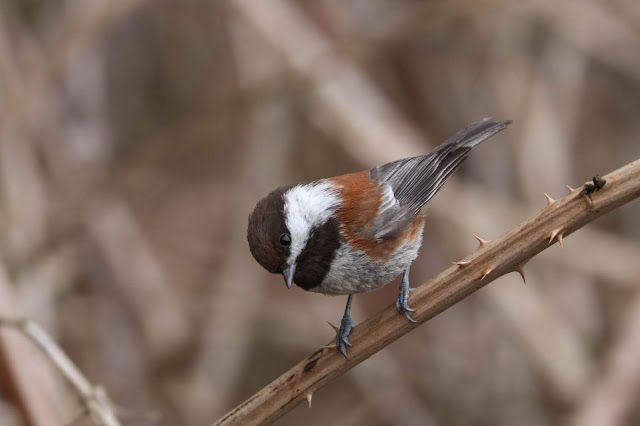 Chestnut-backed Chickadee pausing for a second! 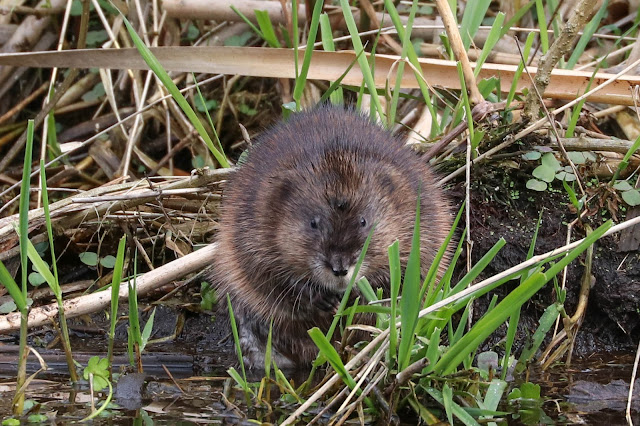 Muskrat!  I was so thrilled to find this native creature sitting in the exact spot where I'd seen a non-native nutria before.  A second one spooked from the shore and took off swimming, then unexpectedly hopped out of the pond, ran up a grassy slope, ran across the road, and scrambled back down to a different pond.  Maybe they're a pair?  Maybe there are tiny fur balls in my future?  Eh? 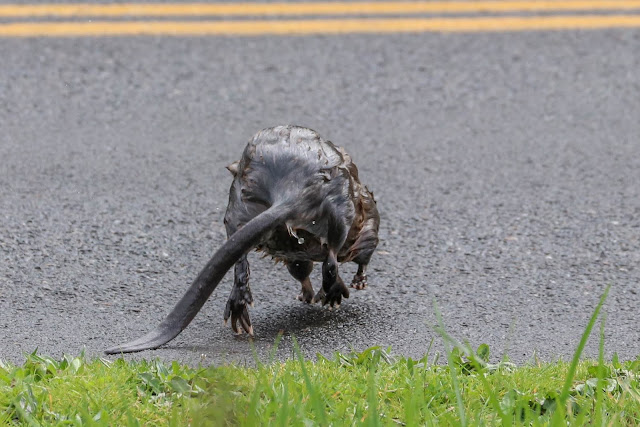 That's it from my 5MR.  Looking forward to more migrants, more wildlfowers, and more time spent outside!  Good times!! 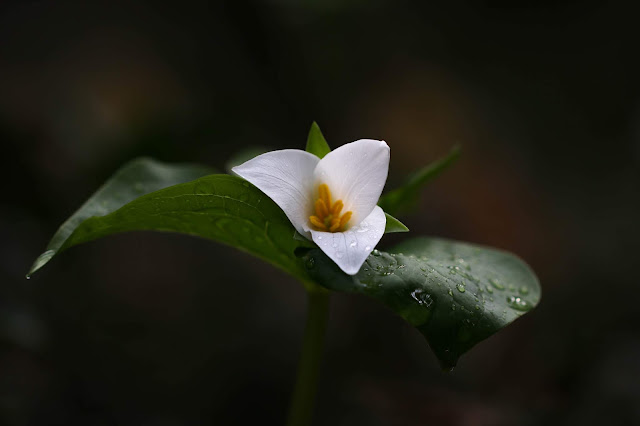