on April 18, 2019
A few months ago Jacob and I were talking about getting married and how we wanted to take a trip to celebrate afterwards.  It had to be less than a week long and it had to be somewhere we could both get life birds.  I did a target species search on eBird and got sucked into a blackhole of eBird checklists from Kauai involving Red-footed Boobies and all sorts of other fun birds.  I mentioned this to Jacob thinking it was probably unrealistic, but a quick search of flights showed there are direct PDX->Lihue flights daily.  Sold! 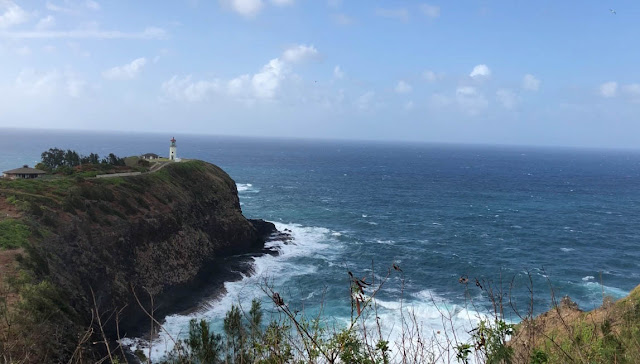 So...yeah, we got married last week and took off on Saturday for Kauai!  The first afternoon we were there we headed to Kilauea Point National Wildlife Refuge on the north side of the island.  We had been drooling over the checklists there and it was as amazing as we had hoped! 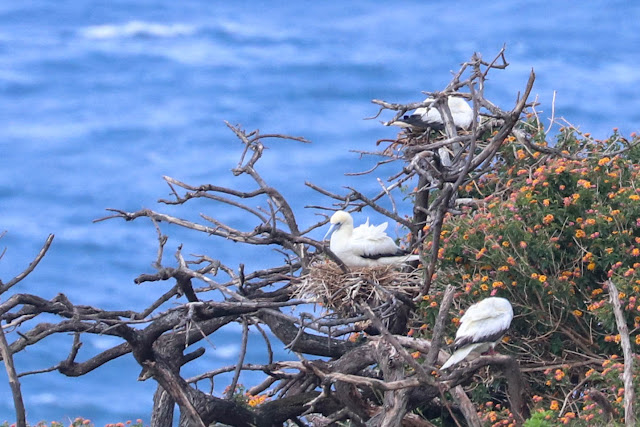 Red-footed Booby was our number one target and we were not disappointed.  They were flying around, sitting on nests, collecting nest material, doing all the things. 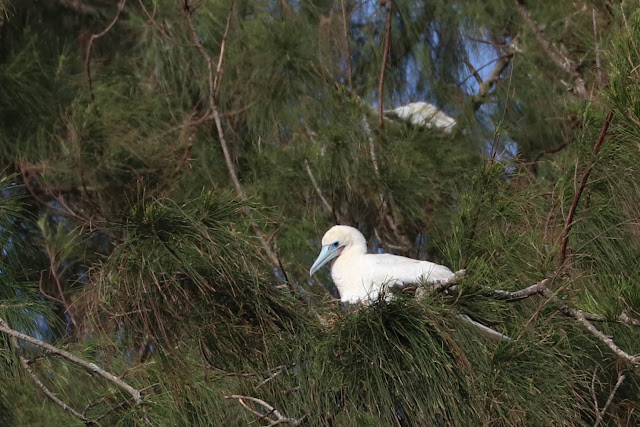 The second most conspicuous bird was the Wedge-tailed Shearwater, zipping around constantly. 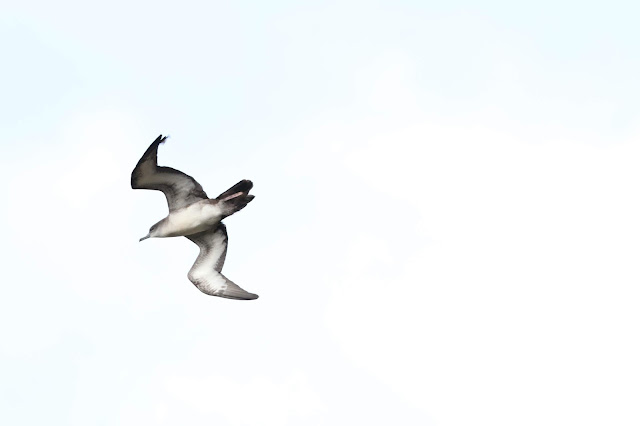 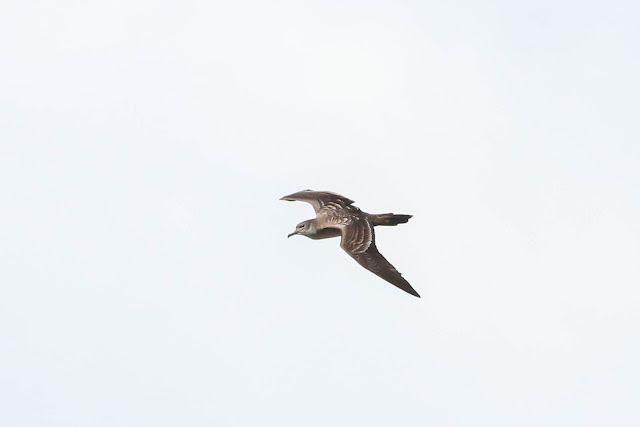 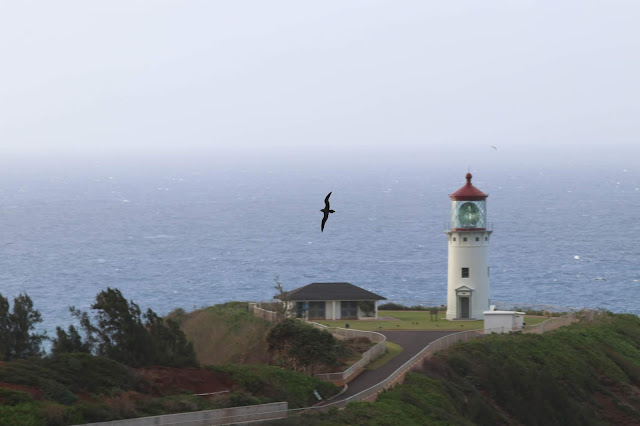 That road to the lighthouse is supposed to offer even better birdwatching but it's only open 10-4 five days a week. Though we visited twice, we never made it in.  Thankfully the lookout at the entrance was completely fine for watching the birds.

Brown Boobies were in the mix in smaller numbers. 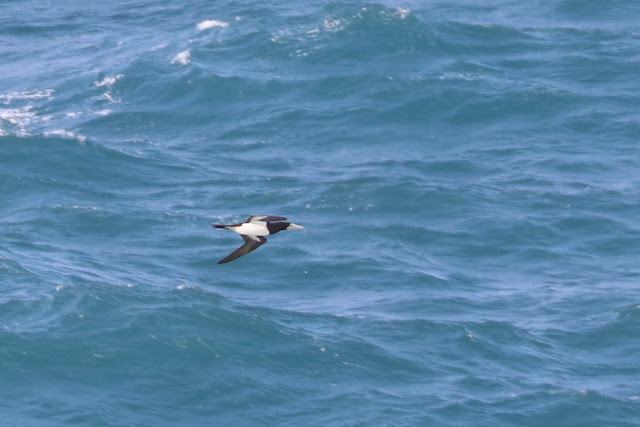 A pair of Great Frigatebirds showed up for a bit. 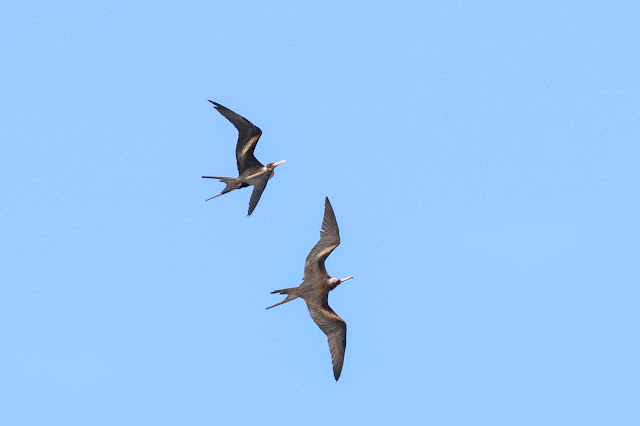 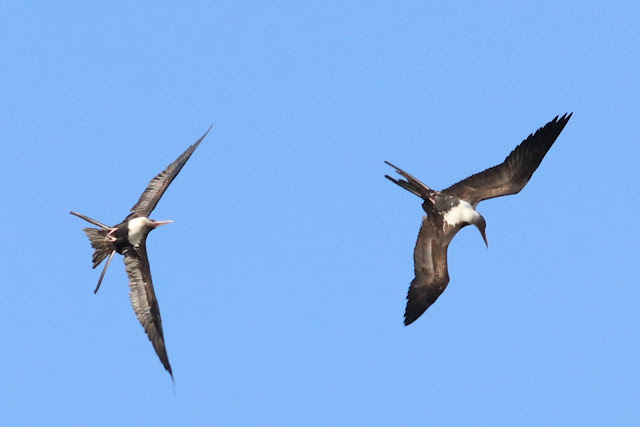 One woman standing near us declared, "I don't think these are all seagulls.  I think some of these are ducks."  It's hard to imagine life as a non-birder sometimes.

This shearwater flew over which might just be a dark Wedge-tailed: 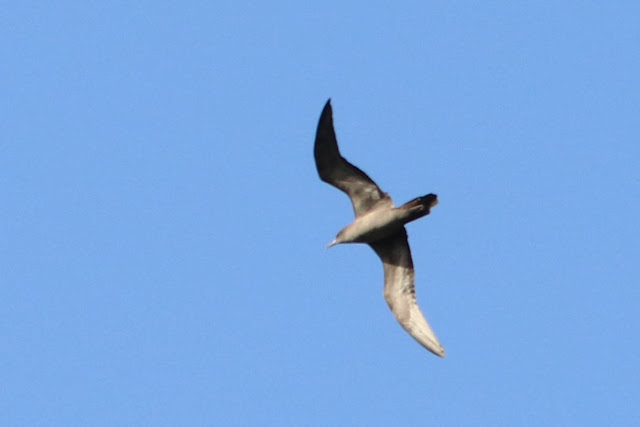 The most interesting bird of that day was this one: 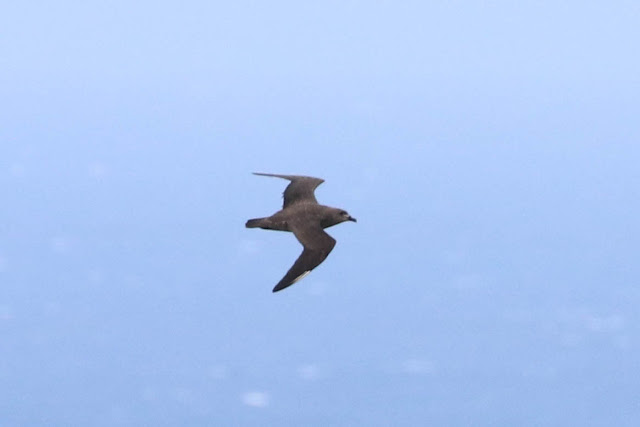 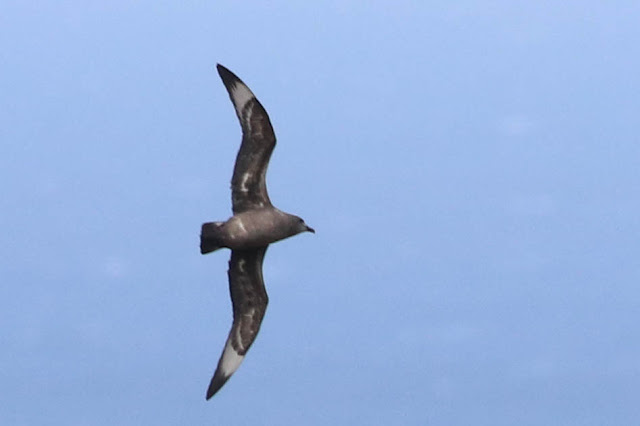 We were stumped for several days on this one, but on our last evening Jacob was looking at checklists and found a similar bird reported a week or two earlier:  Kermadec Petrel!  Definitely not a bird I was expecting to see!  That white on the leading edge of the wing combined with the pattern underneath clinches it.  I looked up Kermadec Petrel on the eBird species database and found there are only 664 checklists with this bird, only 84 with photos.  84.  For comparison, Red-footed Booby is on over 12,000 checklists, 1432 with photos.  Nifty!

The next day we ended up returning in the early afternoon thinking it would be open (closed Sundays and Mondays, oops) but still had a great time.  This time the tropicbirds stole the show. 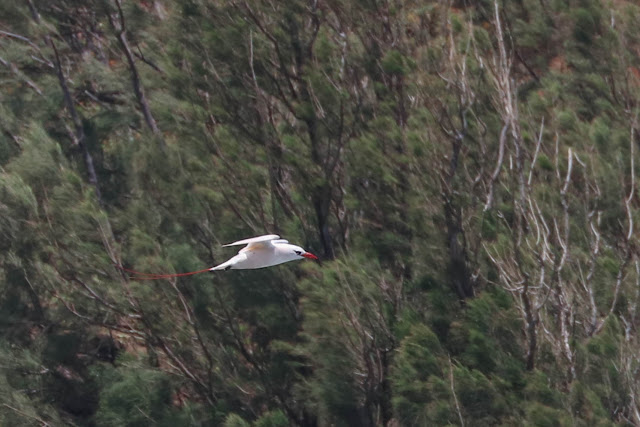 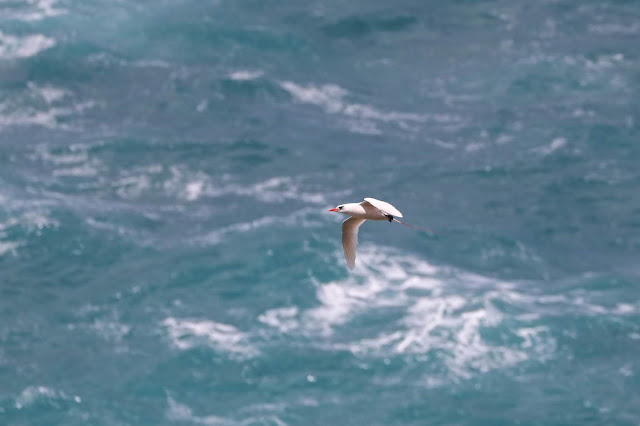 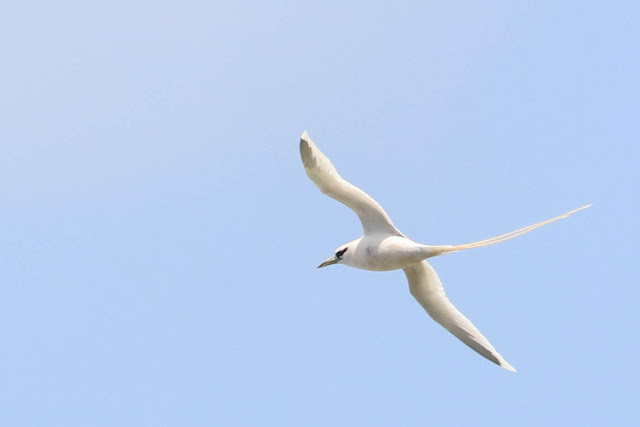 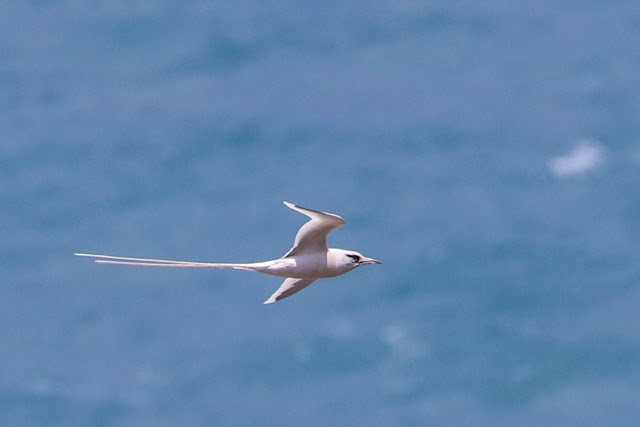 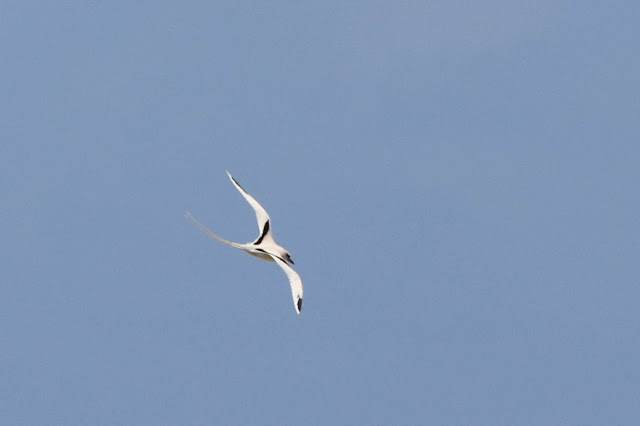 
Then a Laysan Albatross finally made an appearance! 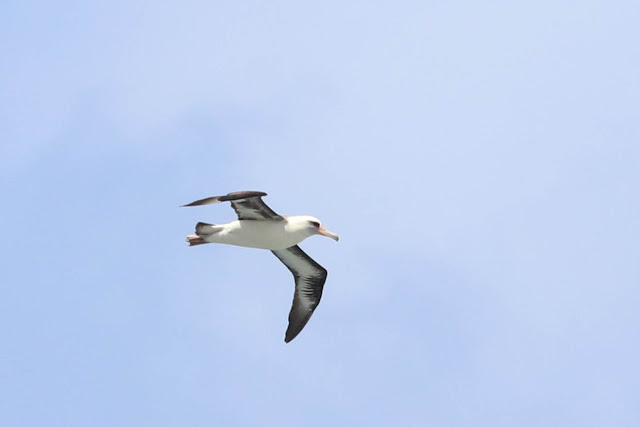 The Red-footed Boobies continued to be awesome, even showing off their red feet as they prepared to land on their nests. 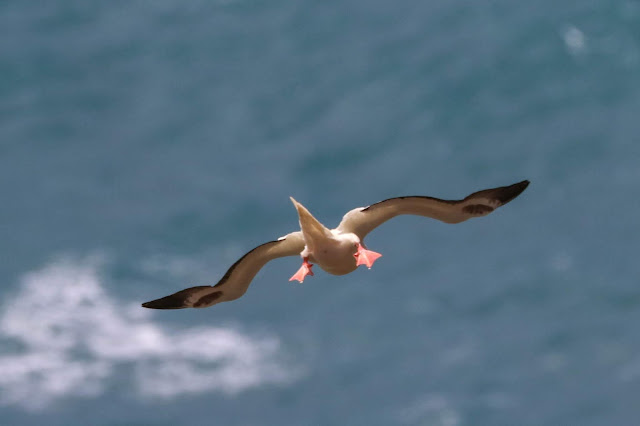 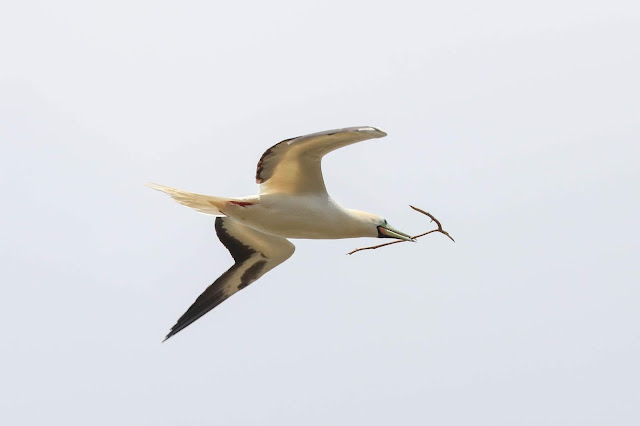 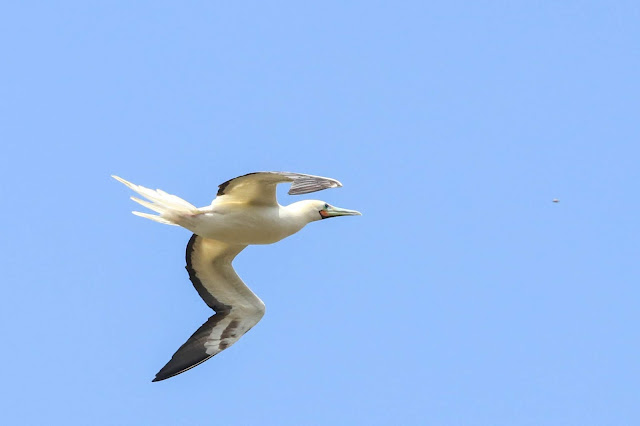 And a blurry but cool dark adult: 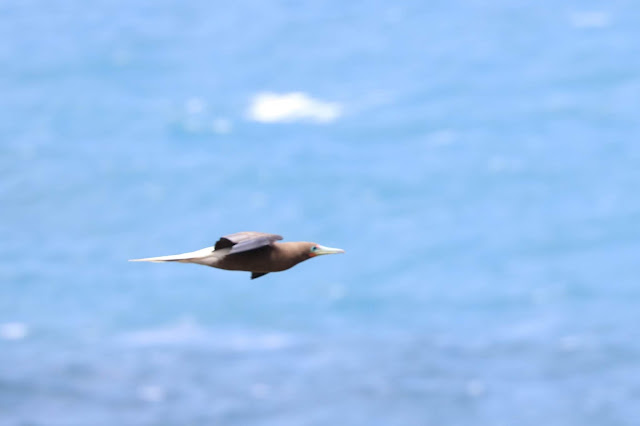 eBird checklists from our time at this spot can be found here and here.

I (obviously) have tons more to share from this trip but couldn't wait to share the birds that inspired it!  Thanks to Jacob for being a great travel/birding/life partner!  Good times!!!! 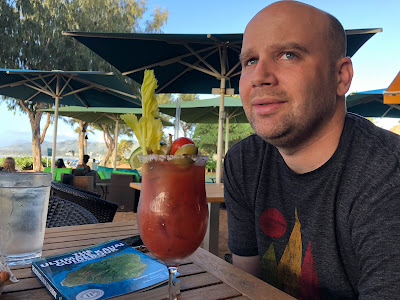