on May 03, 2019
Here it is, my last post from our Kauai trip!  We had been hoping to get on a boat while we were visiting and the local I had been in touch with recommended Holo Holo Charters.  They offer a boat trip along the Napali Coast plus snorkeling at Lehua Crater, by the "forbidden" island of Nihau.  This was perfect because it would increase our odds of seeing more seabirds, as some nest at Lehua that are harder to find closer to Kauai. 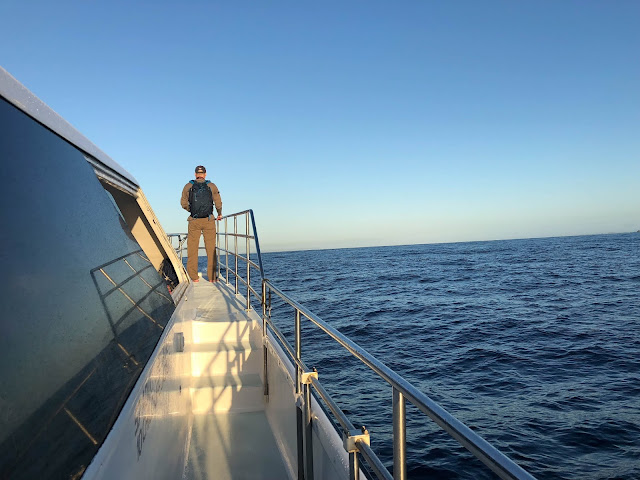 We set sail bright and early and first rode up and down the Napali coast.  It was pretty, though the sun was coming up behind it and I found it a bit hard to look at. 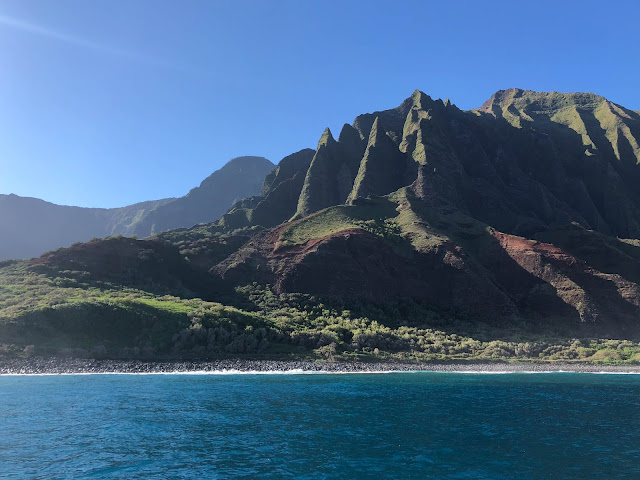 We quickly stopped for a bunch of spinner dolphins that swam along and in front of the boat.  Lifer mammal! 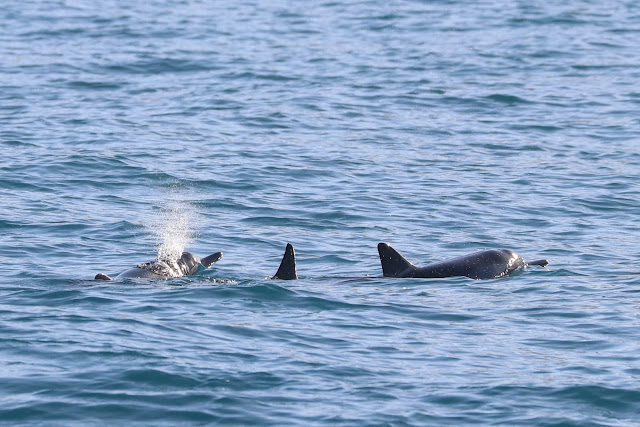 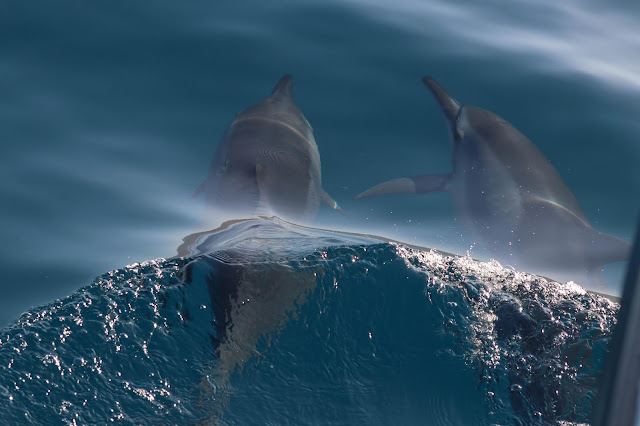 Next we approached one area of coastline where there was a cave and tons of our lifer Black Noddys. 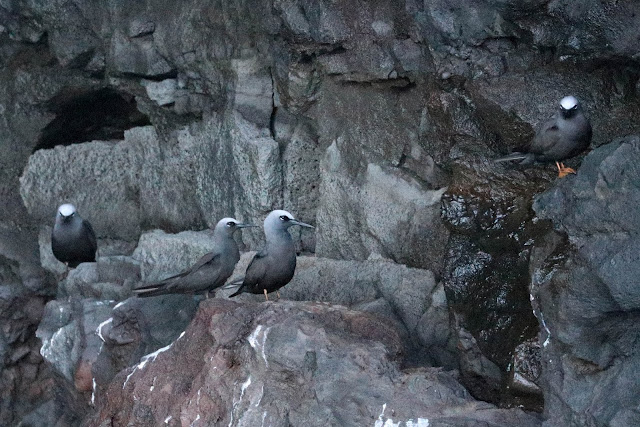 As we cruised away someone pointed out a sea turtle, the only one we saw on our whole trip. 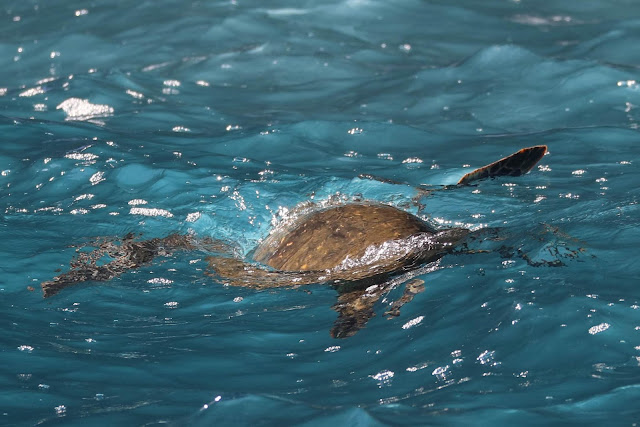 We approached another section of coastline where a Brown Booby was perched. 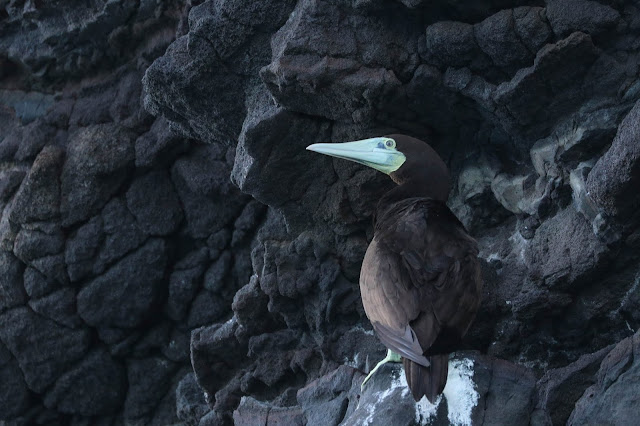 From the Napali coast we would be cruising straight out to Lehua and Nihau which is a fairly long distance.  When a humpback whale breached in the distance we just kept on going.  Jacob and I tried for some seabird shots but it was not easy. 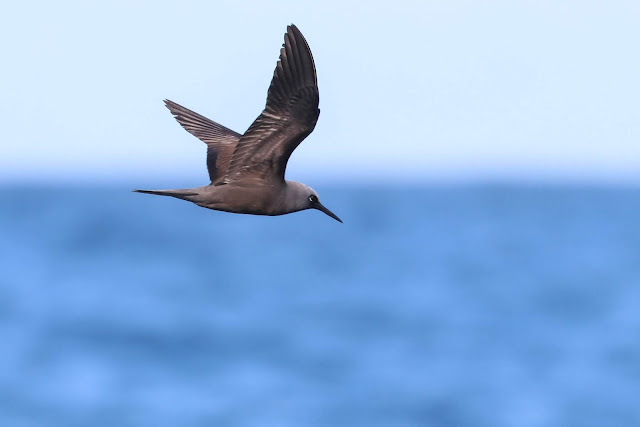 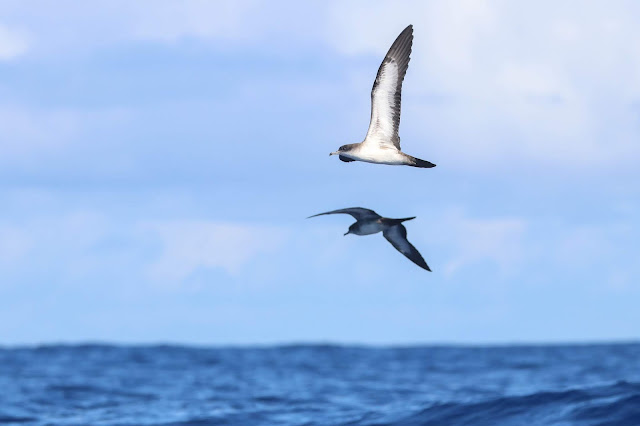 At the snorkel spot I had been planning on snorkeling until the day before I scratched my eye and wearing contacts became unbearable.  Snorkeling in glasses or blind didn't sound fun so we both decided to hang out on the boat and bird with beers instead.   Laysan Albatrosses came by first. 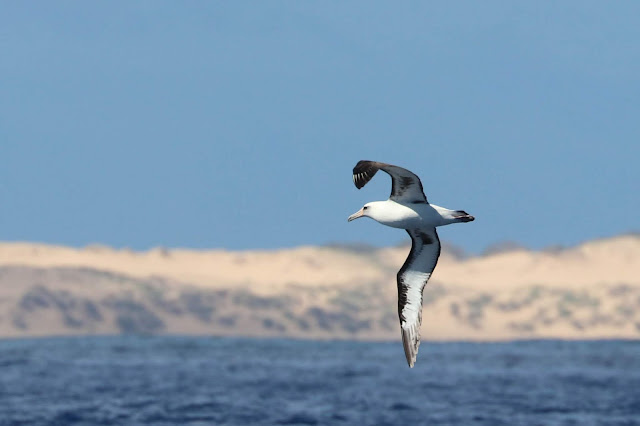 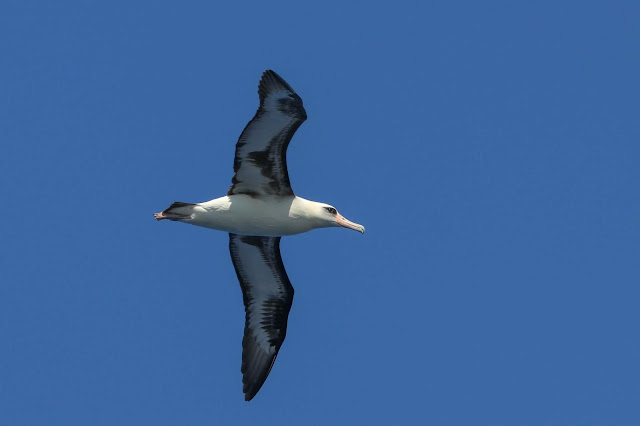 Also around were tons of Red-footed and Brown Boobies, more noddys (noddies?), more shearwaters, tropicbirds, frigatebirds, and some hard to ID quick flybys. 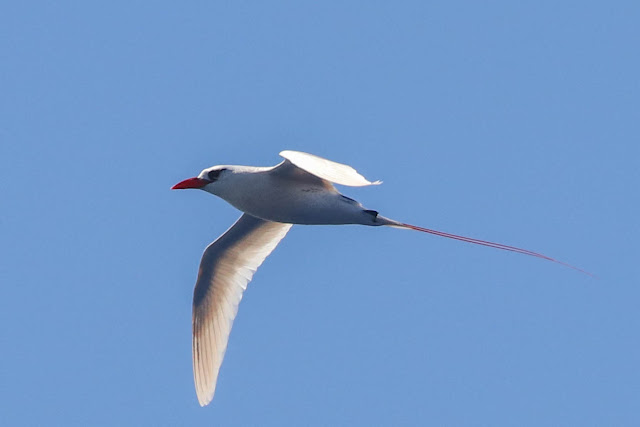 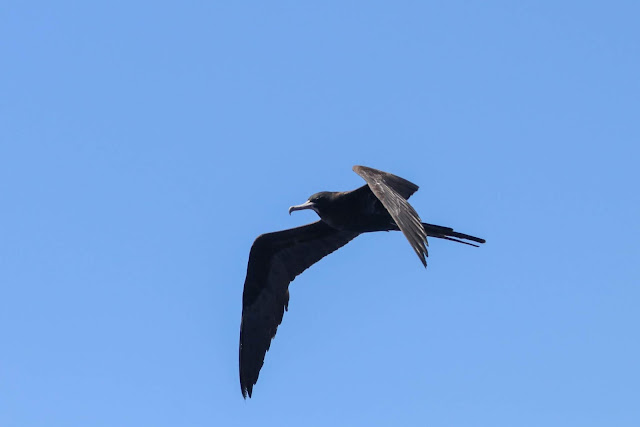 A Black-footed Albatross was a nice surprise: 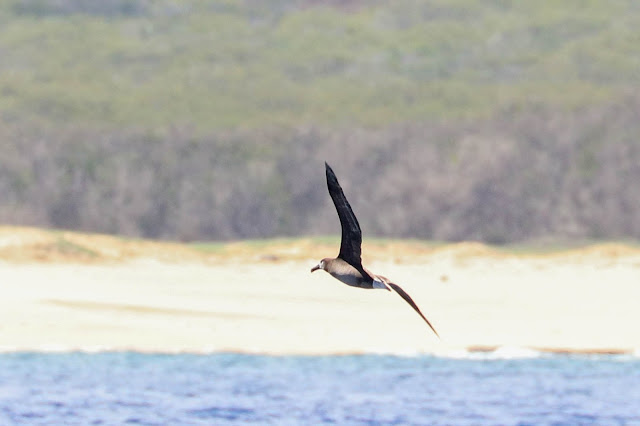 Everyone seemed to see cool stuff while snorkeling.  From above we could see quite a few fish and even watched a reef shark swim by.  This is not the shark: 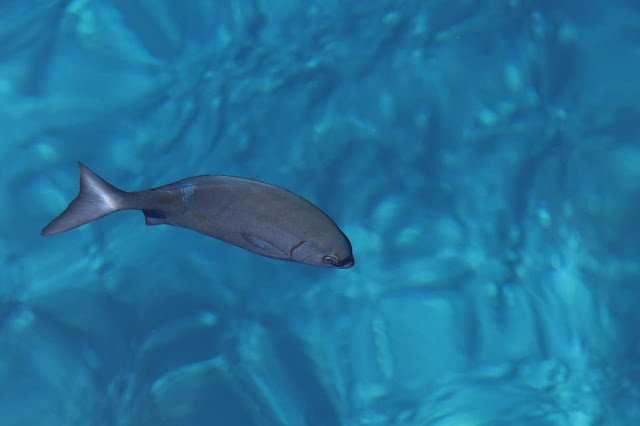 After snorkeling everyone ate sandwiches and started drinking.  When we began heading back to shore they cranked the music and gunned it.  I found it pretty unpleasant, between the drunk girls dancing and stumbling around, the bad music blaring, and trying to watch for birds without also watching people puking.  It was not a smooth boat trip and I was grateful I had remembered to take Bonine.

Overall I would not recommend Holo Holo if you are hoping for wildlife aside from snorkeling.   It was basically a really expensive party boat with free sandwiches and beer.   The only birds we added for the trip were Black Noddy (lifer for both of us) and Black-footed Albatross (lifer for Jacob), which could probably be seen on a much shorter and mellower whale watch boat.

After the boat trip we decided to check out Kawaiele State Waterbird Sanctuary, the site of a former sand mine. 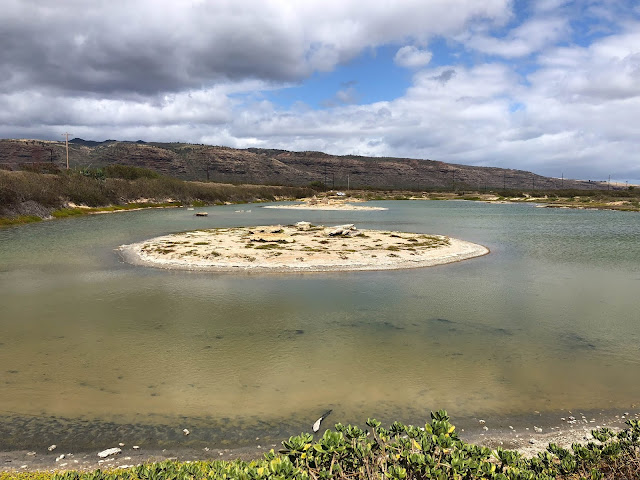 It was very sunny and warm in the mid-afternoon but we managed a few new birds for our trip list including Ruddy Turnstone, Wandering Tattler, and Sanderling.  None of those birds posed for pics. 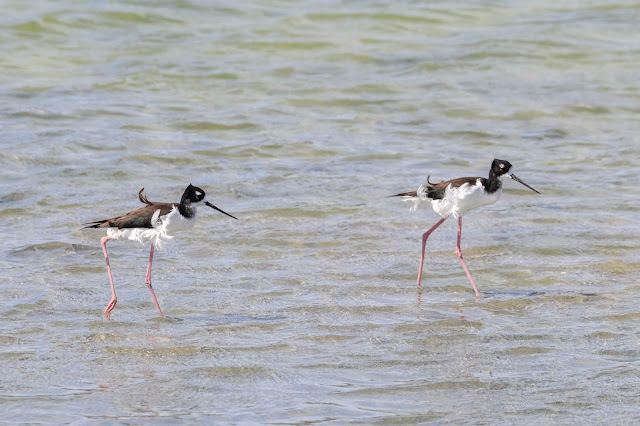 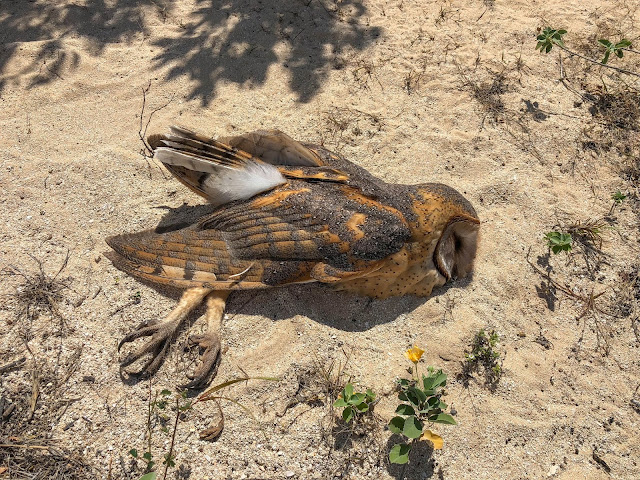 Dead barn owl on a side trail 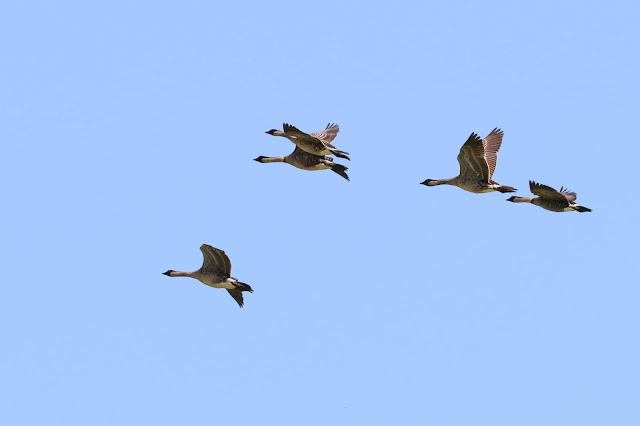 I could see this spot being great early in the morning, but mid-afternoon is a little rough with no shade and a lot of glare.  Our measly eBird checklist can be found here.

We made one more stop at Kauai Coffee for gifts before heading back to the condo. 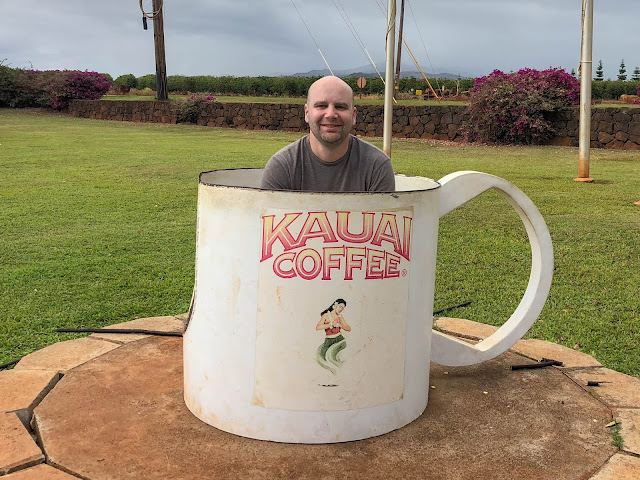 That about does it for our trip to Kauai!  We really liked the condo we stayed at, Wailua Bay View near Kapa'a.  It was more reasonably priced than most of the Airbnbs and Vrbos we looked at, had a full kitchen, a balcony overlooking the ocean, and a nice pool.  Plus Red-crested Cardinals were always offering to help clean up. 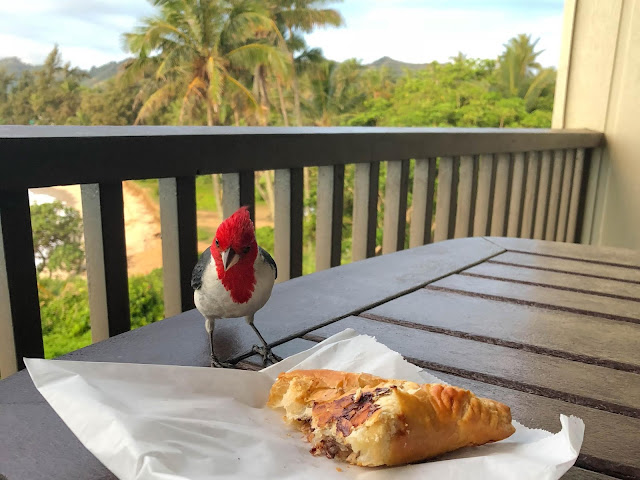 And this guy lived by the outside trash cans: 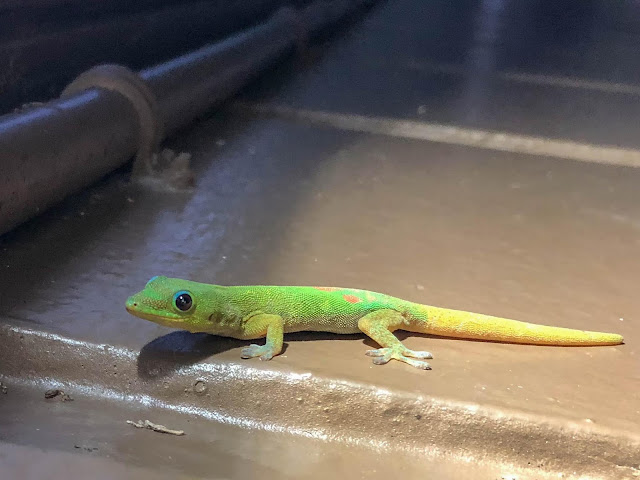