Yesterday I decided to participate in eBird's annual Global Big Day event by completing a Big Day in my 5MR.  My game plan was to hit my best owl potential spot, get migrants and singing birds early, then collect the river birds and ducks, and clean up whatever else I needed last.  It kind of worked.

Here's the story.  I left the house early, before even Jacob left for work, and made it to my first stop, Burnt Bridge Creek near NE 147th Ave, before 5:00 a.m.  All I heard were Savannah and White-crowned Sparrows, towhees, and robins.  I drove to the other side of this massive field on NE 162nd Ave and pulled over when I saw an owl fly across the road. 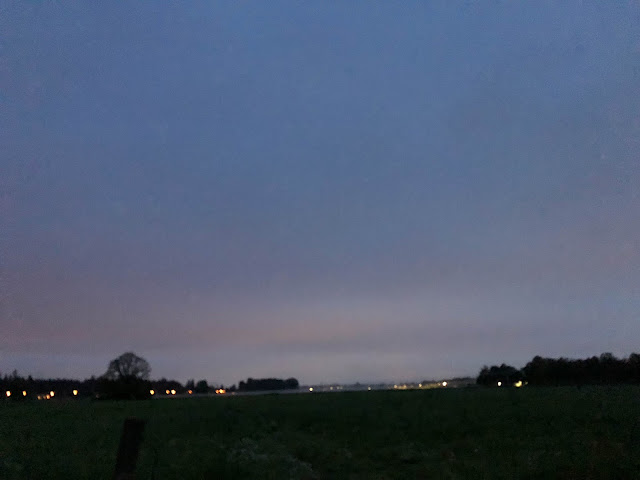 I waited and eventually saw it or another one fly across the field, definitely a Barn Owl!  I watched it a couple more times before heading back over to 147th.   There I walked down the road a bit and was surprised to find a bunch of migrants in the oak trees.  It was still pretty dark so no pics, but I had Warbling Vireo, Wilson's Warbler, Orange-crowned Warbler, and Common Yellowthroats.  In the field a family of coyotes kept an eye on me.

From this spot I wanted to make a quick trip to David Douglas Park which I knew would have singing Pacific Wrens plus possible Hutton's Vireo and Pacific-slope Flycatcher.  An Osprey greeted me on arrival. 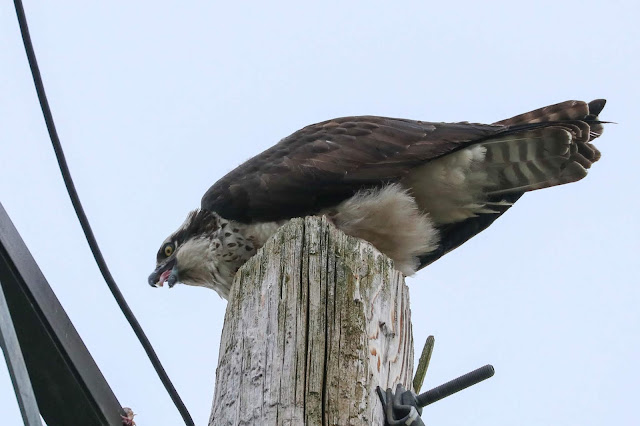 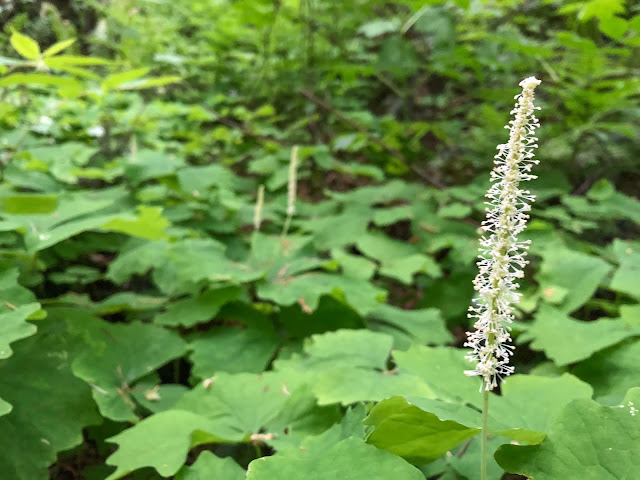 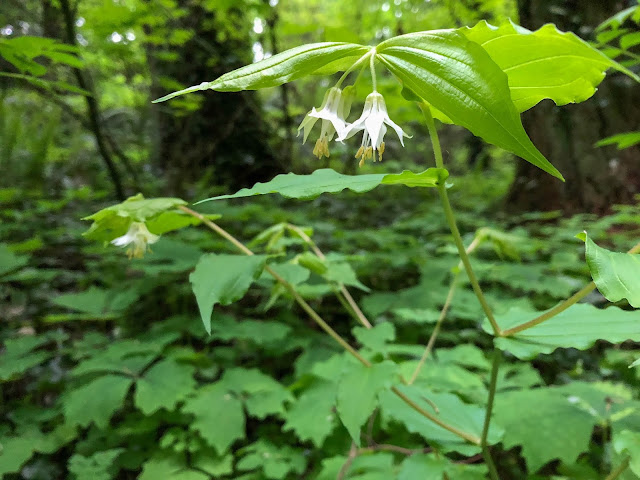 I did manage Pacific Wren here but dipped on the other targets.  At this location a week or two ago I picked up my county Chipping Sparrow so I made sure to check that area again.  Sure enough, I heard this when I arrived:

I could hear two singing and possibly a third!  I took a few shots of this one on the ground: 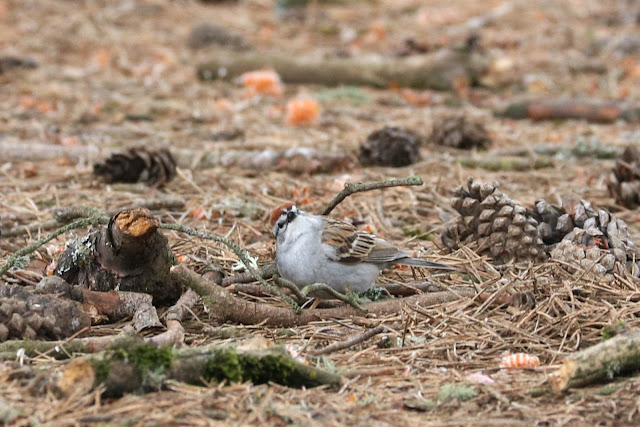 This Mourning Dove didn't fly away from me so I took its picture.  Good story, I know. 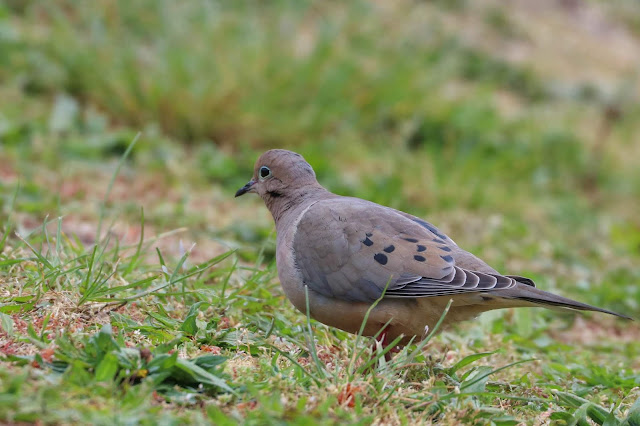 I got back to my car by 7:55 as I had hoped and found another Chipping Sparrow.  Ummm you guys aren't nesting here, are you? 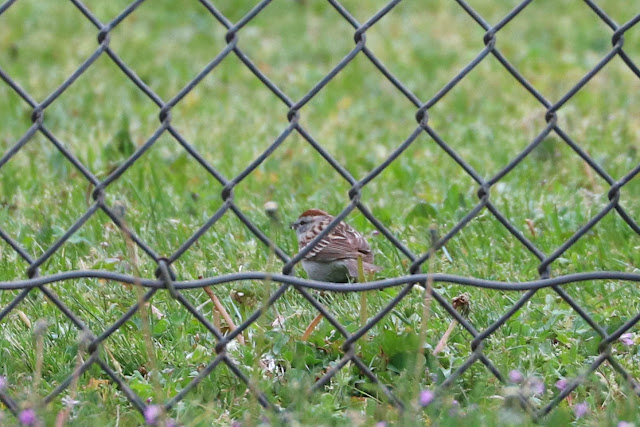 Downhill from David Douglas is my favorite birding spot, my patch, Meadowbrook Marsh.  I got started there at 8:00 as I had planned and quickly found the best bird of the day, an Olive-sided Flycatcher!   I heard the demand for beers, looked up, and there it was. 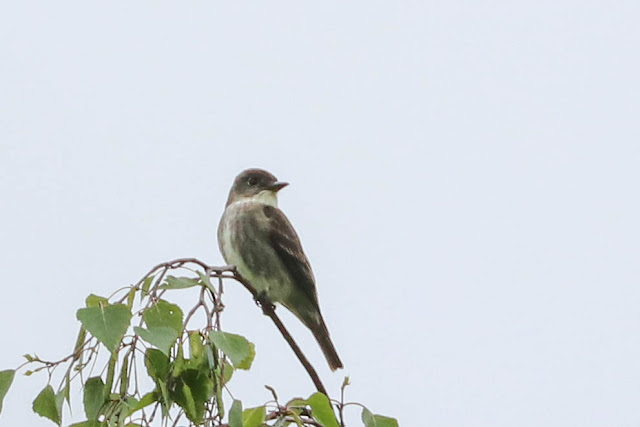 This is probably the lowest elevation I've ever seen one at.  It perched briefly next to a Brown-headed Cowbird which made for an unexpected (to me) size comparison. 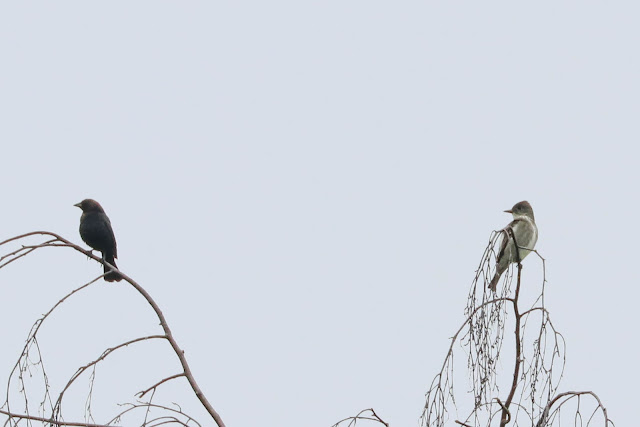 Per Sibley, the cowbird weighs slightly more but the Olive-sided has a slightly bigger length and wingspan.  WILD.

After I finished my happy dance I continued on birding my patch, collecting lots of day birds.  Rufous Hummingbirds were extra abundant. 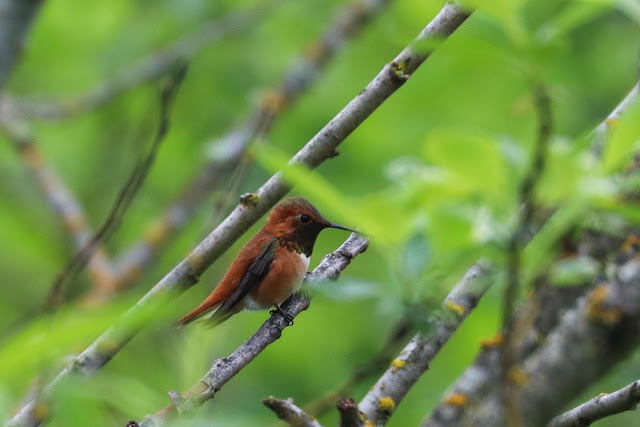 Side note:  customers at work often ask what to plant for hummingbirds and I always tell them native twinberry.  It doesn't look like much but it is so great.  It was one of my favorite things in my old yard as it started blooming in April and would often still be blooming into November, unlike many other flowers the hummers like. All the proof you need.

Much of the trail west of NE 86th is thick with migrants this time of year.  I quickly added a bunch more including Black-throated Gray and Nashville Warblers, Black-headed Grosbeak, Western Tanager, and Hermit Thrush. 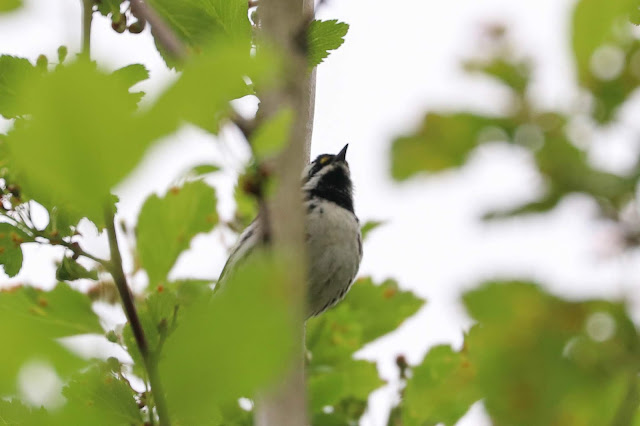 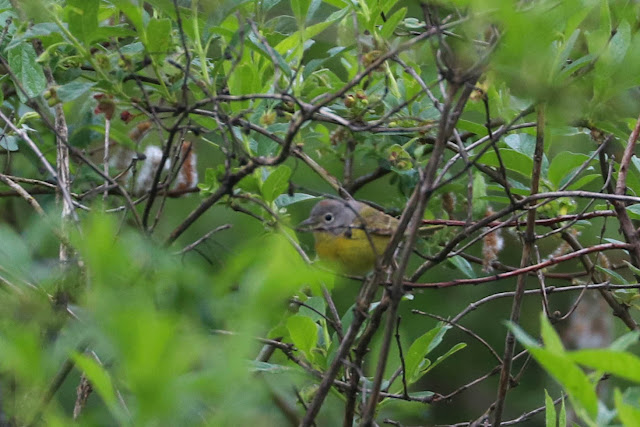 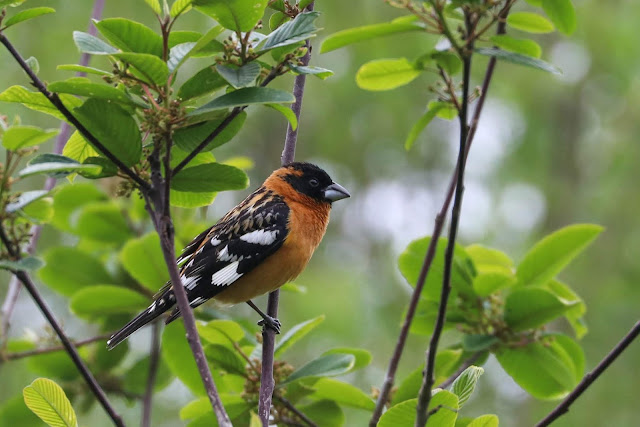 And some more migrants that weren't new but still pleasant... 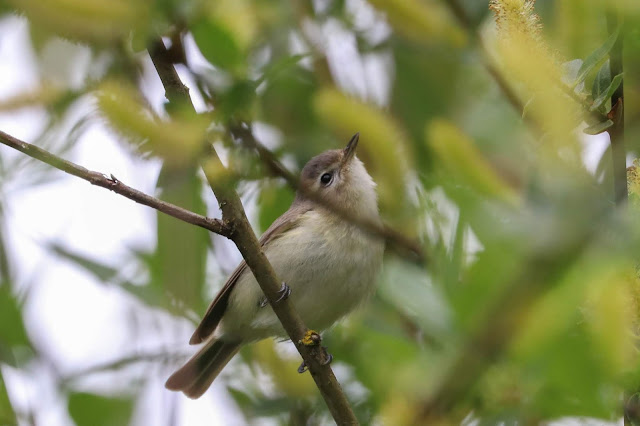 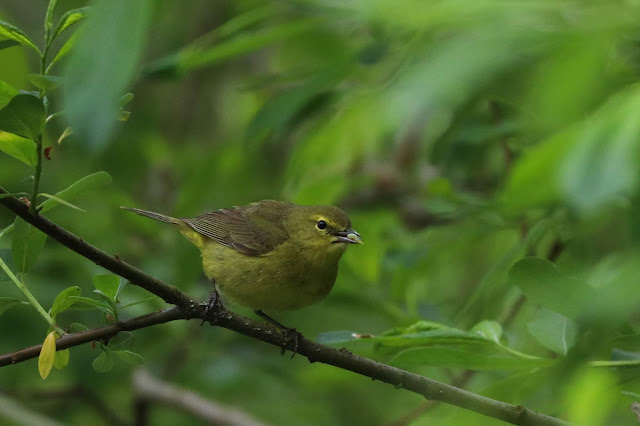 This is about when I feared I lost all of my bird karma.  An older man who I've seen here before stopped next to me with his off-leash dog and started telling me how he took a good video of some deer nearby.  I tried to be nice and polite in response, but then he followed up with the dreaded, "Do you want to see my deer video?"  Ughhhhh no.  I said "I'm good, but thank you!"  Which is probably the equivalent of punching this old man in the face.  But I really couldn't bear the thought of standing there with him staring at his phone, trying to think of nice things to say.

Sure enough I got to the pond where I was hoping for ducks and it was empty.  Like no birds.  Not even a goose.  Plus there was a woman possibly suffering from a mental health issue collecting sticks and putting them carefully in piles, who looked much like that woman from Goonies that tries to put the kid's head in the blender.  I should have watched the damn deer video.

I walked back down the trail to my car, not adding anything new for the day, but an active female Rufous was fun to watch. 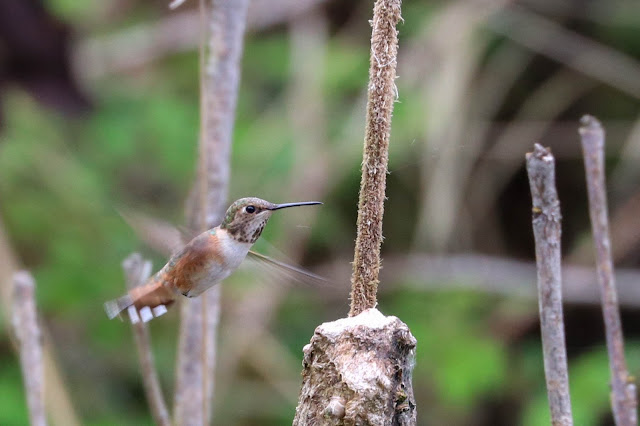 From here I headed home to let the dogs out, eat lunch, and replenish my snack and water supplies.  At this point I was at 55 or 56 species.  My plan was to head to Marine Park and clean up the river birds I needed, then go over to Biddle Lake for anything else I might need.  At Marine Park the Violet-green Swallows were resting on barbed wire. 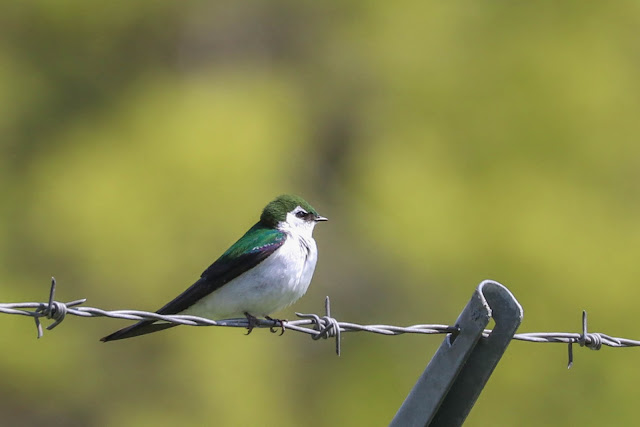 In the river I saw zero ducks.  Zero grebes.  Zero birds at all.  Oh wait, a couple Mallards.  Ugh.  Back in the field a Cooper's Hawk zipped by (not a new bird) and I followed it to what I think is its nest.  At Tidewater Cove I finally managed a flyby cormorant but still no gulls or terns.  I was also grateful to have a pair of Rock Pigeons fly over since I forgot I needed them and would have missed them.

I only added 4 species at Marine so headed over to Biddle Lake with high hopes.  At the Pileated Woodpecker spot there was no evidence of Pileateds.  There was no Belted Kingfisher flying around.  Thankfully I did see a bunch of Wood Ducks and a lone Gadwall.  No Pied-billed Grebes.

As I made my way around the north side of the lake I heard a chip sound.  I wasn't sure what it was but the first bird to pop into my brain was MacGillivray's Warbler so I stopped and spent several minutes tracking it.  Finally it popped out and indeed!  A MacGillivray's!  Another happy dance ensued as this was a second brand new 5MR bird!  It of course disappeared behind a million branches and I could not focus my camera on it.

On my return walk I saw this sapsucker disappear into a hole, so I'm hoping its a nest cavity. 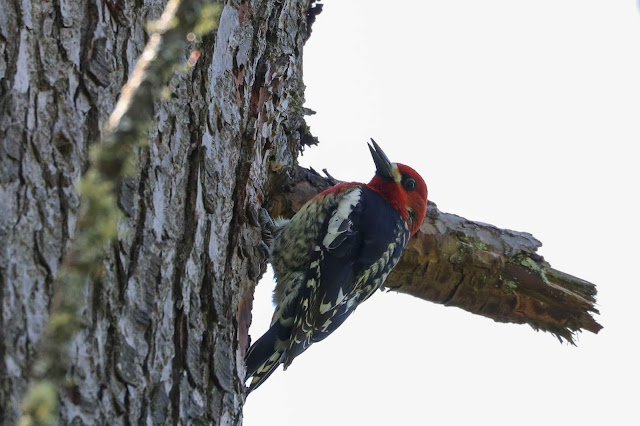 I completed the loop and sat down on a bench to rest and hope for a kingfisher. 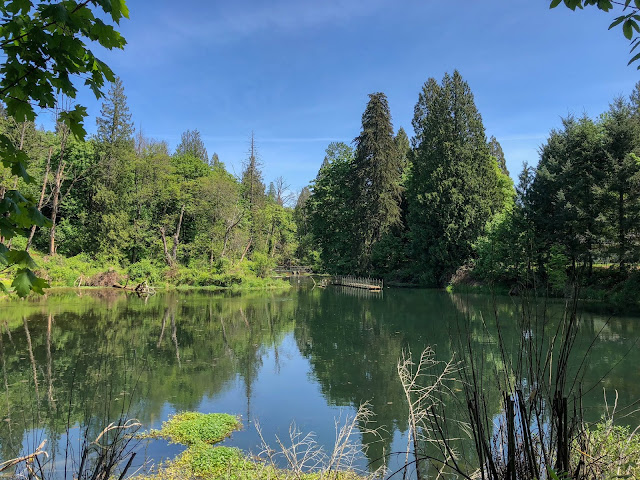 Western Tanagers were flycatching out over the lake while my only Bald Eagle of the day soared over.  Some swallows moved through including my only Northern Rough-wingeds of the day. 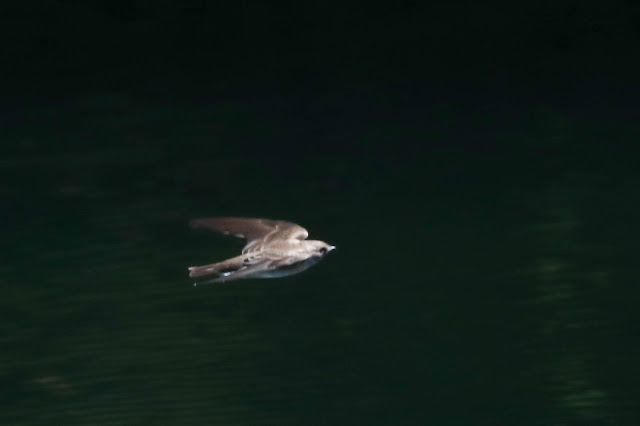 I gave up on kingfisher and drove over to the ponds up the road.  Here I had my only Hooded Merganser of the day and heard a Virginia Rail. 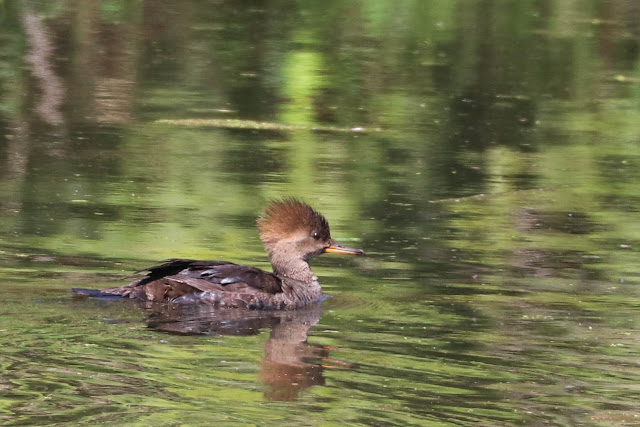 Also, my only turtle of the day, a red-eared slider. 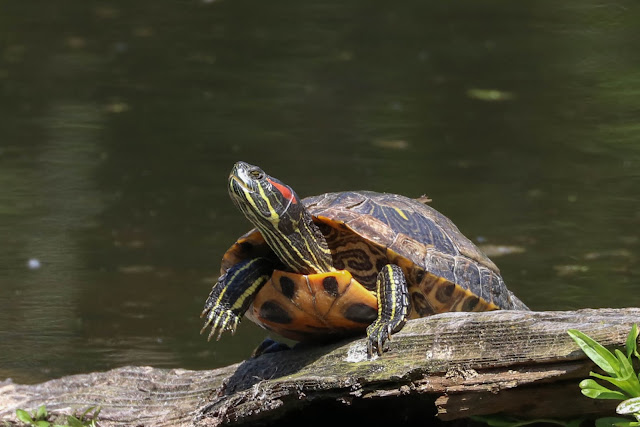 Sure, I could have gone back out for more after rehydrating but ultimately decided I had already hit all the spots I wanted to hit, had a good time, and why not quit while I was ahead?  I added new species to every hotspot I visited, filled in lots of eBird bar chart gaps, and came home with a smile on my face.  Good times!!!