on May 30, 2019
A month ago Jacob and I bought a house in Lincoln City on the central Oregon coast.  We had been looking for awhile, checking out everywhere between Yachats and the Long Beach Peninsula, before we finally found this house that had almost everything we wanted.  It's on a half acre with only one real neighbor, it backs up to protected green space (one of Lincoln City's many Open Spaces), it's a quick walk to Devils Lake, a slightly longer walk into town, and you can hear the ocean when standing in the backyard.  The house itself was built in 1940 and has tons of what you might call character. 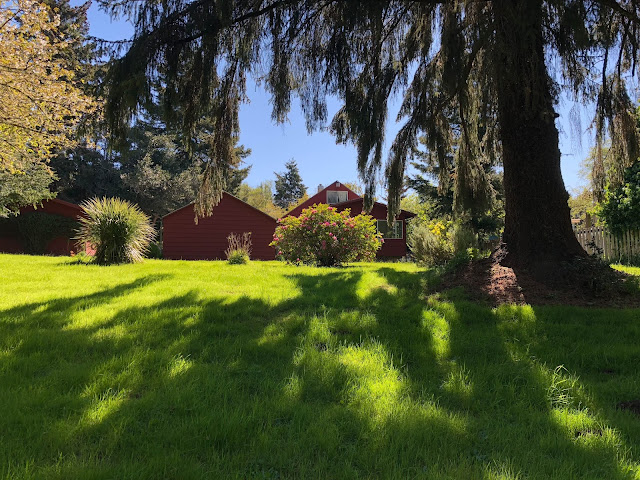 I believe this is what some folks call their "future forever home."  We can't move out there yet but when we do it will be for the long haul.   Till then there will be lots of visits!  We've been out there almost every weekend to get some work done, but also to do some birding.  Let's start with the yard birding... 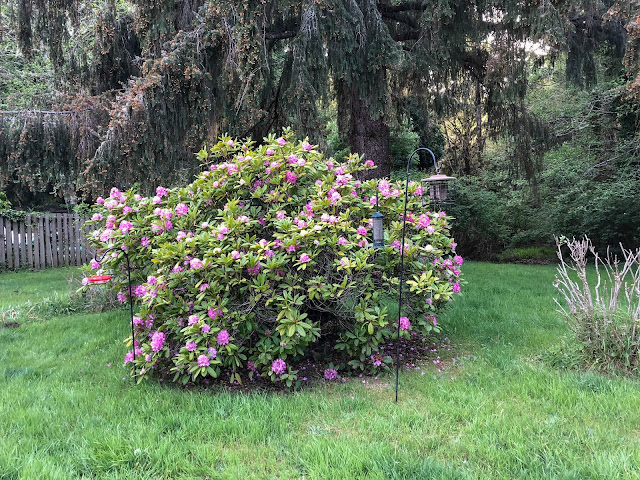 We set up feeders right away along with a bird bath, but the biggest bird attraction seems to be this massive Sitka spruce: 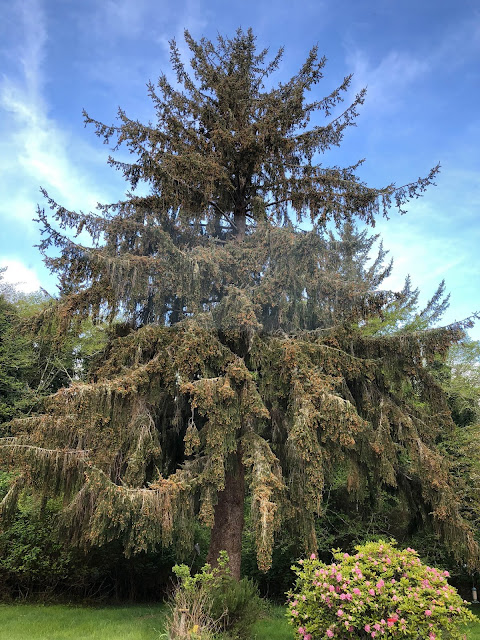 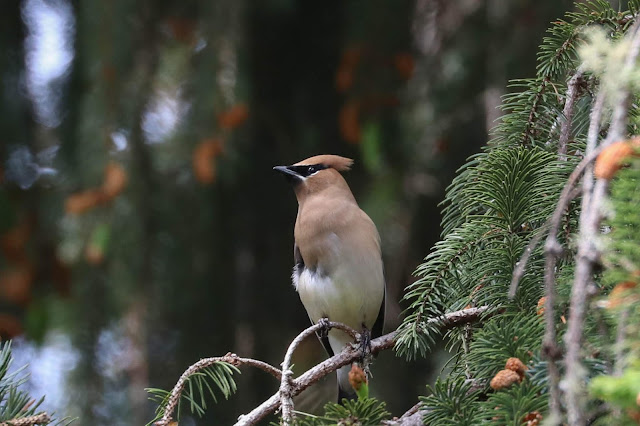 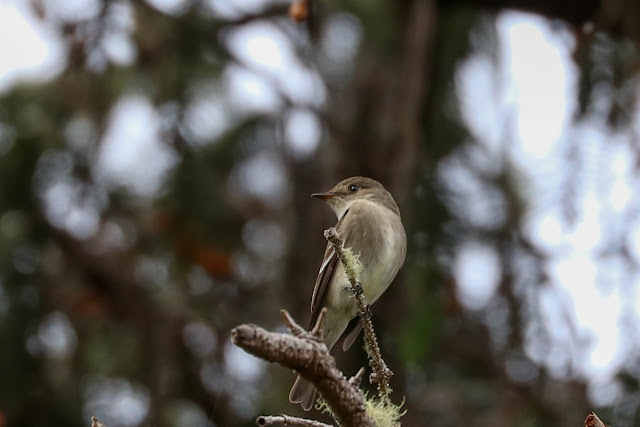 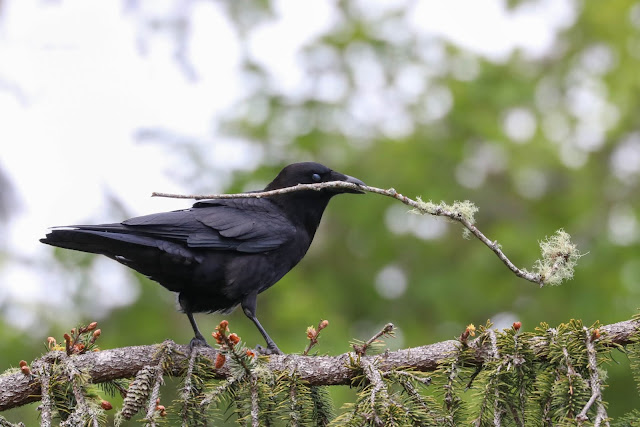 The green spaces that borders the back of the yard is filled with more bird sounds from Pacific-slope Flycatchers, Swainson's Thrushes, Pacific Wrens, Wilson's Warblers, and more. 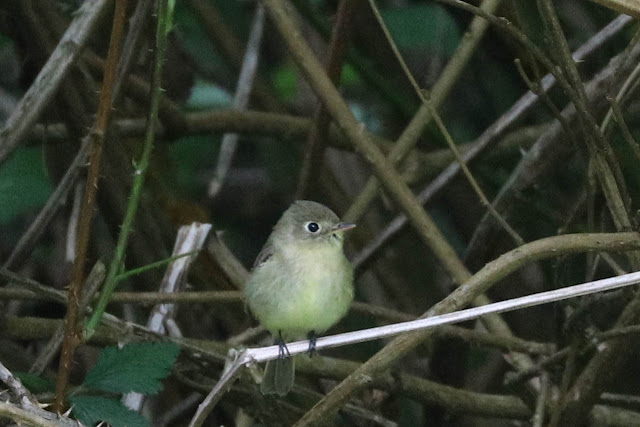 Band-tailed Pigeons spend a lot of time flying over the yard, hanging out in the trees, being big and goofy. 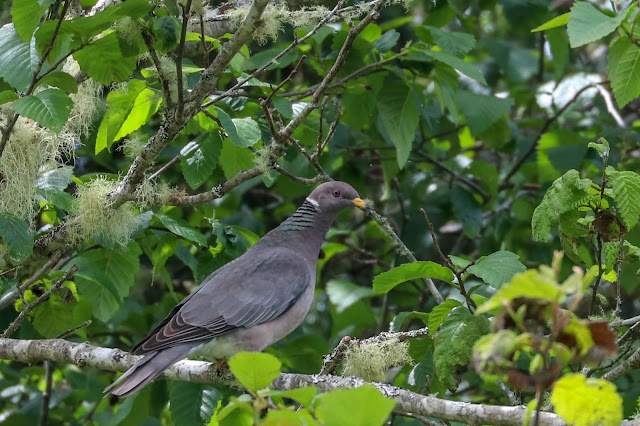 The absolute best yard bird we've had so far was spotted by Jacob when we were taking a break from installing blinds. 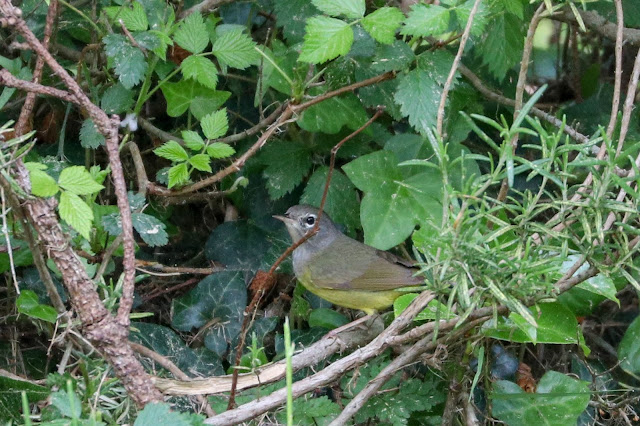 MacGillivray's Warbler!  Gotta love it when eBird shows a little red dot for frequency.  I'm up to 34 species in the yard so far and I think Jacob has even more. 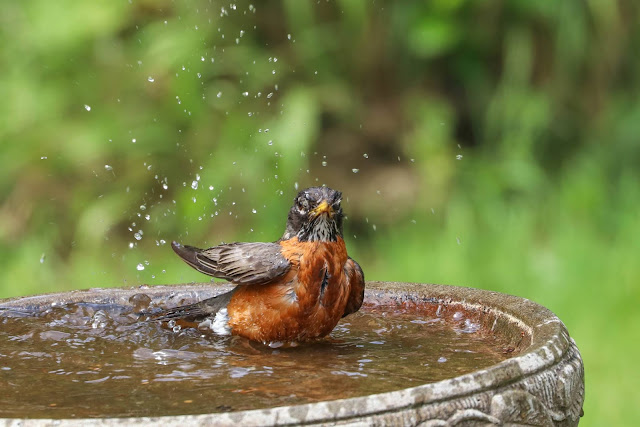 We've been to one of our local beaches, Roads End State Park, twice to see what we could find. The first time was a sunny evening walk near high tide.  A bunch of flying ants had made up most of the wrack line on that trip which was weird and interesting. 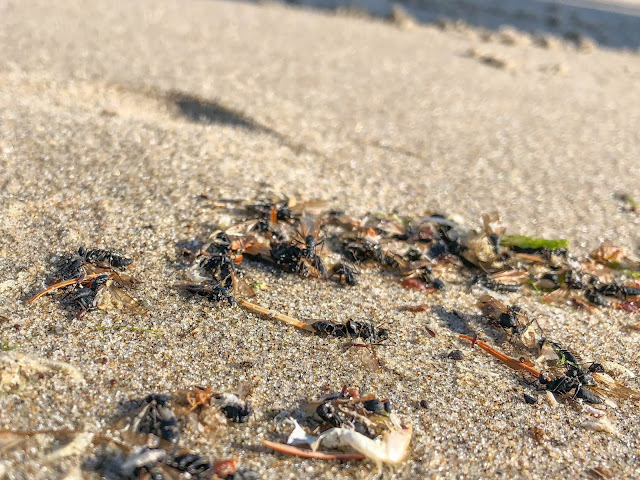 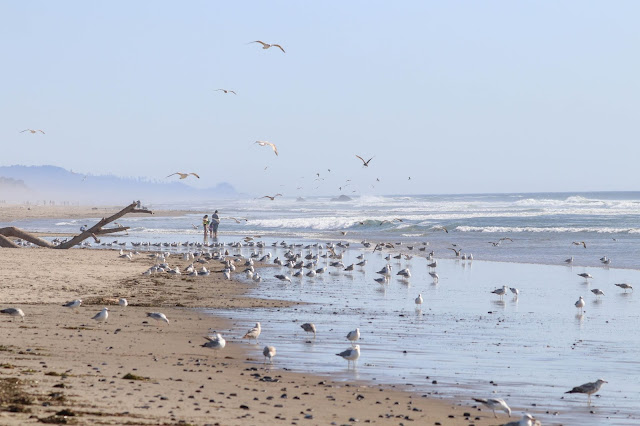 The gulls were snacking on the ants as well as a random robin.  We had been hoping for shorebirds and when we finally saw some we were not psyched to see the child that followed... 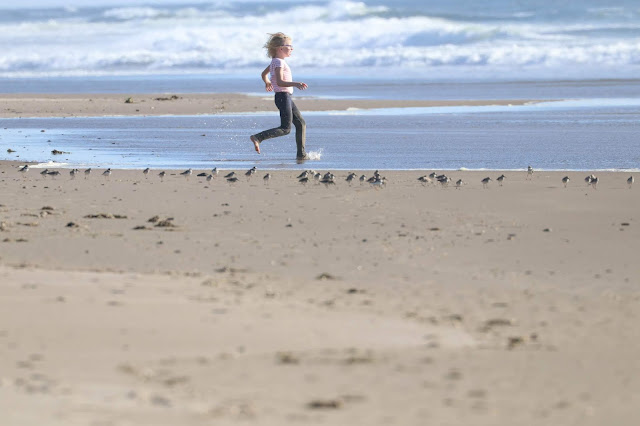 Eventually the birds were spooked towards us and into better light, so it was all okay. 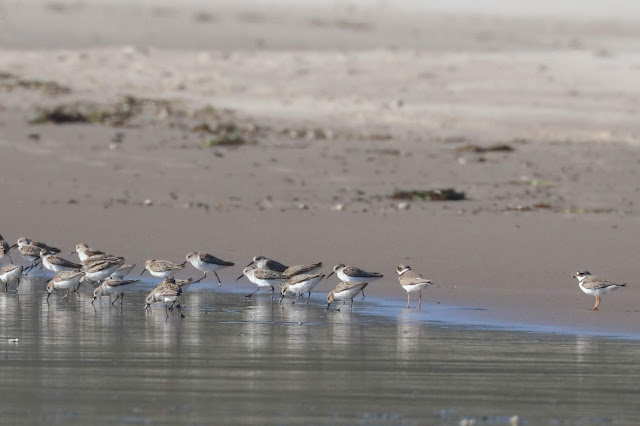 Mostly Westerns with some Semipalmated Plovers

Our second visit to this beach was a misty rainy foggy morning and this time the wrack line was all Velella velellas. 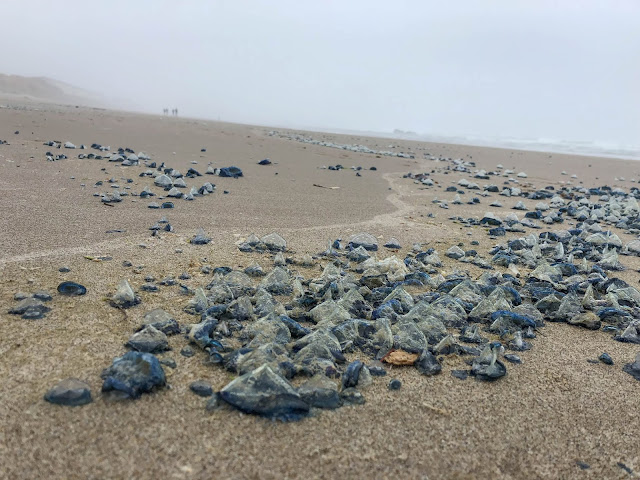 These are also known as By the Wind Sailors.  They're not jellies but rather hydrozoans, and when the wind is right thousands of them get blown to shore and die. Blue means fresh, clear means dead. 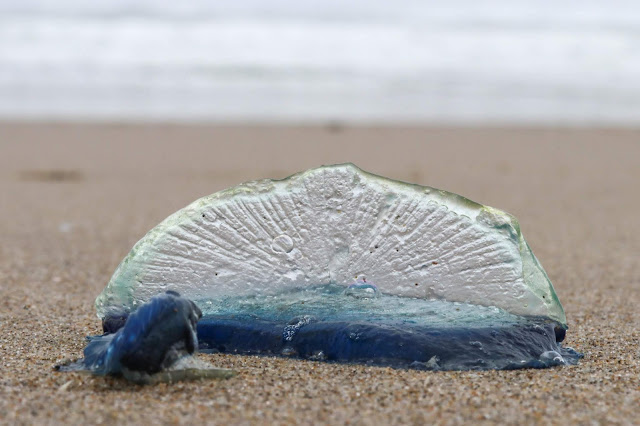 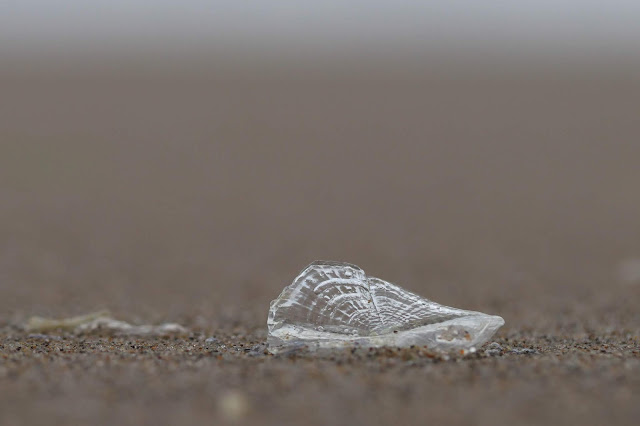 We had a few good birds on this wet morning including Whimbrels, a Black Oystercatcher, and a Caspian Tern. 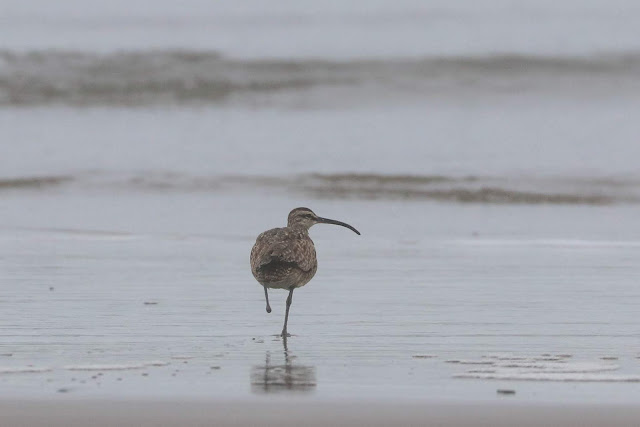 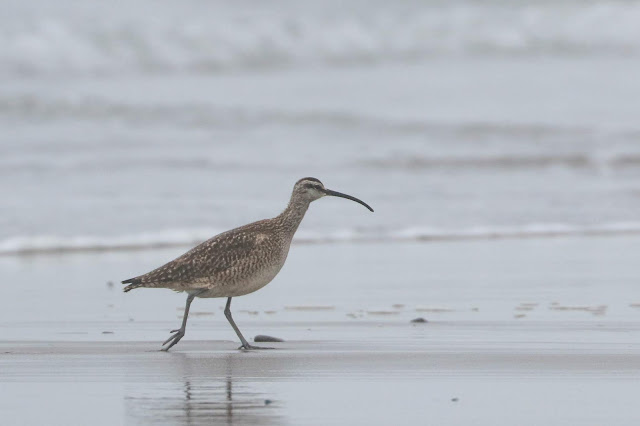 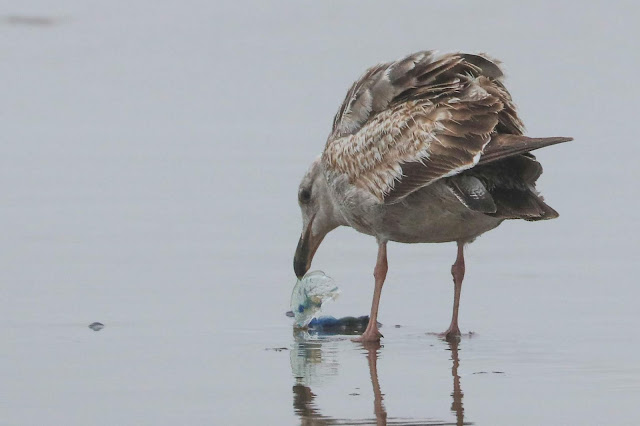 The other spot we've explored is Friends of Wildwoods Open Space, a 41-acre forest that backs up to our backyard.  Lincoln City has worked hard to protect a number of undeveloped areas that they have declared Open Spaces, which only makes me love this place more. 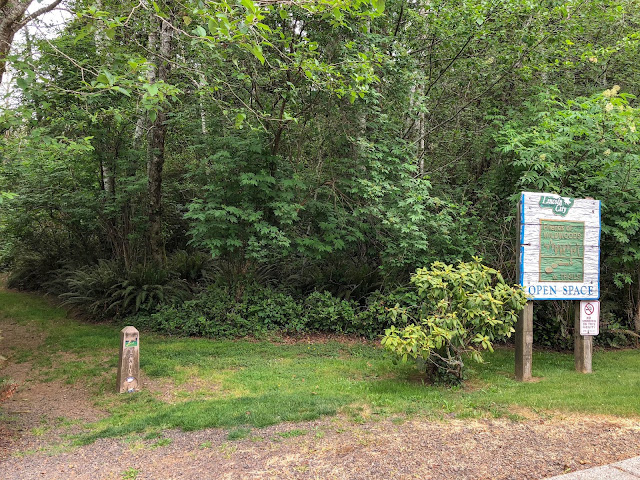 This is one of the smaller Open Spaces but there's a nice trail through the area and it was birdy enough for sure. 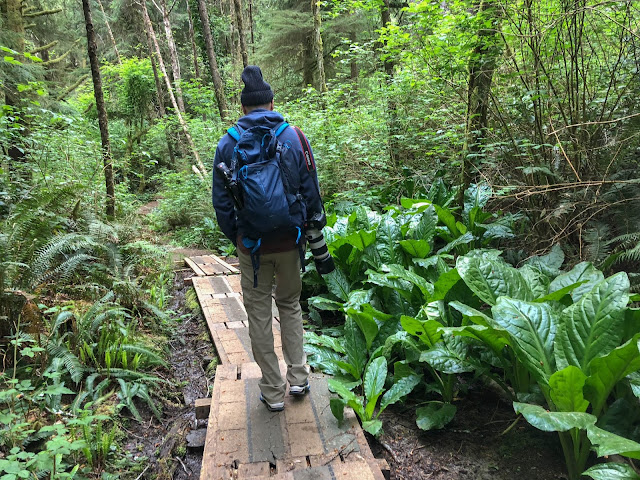 At one point we heard the jays, crows and a raven all very upset and Jacob spotted the source of the rage: 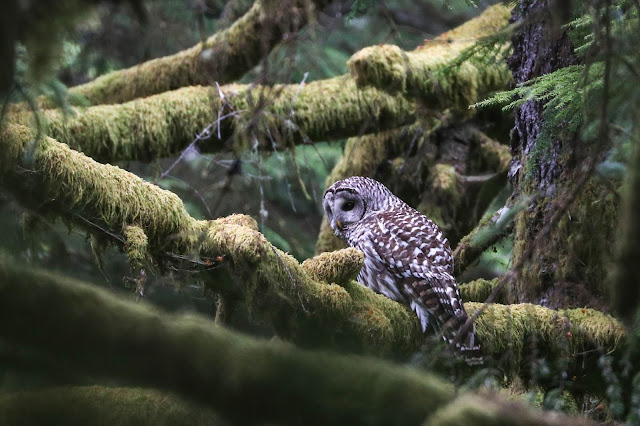 Barred Owl!  Nothing else unusual on the trail but some solid forest birding!  We made it a hotspot and saw that Lincoln City Audubon even led a bird walk there recently.

That's it from this month in Lincoln City.  There is SO much more to explore there which I am very excited about.  Good times!! 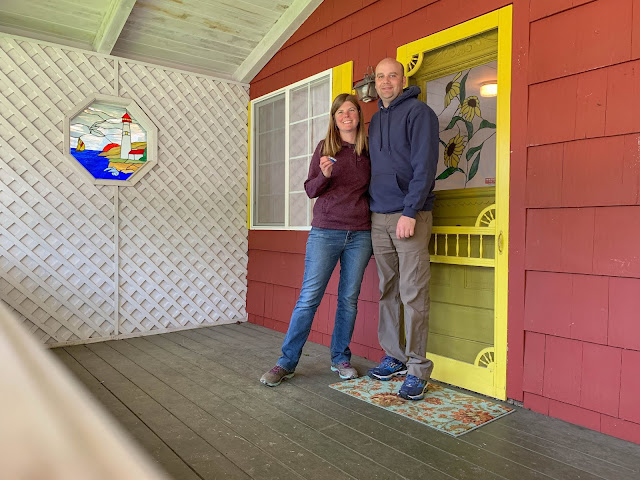