Back in December when a birder mentioned one of their goals for 2019 was filling in the gaps in eBird bar charts for their local hotspots it really stuck with me.  It's been a focus for me this year and I've filled in quite a few for the places I value most in my 5MR.  For example, here's how the bar charts looked at my patch, Meadowbrook Marsh, before 2019:

The gray bars represent weeks without complete checklists.  After 6 months of only birding the gray weeks it looks like this:

Yesss.  This pleases me.

As you can see, July is the grayest month, and not just at my patch but at other local hotspots also.   Marine Park, which is the best hotspot in my 5MR based on number of species seen there, had not been birded much outside of winter.  Here is how it looked pre-2019: 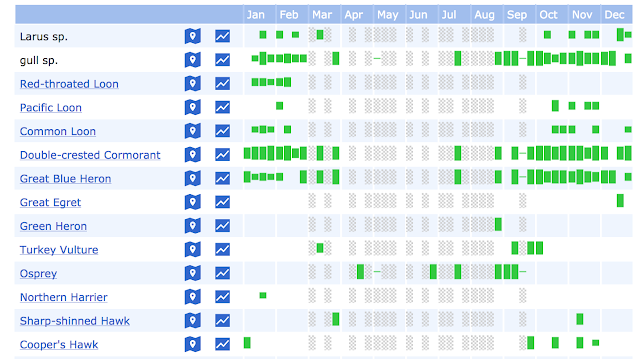 And after birding it hard all spring and finding more breeding birds than anywhere else in my 5MR:

Progress!  There's more to Marine Park than just winter ducks and gulls.  Filling in these gaps is ridiculously satisfying to me though maybe it doesn't really matter.  I don't know.

The last couple of weeks my birding has continued to focus on bar charts and now I will share some findings. 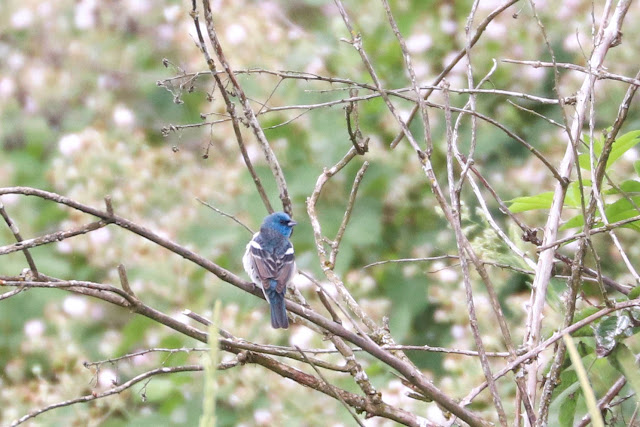 Lazuli Buntings have proven to be semi-reliable at the fields by Wal-mart (aka Burnt Bridge Creek at NE 147th Ave).  Happy to have them as likely 5MR breeders.

Columbia Springs Fish Hatchery is not the birdiest spot but still worth a regular visit.  Last year I saw a Cooper's Hawk with a freshly killed kingfisher by the main pond so fingers crossed this year's crop fare better. 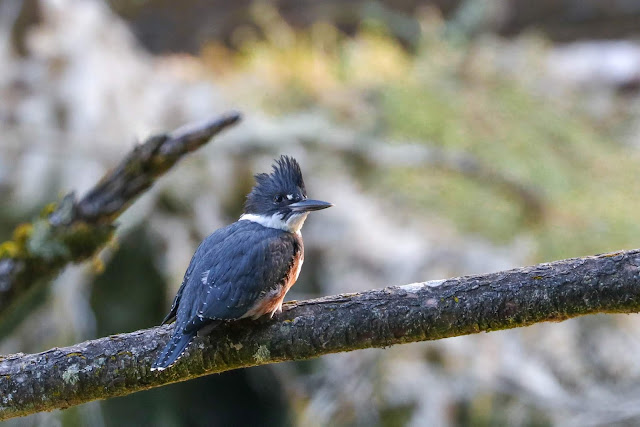 On this day Biddle Lake had been drained, creating some small moving channels with lots of mud and grossness.  Looked like great potential for shorebirds, but this week I saw it had already been refilled. 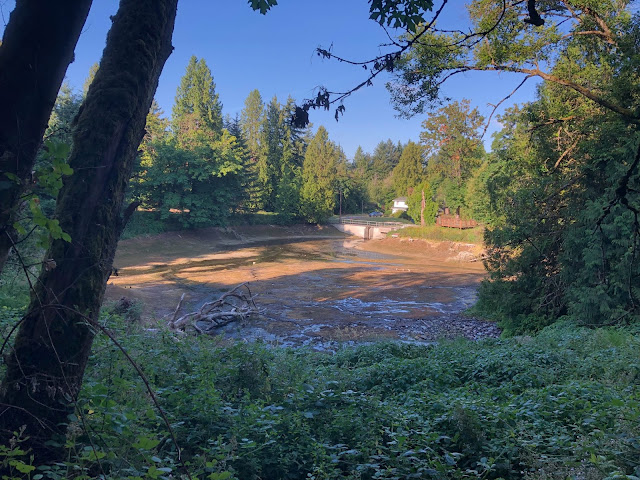 Down the road from the fish hatchery is a pond that I made a hotspot.  On that morning it was even birdier and I added some new species for the patch, including a super random White-breasted Nuthatch. 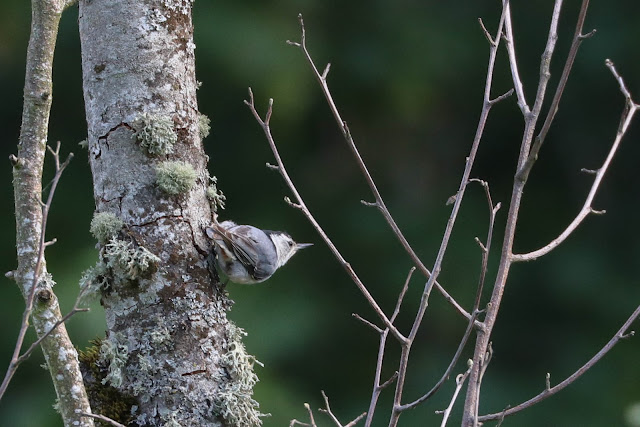 Along the road were a bunch of young Steller's Jays while across the pond a young California Scrub-Jay begged for food. 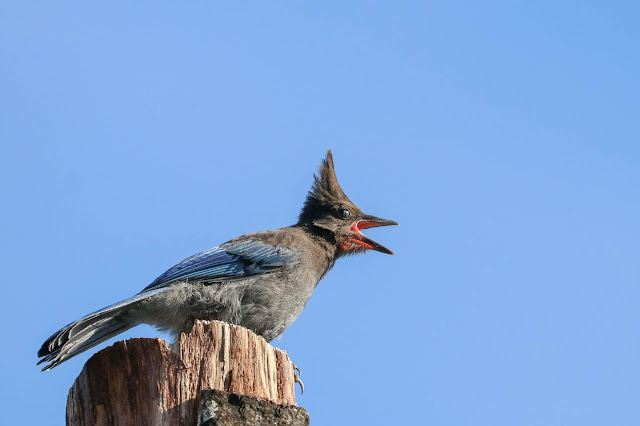 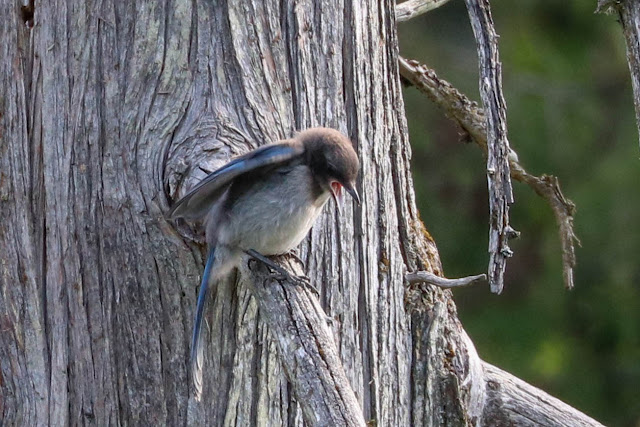 Last week Wintler Park needed a checklist so I birded both Wintler and Marine.  Turned out to be very birdy, starting with a Purple Martin. 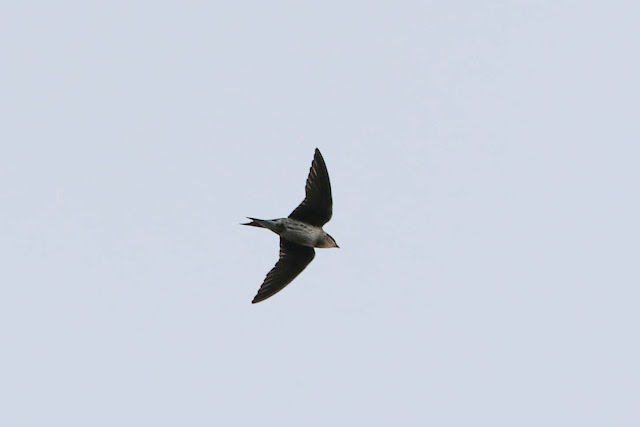 A few gulls were hanging out that I think were all California Gulls. 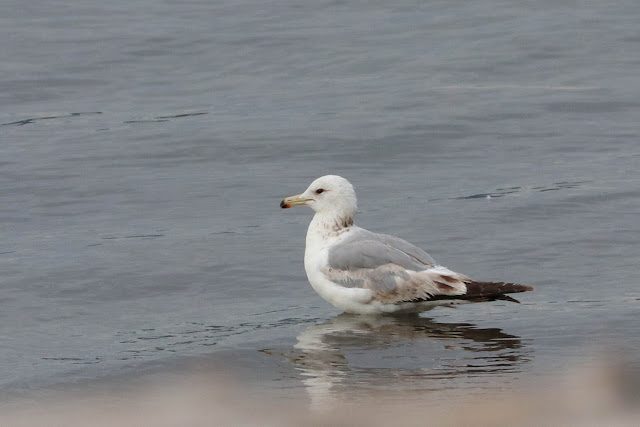 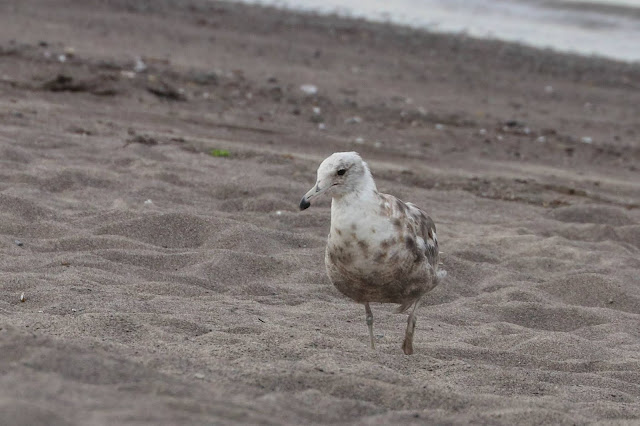 There were a few Common Mergansers chilling on a log by the river.  It seems most leave to breed elsewhere, so I'm guessing these ones are the nonbreeding smart ones? 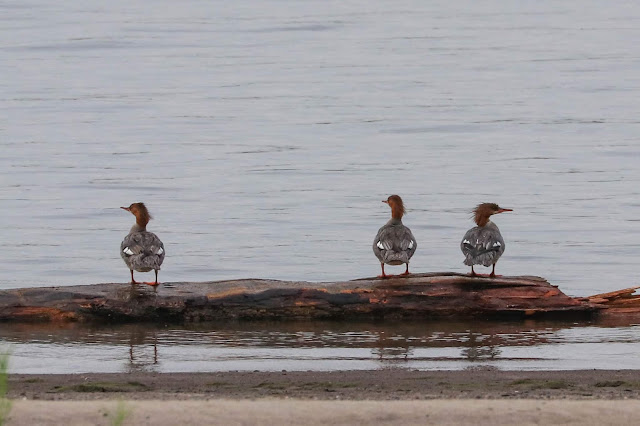 In the Tidewater Cove Marina there was the usual Killdeer but also a bonus shorebird, a Least Sandpiper.  This could be my first southbound fall migrant for the year. 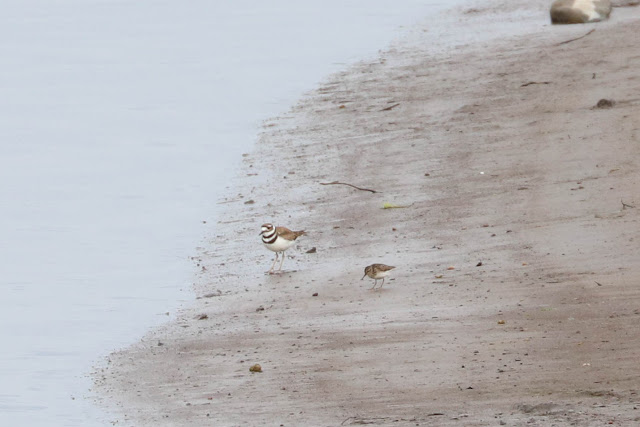 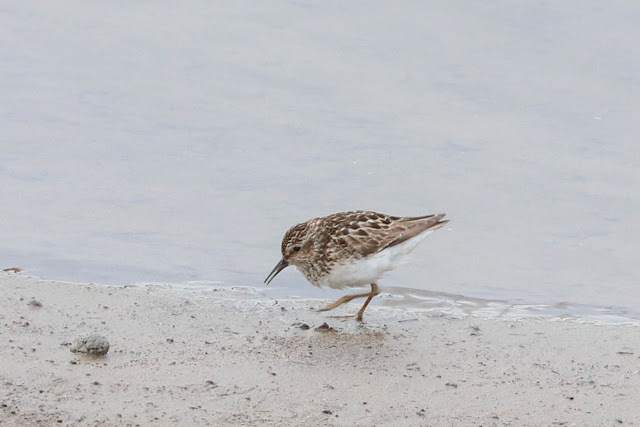 I walked down to the beach access at Marine Park and found two Common Mergansers on the water, possibly two from the earlier group. 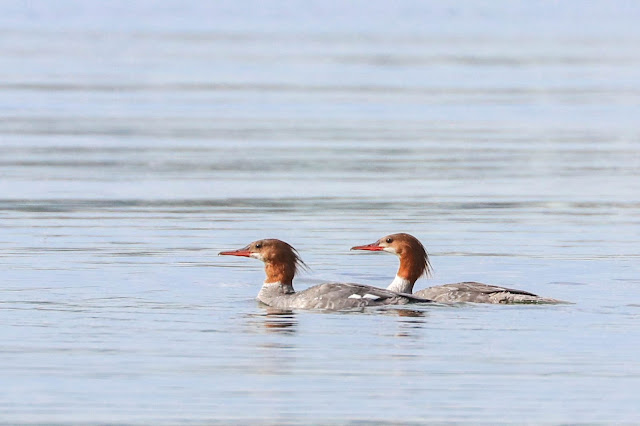 I was also very excited to have three Caspian Terns fly by, new for my 5MR this year! 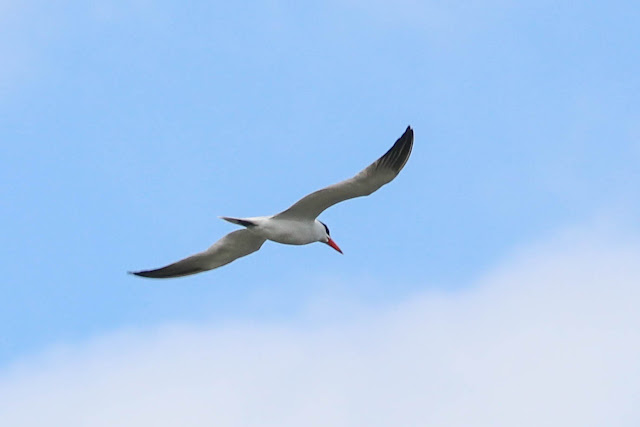 Last year I never even saw one in the county.

On the walk back I had a young awkward towhee and a possible robin nest. 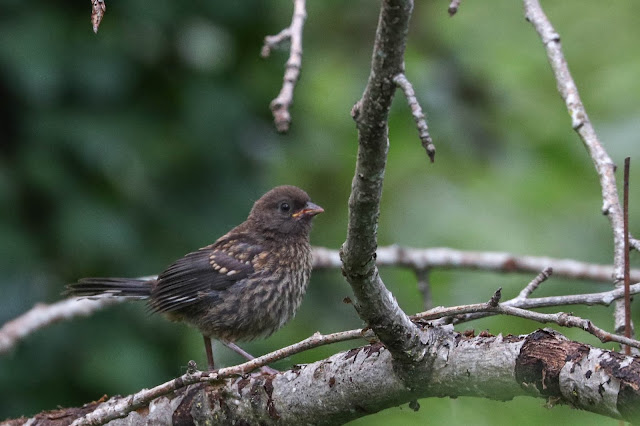 The nest was lower than eye level and maybe 15 feet from the main bike path. 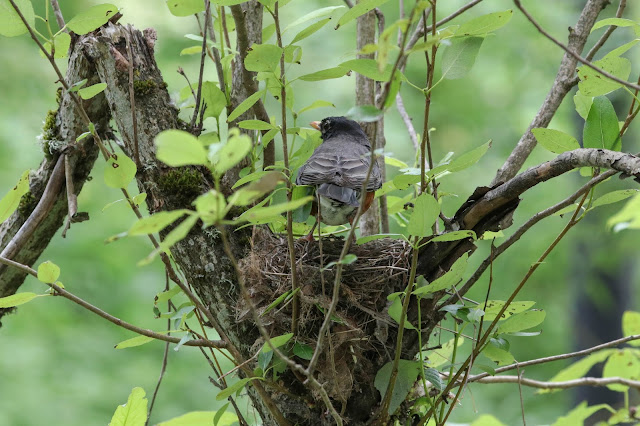 When I returned this week I was able to verify it was an active nest with three young robins inside. 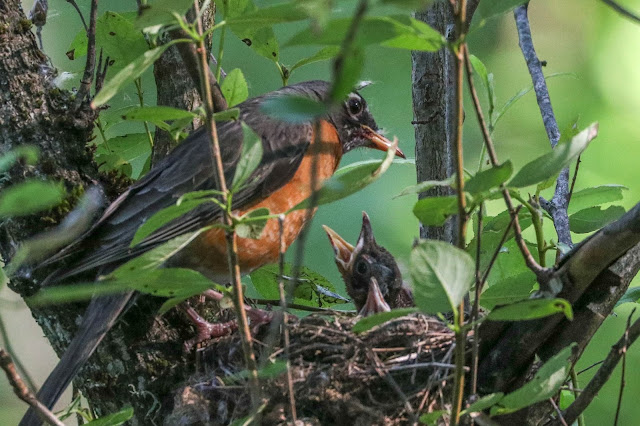 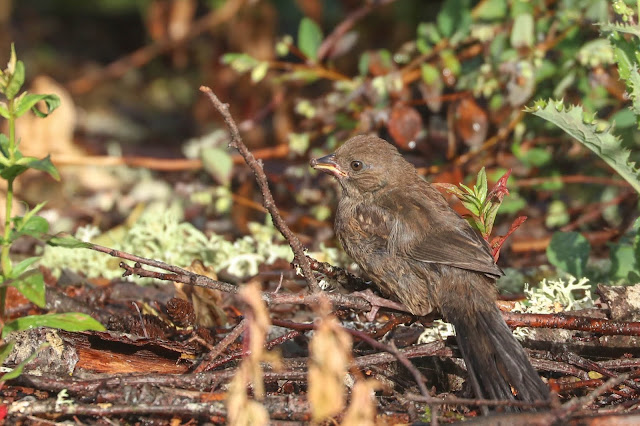 And because they are cute, these two chickadees that were preening together: 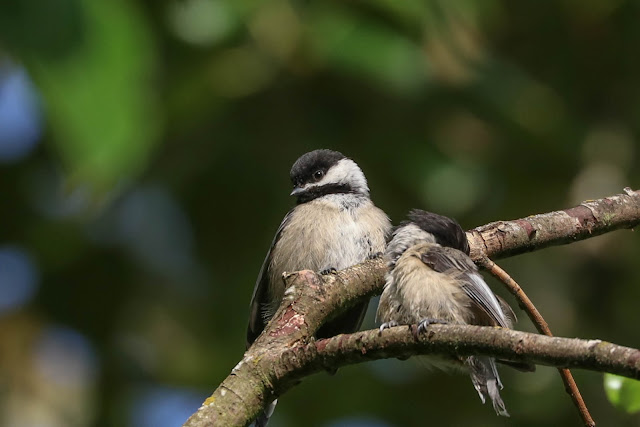 The Red-tailed Hawk family there was lined up on a BPA tower talking loudly.  This youngster seemed upset about dropping some perfectly good food. 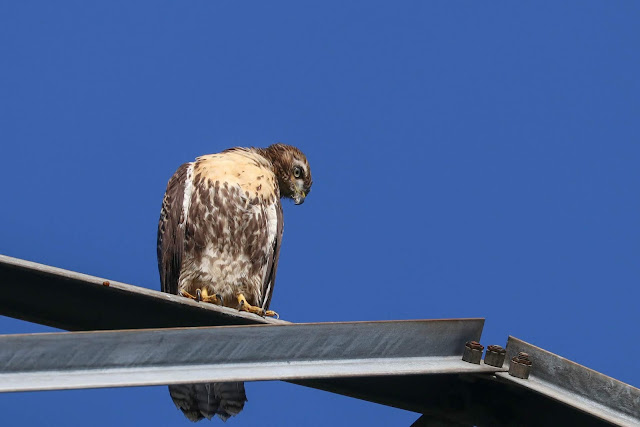 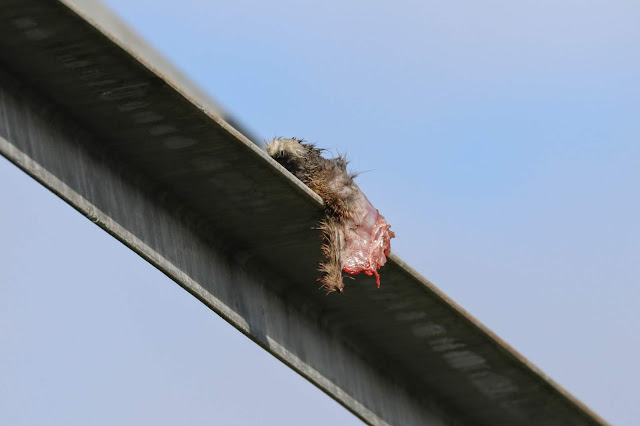 There have been some interesting sounds at my patch lately also, like this one that stopped me in my tracks as it sounded like a poorwill at first.  I think I decided it was a robin (?) but I'm willing to be convinced otherwise.

Yesterday I heard another strange one and finally found what I think was the source, a Purple Finch.