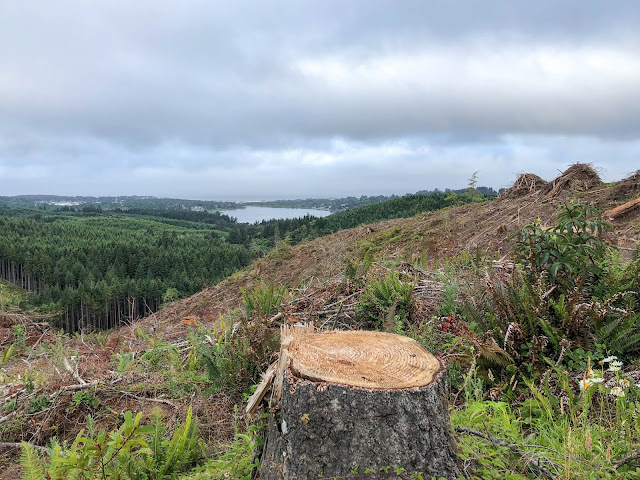 Prior to buying our house in Lincoln City I had not spent any time in clearcuts of coastal Lincoln County.  I had not actually given them much thought until one of this year's 5MR challenge participants started posting about the birds he sees in one such clearcut.  Across the lake from our new house is a big patch of clearcuts which I finally went up to explore last weekend. 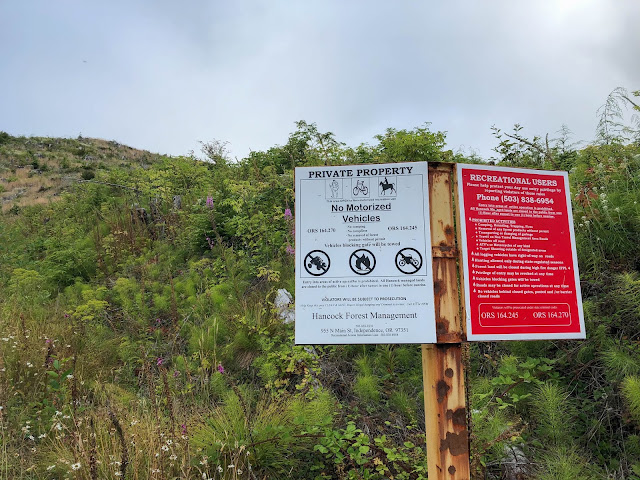 There are a number of gates along NF-1726 so I just picked a random one and started hiking up the logging road. 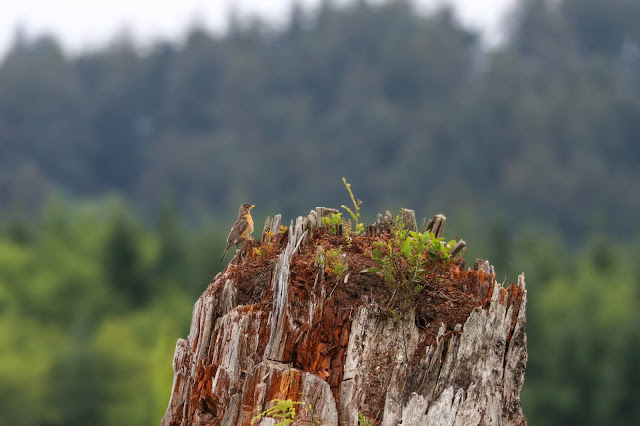 It was fairly birdy with the most abundant birds being families of White-crowned Sparrows and Dark-eyed Juncos, with a sprinkling of other randoms mixed in. 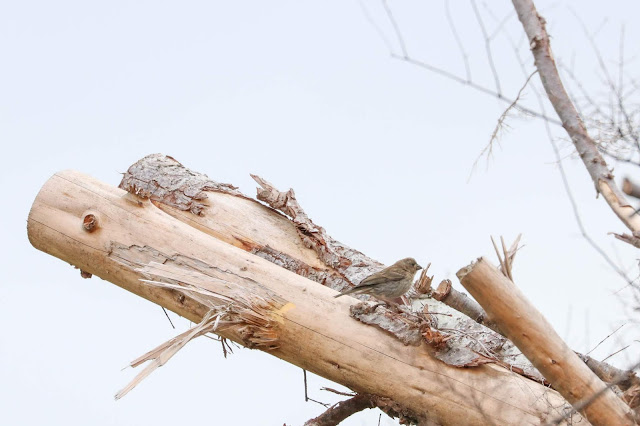 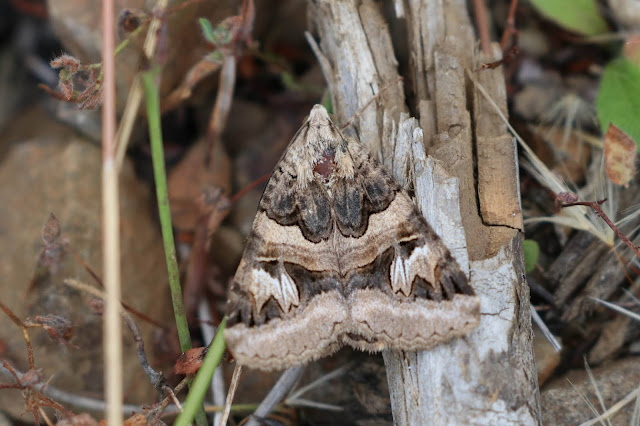 Moth to be identified 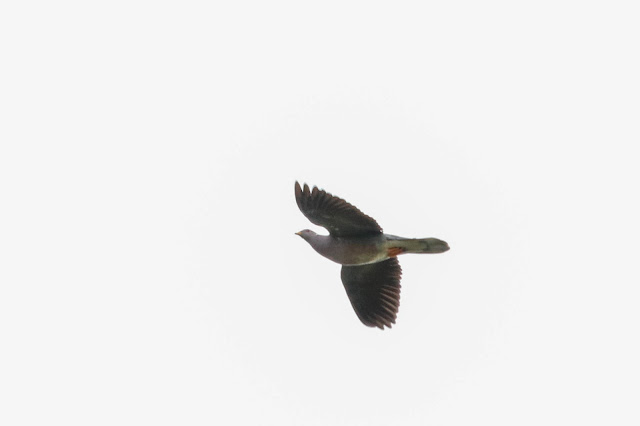 I followed all the dead-ends till the final dead end at the top which was probably less than a mile from the gate.  It felt high up but when I checked the elevation I was barely over 500 feet. 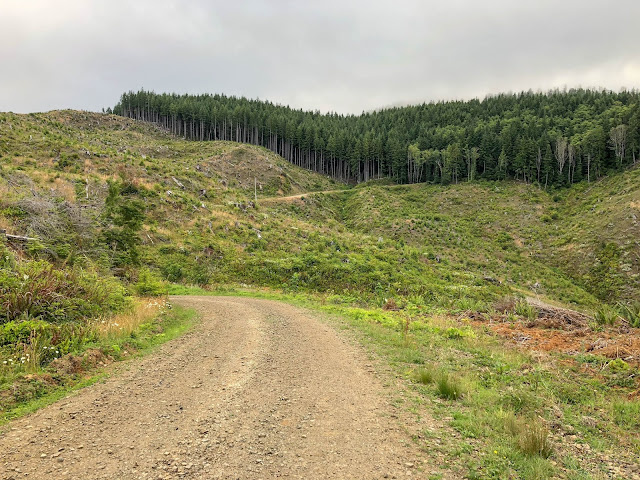 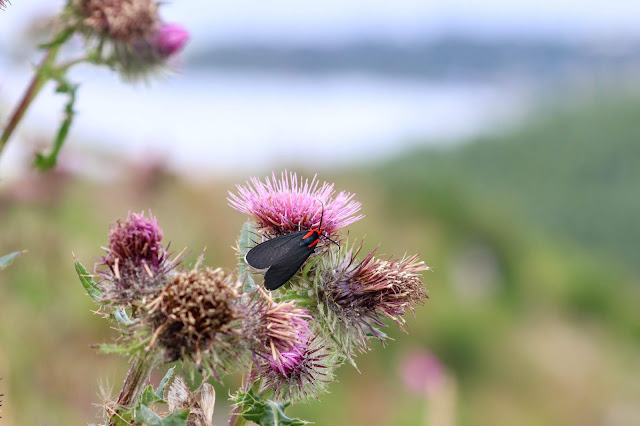 On the walk back down I stopped for awhile to watch the swallows zipping by my head and noticed a couple were landing on a stick below me. 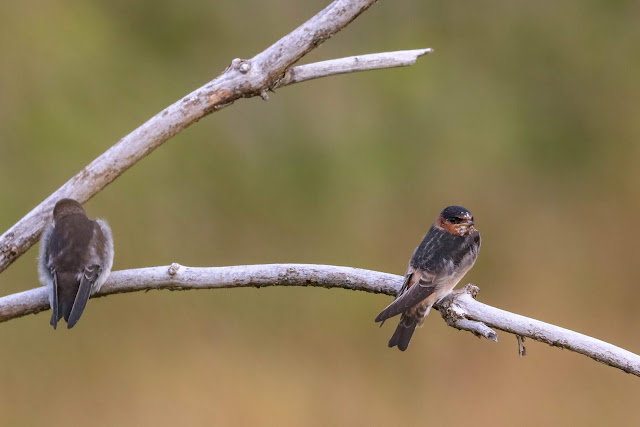 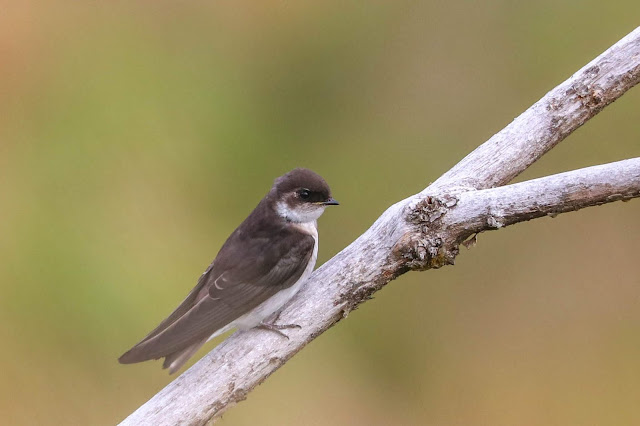 Violet-green (I think? based mostly on wingtips extending beyond tail) and Cliff Swallows

There were a lot of combos on this hillside including Cliff Swallow and Dark-eyed Junco: 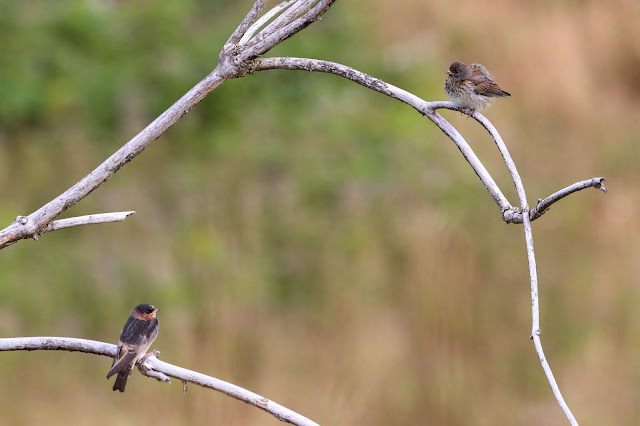 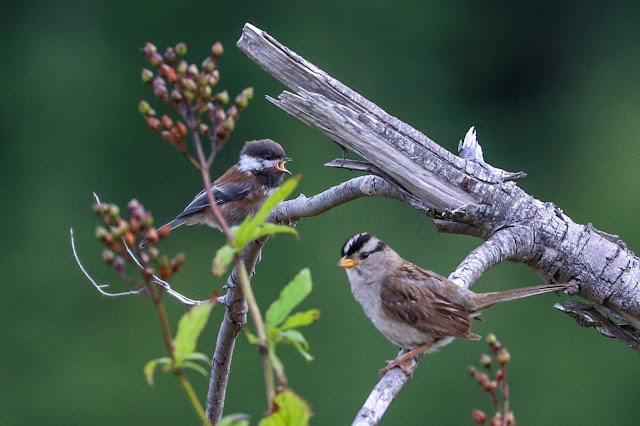 And the one that dispersed too quickly for a photo:  Chestnut-backed Chickadee, Wilson's Warbler, and American Goldfinch all on one branch. 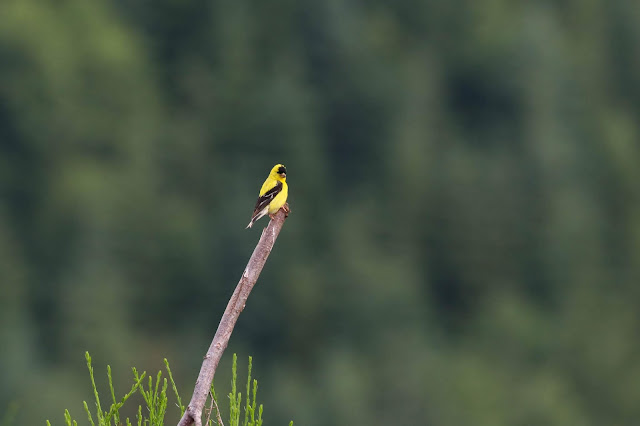 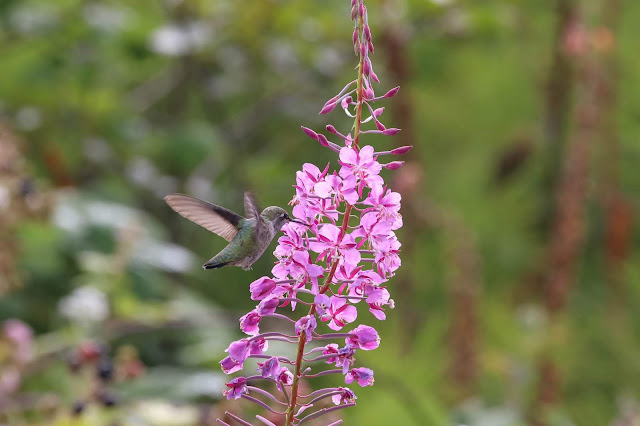 I had 32 species on this little hike including my Lincoln County Olive-sided Flycatcher, House Wren, and Western Tanager.  I have high hopes for this area during migration!

That evening Jacob arrived and I suggested we check out another clearcut after dinner.  This time we had nighthawks in mind.  We chose the gate across the road from where I had hiked that morning and set off. 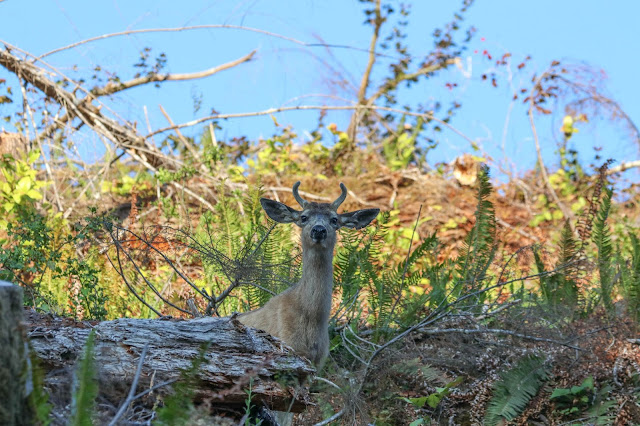 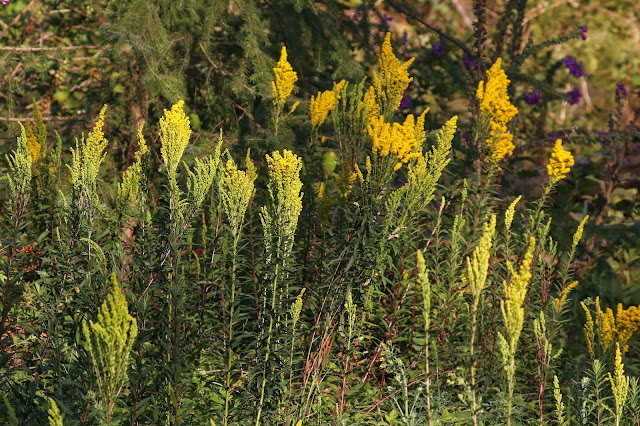 I heart goldenrod too.

As we hiked uphill we caught views of two Olive-sided Flycatchers, one sharing a thin tree with a Hairy Woodpecker. 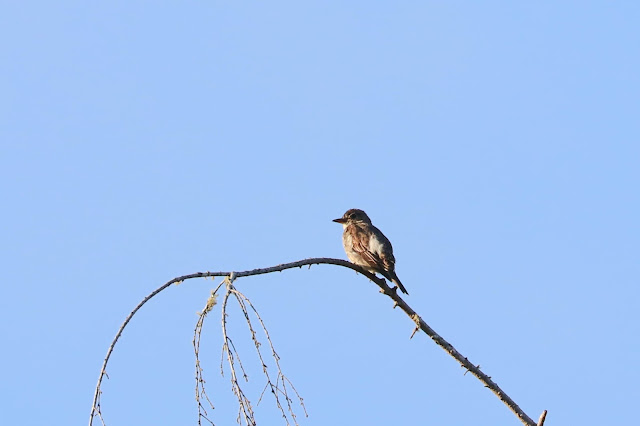 At 7:40 Jacob looked up and said the magic word, "nighthawk!"  It took a few seconds before I heard it also and then we were stoked.  It cruised overhead but seemed to keep on going. 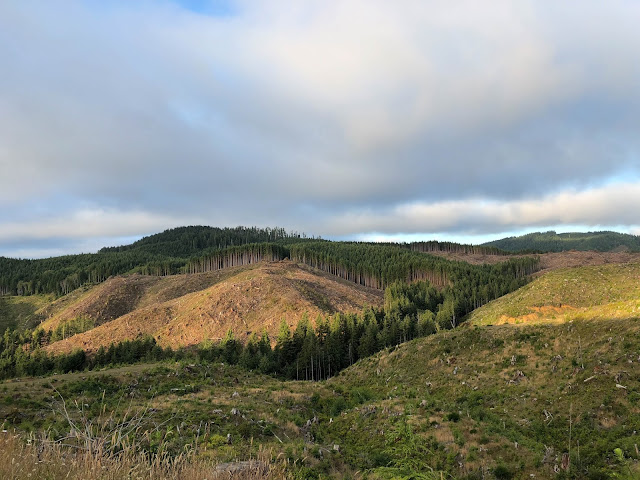 We continued uphill and found this fun snake which I think is a northwestern garter snake. 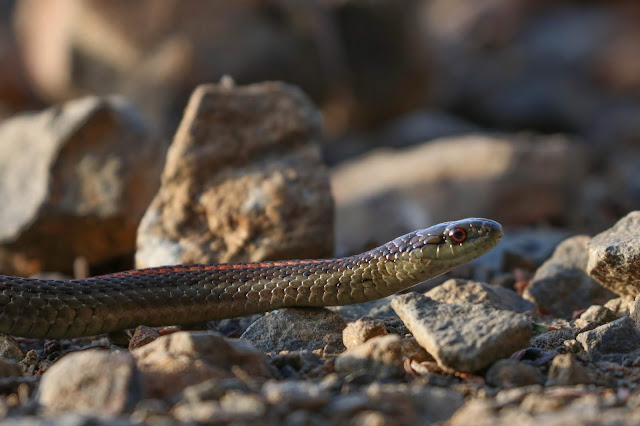 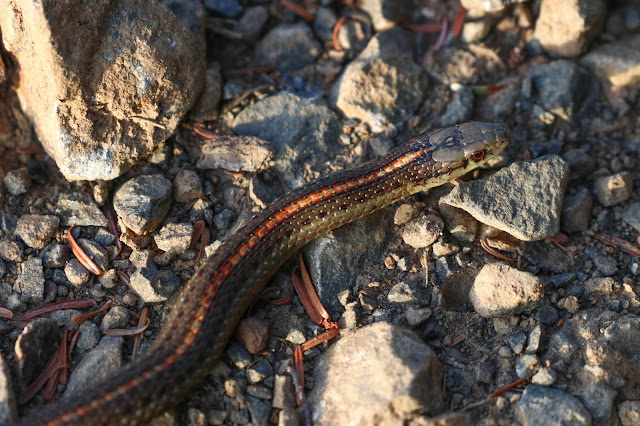 Another nighthawk appeared, then another, and another.  The next hour and a half was a full on nighthawk party. 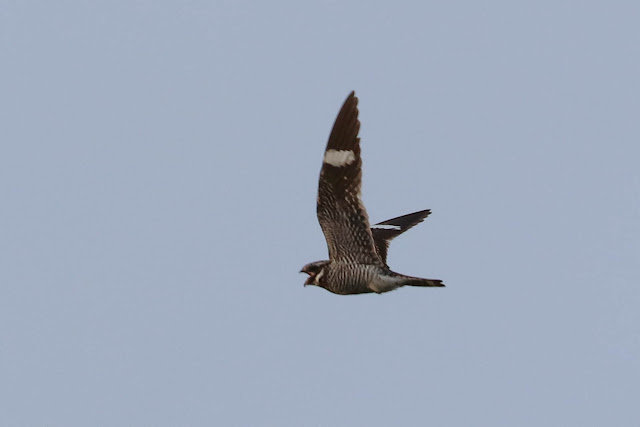 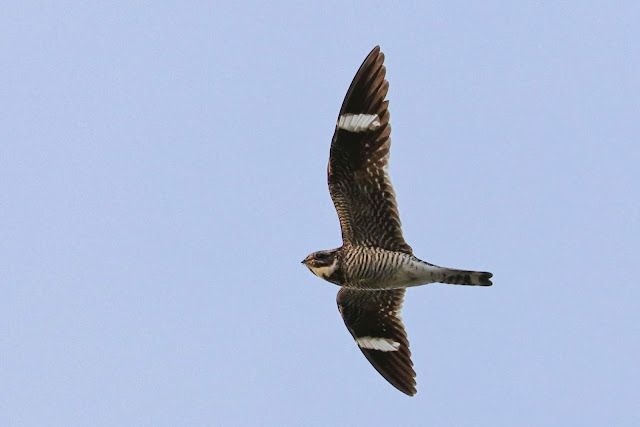 Often two or three or even four were flying around together, with the most we had at one time being six.  eBird did not approve of six. 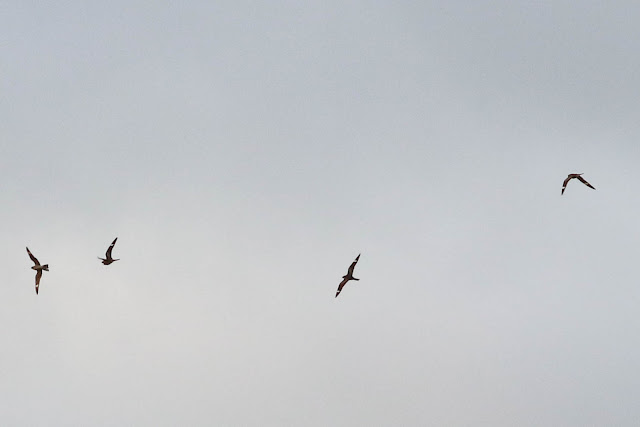 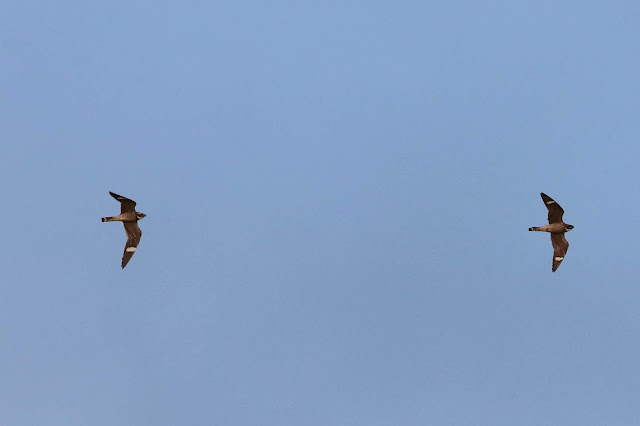 We found a ridge that they seemed to be using as a place to soar effortlessly in the wind and they came within feet of us.  It was one of my favorite nighthawk experiences ever. 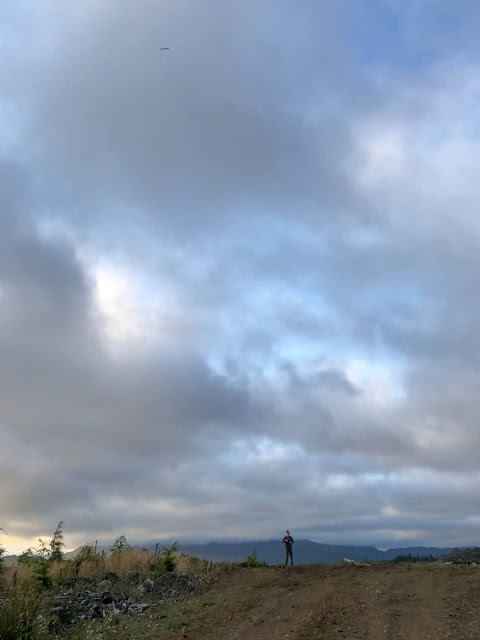 Clouds rolled in as the sun was setting. 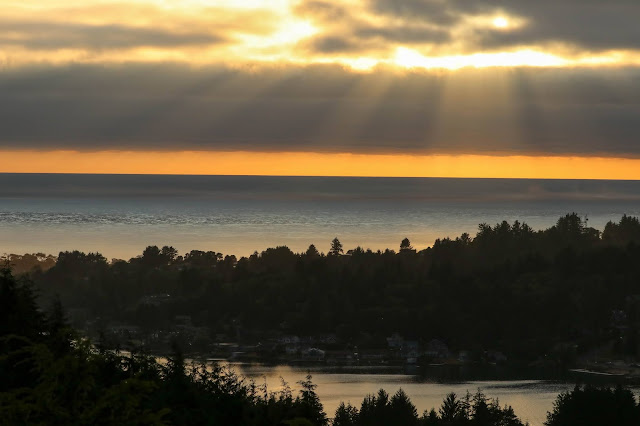 I was hoping for a nighthawk-ocean combo but wasn't sure it was going to happen.  But then it did, during the lovely sunset. 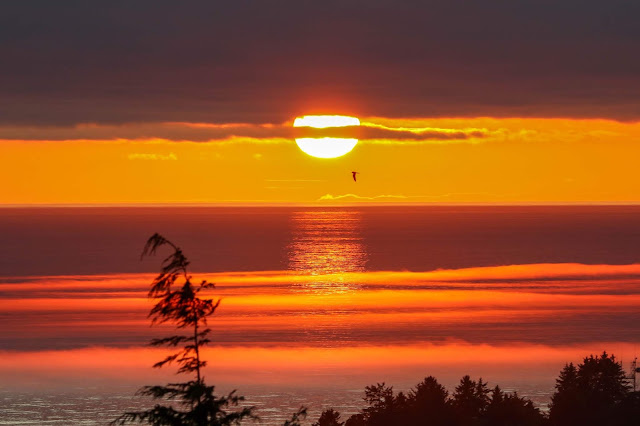 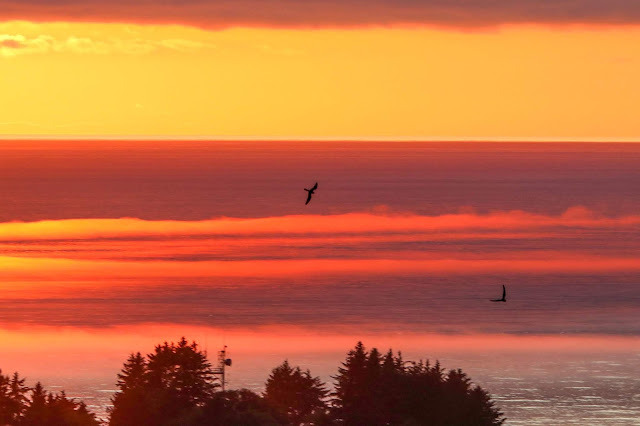 On the walk back to the car a few bats came out and I failed miserably getting a photo of one, but here is a terrible video to make up for it.  Nighthawks still peenting in the background.