on January 22, 2020
On Monday Jacob and I decided at the last minute to take a trip out to Sherman County to continue my project of (e)birding the less birded areas of Oregon this year. 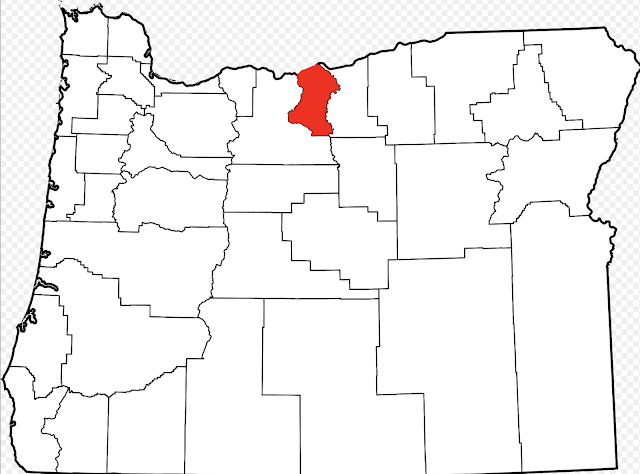 I planned out a birding route during the drive using my handy print out of birding sites in the area from the ECAS website.  We skipped the top hotspot in the county, Deschutes River State Recreation Area, and headed to Fulton Canyon. 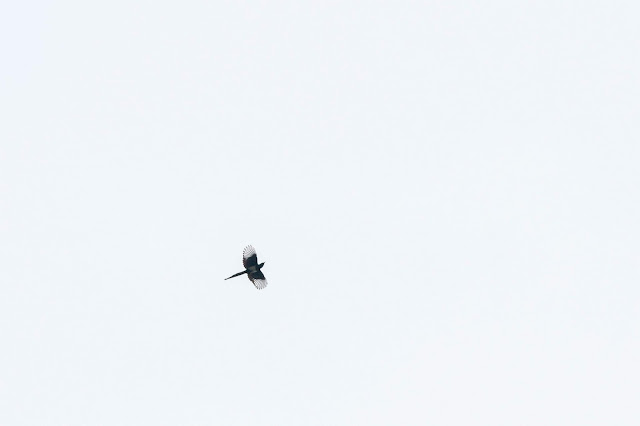 This road did not prove particularly birdy but 5 out of our 8 species were new for the "hotspot."  We turned left on Welk Road which was mentioned in the site guide as having rolling hills and riparian areas.  Indeed.  The weirdest thing here was probably the tree full of Ring-necked Pheasants. 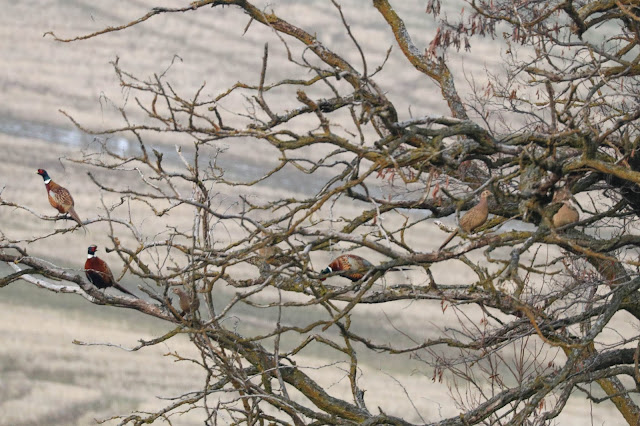 This is not how I typically encounter pheasants.  The site guide mentioned this road as having had Say's Phoebes in the past though I was not expecting one in January.  But there it was. 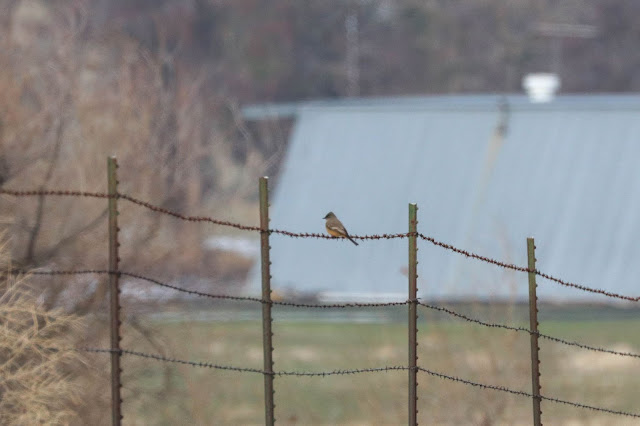 The phoebe disappeared soon after but reappeared with a shrike hot on its tail.  Then they both disappeared.  As the road approaches the town of Biggs there are excellent views, though a bit hazy on this day. 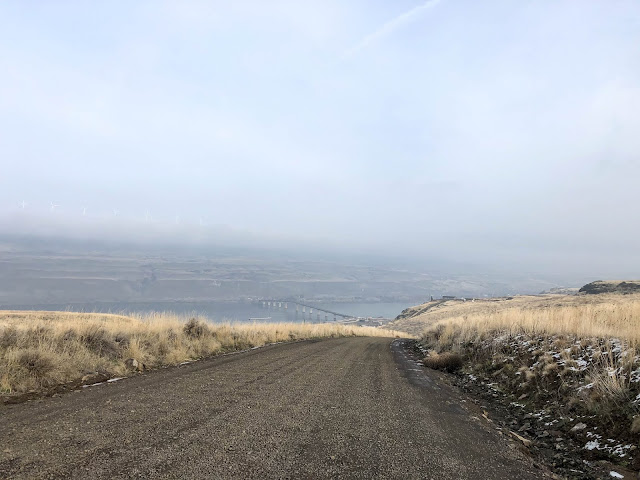 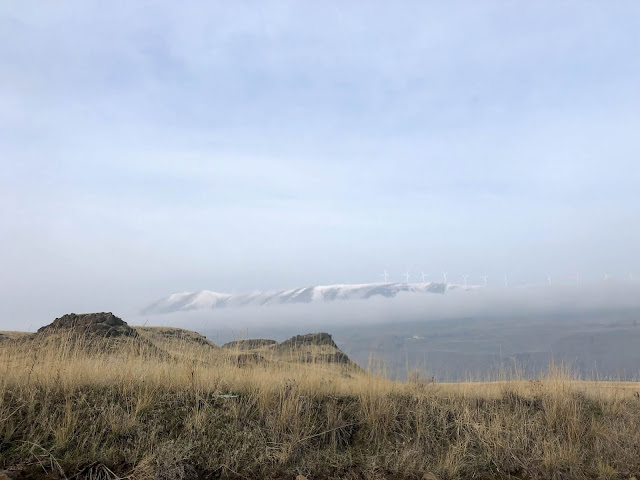 These grassy hillsides were holding lots of birds we could not quite see.  I pished and out popped at least 40 White-crowned Sparrows. 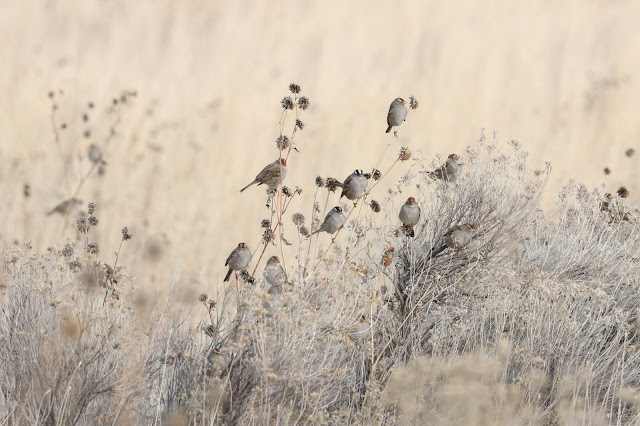 On the opposite side of the road some American Goldfinches were feeding on seed heads. 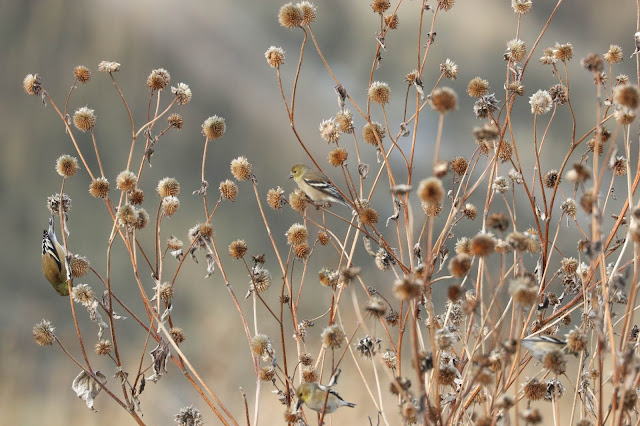 Sherman County only has 18 hotspots in eBird so I suggested Welk Road as one. 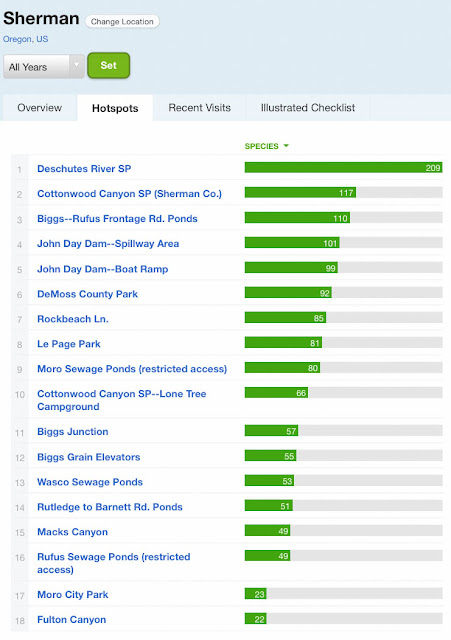 Welk Road leads down to the frontage road between the towns of Biggs and Rufus, which as you can see is the number 3 hotspot in the county.  I imagine this is partially because it's close to I-84.

We drove the road to Rufus hoping for good ducks in the ponds but they were mostly frozen over. 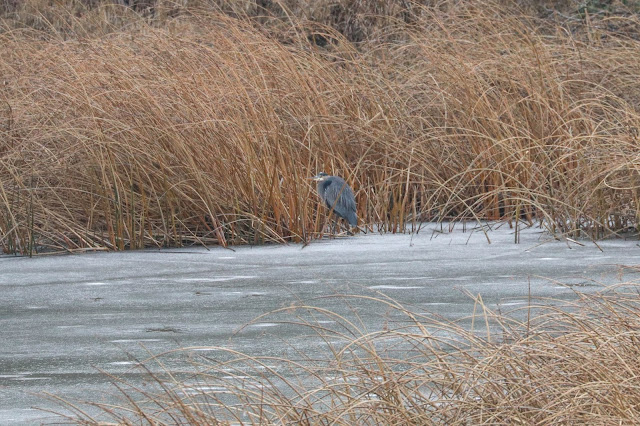 The road dead-ends a little bit past town and there we found my first county birds of the day, a covey of California Quail. 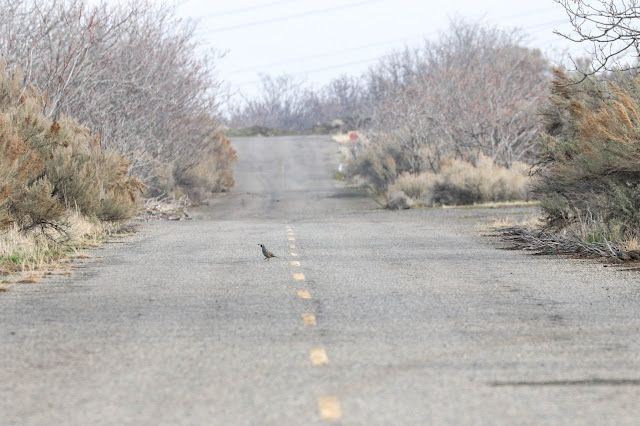 Last one to hide

From here we drove north under the highway and east to the John Day Dam.  At the boat launch area a bunch of Cedar Waxwings were being conspicuous but we could not turn any into Bohemians. 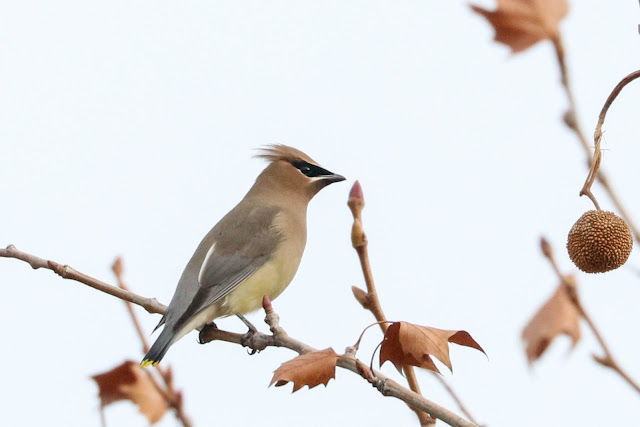 Also around were a Yellow-rumped Warbler and a couple Red-breasted Nuthatches.  Here is a terrible combo shot: 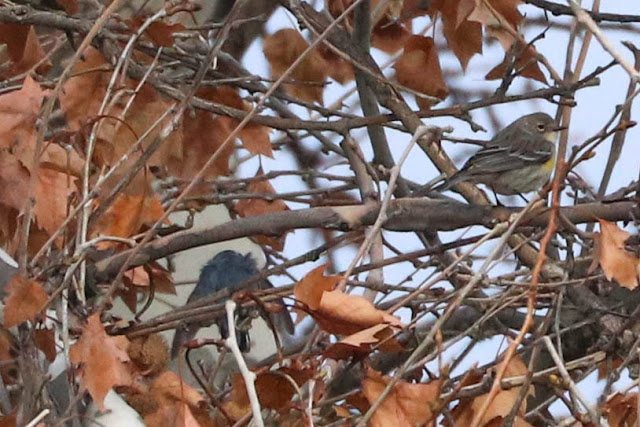 At the actual boat ramp a gull landed that appears to be a pure Western. 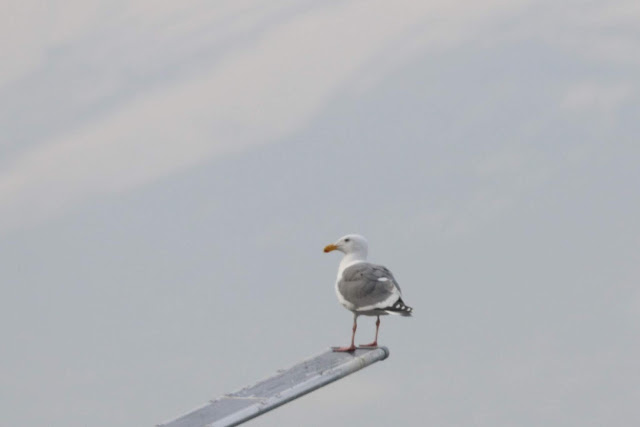 At the dam spillway we found the five American White Pelicans that are wintering there along with a pair of Barrow's Goldeneyes, some Canada Geese, and of course tons of cormorants. 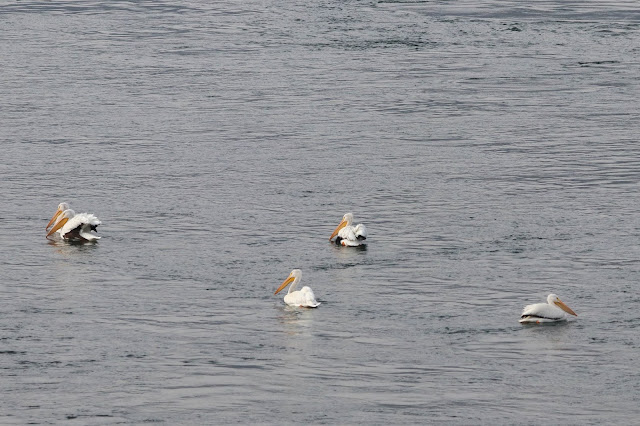 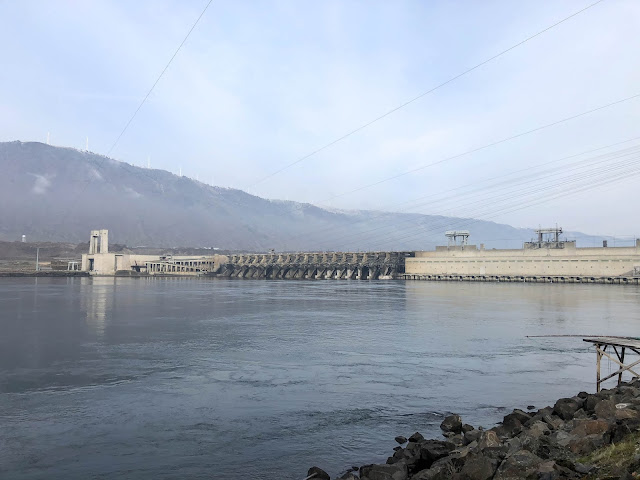 From here we drove back along the river to the Rufus Treaty Fishing Access Site on Rockbeach Lane, stopping when we came upon a ton of ducks.  As I was getting the scope set up Jacob called out a Eurasian Wigeon. 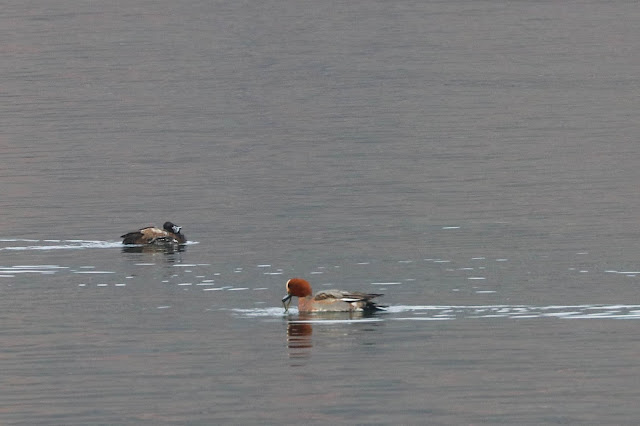 I shot him down, telling him it was a hybrid because the sides weren't clean grey.  But then I sent it to Seagull Steve who shot me down, saying no, it's just molting.  So yay!  This turned out to be only the 4th eBird record I could find in Sherman County.

We had been scoping the ducks for only a couple minutes when a little boat showed up and ducks started flying.  A group of Redheads was nice. 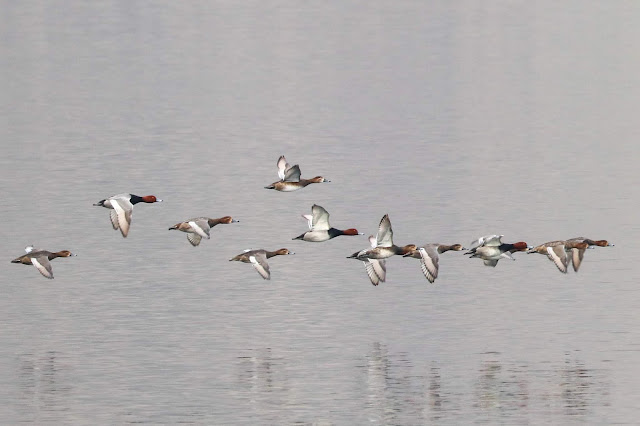 We drove to the end of the road where the lighting was terrible for scoping ducks. 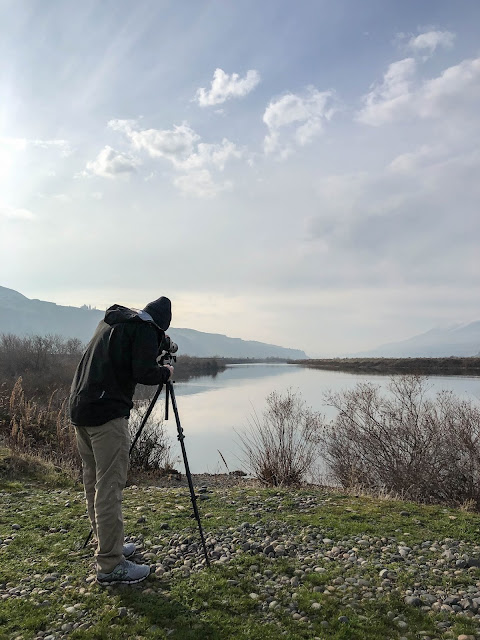 The lighting was just fine for looking at Killdeer though and we had at least six here, far too many for eBird's filter.

From here we drove through Rufus to explore Scott Canyon Road and the Wasco Sewage Ponds.  Scott Canyon was very quiet and the sewage ponds held only two Mallards and one Common Goldeneye.  Our final stop was DeMoss Park where I've been a few times as it has a bathroom. 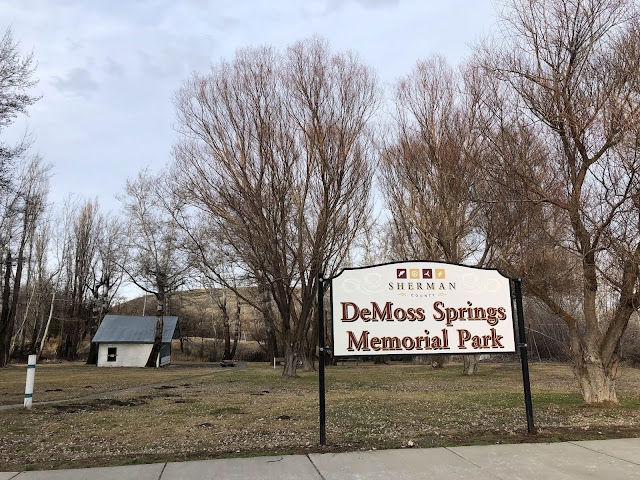 On this day there were maybe 80-100 Eurasian Collared-Doves hanging out by the grain elevators.  From there we headed home.

We ended the trip with 50 Sherman species for the day, six of which were new for me (18 new ones for Jacob).  This put us in a tie for second place in the county for the year which is funny.  We covered seven spots recommended by the ECAS site guide, most of which mentioned they needed more eBird data.  It was a really fun day in Oregon's third least birded county and I really look forward to more trips out there this year!  Good times!!!
Black-billed Magpie California Quail Cedar Waxwing Eurasian Wigeon Redhead Ring-necked Pheasant Say's Phoebe Western Gull White Pelican White-crowned Sparrow