A year ago this couch I'm sitting on did not exist, these walls surrounding me were not painted Valspar's Flood Tide, there were no blinds on the windows, no WiFi connecting me to the internet, and no food in the very white kitchen.  We may have had a couple outdoor metal chairs to sit in but it was not a place you wanted to relax and watch the birds out the window.

This has all changed, of course.  The house has become increasingly comfortable with the sunroom facing our backyard being our favorite place to sit and look for birds.  This last month with the quarantine yard birding challenge I've spent more time in the yard than ever before.  Birding but also working on my flower garden that will hopefully attract all kinds of insects (and therefore birds to eat the insects). 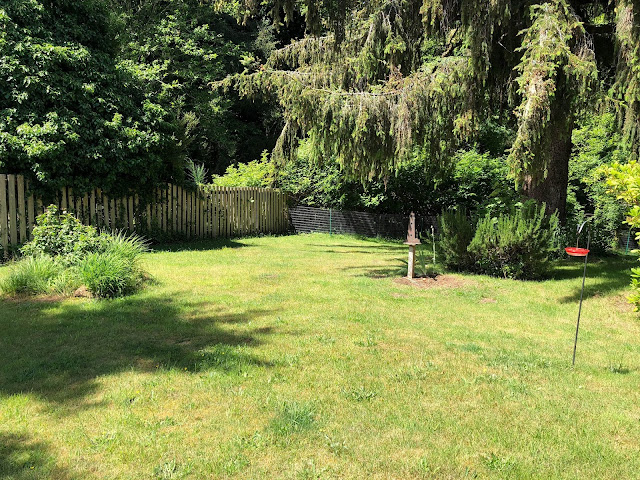 Above is how this garden started.  See that metal lighthouse on a post?  There was a dying hydrangea there and a few iris bulbs.  Last July I added a bunch of flowers from the local nursery so something would be blooming in the yard. 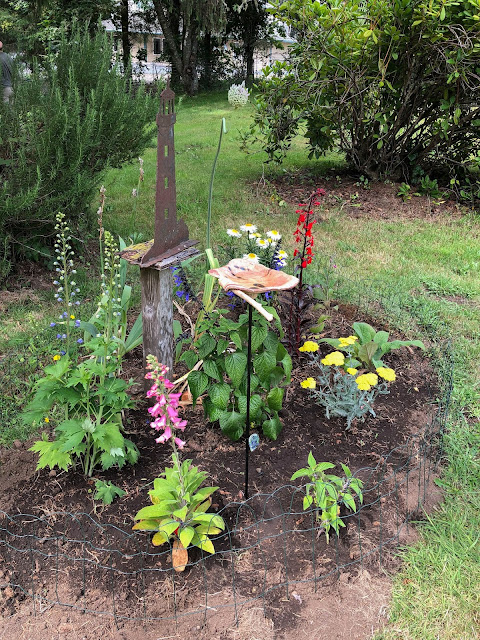 There were not many natives available there so I brought back some from Portland Nursery and Xera Plants later on. Here's how it looked over a week ago: 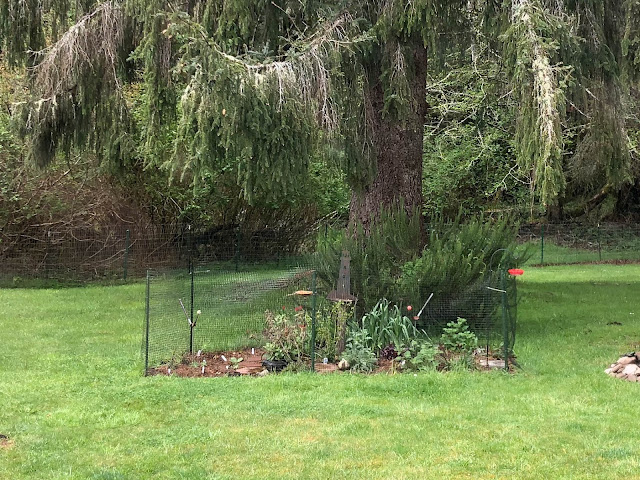 The native to non-native ratio was not what I wanted so I made my first trip to Echo Valley Natives and got to work making the garden quite a bit bigger. 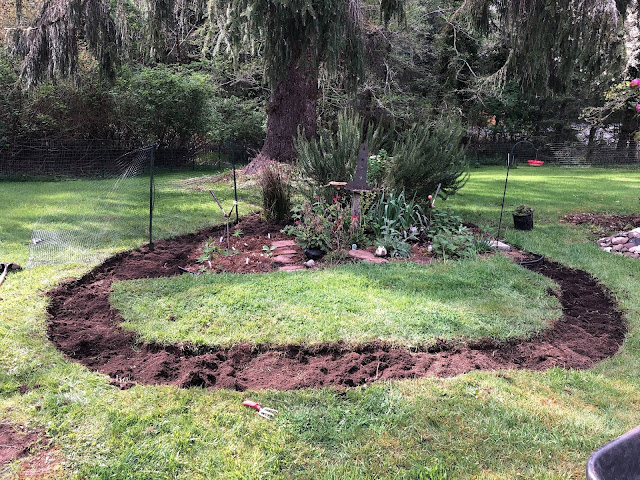 To jump back to birds for a minute, let me say that while I had been birding my yard all month I had not been birding it during those prime early morning hours.  But while I worked on this garden early one morning I realized I had been missing out.  A flock of migrants came through the back of the yard and the garden was forgotten for awhile. 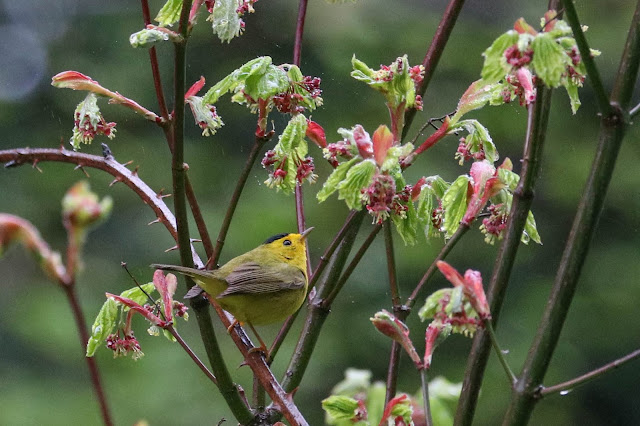 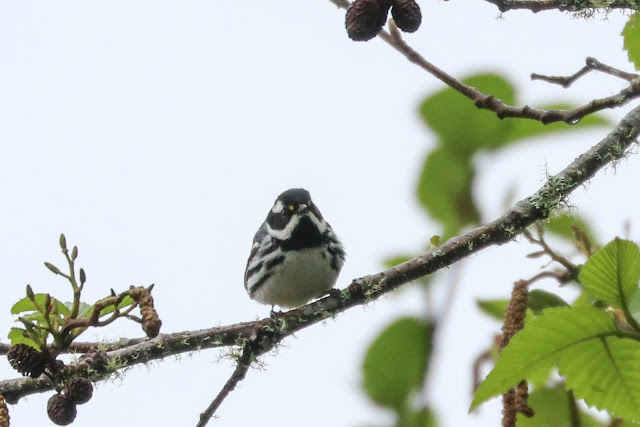 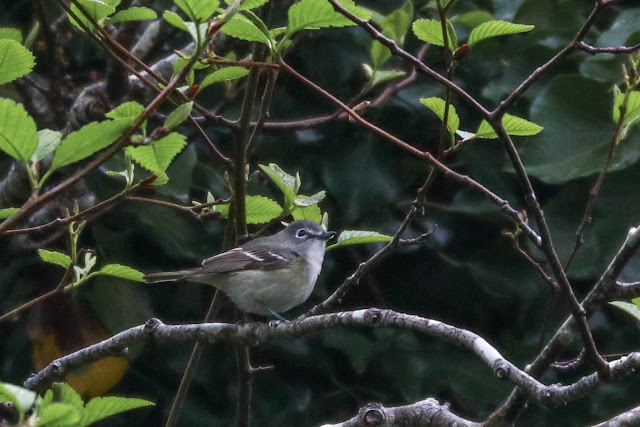 
It was the beginning of the last week of April and I was only just realizing I should be outside birding my yard, not sipping some coffee and watching the window before heading out elsewhere. 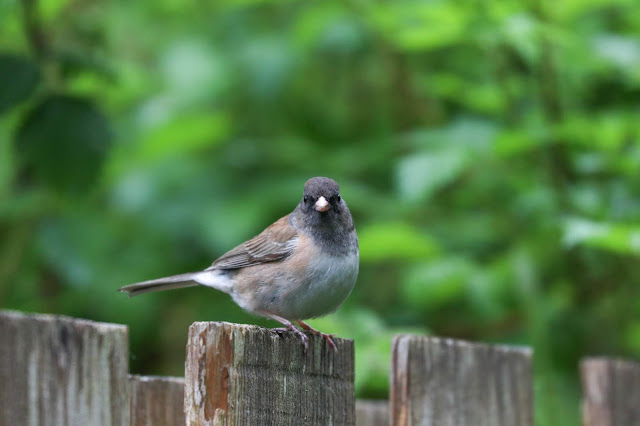 I finally finished digging out the grass for the rest of the garden and was excited to plant the new native flowers. 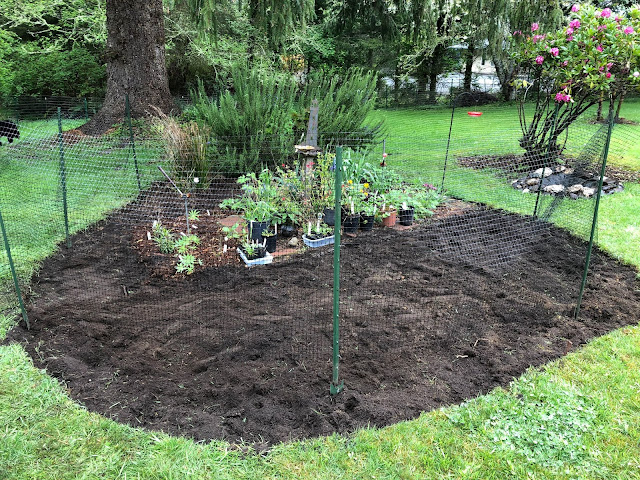 And after all the plants were planted and a million wheelbarrows of mulch added: 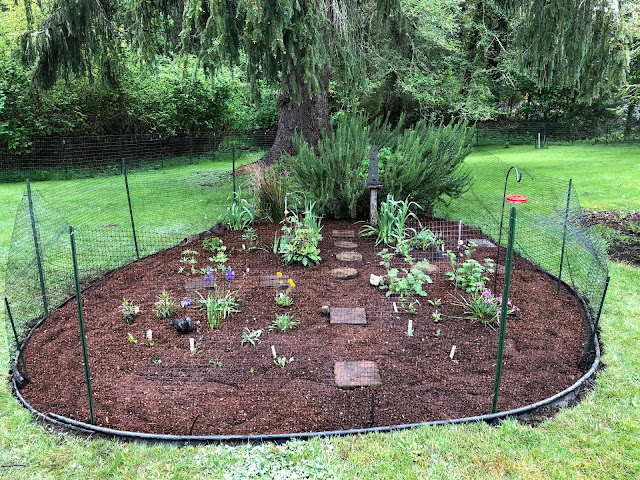 I ended up moving out a lot of the non-natives to another part of the yard so this garden is mostly natives now including :  two kinds of checkermallow, two kinds of camas, shooting stars, Willamette Valley gumweed, phacelia, Jacob's ladder, blanket flower, asters, two kinds of penstemon, wallflower, milkweed, lupine, meadowfoam, prairie smoke, and more.  Can't wait to see these plants fill in!

There was some kind of water feature in the front yard at some point that had become overgrown and filled in with dirt.  I decided to recreate it in the back to see if any birds would use it.  So far no takers. 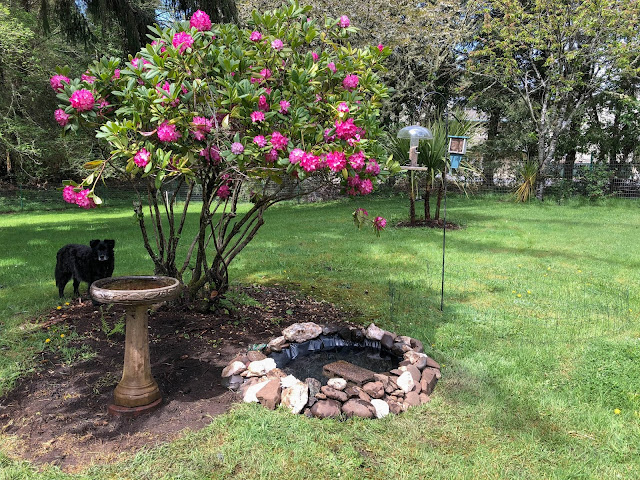 While I was doing this a couple Band-tailed Pigeons were flying between the back yard and the holly tree in the front. 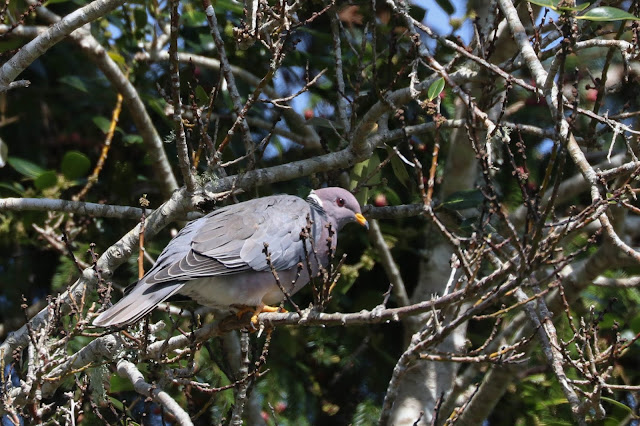 Then the real drama started.  A crow had flown into the trees in the back and a couple of robins were freaking out.  Clearly a nest had been discovered and the robins were fighting their hardest to keep the crow out of it.  They attacked that crow admirably but at one point the crow shot out, a blue egg in its bill.  It landed on a building nearby and slowly ate the egg's contents. 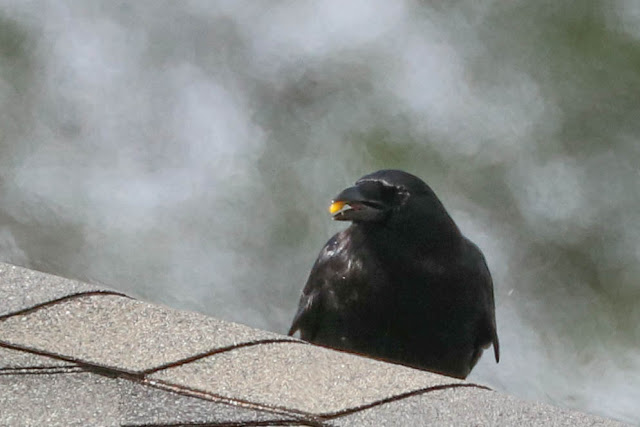 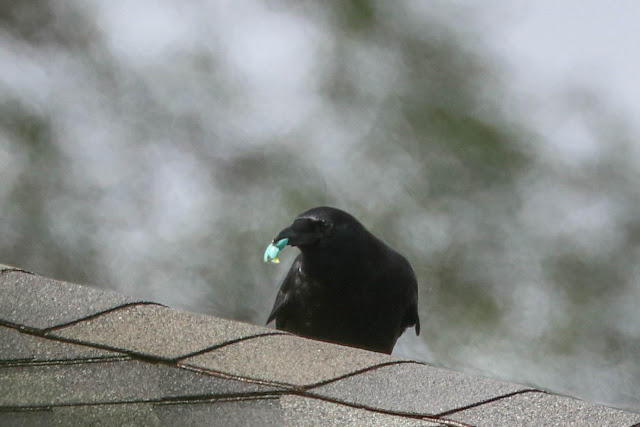 The crow made more attempts but never flew out with an egg again.

One afternoon I finally saw a Downy Woodpecker, a bird that I needed for the month. 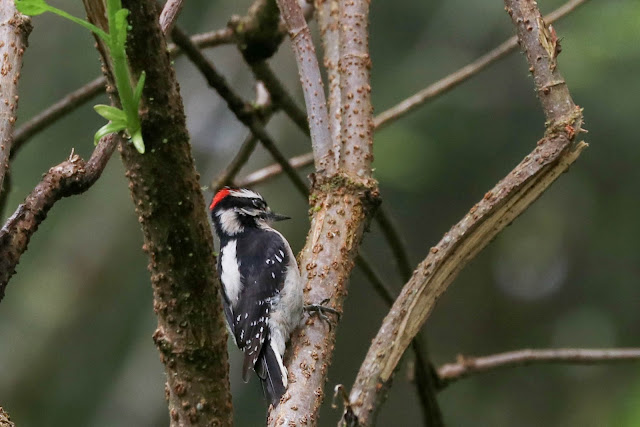 On the last morning of the yard birding challenge I finally did what I should have done before: I put on my coat, hat, gloves, binoculars and camera and set out to bird the backyard.

I was quickly rewarded with a new yard bird in a mixed flock, a Hermit Warbler!  I managed this photo while Jacob ran from his home office in the front of the house to the back of the back yard.  He missed it. 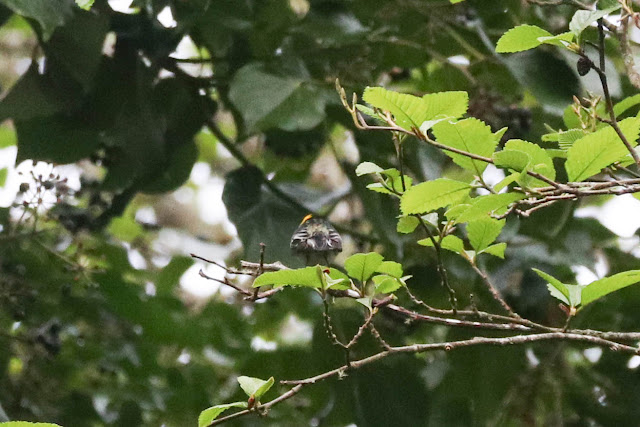 Quality photo of a Hermit Warbler

A Brown Creeper flew in to creep on our spruce tree while Dougie the Douglas squirrel ventured out on the edges of the branches. 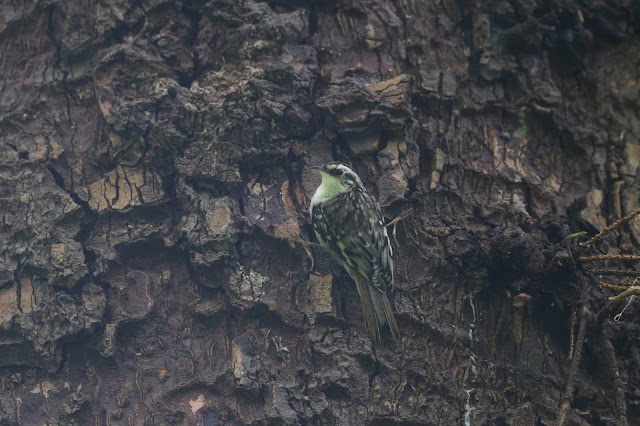 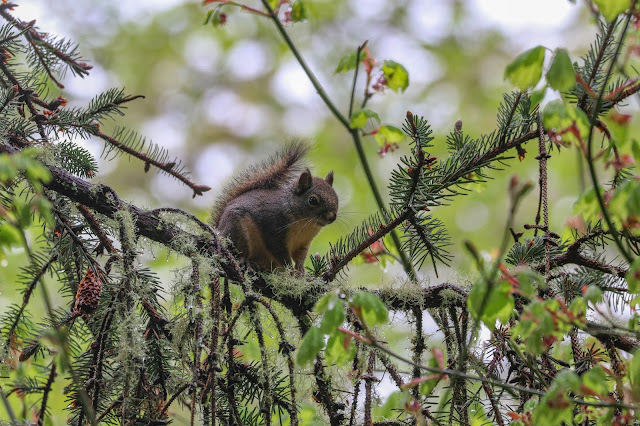 A singing Wrentit was my final addition to the yard challenge list which I ended with 54 species since March 26th (or whenever I said it started).  52 species in April alone!

Yesterday morning I decided to try the same approach.  A mixed flock held my first Warbling Vireo of the year along with Pacific-slope Flycatchers, and many Orange-crowned and Wilson's Warblers. 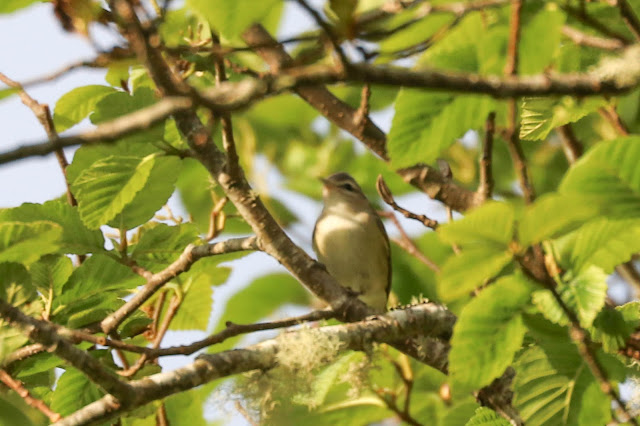 I went back inside to make a bagel and soon after a couple of Cackling Geese flew by, a new yard bird!  Both looked a bit haggard. 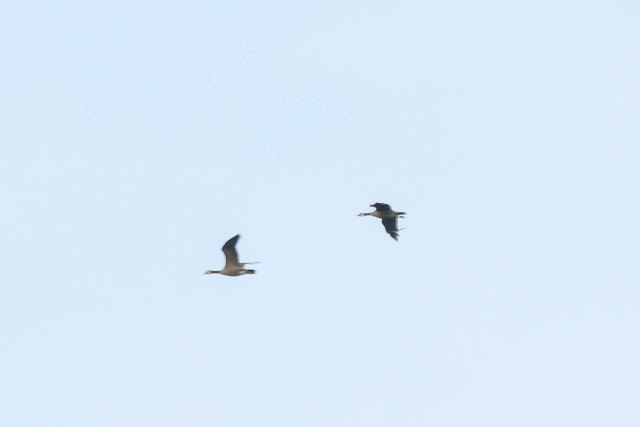 In the afternoon I did some more yard birding and a flock of Greater White-fronted Geese flew over.  ANOTHER new goose for the yard. 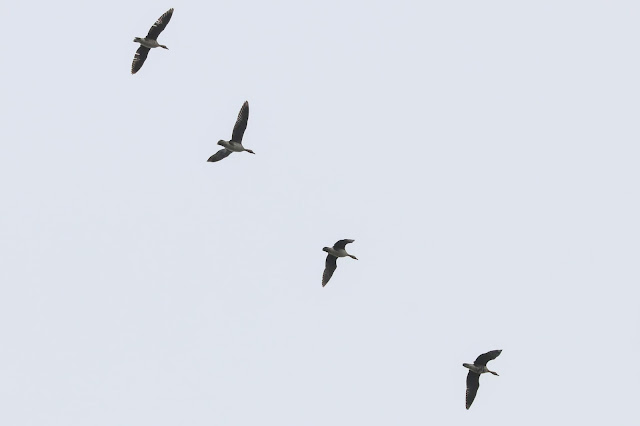 Awhile later a Black-throated Gray Warbler landed in the spruce, perching nicely for us. 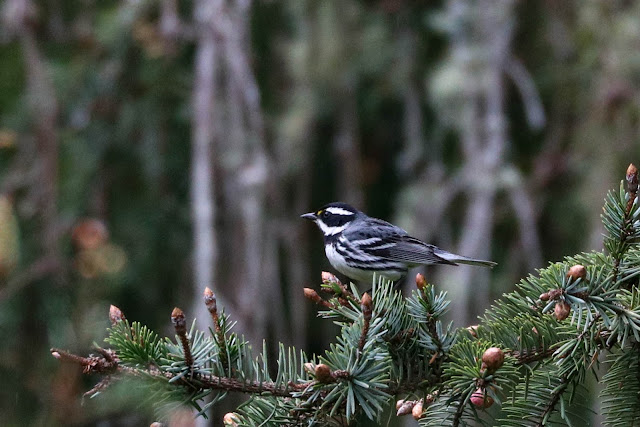 With two new yard birds on the first day of May I think I'll keep up this backyard birding thing.  I'm extremely lucky to have this yard and habitat surrounding me and I am so grateful we decided to buy this house a year ago. It's been a game-changer.  Health and sanity to you all. 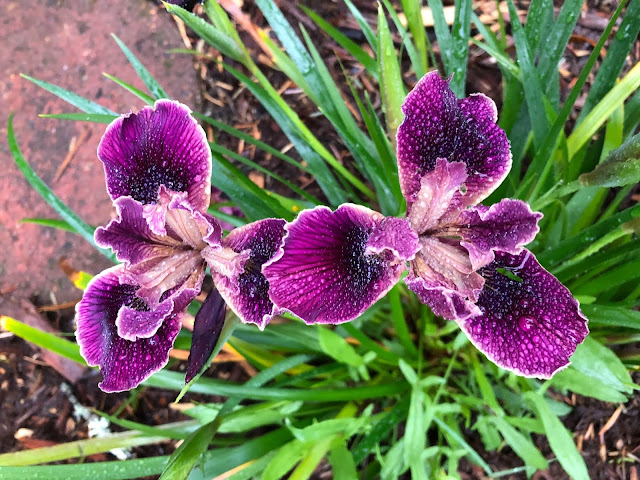