Last week I decided to head south on 101 for a couple hours to see what I could find in the tiny bit of Douglas County that runs along the coast.  It's a fairly large county, over three times the size of Lincoln by area (eleven times the size of Multnomah!), yet not heavily birded. 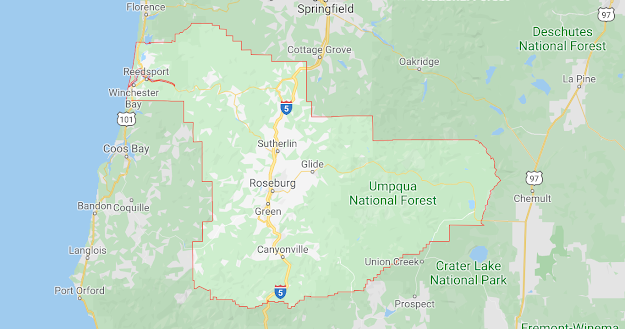 My eBird checklists in the county prior to last week were all from driving to Coos Bay with Audrey in 2017 to chase the King Eider and all of the Mallards along the way.  My county total was 15.
I made one stop in Lane County where there is a view of Lily Lake, the surrounding dunes, and the ocean, and randomly added three birds to my Lane list.  Continuing south I missed the Douglas County sign as I was busy running over an already dead beaver.  Yay.
My first stop was the parking lot next to the closed Carter Lake campground.  A Hermit Warbler was singing low and in view for once. 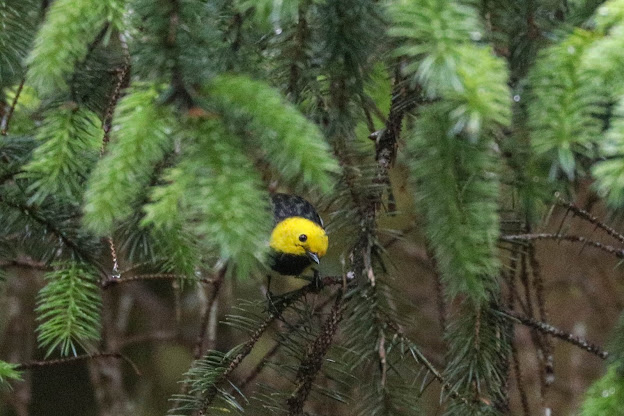 This tiny parking lot yielded 8 county birds total, all expected forest species.  A bit further south is the Carter Lake boat ramp where a nice fisherman told me where I could find both Osprey and Bald Eagles.  While he was talking an Osprey was flying overhead. 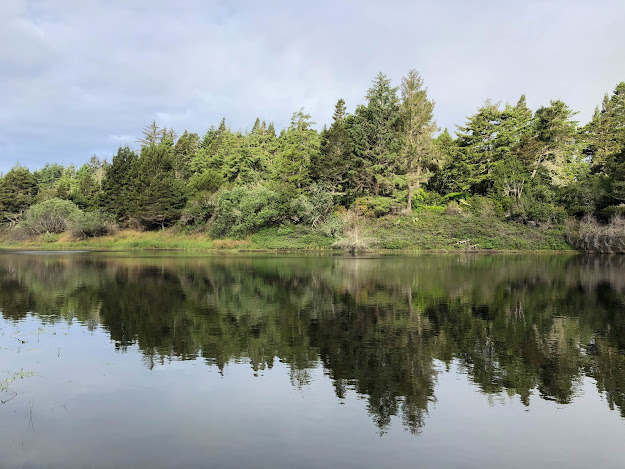 This spot gave me another 8 county birds including Olive-sided Flycatcher, Purple Finch, and Orange-crowned Warbler.
South of Carter Lake but on the east side of 101 is Tahkenitch Lake, a rather large and spread out lake with lots of fingers. 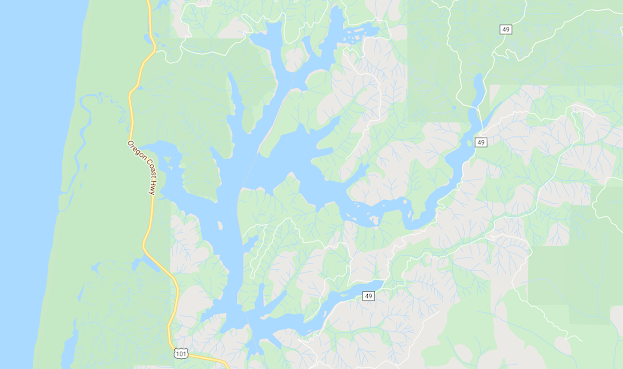 I stopped at both the boat launch and the "landing" along 101 adding a few more birds and one joke from a fisherman:  "does that camera find the big ones?"  I hope it was fish joke. 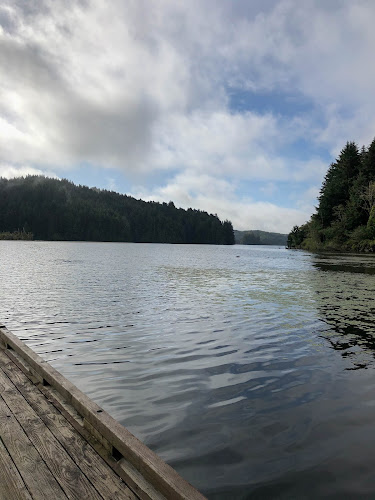 Next up was Fivemile Road which is a logging road that winds through an old clearcut then into woods and down to the southern part of Tahkenitch Lake. 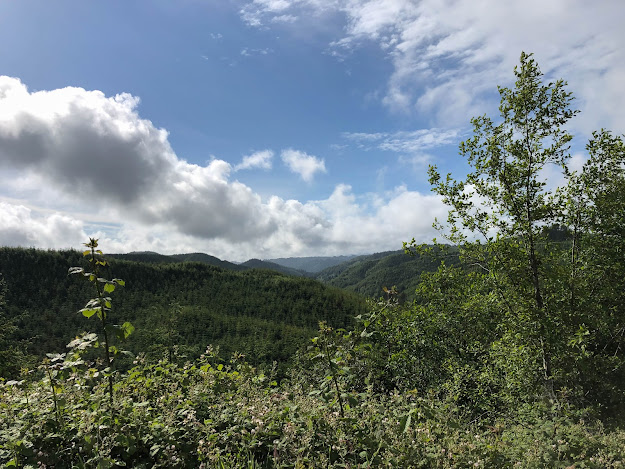 The first birds I saw were Band-tailed Pigeons, my 21st new county bird for the day. 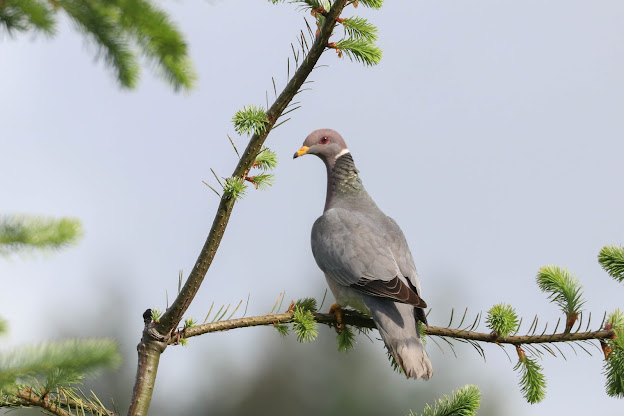 I could tell immediately that I liked this road.  It had all the important qualities that a good birding road should have:
1. It was birdy
2. There were good views
3. There was no one else using it
4. It was not creepy 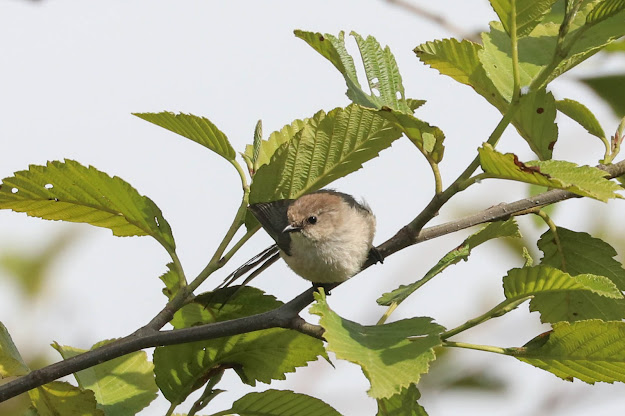 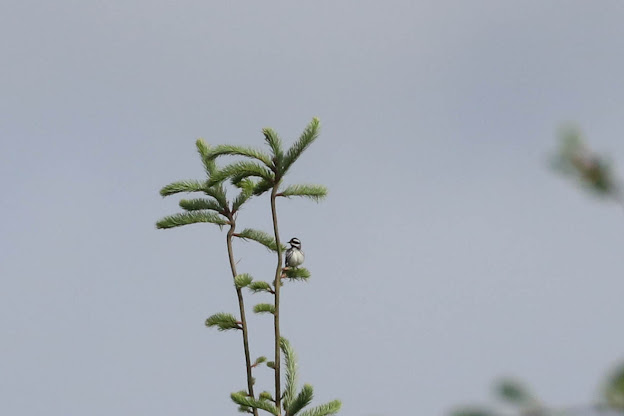 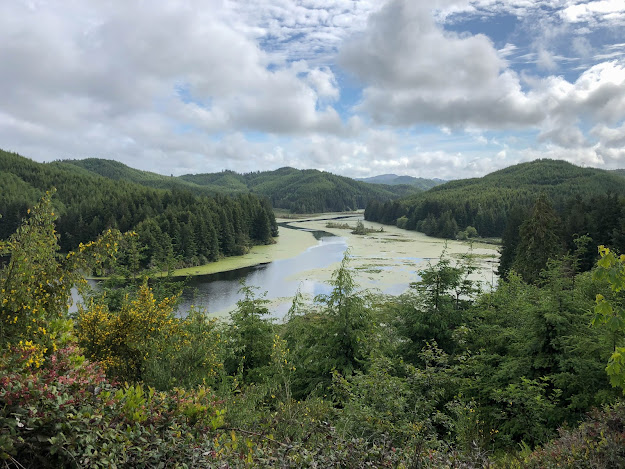 At one point I was wandering around in the road looking for a couple of singing warblers when I noticed this giant worm.  It was so impressive I took a photo and showed it to Jacob later.  He said um, that's an intestine, not a worm.  Hmm. Still impressive. 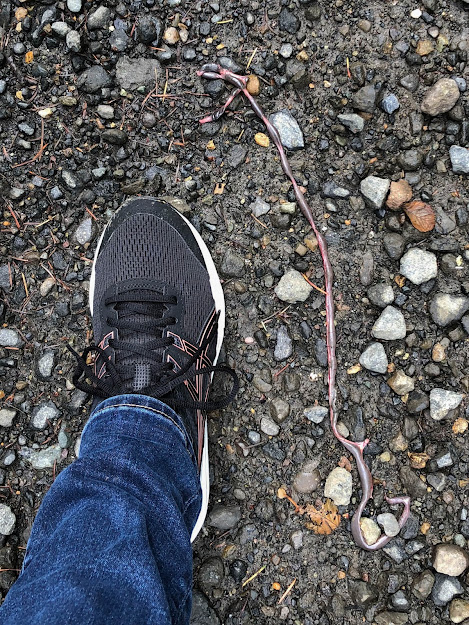 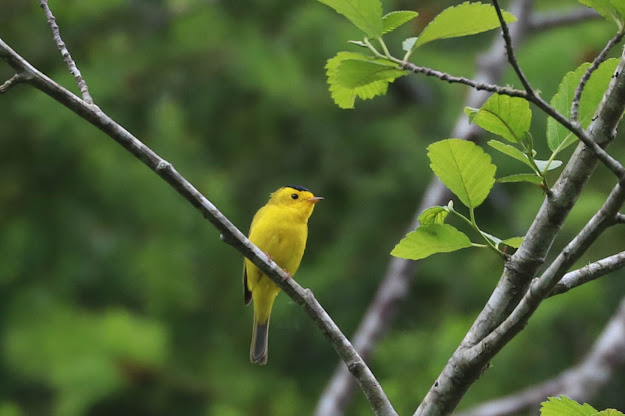 Wilson's Warbler wondering why I am so fascinated by intestines
The road eventually meanders down to the lake level at Mallard Creek.  This spot was very birdy and I got out and wandered around a bit.  Calling Virginia Rail, Wood Ducks, Red-winged Blackbirds, a Marsh Wren, and Common Yellowthroats were nice. 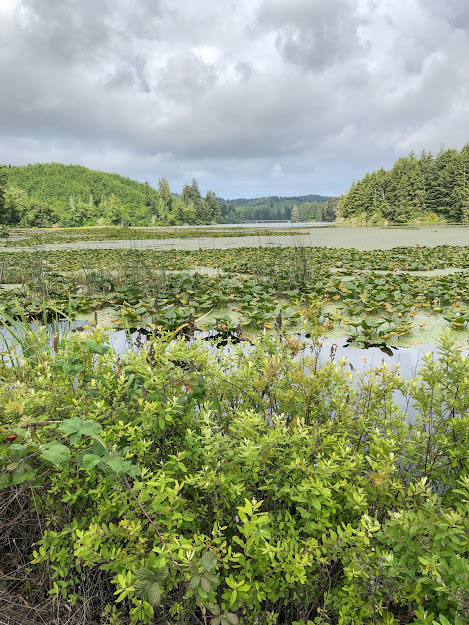 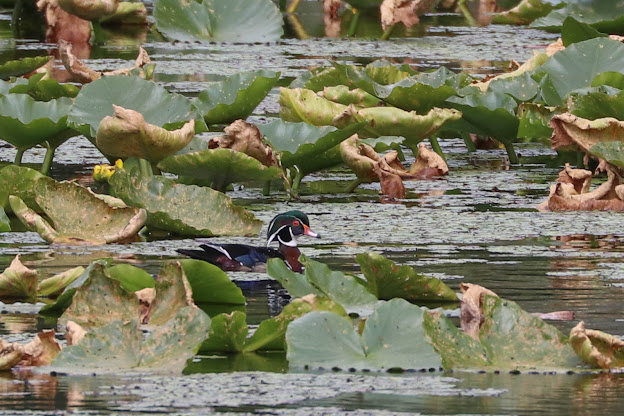 Wood Duck
The road winds through more trees with occasional lake views before it hits Leitel Creek, another open area that was quite birdy. 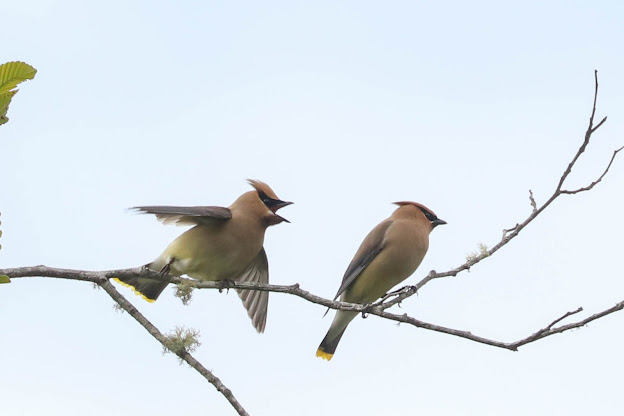 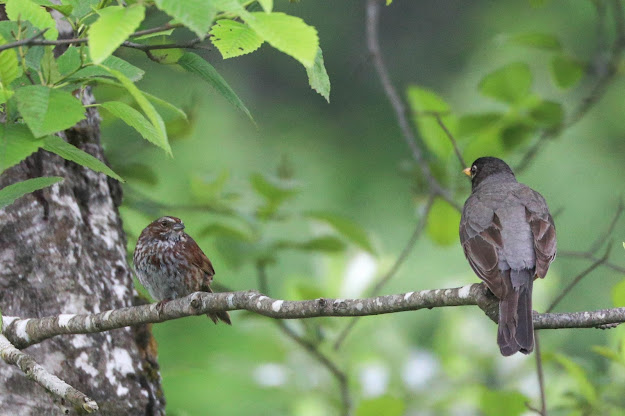 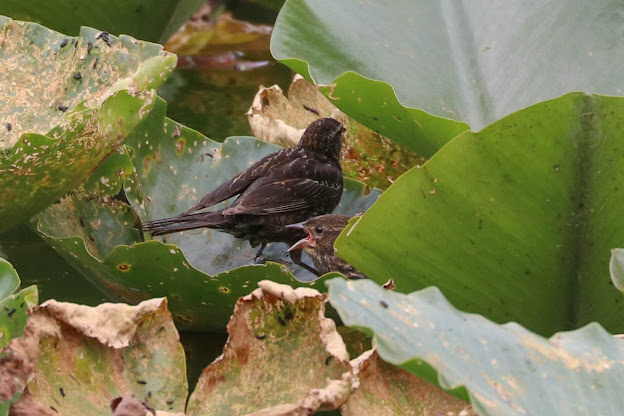 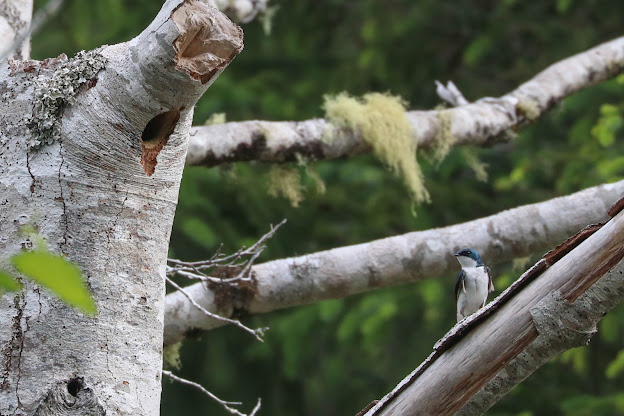 Tree Swallow by nest hole
I decided this was a good spot to turn around so I would have time to bird the rest of my planned stops.  This was by far my favorite birding area of the day though.  Before leaving the area I walked down a gated side road to relieve myself and enjoy this view: 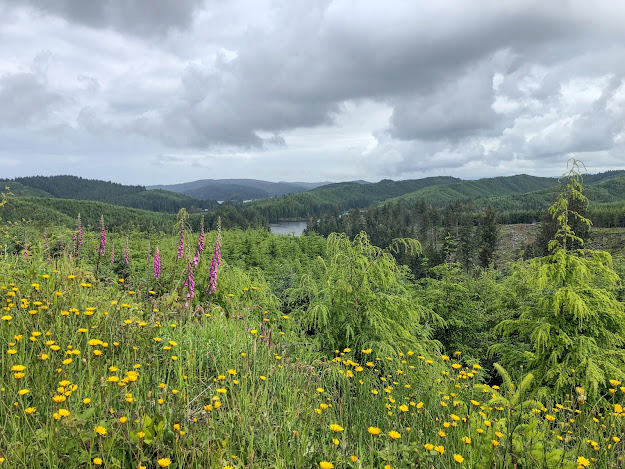 I should also mention that I realized near the intersection of this road and Highway 101 is where my friend Kayla found a Red-headed Woodpecker in a clearcut last summer while driving highway speeds. I am still amazed by this feat and wish I had been able to chase it without adding four hours to my drive back to Portland for work.
Next up I began looking for a spot to pull over and eat my lunch bagel and chose a small dock in the town of Gardiner.  Two Great Egrets were standing in the mud and putting them in eBird showed them to be "rare."  Apparently they are not common in June in this area. 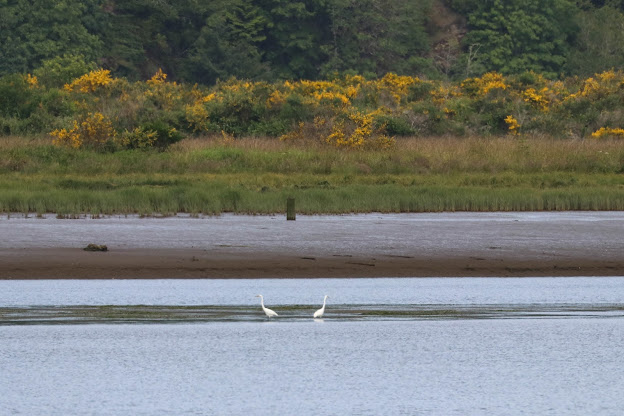 After I ate I drove over to Stables Road that runs between the Umpqua River and some ponds.  A pair of Black Phoebes was nice along with Purple Martins and more rare egrets. 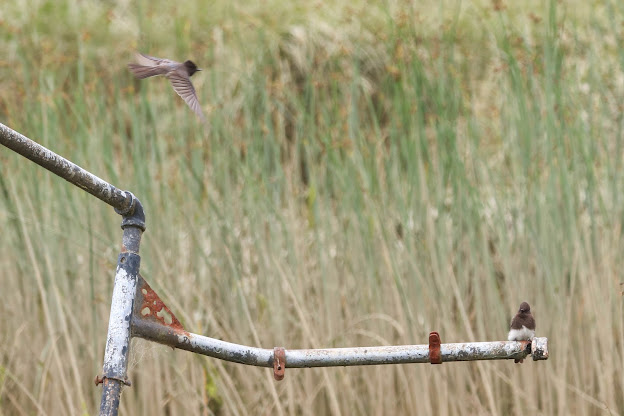 Next I headed south past Winchester Bay to Salmon Harbor Drive, then turned onto the sandy road at Ziolkouski Beach Park.  I walked part of the road because sand freaks me out sometimes and watched a couple of turkeys nibbling on plants in the campground. 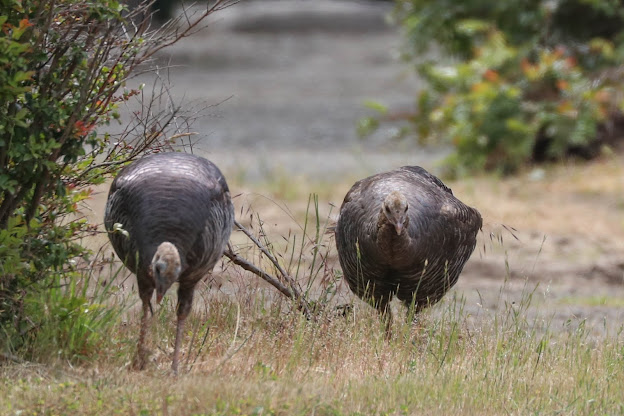 This area is very popular with ATV enthusiasts because of all the sand dunes that are open to that sort of thing.  Salmon Harbor Drive even has a side lane exclusively for ATV's.  This area also give me a very strong "merica" vibe that makes me extremely uncomfortable.
Anyway, Salmon Harbor Drive also had a puddle that attracted a bunch of county Cliff Swallows that were collecting mud for their nests. 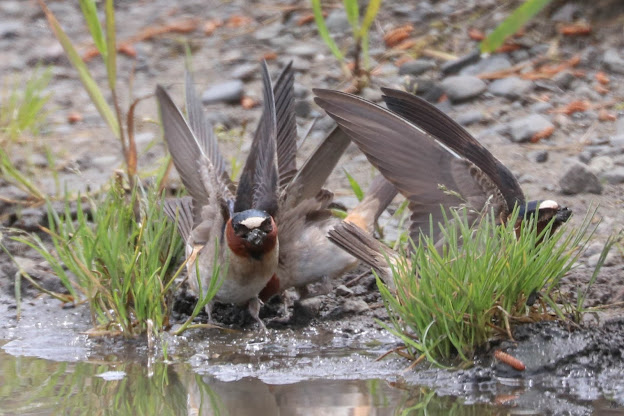 I drove around the Salmon Harbor Marina where I added California Gull and Surf Scoter to my county list.  Pigeon Guillemots were lounging on one of the docks which is not how I normally see them. 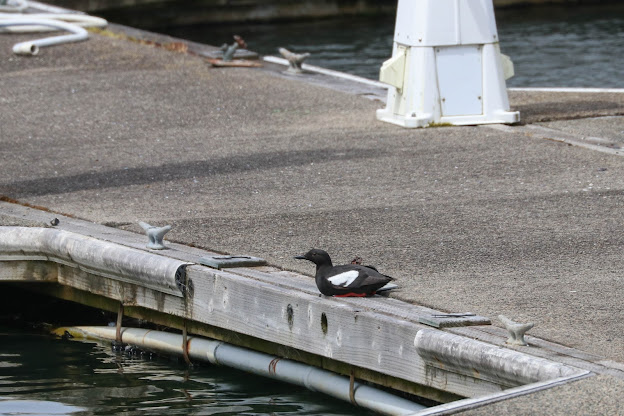 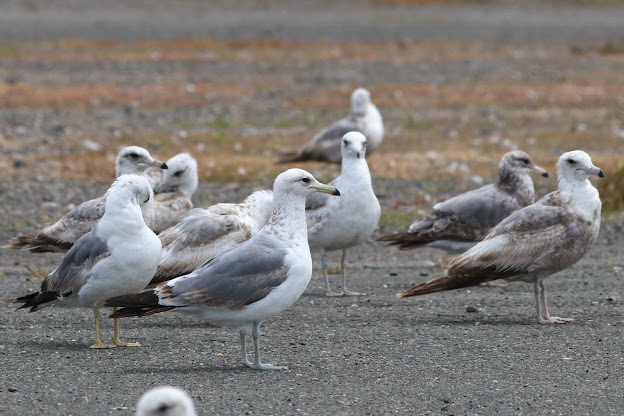 California Gull pile
After the marina I began the drive back north and decided to stop by some train tracks where there was a large field of tall grass.  I was thinking Savannah Sparrow but got Killdeer babies instead. 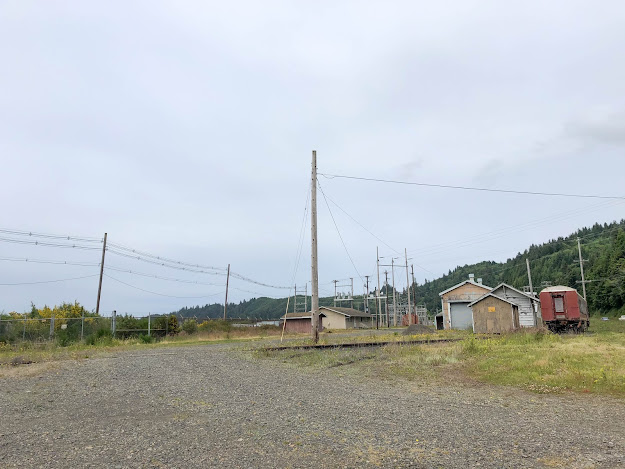 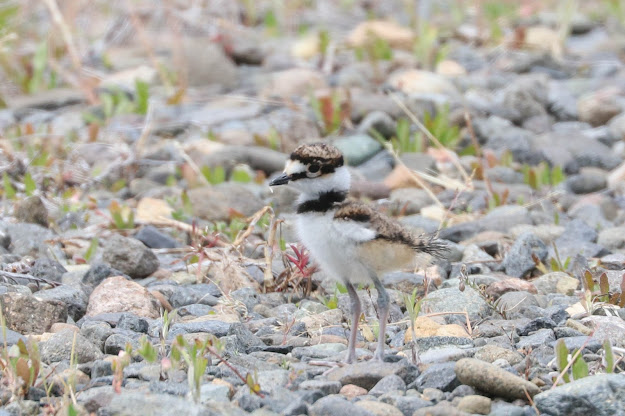 On my way back north I was psyched to see a small Black Lives Matter protest of about 40-50 masked and socially distanced people in the middle of Florence on 101.  Quite the difference from Douglas County with all it's American flag-waving pickups, and worse, the rebel flag-waving pickups.
Anyway, I added over 50 species to my Douglas county list and finished with 61 for the day.  For the record, I brought all my own food, only peed outside in the clearcut, and bought gas in my own county.  It was a fun little trip!
Email Post
Labels: Band-tailed Pigeon Black Phoebe Black-throated Gray Warbler Bushtit California Gull Cedar Waxwing Cliff Swallow Hermit Warbler Killdeer Pigeon Guillemot Wild Turkey Wilson's Warbler Wood Duck