In an effort to make my August birding a little more interesting I decided to try a "big month" in my Lincoln City 5MR.  Last year in the same time frame I had 76 species in my LC 5MR and only 72 in my Vancouver 5MR despite doing the 2019 5MR Challenge there.  The vague goal for my big month is 100 species which may need to be adjusted.

The first day of August all of my birding was done in the back yard. Pine Siskins had recently taken over the feeders often attracting some Red Crossbills as well.  I tried to get a photo of a young crossbill (below, right) next to a siskin (below, center) as they can look remarkably similar.

Life was still normal when I took that photo.  A minute later I looked over at the water feature where a few crossbills had flown to drink.  One male had bright white wingbars that made my brain explode as I shouted for Jacob to come look. 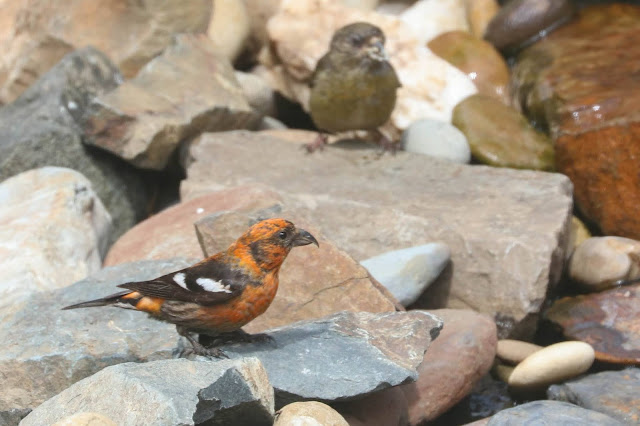 A White-winged Crossbill in August on the Oregon coast is not a thing.  I was convinced it had to be some weird Red Crossbill variant but after consulting birder friends and the internet it became apparent that it was in fact a White-winged. An incredible yard bird any time of year but especially in the summer. This Red Crossbill was unimpressed: 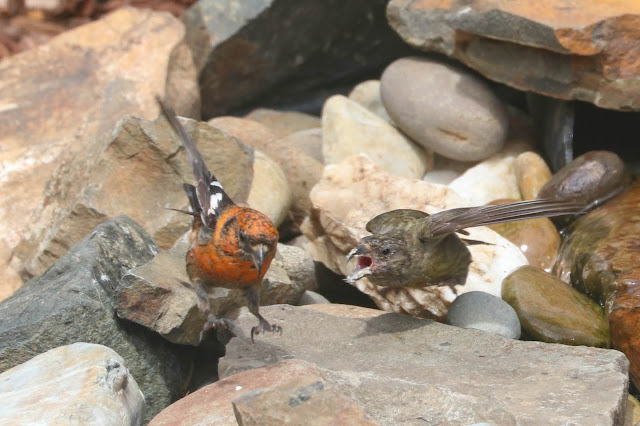 Despite not leaving the yard that day I managed 35 species to kick off the big month. The following morning the siskins and crossbills were back but we have not seen the White-winged again. 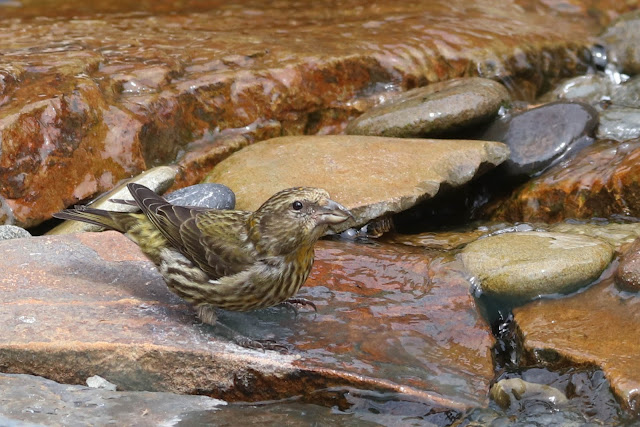 In the afternoon we left the 5MR to chase the Bar-tailed Godwit south of Newport.  It took a lot of trudging through sand before we found it but finally there it was in a pile of Whimbrels as advertised. 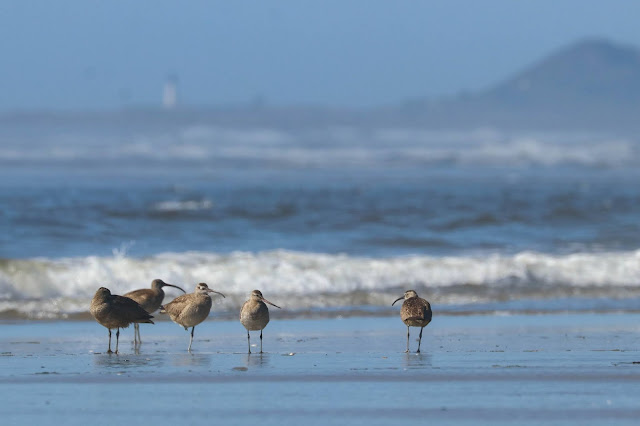 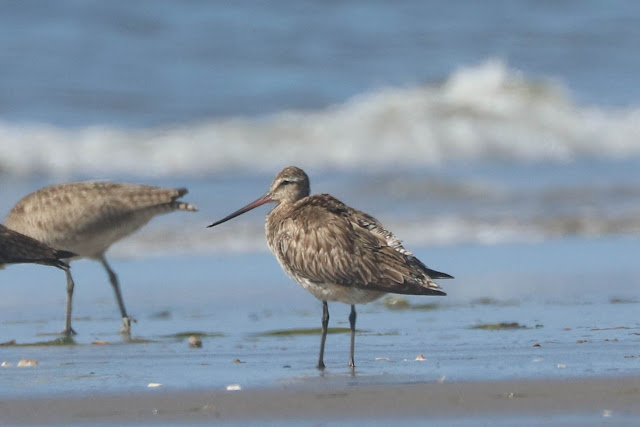 A great state bird for me and a lifer for Jacob!

Another morning we hit up the tide pools in our 5MR but it was too foggy to see many birds.  Plenty of little things to look at though. Monterey dorid, purple sea urchin, and woody chiton. 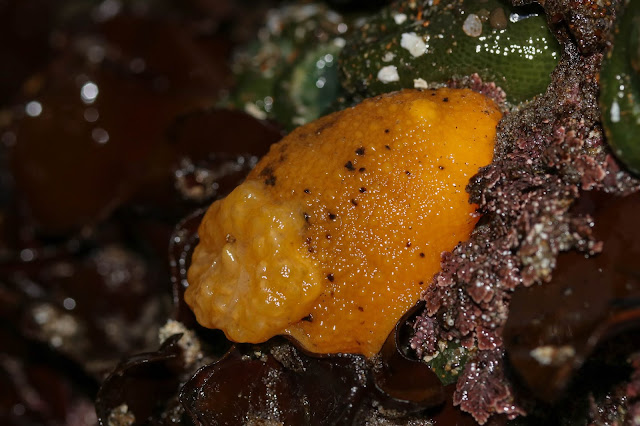 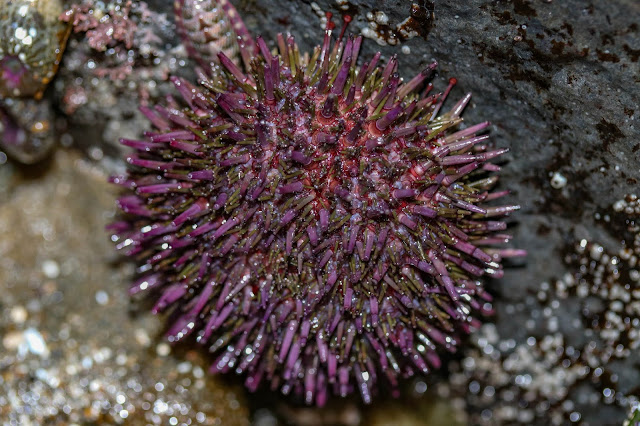 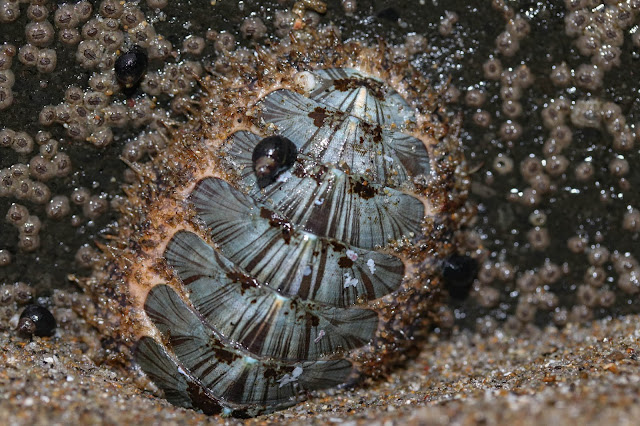 We hit up the sewage ponds mid-day one day and were rewarded with some shorebirds finally.  Mostly Least Sandpipers but also an identifiable dowitcher! 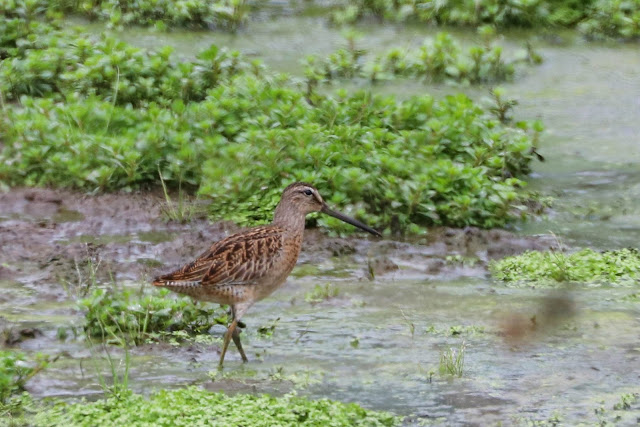 Short-billed Dowitcher, another lifer for Jacob.  We also had Hooded Mergansers (my first at the sewage ponds) and a Cinnamon Teal. 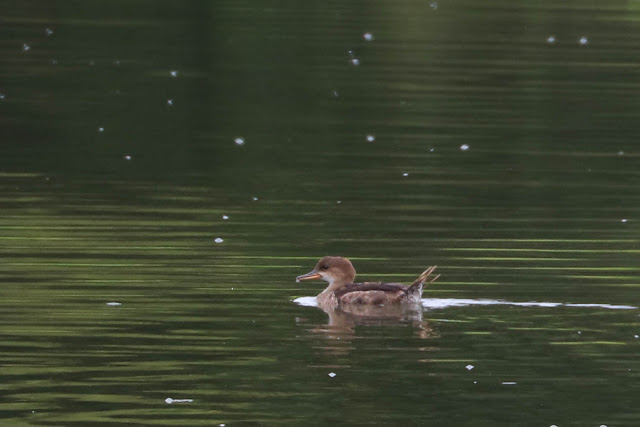 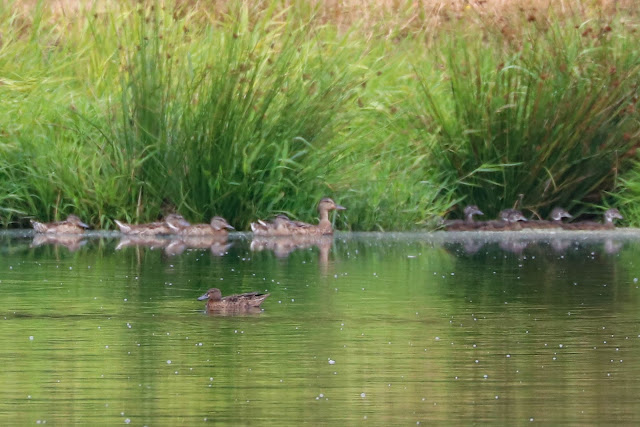 One morning I headed to the Salmon River Estuary in the northern part of my radius.  Highway 101 cuts through the estuary and has tons of room to pull off and park so this is a good place to start. 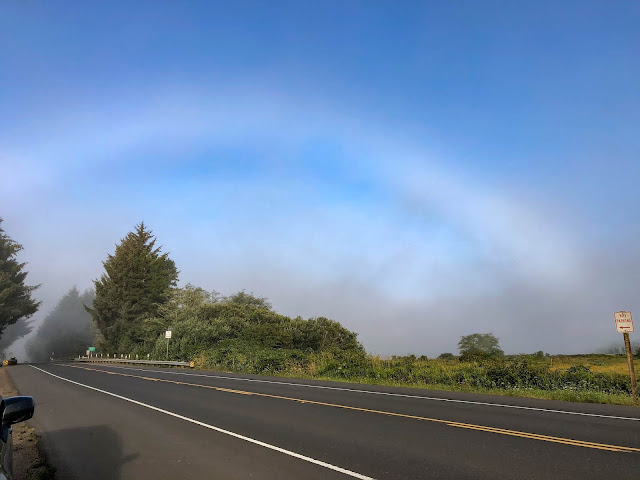 This is the most reliable spot for Willow Flycatcher in my 5MR and I also added my only Red-tailed Hawk and Red-shouldered Hawk so far.  Next I drove down Three Rocks Road to Knight Park where there is a small dock and boat launch.  A flyover flock of Evening Grosbeaks was a nice surprise. 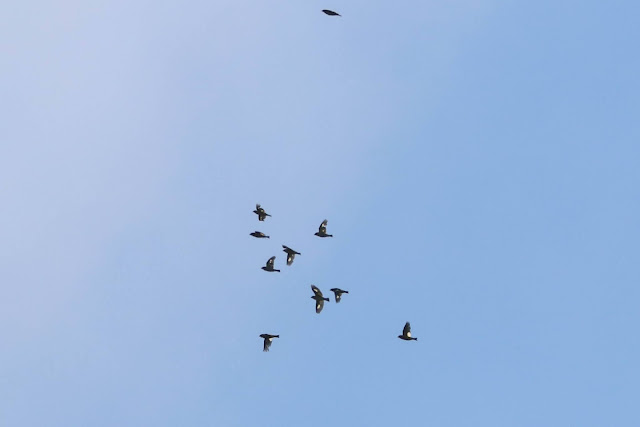 A family of Downy Woodpeckers was hanging out in the parking lot trees along with a young Swainson's Thrush and a couple Black-throated Grays. 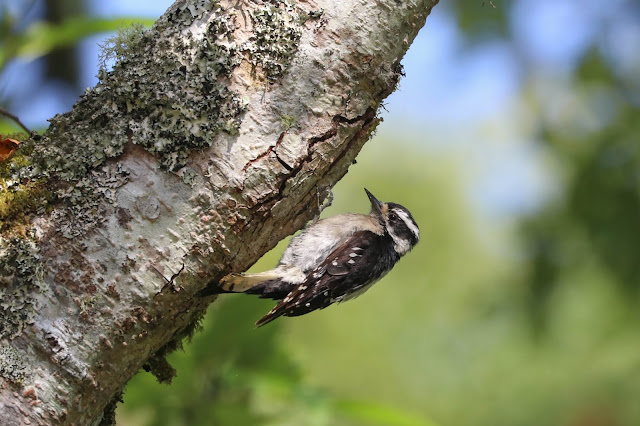 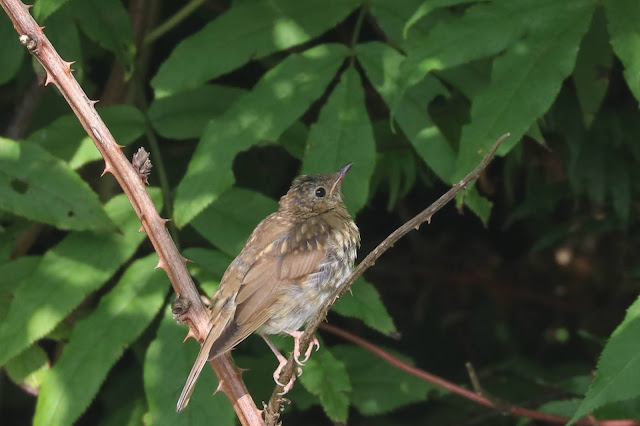 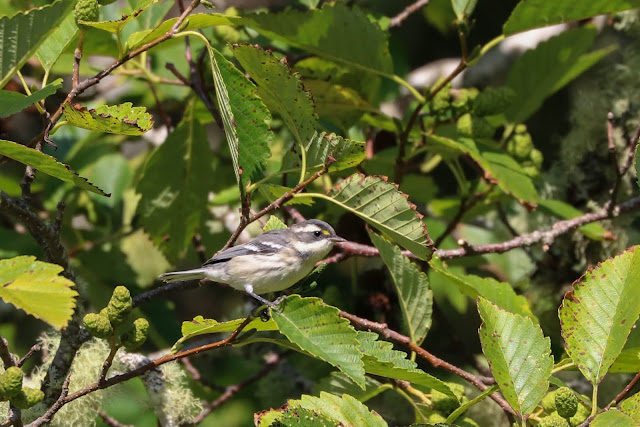 A group of Great Egrets flew over, one with a fish in its bill. The tide was low so I tried to poke around the little dock to see if it had anything interesting growing on it.  I recently learned that nudibranchs and things will use dock fouling though this dock being in the river estuary is not exactly ideal. I need to find one in a bay or something but I don't think there are any in my 5MR. 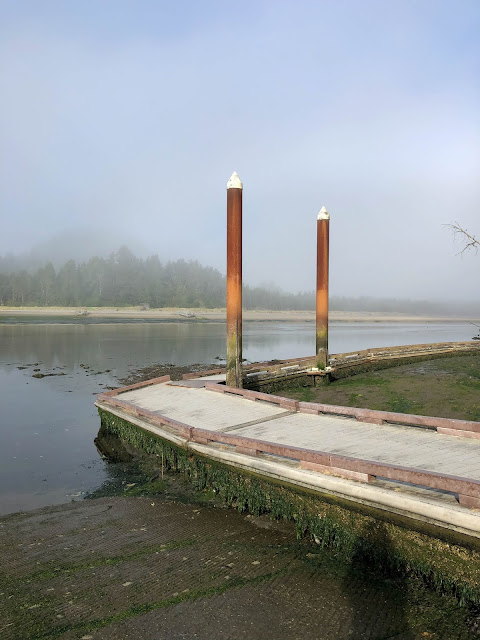 The estuary was looking great for shorebirds and I had some Greater Yellowlegs and flyby peeps.  I'll be back with my scope soon!  From Knight Park I drove down Savage Road to the end where there's another view of the river.  I've been trying to divide this area into new hotspots because one hotspot for the whole area is ridiculous.  Also, on this trip I learned that most of Savage Road is in Tillamook County (from about halfway up the hill to the ranch all the way to the end).  Who knew? 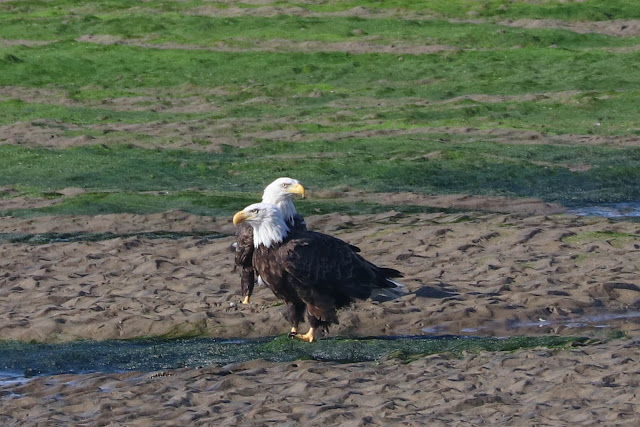 My final stop on my estuary tour was back on Three Rocks Road where there is a nice pullout with good views of the area. The first bird I saw was a Long-billed Curlew! 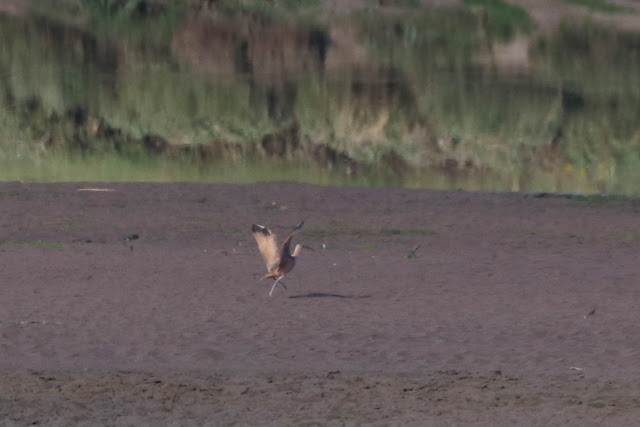 A bunch more peeps flying around reminded me I really needed my scope.

The week before I had set up my camera trap along a logging road and I was excited to pick it up.  Unfortunately it did not function at all, possible SD card failure.  At least we had some good 5MR birds on our hike to retrieve it. 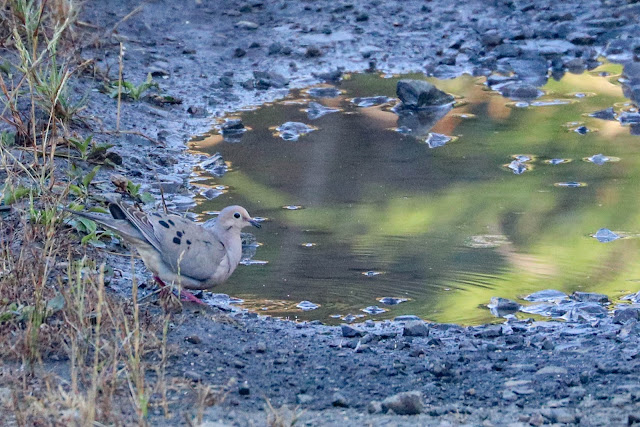 This is the only area I've had Mourning Dove in my 5MR so it was awesome that this one was drinking from this puddle.

Thanks to Jacob wanting to drive around early one morning and look for owls (fail) I managed to add Common Nighthawk and Virginia Rail to my week's list.  Week 1 of my Big August ended at 89 species!

Yesterday we went up to the clearcuts and I added a couple more, Western Bluebird and House Wren, so I'm sitting at 91 with a bunch more easy-ish ones left.  Looking forward to seeing what else I can find! Or what else will find our water feature...