August is over!  It was definitely not my favorite month ever but my 5MR big month helped keep me distracted. 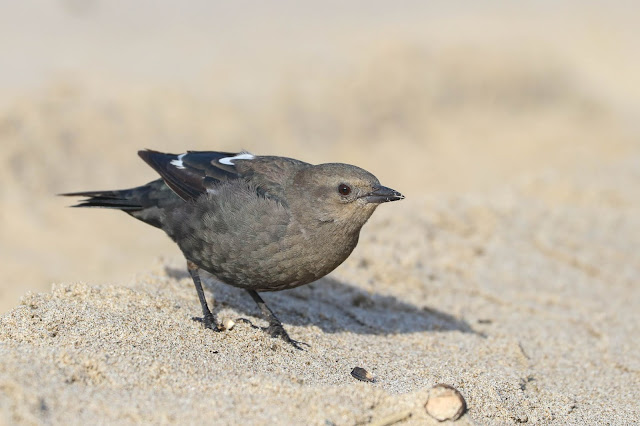 My strategy for the month was to bird all the different habitats in my 5MR with extra visits to spots with potential rarities.  Mainly, the beach, the river estuary, the clearcuts, the sewage ponds, and the yard. 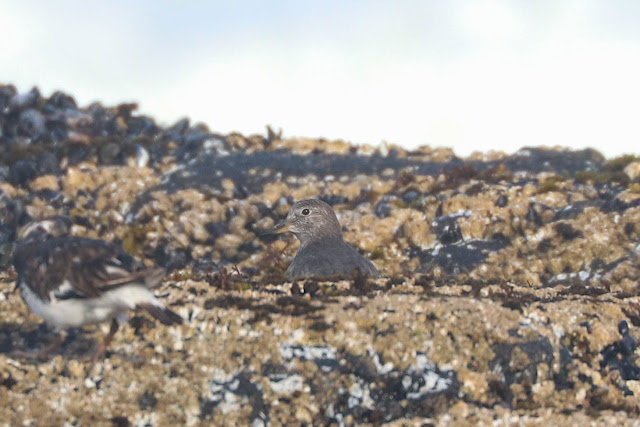 One morning we went out to the Roads End tide pools for the minus tide and the fog was ridiculously thick.  I had been hoping for some new birds but gave up that dream quickly.  Good tide pooling though! 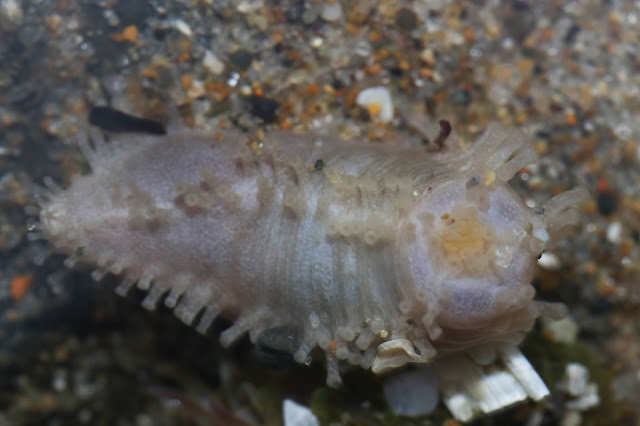 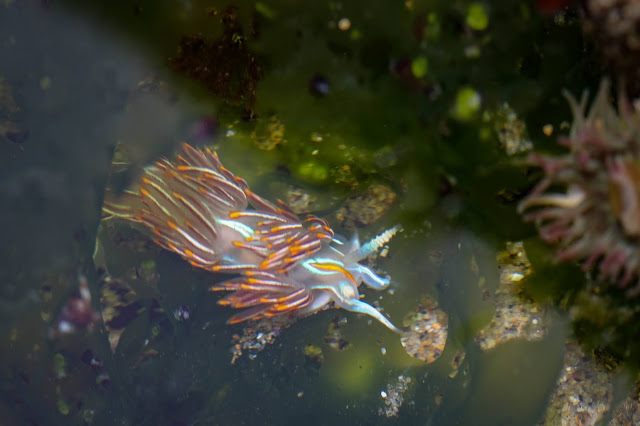 On the walk back to the car in the fog a bird suddenly appeared sitting on the beach.  A small gull!  It took flight and I fired off four photos before my camera battery died. 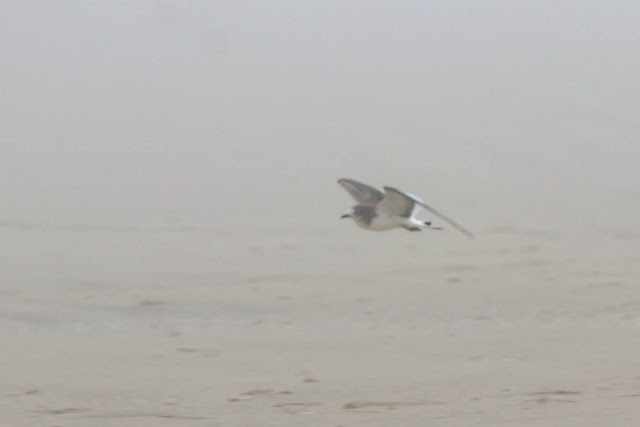 It disappeared back towards the tide pools where I was hoping it landed again.  No luck finding it but we did see my only 5MR Sanderling of the month a Western. 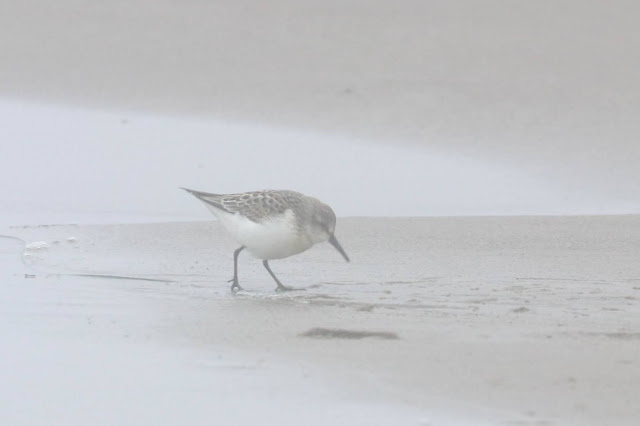 The Salmon River Estuary has been a solid birding spot for me this month.  Every time I visit I hear this young Bald Eagle calling from the middle of the mudflats and I think it's a shorebird for a minute.  Every freakin time. 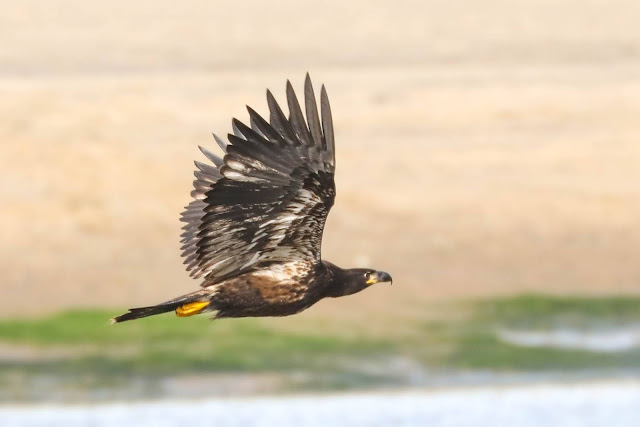 The trees near the boat launch have consistently held roaming mixed flocks of migrants and I finally picked up Warbling Vireo here.  Hermit Warbler was another nice surprise even though I didn't "need" it for the month. 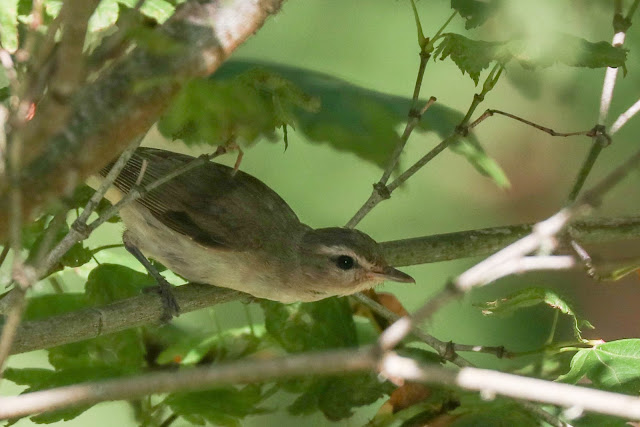 I had my only 5MR coyote for the month near here, on the hillside where a chat was singing all spring. 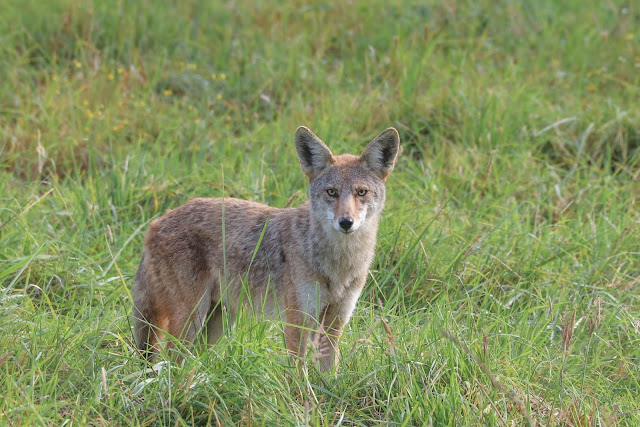 Last weekend Jacob and I were both awake pretty early so I suggested driving up to the estuary to try for Barn Owls.  I've tried a few times before with no luck but on this morning we heard one soon after getting out of the car on 101.  It was definitely flying around but we never got a glimpse in the dark.  A shooting star and great views of the Milky Way were nice bonuses.

Yard birds are good birds, though no other crazy rarities have shown up since the White-winged Crossbill.  A new flicker family visited a few times with a regular red-shafted dad and two intergrade kids. 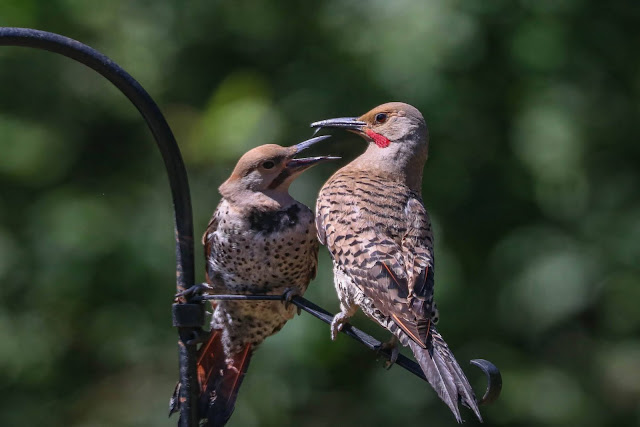 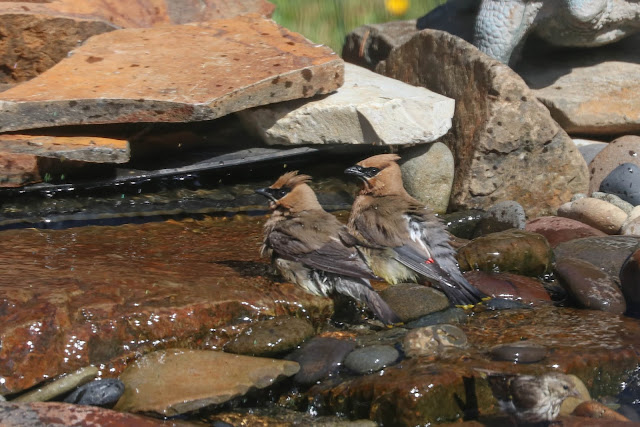 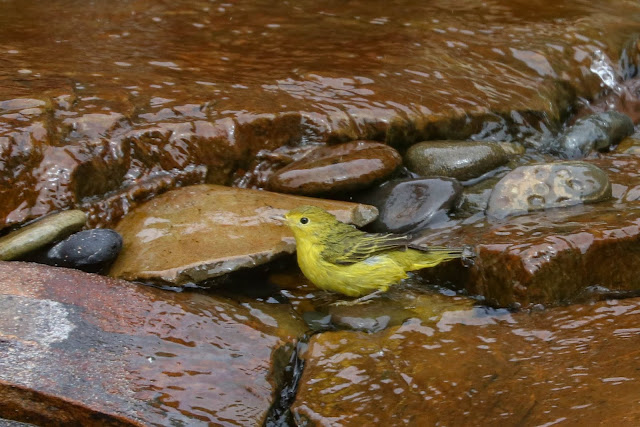 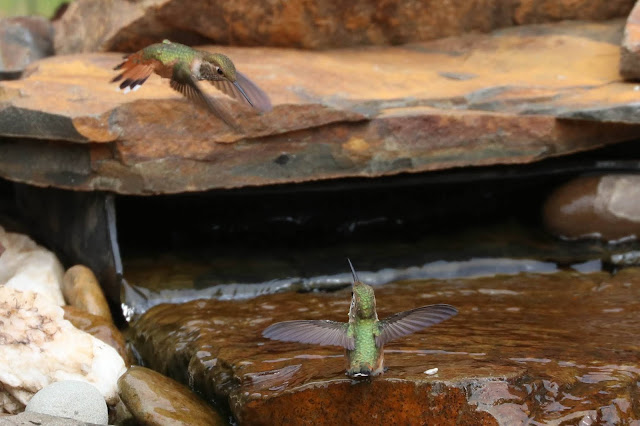 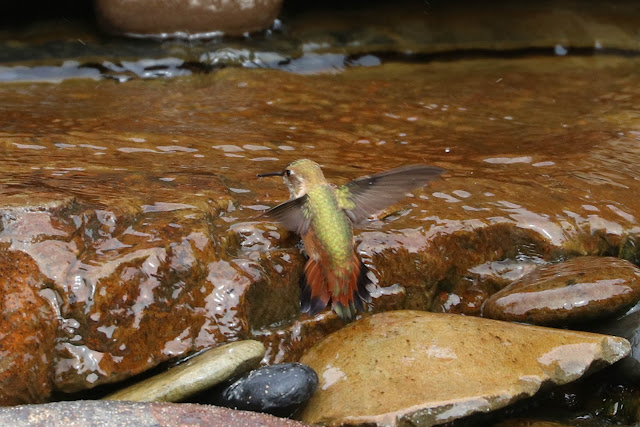 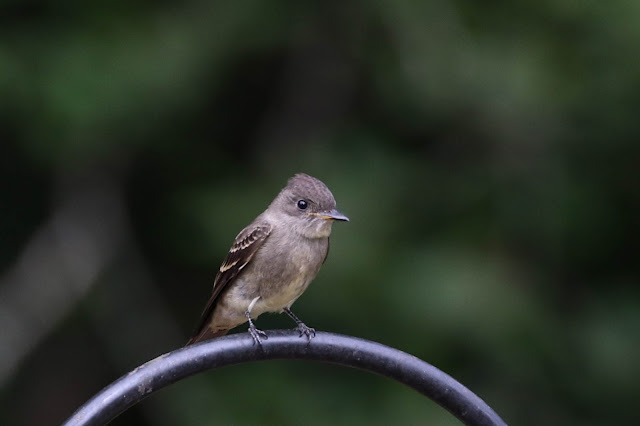 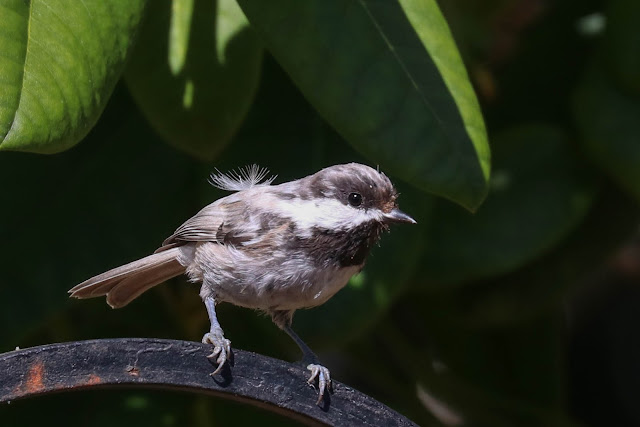 The clearcuts on the other side of the lake can be very productive and if logging trucks didn't freak me out so much I would have visited more often.  Jacob and I had one fantastic birding morning up there towards the middle of August. 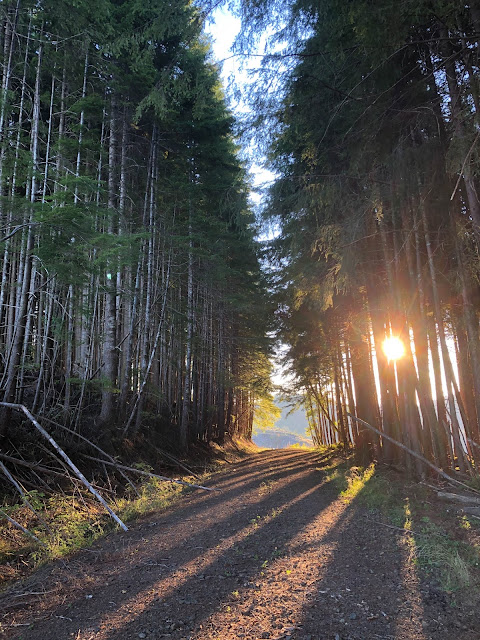 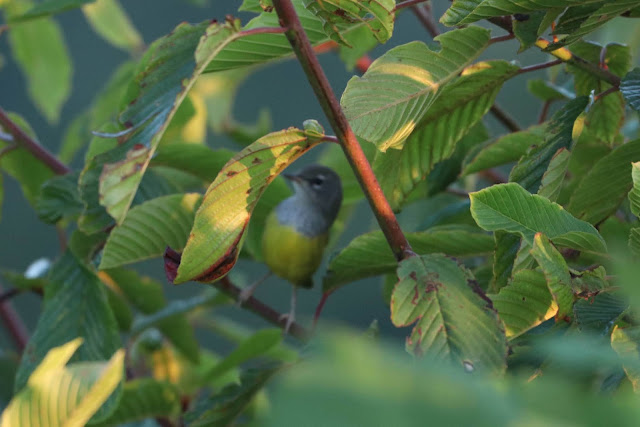 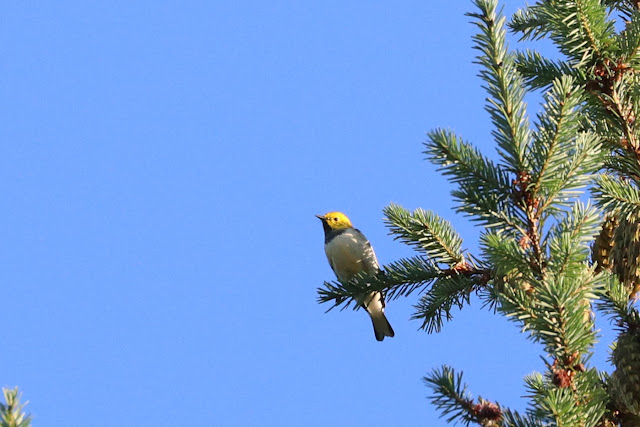 On our walk back down Jacob pointed out a sparrow that was not like the other sparrows.  A juvenile Chipping Sparrow!  A county bird for us! 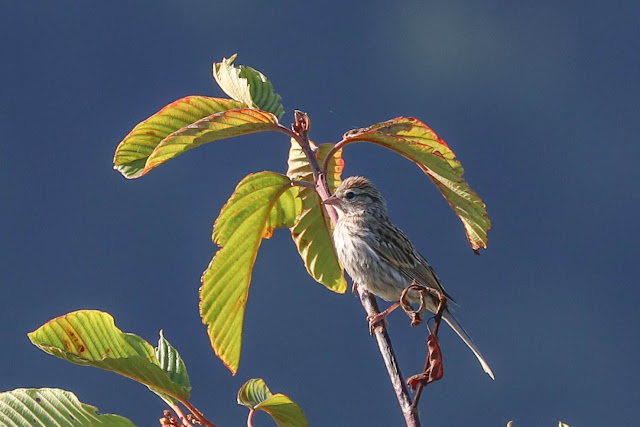 I was also happy to see a family of Purple Martins perched on a snag and am curious if they nested in the clearcuts here.

We could see a flurry of bird activity on an old side road that is now thigh-high grass and decided to check it out.  Out flushed an entire family of Mountain Quail!  No photos as they were too fast but it was pretty cool.

I made way too many trips to the sewage ponds in hopes of an exciting shorebird but all I managed were the common species: Leasts and Westerns, a Spotted, and Killdeer.  The Black Phoebe family that nested there finally returned and it seems the youngsters are all doing well. 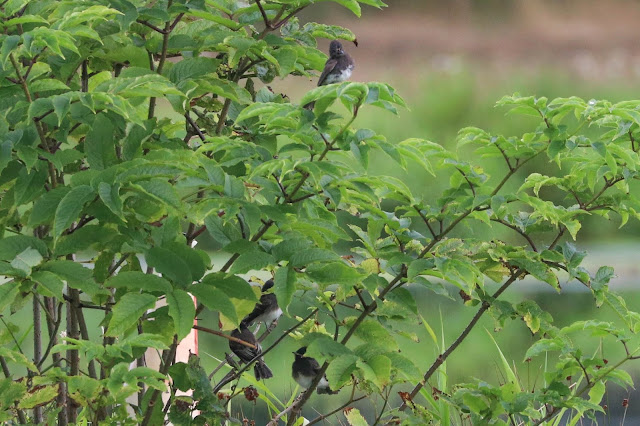 Four phoebes in a shrub 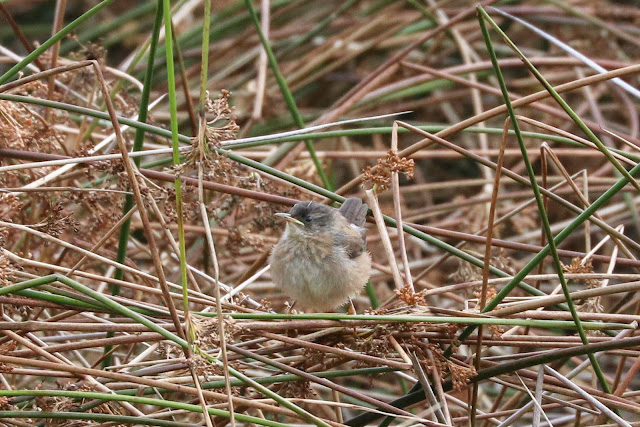 A bunch of nutria have shown up at the sewage ponds and the guys there have been trying to catch them.  I don't think it's working too well. 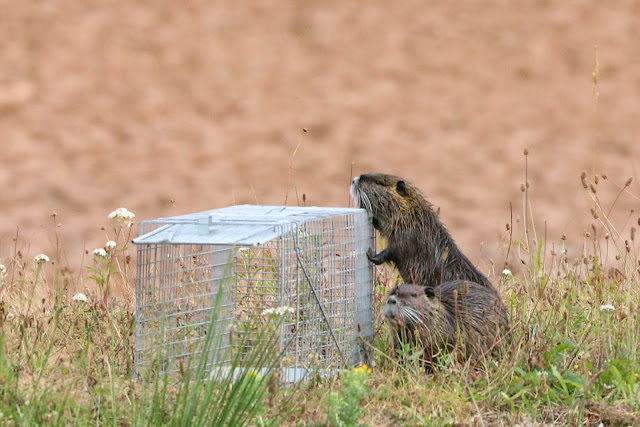 Yesterday I visited the sewage ponds after some uneventful birding at the estuary.  No new duck species, no new shorebird species, not much of interest.  I was walking back to make one last scan when I noticed a new bird in the mud with the robins. 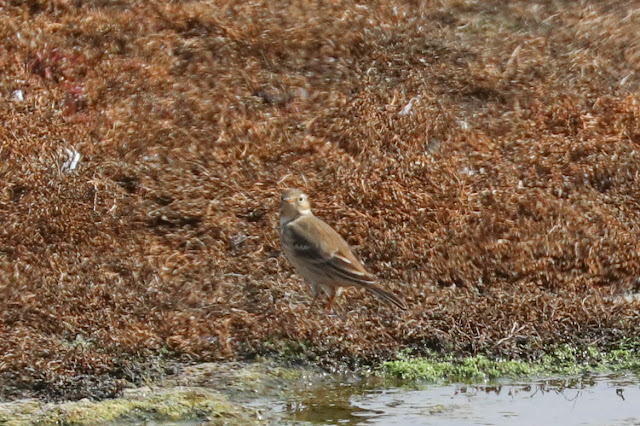 The second I raised my camera at it a crazy round of gunfire erupted from the east side of the ponds, scaring off most of the ducks.  After five minutes I decided to leave and the gunfire was still going.

I finished off my 5MR Big Month at 124 species, 24 more than my unofficial goal of 100.  Five species were completely new for my 5MR, four of which were county birds.  I could have tried harder but I think I tried exactly as hard as I felt like trying.  Note, this could also be applied to high school and college.

I spent a lot of time outside my 5MR both intentionally and unintentionally.  There were four lost days to car trouble back in Vancouver.  There was a day trip to Morrow County and another to Linn County, both finally over 100 species now. There was a drive down to Newport for the Hudsonian Godwit. 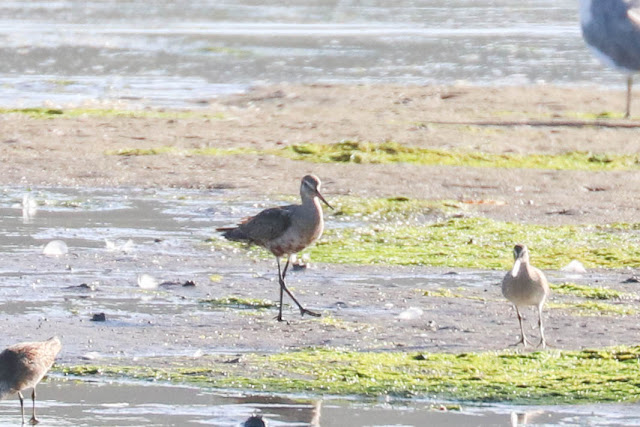 All of this 5MR birding has placed my Lincoln City 5MR only two species shy of my Vancouver/Portland 5MR.  Fun fun.

Hope you all had a good month!